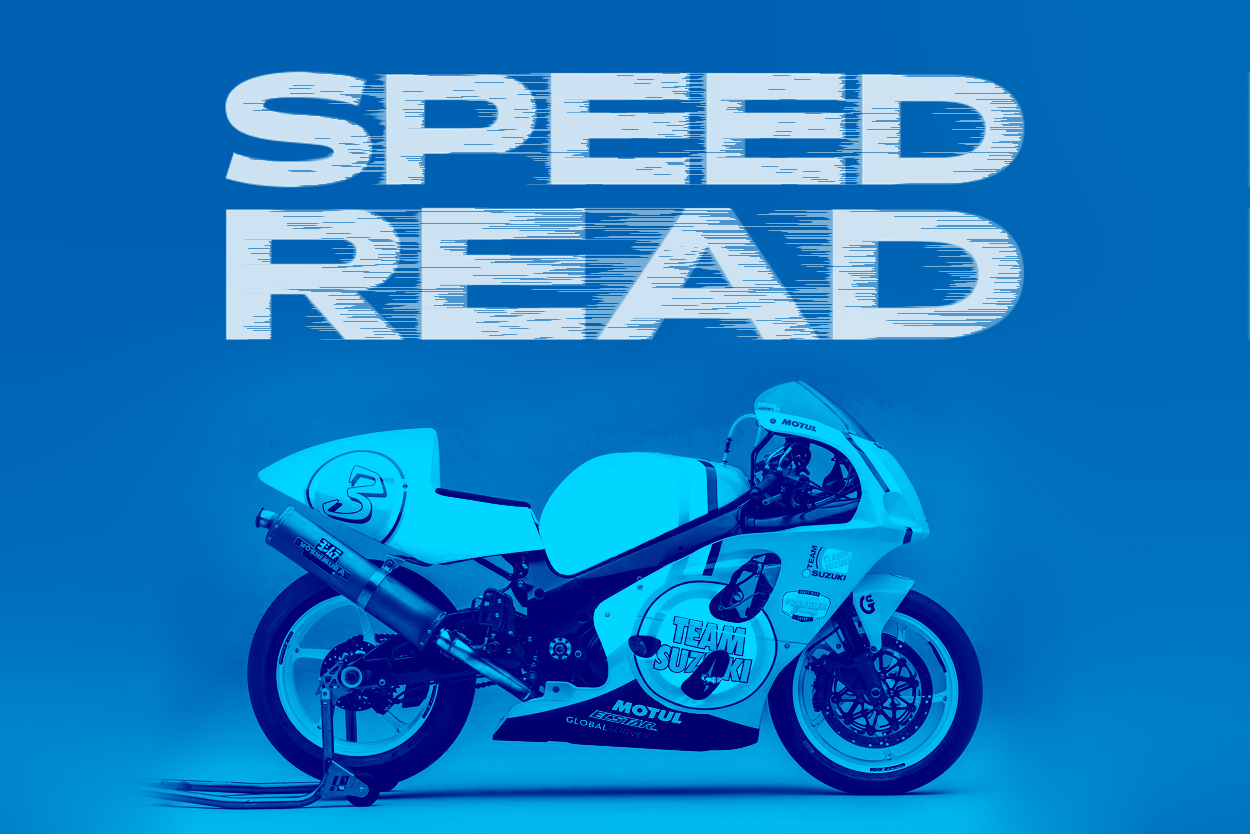 From one extreme to the other: a wild SRAD Gixxer built for classic racing, and a funky little SR250 that zooms around the streets of Barcelona. Plus news of Fonzie’s old Triumph up for auction, and a smokin’ hot Ducati Monster from Florida. 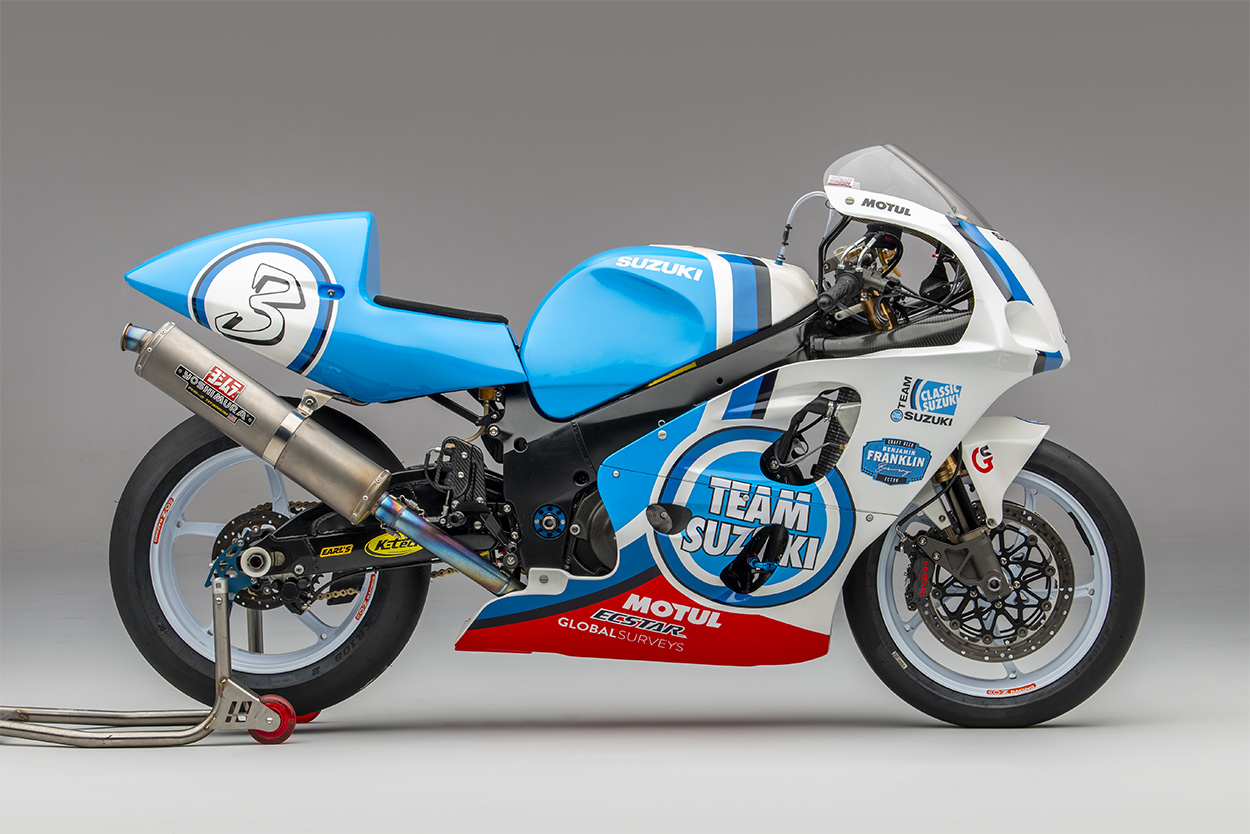 Suzuki GSX-R750 SRAD by Team Classic Suzuki TCS is one of the top classic racing teams in Europe, and we wish there were more outfits like them. They’re operated by Suzuki GB, who pull in help from racing specialists—and then employ leading riders to pilot their amazing builds.

TCS first caused ripples when Michael Dunlop rode an XR69 replica at the Classic TT in 2013, and last year they wowed us with a stunning road-going Katana. 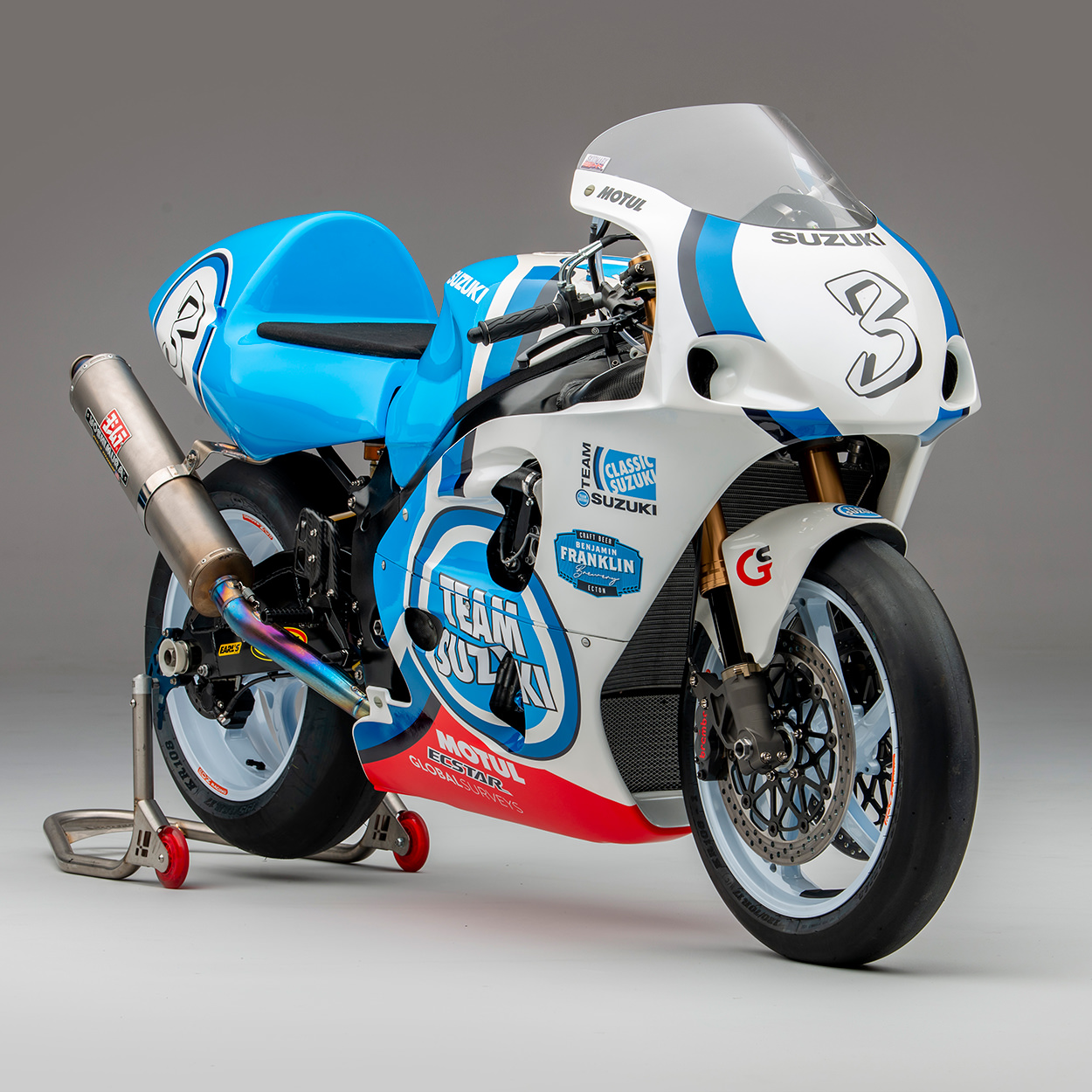 This latest treat is strictly for the track: a 1996 GSX-R750 SRAD built up for classic racing events, including the Classic TT again. And a lot of Brits are going to be happy. As TCS point out, “The SRAD epitomizes 1990s sportbike-obsessed Britain, in part thanks to its bulbous seat unit and now-iconic silhouette.” 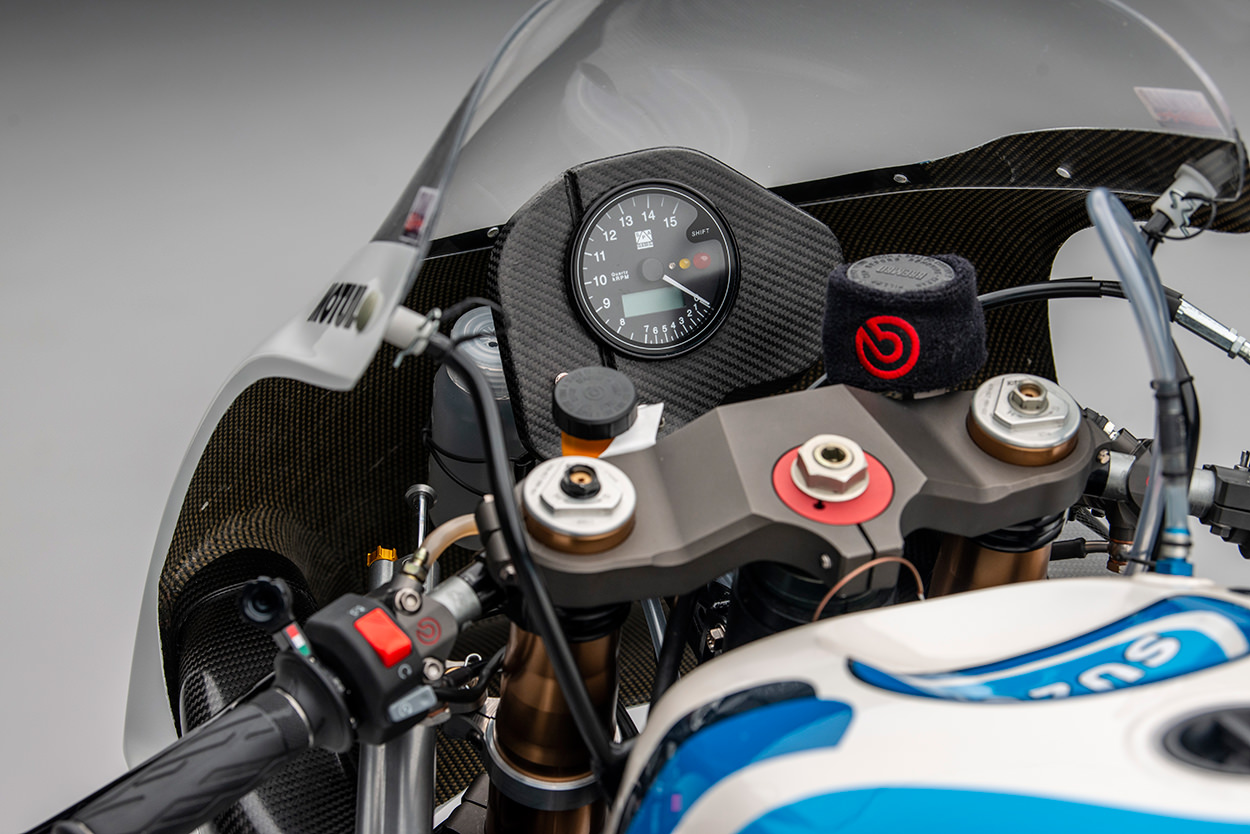 Multiple other parts have been created in-house, including the triple clamps, footrests, fork lowers, and new carbon-Kevlar bodywork—with a livery inspired by the original ‘Lucky Strike’ bikes and the famous RGV500 grand prix bikes.

The suspension is now K-Tech all round, and TCS have also installed a longer swingarm for more stability. Other modern upgrades include Brembo calipers, Earl’s brake lines, lightweight OZ rims and Dunlop slicks. 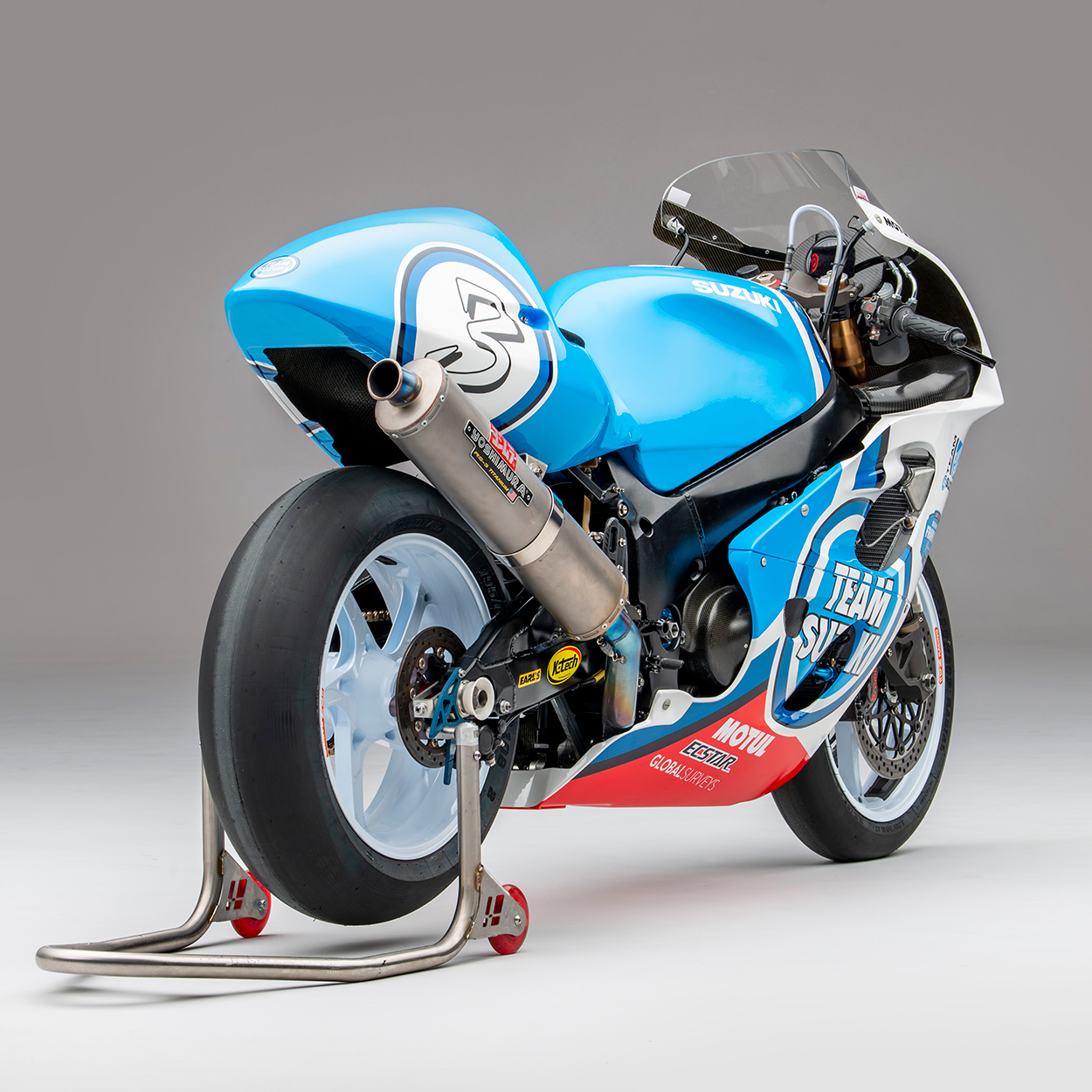 The new build means that the XR69 bikes can now be retired, and there’s a two-day shakedown test planned at Cartagena this week, with Michael Dunlop on board. If you go to classic race events in Europe, this is a bike to keep an eye on. [Team Classic Suzuki] 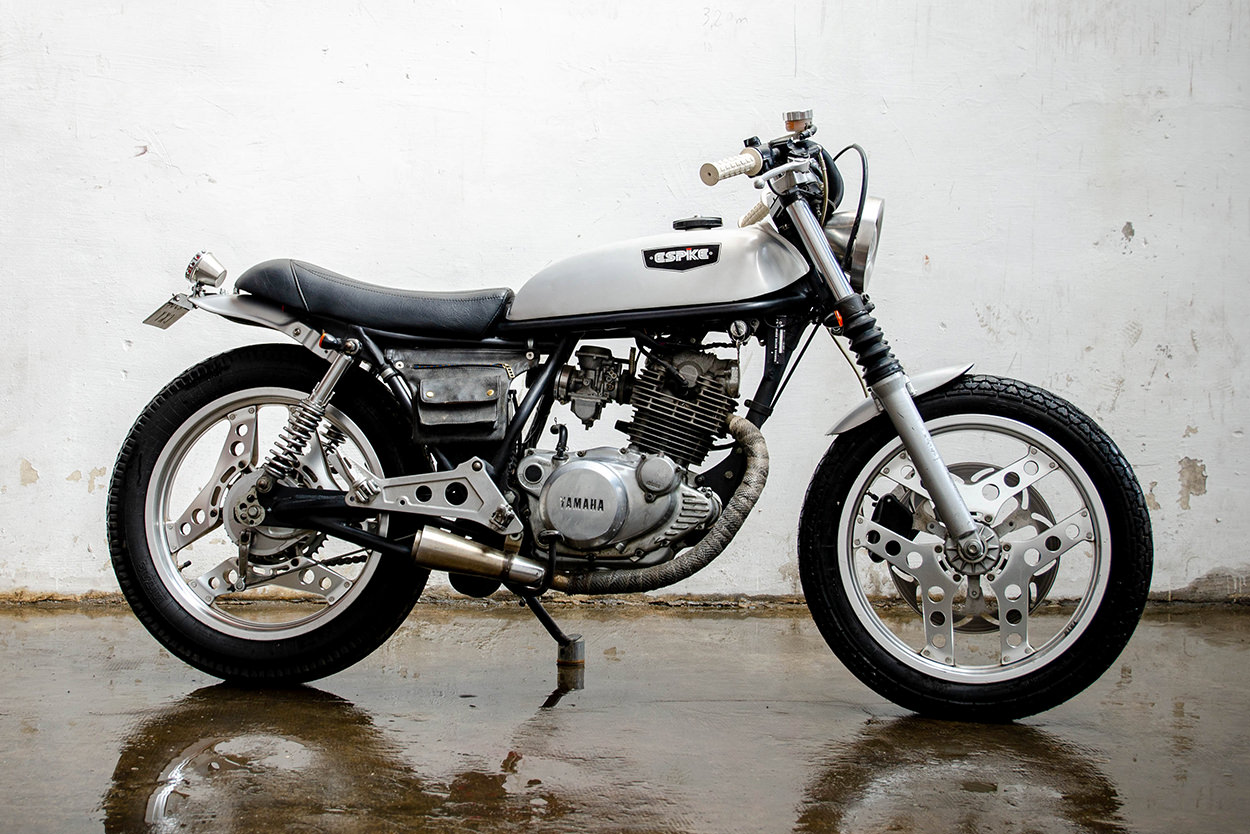 Yamaha SR250 by Jose Espike Sometimes the most humble of machines can be strangely appealing. This SR250 has little in common with the big budget builds we feature, but has oodles of grungy charm—and is perfectly practical too.

It belongs to moped fanatic Jose Espike of Barcelona, who uses the SR250 when he needs something bigger for getting around the city. He’s been modifying the BratStyle-inspired Yammie with the help of friends since 2012, making it one of the longest-term projects we’ve shown. 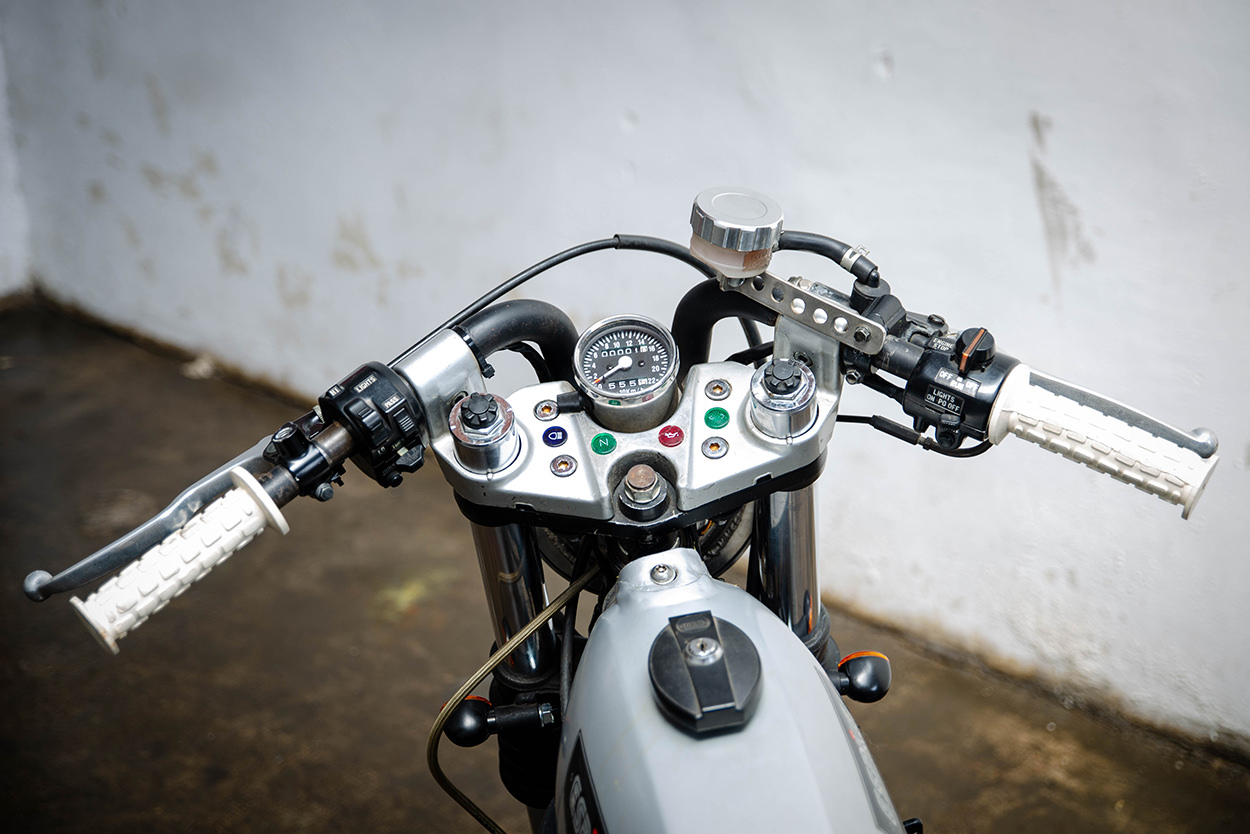 The big visual change is the tank, which is from a 1976 Derbi 50cc bike. Jose had to modify the frame to get it to fit, but it shows off the slim SR250 motor well. There’s a matching Derbi seat right behind, and lower down Jose has modified and strengthened the swingarm. 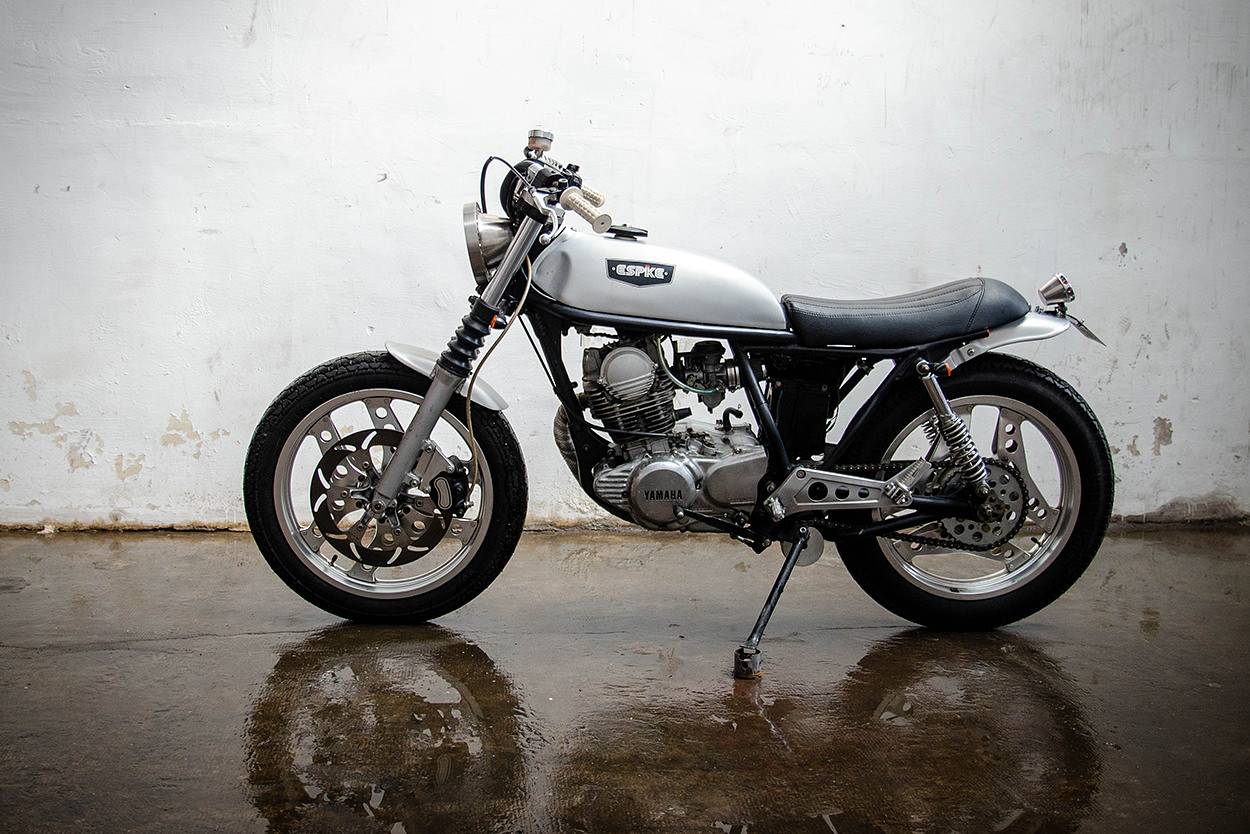 The wheels are from a 1980s Honda XBR500, and the suspension gets an even bigger upgrade with a set of 1990s Suzuki GSXF750 forks grafted on. The front caliper, weirdly enough, is from a Harley Softail, and there are small custom-machined parts scattered around—including the light housings.

For zooming around Spain’s most traffic jam-prone city, this grassroots SR250 should be perfecta. 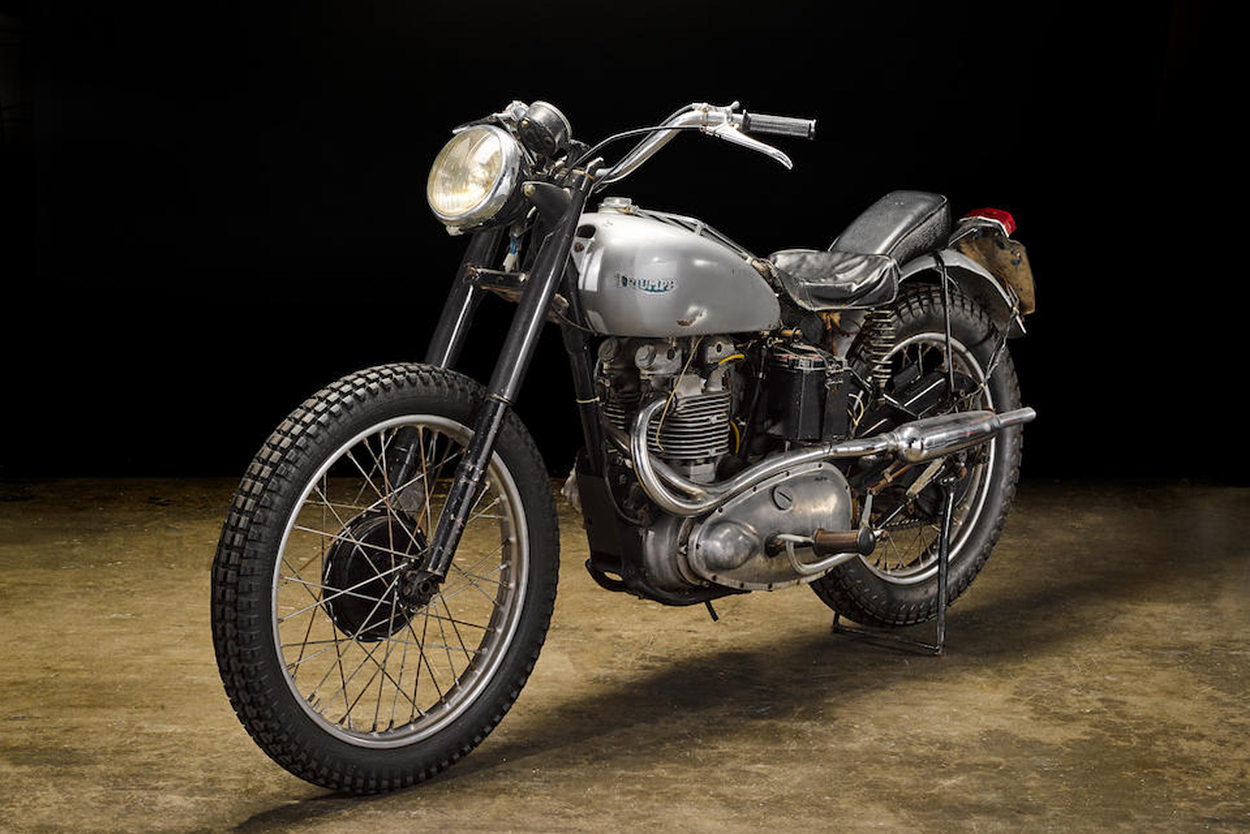 Fonzie’s 1949 Triumph Trophy 500 for sale Anyone who grew up in America in the 1970s probably has happy memories of Happy Days, the TV series starring Henry Winkler as Arthur ‘Fonzie’ Fonzarelli. In the motorcycling world, Fonzie is mostly associated with Triumphs, and this is one of three 500s that were used for filming. 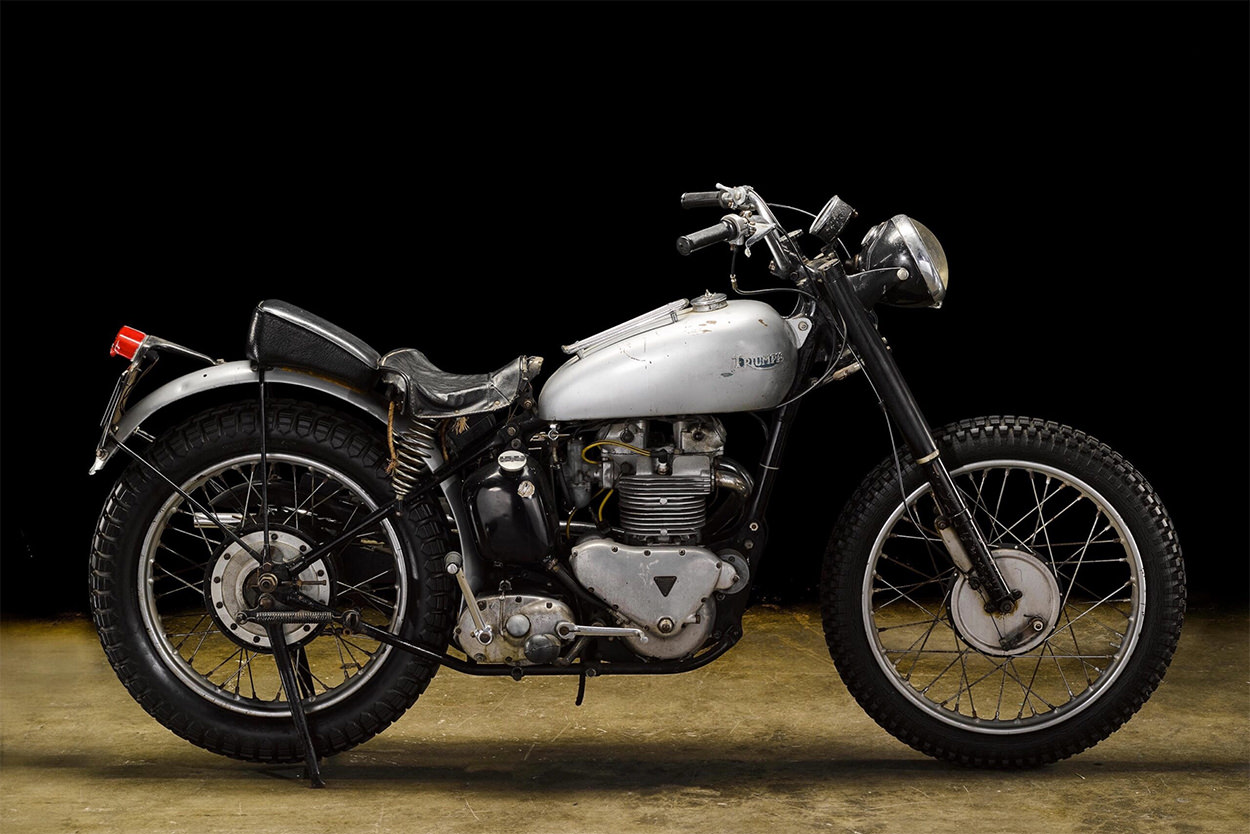 The other two have gone missing, which has ramped up the value of this otherwise unprepossessing machine. Normally, a late 40s TR5 in perfect nick would sell for between $10,000 and $15,000—but Bonhams reckons the Fonzie bike will go for between $80,000 and $120,000.

That’s the power of a TV connection, and also a Bud Ekins connection, since Ekins prepped the Triumphs for filming. This one, apparently, was built up from parts that Ekins had lying around, and the mods include different bars, removing the front fender, and painting the tank silver. 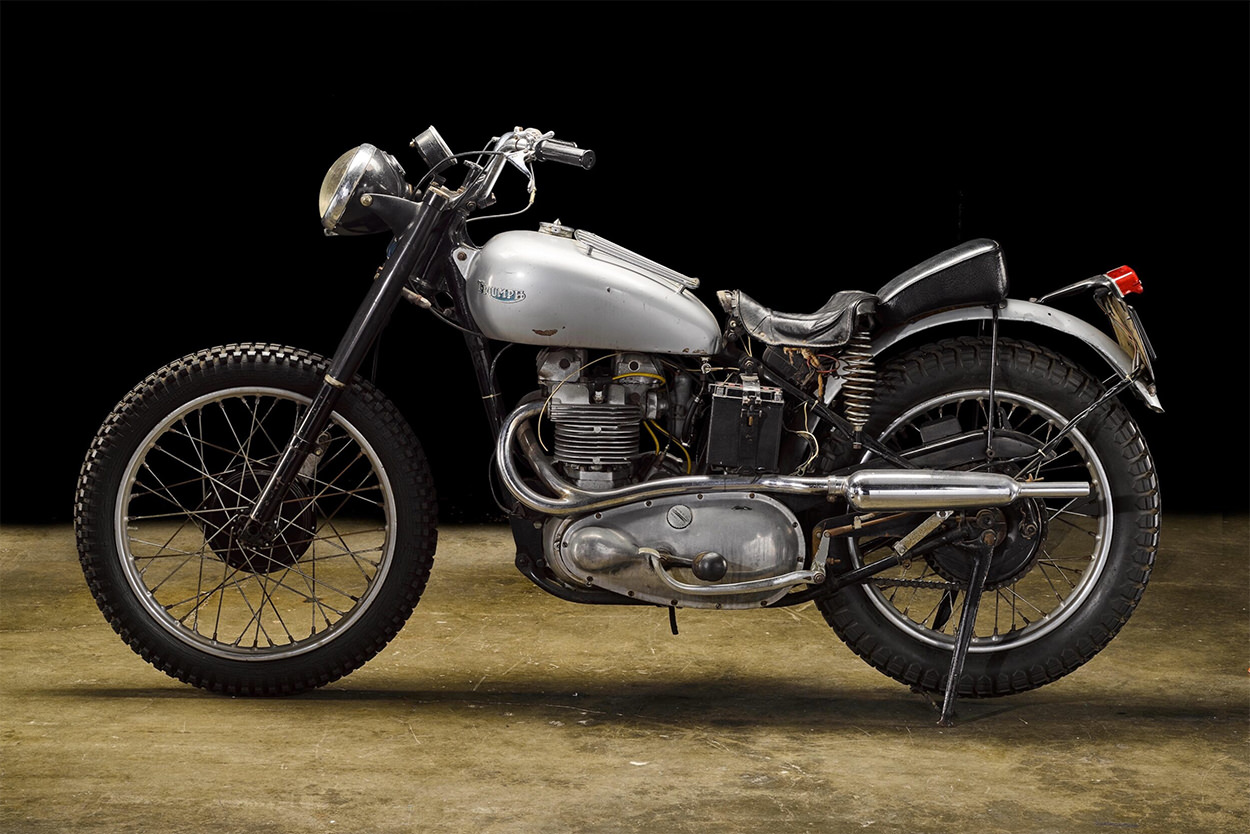 Still, in 2018 this slightly battered machine sold for $179,000 at Julien’s Auctions. So maybe Bonhams is being realistic in lowering its estimate. [Via] 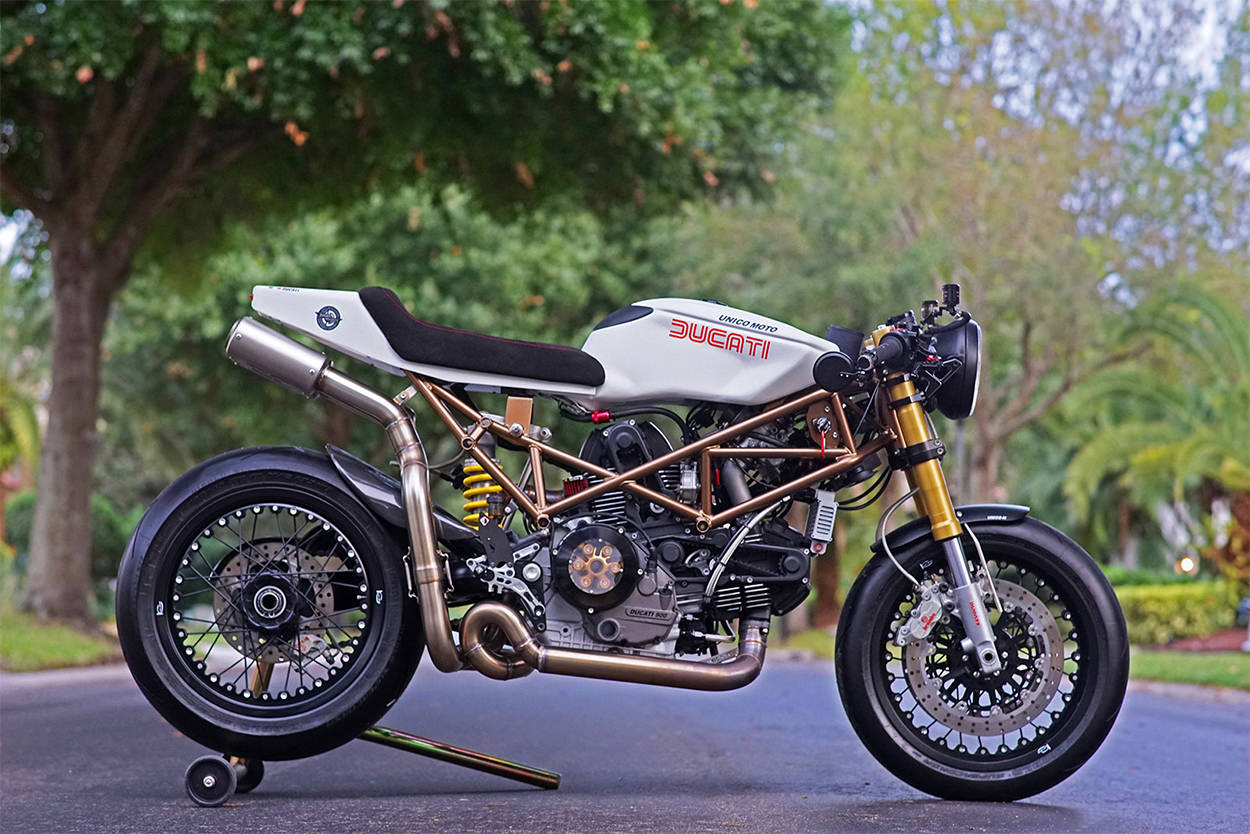 Ducati Monster café racer by Unico Moto If you want a performance-oriented custom, you can’t go wrong with the Ducati Monster. The earlier models are nimble and balanced; the later, bigger-engined machines have the power to pull your arms out of their sockets.

This striking 1997-based Monster comes from Unico Moto of Orlando in Florida. The company is run by Andre Frizzarini and Justin Andrew, and has built six customs since starting up in 2018—all Ducatis. 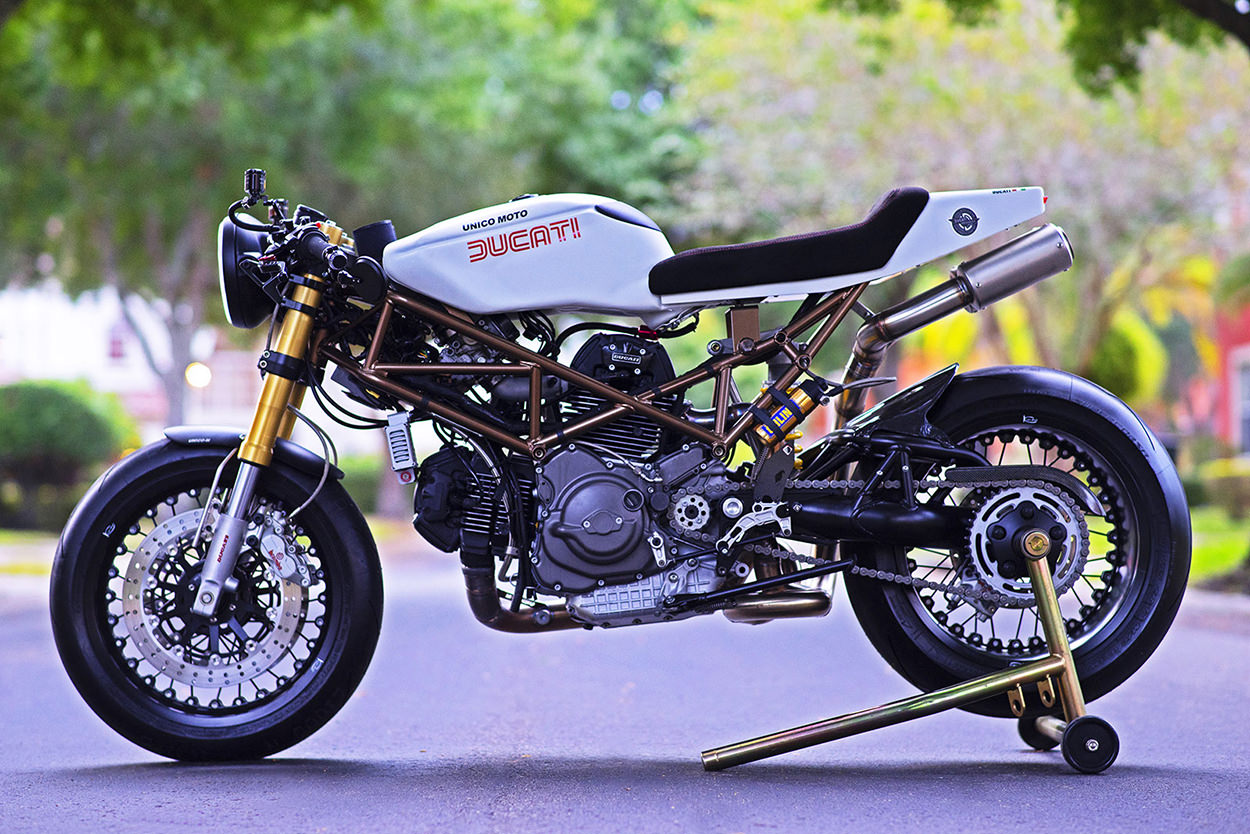 ‘GP1’ started life as a paper sketch that was digitized, tweaked, and then 3D modeled. “We wanted this bike to not only look amazing, but also perform like it,” says Andre, which explains the Ducati 900SS engine swap.

An uprated clutch peeks out behind a KBike glass cover, and there’s a unique custom air intake system with the filters right in front of the Ducati 999 fuel tank. At the exhaust end, Unico have fabricated a 2-1-2 set of custom stainless headers, terminated with a pair of GP style mufflers. 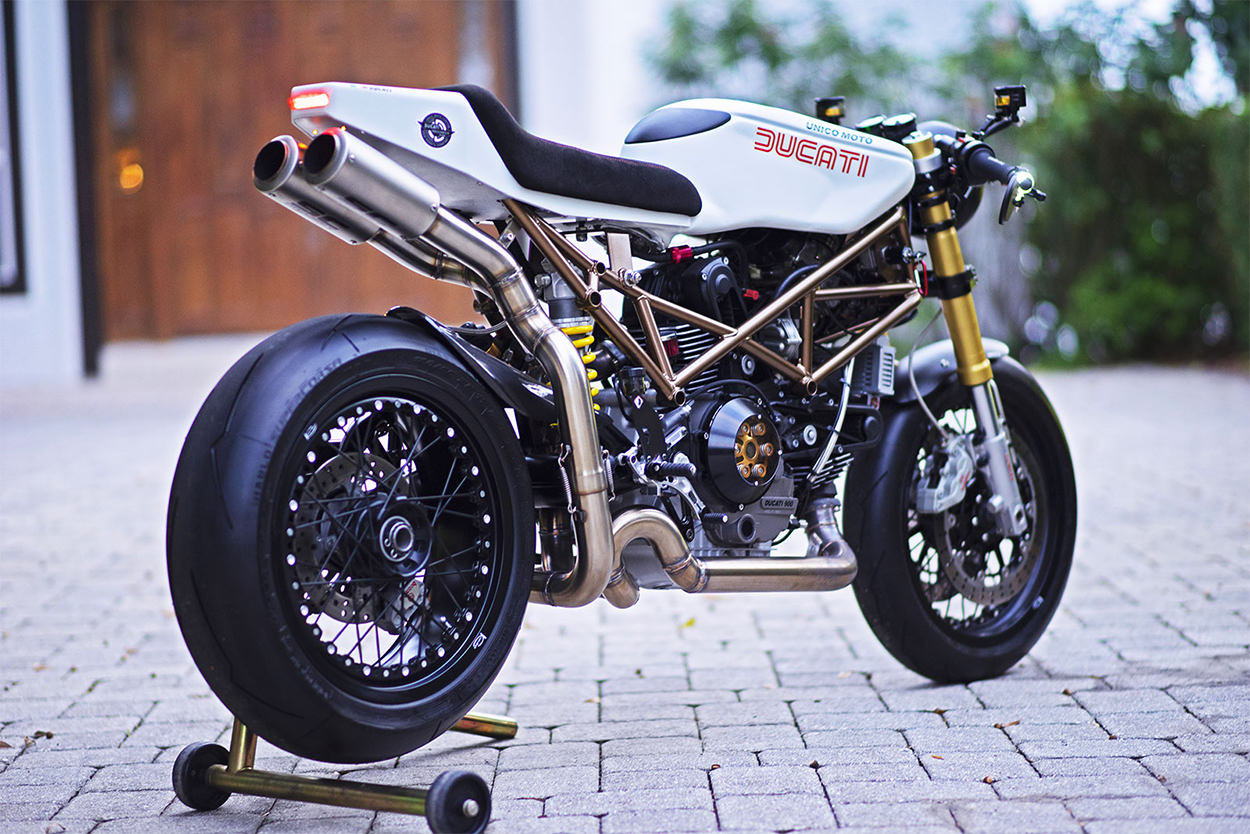 The rebuilt forks are hooked up via a SpeedyMoto top clamp, and at the back there’s a custom-built Öhlins shock and a single-sided swingarm. Kineo rims are wrapped in Pirelli Diablo Supercorsas to keep the show on the road.

It might look pretty, but this cafe racer means business. If your appetite is whetted, hit up Unico right now—the bike is for sale. [Via]