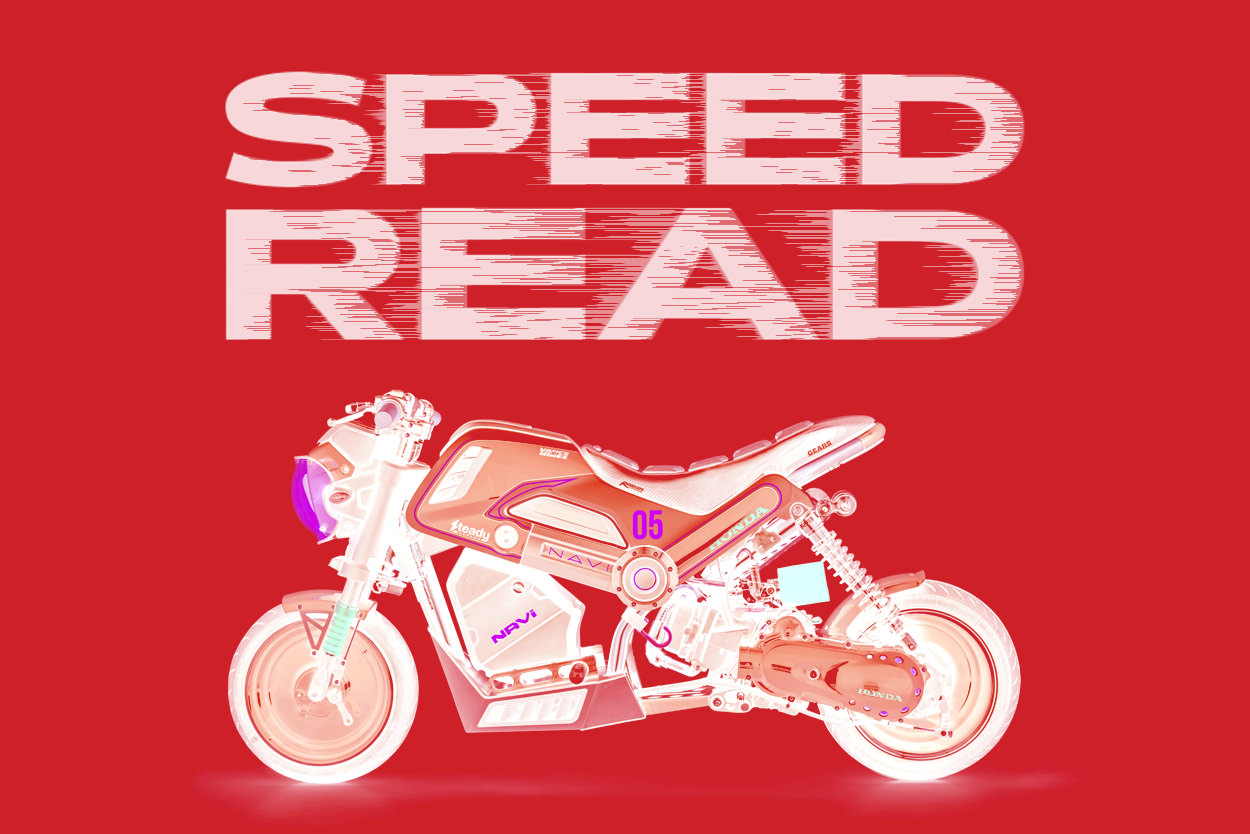 We’re going adventure riding this week, with a mini-review of the new Husqvarna Norden 901, and a look at MV Agusta’s upcoming Lucky Explorer Project. Also in the mix: a pair of Honda CT125s from K-Speed, and a pair of whacky customs based on Honda’s Navi mini bike. 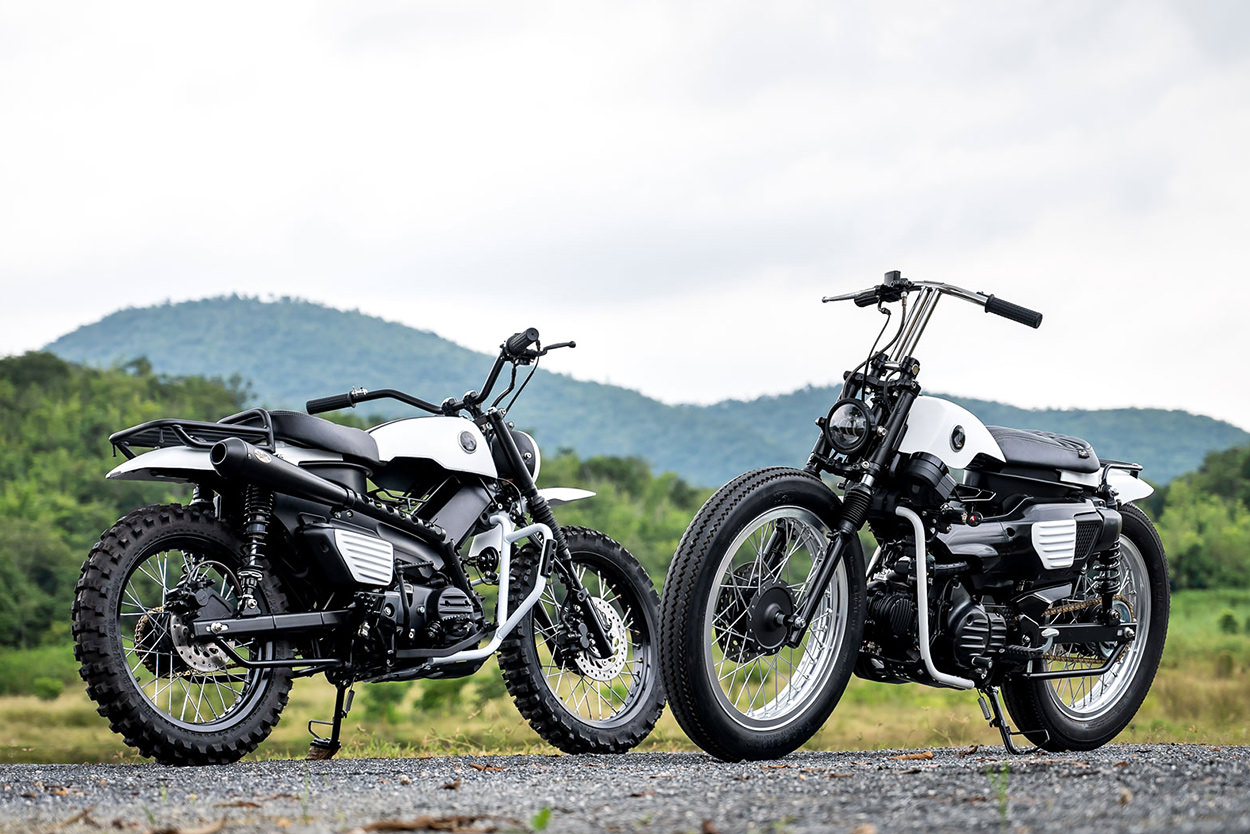 Honda CT125 customs by K-Speed This Thailand shop has built its fair share of jaw-dropping scooter-based customs, but this latest pair takes the genre to a new level. Dubbed ‘Road Runner’ and ‘Rough Runner,’ these two Honda CT125s don’t even look like scooters at a glance.

Known as the Trail125 in the US, and the ‘Hunter Cub’ in some markets, this Super Cub-derived scoot is a throwback to the classic Honda Postie. But K-Speed has gone in an entirely different direction here. 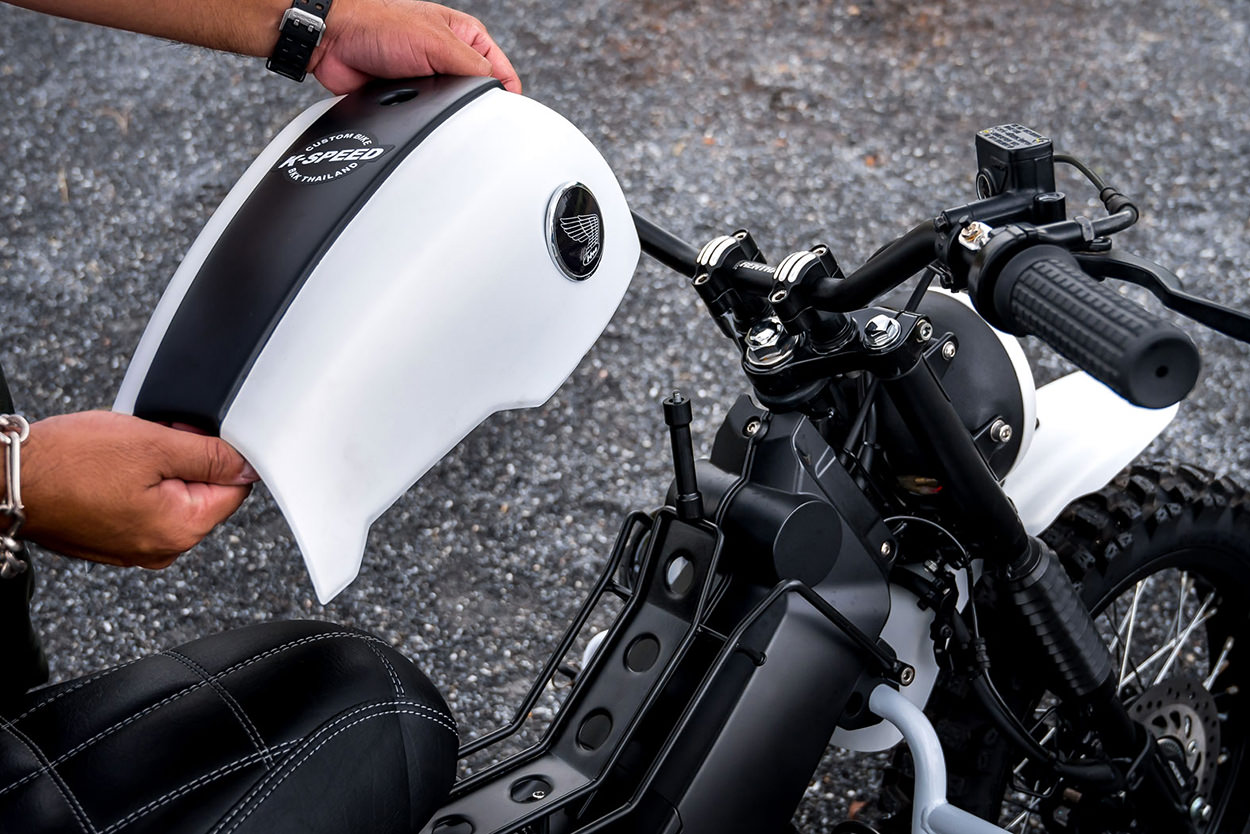 The biggest visual change is that each CT125 now wears its own unique ‘fuel tank.’ It’s really just a hollow cover that fits over the scooter’s step-through area and adds zero functionality—but we’re smitten with how it looks.

Both bikes feature handy utility racks under their tank covers too. 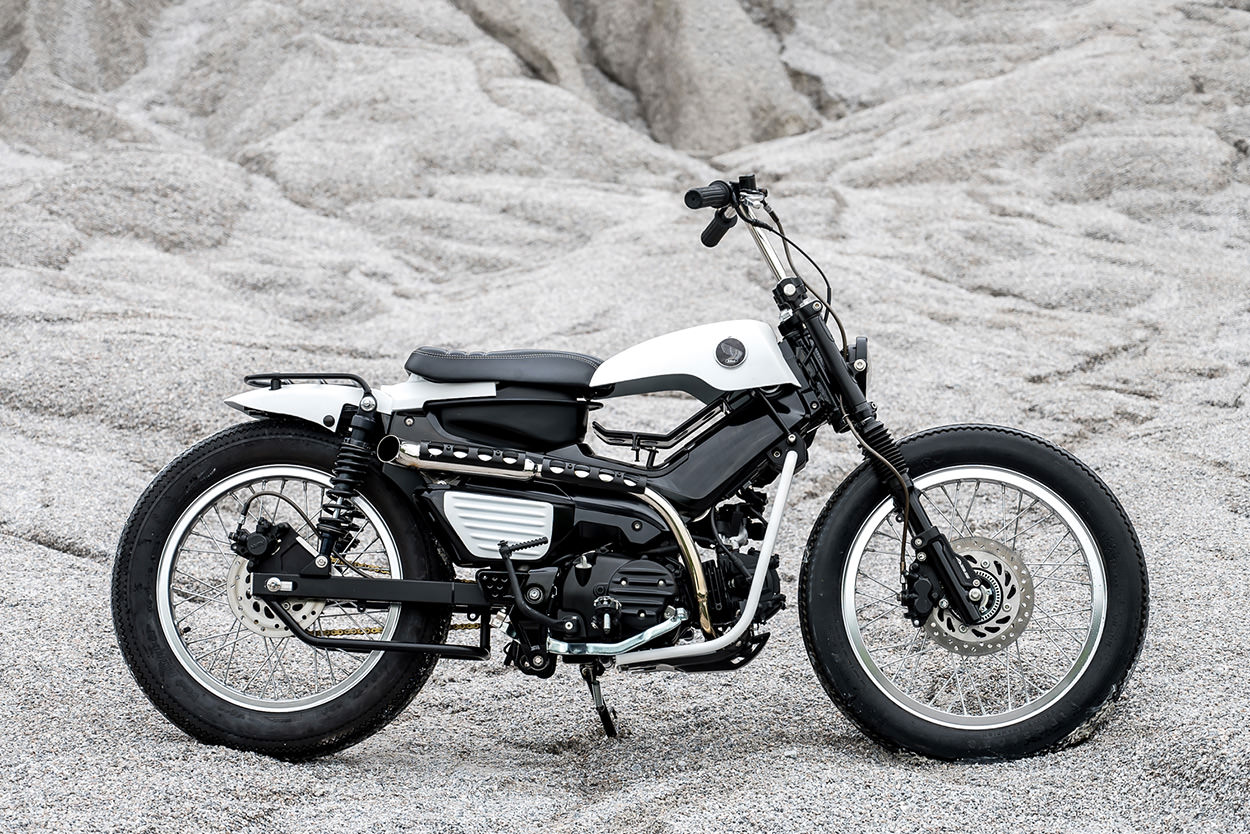 Road Runner [above] has been styled like a chopper, with custom T-bars that wear only a pair of grips, a single brake lever and micro switches. The speedo’s been relocated to the side of the bike, and the headlight’s been swapped for a smaller LED unit, with the old headlight ears trimmed off.

K-Speed also supersized the Honda’s wheels. And they installed a stretched swingarm, so that the rear wheel would fit, along with longer aftermarket shocks. Up top is a seat from the shop’s own Diablo range of parts, and a custom rear fender and luggage rack. 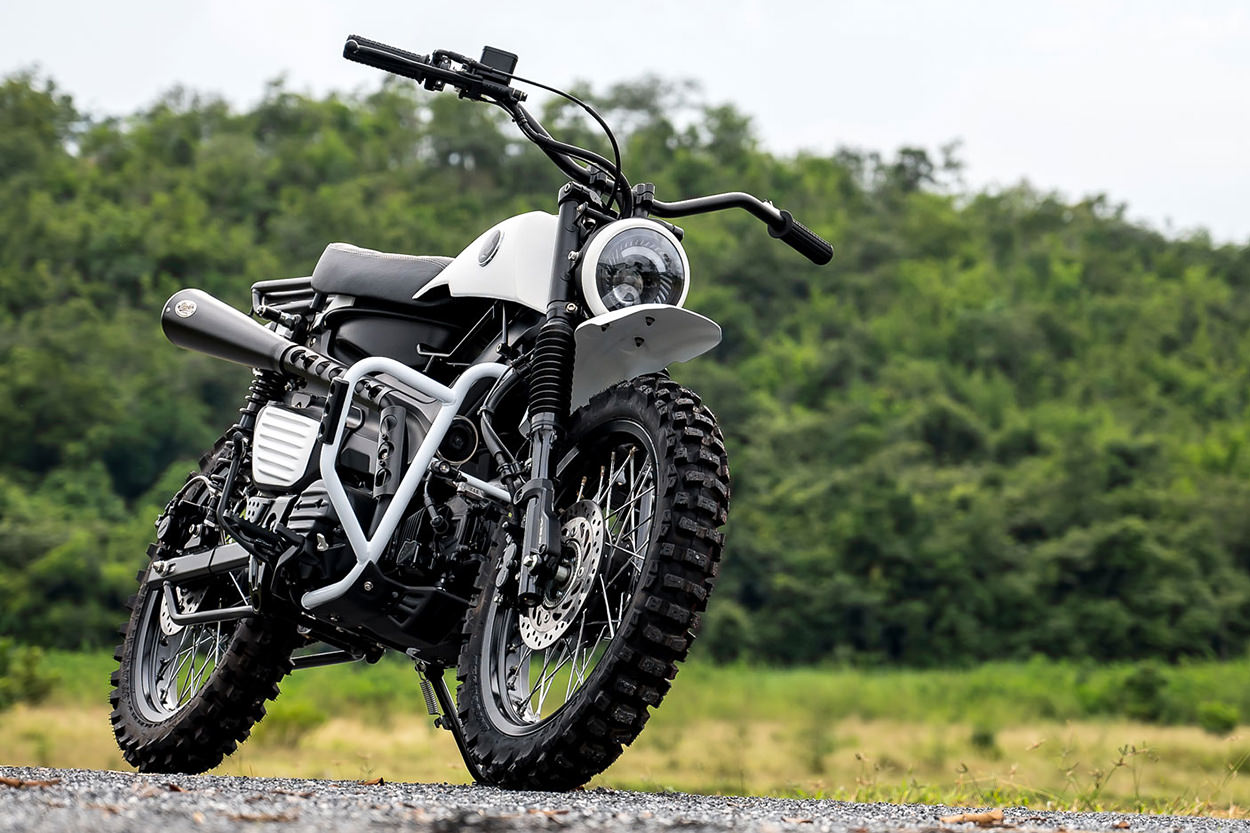 Rough Runner takes the form of a pint-sized scrambler, with a set of wide Renthal bars up front. K-Speed cleaned up the cockpit on this one too, and installed a bigger LED headlight. A custom-made high fender finishes off the front end.

The scrambler also has an extended swingarm and new rear shocks, but the wheels are stock, and wrapped in off-road rubber. And while it also has a Diablo seat and luggage rack, they’re styled differently here. 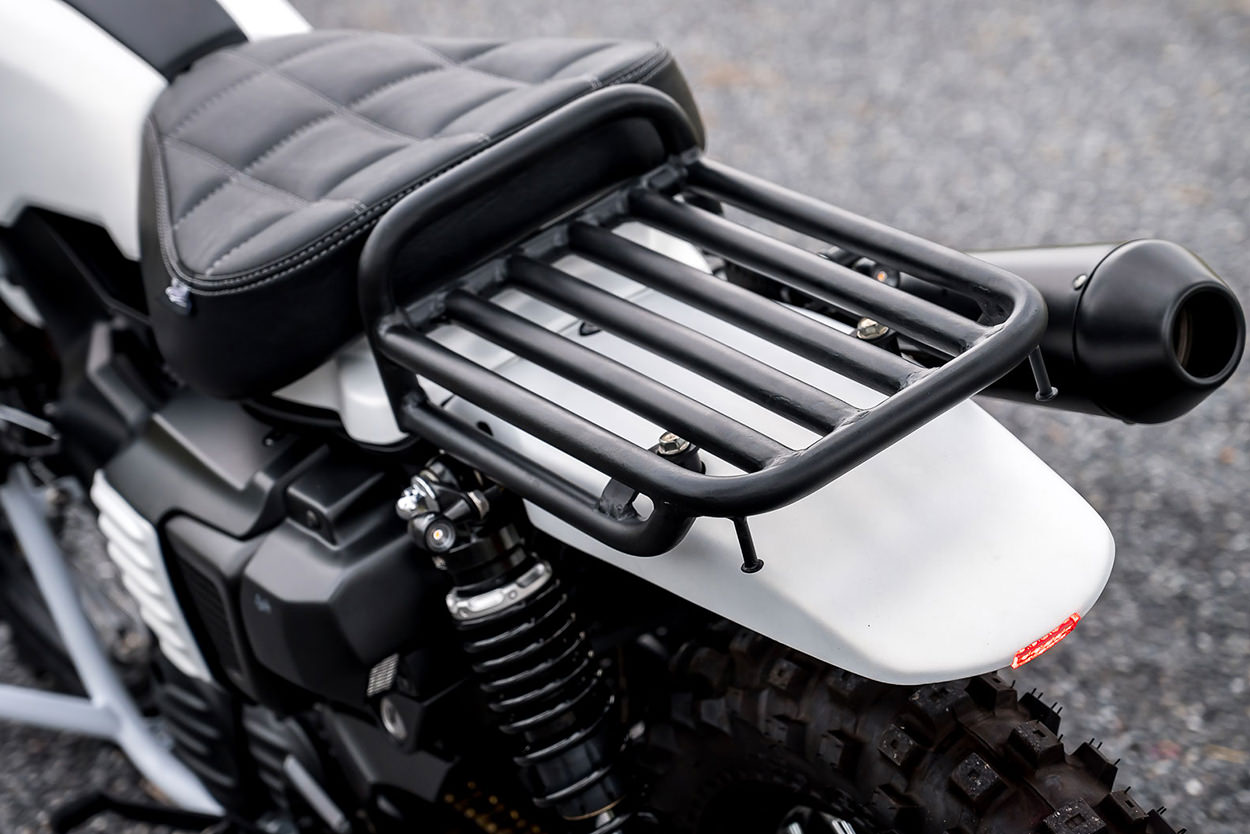 Both bikes also feature blacked-out motors, and a sprinkling of Diablo dress-up parts—like the ribbed engine covers. The exhaust systems are custom too, and the scrambler benefits from a pair of crash bars grafted onto its frame rails.

It’s a fresh and unique take on the humble Honda CT125, and we’re seeing potential for a whole host of variations on this theme. More, please. [Via] 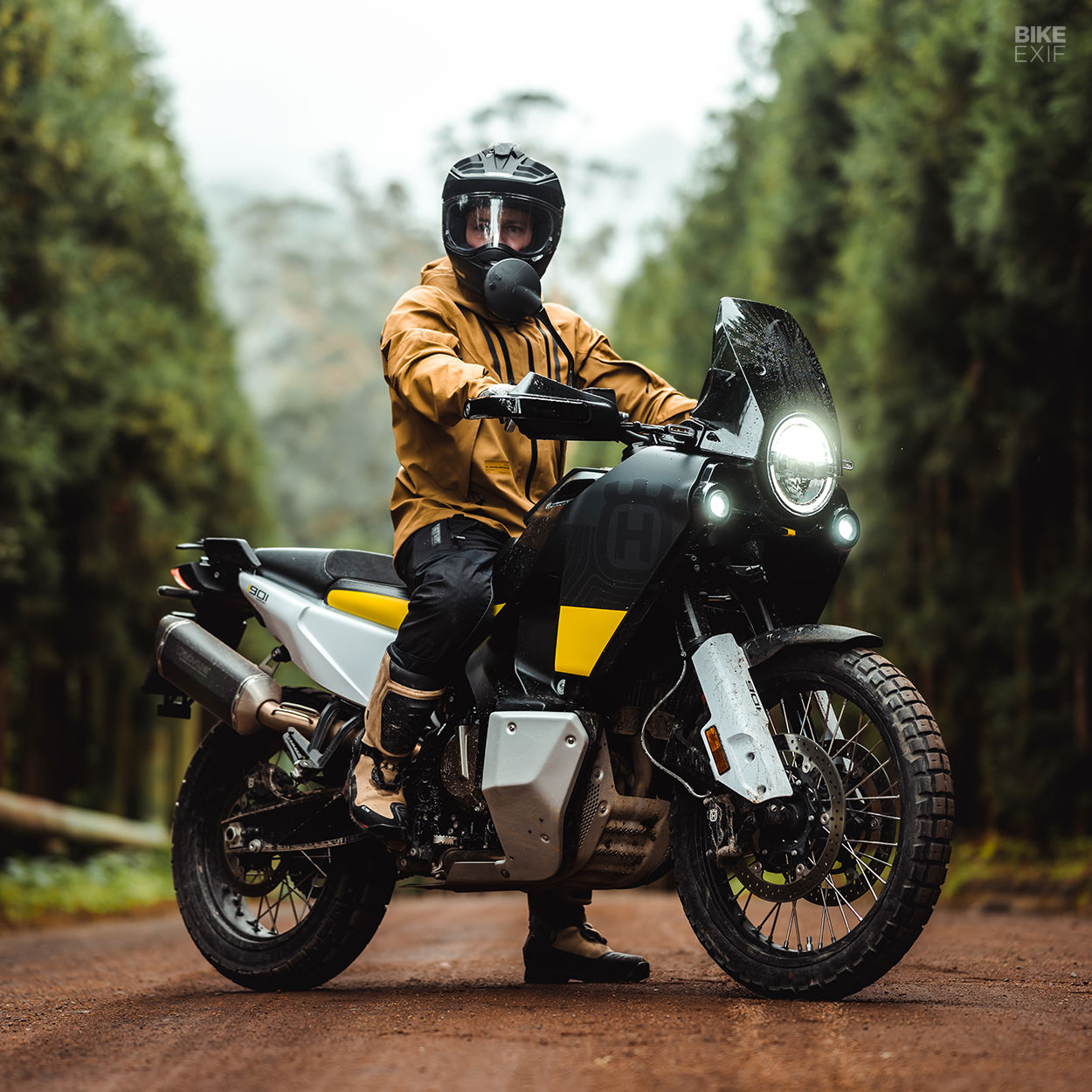 A designer’s impression of the 2022 Husqvarna Norden 901 Gorm Taube is not only a designer at Volvo, but also an all-round aesthete, a hella good photographer, a gear junkie and a keen adventure motorcyclist.

He’s also tight with Husqvarna in Sweden. So when Husky launched their brand new KTM 890-derived Norden 901 adventure bike to the press, on the stunning Portuguese island of São Miguel, Gorm was there. We couldn’t help but pick his brain, for a few quick impressions of a bike that we’ve been very curious about. 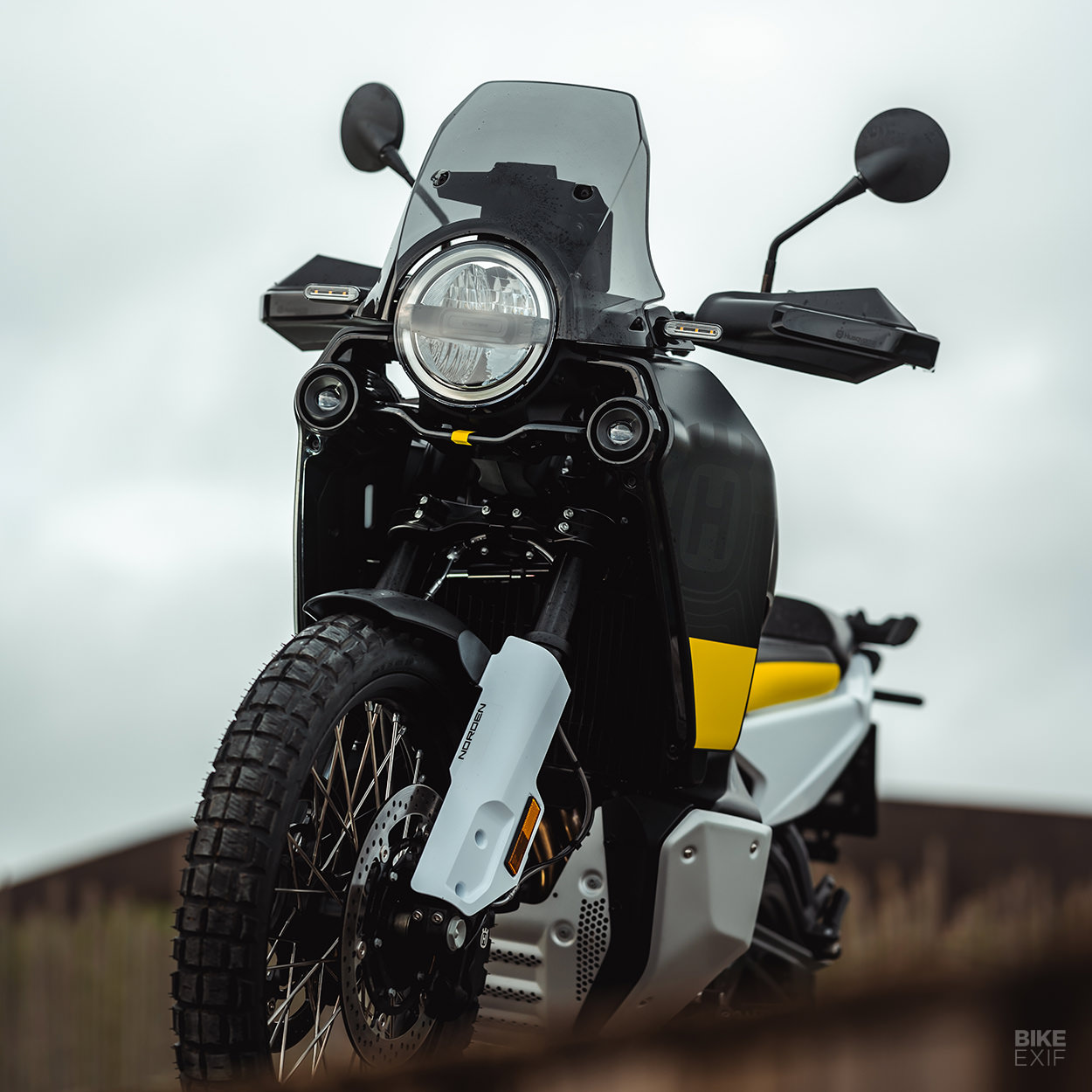 Hey Gorm, as a designer, what’s your impression of the Norden 901? The Norden 901 is one of those rare bikes that lives up to the hype for me, from concept to production model. I had my reservations when I saw the first official images being released, as it looked heavier and boxier than I remembered it. But once I was standing in front of it those thoughts were gone; it looks damn impressive.

It has the same design cues as the Svart- and Vitpilen, and plays in that retro world with its big round headlight and tapered tail section. 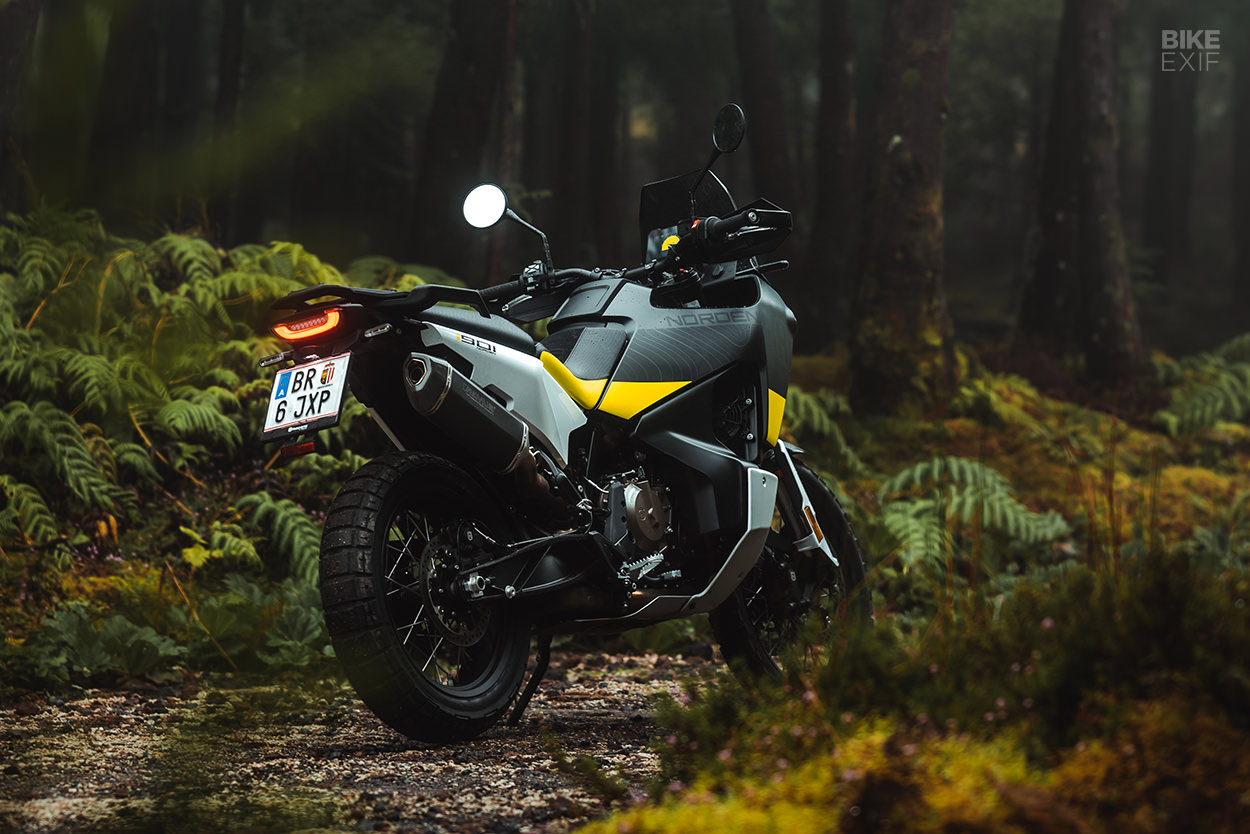 I feel the same about this bike that I do about the Svartpilen: it’s really well designed, and not a bike that needs a lot of changes to shine. The few things I would change right away are a high front fender, a different set of mirrors, and a cleaned-up plate holder area. But that’s more or less it, and I think that says a lot.

How does it feel, ergonomically? The seat might be the comfiest seat I’ve ever tried! The height options of the seat also really made it easy to find a comfortable position—and for me, with short legs, I felt right at home in the lower position. 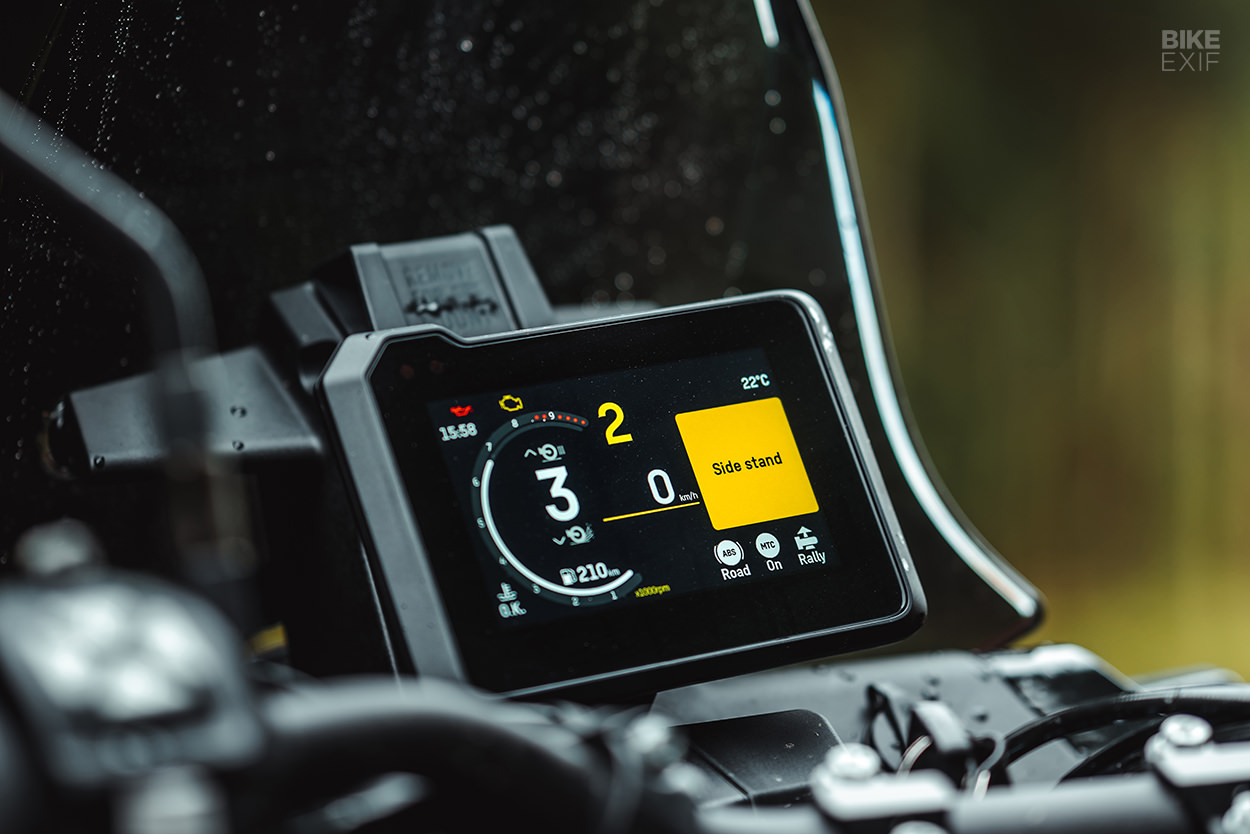 The controls are pretty straightforward, and my only remarks would be around the screen interaction and layout. I might be a bit more nerdy about these things as it’s what I do for a living. I’m still on the fence about these larger and larger screens that are coming into the bike world.

The windscreen is not adjustable, which is a little bit of a let down, as the wind on the highway hits me straight in the face. Husky’s solutions are either to add a little screen deflector, or a much larger screen. Not the most aesthetically pleasing solutions. 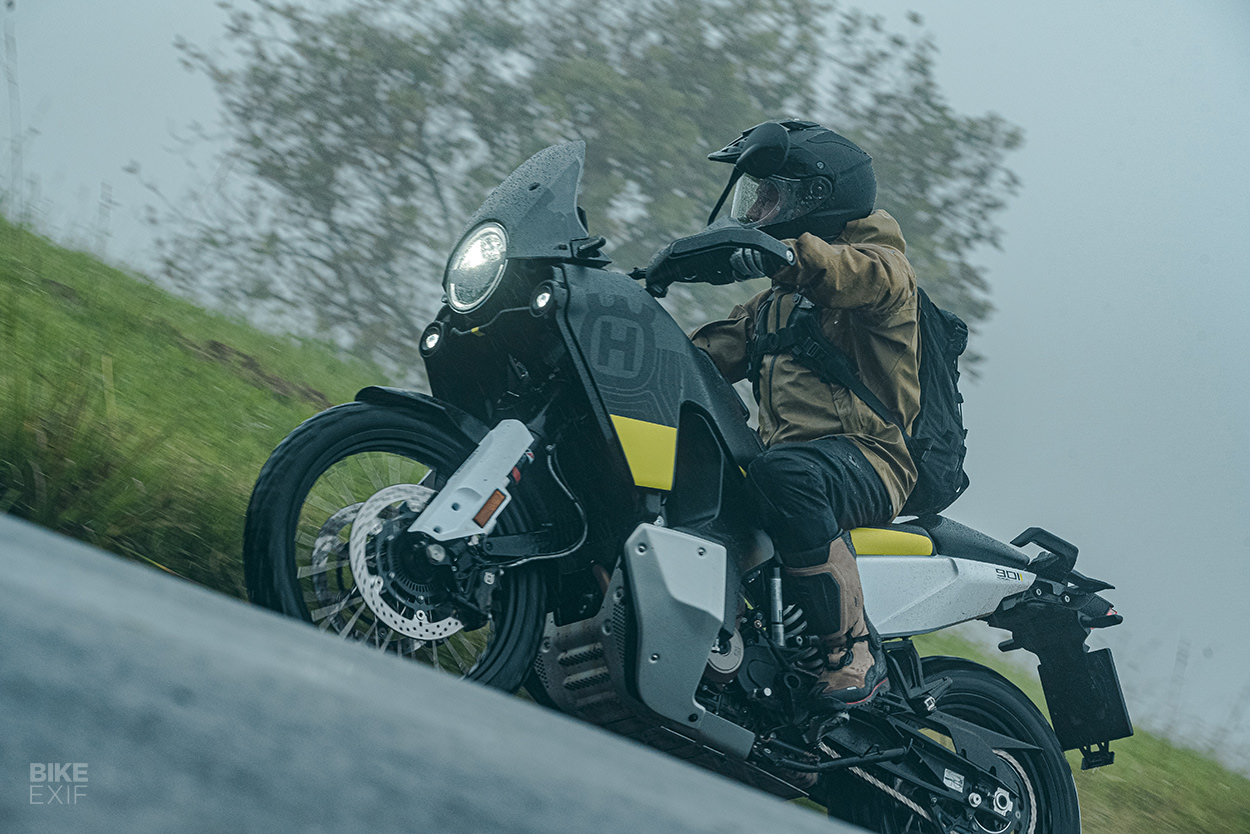 What’s it like to ride, on the road? The engine is very smooth and pulls through the revs without delay. I get the feeling that all new bikes are more or less easy to ride, and this one is no exception. It feels planted, and with all the electronics that comes with it, even on wet, moss-covered roads it felt really stable and calm.

The mechanical grip on it is crazy good. 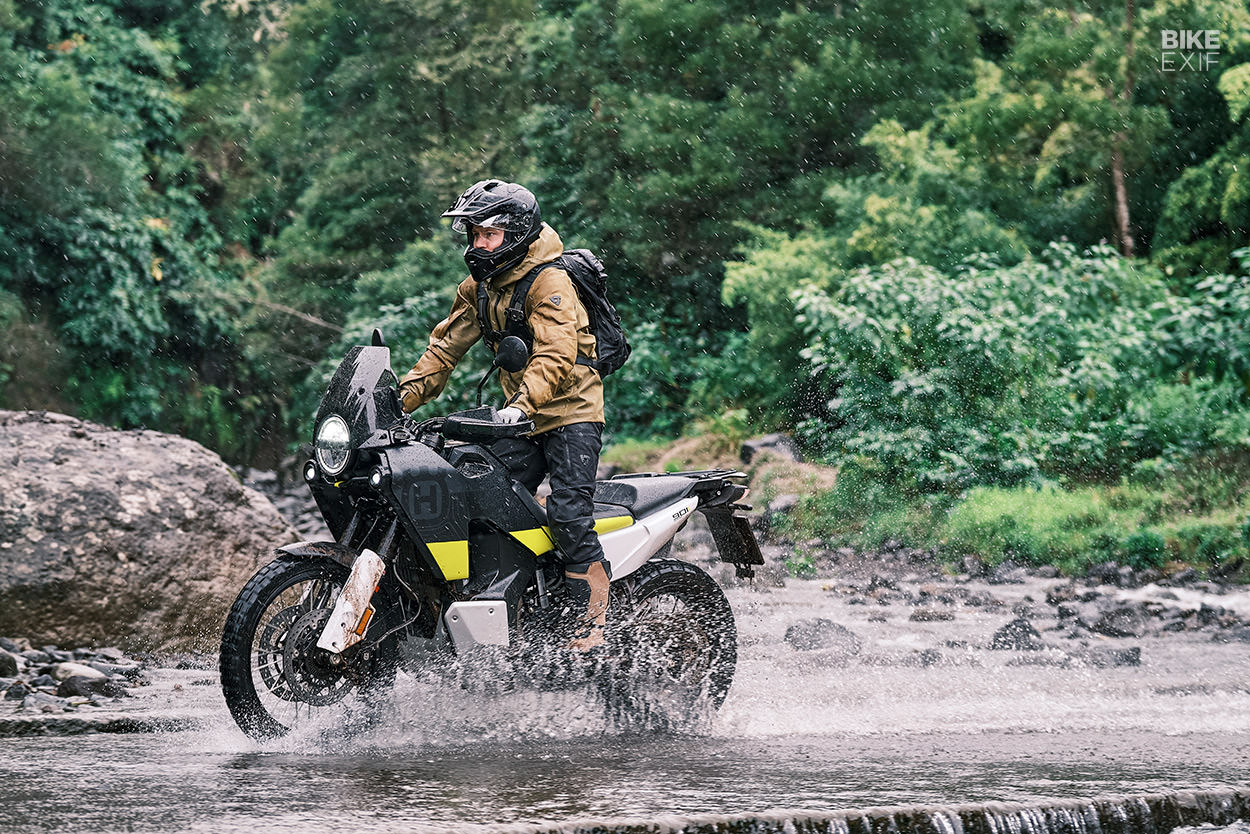 What’s it like to ride, off-road? I’m no Lyndon Poskitt, nor do I possess the off-road ability that his pinkie probably does. But the Norden inspires confidence, and the suspension is soft and plush. Even the rougher stuff feels smooth, and the power of the engine really makes it a fun machine.

The ‘Explorer’ riding mode and the quick adjustment of rear wheel slip really worked well, and made it simple to dial in my preferred feel. But it’s for sure more of a travel or adventure bike than a rally bike. [Images by Gorm Taube and Husqvarna | Husqvarna Norden 901] 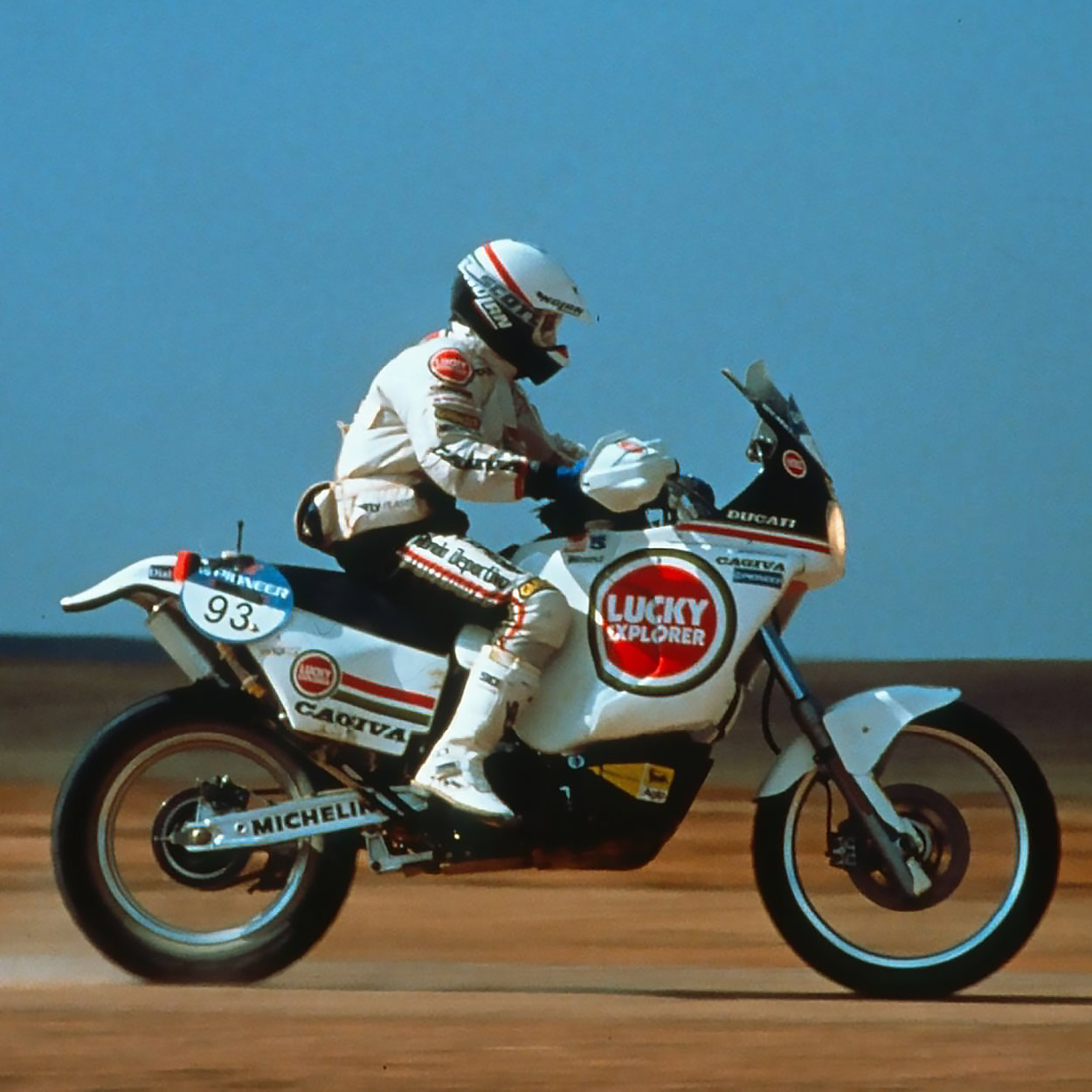 MV Agusta Lucky Explorer Project Husqvarna aren’t the only ones playing in the retro adventure bike space—MV Agusta have just started teasing their ‘Lucky Explorer Project.’ Leaning on the legacy of the Lucky Strike-sponsored Cagiva Elefant Dakar rally bike (Cagiva used to own MV Agusta), the brand has said it will reveal two new adventure motorcycles at EICMA this week.

Details are thin, but Moto.it has some spy shots that offer a few clues—like a 21” front wheel that should please the off-road elite. Several outlets have also reported that MV Agusta CEO, Timur Sardarov, has teased a new 950 cc triple-cylinder motor… so we’re assuming that that’s what will power it.

The Dakar imagery that the Italian marque is pushing hard in their teaser campaign also suggests at least some off-road capability, and, hopefully, throwback styling. As long as MV Agusta call it the ‘Elefant’ and throw a massive ‘Lucky Explorer’ logo on the side, we’re happy… even if it isn’t technically a Cagiva. [Lucky Explorer Project] 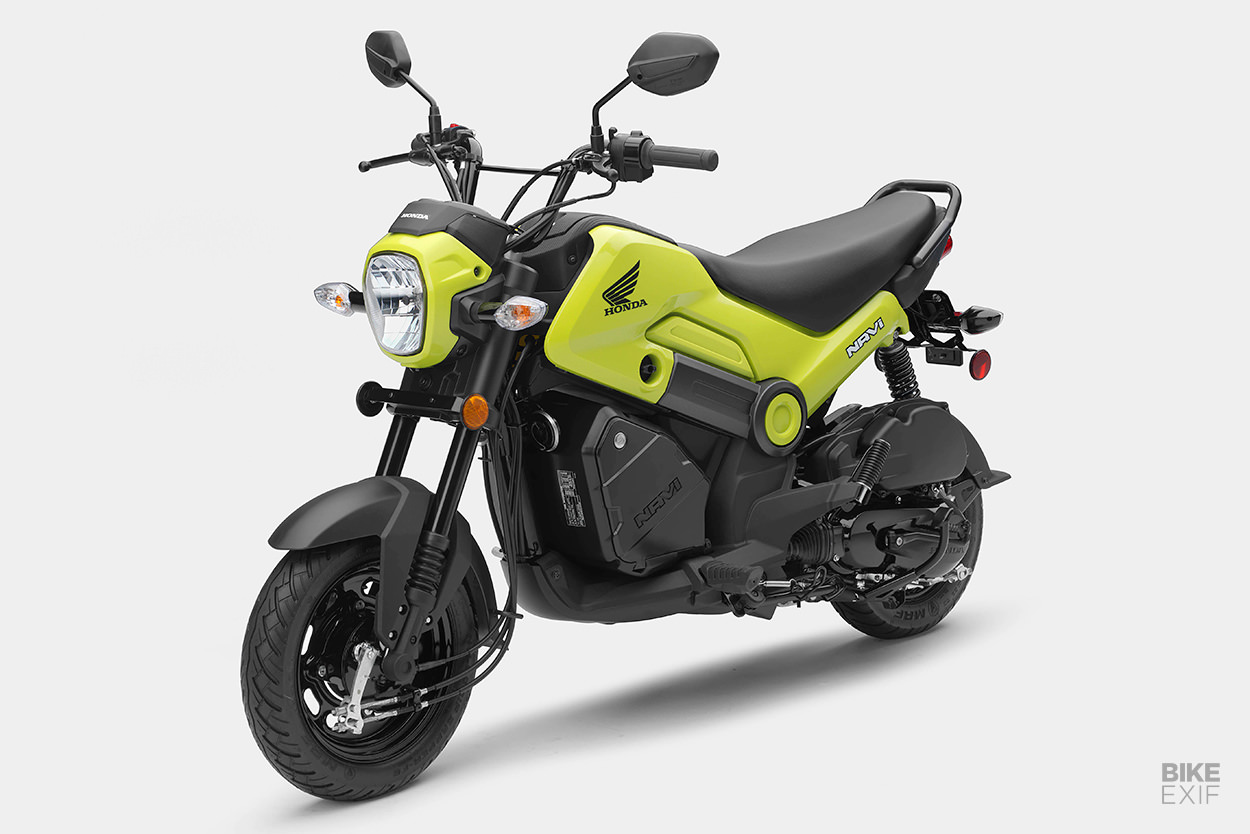 Honda Navi customs by MNNTHBX and Steady Garage Honda USA has just confirmed that the Navi will be sold in the US. The 109 cc mini-moto sits somewhere between the Ruckus and the Grom, is priced from a mere $1,807, and is downright adorable.

It’s also fun to customize, as is evident by a pair of Navis that Honda USA had modified for their launch event by two small-bike specialists. 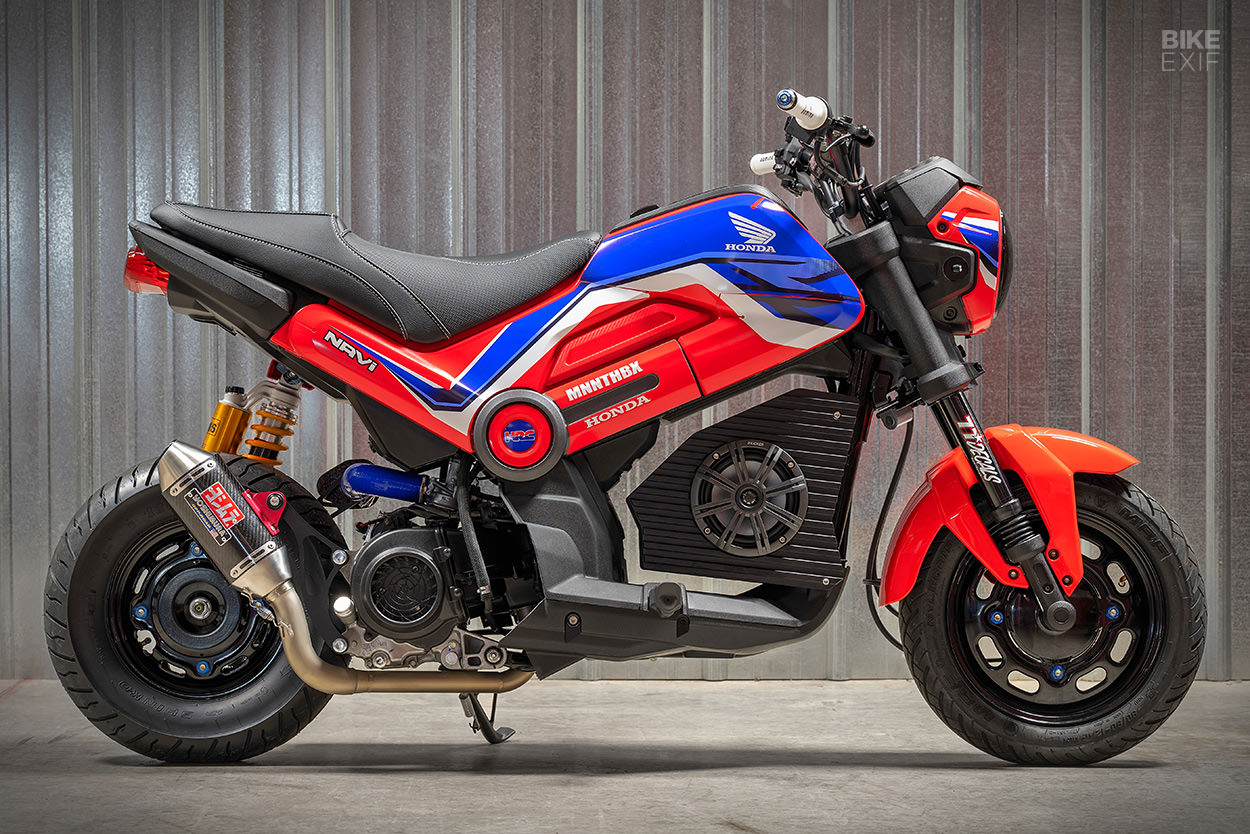 The first bike comes from Kevin Estep and Greg Hatcher at MNNTHBX in Tennessee. The guys immediately saw the Navi as the perfect trackside pit bike, and opted for a sporty look. “We were really inspired by the bike’s utility, and how we could take that and make it cool,” says Kevin.

MNNTHBX wrapped the bodywork in HRC-esque red, white and blue graphics, and treated it to a new seat. Up front are a set of Renthal motocross handlebars with Domino grips, with tiny LED turn signals all round, and a ‘tail tidy’ at the back. 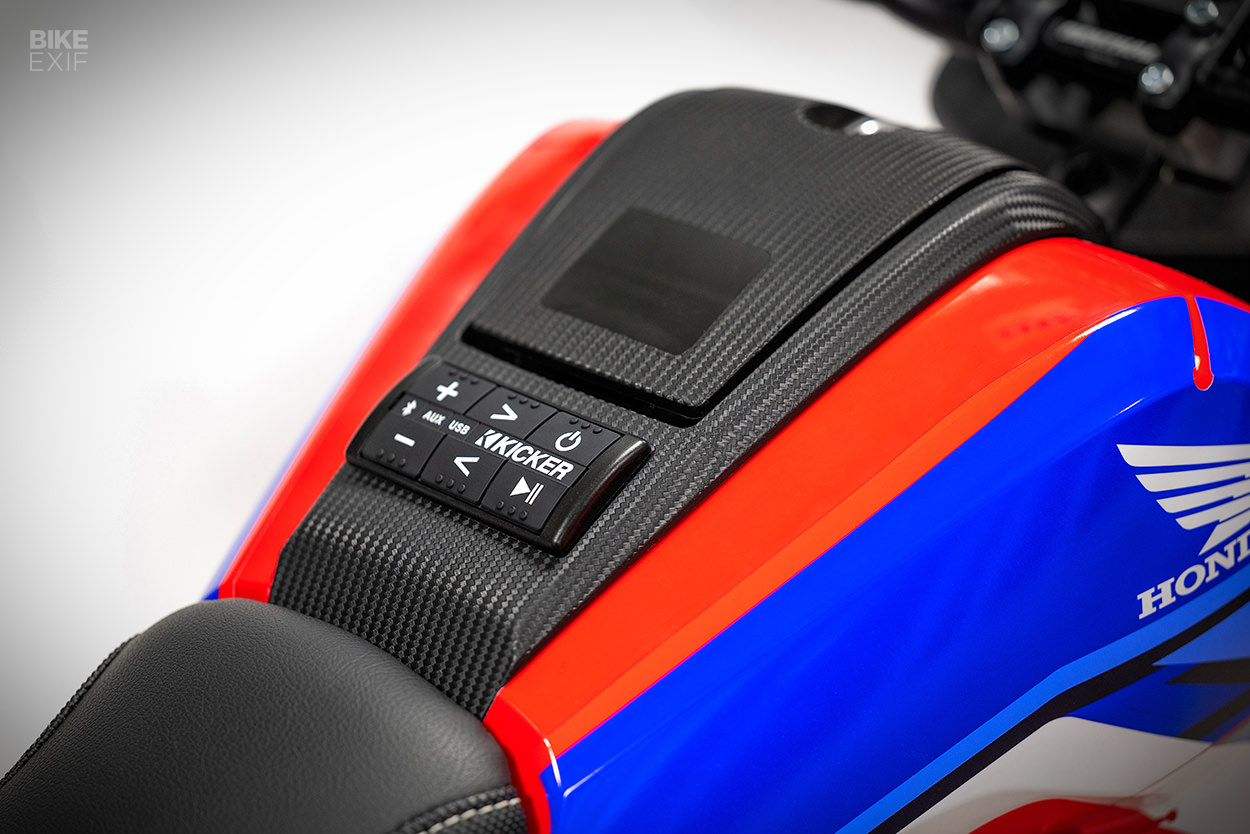 Lower down is a redesigned intake with a pod filter, and a carbon Yoshimura slip-on. The crew also fitted the biggest 10” tire they could to the rear wheel, to balance it out with the 12” front hoop. But the best upgrade on this Navi, hands down, is its sound system—complete with a control panel on top of the bike.

“The Navi already comes with a storage compartment, so we thought about how we could repurpose that,” says Kevin. “We figured if you’re in the paddock, you always want some tunes, so we built a billet enclosure to go in that same space and integrated a Kicker sound system. It sounds really good!” 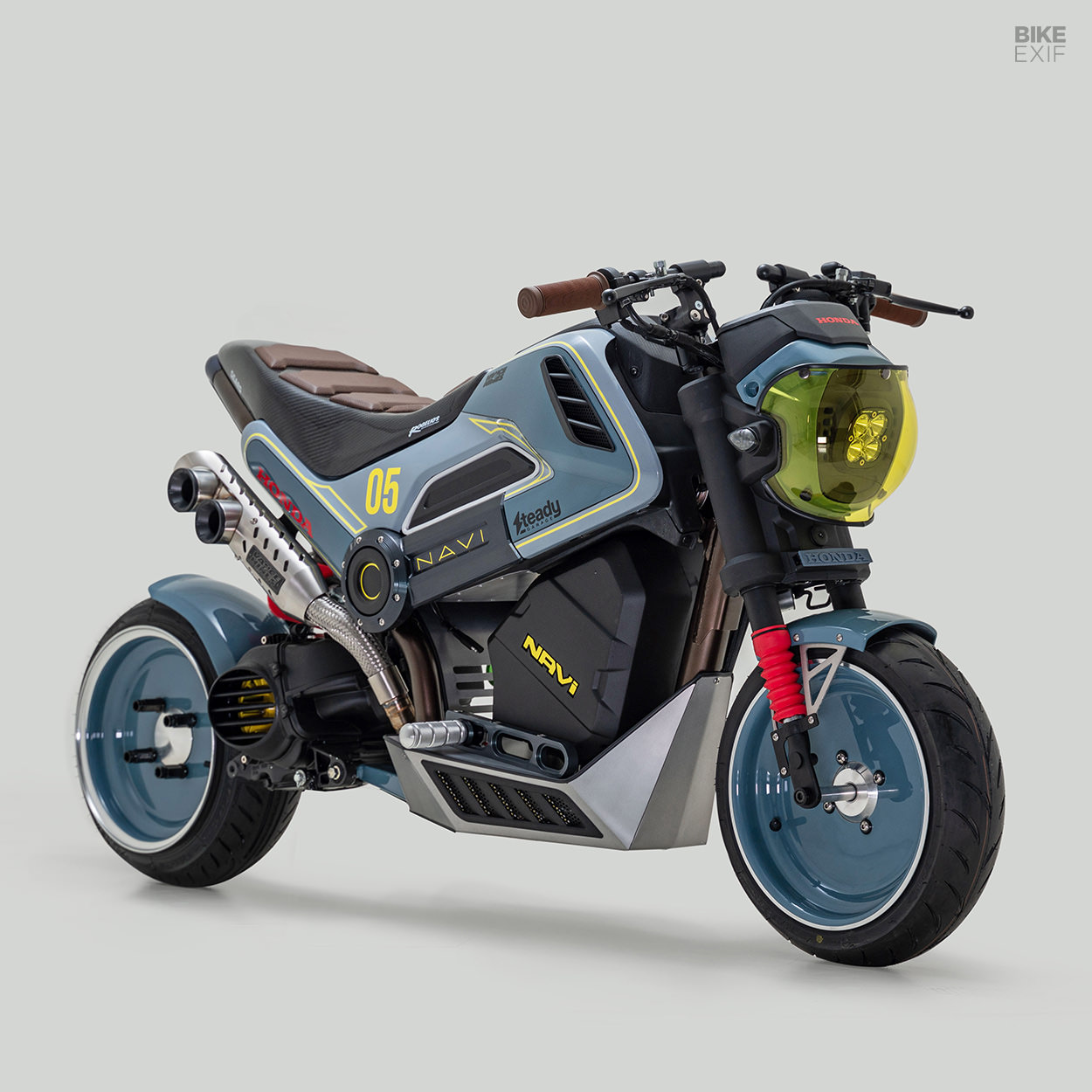 The other custom Navi comes from California’s Steady Garage, run by Kevin Dunn, Jimmy Chen, Bahwee Suh and Duy Nguyen. “The style we went with is similar to what we call ‘street Grom’—low stance and a wide front wheel,” says Mr Dunn.

Steady’s take on the Navi is as outrageous as we’ve come to expect from them. Wrapped in a manga-like livery, it’s also sporting a custom rear shock from Gears Racing, and a smaller and wider rear wheel. The custom exhaust comes from Vance & Hines, and has twin outlets poking out the side. 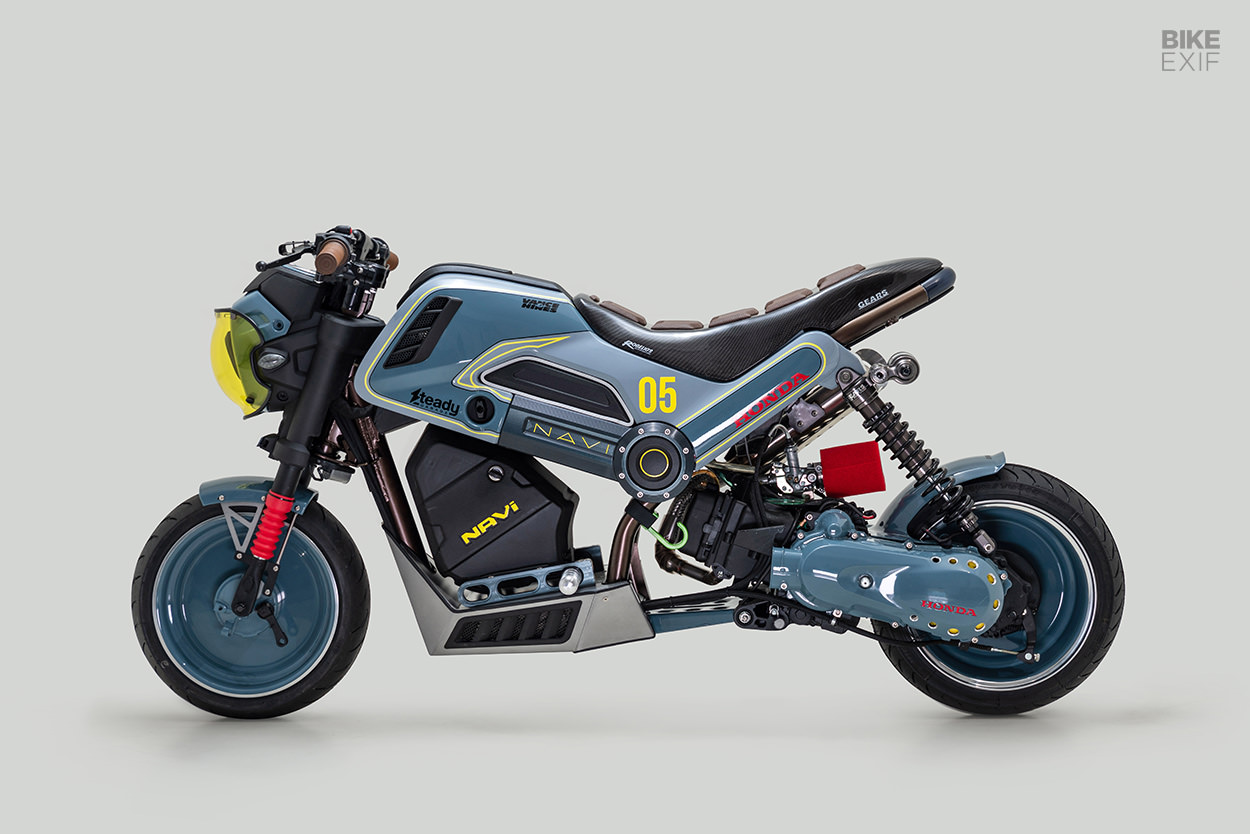 Steady installed a helmet bubble visor over the headlight, then added raised clip-ons with Biltwell Inc. grips. They also reworked the rear end with a sharp tapered effect. The seat consists of a carbon fiber shell based on the OEM shape, with individual pads up top.

The crew kept the Navi’s storage box, but trimmed it down, and made a molle panel that can replace it in a jiffy. Zany touches are everywhere—from the solid wheels and custom belly pan, to the LED strips that light up the pin striping. 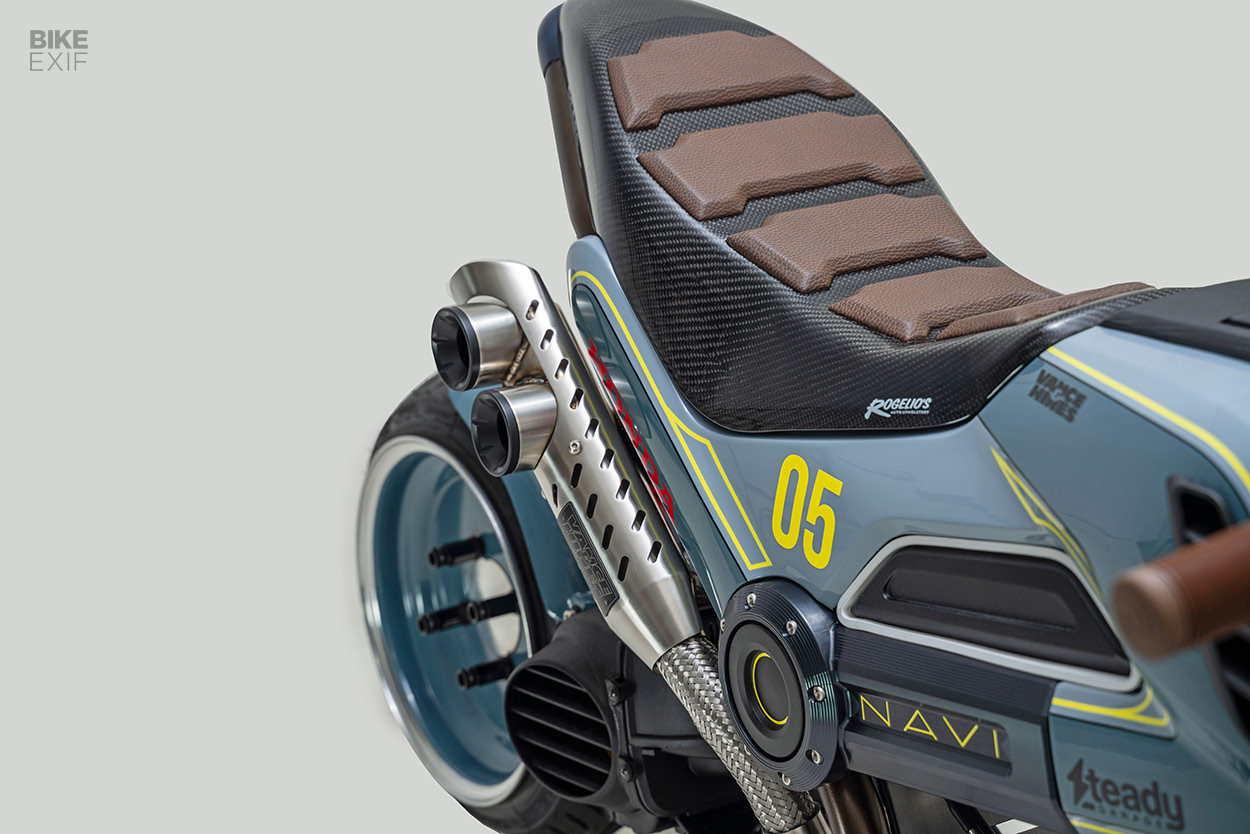 Both shops plan to offer some of the parts they created for sale, and you can even buy a Vance & Hines exhaust for your Navi.

Our friends at Icon Motosports got in on the action too—by creating their own Navi graphics kit that customers will actually be able to get their hands on. They they put together (and filmed) a raucous mini bike ride to show it off.

Does it get any better than this? [Honda Navi]