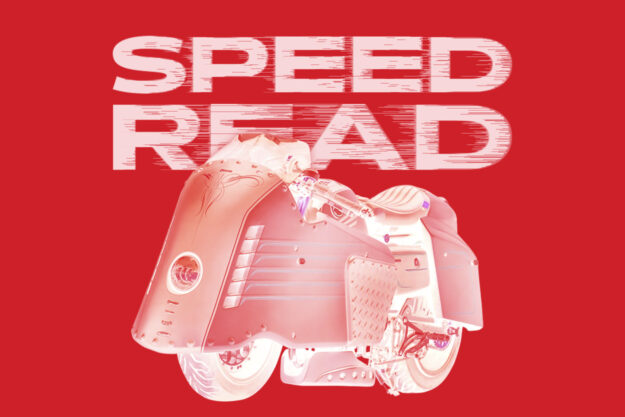 We continue in our quest to bring you the most diverse Speed Read selections we can. This week includes a Honda Monkey inspired by a train, a Suzuki Freewind scrambler and a rocket-powered Harley. Staying with the Motor Co., we finish things off with sad news about the Evo Sportster. 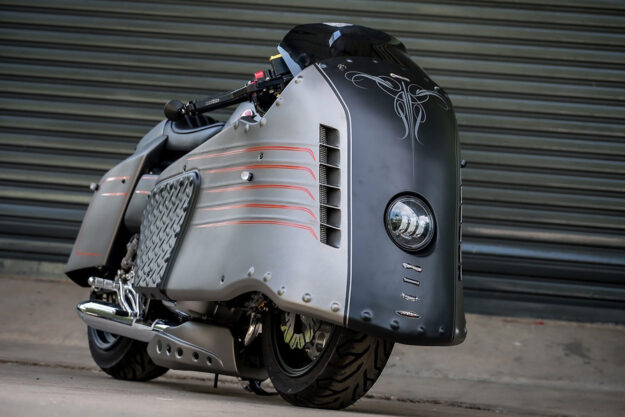 Honda Monkey 125 by MonQey King We love seeing how creative custom builders can get with the Honda Monkey. The modern-day version of the diminutive city bike is based on the Honda Grom, and is cheap, good looking and approachable. It’s no wonder it’s so popular.

Asia is a big market for the Honda Monkey, and the workshops over there do a cracking job at customizing them. This Monkey was built by Chayakrit Kaewwongwan, A.K.A. Winny Boy, from Thailand. He runs Advance Automotive Accessories, MonQey King and a few other aftermarket motorcycle parts stores. 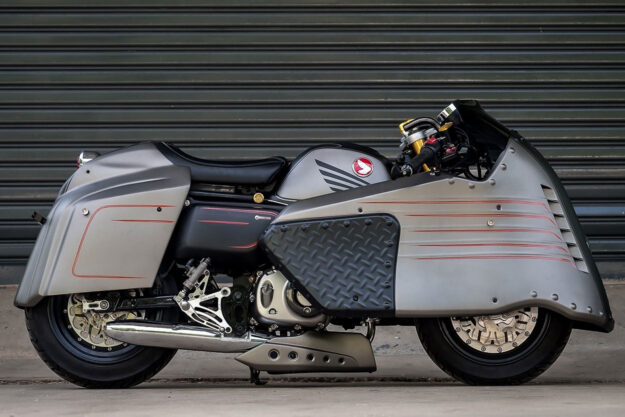 He’s also a big fan of the Honda Monkey, so he decided to build one for the 2022 Bangkok Hot Rod show. Using the extensive knowledge of ABS plastic and manufacturing that he’s amassed while manufacturing parts, Chayakrit built this entire bike in just 10 days. It also helped that he’d designed the same type of bodywork for a custom Honda Dax recently. 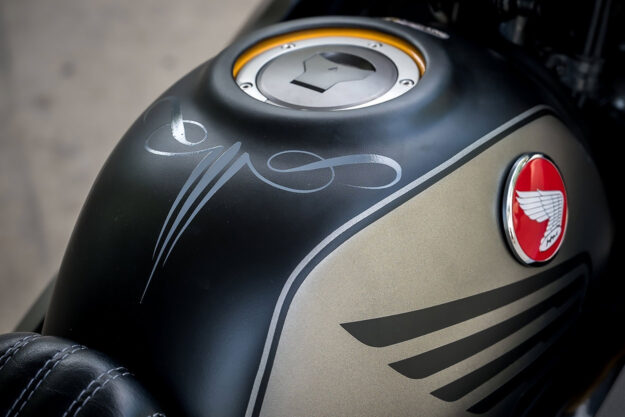 The main inspiration for the bike was, curiously, a train. Specifically, the 1937 Baldwin Locomotive Works Union Pacific P-13 2906. Admittedly, the train is a streamlined work of art and engineering, so it’s easy to see why Chayakrit is loco for this loco.

The dustbin-style fairing, tank cover, side covers, belly pan and rear end were all made from ABS plastic. It’s a material that Chayakrit works with every day and is lightweight, which is essential for such a small bike. Even the diamond-patterned panels on the sides are ABS plastic parts. 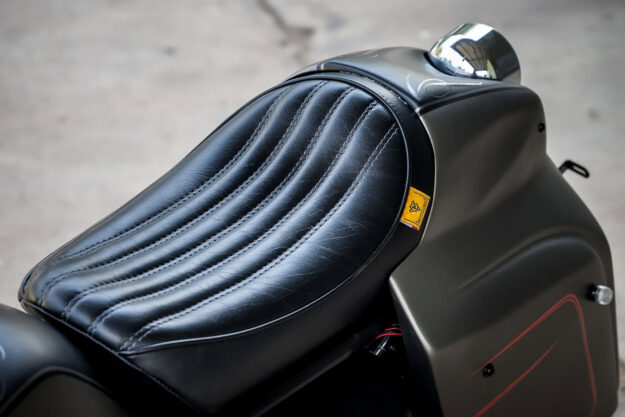 Chayakrit designed the body so that it’d bolt straight to the Monkey, without any cutting or welding. But he did make some other key changes.

The suspension was lowered, with a new set of Murazaki shocks out back. The Monkey wears a set of trick ace-style handlebars, with rear-set pegs and a custom seat to complement the low riding position. Wide D-Project wheels and tires complement the new bodywork. 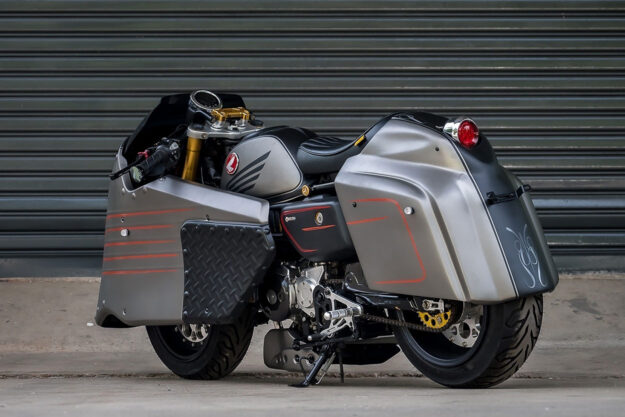 Finished in a custom paint with hints of gold, the results are stunning. We’re not the only ones who like it—Chayakrit took the top spot in the ‘Best Minibike’ category at the 2022 Bangkok Hot Rod Show.

All he needs to do now, is turn this into a kit. [Source] 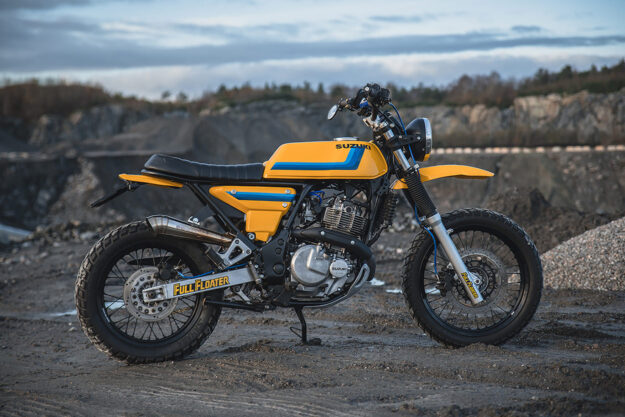 Custom Suzuki XF650 Freewind If you’ve never heard of the Suzuki XF650 Freewind, we don’t blame you—it’s a strange-looking machine, and only formed part of Suzuki’s line-up for a couple of years. It used the engine from the DR650, but sat lower with a different chassis and a 19” front wheel. And its bulbous bodywork didn’t age well.

But when the owner of this Freewind, Peter Aldby of Gothenburg, Sweden first saw it, that bodywork was already in the bin. 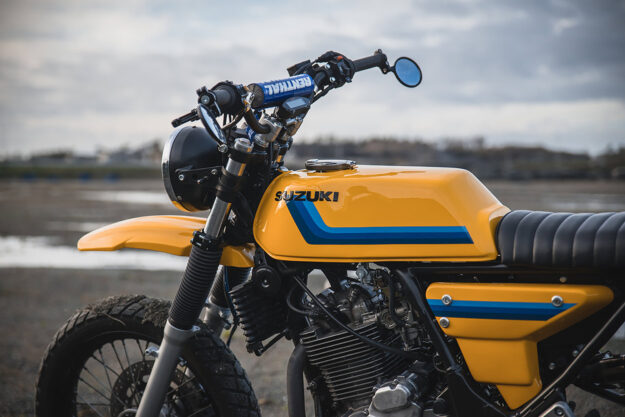 Peter had set out to build himself a functional, good-looking scrambler, and was looking for a suitable donor. While trawling the internet for his first pick, a Honda Dominator, he stumbled across this newly-completed custom Suzuki Freewind. Too good to pass up, Peter bought the bike from its builder, a fellow Swede by the name of Henrik W. 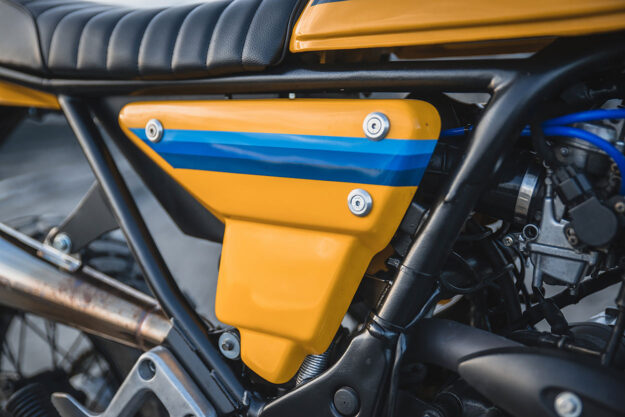 Henrik had swapped the Freewind’s bodywork out for the fuel tank from a 1979 Yamaha RD125, matched to a leather seat on top of a custom subframe. The side covers came from a Yamaha FS1 moped, and hide a small battery and electronics box. 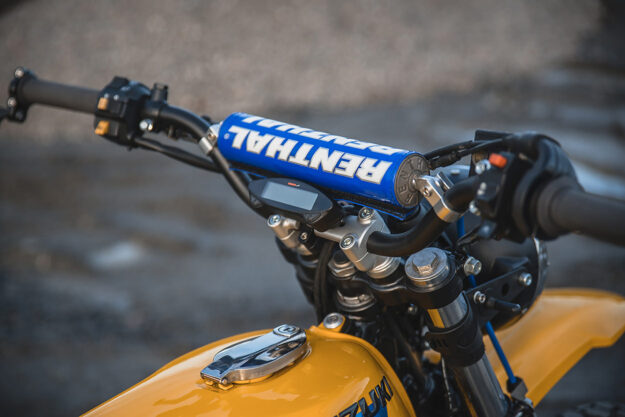 Up front is a motocross-style fender, bolted to the forks below a round headlight from a Honda Hornet 600. The suspension was rebuilt but left mostly stock, along with the DR650-derived engine.

The dashboard was cut off and replaced with a digital Koso EX-02 unit, bolted straight to the handlebar clamp, which now holds a set of Renthal bars. Henrik also added a new bash plate, and an exhaust muffler from Snell. 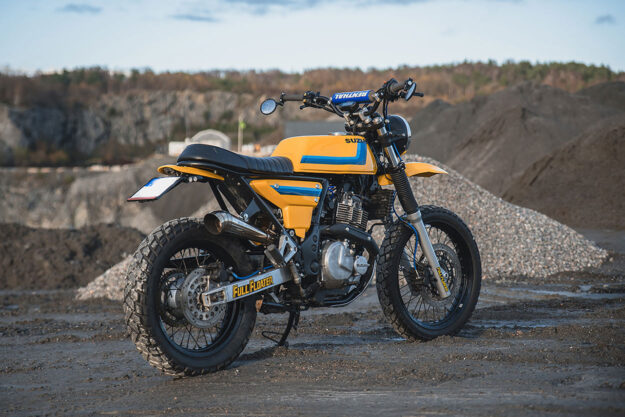 It’s hard to believe that such a stunning bike came from such unassuming beginnings. Peter and Henrik deserve knighthoods for making the world a better place… one Freewind at a time. [Source] 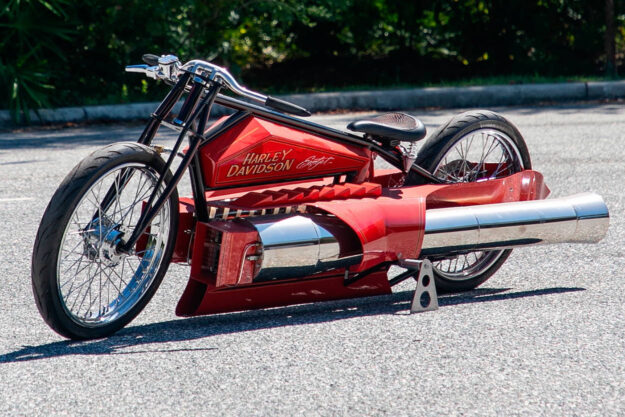 Bob was fascinated by space and aircraft as a child, so he began experimenting with rockets. Now that he’s all grown up, Bob builds rocket-powered vehicles, and has modified everything from hotrods to go-karts. But this jet-powered Harley-Davidson is arguably his most famous creation. 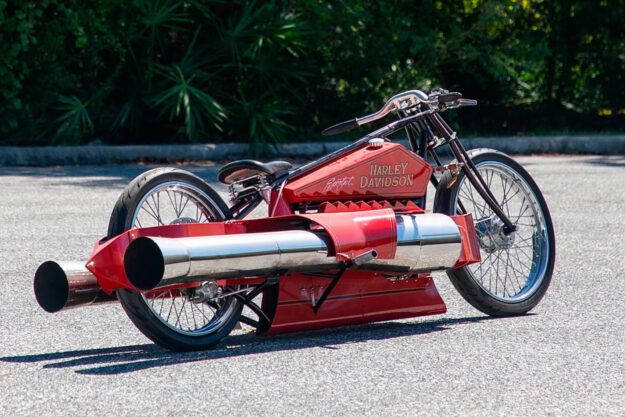 Made to look like an original 1929 Harley Davidson board track racer, the bike is built around a custom-made tubular steel frame. Skinny tires and a sprung saddle are the only comforts here—the front forks and back end are completely rigid. The inverted handlebars look like something from the Wall of Death itself, while stopping power is sent from the bars to the back wheel by way of a custom braking setup.

But this bike is more about the go than the show. It just screams power, with a pair of twin pulse jet rocket engines running down both sides of it. Producing 250 pounds of thrust, they propel the bike (on regular 87RON gasoline) from 0-60 mph in five seconds flat. Red heat shields not only protect the rider’s legs, but the back tire as well.

The bike will be going under the hammer at Mecum in January. If one of our esteemed readers has the means and decides to pick this up, can we please have a go? [Source] 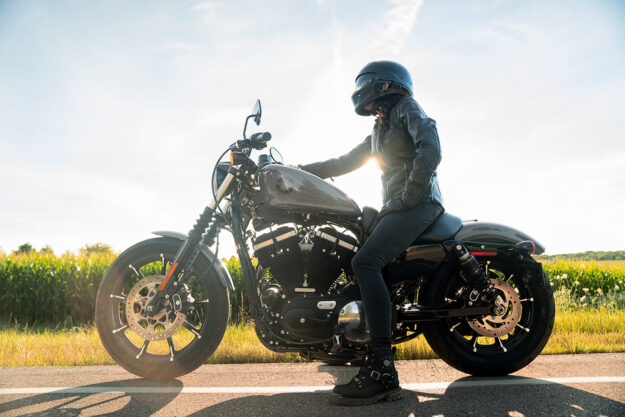 The last Harley-Davidson Evolution Sportster On the 19th of November, 2022, a Gunship Grey Harley-Davidson Sportster Iron 883 rolled off the production line in York, Pennsylvania. That wouldn’t usually be something newsworthy, but that day was different—it was the last time an Evolution-powered Sportster would be produced by the Motor Co.

The Evo Sportster is a motorcycling legend. Yes, it’s agricultural compared to its Japanese (or even other American) counterparts, but the Evo is an icon. Driven more by character and quality, more than a million Evo Sportsters have been made since 1986. 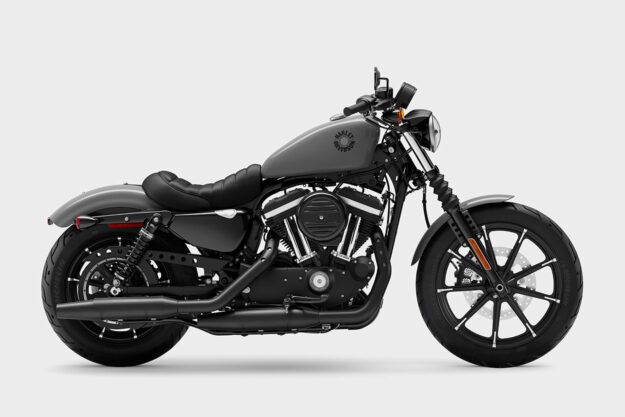 Countless have been customized too, making it one of the most popular platforms on this website, and a favorite of top shops like One Way Machine [below] and Rough Crafts [bottom]. It helps that the Evo Sportster is easy to tear down—and that the aftermarket for it is gigantic.

The Sportster name, which stretches back to 1957, now lives on in the Sportster S and Nightster. Powered by the all-new Revolution Max engine, the new Sporty is a serious departure from the Evo, which hasn’t really changed much since the 80s. The new engine is liquid-cooled, has double overhead camshafts and variable valve timing, and now acts as a stressed member of the frame. 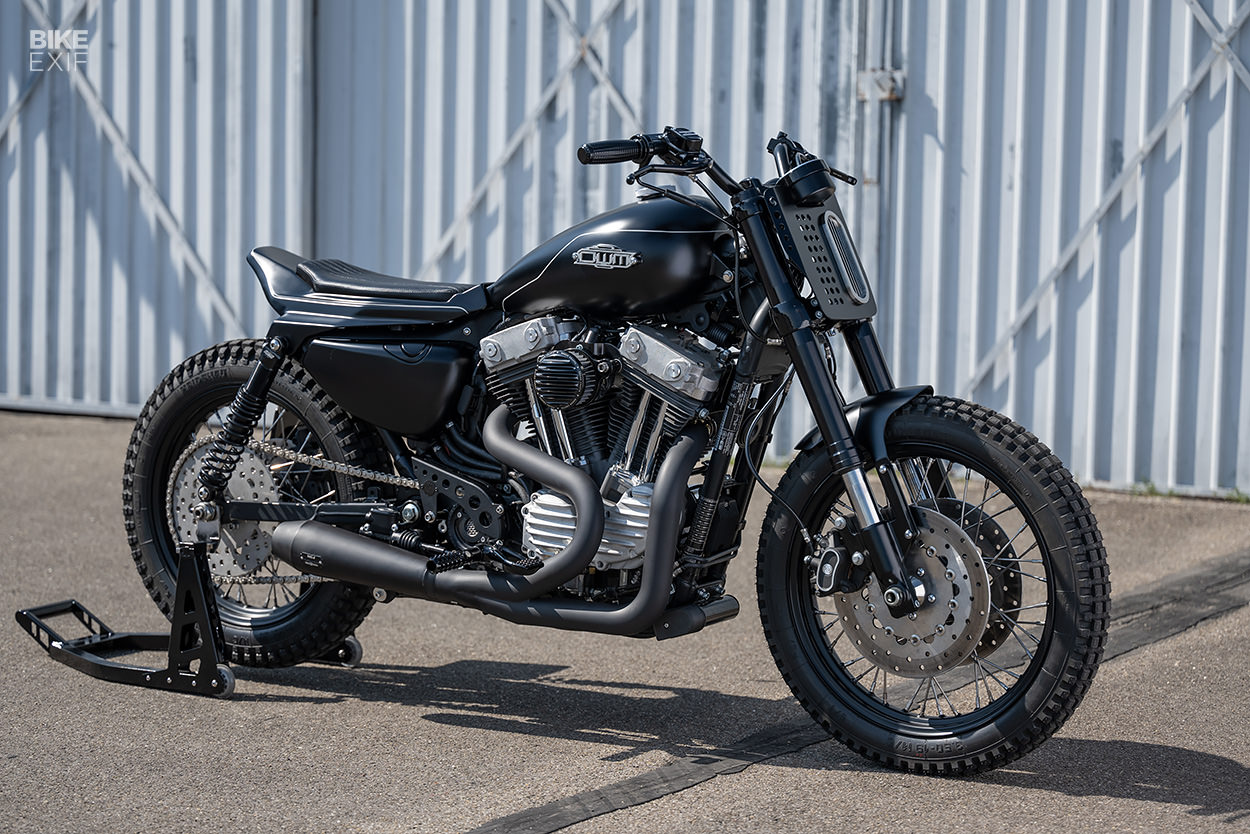 No doubt, it’s the end of an era for the Sportster. Will the Revolution-powered Sportster live as long and be as successful? Will the global custom scene embrace it like they have the Evo?

Only time will tell. Until then, vale Evo Sporty! [Source | Check out our favorite custom Evolution Sportsters] 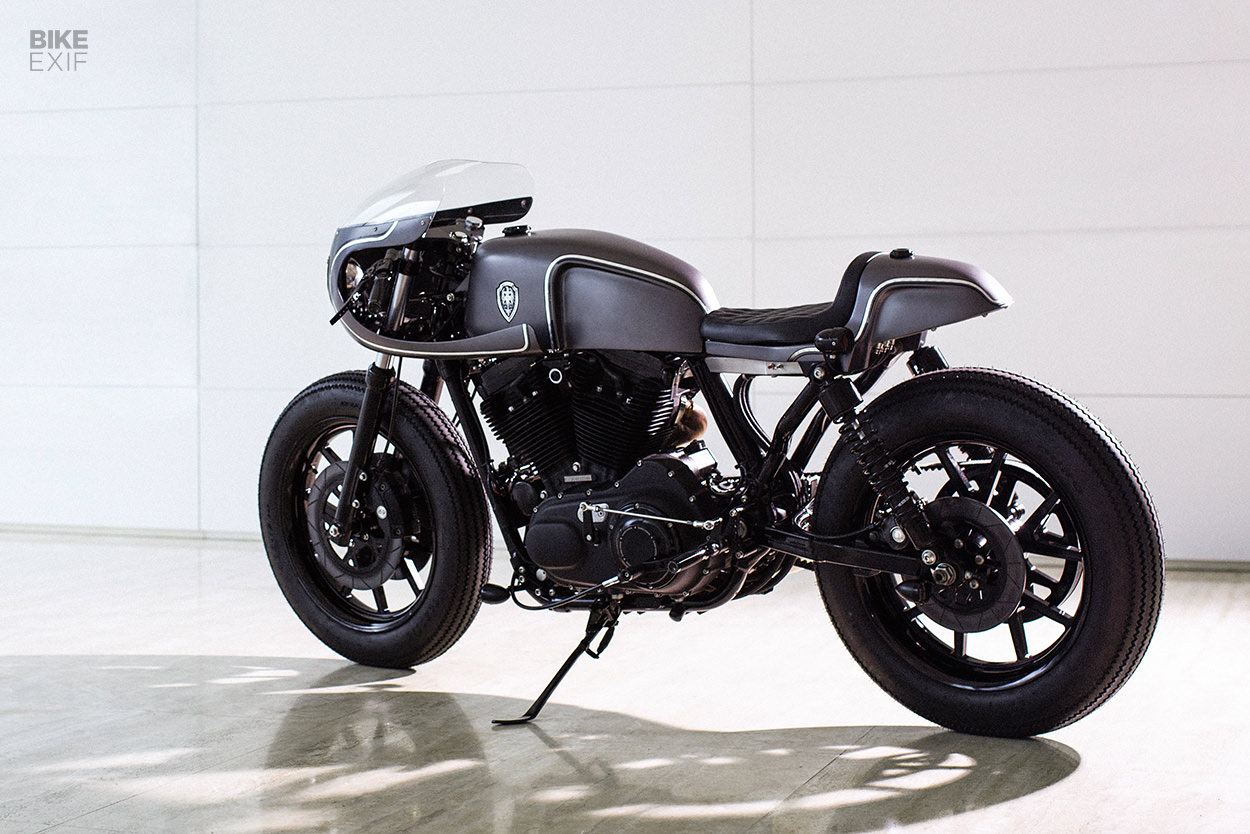