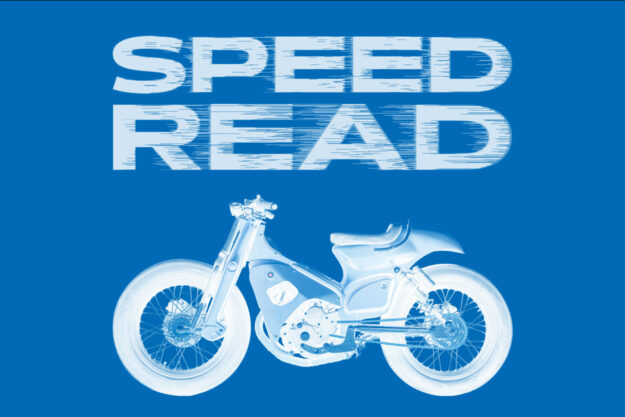 We dive into this weekend’s Speed Read with a quirky Honda Super Cub from Indonesia. We also take a look at the 2023 Triumph Street Triple 765, a Ducati 900SS café racer, and a Suzuki GSX-R1100 from Mr Martini. 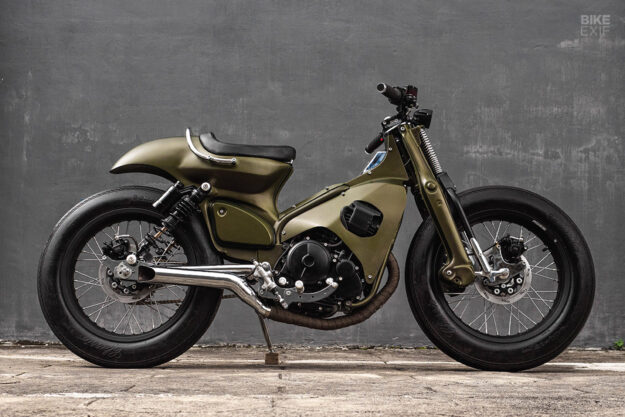 Honda Super Cub by Enggal Modified The deeper down the custom Honda Super Cub rabbit hole we go, the more workshops we find that excel at that particular art form. Based in Banyuwangi, in Indonesia’s East Java region, Enggal Modified has a portfolio packed with zany Cub customs—including a number of ‘BMX Cub’ builds. 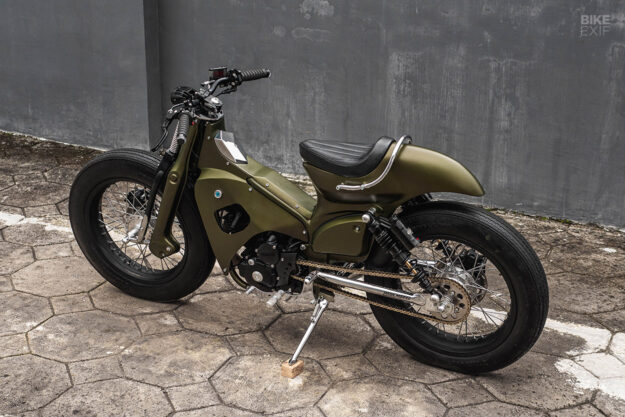 The bike we’re looking at here is not only handsome, but also a lot faster than it looks. That’s because it’s actually powered by the 225 cc engine from a Yamaha Scorpio commuter.

Enggal hasn’t told us precisely what chassis they wedged the Scorpio mill into, but we do have insight into its suspension. The front end is off a Honda C70, but it’s been heavily reworked into a Springer-style arrangement. Meanwhile, the rear’s propped up on a pair of piggyback shocks from Ride It. 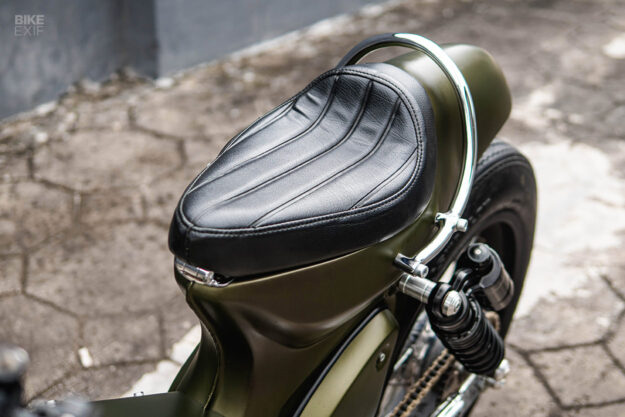 The bodywork is a mix of custom and modified OEM bits. It looks killer too; combining street tracker and café racer elements, but tailoring them to match the scooter’s stature. The Cub’s 17” wheels are wrapped in Swallow tires, adding a hint of vintage style.

Up in the cockpit you’ll find a bicycle stem mated to a set of modified handlebars. The headlight’s a small LED unit, the grips are from Koso, and the switches are aftermarket items. Custom foot controls, and a solo seat with pleated upholstery, finish things off. 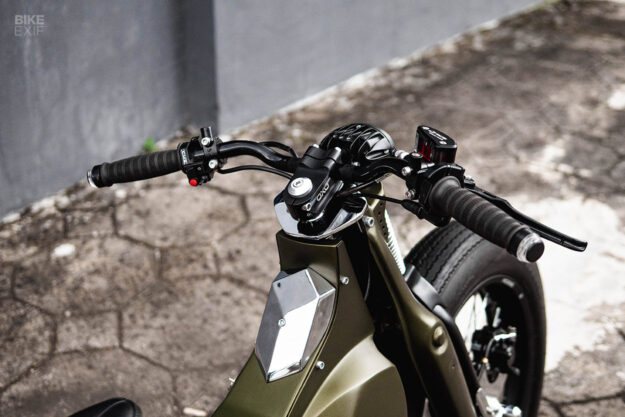 Then there’s the Cub’s metallic olive green paint job, which is both simple and stunning. Sweet little builds like this are the reason we never tire of custom underbone scooters. [Enggal Modified] 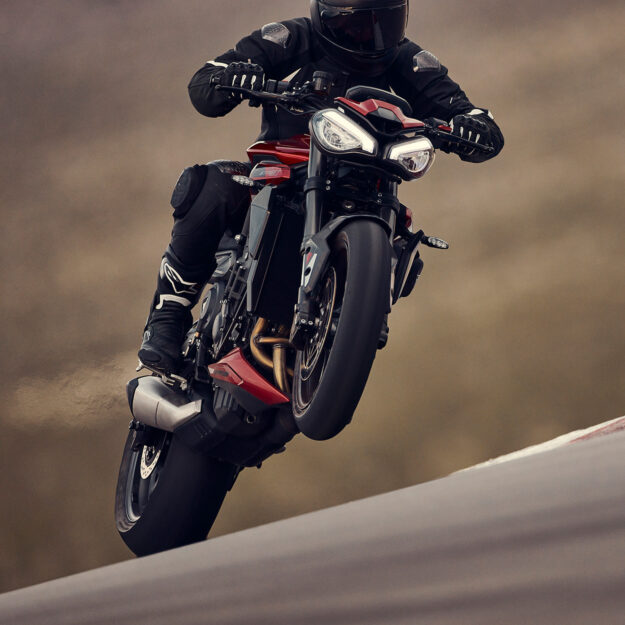 2023 Triumph Street Triple 765 One of the industry’s biggest trade shows, EICMA, kicks off this week. But some brands haven’t been content to wait to show off their latest work. Joining that list is Triumph, with the revised Street Triple 765.

The Street Triple 765 is one of our favorite motorcycles—it’s quick, it looks wild, and it’s almost clairvoyant in the way it responds to rider input. 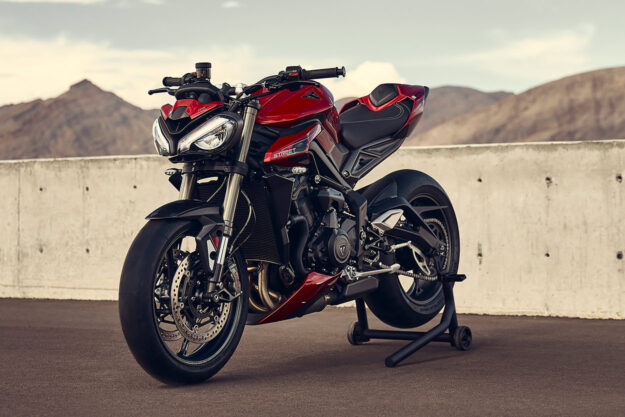 All three of those feature the same engine updates. The Street Triple’s 765 cc triple-cylinder mill now makes 120 PS [118.4 hp] on the R, and 130 PS [128.2 hp] on the RS and Moto2 Edition. The updates include a higher compression ration, and new pistons, con-rods, gudgeon pins, valves and camshafts. 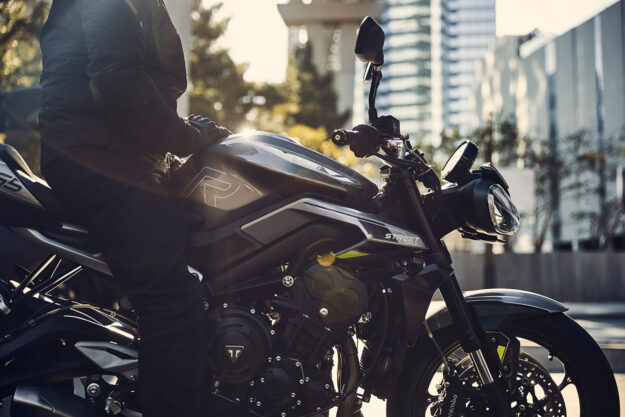 80 Nm of torque peaks at 9,500 rpm, but Triumph say it’s already coming on strong from 7,500 rpm. The new Street Triple also has a revised transmission with shorter ratios, a new slip-and-assist clutch and a quick-shifter as standard.

Triumph has optimized the swingarm too, improving both torsional rigidity and lateral flexibility. The RS and Moto2 Edition benefit further from a steeper rake and raised tail, for even snappier handling. The R and RS are kitted with wider handlebars than before, while the Moto2 Edition actually features clip-on bars, set forward and low. 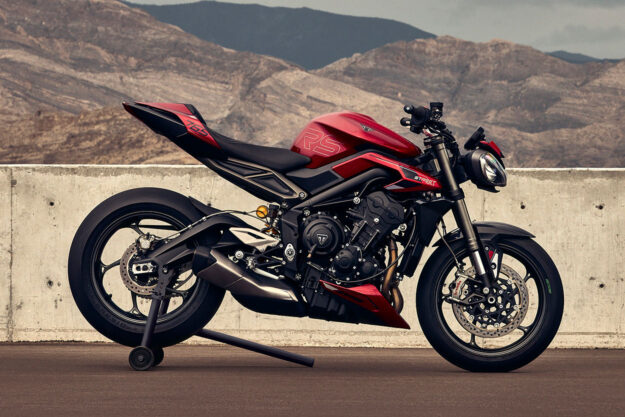 The suspension specs read full Showa (R), Showa forks with an Öhlins shock (RS), and full Öhlins setup (Moto2 Edition). Those are fully adjustable at both ends, for all three bikes.

Brembo brakes are present too, upgraded to the brand’s Styleema system on the front end of the RS and Moto2 Edition. Also improved are the electronics packages, with the two higher-spec bikes sporting new 5” TFT displays. 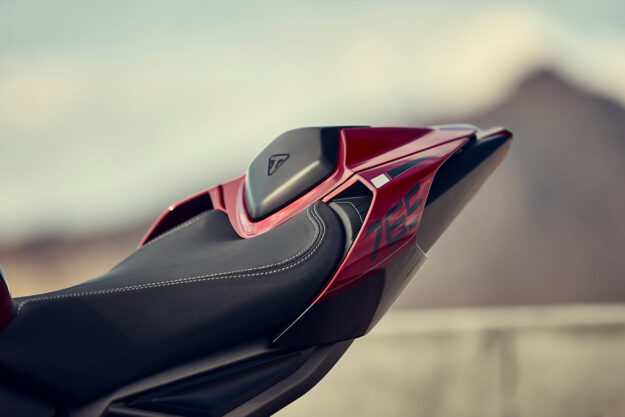 Then there’s the Street Triple’s enhanced styling. It’s not a massive leap forward from the previous model, but it is noticeably more aggressive, and now runs with the same slim headlights as the Speed Triple 1200 RS. The RS also gets a removable passenger seat cover, for a sportier look. 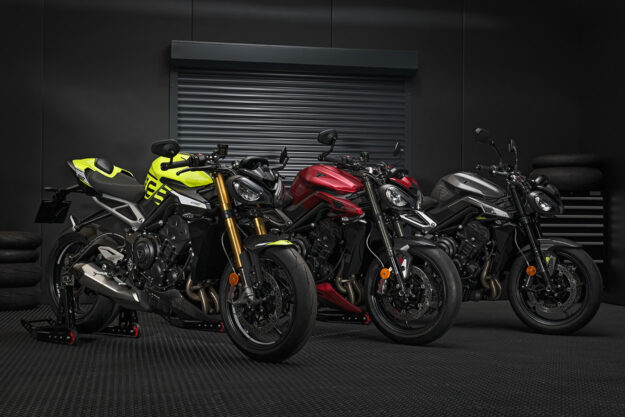 There’s a whole new set of liveries too, but none look quite as spiffy as the ‘Triumph Racing Yellow’ option on the Moto2 Edition. It’s also worth mentioning that this version features a whole whack of carbon parts, and will be limited to 765 units worldwide.

Pricing is yet to be announced, but we’ve already started saving. [Triumph Street Triple 765] 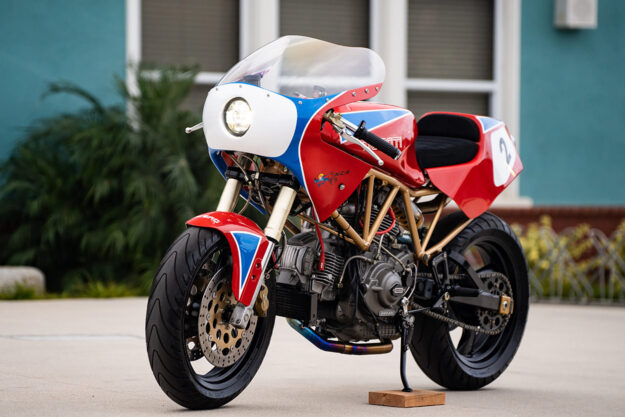 Ducati 900SS by Codex Moto Nick, who builds bikes under the moniker Codex Moto, has a story we can all relate to. He has what he calls a “normie job,” and built this Ducati 900SS simply because he saw an idea that resonated with him. But once he got started, things soon got out of hand.

We’re glad they did though, because this 900SS is about as gorgeous as they come. Nick took inspiration from custom Ducatis by XTR Pepo, Walt Siegl and, in particular, a 900SS by Speedy Siegl Racing (no relation to Walt). 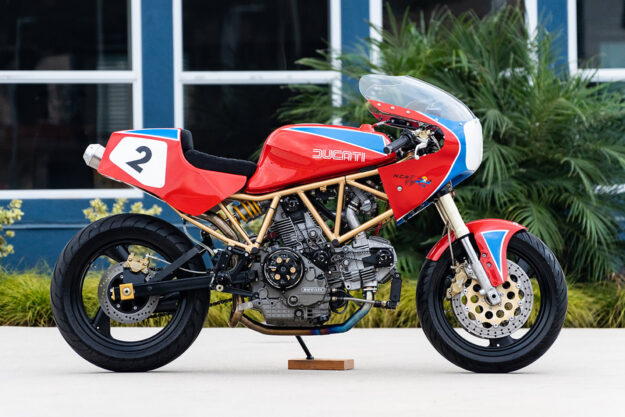 One of Nick’s must-haves was a Yamaha TZ250-style tail piece, with an under-seat muffler. So he shaped a prototype out of foam, and sent it to Catskill Mountain Customs to shape from aluminum. The bike almost ended up with a fiberglass fairing, but Nick thought it best that the parts match—so Catskill shaped that out of aluminum too.

The subframe was modded to accommodate the new tail, before Nick had the entire frame powder-coated gold. If the livery looks familiar, it’s because it was loosely inspired by the legendary 1980s Ducati TT1 racer. 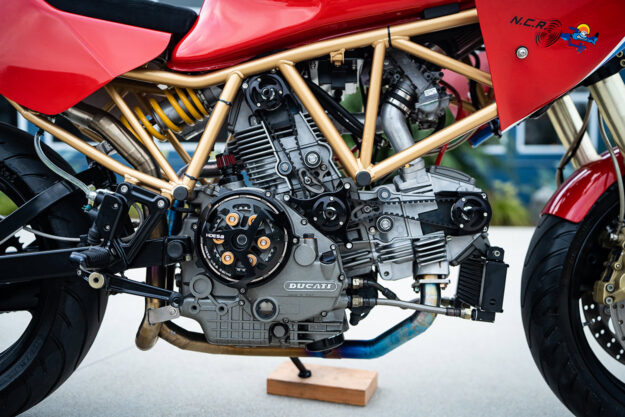 There’s a lot to admire lower down too. Nick treated the motor to a serious clean-up, with key parts finished in black. There’s an open clutch and open belt covers, plus a pair of Keihin FCR41 carbs to add a little pep. The titanium exhaust pipe is from Strada Fab, and was custom-made for this bike. 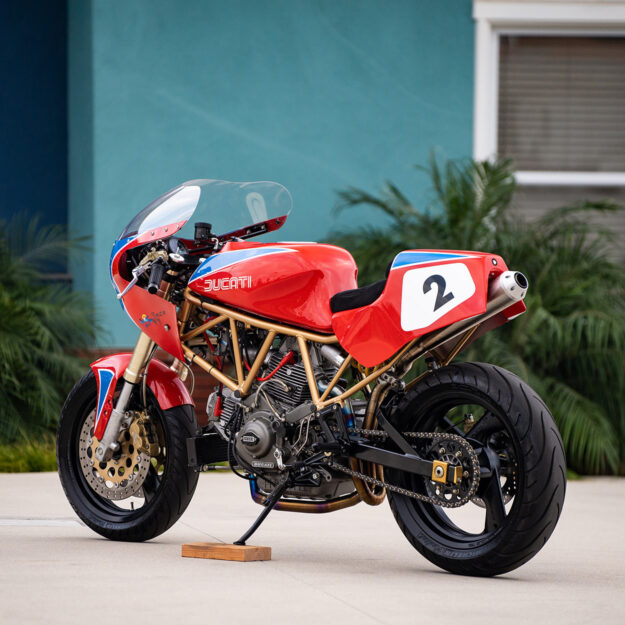 Going deeper, Nick yanked out all the wiring and set the bike up with a smattering of Motogadget parts—including the German brands Chronoclassic speedo. Revival Cycles switches and a JW Speaker headlight round out the list.

If you like what you see, we have good news: Nick’s ready to sell this Ducati and move onto the next one. Hit him up on Instagram if this would look good in your garage (or living room). [Via] 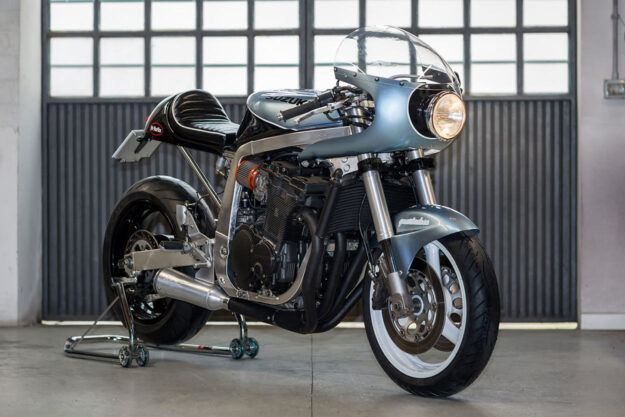 Suzuki GSX-R1100 by Mr Martini No one builds ’em quite like Nicola Martini. The Italian builder marches to the beat of his own drum—but it’s a beat that creates intriguing custom motorcycles. Case in point: this stunning café racer, built with a 1991-model Suzuki GSX-R1100.

Mr Martini’s take on the iconic GSX-R actually amplifies its boxed aluminum frame and big four-cylinder motor, but adds custom bodywork that radically reimagines the genre. With a hint of vintage endurance racing style thrown in, it’s an unlikely mash-up that works brilliantly. 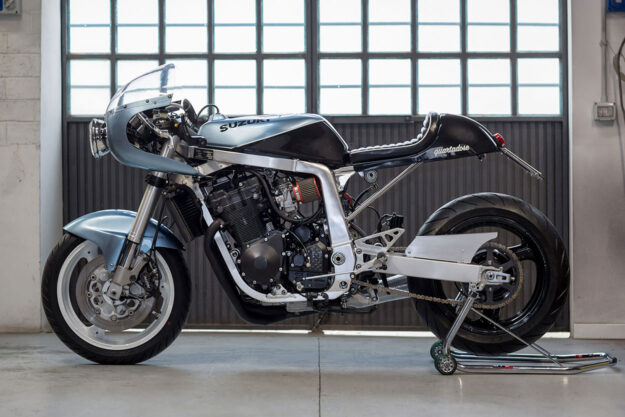 The bike actually came to Mr Martini with a bunch of mods already done, but it was “definitely ugly.” So he stripped it down to expose its distinctive frame, and rebuilt the subframe to neaten it up.

Up top is the GSX-R’s stock fuel tank, now matched to a custom tail section made from fiber-reinforced plastic. It’s capped off with the sort of tuck-and-roll seat that you’ll often see on Mr Martini bikes, with a classic round taillight poking out the back. 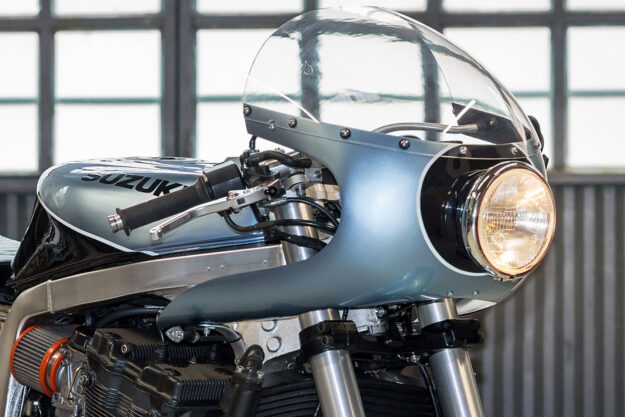 A trimmed Ducati-style fairing does duty out front, mounted on a custom bracket system. A single headlight pokes out the front, with the Suzuki’s OEM dials tucked behind it. Other additions include Tomaselli clip-ons, bar-end mirrors, and tiny LED turn signals. 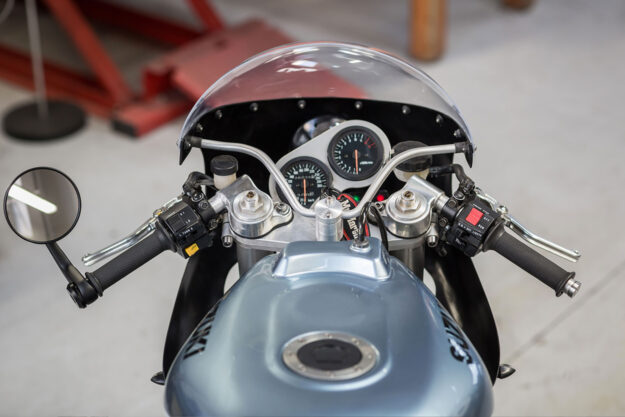 The engine’s stock, but it breathes in through K&N filters, and out through a chunky Supertrapp silencer. As for the paint job, it’s as sublime as you’d expect from Mr Martini. Executed by the paint shop +39Kustom, it combines a metallic blue front half with a black rear half. 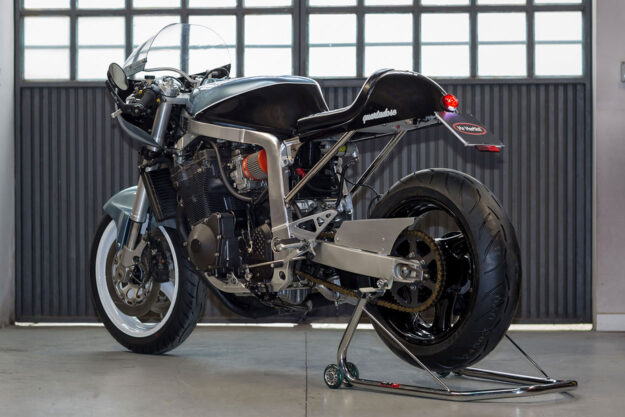