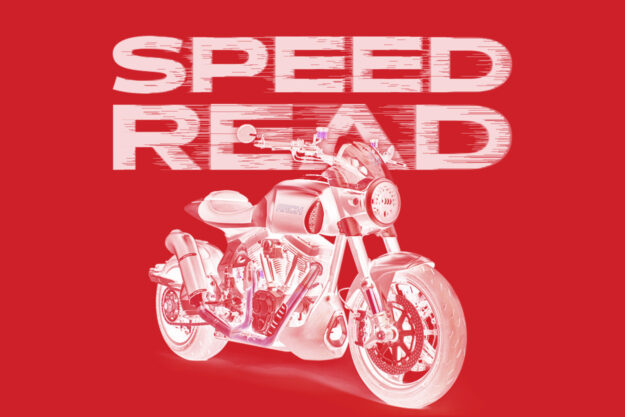 It’s a week for boutique production bikes, as Arch Motorcycle launches the 1s and the new Norton Commando breaks cover. We’ve also got an Indian Chief racer, a Sportster built for desert racing, and a brilliant spoof of one of the best motorcycle films ever made. 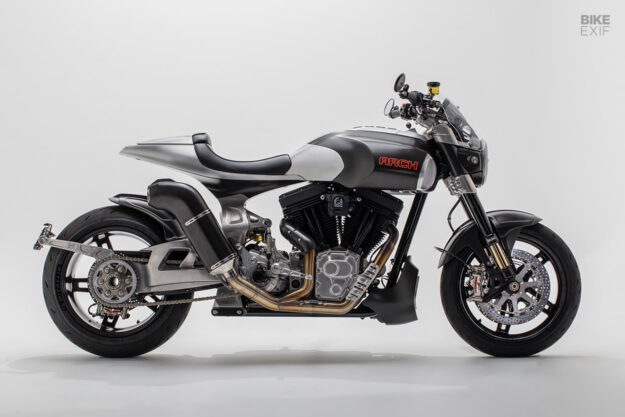 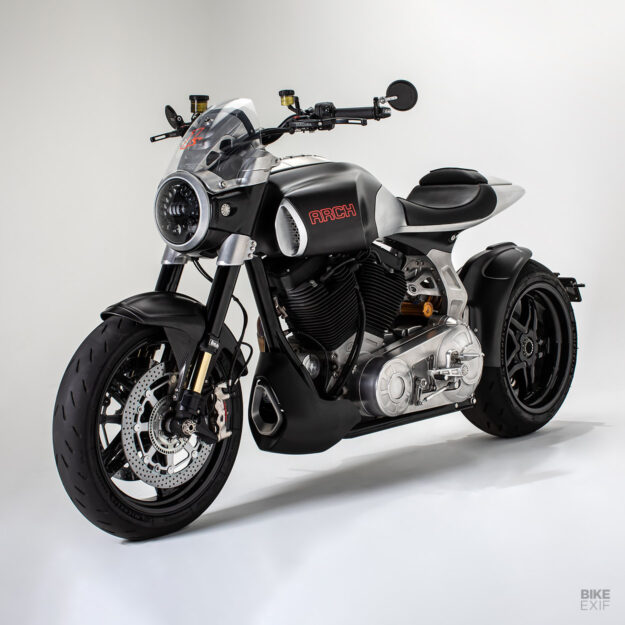 Taking elements of American cruisers, and smashing them together with race- and sport-style machines, the Arch 1s is a unique motorcycle. The company is calling it a ‘Sport Cruiser,’ but this kind of bike transcends classification. 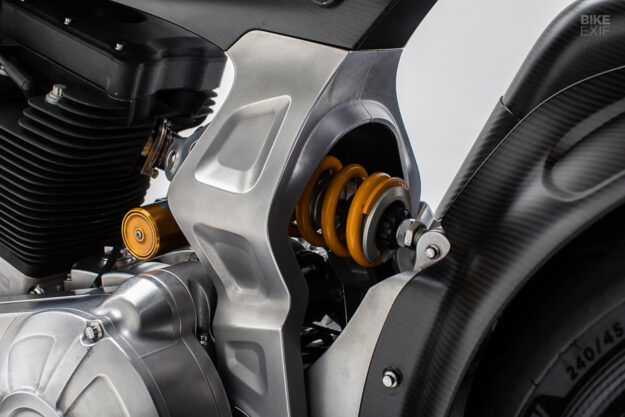 That sounds like a mismatched nightmare, but Arch has pulled off something truly beautiful. It’s the kind of engineering you’d expect from an aerospace engineering company, not an indie motorcycle manufacturer.

The swingarm is also billet aluminum, and it’s the first time Arch has used a single-sided design. There is premium Öhlins suspension both front and rear, and the brakes are from the Swedish brand ISR. 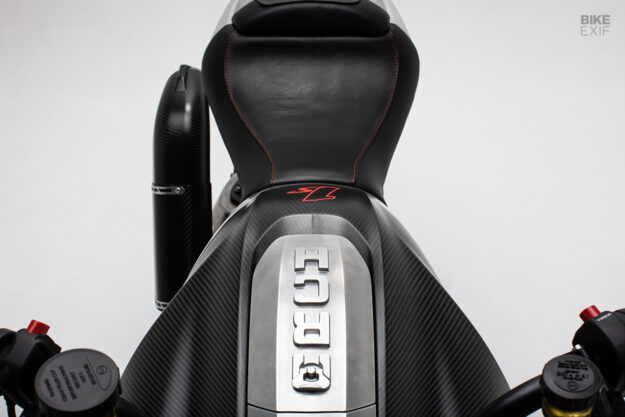 Carbon fiber is used extensively too; the fuel tank side panels, front and rear guards, curvaceous exhaust muffler and ultralight BST wheels are all carbon.

As with all Arch motorcycles, the 1s is completely handmade in Los Angeles by a team of craftsmen. They are all built to order, and customers can spec a variety of ergonomic and engine packages to suit their style. All that, for the eye-watering price of $128,000. 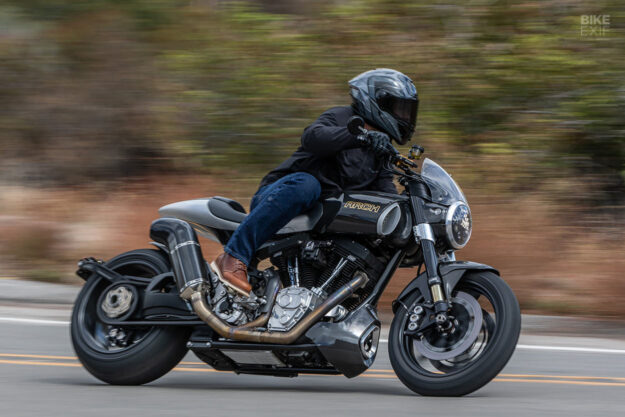 The 1s looks like a sportier offering than the more power cruiser-orientated KRGT-1, and it’s not as flashy as the company’s Method 143 prototype. In fact, it’s my favorite Arch motorcycle to date. [Arch Motorcycle 1s] 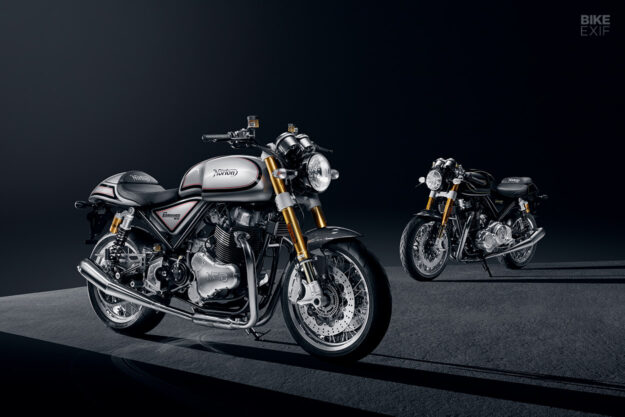 New Norton Commando 961 SP and CR The Norton Commando is loved the world over by people from all walks of life (people like Keanu Reeves, for example). It’s one of the most iconic British motorcycles ever produced—but the Norton name has taken a beating over the last decade. 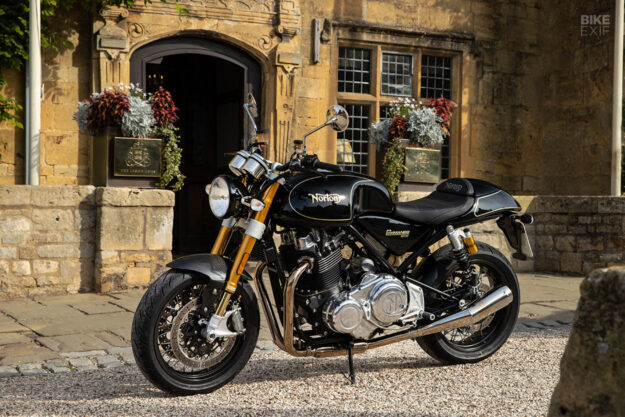 Yes, even though TVS is the third-largest motorcycle producer in India, Norton’s production is staying in Ol’ Blighty. And they’ve just thrown the wraps off their first new bike—the redesigned Norton Commando 961 SP and CR.

Under TVS management, Norton is turning over a new leaf concerning its build quality. The previous generation Commando was plagued with problems that TVS has addressed head-on by re-engineering more than a third of the bike, including its frame, gearbox and cam-train. We can only go by the photos provided, but the fit and finish seem to have been stepped up. 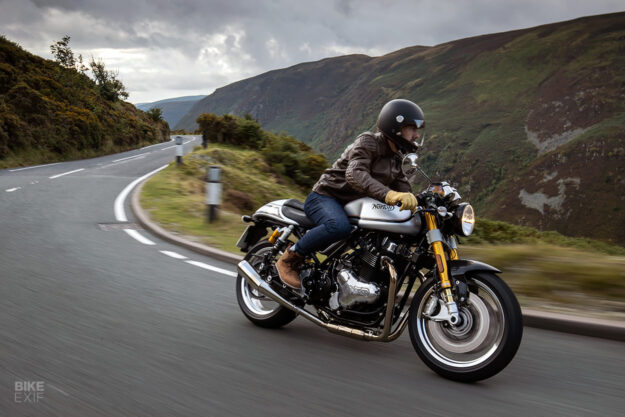 The Commando 961 SP and CR are essentially the same bike, but with two different riding positions. The SP continues the traditional Commando setup with a more upright handlebar system, while the CR features clip-on handlebars. There is a full suite of adjustable Öhlins suspension, while the braking system is courtesy of Brembo. 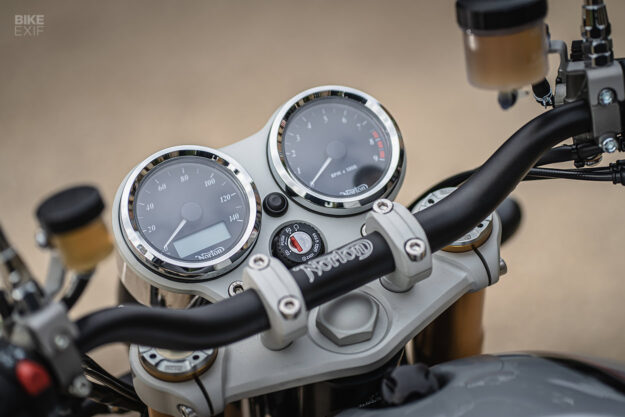 The new bikes are available in two color options—Matrix Black and Manx Platinum, which are both traditional Norton colorways. The air- and oil-cooled 961 cc parallel twin produces 76.8 hp at 7,250 rpm and 81 Nm of torque at 6,300 rpm. That doesn’t sound like much, but it’s classic Commando, even if the re-phased crank now fires at 270 degrees instead of the traditional Norton 360. 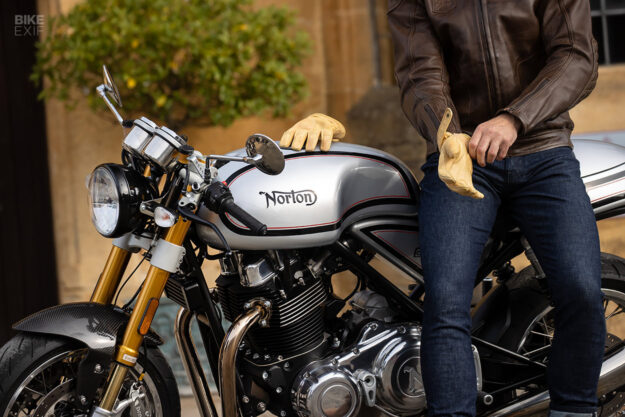 But this bike is not built for spec sheet scientists. It’s built for those who want the feel of a classic Commando, but without the headaches often associated with vintage motorcycles.

It looks like Norton is finally onto a good thing. [Norton Motorcycles] 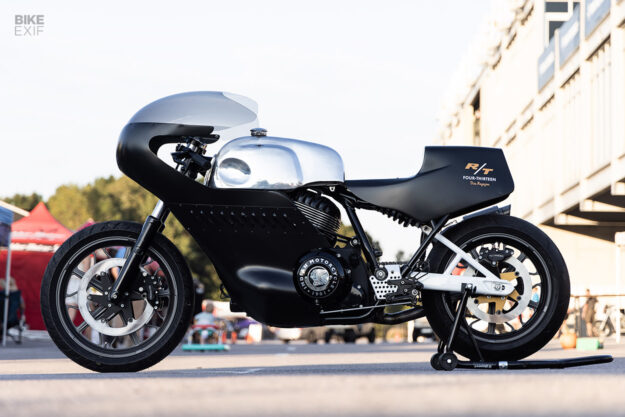 Indian Chief by Noise Cycles and Zach Hindes This intriguing vintage racer-styled Indian Chief makes a strong case for the old adage; “teamwork makes the dream work.” It’s the result of a collaboration between DicE Magazine and Indian Motorcycle, who pulled together some of the best names in the custom bike business to bring it to life. 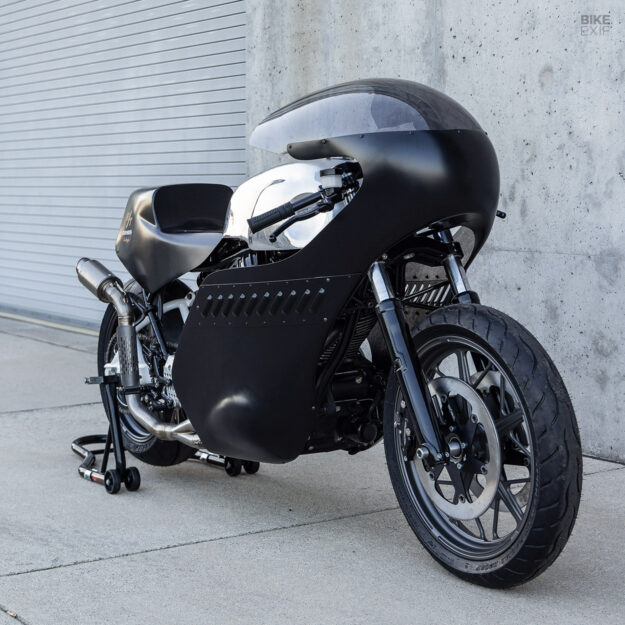 To design the bike, DicE and Indian turned to Scott Jones from Noise Cycles in Nashville, Tennessee. Drawing on Scott’s vast experience in the custom motorcycle world, they decided to take the Chief somewhere you’d least expect it—the racetrack.

Starting with a bone stock Indian Chief Dark Horse, the bodywork was stripped away to reveal the solid underpinnings. Scott points out that cruisers and race bikes have fundamental differences in frame and steering geometries, so he had his work cut out for him. 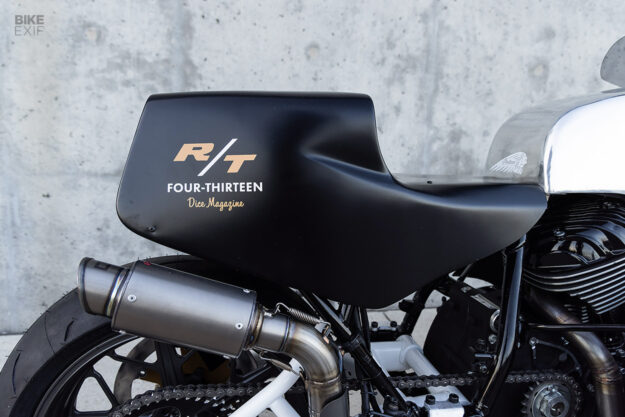 After Scott’s design was finalized and mocked up, the bike went to Zach Hindes of Prism Supply Co. fame, to address the frame and fabrication. An alloy tank was made by hand and polished to a mirror shine. The fairing is a vintage unit from the 1970s that Zach modified to fit.

The modified rear fairing is also from the 70s, and now sits on top of a custom subframe. Going for a sportbike style, the twin shock rear was replaced with a mono-shock. Knowing the heavy bike would be thrown around a racetrack with reckless abandon, Zach beefed up the subframe to account for the extra stresses. 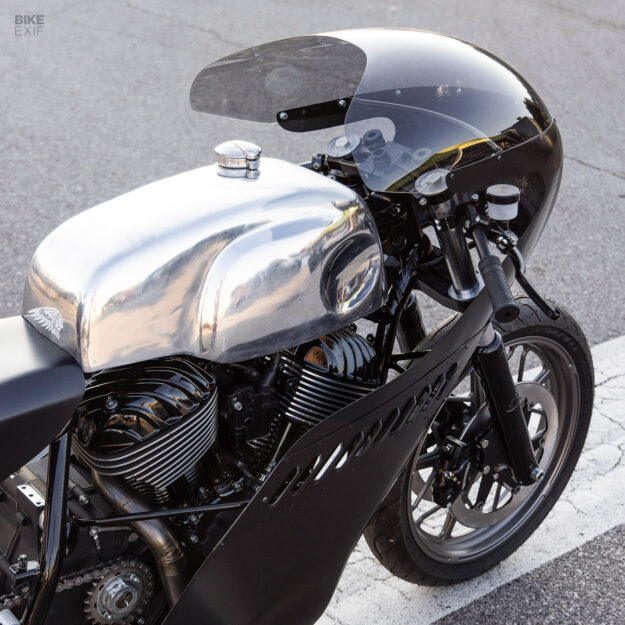 Roland Sands sent over a set of custom-made wheels (19” front and 17” rear), along with new rear-set mounts for the build. The front forks were modified to fit a second brake disc, provided by Beringer, along with all the other braking components. Sticky Dunlop Sportmax tires replace the factory options.

The engine was left alone, but the team couldn’t resist the custom stainless steel exhaust system made by Zach. The 111 ci twin produces a mighty bellow from the Racefit muffler. 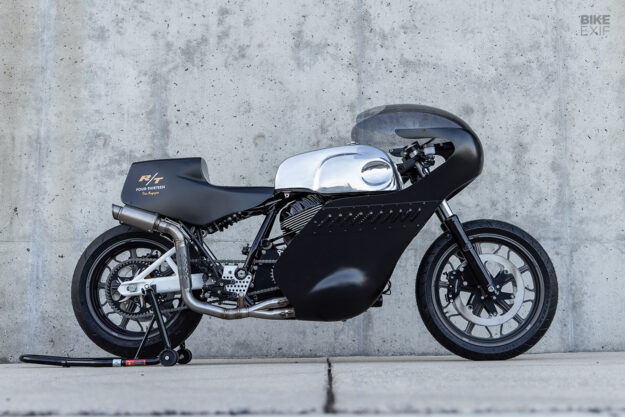 From lazy cruiser to fire-breathing track weapon, this built team is a match made in heaven. But they’re not done yet… next, the bike will go to the inimitable Ornamental Conifer for paint.

Stay tuned if, like us, you can’t wait to see how it turns out. [Indian Motorcycle | Images by Scott G Toepfer] 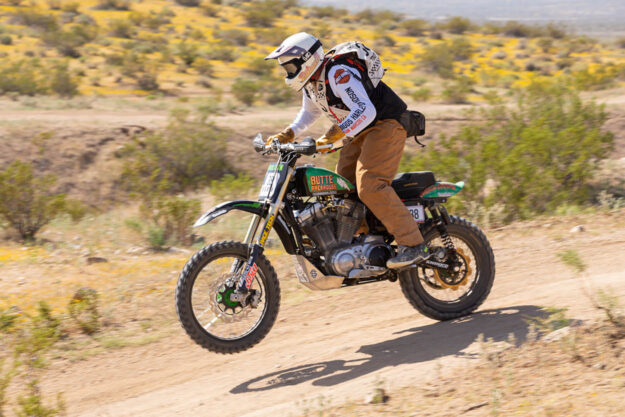 Harley-Davidson Sportster by Good Times Racing There’s something about a Sportster dressed up as a dirt bike that just feels right. Maybe it’s the sheer impracticality, or just the aesthetic awesomeness.

Whatever the reason, I’ve got a soft spot for dual-Sporties. And ever since the AMA added a ‘Hooligan’ class to the National Hare and Hound Championship in the States, it’s become common to see big bikes on grids usually populated by purpose-built dirt bikes. 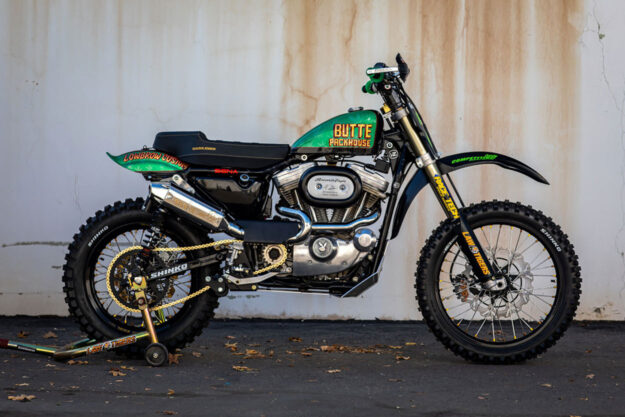 This is the ‘Bajarley’—a 1995 Harley-Davidson Sportster 883, heavily modified by Rich Silva of Good Times Racing. Starting at the business end, it wears a set of Honda CRF450 forks with RaceTech internals and a Scotts Performance steering damper. The 21” front and 18” rear wheels are from Dubya USA, and the knobbly tires and tubes are from Shinko.

The 17.5” piggyback rear shocks are from Racetech and the rear fender is from Lowbrow Customs, who also supplied the fuel tank and cap. The outlandish paint was laid down by Donnie Walker Jnr, with lettering by Bill Walker. 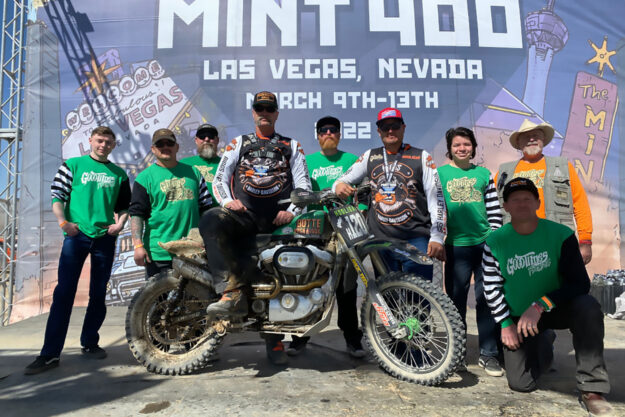 The stock Harley seat had to go, and was replaced with a Vyrus Moto x Saddlemen Sportster motocross seat. Stealth Pipes provided the stainless steel high-mount scrambler exhaust, and a custom-made bash plate was bolted on.

Even though it looks like a showpiece, this bike has been put to good use. Rich and his teammate Joey Elms have raced the Mint 400 twice on the Bajarley, finishing fifth in 2021, following up with a third place in 2022. Rich also took third place at the Biltwell 100 in 2022. [Source] 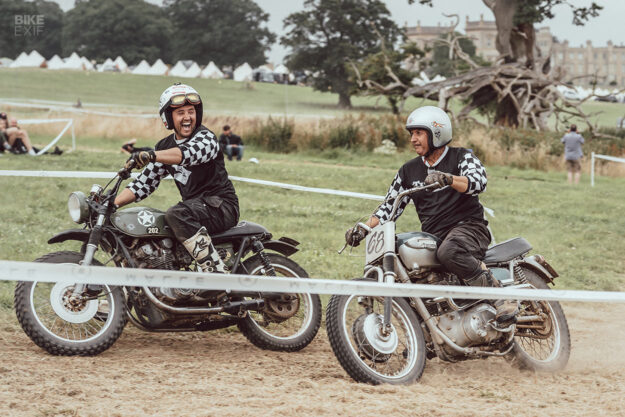 On Any Other Sunday No, that’s not a typo. This isn’t the revered motorcycle film, On Any Sunday. It’s On Any Other Sunday—a spoof by Hoxton Moto, based on Mert Lawwill’s segment from Bruce Brown’s iconic 1970s documentary.

Hoxton followed everyman, Dave, to the Malle Mile in the UK recently, and filmed his shenanigans. Dave is a 31-year-old truck driver; an average guy that races a Honda Cub and a Suzuki GS400 for kicks. A regular Malle Mile attendee, he was the perfect subject for Hoxton’s short film. 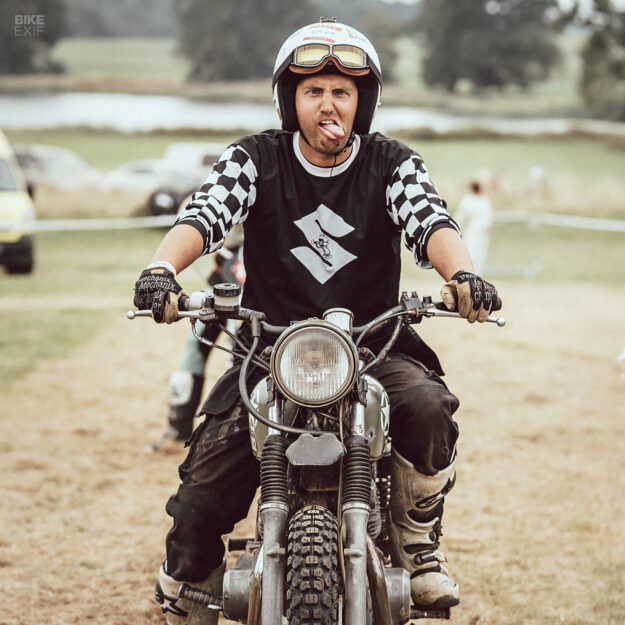 “We adapted the original script of the Mert Lawwill sequences, and mimicked the visual set-ups and structure, trying to be as loyal to the original as our non-existent budget allowed,” explains the film’s producer, Shaun.

“Dave brings a natural comedy to his scenes. The original opening reveal of a man walking down a street, the workshop and traveling shots and the tire modification sequences were direct from the original.” 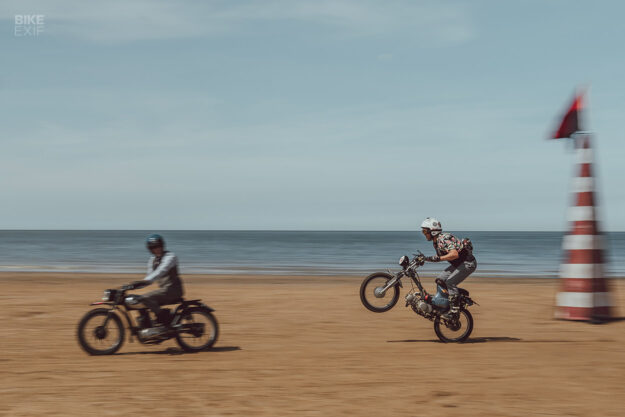 “Dave doesn’t have the huge fan base of Mert Lawwill, but his mates were happy to step in as spoof ‘fans.’ Dave’s wife has a tongue in cheek role when we see her absolutely delighted to see the back of Dave as he leaves home to compete. And even Dave’s dad steps in to appear as his coach, friend and father figure.”

Finished off with a 70s soundtrack, and a voiceover by the infamous Ichiban Moto, it’s a smile-inducing slice of Sunday cinema. [Hoxton Moto | Images by Sam Barham]