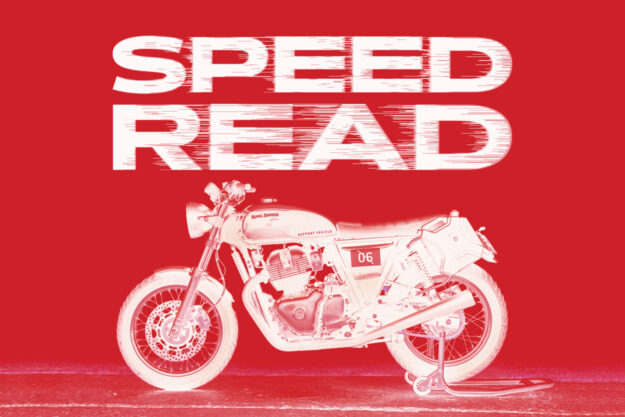 deBolex Engineering’s latest work sees the Royal Enfield Interceptor turned into a stylish alpine rally support vehicle. We also look at a hopped-up Honda Grom, a blown Ducati Monster S4, a Fantic Caballero Rally 500 scrambler, and a chance to own a Aprilia Moto 6.5… if you really want to. 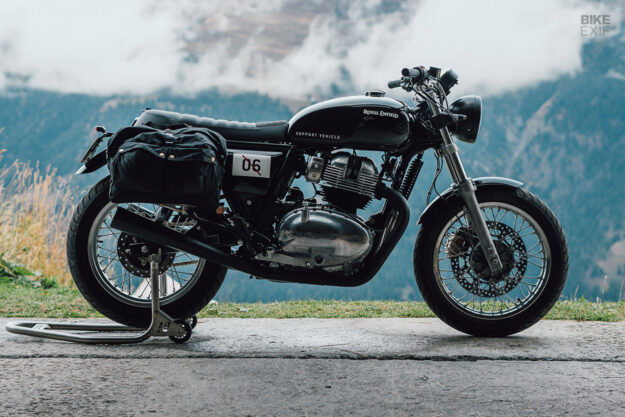 Royal Enfield Interceptor by deBolex Engineering Our friends at deBolex have been hard at work fulfilling orders for their dB25 series of custom Ducati Monsters. But shop founder Calum Pryce-Tidd still managed to carve out time to accompany Malle London on their Great Malle Mountain Rally recently.

Calum wasn’t along as a guest though—he was the official support mechanic. He needed a suitable vehicle to transport himself, some tools and a little extra fuel, so the shop turned out this tidy Royal Enfield Interceptor in the month before the trip. 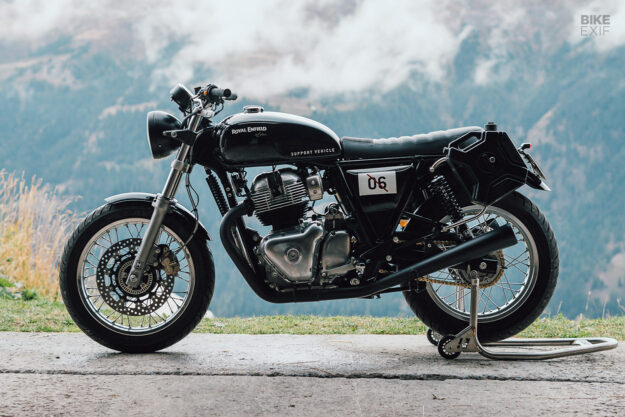 “We’ve always loved the 650 Interceptor,” says Calum, “and we’ve been planning on using it as a base for a build for a long time. It reminds us of motorcycles from a classic era—smaller, lighter, simpler and the perfect platform for some tuning. The style of the engine is timelessly classic and the fundamental lines of the bike are pleasingly balanced.” 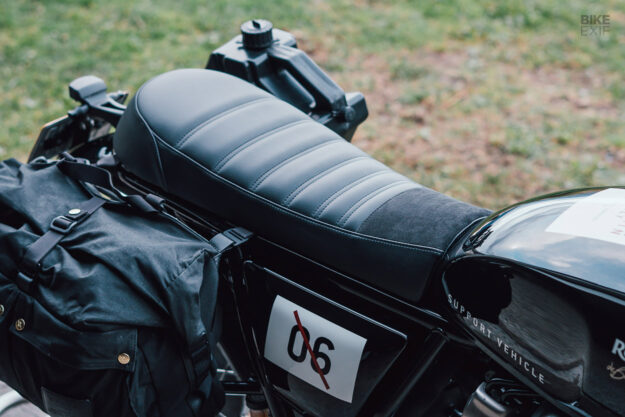 deBolex shortened the Interceptor’s frame a touch, then designed their own CNC-machined tail tidy to clean up the rear end. It houses a slim LED taillight, with a pair of Motogadget LEDs for turn signals. The new seat pan and rear fender were both shaped out of carbon fiber.

Maxton came to the party with new adjustable fork internals, and a set of adjustable rear shocks to raise the bike slightly. deBolex also added custom yokes, and wider polished aluminum rims so that Calum could run wider tires. 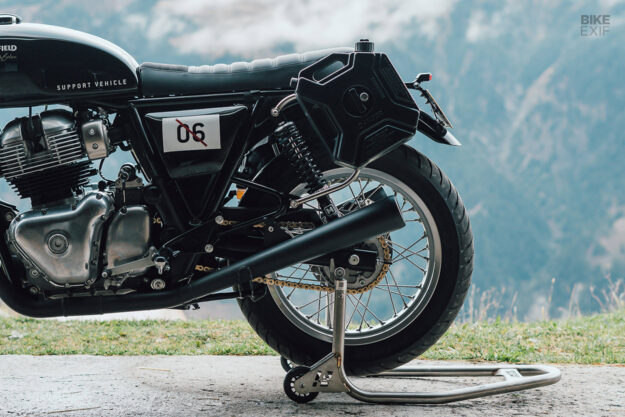 The bike was designed as a ‘quick response’ support vehicle, with a more seriously equipped support van following the pack through the European alps. So it didn’t need to carry too much stuff. Custom racks accommodate a large Malle pannier on the right, and a detachable fuel canister on the left.

The Enfield’s predominantly black paint job is timelessly stunning, but it wasn’t a random pick. deBolex deliberately painted it to match another one of the Rally’s support vehicles: a prototype Morgan Super 3, designed as a collaboration between Malle and Morgan. 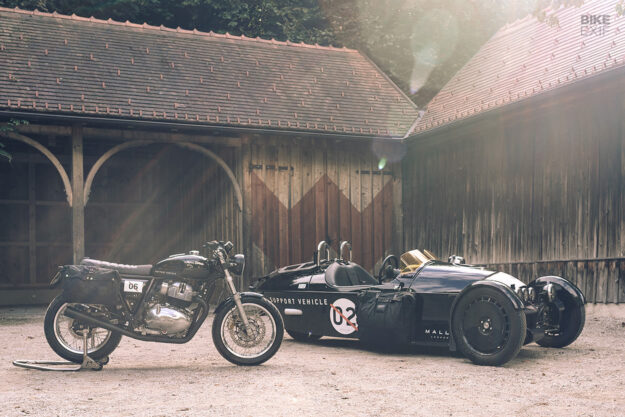 By Calum’s own admission, it’s a mild rework for the Interceptor. But it’s a stylish build nonetheless—and he assures us that deBolex has a heap more mods in the pipeline. 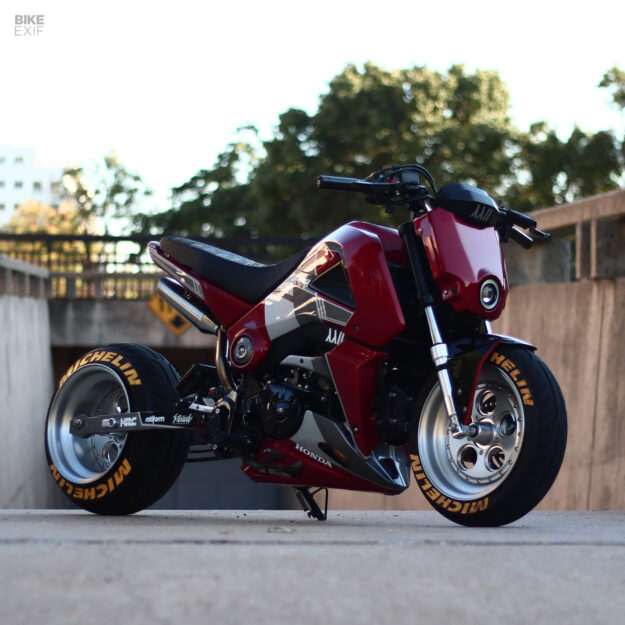 Honda Grom by Alex Poole Based in Wichita, Kansas, 29-year-old Alex Poole is no stranger to small bikes. He learnt how to wrench by helping his dad build mini bikes in their garage—and for the past decade or so, he’s been building customs based on Honda’s cheeky Ruckus pit bike.

Itching for a new challenge, Alex got his hands on a Honda Grom and started formulating ideas. Custom Groms may be new ground for him, but it’s not a new scene—so there are hundreds of aftermarket parts to choose from. 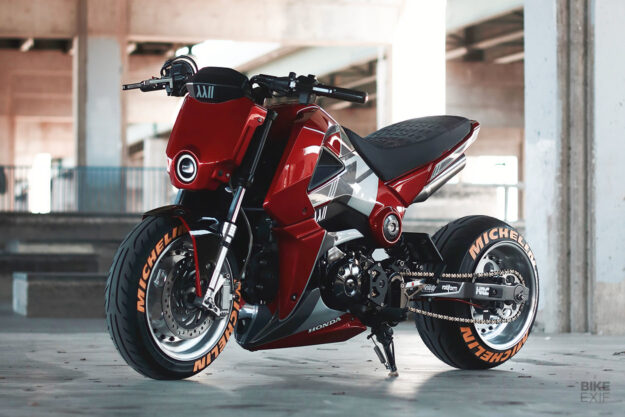 Alex’s build is a mix of off-the shelf and custom bits, masterfully mashed together to create one of the gnarliest custom Groms we’ve seen. First up, he designed a set of custom wheels based on Rotiform’s DIA design, then had them machined to spec. It turned out to be an ambitious project.

For starters, the whopping 8” wide design he had in mind for the back wheel wouldn’t fit with the swingarm. On top of that, Alex had the controversial idea to ditch the right side rear brake, and fabricate a left-side sprocket brake instead. After widening the swingarm by an inch and adding fresh mounting brackets, everything eventually worked. 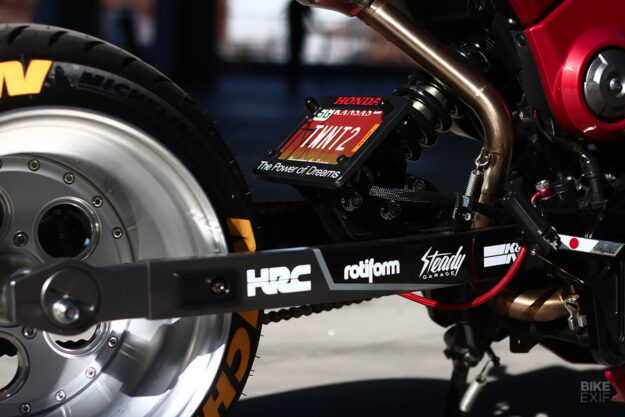 Alex also added a swingarm extension from Mojo Customs, a lowering link and a new adjustable shock from Fastace. The lowered front forks are from Feign, fitted via a Mojo conversion kit for the Ruckus.

Under the hood, Alex treated the engine to an upgraded cam and an ECU tuning chip. The carb was ported and polished, and fitted with a K&N filter. The exhaust is custom, built with welding help from Alex’s dad. 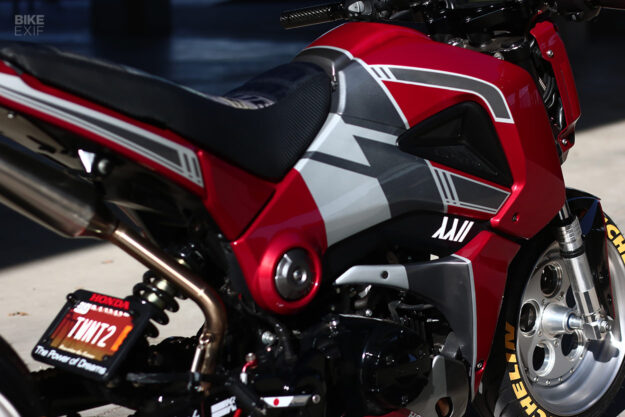 The bodywork was augmented with fiberglass mid fairings from HRP Motors, side scoops from Ermax, and a headlight shroud and belly pan from Petex. Other upgrades include lowered handlebars, a new front fender, and an integrated taillight.

Thanks to past disappointments with suppliers, Alex decided to tackle this bike’s paint job himself. He built a canopy in his back yard, started marking out a design with pin-striping tape, and picked each layer’s color as he went. 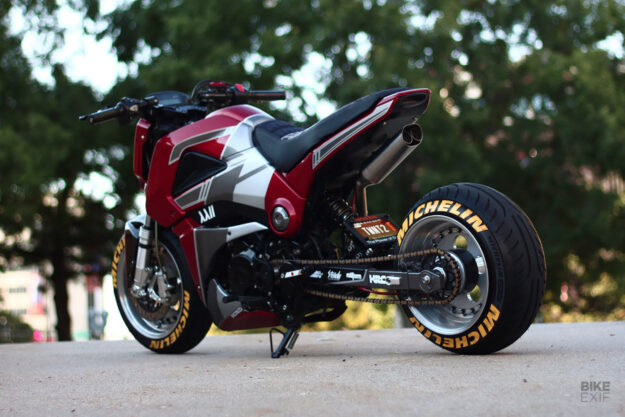 From the custom graphics, to the stretched stance and car-inspired wheels, this Grom feels like the two-wheeled equivalent of JDM street racer. Who else is itching to see what Alex can do with a bigger bike? [Alex Poole Instagram] 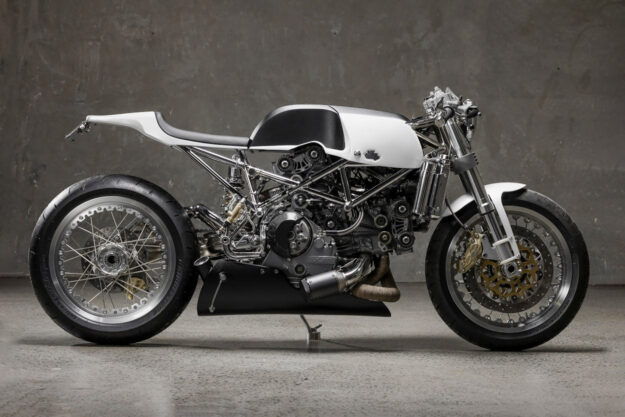 This mental Monster is the work of Australia’s Black Cycles. Their customer had owned the bike, a 2001-model S4, for about three years, when a crack in the fuel tank appeared. He took it to a local shop for repairs and some light custom work, where it sat for almost two years. 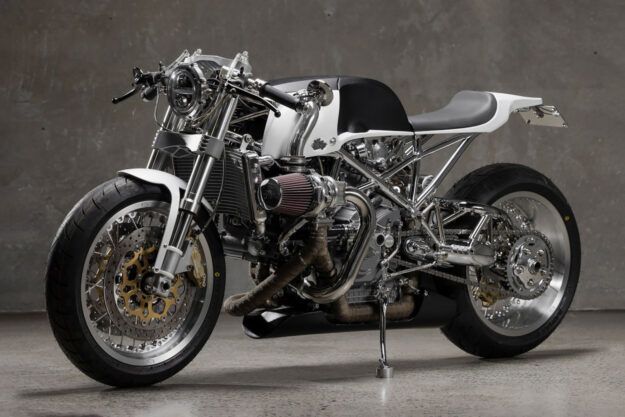 Black Cycles founder, Noel Muller, caught wind of this, and convinced the owner to send his bike up to their shop in Brisbane. Before long, things snowballed—and the list of custom work grew longer.

The Monster now sports all-new bodywork, hand-shaped out of aluminum. Noel actually built one set of body parts—and then decided that the bike needed a turbo. Everything was scrapped, Noel sourced a Garrett turbo, and new bodywork was designed. 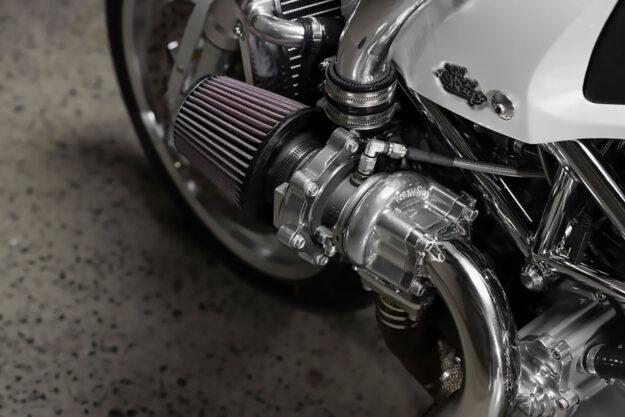 What appears to be the fuel tank is actually a housing for the turbo’s plenum (in the front) and the electronics (in the back). Fuel is held lower down, in a custom-made belly tank. A waspish tail piece rounds out the kit, mounted to the Monster’s modified subframe.

Other custom parts include aftermarket Ducati 996 triple trees, a later model Monster swingarm, clip-ons, rear-sets and more. Black Cycles also fabricated the turbo’s intake and exhaust, and a bunch of one-off bits to make it all work. The finishes are an intoxicating mix of polished surfaces, white, and textured black. 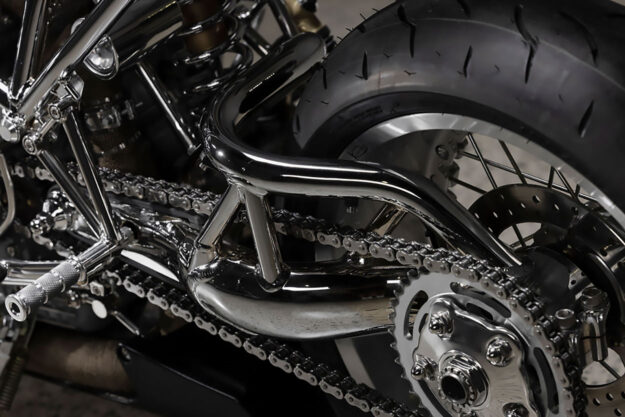 Noel outsourced the engine work to Bike Therapy, and the wiring to Pop Bang Classics. The bike’s currently at Cube Performance Centre, where it’s being treated to a Power Commander and a dyno tune.

There’s no official word on numbers yet, but you can bet it’ll be fast. [More] 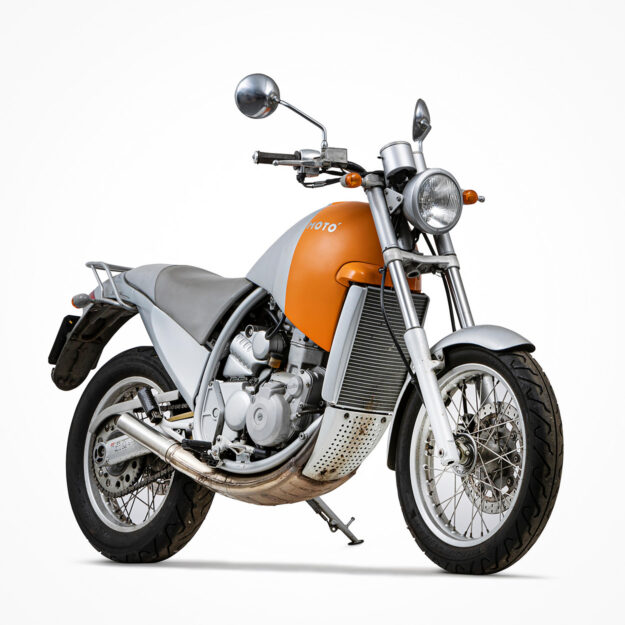 For sale: A 1996 Aprilia Moto 6.5 Once upon a time, a famous industrial designer—known for designing everything from buildings to taps—designed a motorcycle. The motorcycling community lost its collective mind. Some were mad about it, while others were mad that it existed.

Love it or hate it, the Philippe Starck-designed Aprilia Moto 6.5 was, at the very least, memorable. It took the Rotax single-cylinder engine from the Aprilia Pegaso 650, and repackaged it in a new chassis, designed by Starck. The French designer also penned the Moto 6.5’s distinctive bodywork, and its radiator, bash plate and exhaust. 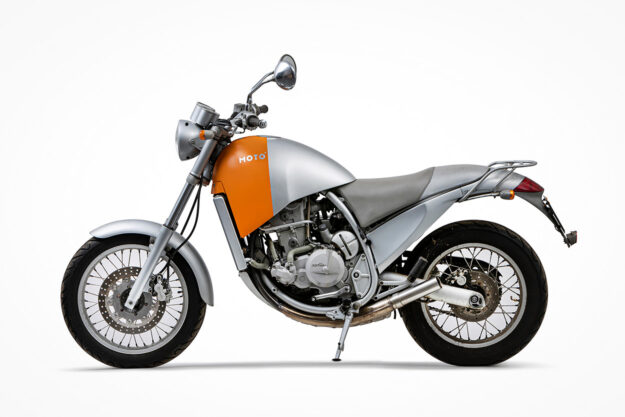 Originally launched in 1995, the Moto 6.5 wasn’t a big seller. Perhaps buyers couldn’t wrap their head around the bike’s unique aesthetic—or perhaps the single-cylinder mill powering it was just too lackluster.

If you miss the Moto 6.5, think it was way ahead of its time or just pine for a 90s Italian thumper, keep an eye on Bonhams’ website. They’ll be auctioning one off soon, with an expected price tag of between $1,600 and $2,700—which pretty much sums up the Moto 6.5’s level of collectability. [More] 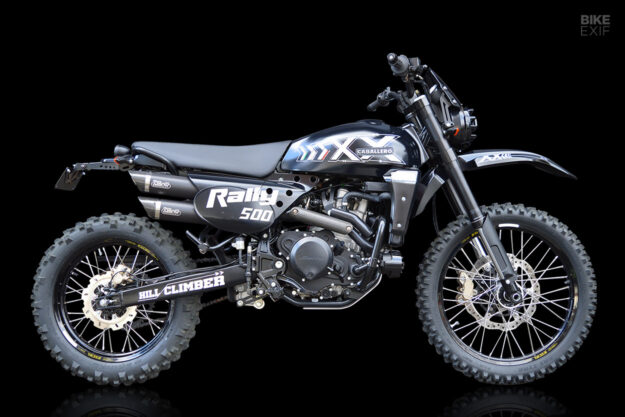 The Fantic Caballero Rally 500 is an attractive scrambler with a 449 cc single-cylinder motor, good for 39.6 hp and 43 Nm. In stock form, it fits right in with bikes like Triumph and Ducati’s own Scramblers. But when the Italian factory commissioned Gasoline to customize one, the crew saw potential for more. 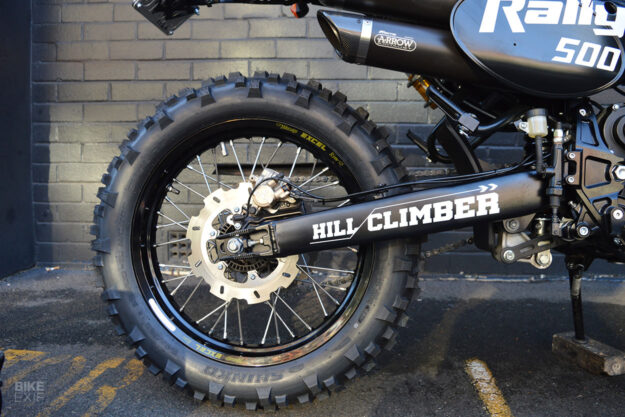 The Rally 500 has a respectable 200 mm of suspension travel at each end—but it rolls on a 19F/17R wheel combo. Gasoline’s first port of call was to give it a boost with a set of custom-laced 21F/18R Excel rims, wrapped in off-road tires from Shinko. They also stretched the swingarm by 4”, so that everything sits just right.

Visually, the Rally 500’s silhouette hasn’t changed much. But Gasoline saw to a slew of small changes that make the bike look just that much more aggressive. 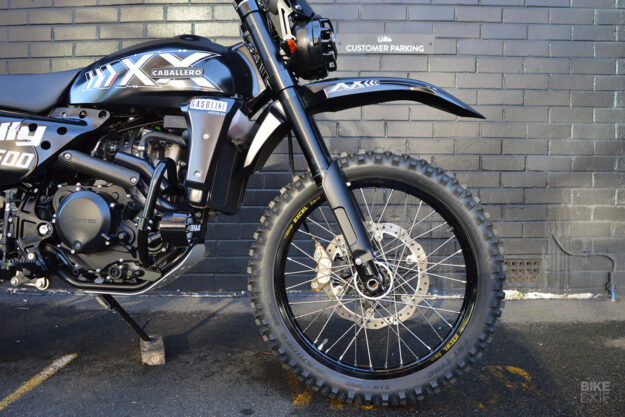 Up front are a bigger aftermarket motocross fender, a PIAA headlight and a tinted fly screen from Dart. PIAA auxiliary lights sit lower down, mounted to new engine guards. The seat was reshaped and re-upholstered with a modern gripper fabric, and the rear was tightened up with a tail tidy kit from Fantic’s own catalog.

Gasoline also installed a performance flywheel, and a ceramic coated exhaust system from Arrow, complete with an upgraded fueling map. The bike is finished mostly in black, save for the custom graphics. 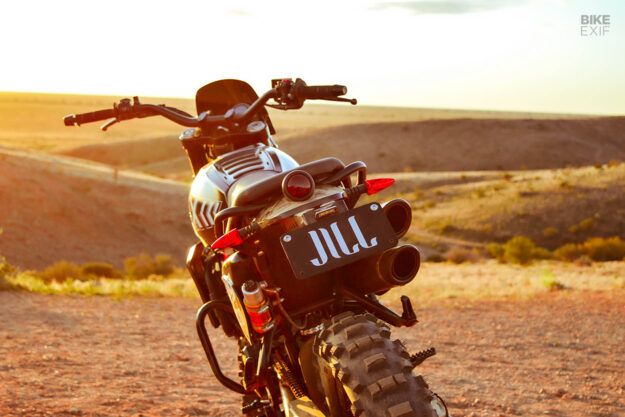 Once the bike was buttoned up, Gasoline loaded it up and headed deep into the Australian desert. With the town of Singleton as their base (which is about a 14 hour drive from Sydney), they produced a short film starring their new build.

It’s called ‘The Road to Red,’ and it’ll be out soon. Until then, you can indulge in the trailer below. [Gasoline Motor Co.]