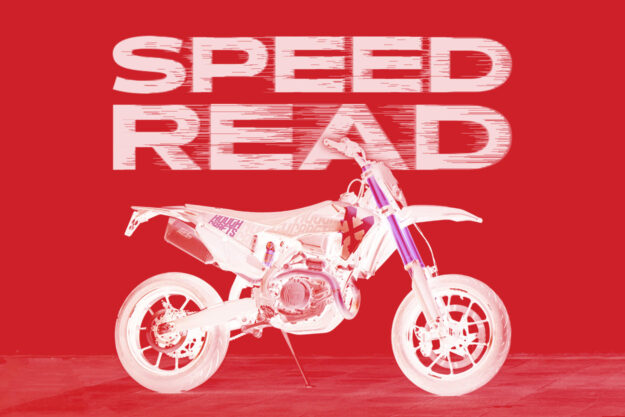 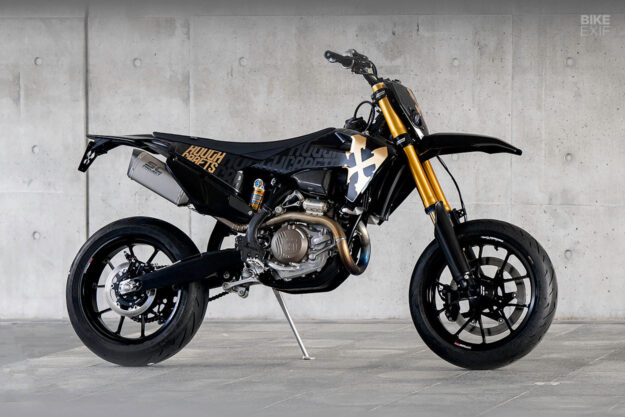 Husqvarna FE501 by Rough Crafts Scrolling through Instagram, our thumbs froze as we came across a lean, lithe and murdered-out Husqvarna supermoto. Standing in front of it was none other than Winston Yeh of Rough Crafts in Taiwan.

We’ve ridden the FE501’s KTM counterpart (most Huskies are just rebadged KTMs), and it’s an impressive machine out the box. It’s basically a 500 cc motocross bike with lights and a license plate—and if we had one in the garage, we probably wouldn’t do much to it. 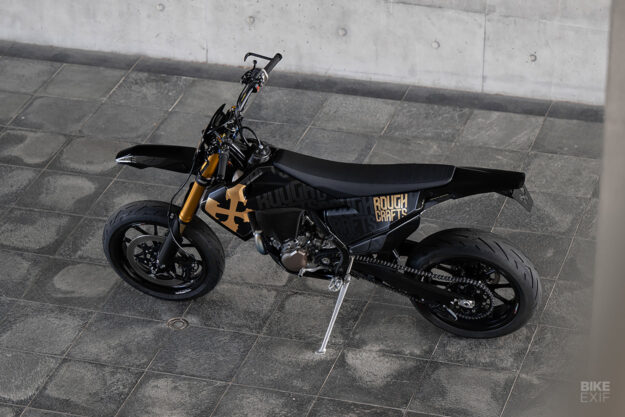 Up front, the factory WP Suspension forks have been replaced with Öhlins RFX48S units and STM Supermoto fork legs. In place of the 21F/18R wheels are a pair of 17” Marchesini M10RR Kompe Motard wheels, fitted with Pirelli Rosso Corsa II tires. Braking forces are supplied by Beringer, with a four-piston caliper and 310 mm disc up front, and a two-piston caliper squeezing a 230 mm disc in the rear. 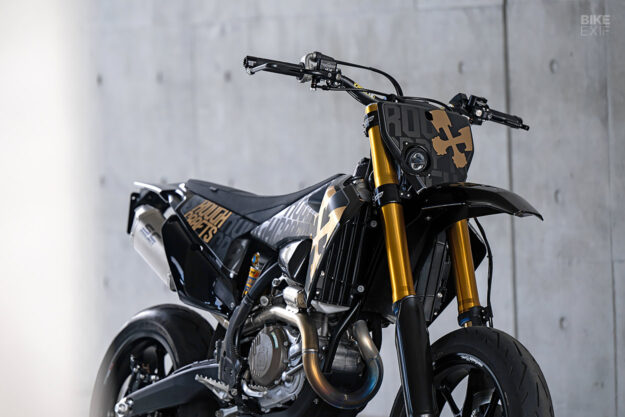 Rough Crafts installed a carbon fuel tank and frame guards from CMT, and had the frame powder-coated black. The headlight is from Koso, housed inside a custom front numberplate. And the front fender is the factory unit, albeit slightly shortened.

The engine’s stock, but the exhaust’s been upgraded; a titanium Akrapovič header is mated to an SC-Project muffler. The seat is custom, and the rear shock is an Öhlins TTX Flow item. 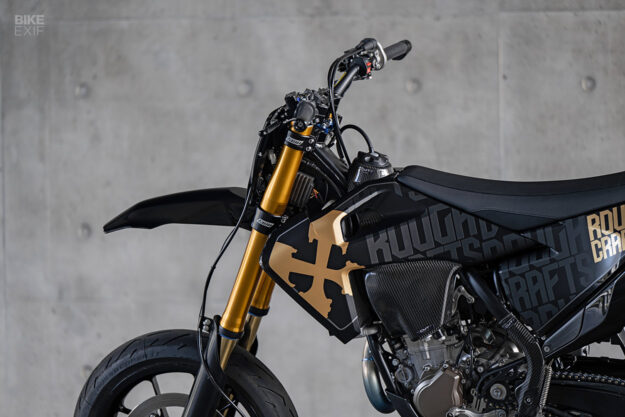 Driving the point home is a stunning custom graphics kit. The factory Husqvarna bodywork has never looked so good, wearing a custom vinyl wrap from MTR Custom Wrapping. The black and gold livery matches the wheels and Öhlins suspension perfectly.

It’s narrow, light, powerful and it looks damn good. Should Rough Crafts do a series of these? Most definitely. [Rough Crafts | Images by Kin Lin] 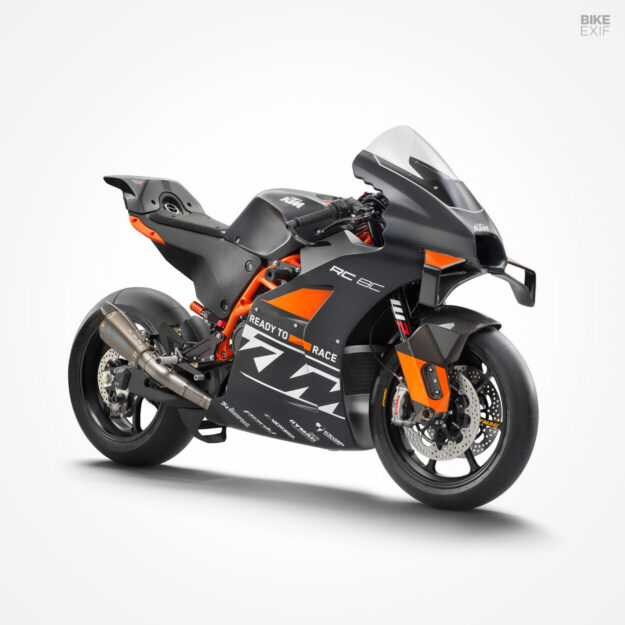 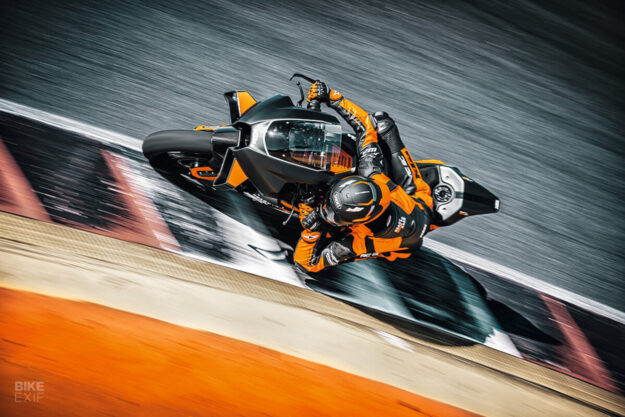 Building on the success of the previous model, the 2023 KTM RC 8C has been tweaked to deliver an “even sharper Ready to Race” experience. The LC8c parallel twin engine has been upgraded with various titanium parts, with the power boosted to 135 hp at 11,000 rpm. A new Akrapovič titanium exhaust system helps keep the dry weight down at 142 kilos [313 lbs].

The electronics suite also has a few upgrades. The throttle response and engine braking are adjustable, and to help you put the power down, there are traction, launch and anti-wheelie control options. 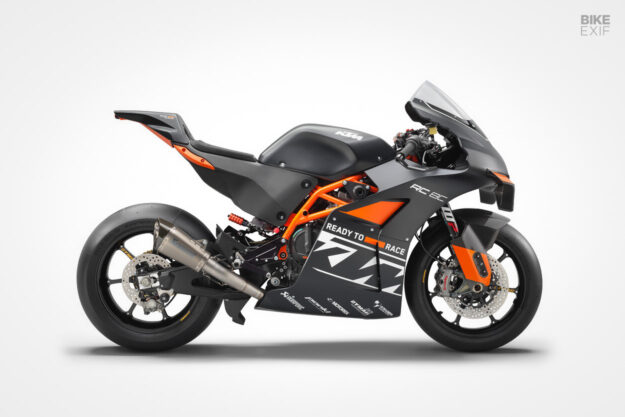 The suspension is from WP’s Pro Components range and the braking comes from Brembo. The transmission features a reversed shifting pattern, just like a MotoGP bike, while the wheels are wrapped in super sticky Pirelli Diablo racing tires.

The rims, chain, CNC fork clamps, handlebar switches and dashboard are all new. The carbon front fender and huge front fairing wings look like they’ve come straight off the RC16 MotoGP. Further cementing the RC 8C’s track-only vibe are the crash-damage-prone parts that can be easily swapped out in the pits. 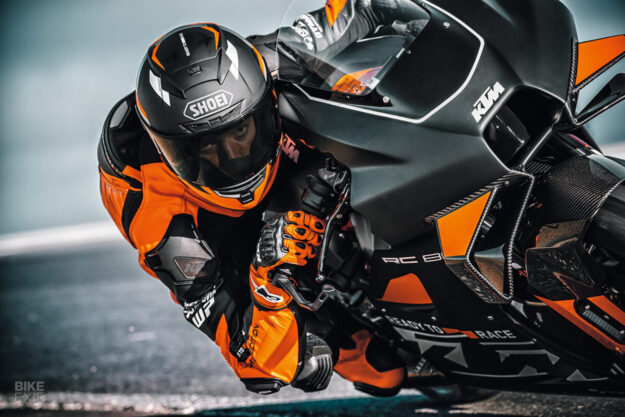 If all this sounds right up your alley, I have some bad news. All 200 2023 RC 8Cs sold out in a mind-blowing two minutes and 38 seconds. If you’d like to join the waiting list and try your luck, contact your nearest KTM dealer. [KTM RC 8C] 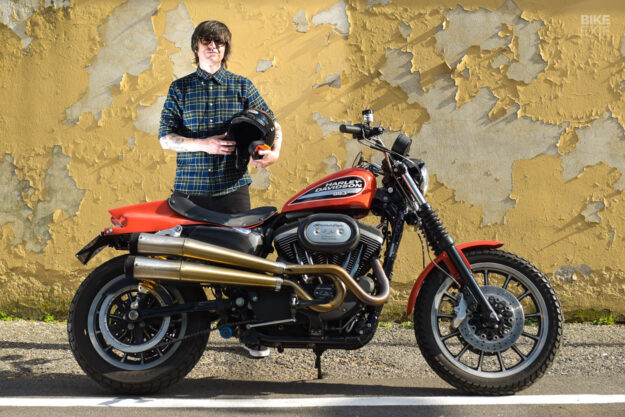 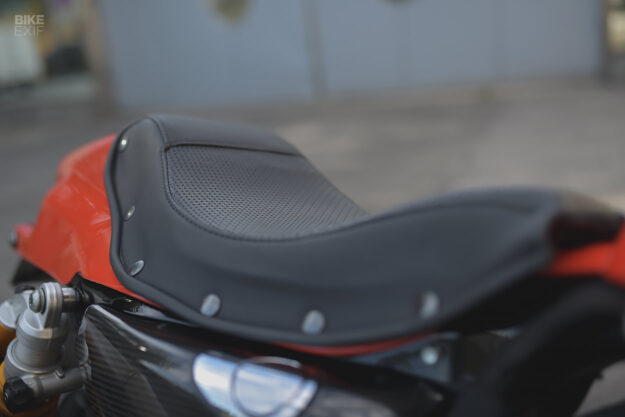 This is Paolo’s personal bike, based on a 2007 Sportster 883—and as you can see, he’s made some changes. “The bike is deliberately simple,” says Paolo. “I don’t like excess, and I wanted it to always recall the original model.”

Paolo has styled his Sportster like a road-going homage to Harley’s iconic XR750 flat tracker, and it sure looks the business. The Sportster 883’s stock peanut tank sits in front of a custom-made tail unit and seat. It’s a simple change, but it’s undeniably effective. 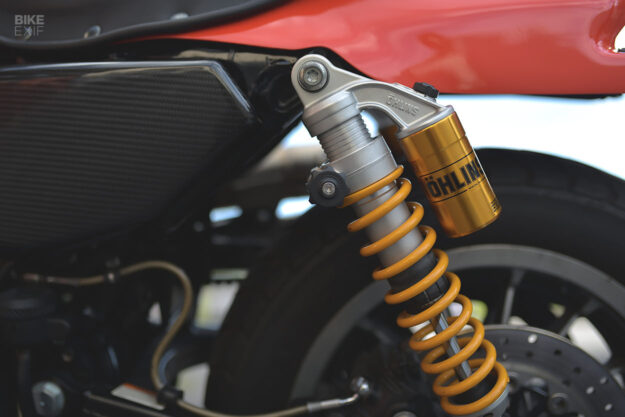 Up front are a pair of Brembo brakes, squeezing Discacciati discs through Goodridge braided brake lines. The suspension has been reworked, with Öhlins rear shocks and a kit from Misano in the front forks, complete with preload adjusters.

There’s a smattering of carbon fiber parts on the bike too, such as the headlight cover, side covers, air filter cover and chain guard. The engine has been bumped up to 1200 cc, courtesy of a Screaming Eagle kit. A stainless steel flat track exhaust was also fitted, terminating in a pair of Supertrapp mufflers. 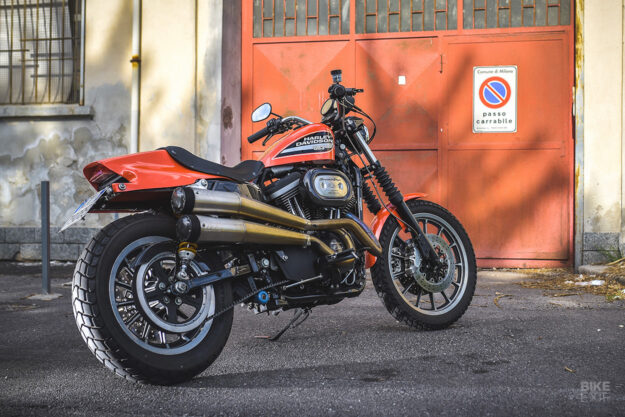 Wearing Pirelli MT60 tyres and that gorgeous orange paint, this Sportster looks like a blast to ride. We’ll ask it again: why didn’t Harley release this as a factory Sportster back in the day? [Duecilindri] 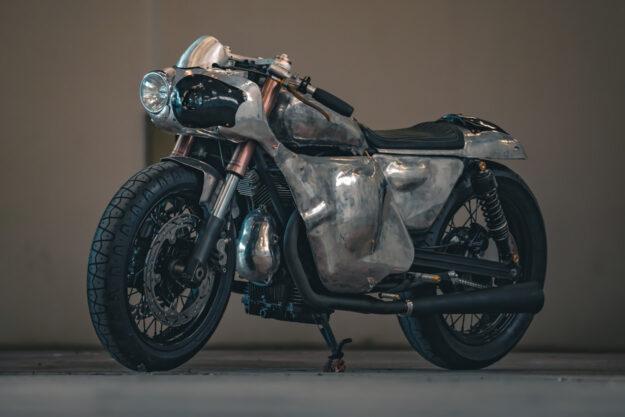 Moto Guzzi V65 by 7089 Garage Antonio from 7089 Garage has an affinity for raw metal. Heavily influenced by Japanese bike builders like Shinya Kimura, Antonio has always admired their mastery of metal shaping.

Approached by a customer who wanted a “rideable show bike,” Antonio chose a 1981 Moto Guzzi V65 as the base. The V65 is basically a smaller version of the venerable Moto Guzzi Le Mans. These small block Moto Guzzis are plentiful, make a great noise and handle like a dream. 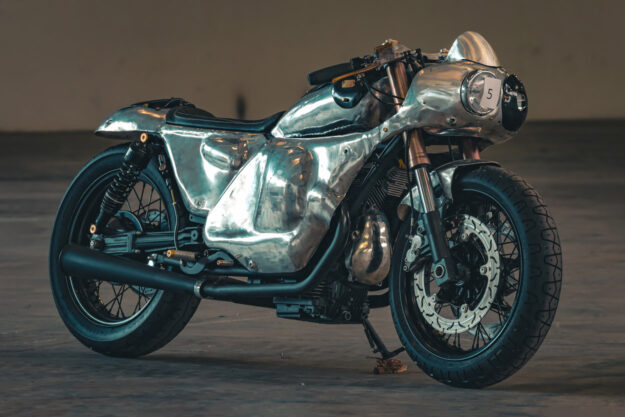 This also makes them perfect for custom builds. To make his Guzzi stand out, Antonio crafted all the bodywork by hand from aluminum. Using traditional metal shaping tools, he created the front fender, fairing, tank, tail and side covers. He also made the alternator cover, and added brass highlights to the foot pegs and rear shock bolts. 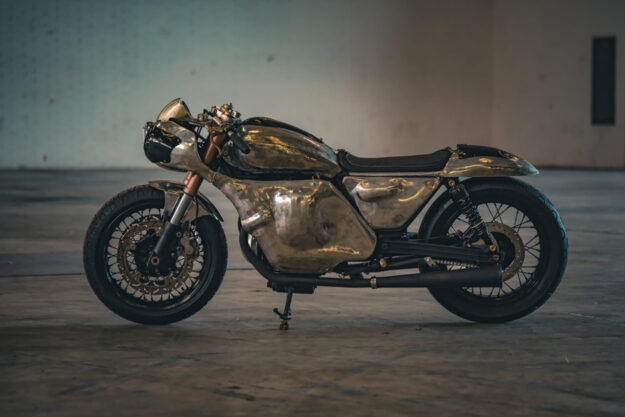 The V65 front end is spindly, to put it mildly, so Antonio swapped it out for a set of modern upside-down forks. While the forks make for a smoother ride, a twin disc front end provides a massive boost in braking power.

Covering most of the bike, the flowing bodywork has an almost organic form to it. Which is exactly why Antonio opted not to paint any of it. We’re sure the new owner would be just as happy looking at it as they would riding it. [Via] 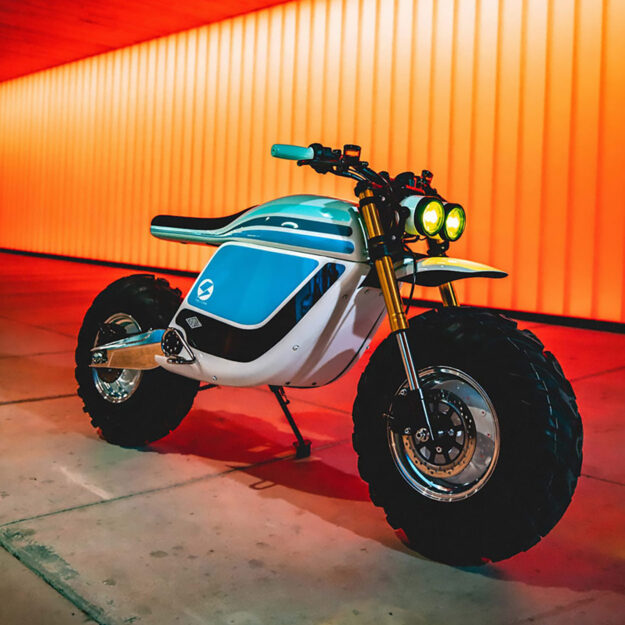 Volcon Grunt by Revival Cycles When the Austin-based EV manufacturer, Volcon, was looking for a shop to collaborate on a custom build, they looked in their own backyard. After a brief trip to the other side of town, they delivered a Volcon Grunt to the crew at Revival Cycles with a relatively simple brief.

Volcon requested that the big tires and most of the frame stay intact, but the rest was up to Revival—as long as they built something completely unique. Fortunately for Volcon, unique is something that Revival does very well. 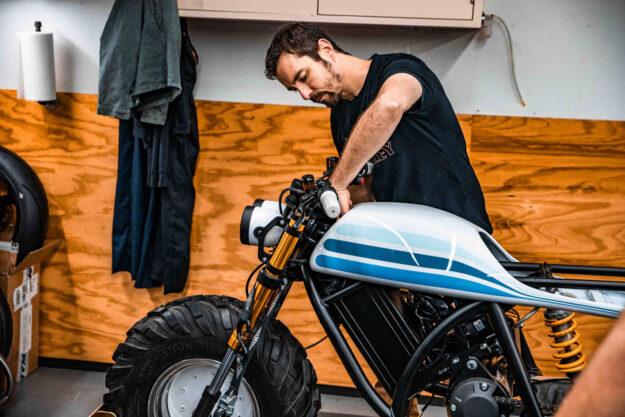 Leaving the chunky tires where they were, the bike was stripped down to get a good idea of what the Revival crew had to work with. They then teamed up with designer Ed Boyd to create a number of 3D models in CAD. After choosing a direction, it was all systems go.

They settled on a design that combines sleek monocoque-style bodywork with a cantilevered tail section. The bodywork is all fiberglass, built in collaboration with Calton Cases. Calton is traditionally known for their custom guitar cases, but they had all the right tools to help Revival knock out the Grunt’s new bodywork. 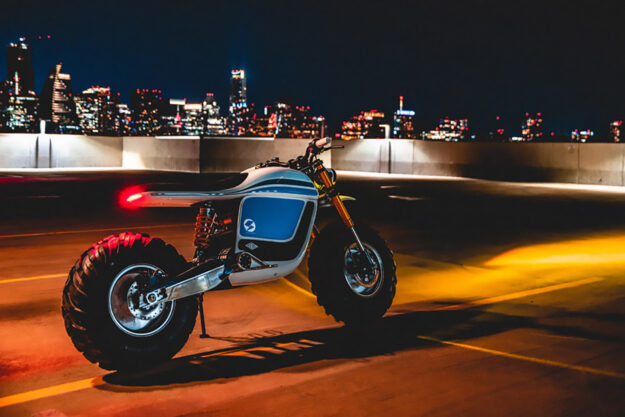 With that sorted, the Revival team chopped off the Volcon subframe and welded their own in place. Narrower and stronger, it supports the custom seat and tail with ease. The swingarm was inverted, with the ride smoothed out by an Öhlins TTX36 shock absorber mounted on custom brackets.

Other changes include custom stainless steel foot pegs mounted on CNC-machined brackets, and twin LED headlights. Painted in bright, flashy colors, the bike looks exceptionally fun to look at and ride. If this is what the future of electric motorcycles looks like, sign us up. [More]