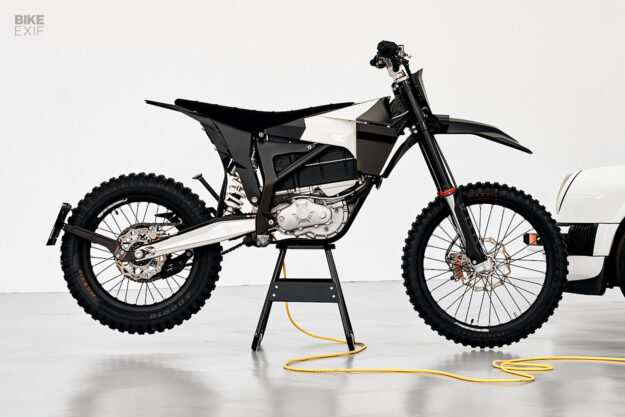 Modern dirt bikes are the epitome of form following function. Narrow fuel tanks are easier to grip with your knees, flat seats enable you to shift your weight around, and plastic bodywork can be replaced after a crash. It’s why they’re so formulaic in their design.

Vagabund Moto are here to inject some style into the genre. Founded by Paul Brauchart and Philipp Rabl, the Austrian outfit is part of a growing breed of custom shops that blur the lines between motorcycles, design and fashion. Their builds are modern and edgy, and are built using the latest manufacturing techniques. 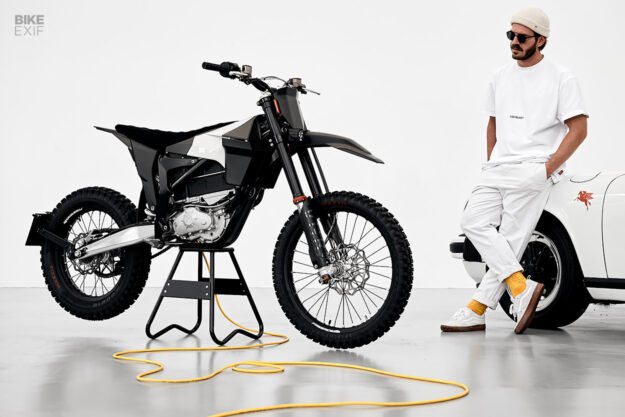 If this svelte KTM leaves you with a sense of déjà vu, it’s because it closely resembles another KTM that Vagabund built earlier this year. But there’s one major difference—this one’s based on the electric-powered KTM Freeride E-XC.

“We started this project with the general idea of creating a super agile urban commuter,” says Paul, “while still keeping the option to go for some after-work fun in the woods. We were really happy with the outcome of our previous KTM ‘Safari 350’ build, and the general quality of KTM. Plus it’s an Austrian brand, and we like the idea of reinterpreting a ‘Ready to Race’ bike to our idea of using it.” 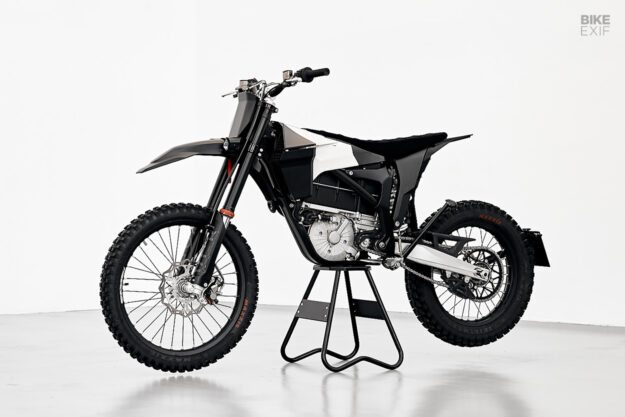 Both KTMs share a modular aesthetic and monochromatic color scheme, but this was no copy-and-paste job. The two bikes are vastly different, so there wasn’t a single part that could be replicated as-is. So the team started by stripping the Freeride E-XC down to its bare bones, and 3D-scanning the whole bike.

“We focused on the most important parts, to reach a minimalist Vagabund look without totally killing the budget,” says Paul. “It was a challenge to keep the original frame line, while still trying to incorporate our own idea of design.” 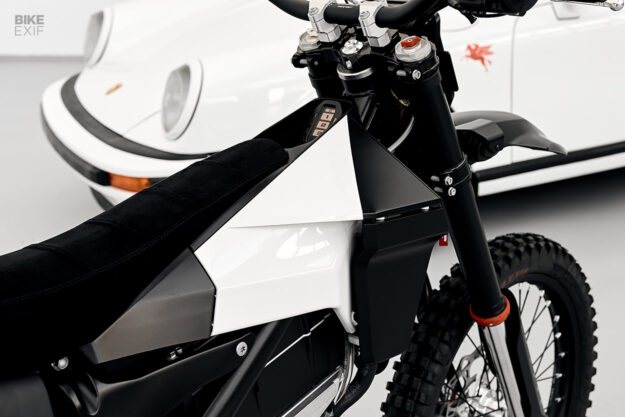 Once new bodywork was designed, Vagabund 3D printed the various parts. Everything’s been made from Polymid 12, a hard nylon polymer that’s abrasive resistant, and bolts straight on.

The set includes new ‘tank’ panels, and a new tail section that includes an integrated LED taillight. Every part complements the next, with superb attention to detail. Peak around the front end, and you’ll even spot honeycombed panels tucked into the front ‘wings.’ 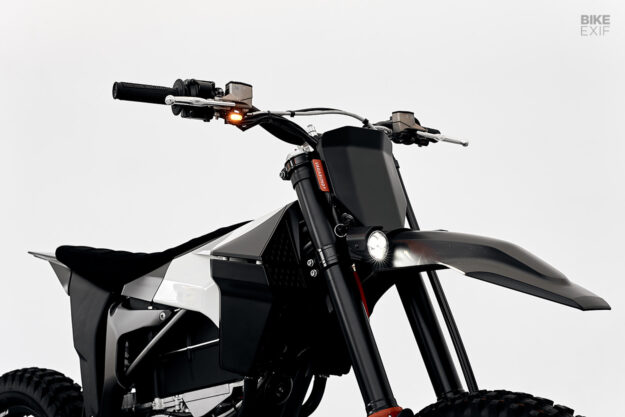 A new nacelle sits up front, but it doesn’t house a traditional headlight. Instead, Vagabund designed a bracket to hold a pair of Highsider LED headlights lower down. A subtle Vagabund ‘label’ sits on the side, with the ignition integrated lower down.

The front fender is one of the few off-the-shelf parts on this build; it comes from a Husqvarna TC85, and was modified to fit. 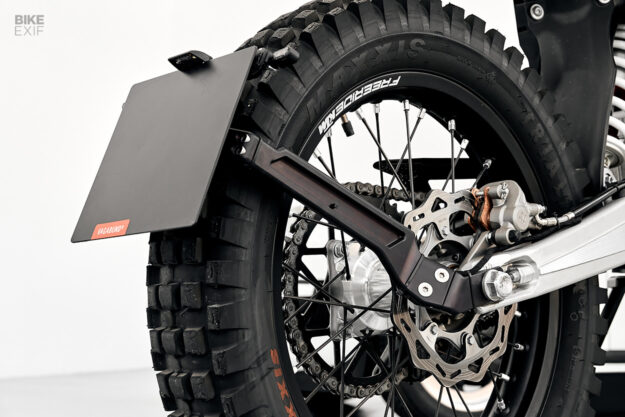 During the redesign, Vagabund also took care to keep the KTM street legal. A pair of Highsider turn signals sit on the underside of the handlebars, held in CNC-machined aluminum housings. Out back is a custom-made aluminum license plate bracket, also kitted with Highsider LEDs.

A custom seat adds a finishing touch, upholstered in a luxurious Alcantara. It sits on the KTM’s OEM seat hinge, so that you can still access the battery without any hassles. 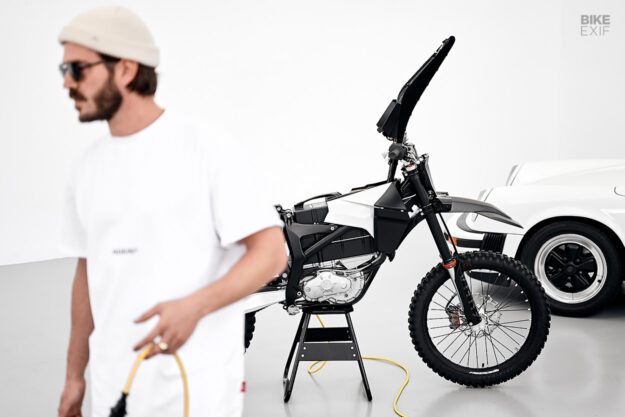 As for the bike’s bones, Vagabund decided to leave well enough alone. The chromoly main frame, forged aluminum bolt-on sections, and a few other parts, were powder-coated black, but nothing was cut or welded. Plus the original wheels, brakes and WP suspension components are still in play.

That means that the 42 Nm, 240-ish pound Freeride E-XC still has oodles of suspension travel and ground clearance. So it should still be a total blast to ride, with the added bonus of looking better than anything else out on the trails. 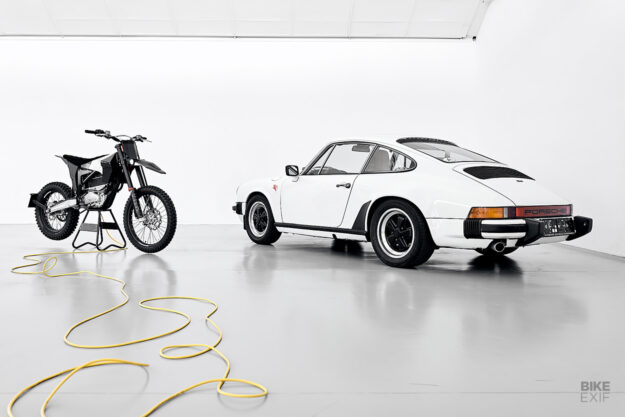 It also means that the work that Vagabund have done here can be replicated. So they’re opening their order books for custom Freeride E-XCs in this style.

Who else is busy imagining this in their garage right now? 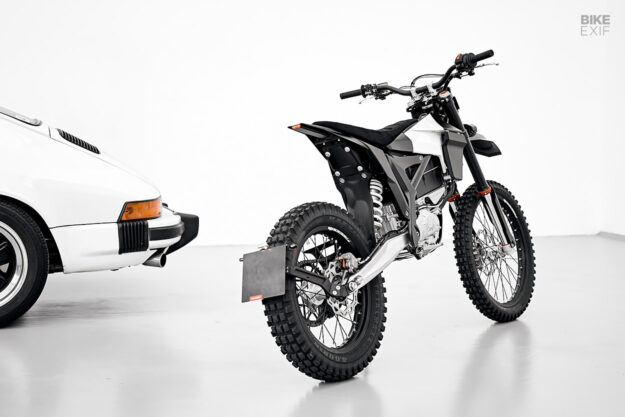