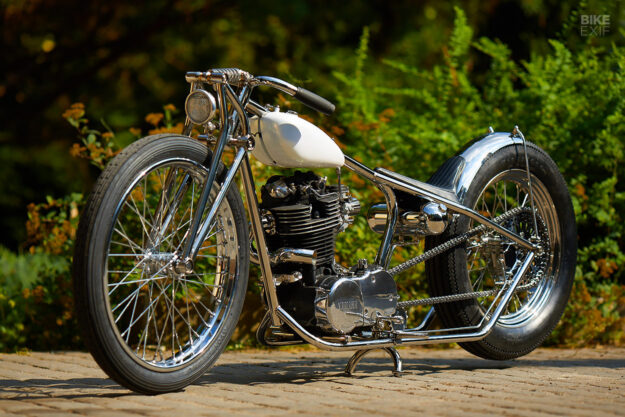 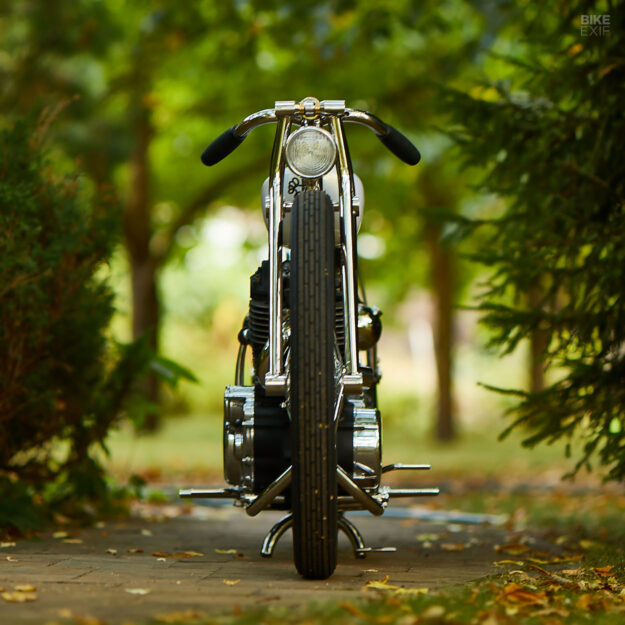 Copper Chopper’s been going for about six years, and originally started as a sideline gig with a mantra of “bought, built, ridden and then sold.” But the guys took the business full time this year, and, as a result, have started taking on commissioned work. This SR400 is their first client build, and it’s one hell of an entry into the world of pro custom work.

You can count the off-the-shelf parts on this Yamaha on one hand. Alexey and Igor started with a stock SR400 donor, a Lowbrow Customs front wheel, a rear sprocket-brake setup and a headlight from FNA Custom Cycle. The rest is their own handiwork. 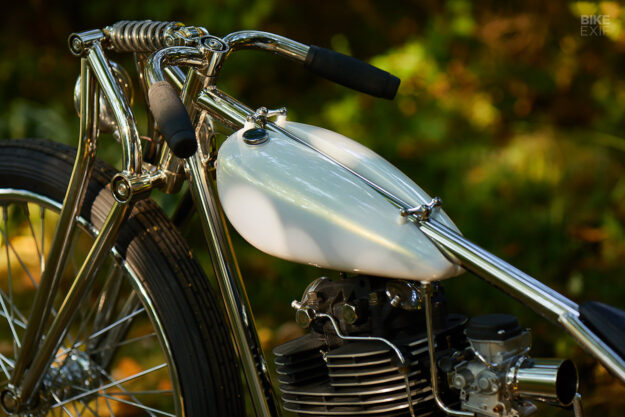 The SR400’s engine has been transplanted into a rigid stainless steel frame, with a custom girder-like front end. The entire chassis is remarkably slender—which is exactly what the guys were aiming for. “It had to be as slim as possible,” says Alexey, “as slim as Maxwell Hazan’s masterpieces.”

A lack of available parts to execute Alexey’s vision for the forks meant that everything, from the minimalistic yokes and handlebars, to the actual shock, had to be fabricated. “We don’t have a milling machine,” he says, “so we had to invent ways to fix stuff to the lathe and mill it there. That happened throughout the whole project.” 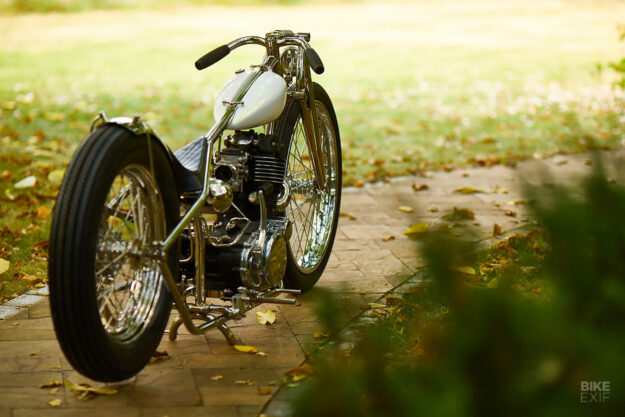 The rear wheel is custom too. Starting with a stainless steel billet, Copper Chopper formed the basis of the hub on the lathe, then welded on a set of laser-cut flanges and refined the part. It was designed to accommodate the sprocket-brake that they had on hand, and add a custom-made chain tensioner.

The Yamaha sits on a custom center stand when parked, and rolls on vintage Avon and Firestone tires, front and rear. 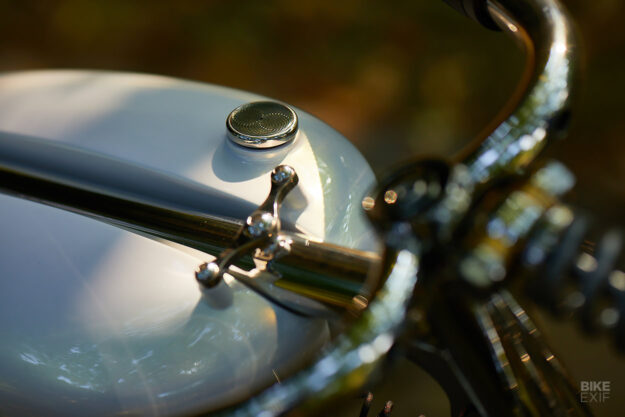 Up top is a tasteful twin tank arrangement—again, fabricated from scratch. The left side holds fuel, while the right side is reserved for electronic components. To keep things super sano, Alexey and Igor routed most of the wires inside the frame itself.

Equal consideration was given to the cockpit, where the duo built an internal throttle and clutch. (Keen eyes will notice that neither of those are currently hooked up—the cables were added after these photos were taken.) 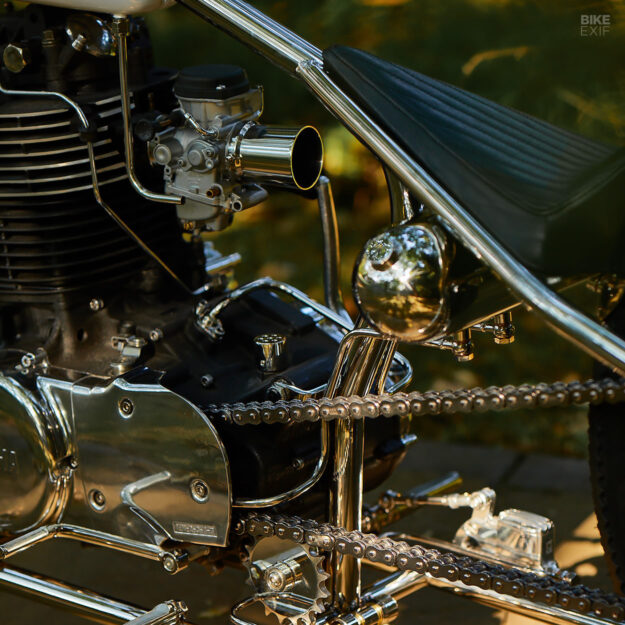 Sitting behind the tank is a skinny chopper-style seat. Copper Chopper shaped the seat pan, and the rear fender, in-house, but had the leatherwork done by a pro.

A handmade stainless steel oil tank is tucked in beneath the seat. With so much polished metal already on the bike, Alexey and Igor didn’t want to resort to rubber for their plumbing. So all of the fuel and oil lines were made by hand too, again using stainless steel. 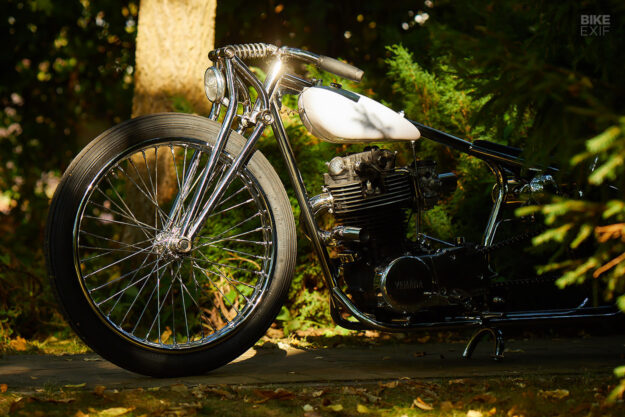 Wondering where the exhaust, foot controls and every last nut and bolt came from? You guessed it: they were also made from scratch.

It’s rare to find a custom motorcycle that was designed digitally, then executed without a single 3D-printed part… but here we are. If Copper Chopper keep this up, they should have no trouble filling their order book. 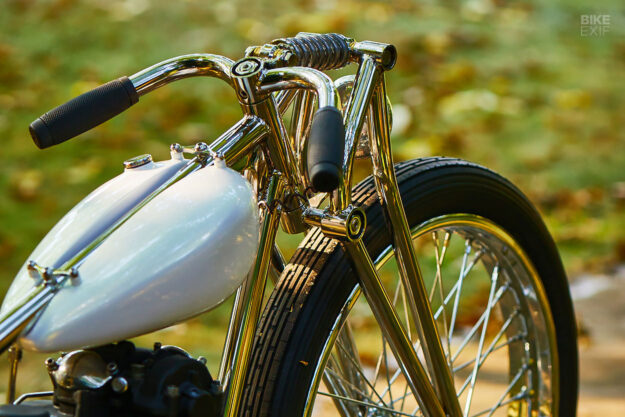