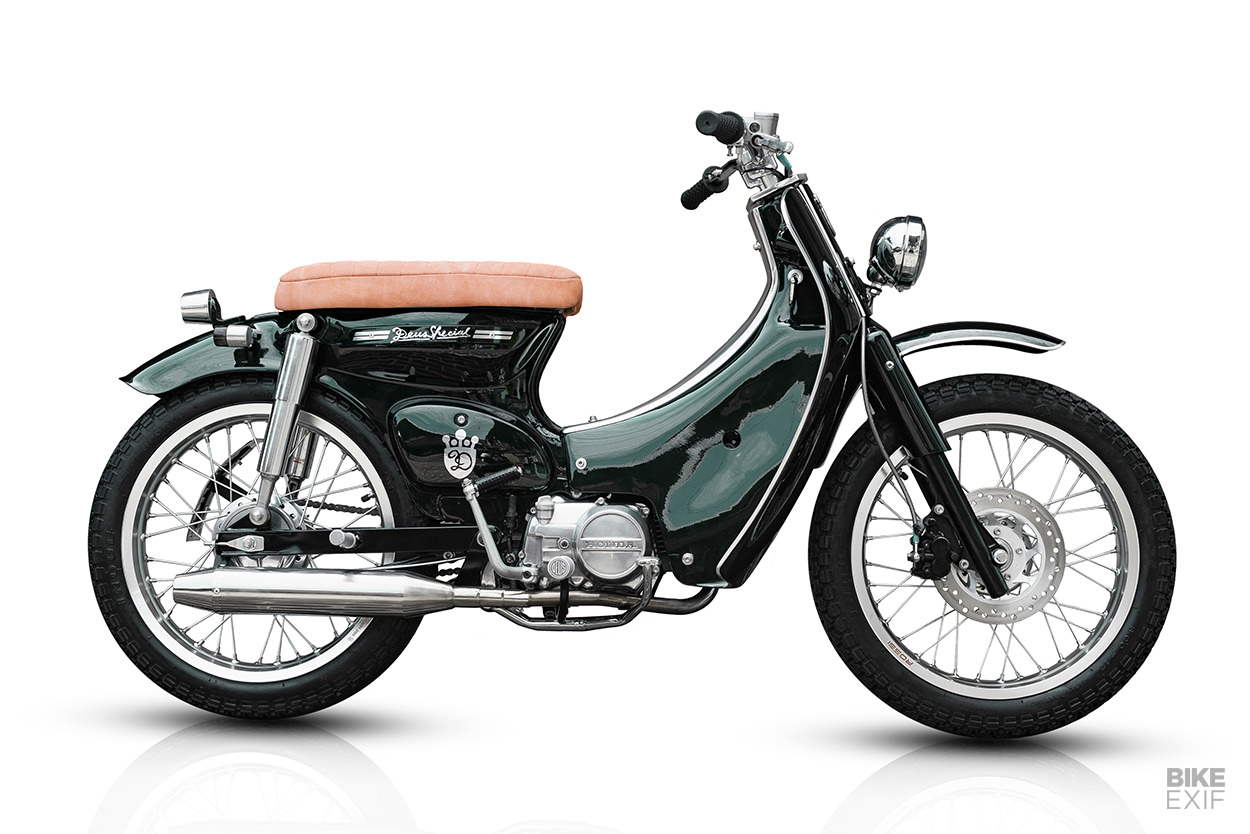 We can’t get enough of custom Cubs around these parts: we’ve featured more than 20 of the step-throughs over the years. But the Cub scene is now saddled with the same problem that builders of CB café racers and BMW airheads face—they’re all starting to look the same.

So how do you come up with something different, without sacrificing practicality or heading into cartoon territory? That was the conundrum faced by Deus’ Bali outpost. But they’ve surmounted it with an elegant C100 that harks back to the style of classic Italian mopeds. 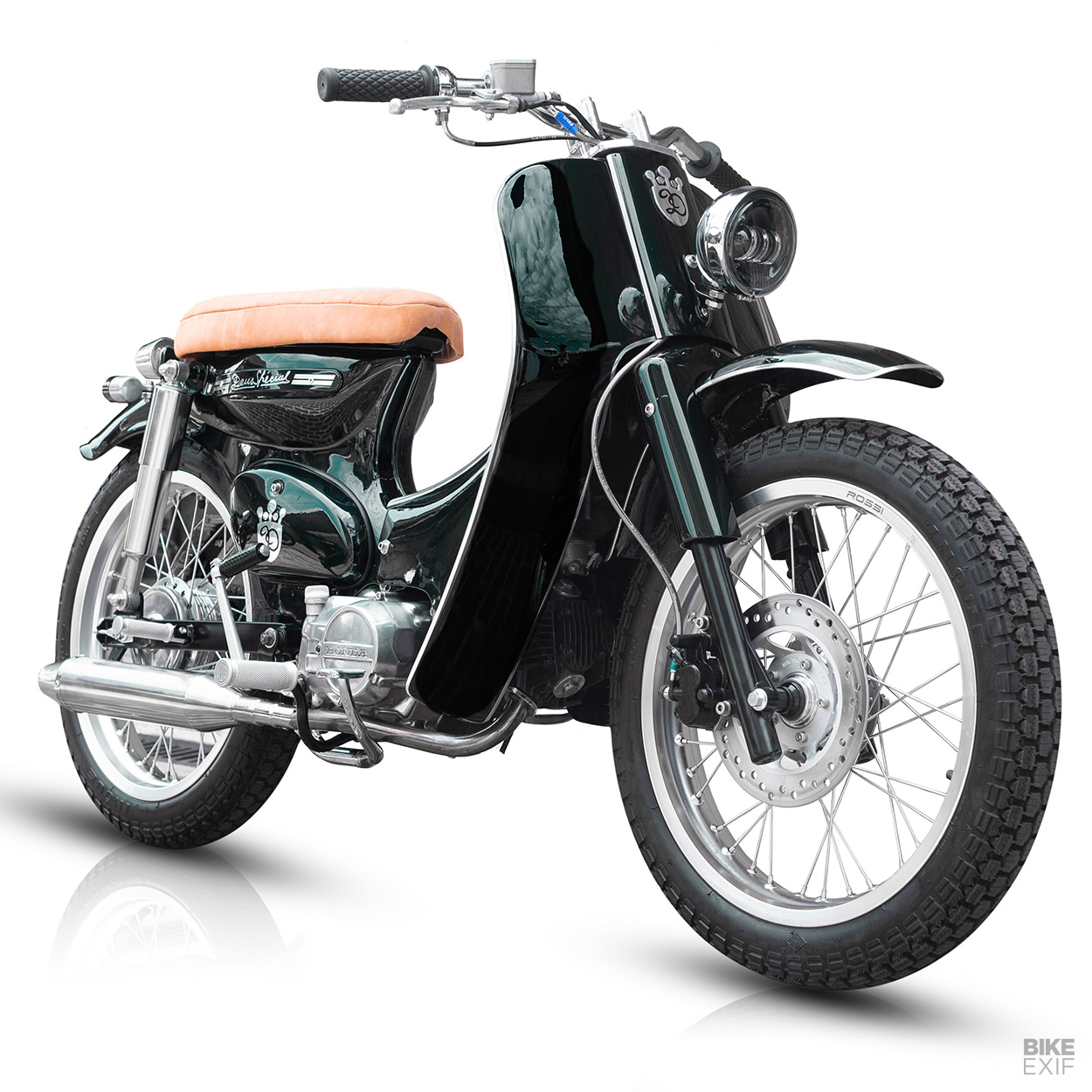 This C100 was built for a local client called Nicco. “We’ve done quite a few Honda Cub conversions over the years,” says Deus manager Anthony McInerheney. “But when Nicco approached us to do a complete build on a 1979 C100, we didn’t want to go back over old ground.”

“The streets of Bali are now littered with pretty people on Honda C70s heading from their yoga classes to their co-working spaces!” 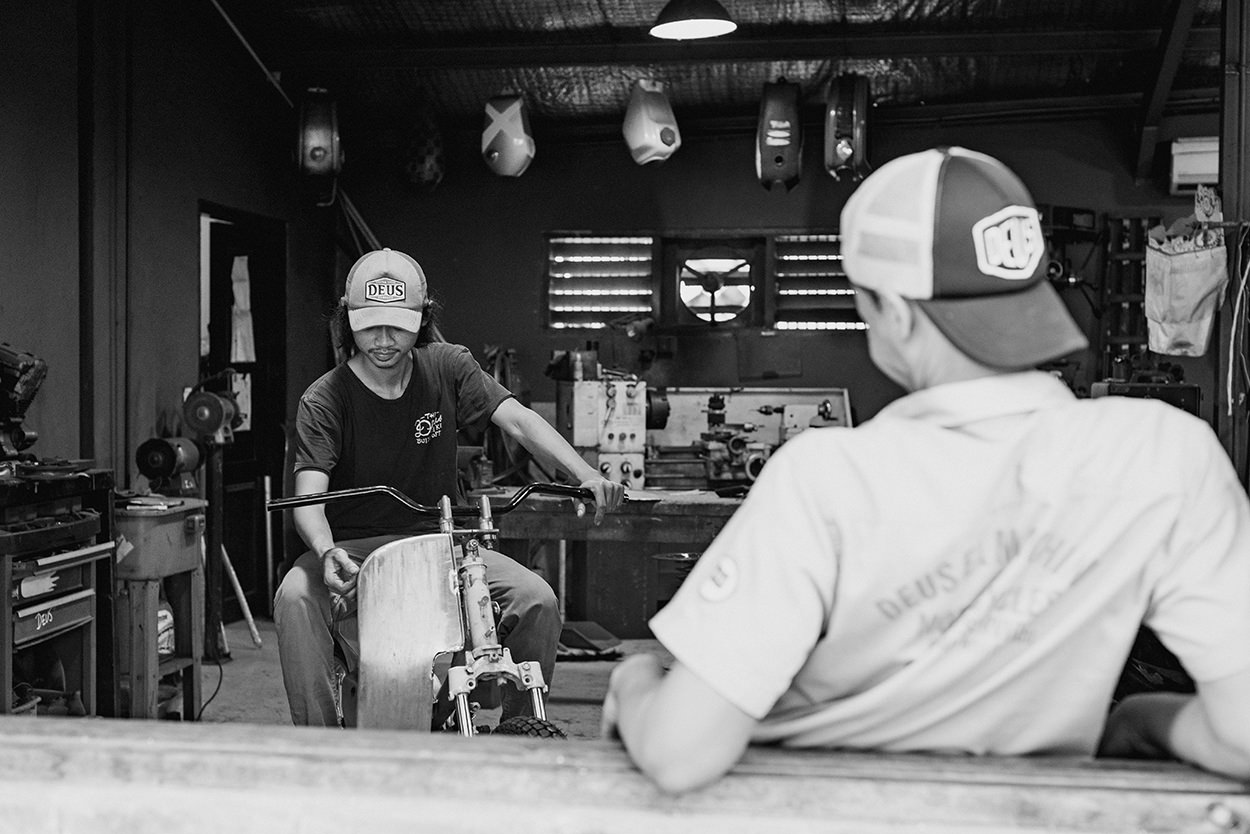 “Perhaps the best thing we can say about the donor bike is that it’s one of the rarer C100s, and it had a full set of papers. Making it something of a unicorn find these days,” says Anthony.

It’s tempting to think all Cubs are the same, but there are differences. The concept was developed by a team led by Soichiro Honda himself, using a monocoque chassis stamped out of steel. Performance was always remarkably good, thanks to Honda’s focus on well-engineered and high-revving engines. 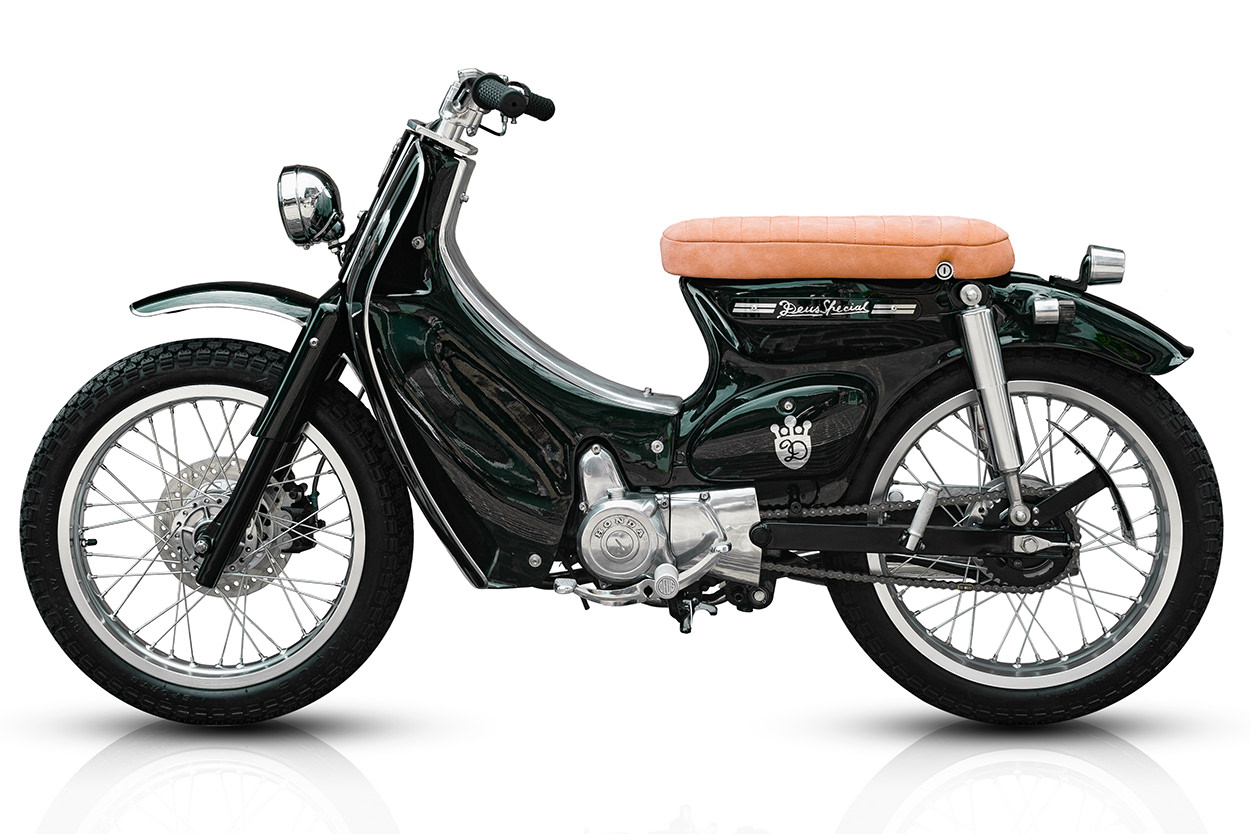 The Deus crew decided on a ground-up rebuild. “In the past, we’ve put our Cubs on a hefty visual diet,” says Anthony. “The leg shield and other optically ‘bulky’ items are ditched, in favor of showing off the svelte lines of the underlying frame. But everyone’s now done that, so we went in the opposite direction this time.” 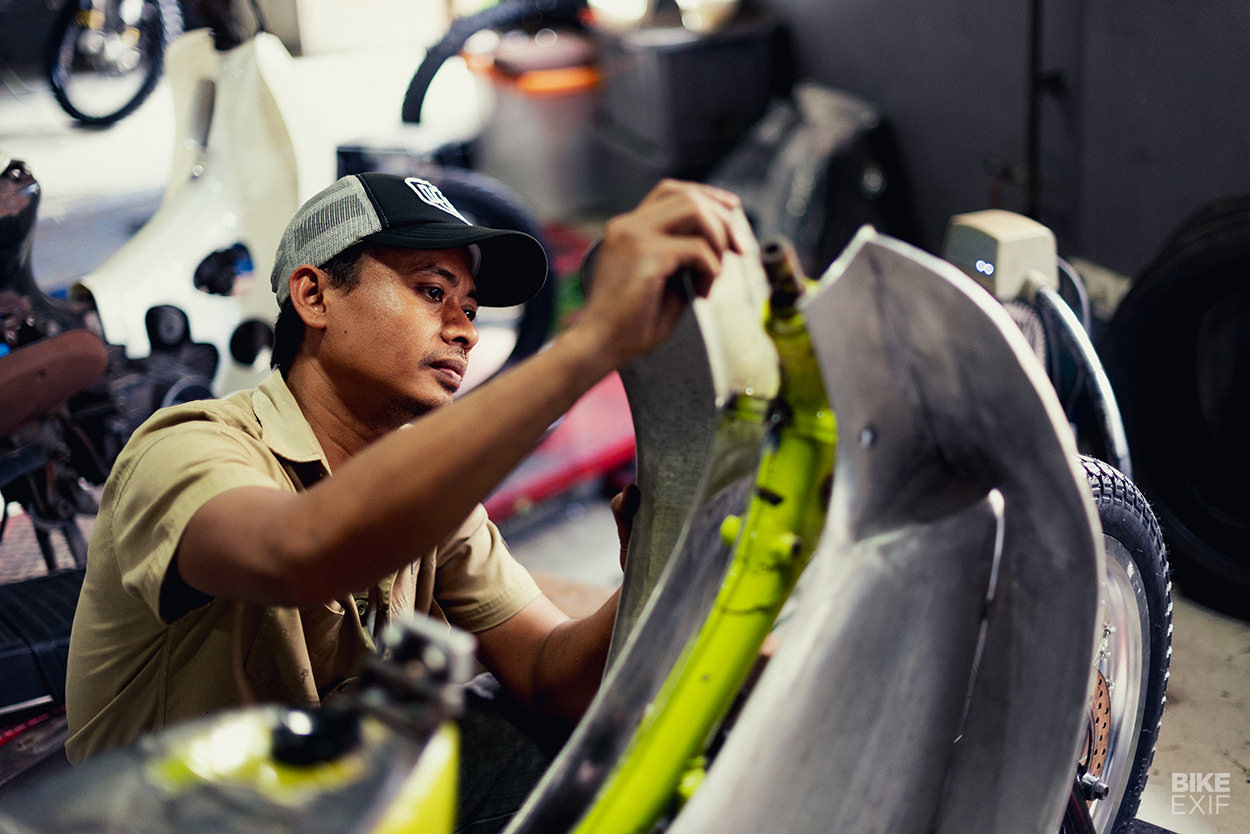 The leg shields on this C100 are inspired by those of Vespas and Lambrettas from the 70s to 90s, and are hand-crafted from plate aluminum. After several months—and several iterations that weren’t quite right—the workshop team of Dylan, Arwin and Koko finally hit upon a shape that worked.

It’s a silhouette reminiscent of Italian heritage rather than the Honda’s original Asian birthright. 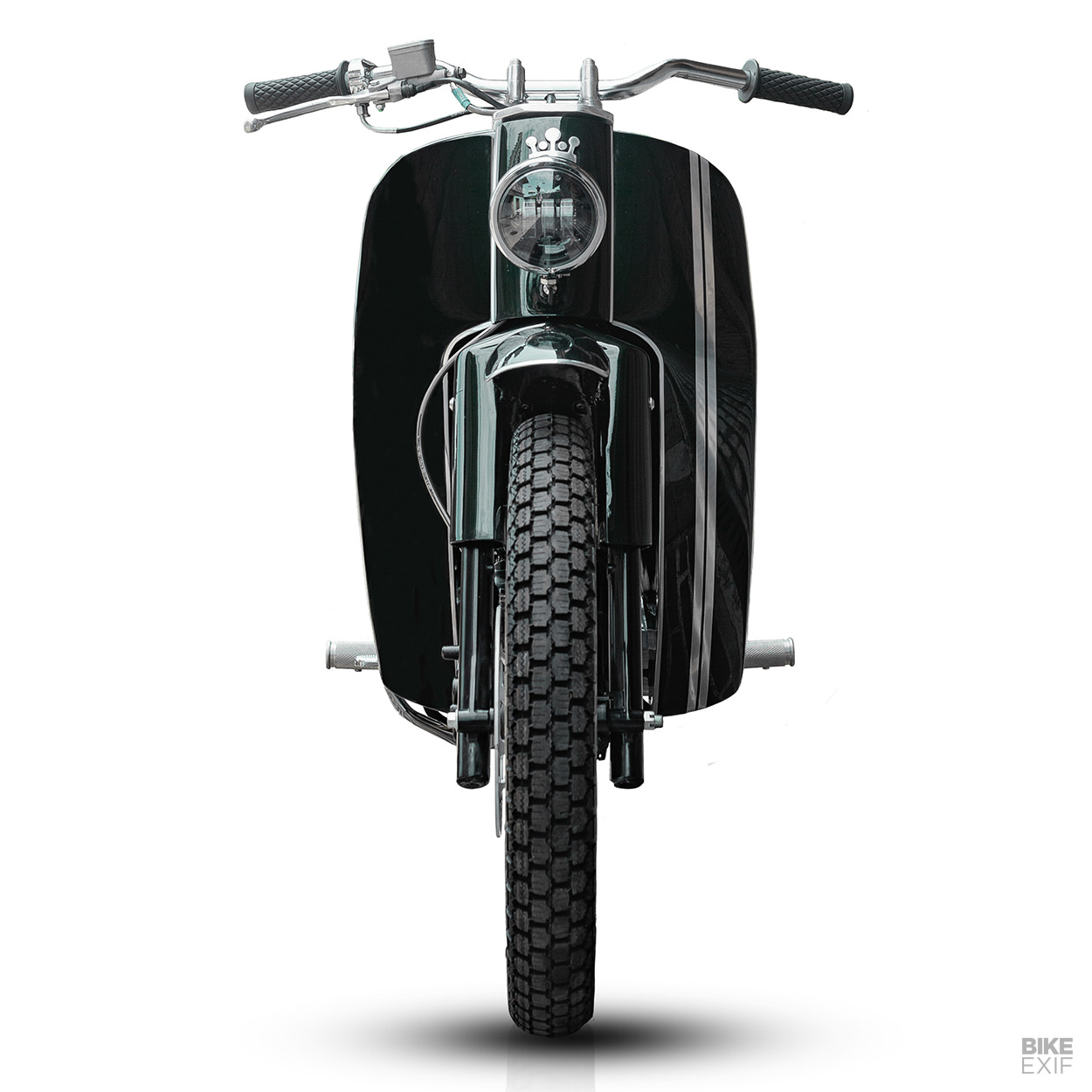 This beautiful bit of metal folding sets the bar high, but Deus followed through with a slew of other clever details. A 5.5-inch Daymaker LED headlight is slotted into a stainless steel bucket, and Arwin coaxed out a new set of side panels using more aluminum plate. Further down are turned and knurled billet aluminum foot pegs, with little acid-etched logos added to their ends.

Then it was time to delve further into the logo archive, and fabricate handmade metal Deus badges for the front and sides. The long original seat was reworked via a little metal rearranging and a new seat pan, with the cushion upholstered in brown suede. 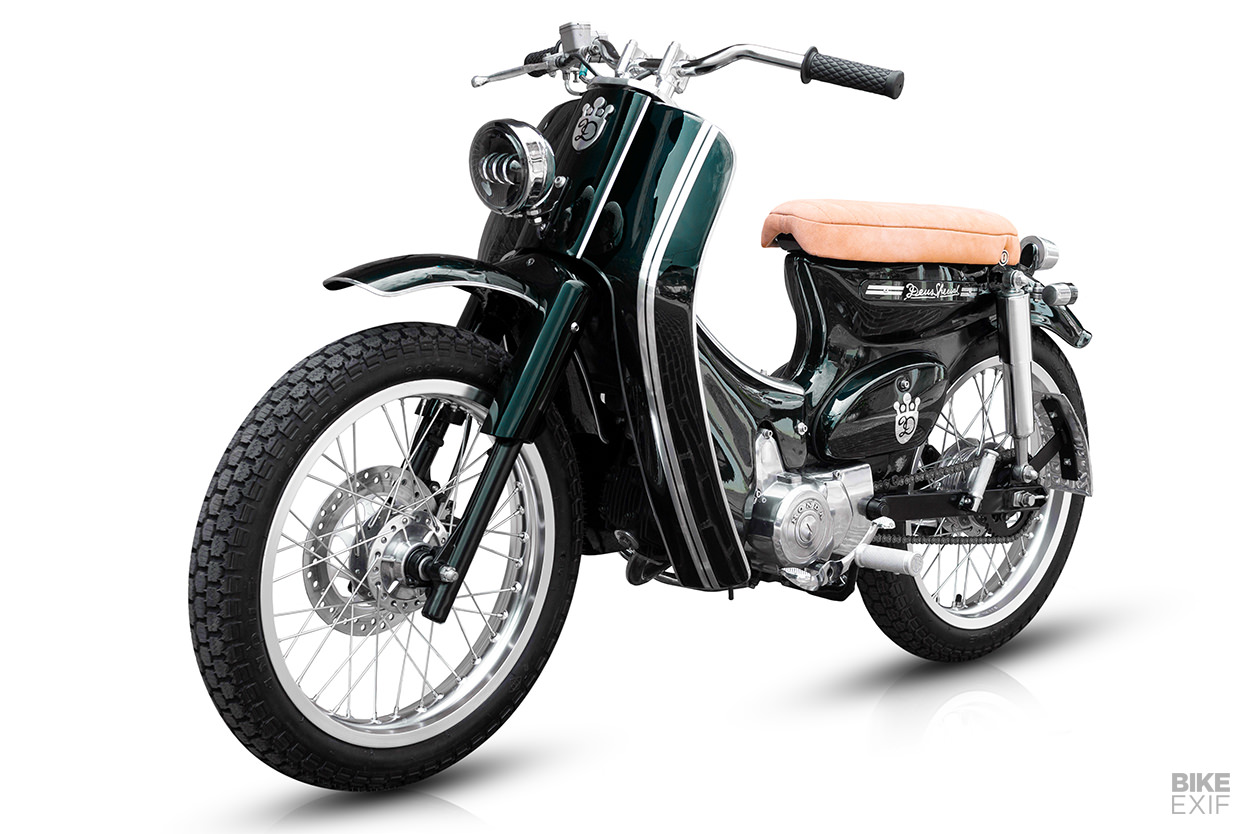 Engine wise, Deus had to start from scratch. The tiny four-stroke was stripped down and all the innards were refreshed—including bearings, rockers, and gaskets. New gears and a new clutch were fitted, and for added good measure, Deus rebored the cylinder to take an oversized piston.

A new slide carb keeps the motor well fed, and the workshop wizards fabricated up a classy stainless peashooter to handle the exhaust gases. 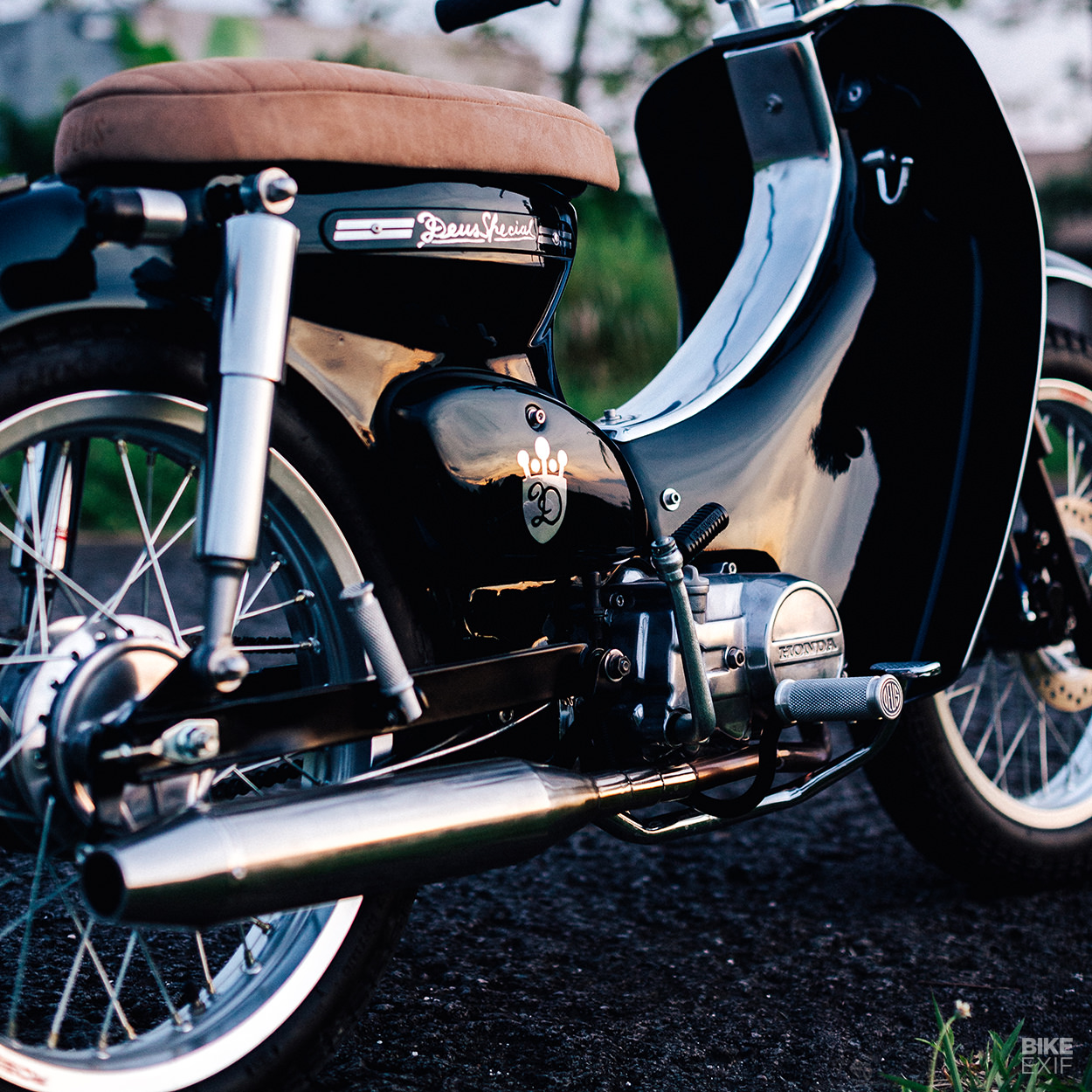 Stainless steel spoked rims from the Japanese brand TK Racing are shod with SP1 tires from IRC, to boost the classic vibe even further.

The C100 is now perkier than it’s ever been, so Deus upgraded the rear shocks with a new pair from a local specialist. They also replaced the rear brakes with new-old-stock items, and added a disc setup to the front—with a telltale reservoir next to the Japanese Posh switchgear. 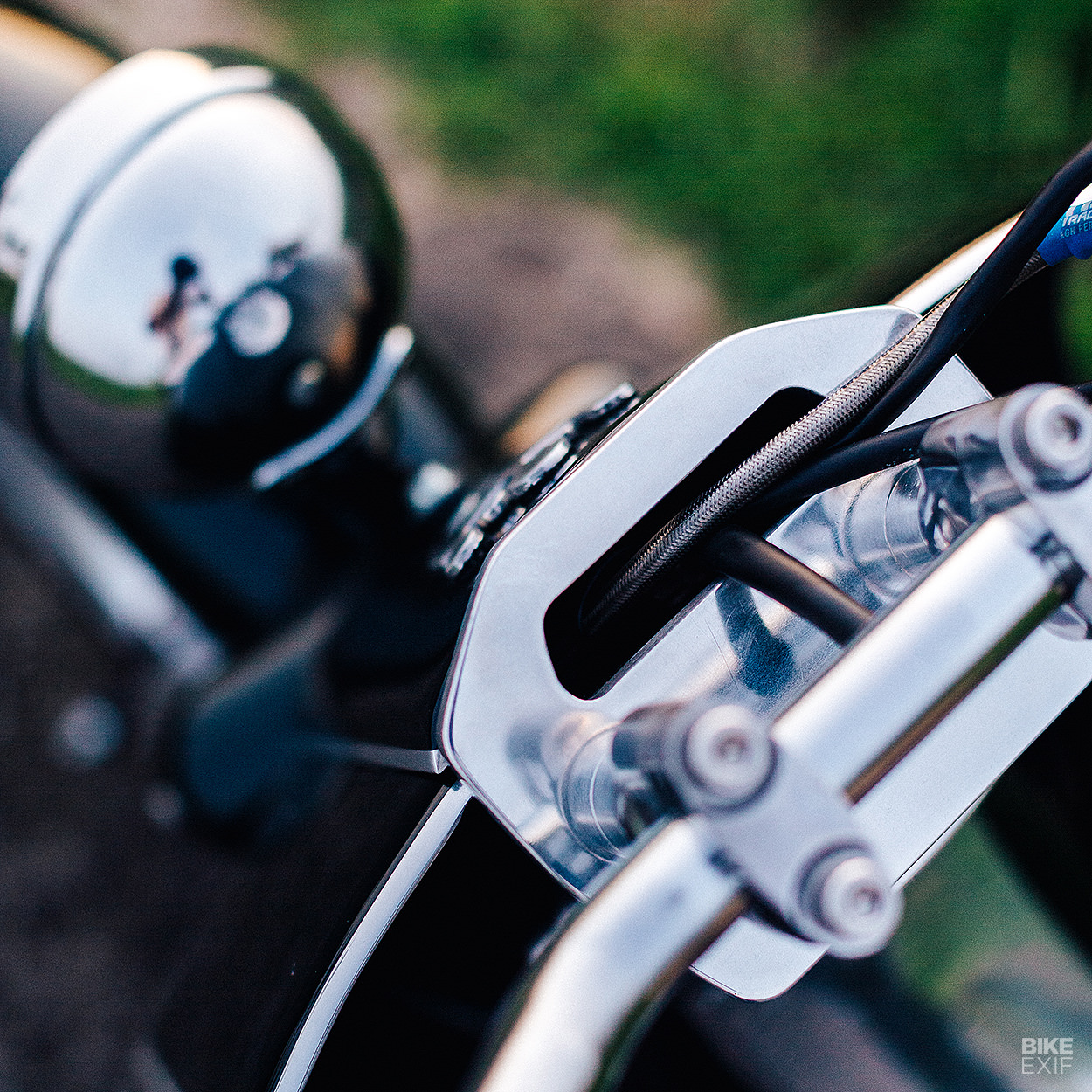 The new stainless steel bars have been lifted from a Yamaha RXZ-135, a two-stroke commuter popular in Indonesia. And although it’s not exactly a triple tree, the plate that marries the risers to the forks is another inspired piece of fabrication.

The paint gave Anthony and the crew a few grey hairs. “Inspired by British racing greens, we agonized on how dark we could go before black came to town!” A clearcoat over the top and a small dollop of pearlescent keeps everything nice and shiny. 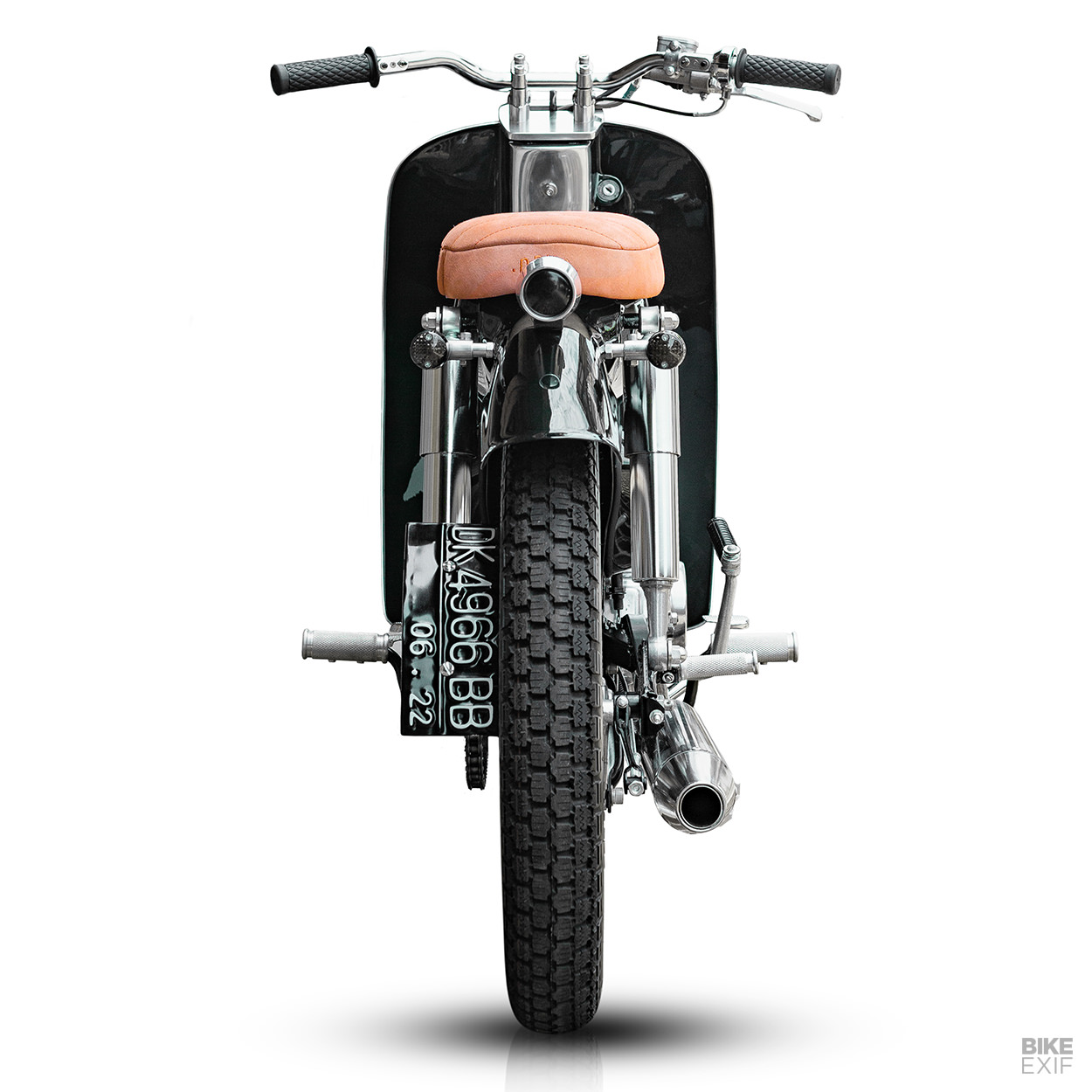 Deus have capped off their C100 with a brake light crafted from lathe-turned billet alloy, plus tiny LED indicators from Posh. As with all the other details on this build, the approach is classy rather than flashy.

Top marks to the Bali crew for avoiding the clichés—and building a custom commuter that would work brilliantly in any modern city, as well as the glorious beach roads around Canggu. 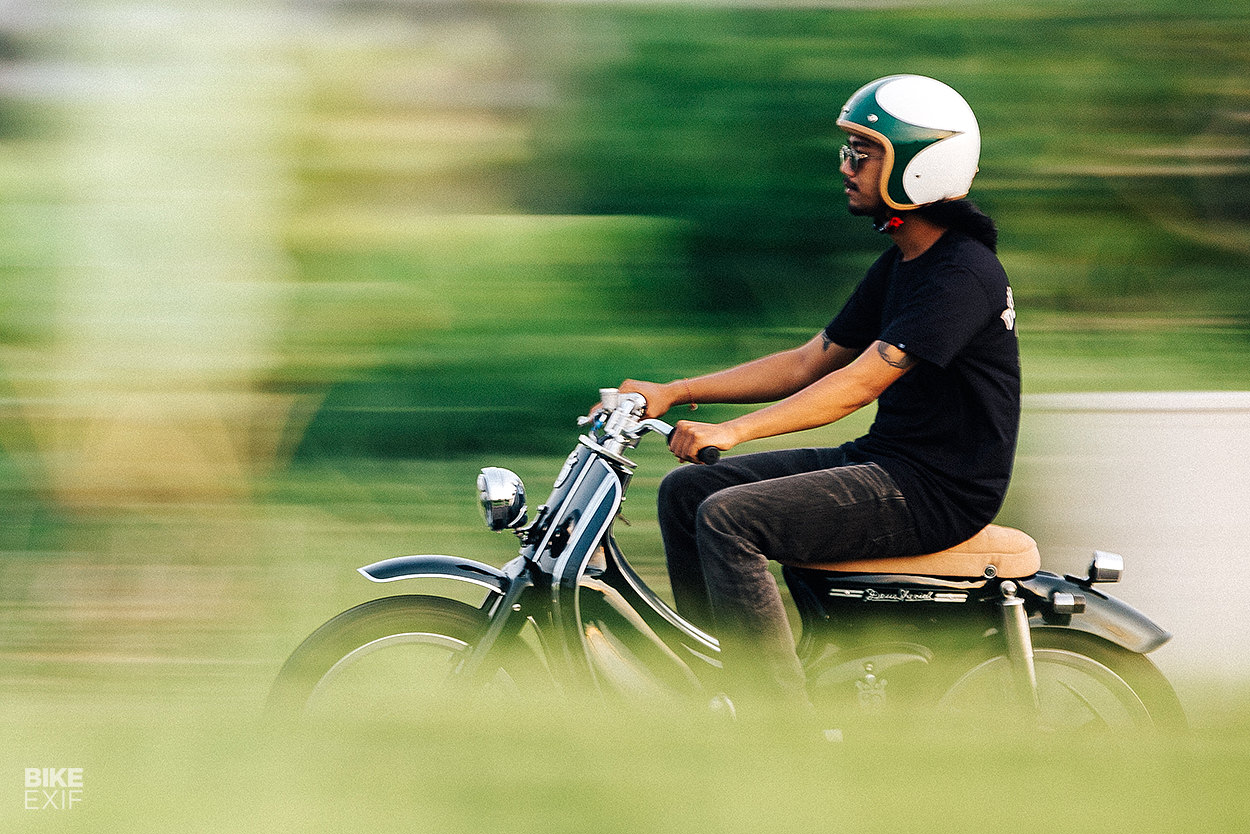