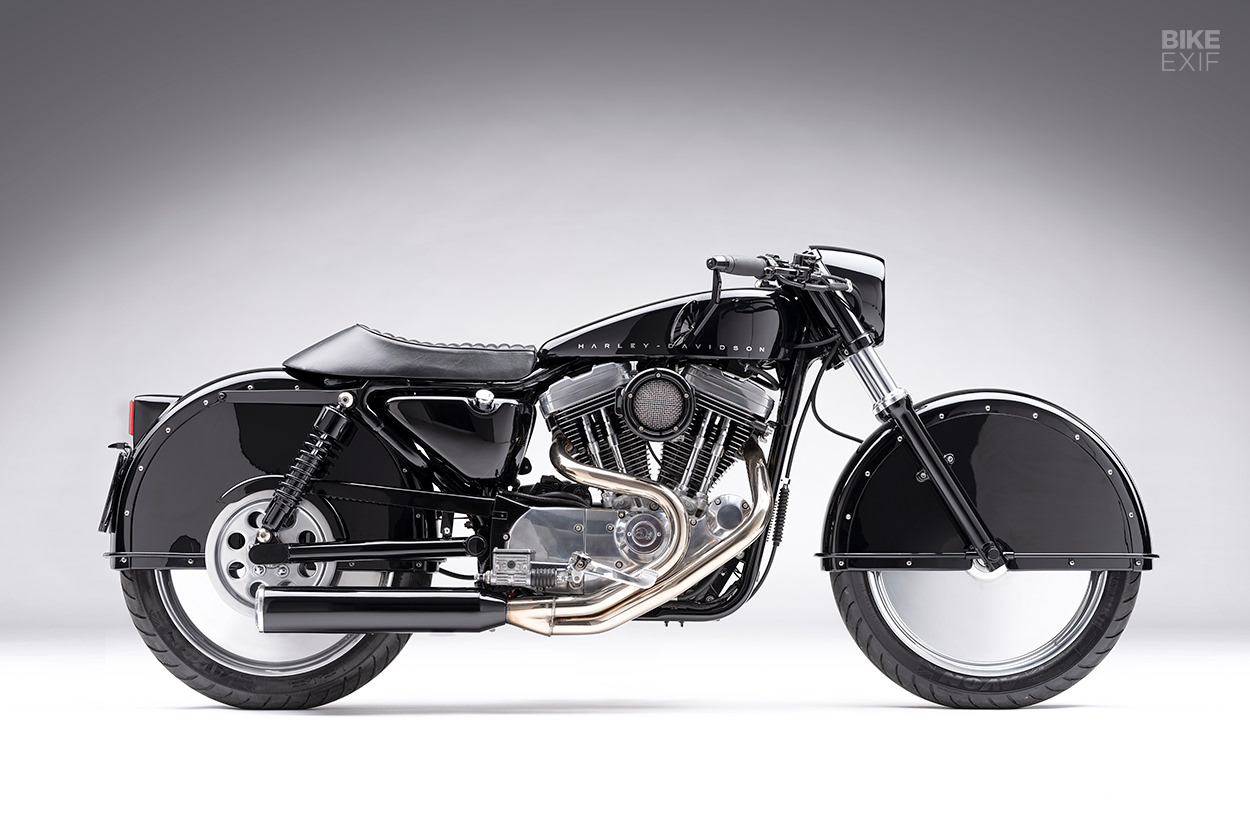 There are a million ways to customize a Harley-Davidson Sportster, so it’s tempting to look to those that have gone before for inspiration. But French designer Guillaume Radomski used an entirely different approach for this art deco Sportster. His cues came from classic aerodynamic vehicle design concepts—and the results are striking.

With a mood board made up of vintage automobiles, trains, and even land speed racing motorcycles, Guillaume pondered how that approach to design would translate onto the venerable Sportster. The streamlined Sportster that Harley-Davidson never built, if you will. Armed with 2D renders based off a simple pencil sketch, he looked for ways to bring his concept to life. 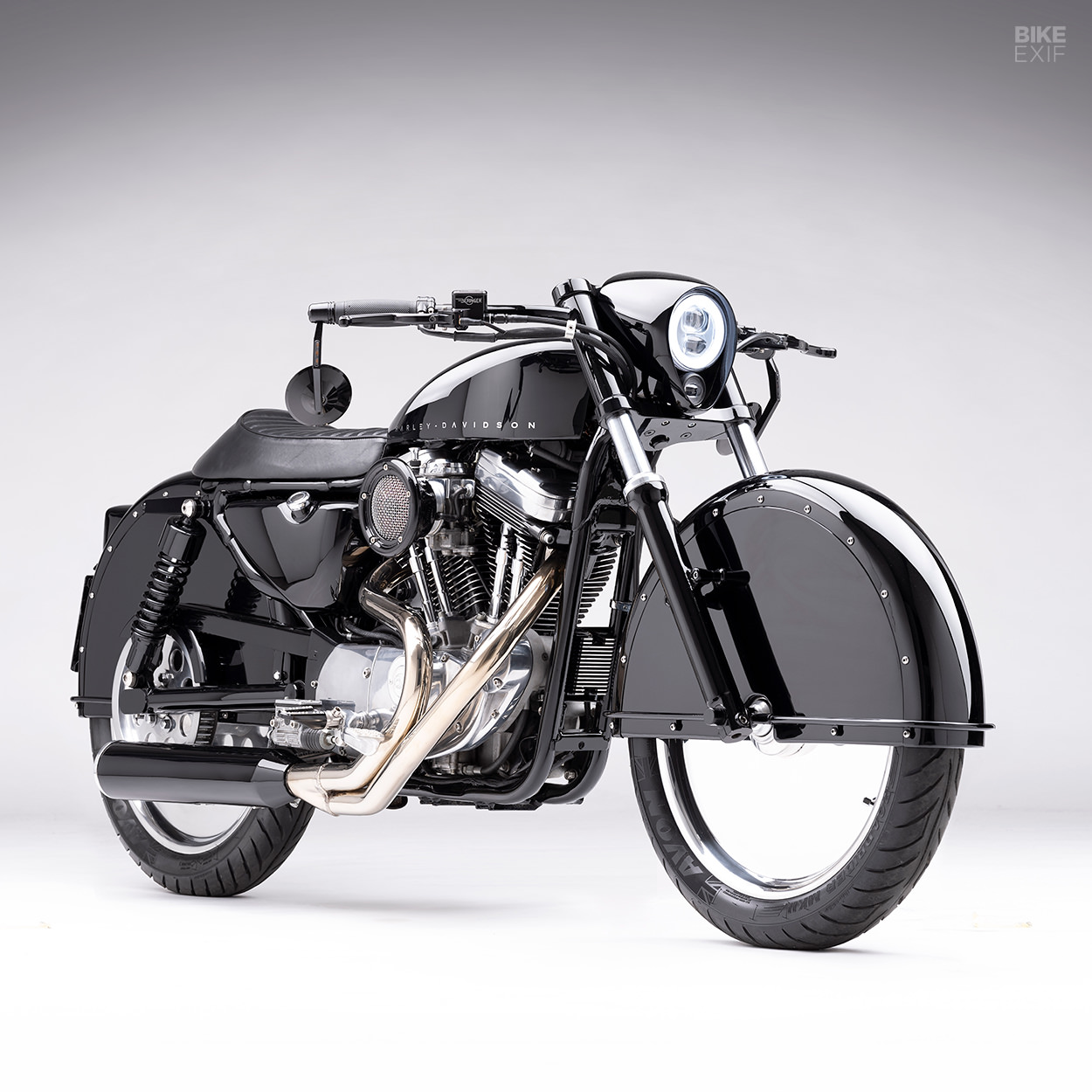 Based in Lyon, Guillaume is an experienced graphic, furniture and interior designer. But although he’s a total bike nut, he doesn’t have all the skills needed to build a custom motorcycle from scratch. So he assembled a dream team of craftsmen to do the heavy lifting.

Starting with a 1998-model Harley-Davidson XLH1200 Sportster and a plethora of technical drawings, Guillaume started farming out each job. 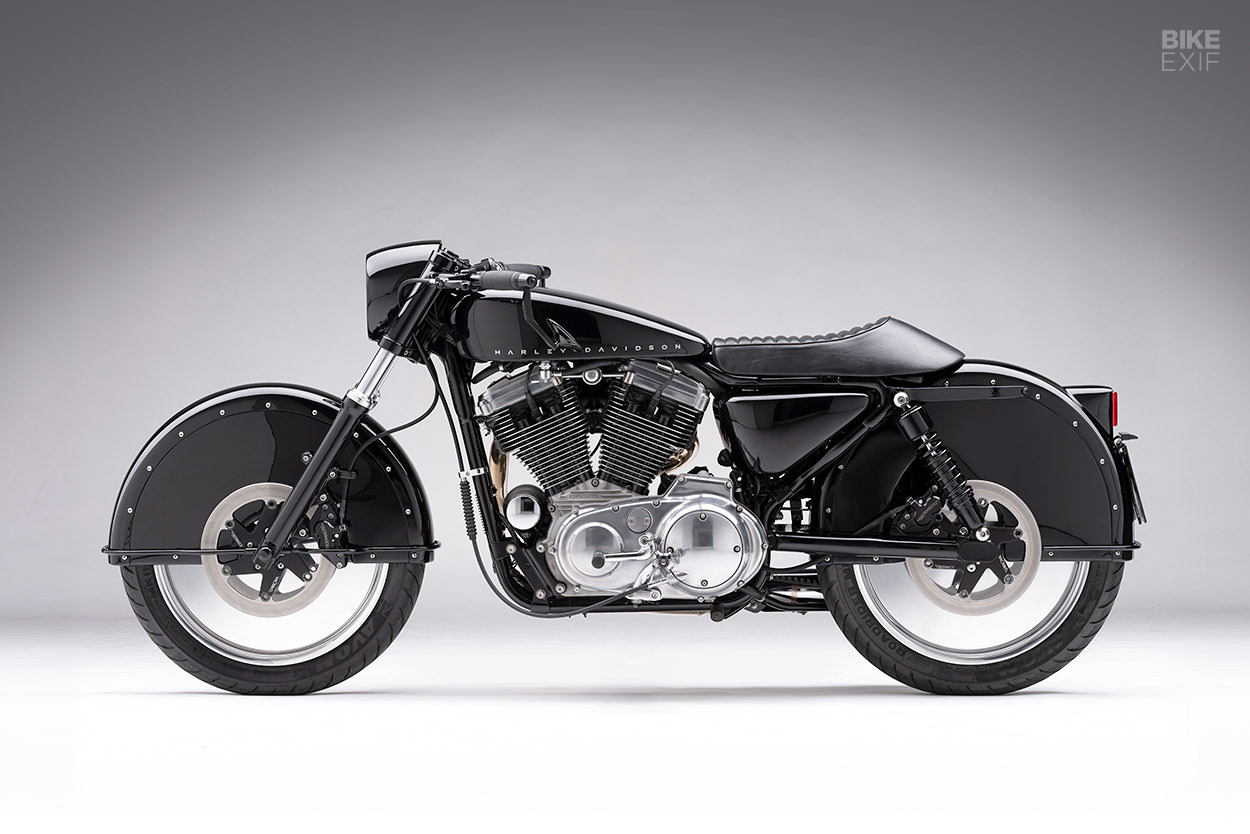 First up to the plate was master metal-shaper, Cédric Trenquier at Cévennes Rétromotors. Working from Guillame’s designs and cardboard templates that he’d created, Cédric set about forming the Sporty’s new aluminum bodywork.

His most distinctive pieces are the generous fenders; tastefully lined with rivets, they contribute greatly to the Harley’s vintage streamliner vibe. He also shaped the headlight nacelle, a battery cover, and an integrated rear housing that holds two vertical taillights. And he built the bike’s elegantly tapered fuel tank. 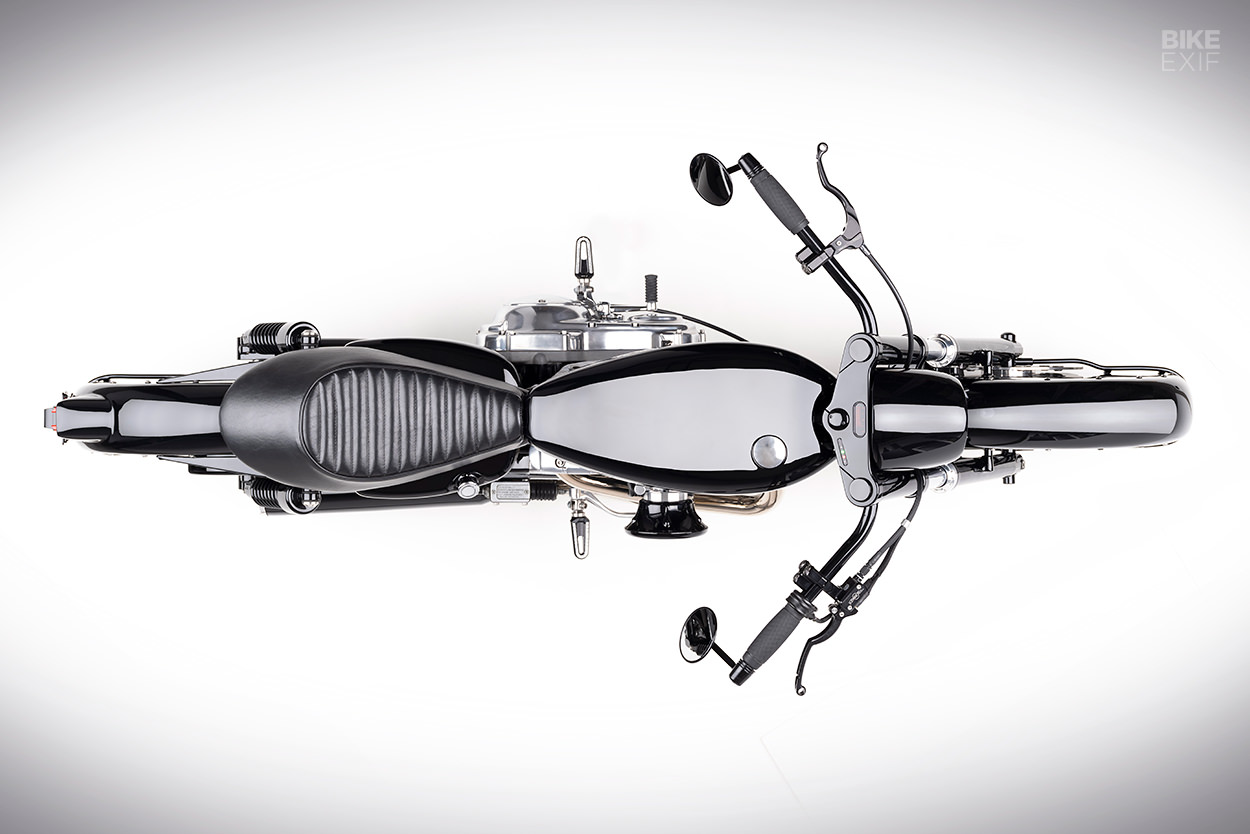 Cristophe Decombard from Eight Cycles tackled the rest of the fabrication, starting with a new tubular steel swingarm. He also built the handlebars, which mimic clip-ons but are actually integrated with the fork covers. The fender struts, brake caliper mounts, top yoke and bracket for the Lithium-ion battery are all his work.

Cristophe also took point on all the mechanical stuff—like rebuilding the motor and overhauling the electrical system. For the exhaust, he modified a set of Supertrapp headers and a repurposed Harley Breakout tailpipe to work together. And he took care of stripping the bike for paint, and putting it back together. 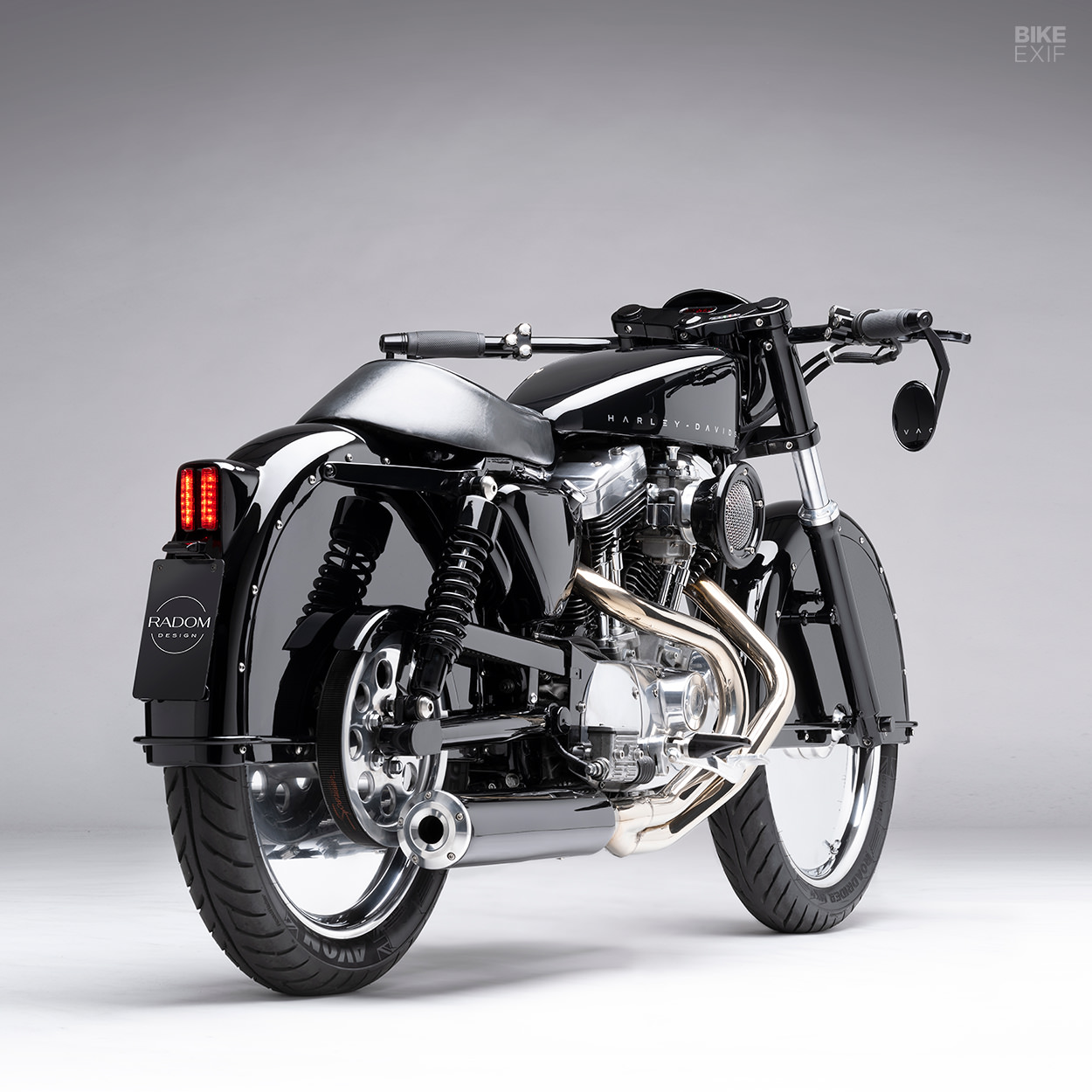 For the wheels, Guillame called on Metalsport Wheels to machine up a set of solid aluminum discs. Measuring 19” at both ends, they’re wrapped in Avon Roadrider tires. The brake calipers, discs and master cylinders are all Beringer Aeronal units.

Complementing the custom bits is a laundry list of tasty aftermarket parts. The air intake is a Kuryakyn Velociraptor unit, and blends with the rest of the design effortlessly. 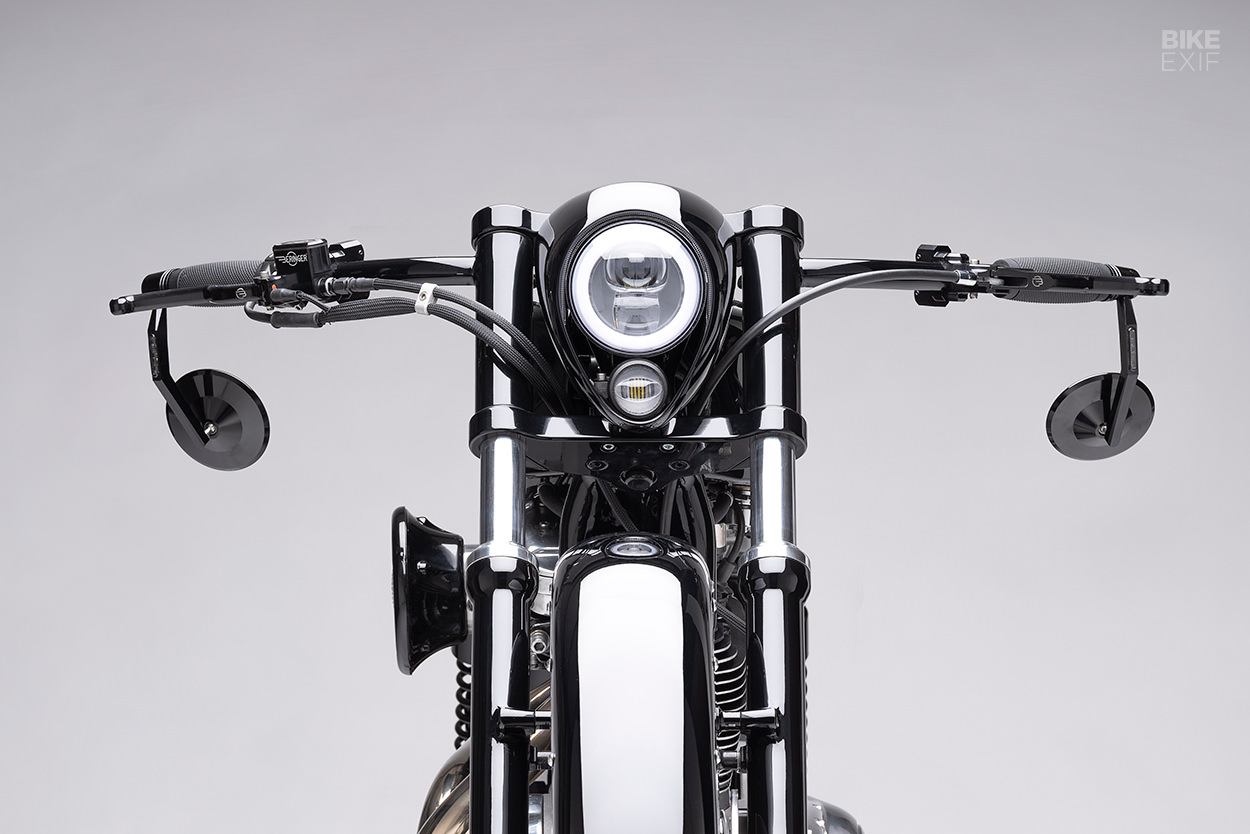 Up top is a small Motogadget speedo, sunk into the top yoke. Other upgrades to the cockpit include new grips, micro switches, and Highsider bar-end mirrors with integrated LED turn signals. The ignition now sits just below the fuel tank on the left, suspended between the cylinder heads by a tidy little handmade bracket.

There are new footpegs further down, and a pair of rear LED turn signals poking out from under the seat. 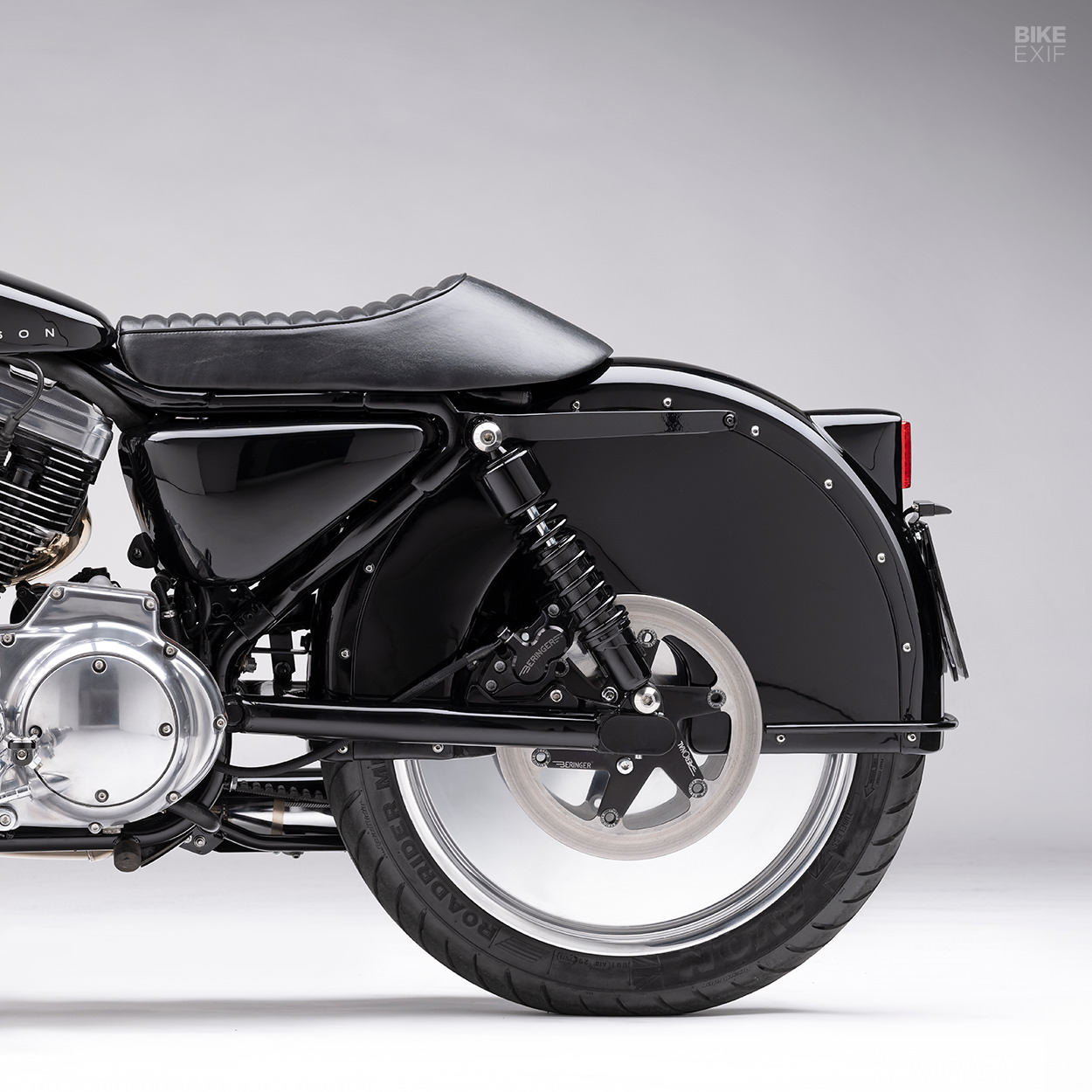 Finishing touches come from Olivier Habault, who upholstered the seat, and L’Aero, who laid down the paint. It looks like a simple job, but it actually took multiple clear coats and much polishing to achieve the deep piano black effect you see here.

In fact, nothing on the project was quick and easy. Guillaume actually pencilled the first sketch for this idea four years ago—and estimates that 1,400 hours have been spent on realizing it. 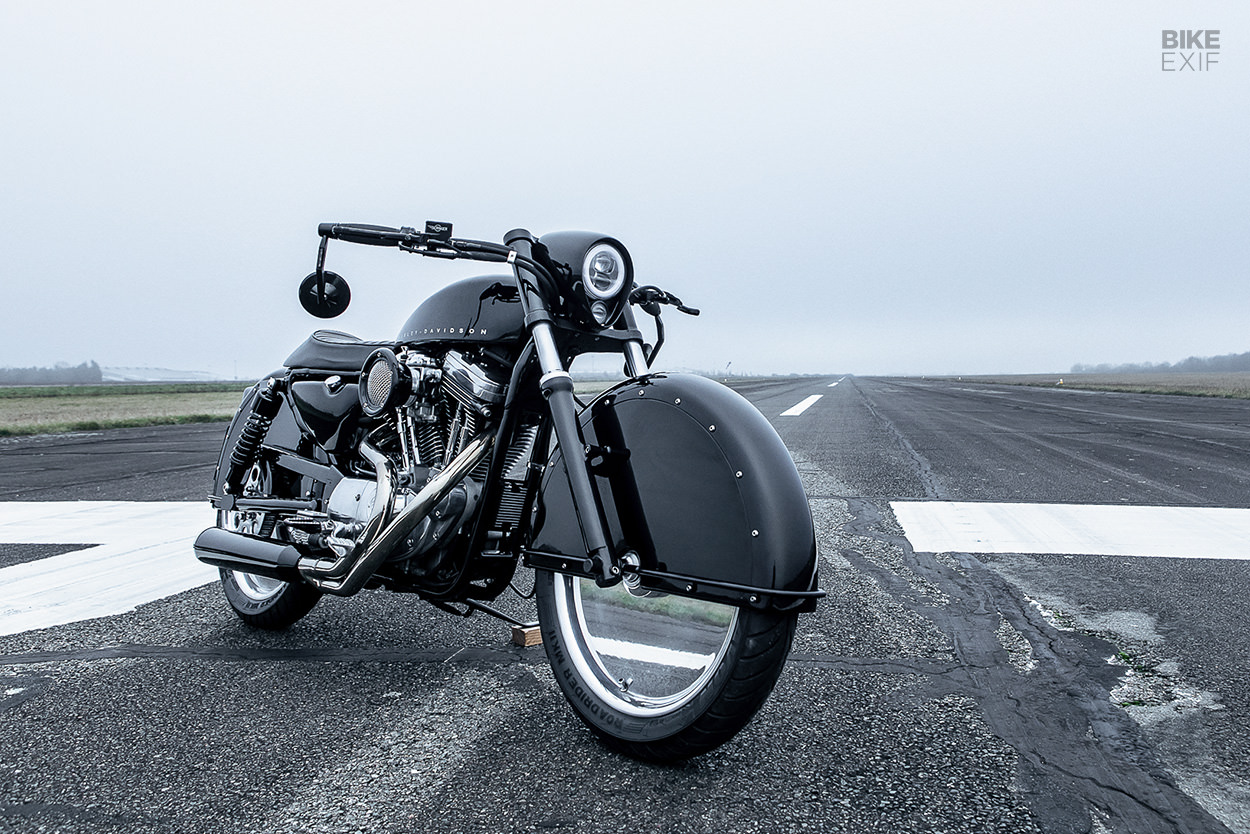 But what’s really impressive here, is how cohesive the final product is. It’s a testament not only to Guillaume’s vision, but also to how well each individual craftsman’s work complements the next.

Let’s hope we see more from this dream team in the future. 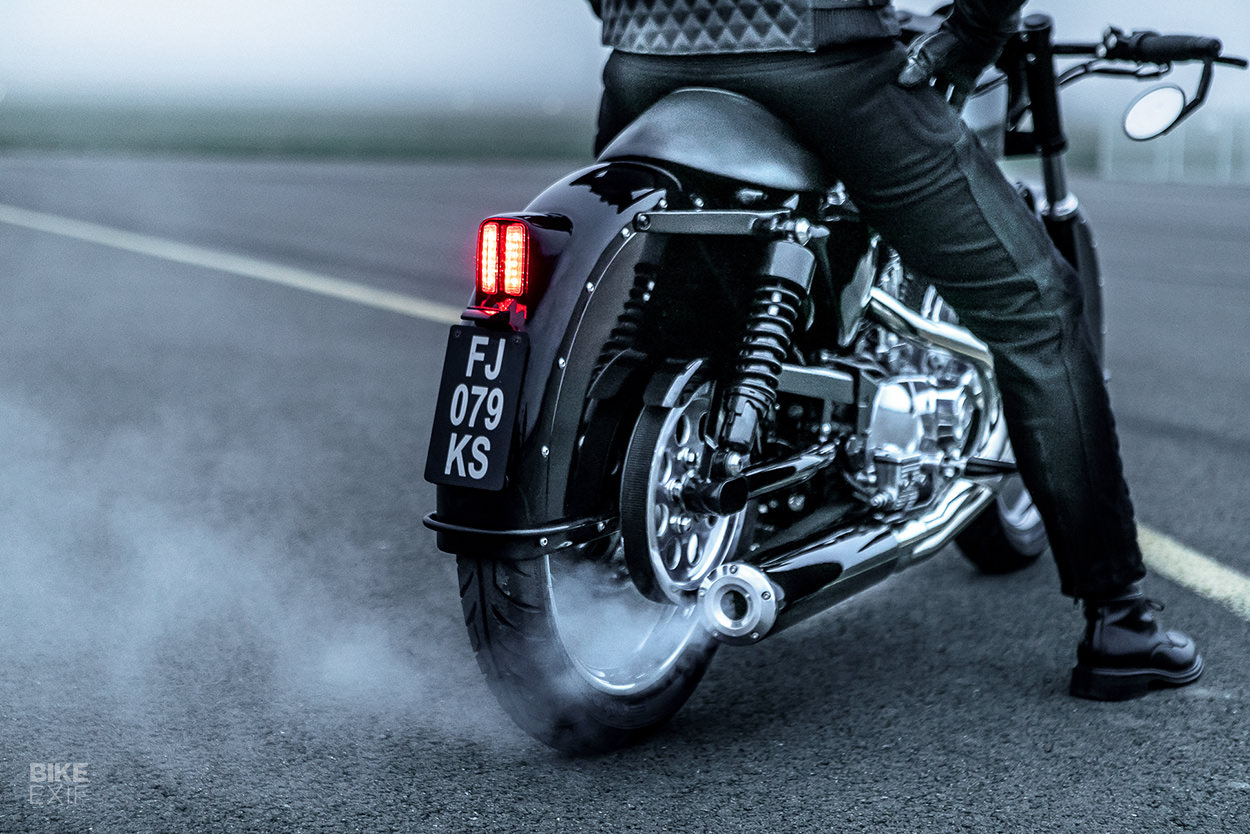