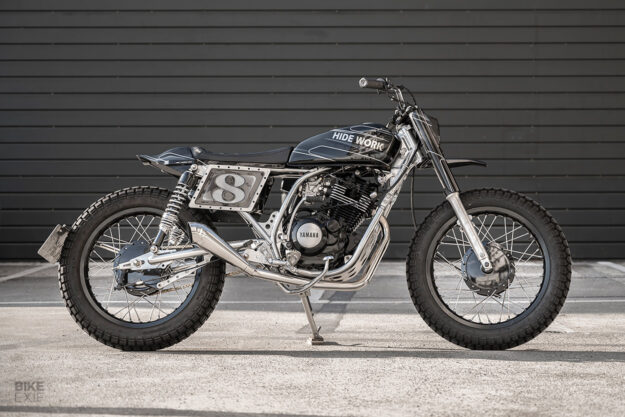 If you live outside of Taiwan, you’re probably not familiar with the Yamaha SR150. It was exclusively made and sold locally, and eventually discontinued. But the flourishing Taiwanese custom scene has given it a second lease on life—and thrust it into the international spotlight.

This is the third custom Yamaha SR150 we’ve featured recently, and each has come from a different workshop. This one’s the work of Huang Wen Chi of Hide Work Custom, based in Taoyuan City. 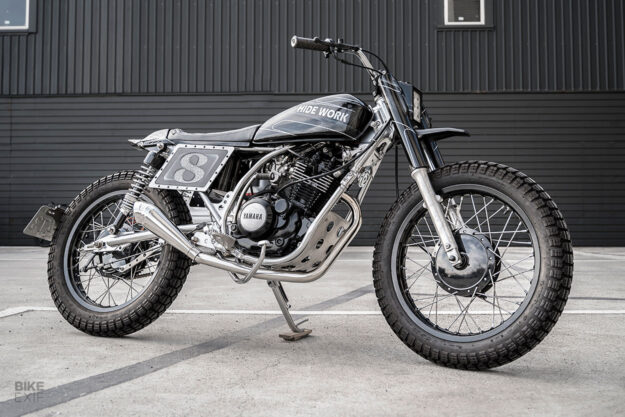 He goes by ‘Achi,’ and he’s been obsessed with motorcycles since childhood. He apprenticed as a lathe and mill operator after he graduated high school, then turned it into a 15-year career. Then, six years ago, he gave it all up to focus on building custom bikes.

Achi works mostly alone, only outsourcing specialist jobs like paint and upholstery. He also takes on an apprentice from time to time, or has friends help out (like his neighbor, Leon, who translated the details of this build for us). 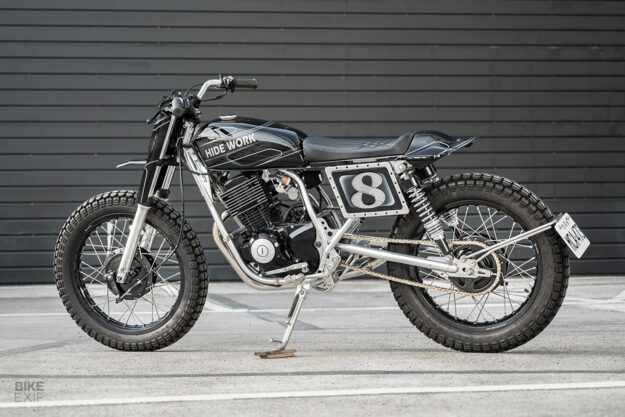 The brief for this 2000-model Yamaha SR150 was blissfully simple. The client threw out the keywords “Cyberpunk” and “modern,” and left the rest up to Achi. He responded with a sharp street tracker that’s laden with handmade parts.

It’s a trifecta of good decisions. Achi tweaked the SR’s stance to perfection, built a cohesive body kit, and wrapped everything in stunning monochromatic finishes. 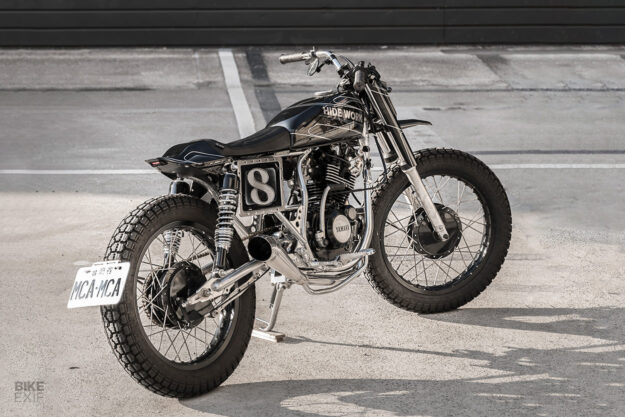 Since the stock bike is considered dependable rather than rowdy, most of its running gear is adequate for the average rider. Achi simply installed an extended swingarm from Mark Motorcycles to get it to sit just right, then matched it to a pair of longer-than-stock shocks.

He also re-laced the OEM hubs to 18” rims, and added classic-looking scrambler tires from Duro. 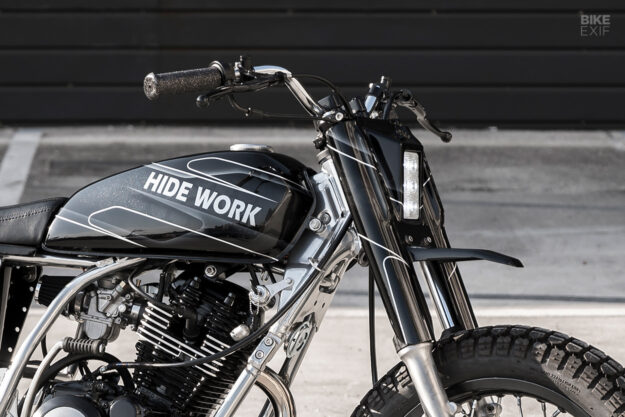 Up front is a custom headlight nacelle, fitted with an LED light lifted from a car. But it’s a cut above the usual number board-style setups you see on street trackers. Here, Achi combined the headlight section, front fender and fork guards into one hand-shaped aluminum piece.

There’s more of his handiwork out back, where he fabricated an aluminum flat track-style tail section. A local upholsterer shaped the foam seat pad and covered it leather, with a stitching pattern that combines traditional vertical seams with a diamond pattern. Out back is a slim LED taillight, neatly integrated into the tail piece. 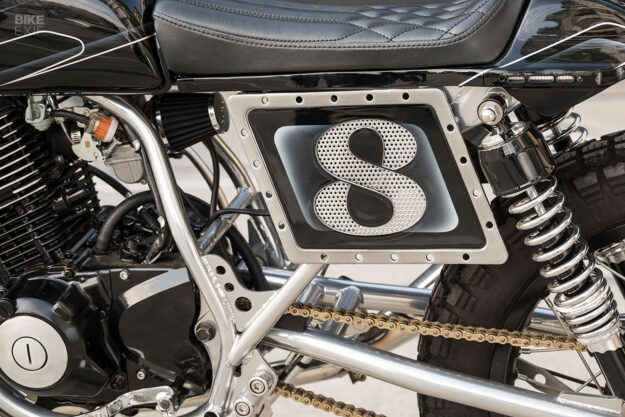 Flanking the Yamaha are a pair of custom side covers bearing the client’s lucky number. Achi built them by hand, using two layers of aluminum and a steel mesh backing. Another custom part sits lower down; a burly bash plate for when the owner takes his SR off-piste.

Then there’s the fuel tank. An inspired choice, it was lifted from another Taiwanese-made motorcycle—an Aeon MY150. With its tapered profile, it neatly links together the front and back, visually. 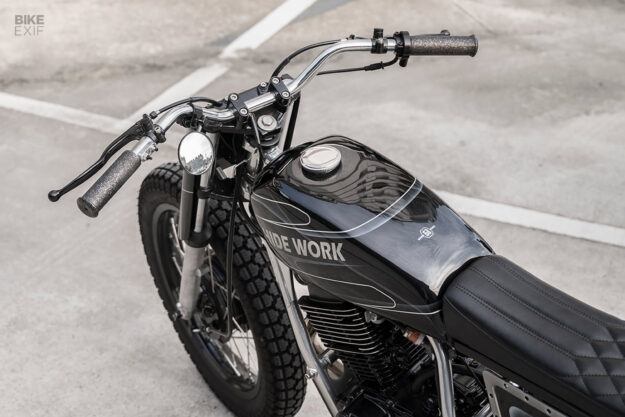 Up in the cockpit are new handlebars, grips and switches, and a discreet bolt-on mirror. Everything came from GarageSail—a local custom parts shop and regular HWC supplier. Achi also added a set of grippy off-road foot pegs.

A custom license plate bracket sits out back, mounted to the swingarm on just one side. And if you’re looking for the Yamaha’s turn signals, they are there; Achi built them into the sides of the headlight plate and tail section. 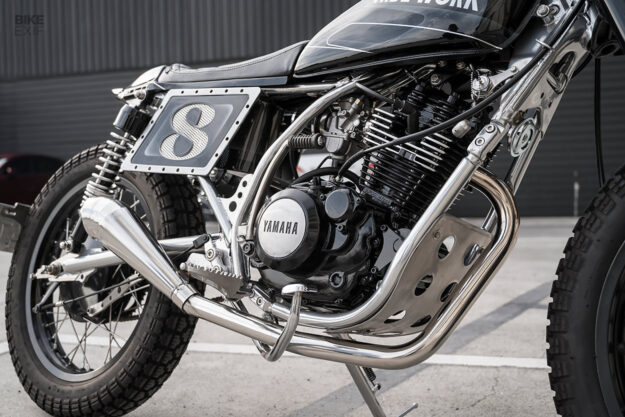 Finer details include a deft reworking of the subframe, some drilled frame gussets and a one-off stainless steel exhaust system. Rover Works laid down the kinetic paint job, which is complemented by a chrome powder coating effect on the frame. Tasty.

HWC’s spin on the Yamaha SR150 is a punchy reminder not to sleep on the Taiwanese custom scene—or this humble donor bike. 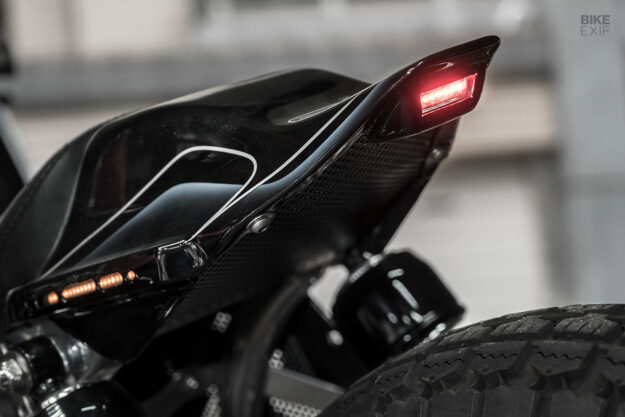