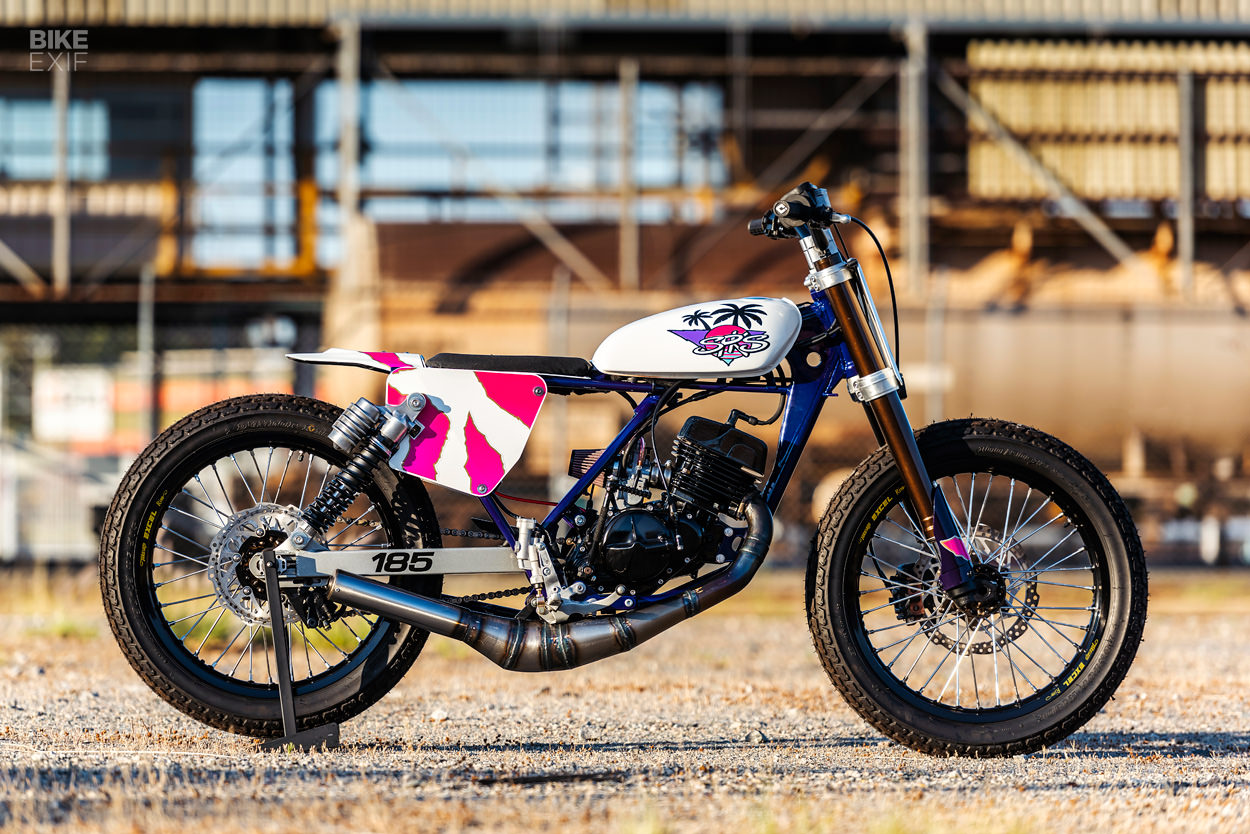 The 90s was a weird and wonderful time for graphic design. And nowhere was this more pronounced than in the motocross scene, where bikes and gear were slathered in retina-searing colors and chaotic patterns. Australian custom builder Cheyne Speak has captured a little bit of that vibe with this Suzuki TS185 street tracker, and we’re all for it.

Cheyne’s based in Perth, where he works as a motorcycle postie (that’s a postal delivery officer, if you’re not familiar with Aussie slang). He’s been into motocross, BMX and hot rods all his life, but this is a first time he’s built a custom street bike. And it’s a stellar effort. 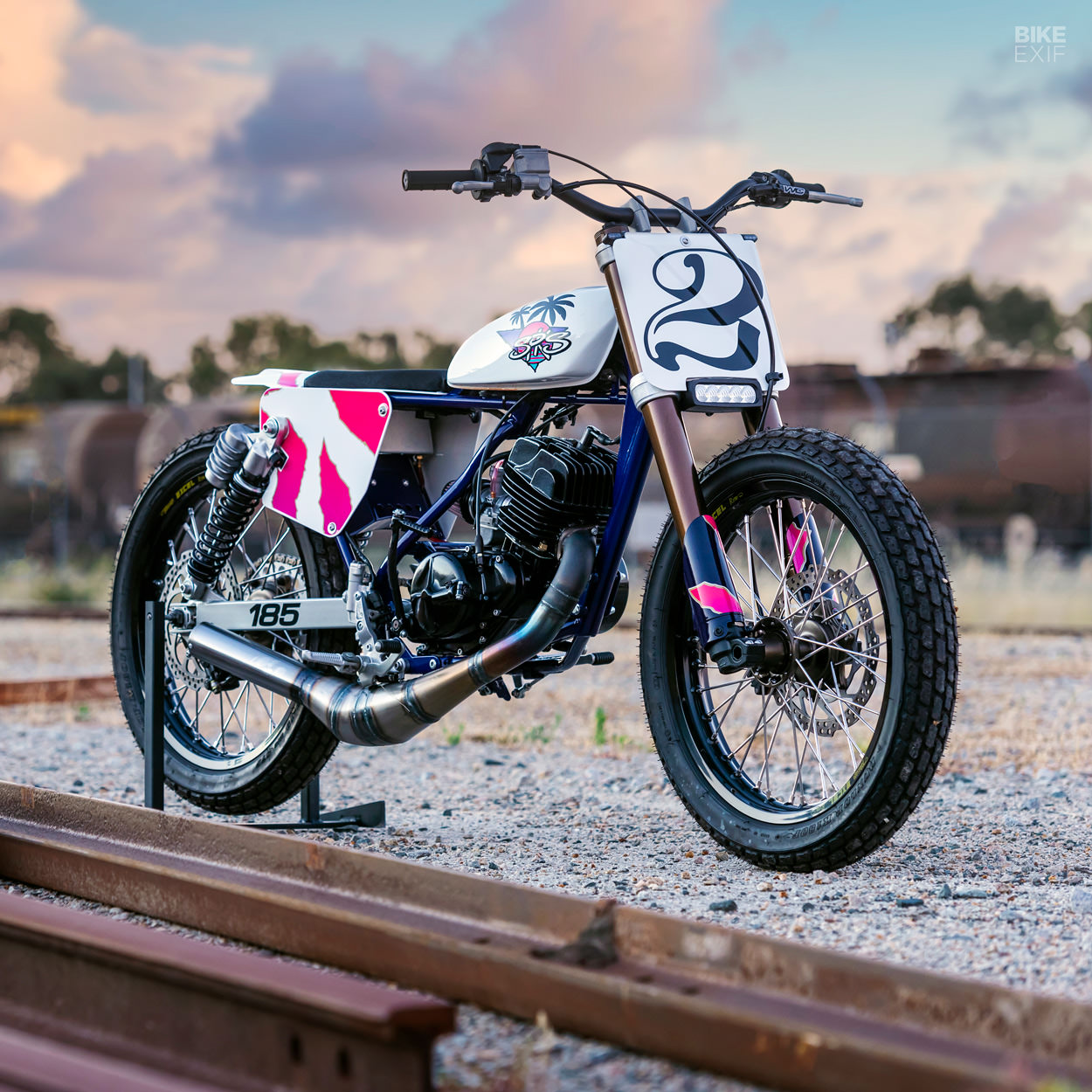 Starting with a basket case 1976 Suzuki TS185, Cheyne kicked off the project with no particular direction in mind. “I stripped it down to a bare frame, put it on the bench and let the bike develop organically from there,” he says. “I basically just designed and fabricated as I went along, just doing I though looked right.”

Cheyne did everything except for powder coating himself, working out of his home garage without any particular sense of urgency—so the project took 18 months to complete. It only cost him about $2,500 though, because none of the parts on it were particularly expensive. “It was a combination of parts I had in my workshop leftover from my MX bike builds, marketplace finds, and parts friends had laying around,” he explains. 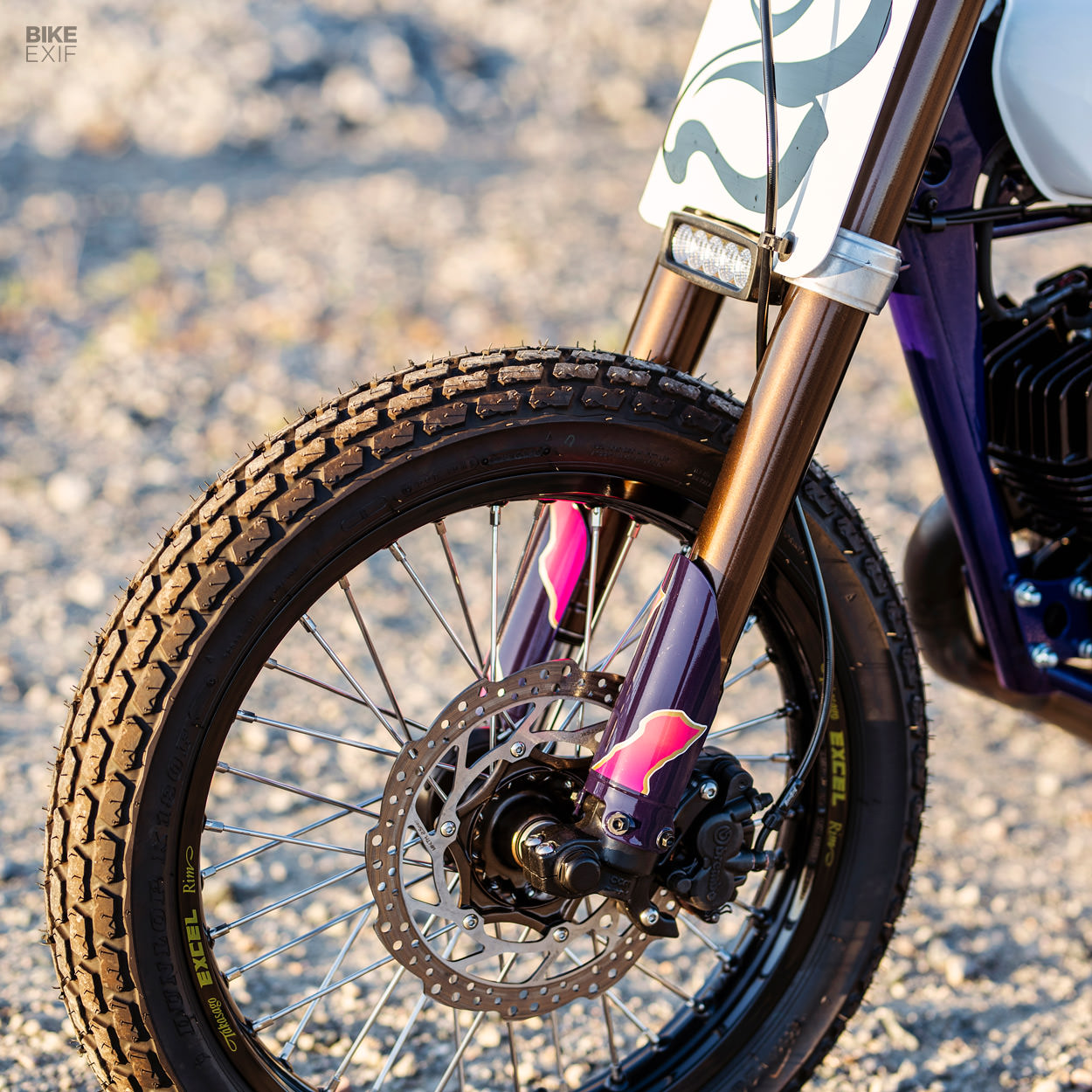 Up front are the forks, yokes, hub and brake from a KTM 450 SX-F, traded from a friend for a case of beer. Cheyne welded the KTM’s head tube to the TS frame, and slammed the forks with internal spacers and new springs. The conversion’s steepened the Suzuki’s head tube angle by about 6 degrees.

Out back is a custom swingarm, measuring almost 2” longer than stock. Cheyne fabricated it himself, using the pivot tube and bearings from Yamaha YZF-R15, and the axle blocks from a YZ250. It’s connected to a pair of Kawasaki Zephyr 750 rear shocks; a cheap secondhand find. 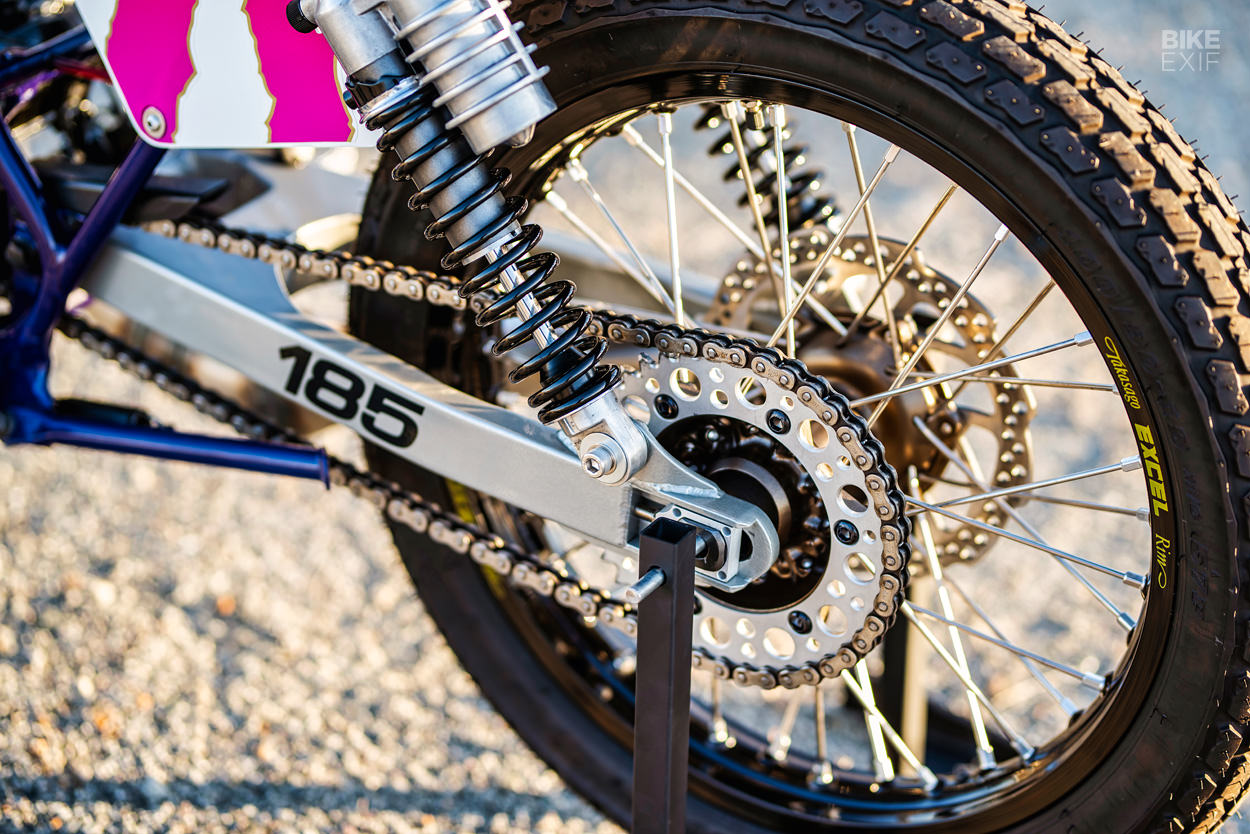 The rims are 19” Excel items, wrapped in Dunlop K180 flat track tires. Cheyne used the YZ250 brake caliper out back, mounting it upside-down and routing its hose through the swingarm. Other changes include custom wheel spacers, Zeta wave discs and Renthal sprockets.

It’s a drastic change to the overall geometry, but Cheyne says it’s paid off. “Even with the extended swing arm, the wheelbase is close to stock due to the steepened head tube angle. As a result the steering is more responsive and the weight of the bike is now more centralized, and with the low ride height it feels like riding a BMX with an engine.” 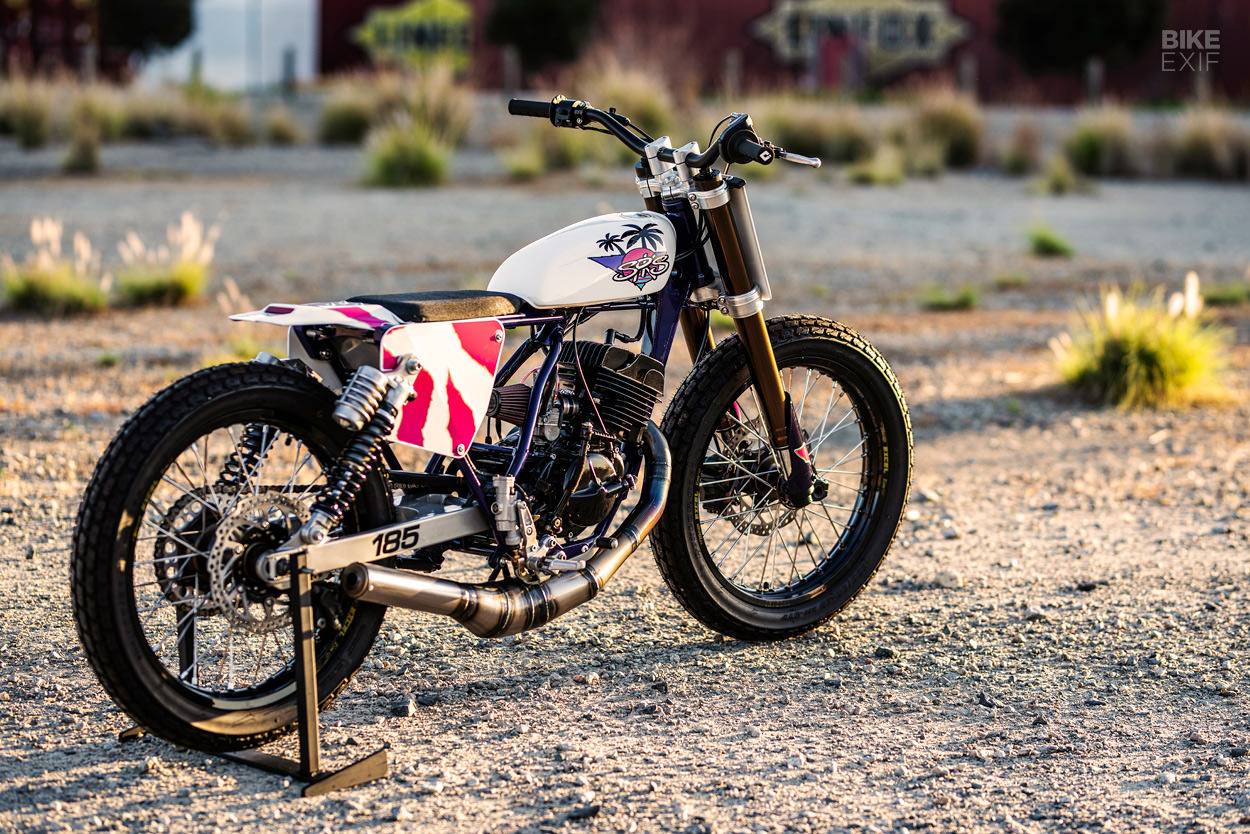 Under the hood, Cheyne treated the two stroke Suzuki mill to what he describes as “a bare minimum rebuild with a half-assed port job.” It runs with a no-name-brand flatslide carb and a DNA Filters filter, and the bike’s been rewired with a 12V conversion and a Yamaha TTR110 battery.

The exhaust was pieced together from scratch, using Pro Circuit internals for the silencer. “I didn’t use any software when designing and building the pipe,” Cheyne tells us, “I just welded a bunch of cones together into a shape that I thought looked like it would work. It made a big increase in power in the mid-high rpm range and it sounds like a 125 cc motocross bike.” 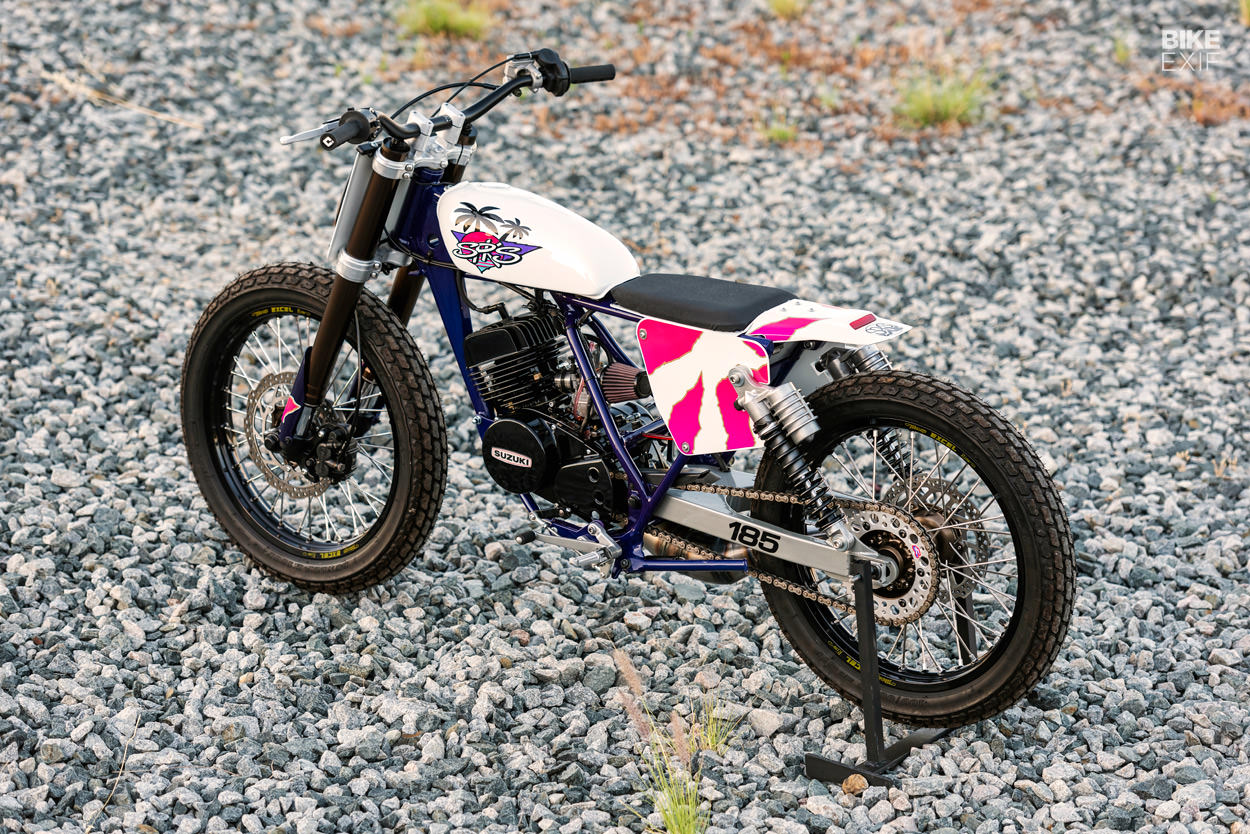 There are more changes up top, where he installed a smaller 1975 Suzuki TM75 fuel tank, retrofitted with a pop-up gas cap. Out back is a custom subframe, carrying a barely-there seat covered in high density foam and a recycled KTM 250 SX-F seat cover. The seat pan and number plates were shaped from aluminum, along with the custom oil tank hiding behind them.

The rear fender and LED taillight are from a Honda CRF, chopped and shaped to fit the Suzuki. An LED light bar handles headlight duties, with tiny LED turn signals fitted at both ends. 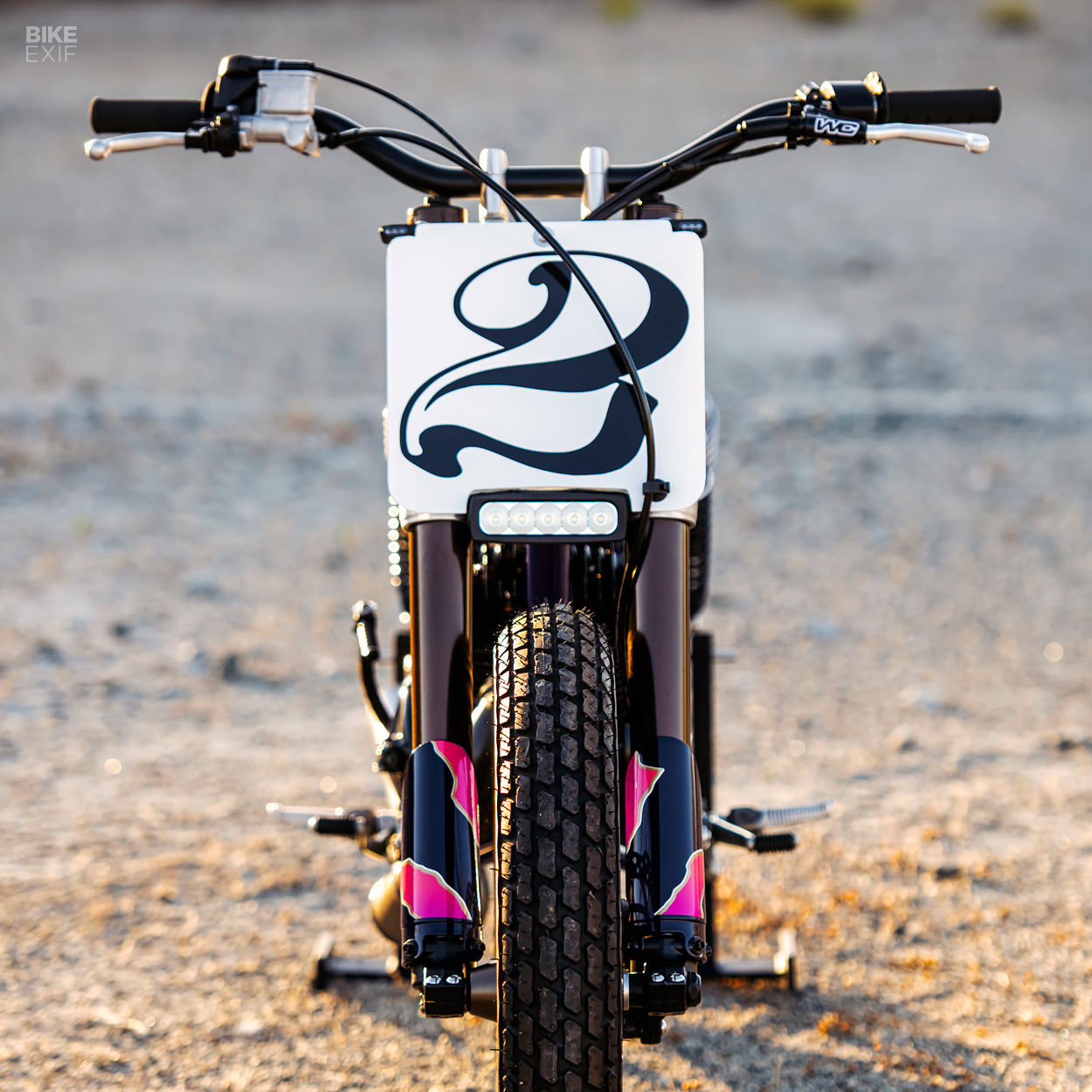 As for the throwback 90s livery, that was something that happened by accident. “When I dropped the frame off at powder coat I asked for it to be royal blue,” Cheyne explains. “When I went to pick it up I saw it had been done in purple instead.” 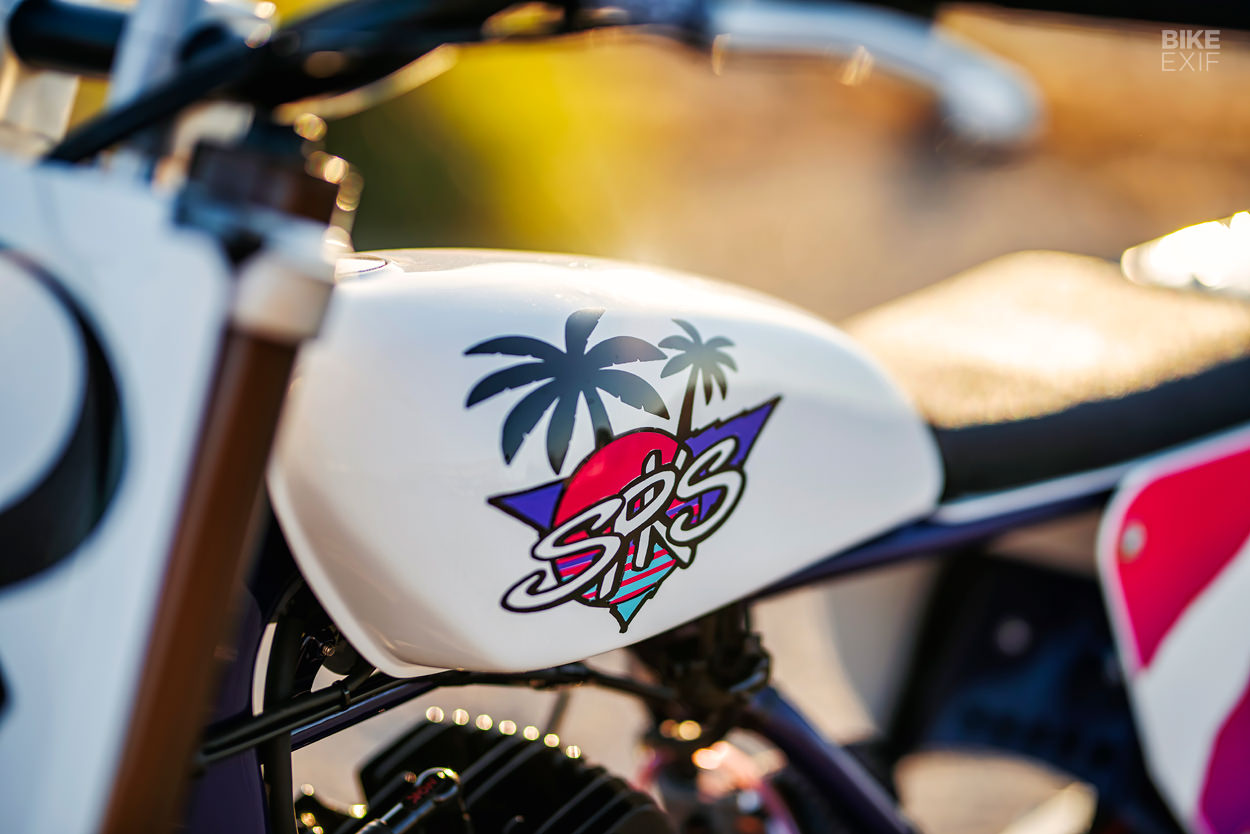 “Rather than get them to re-coat it, I decided to base the rest of the paint and graphics theme around the purple frame.”

The number boards and rear fender wear 1992 Suzuki RM125 vinyls, cut and shaped to match. Cheyne did the tank graphics himself, pulling colors from the frame and RM stickers. The “SPKS” motif is for the name of his workshop: SPKS Lab. 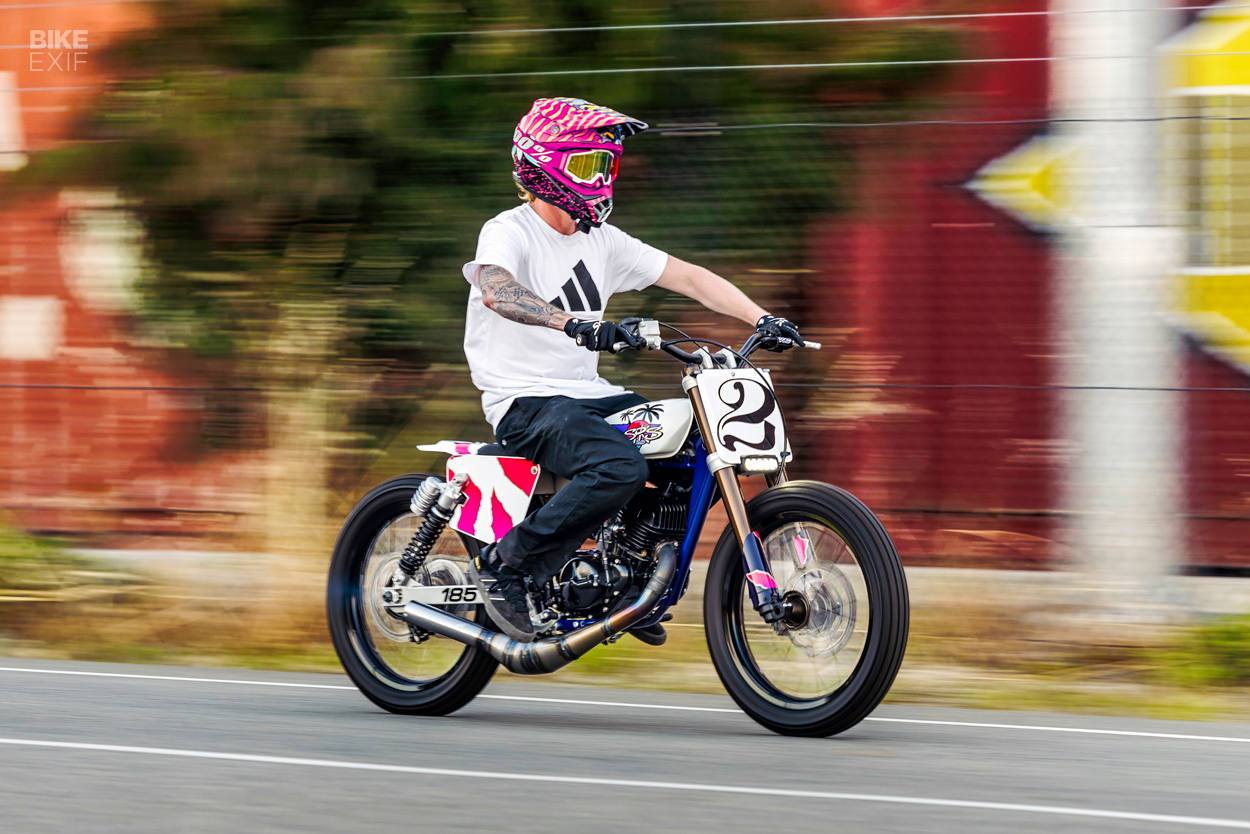 Weighing in at around 90 kilos [198 lbs] now, and looking slightly sketchy and super fly all at once, Cheyne’s TS185 probably won’t appeal to everyone. And he’s totally fine with that.

“I wanted to build this bike one hundred percent for myself. If other people like it too, that’s cool—but if they don’t, that’s cool too.” 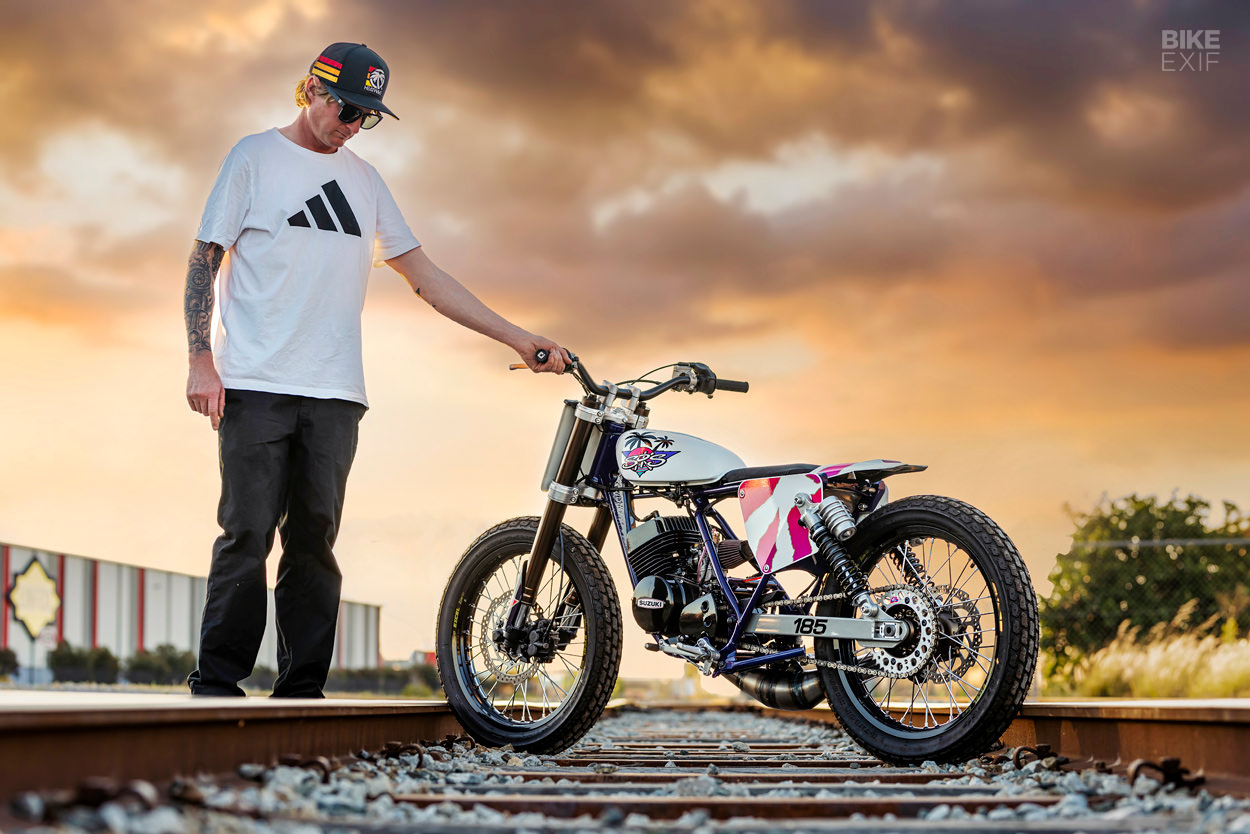