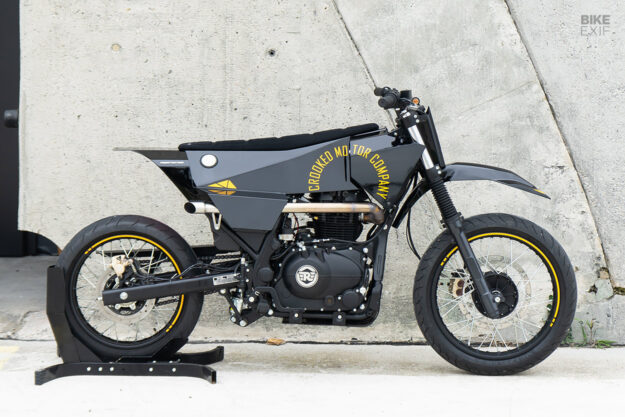 While many motorcycle brands are still struggling to meet manufacturing demands, Royal Enfield is flourishing. Not only have they been consistently releasing new models, but they’ve been commissioning some amazing custom builds as well. The latest is brought to us by Crooked Motorcycles in Germany; a Royal Enfield Scram 411 turned supermoto, with some impressive details.

Since the build was commissioned by Royal Enfield, the the project essentially had two goals. It had to express the creative drive of the builders behind Crooked, and it had to highlight the Scram 411 as a platform. This meant getting the most visual impact out of the design without really altering the stock bike’s geometry; a challenging feat. 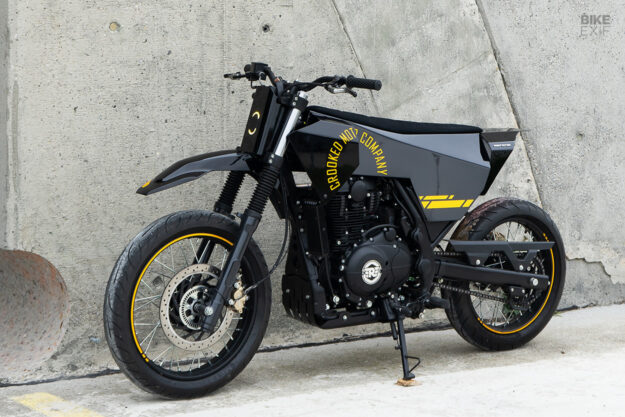 Royal Enfield’s 2022 Scram 411 is a variation of the brand’s popular light adventure bike, the Himalayan. The Scram essentially uses the same chassis, with some pieces like the crash bar removed, and a smaller 19” front wheel compared to the Himalayan’s 21”. So it’s lighter, more nimble, and less cluttered than its stablemate, straight out the box.

The Scram 411 was delivered to Crooked Moto’s shop only three weeks before the bike was to break cover at the popular Glemseck 101 race meet. With this incredibly short timeline, the team immediately got to work on the largest and most impactful part of the project—the monocoque body. 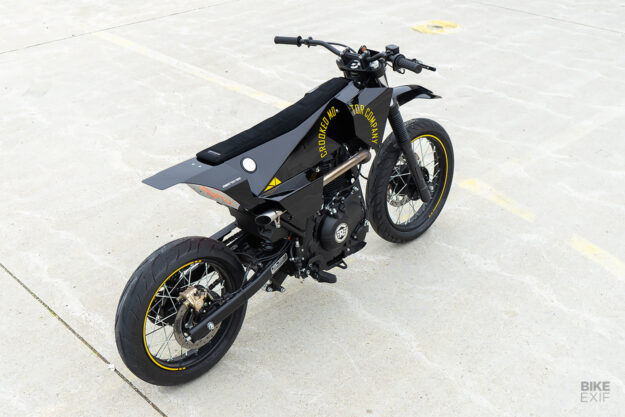 The supermoto aesthetic is largely defined by dirt bike-style bodywork, which Crooked sought to recreate in aluminum, but with a few stylish twists. To achieve this new style, the subframe was removed and replaced with a custom piece that the new bodywork could mount to.

The lines of the newly-fabricated aluminum bodywork left little room for a fuel tank, so Crooked built a new reservoir to sit under the seat. Fitted with a pop-up filler cap, it both lower’s the Scram’s center of gravity—and helps the build better fit the supermoto vibe. A set of aluminum ‘wings’ sit up front, adding some bulk back to where the tank used to be. 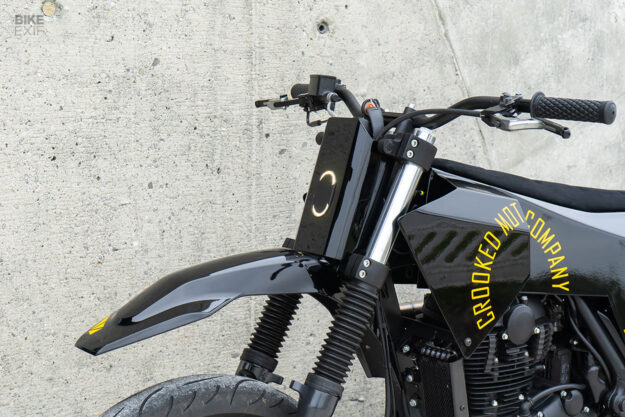 Out front, an aluminum number plate was fabricated around a bright Supernova LED headlight. In the tail section, LED strips were built into the lower part of the rear fender, visible above the wheel. As this machine was made to be displayed more than used on public roads, there is no accommodation for a license plate—nor a speedo or turn signals.

A supermoto will traditionally have 17” wheels front and rear, but the team at Crooked wanted to retain some of the fun and adventurous look of the Scram. So the original 17” rear wheel and 19” front were fitted with Metzeler Sportec M9 tires. A Husqvarna enduro bike fender replaced the Scram’s low-mounted original. 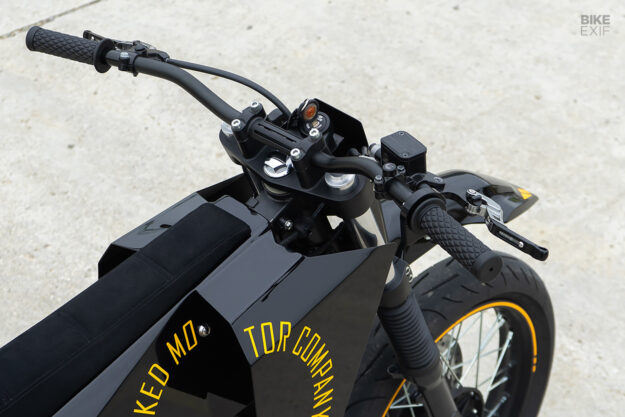 Braking and suspension components remain unchanged, though new Probrake levers and LSL handlebars add a sportier feel to the rider’s view. A short-stroke throttle was installed to increase sensitivity, and the bars were wrapped in Biltwell Inc. grips. The wiring was made to work without switches, with a CNC-machined start button crafted into the bodywork—leaving the whole deal radically uncluttered. 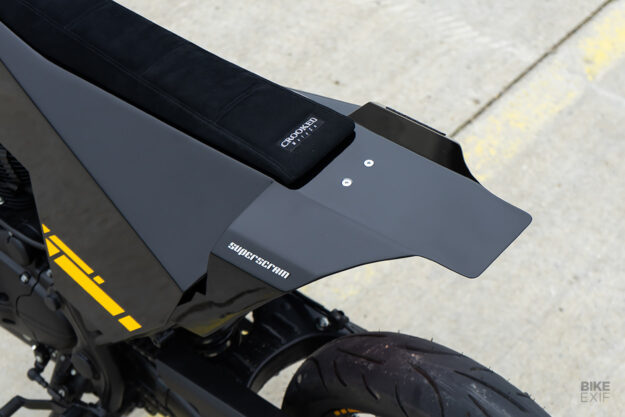 Supermoto is more than a style of bike—it’s a riding style too, marked by tracks that are partly paved and part dirt, requiring the rider to move all over the bike to shift their weight. So a custom Alcantara seat was made, extending all the way from the rear fender to just behind the Scram’s steering head.

A custom exhaust system was made, integrating the lambda sensor and tucked beneath a protective grid, which also hides a heat shield. Finally, Crooked wrapped the ‘SuperScram’ in black, with yellow highlights and subtle branding. 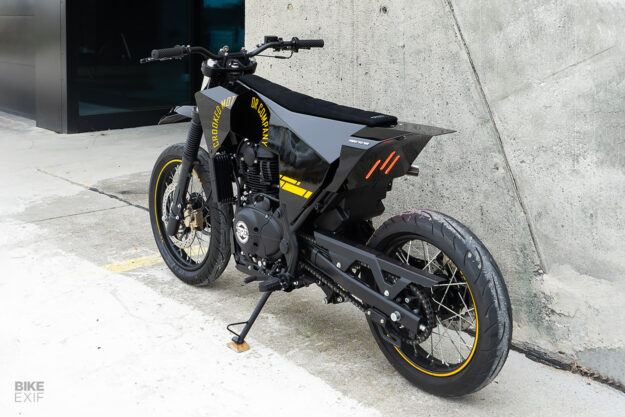 While the operational geometry and engine remain essentially unchanged, Crooked has completely altered the way a rider will interact with this machine. From the hidden start button and ultra-clean handlebar assembly, to the new seating position and lighting, the modifications certainly highlight what you can do with the Scram.