Table for two: A Virago for a chef and his wife 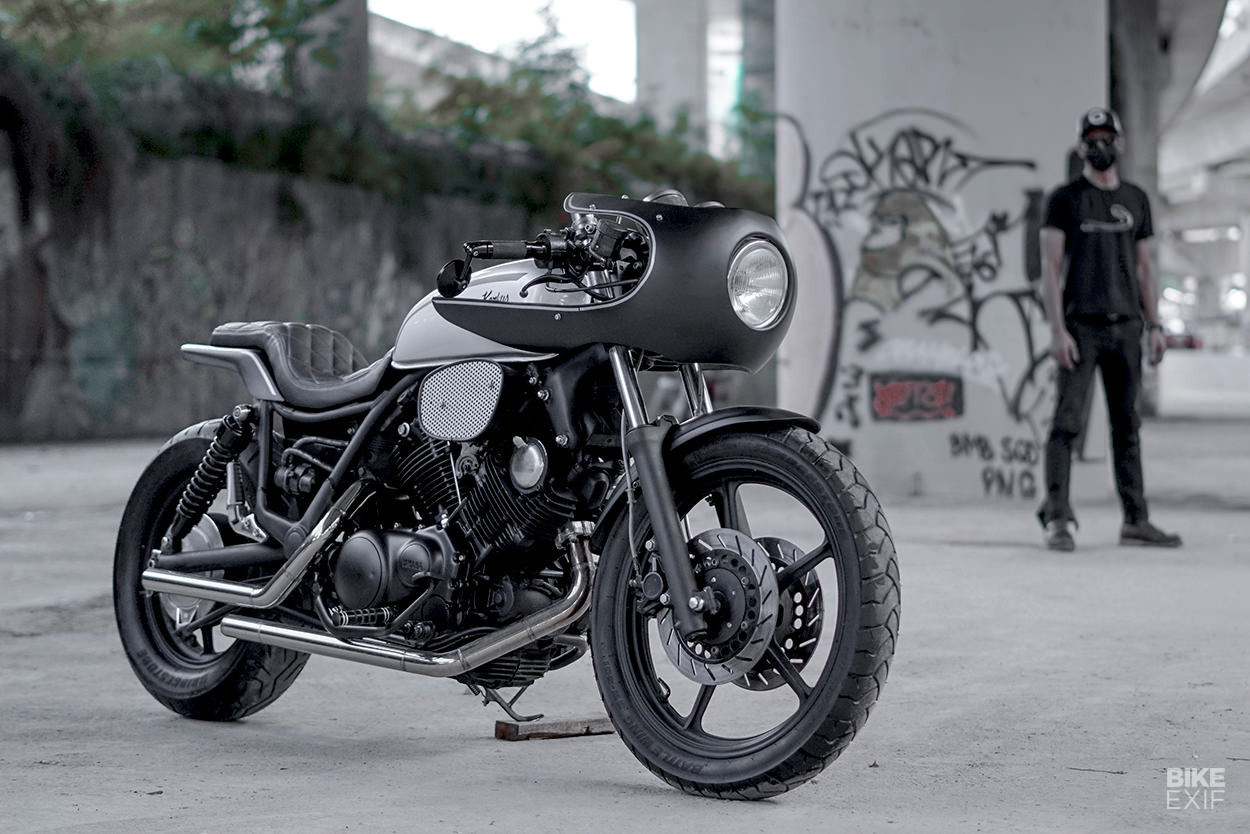 Like the Honda CX500, the Yamaha Virago is one of those “sow’s ear” bikes: it’s a challenge to make a silk purse out of it. Plenty of custom builders have taken the bait, and a few have succeeded.

This Virago from Kerkus in Malaysia is an oddball example, but there’s a reason for it. “The owner is a chef and runs a restaurant,” says shop founder Azahar. “He had an accident on this bike a few years back. He came to us wanting to transform it ‘Kerkus-style’—but he also wanted us to design it so that his wife can sit on the back. That’s hard!” 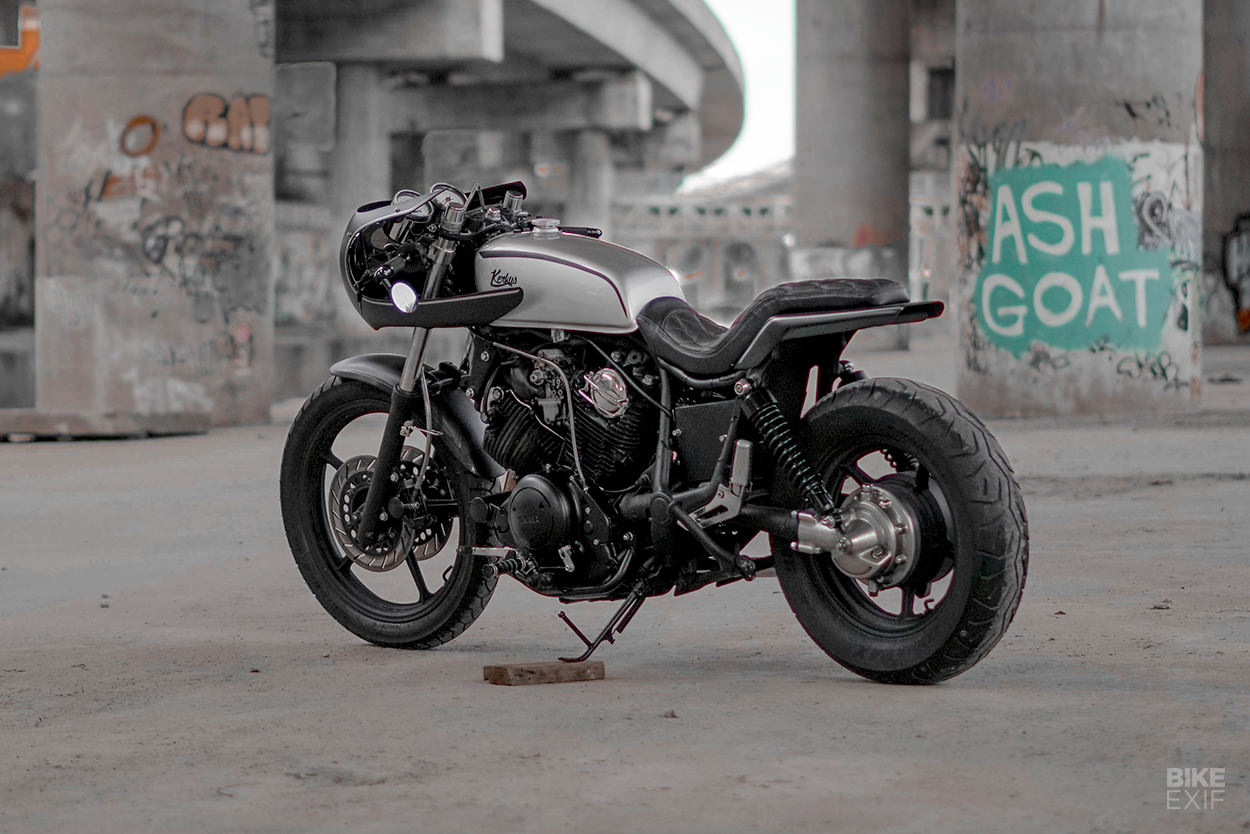 Azahar and his co-founder Raveen have traditionally focused on single seater, café racer builds. But with the pandemic hitting hard in Southeast Asia, they were not in a position to turn down work.

The Virago was Yamaha’s first V-twin chopper-style bike, and originally sported monoshock suspension before switching to conventional dual shocks. This one is a 1995 model, which came with an air-cooled 75-degree V-twin engine—pumping out 61 hp, and a solid 62 ft lb of torque at a leisurely 3,000 rpm. 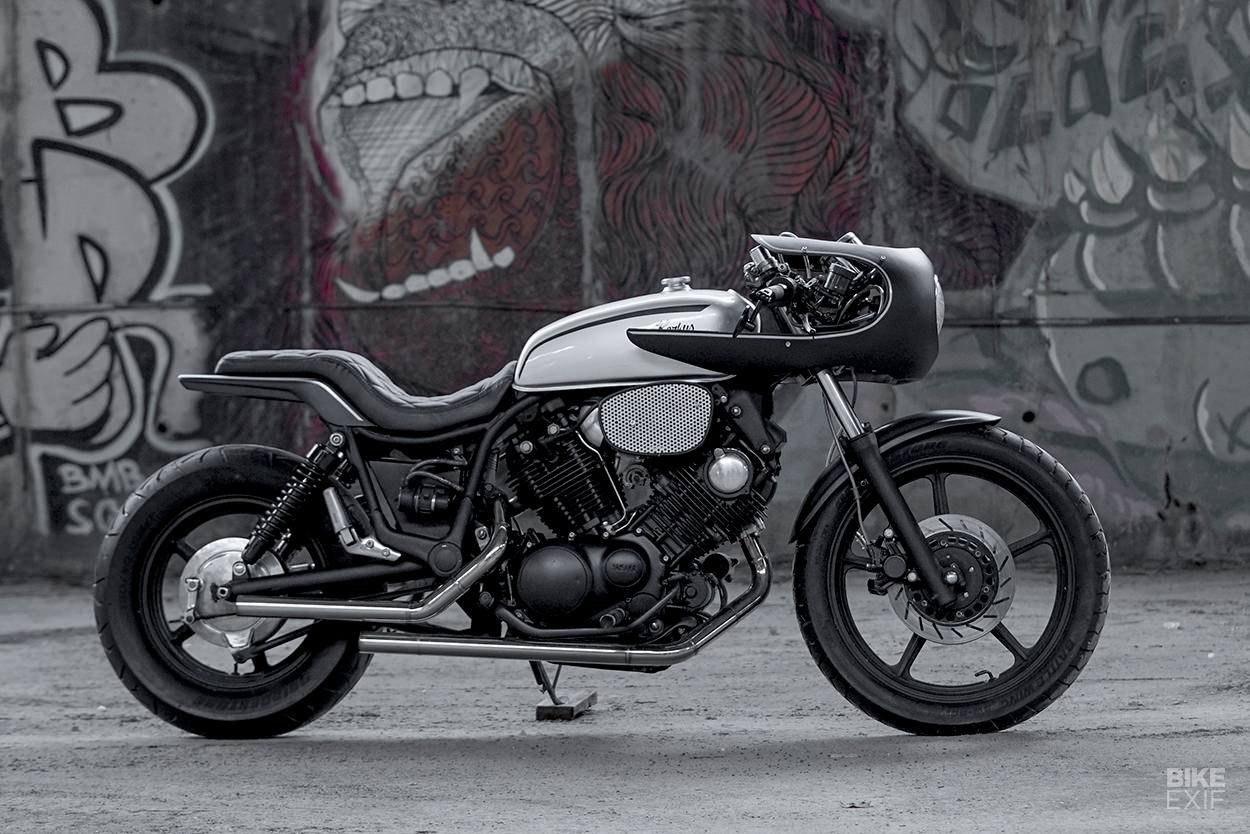 This particular machine had been parked up for a few years, so Azahar and Raveen serviced the engine and managed to get it running again. The stock air filter was damaged in the accident, so Kerkus took what remained of it and re-fashioned a new cover.

Then they rebuilt the seized brakes, refurbished the suspension, and dropped the forks an inch to level out the stance. 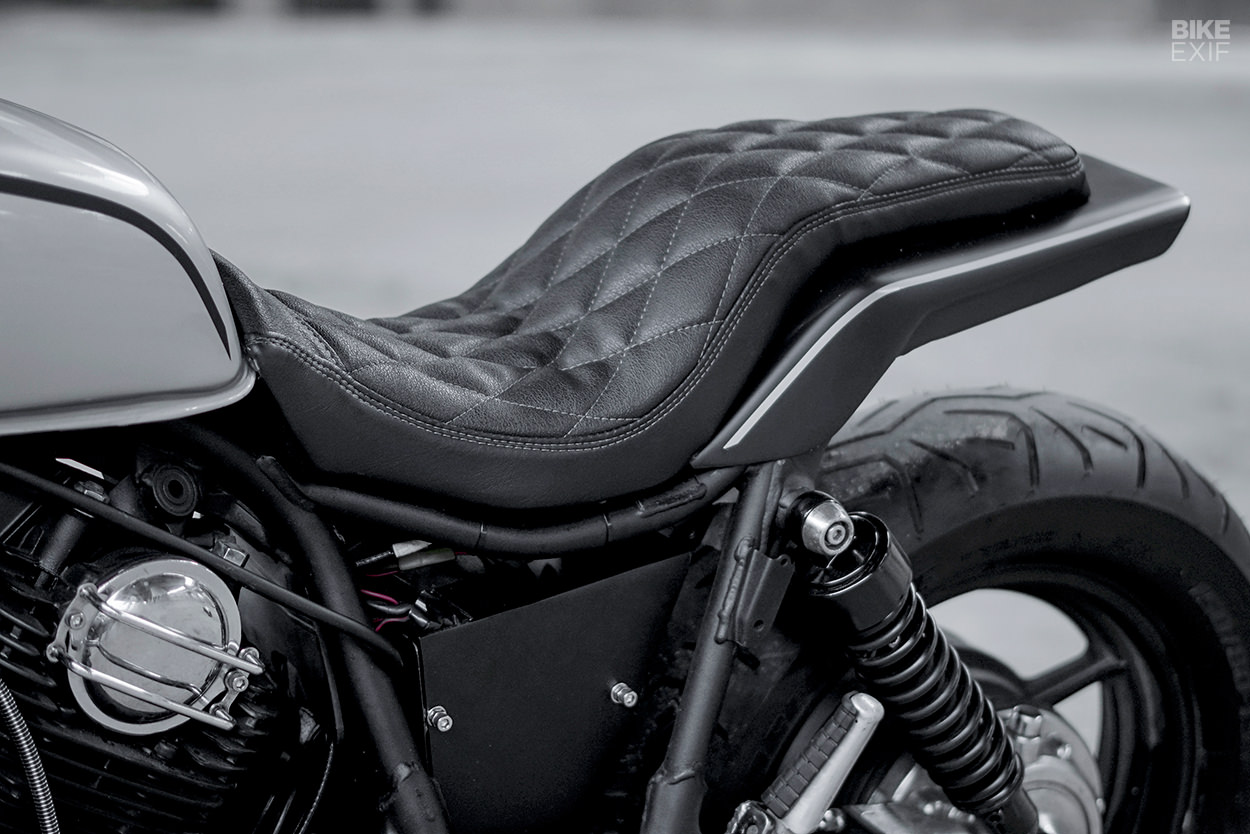 Then it was time to fire up the grinders. The rear frame from the upper shock mounting points is new, with a sharp-edged tail unit doing double duty as a fender and seat support. The original shocks have been replaced with Triumph Bonneville items, slightly longer than standard.

Like the original, the new seat is comfortably padded and stepped—but the cheesy ‘king and queen’ vibe is gone. With plush upholstery and diamond stitching, it’s not a style we often see in the alt.moto scene, but with a rider on board, it looks just fine. 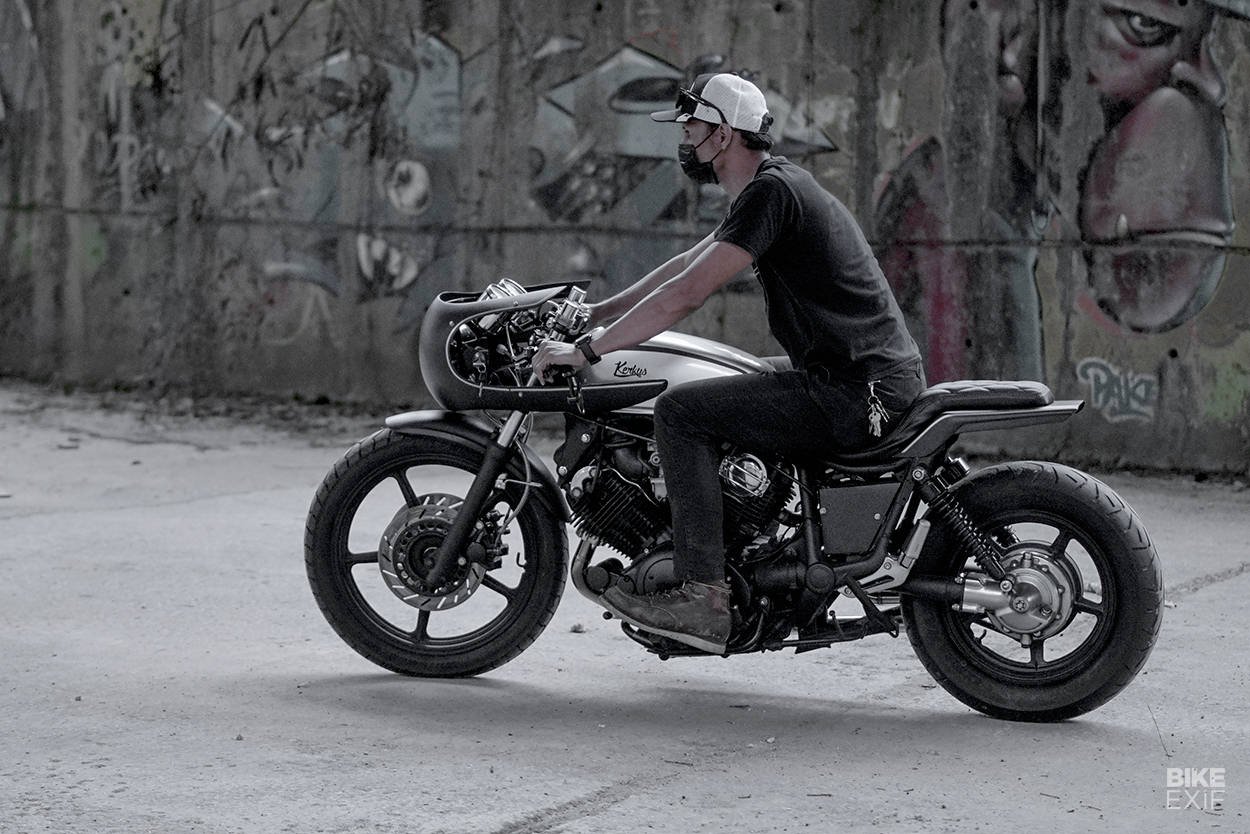 There’s a discreet custom-made battery box right underneath, with the fuel pump alongside. “The pump needed to be relocated, to allow the custom exhaust pipe to flow properly from the engine to the back.”

The exhaust has been designed to look like straight pipes, but thankfully there are hidden baffles inside to keep noise levels down. 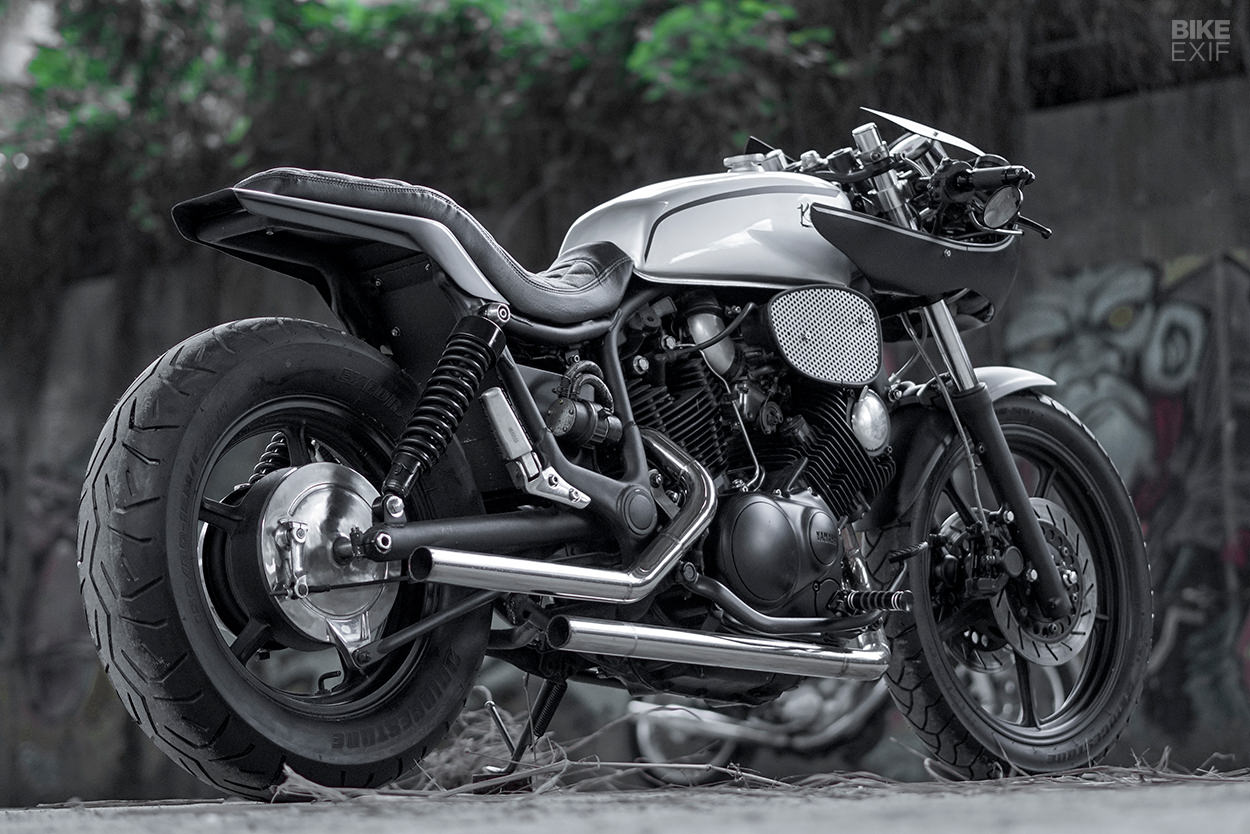 The tank is from a Yamaha RXS, a compact two-stroke that was sold at the same time as the XV100 and is popular in Malaysia. Kerkus have topped it off with a custom aluminum cap and used the petcock from a more modern Yamaha DragStar cruiser.

There’s a distinctly avant-garde touch at the front end, with a fairing minus its windshield. “The bike needed it to hide the long, long forks,” says Azahar. The fairing is made from fiberglass and Azahar fabricated custom brackets to get the fit just right. 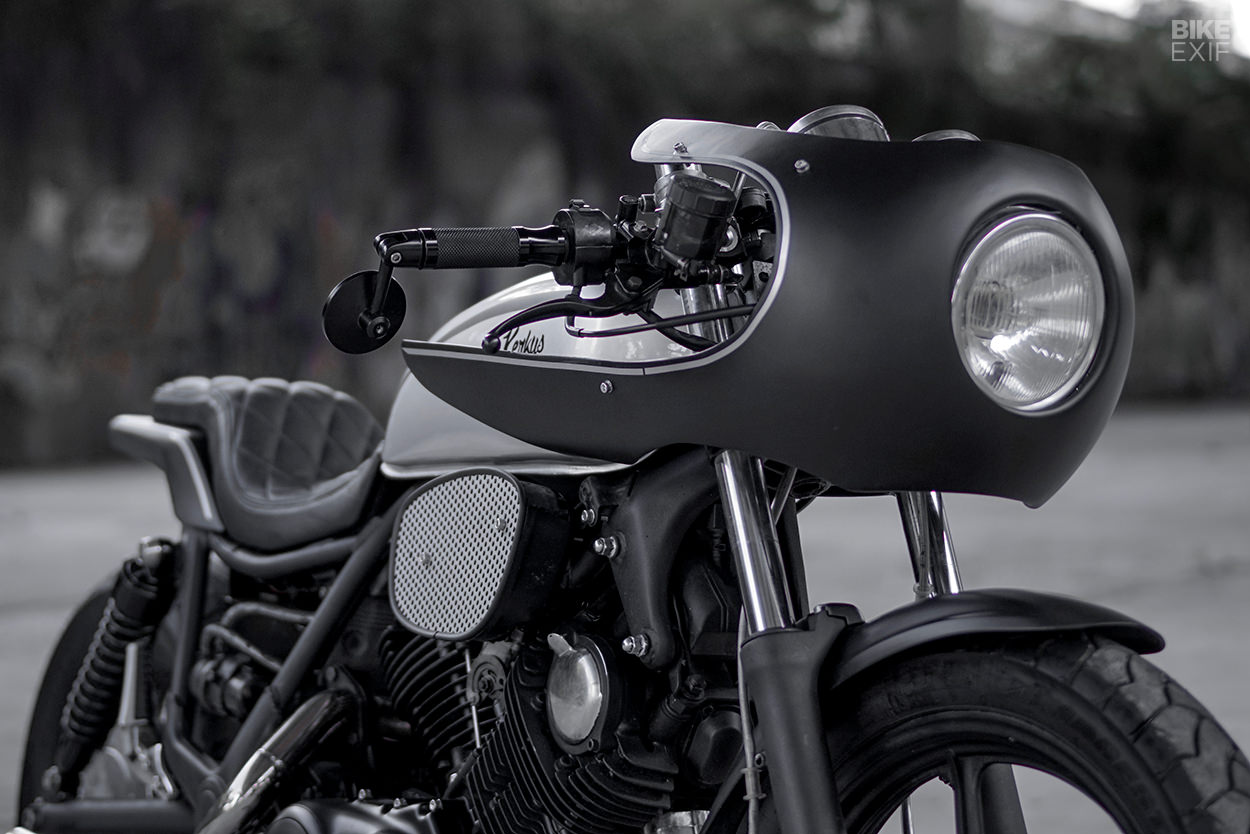 The bars have gone from high to low, with adjustable clipons so that the owner can change the angle to suit his wrists. Kerkus have dressed them with Rizoma grips and bar end mirrors, plus brake and clutch levers from a local Malaysian brand.

In Malaysia, the XV1100 was delivered with alloy wheels, rather than the spoked wheels used in many other markets. It suits the look of this machine, and there’s new Bridgestone rubber all round—a Battle Wing at the front, and an Exedra Max at the back. 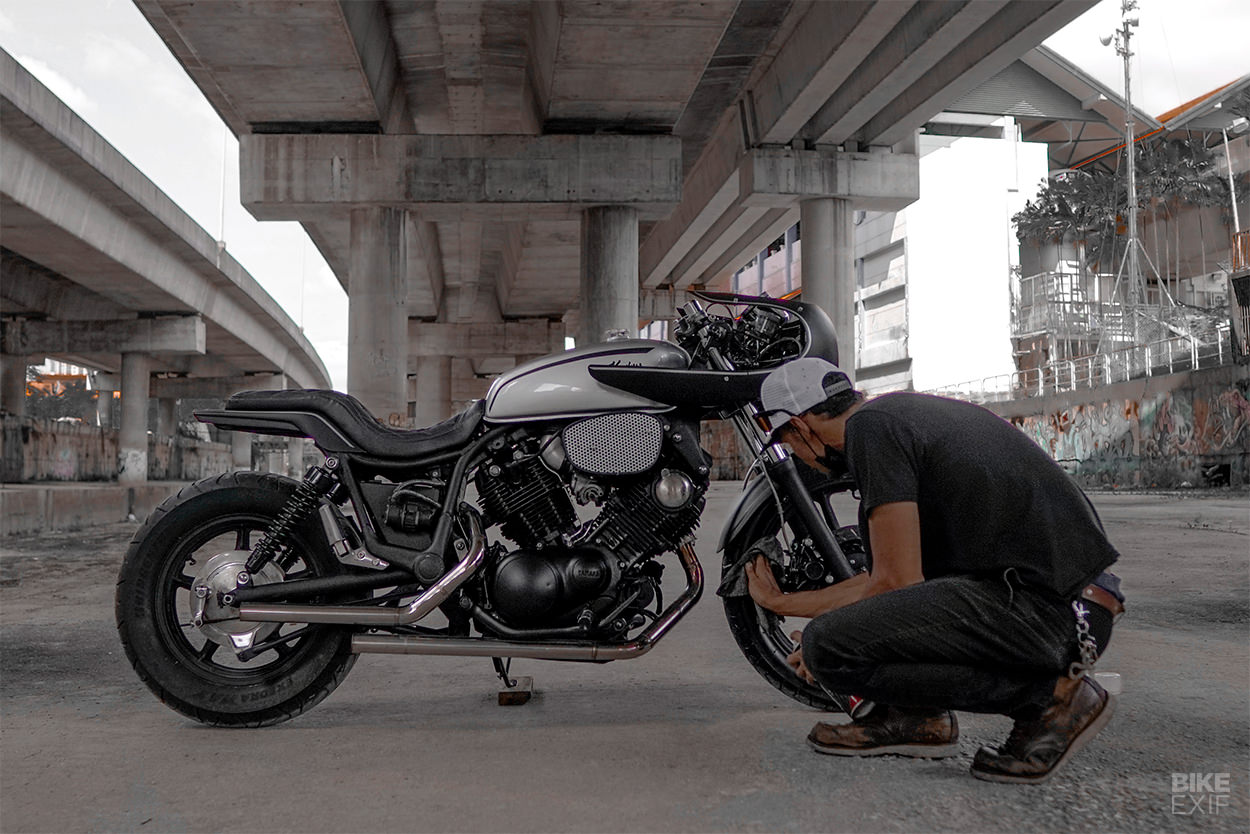 Kerkus finish most of their customs in black and silver, and the signature color works well here—especially on the engine, where the raw metal has been treated to a classy satin black finish, and on the wheels.

It’s not your typical Virago custom and hardly a conventional cafe racer style, but we reckon this Yammie is going to get some serious mileage. Very tasty work indeed. 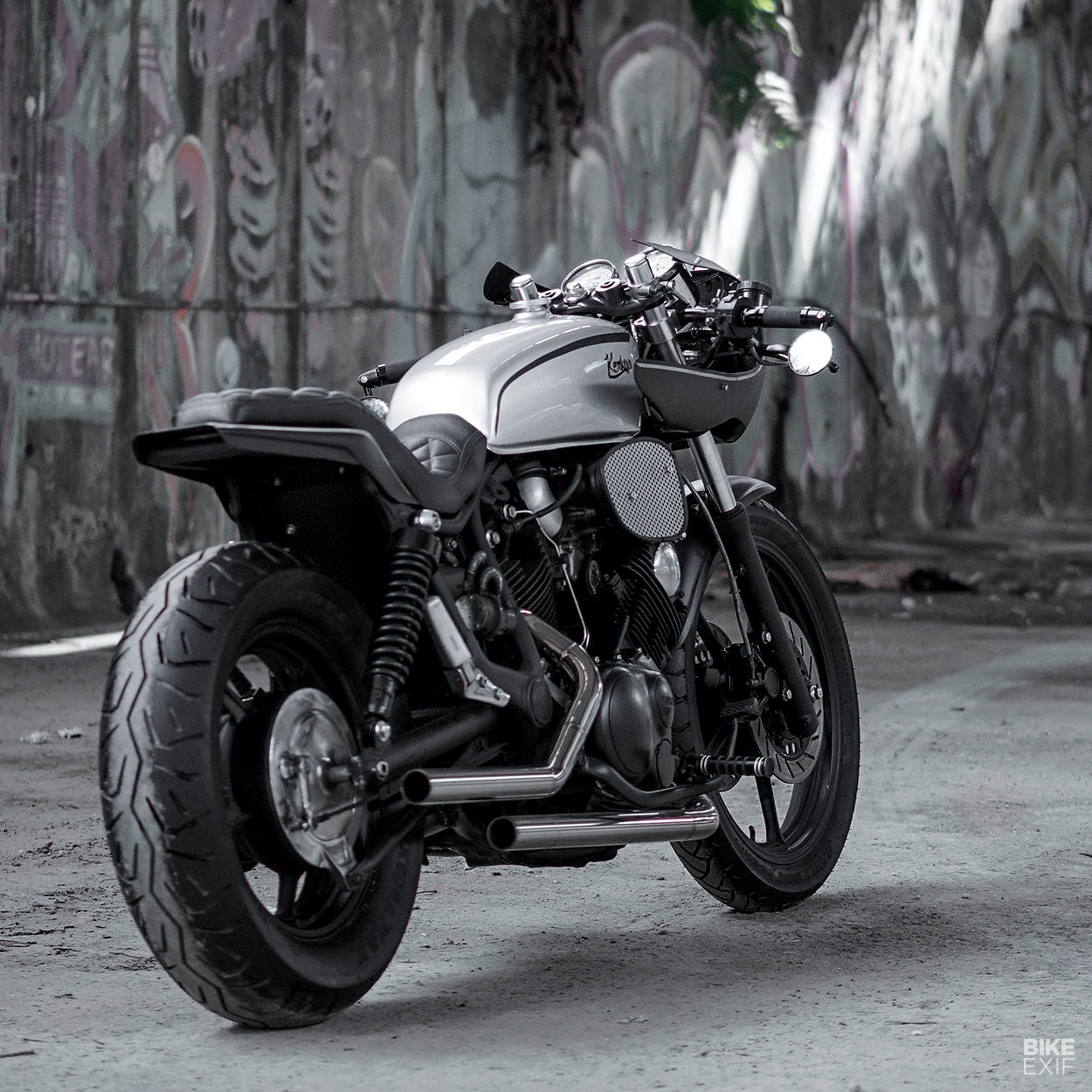