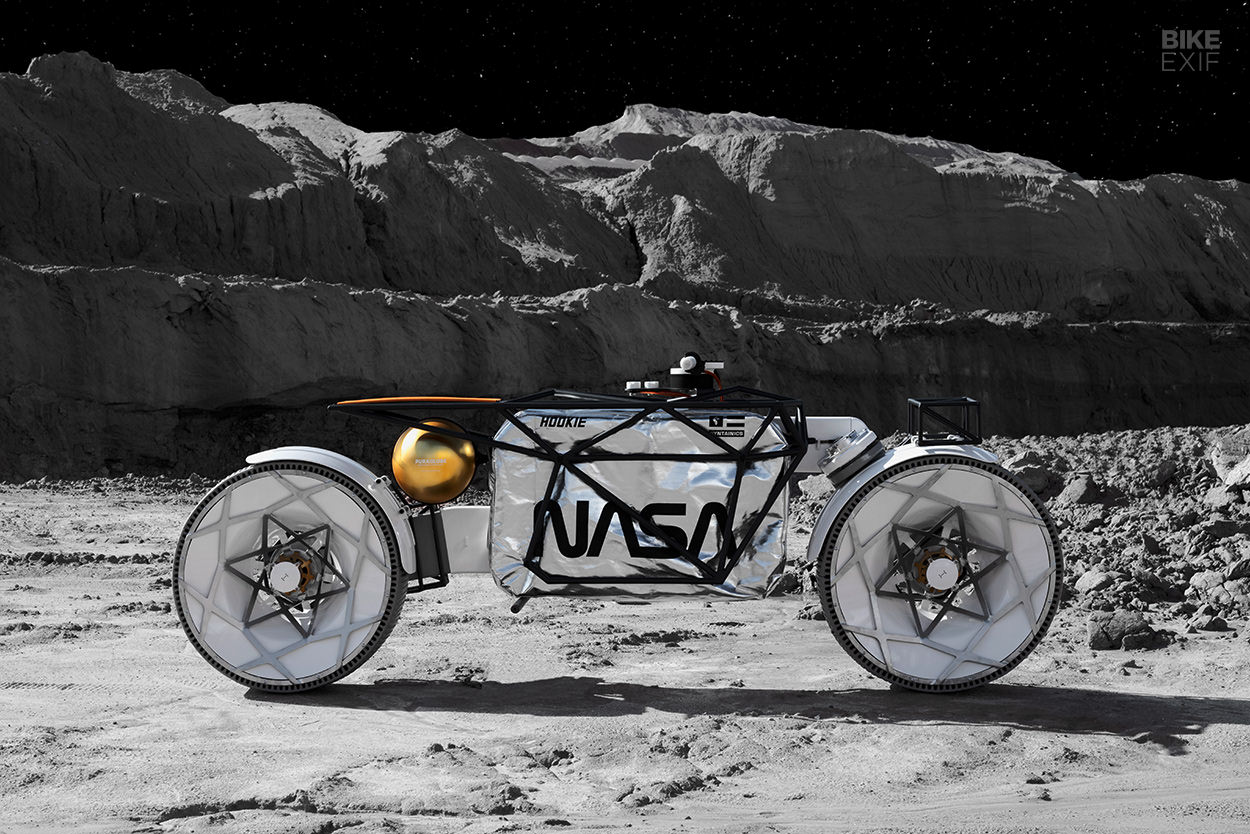 Ever wondered what it would be like to ride a motorcycle on the moon? Meet the Tardigrade—a conceptual electric lunar vehicle, named after the microscopic creatures that can survive in the vacuum of space. Brought to life by Hookie Co. around a Cake drivetrain, it was conceived in Moscow, built in Dresden, and will soon be on display at the Petersen Museum in Los Angeles.

How did the stars align for this otherworldly project to begin? 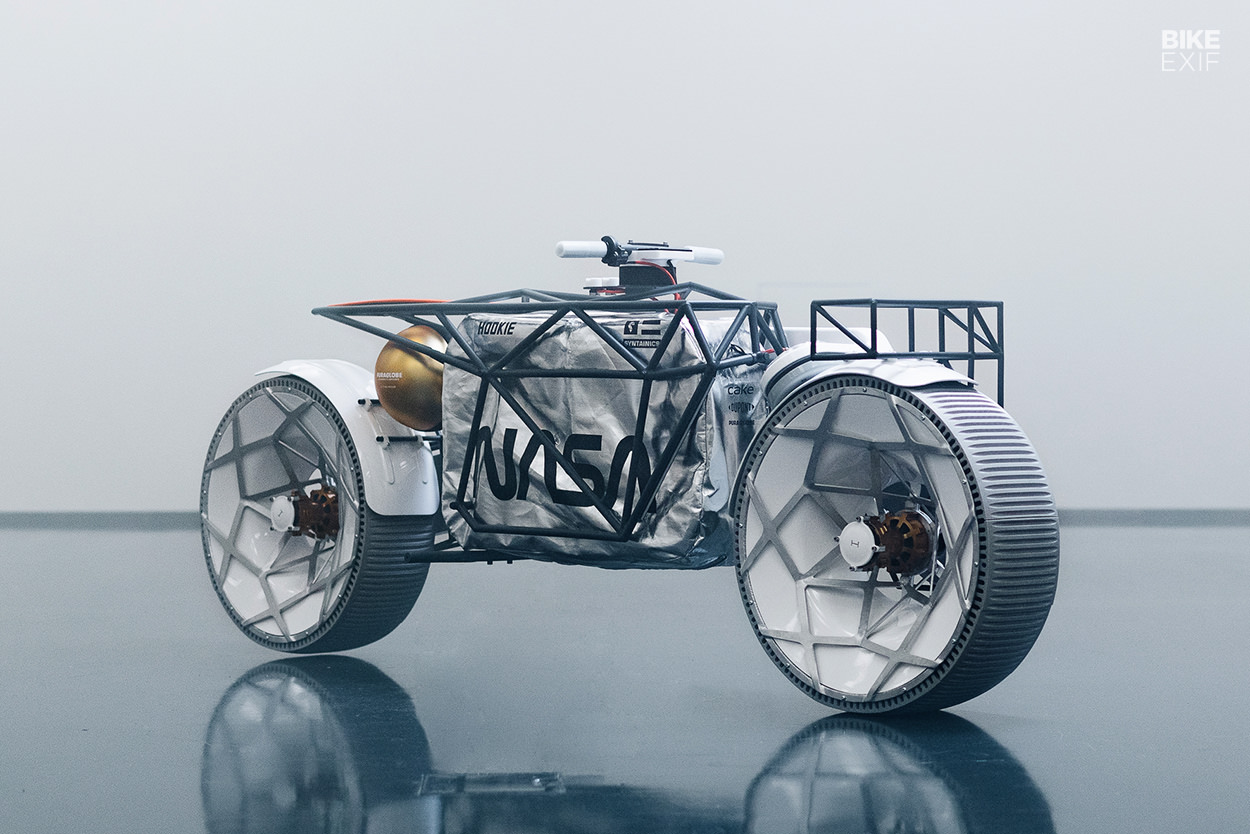 “I saw Andrew’s concept sketch and was hooked immediately,” Müller says. “After some calls we got his approval to build this amazing machine. Andrew’s renderings weren’t detailed and true to scale, so the design process began using Autodesk Fusion 360, and we engineered the whole Tardigrade from scratch.” 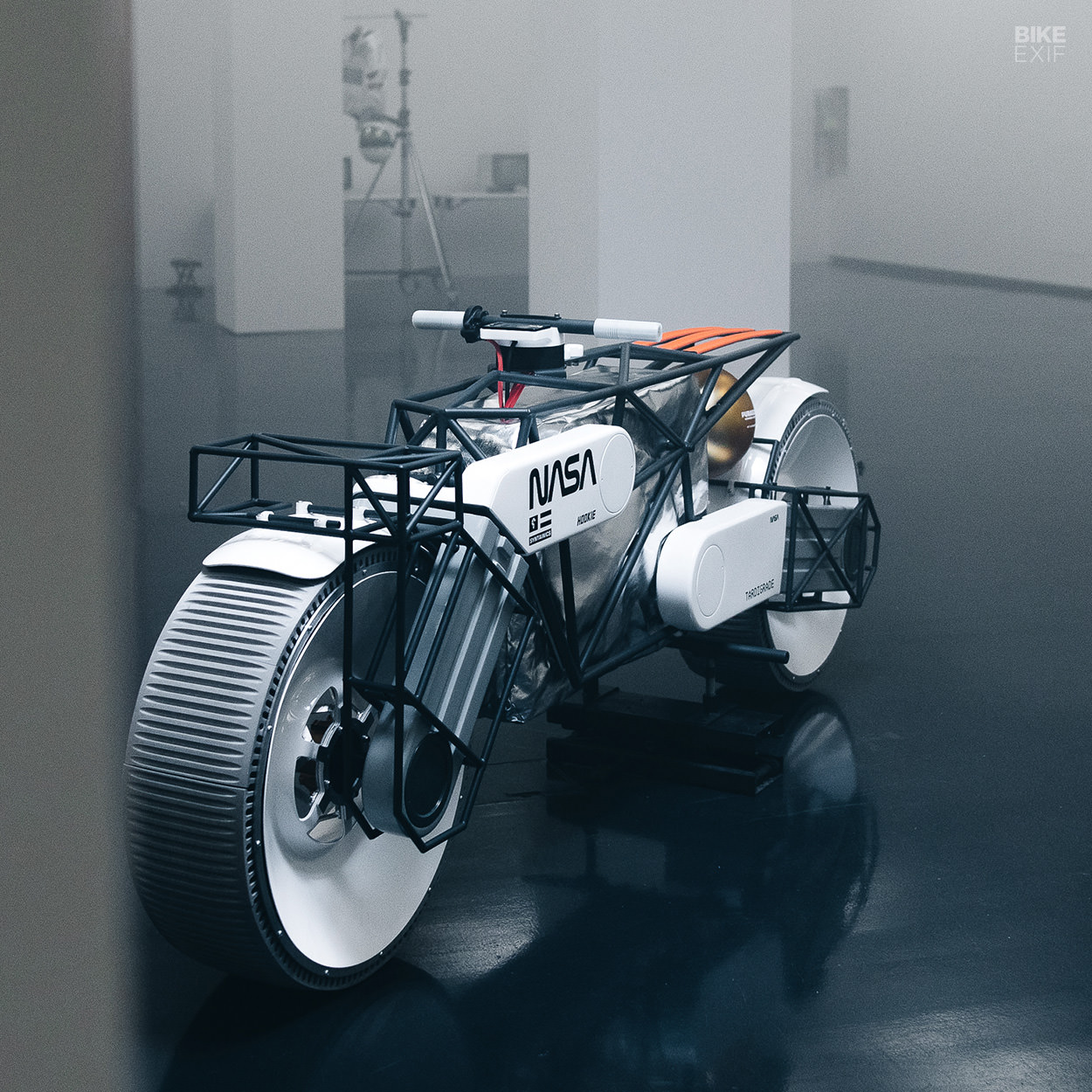 The digital engineering alone took almost six months; Hookie reworked, rethought, and developed every part on the bike from the ground up. It was the German company’s first project where they designed everything in-house. Overall, it took Hookie nine months from a sketch to the finished bike, underwritten with financial support from Puraglobe Syntainics.

Müller and his team partnered with the Swedish electric brand CAKE on a previous project based on the Ösa+ and Ösa Lite, called the Hookie ANT. They decided to keep the partnership flowing by incorporating CAKE’s drivetrain, wiring loop, battery, and two hubs for the Tardigrade’s wheels. 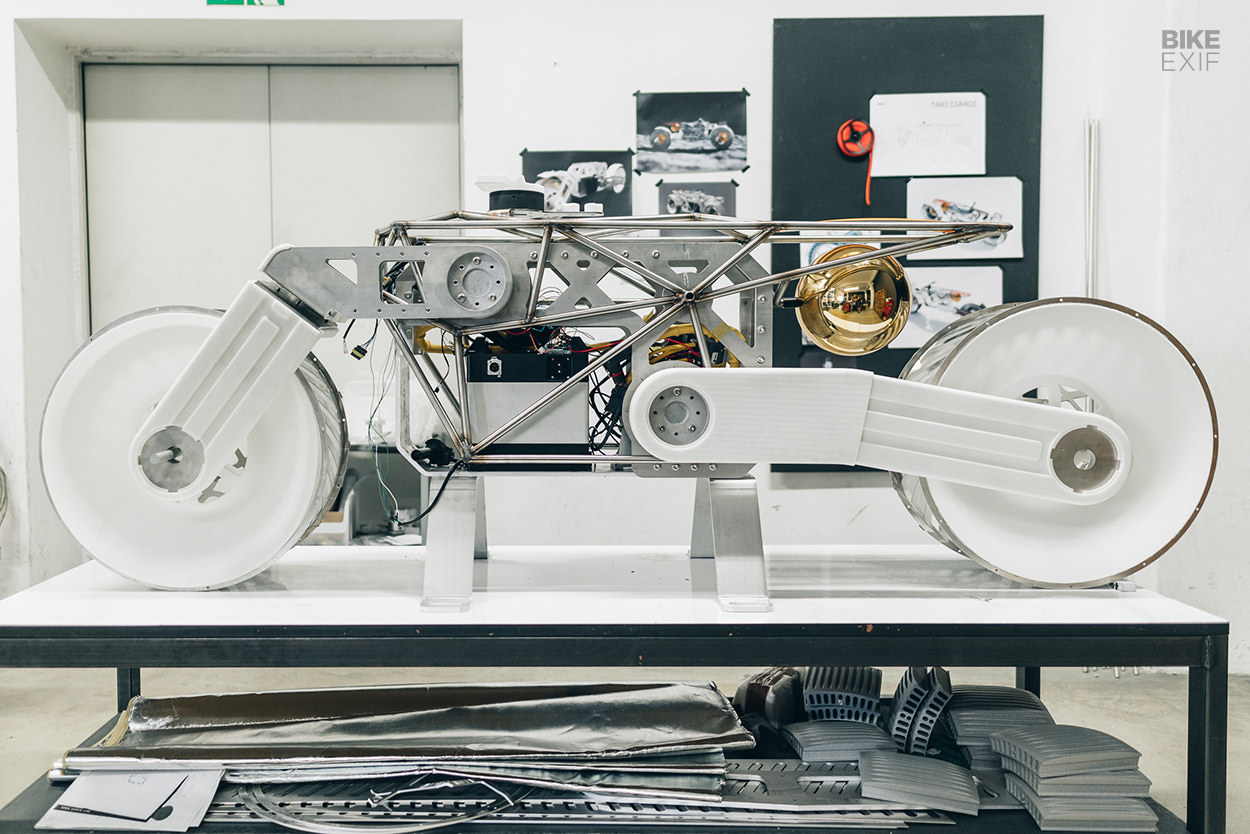 “The main frame, swingarm and fork are made out of 10-millimeter laser-cut aluminum, which we produced near our workshop,” Müller explains. “I fabricated the exoskeleton, axles and sprockets myself. Sometimes I got help from a good friend who runs a custom shop near Munich. We used only aluminum and stainless steel.” 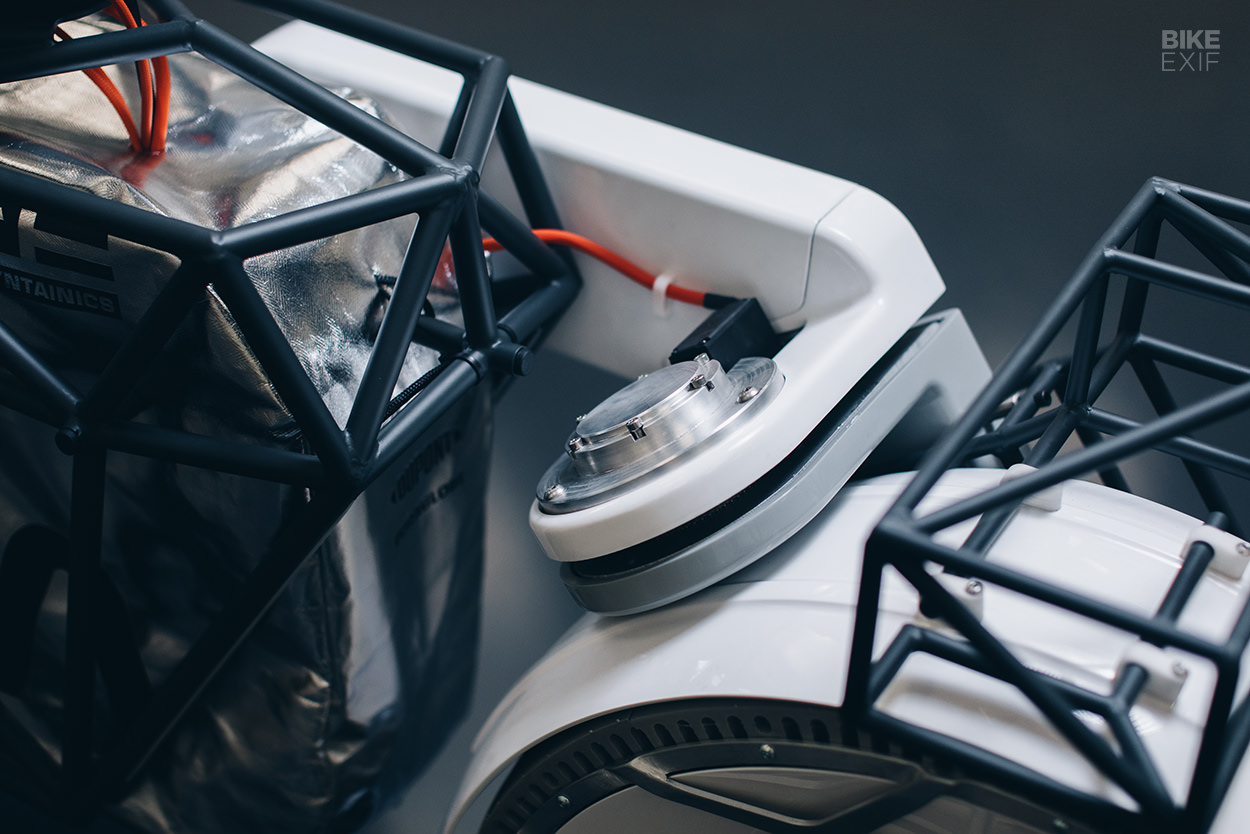 All body parts, like the handlebar mounting unit and the wheel caps, were 3D printed. Hookie chose a light, strong, and flexible plastic, which allowed them to print really big parts. Smaller parts were fabricated with laser sintering, using white nylon plastic.

For the wheels, Hookie first determined the Tardigrade’s size, then modified the wheel design to get a balanced look. They couldn’t find any existing wheels in the size or weight they envisioned, so after some consulting with his industrial designer, Müller decided to fabricate 3D wheels from scratch. 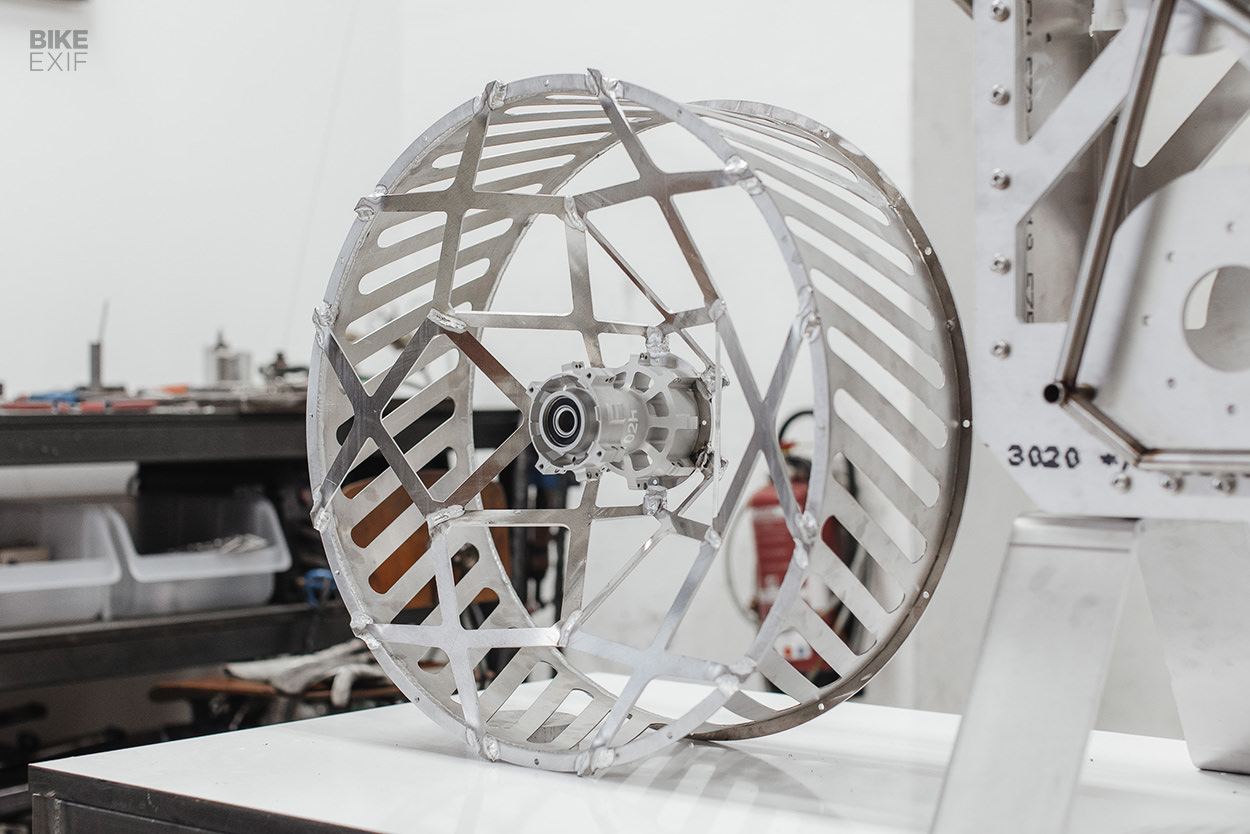 “Every wheel was made out of aluminum and tacked in a custom-wheel-build jig,” he explains.

“The two CAKE hub flanges are five millimeters thick, the wheel bed is two millimeters thick and strong, with five-millimeter-thick spokes welded to a five-millimeter-thick plate. We did some digital material tests and it worked well; the finished product is unique, but the wheels are strong enough to support the 140-kilogram Tardigrade. The wheels are one of my favorite parts on this bike.” 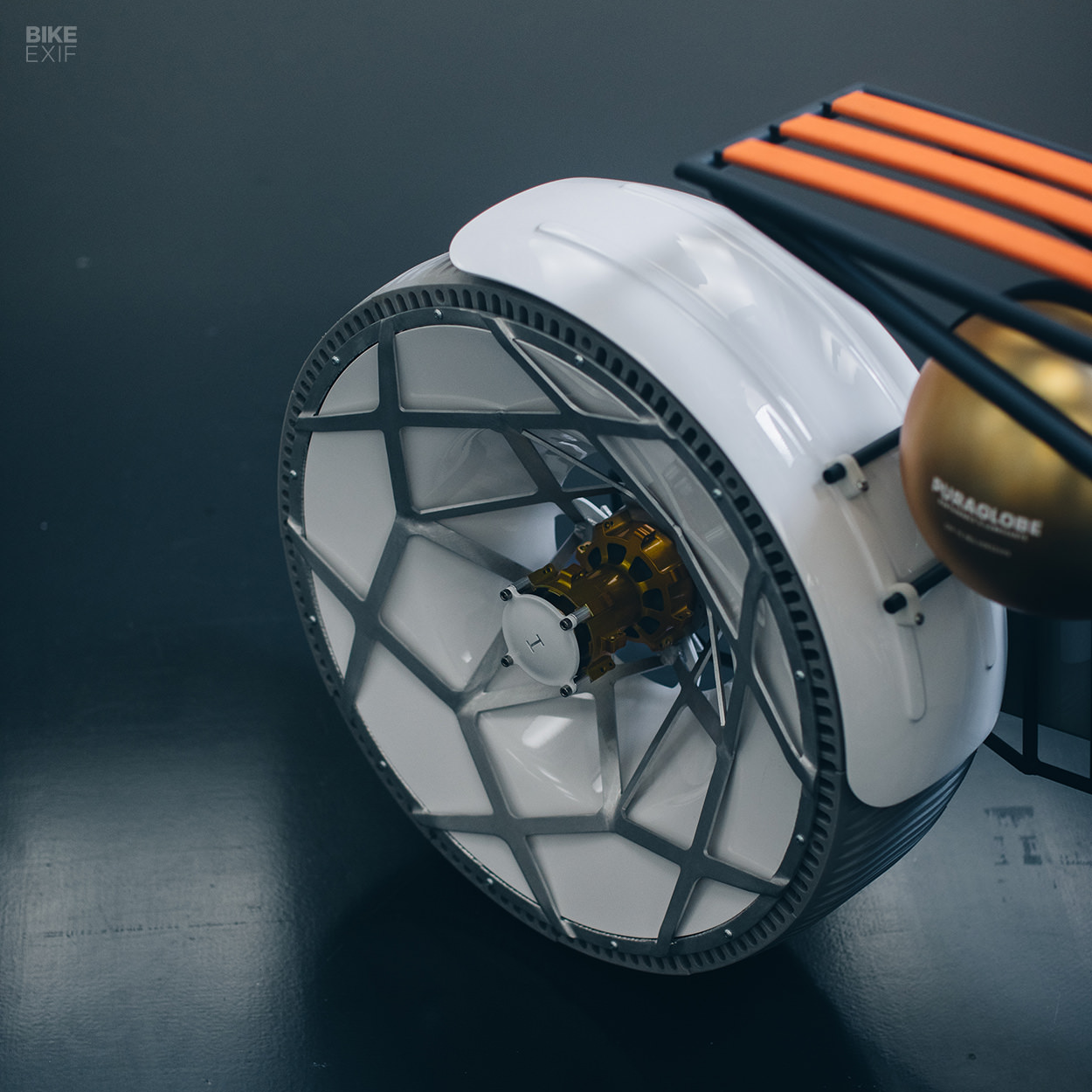 The tires were another challenge altogether: “We spoke with two companies about creating big thermoplastic polyurethane prints,” Müller says. “Everyone liked the idea but nobody wanted to produce it for us.”

After a few conversations with Dr. Yves Bader, DuPont’s Development Manager for Mechanical Protection and Consumer Apparel in Meyrin, Switzerland, Müller decided to produce tire elements on his 3D printer using Kevlar. Twelve parts were needed for one wheel; they tested different thicknesses, patterns, and shapes. 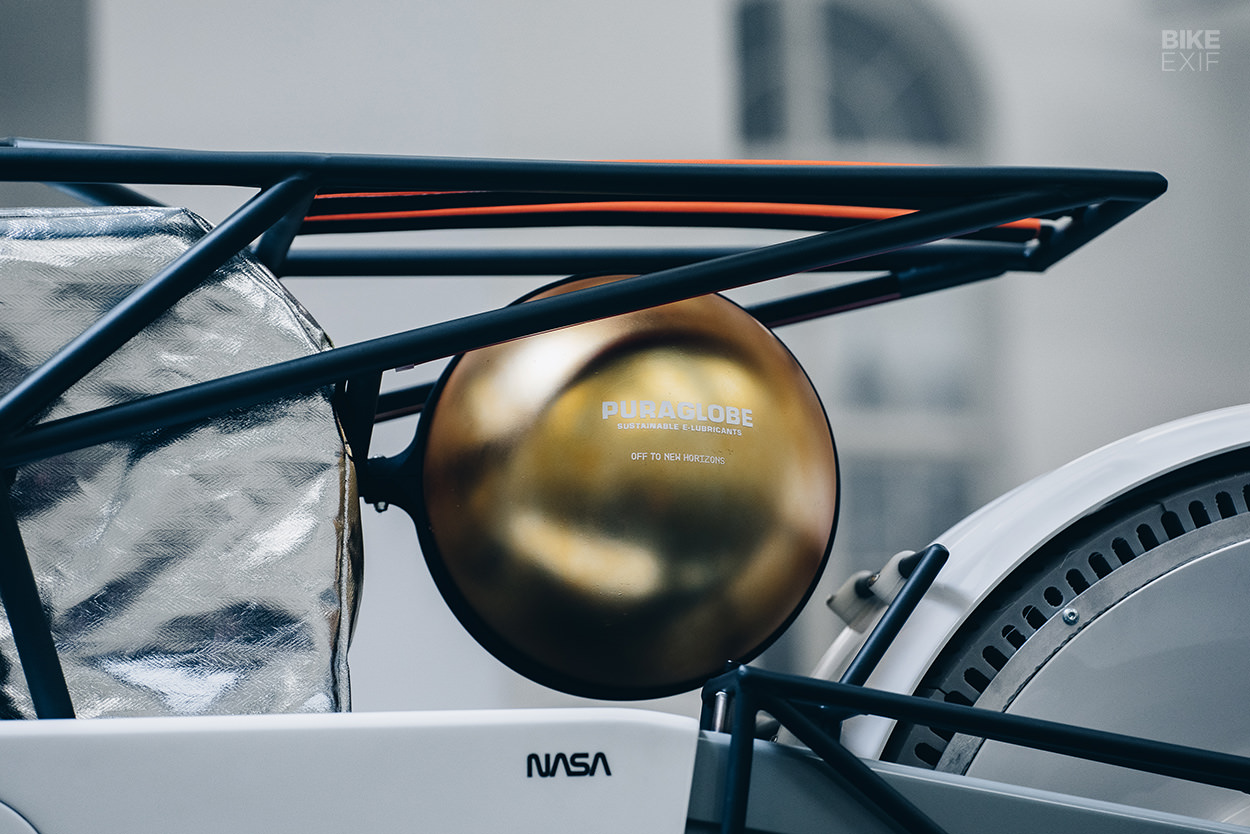 Bader was connected to Hookie by Iron & Air’s editor-in-chief Adam Fitzgerald, who knew the DuPont veteran of 21 years wouldn’t pass up an opportunity and challenge like the Tardigrade. Bader was well-suited to assist with the challenge of creating a protective engine cover for the Tardigrade, opting for a special Kevlar fishbone aluminized fabric.

“The engine needed to be protected, and the solution was a Kevlar fabric which is inherently heat- and flame-resistant, and shields the engine from debris or other mechanical damage,” Bader says. “In order to stick with the original design and also to protect from UV radiation, we decided to use an aluminum coating on top of the Kevlar fabric.” 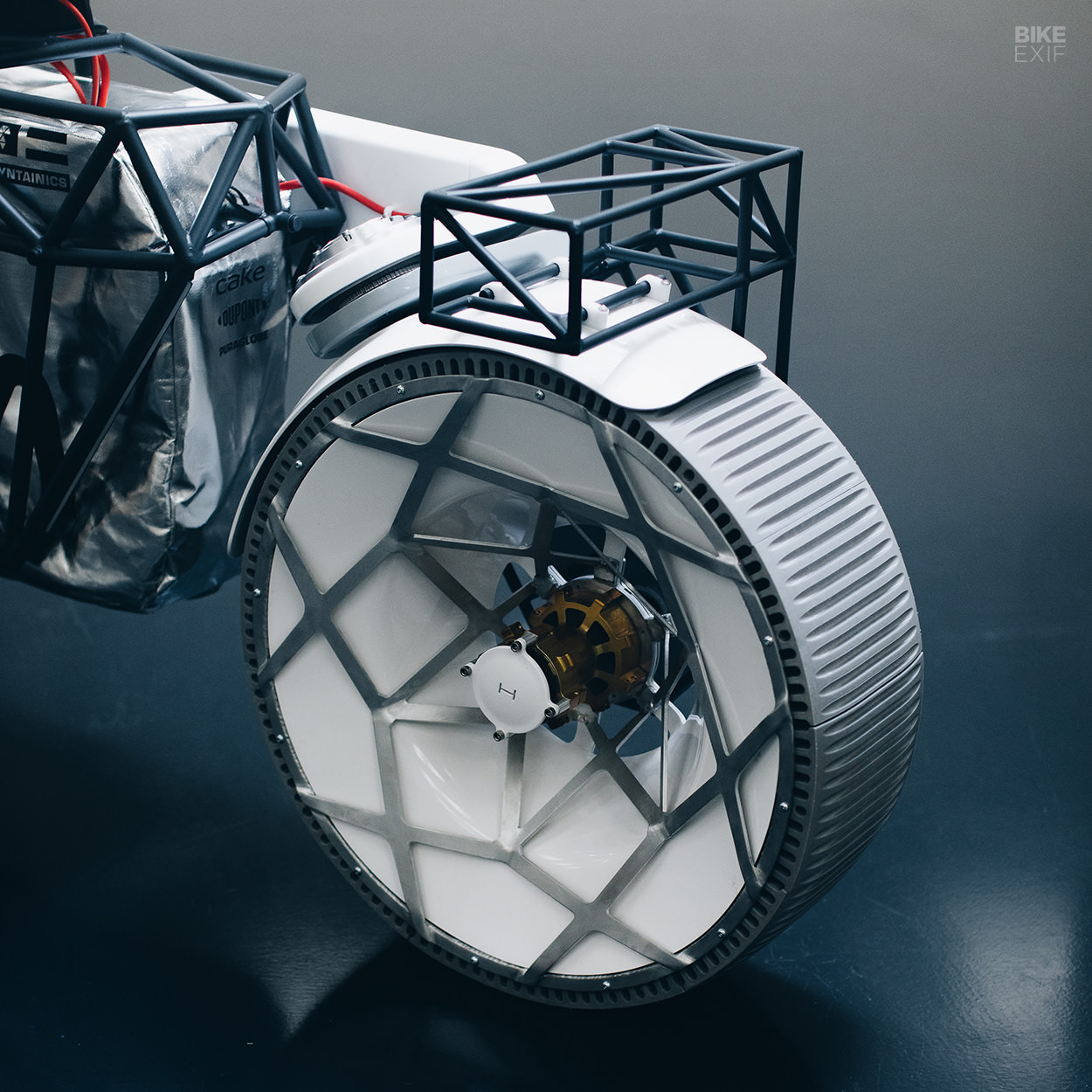 Bader was also involved in developing the tires, and came up with the idea to create a 3D-printed design with parts fixed from the rim side. They connected the properties of an airless tire with the functionality of a caterpillar tread that can be slipped on and off. Unfortunately, time ran out to develop a Kevlar-loaded elastomer for an application on this project.

With Bader’s experience in consumer apparel, including protective motorcycle gear, he also assisted in creating wearables fit for the lunar surface. 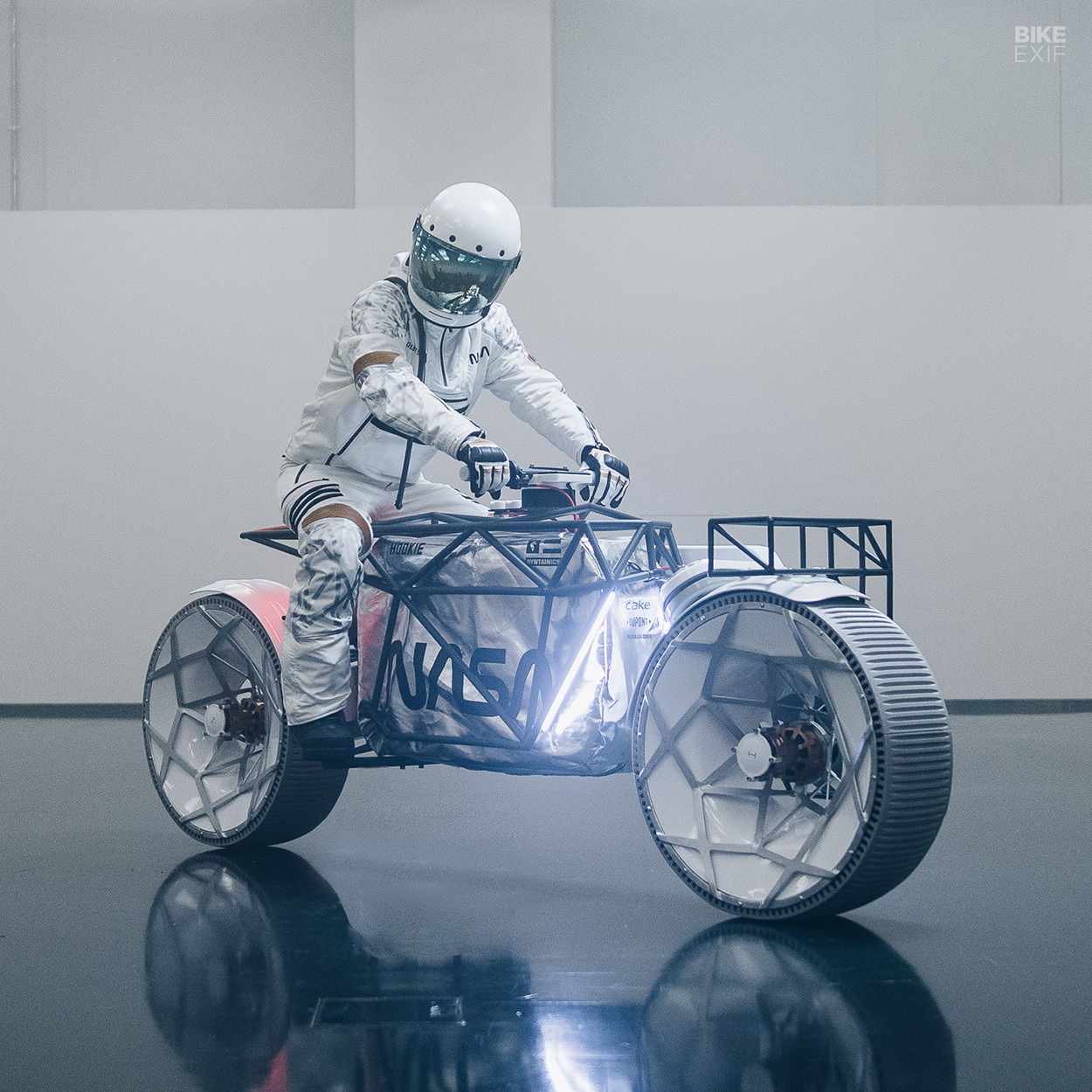 With the wheels and tires produced, Hookie shifted focus to its original radial damper concept, which also didn’t see the light of day.

“It took us too much time to find the right carbon material with the perfect flex to get the damper effect we were seeking,” Müller says. “We tested almost 10 different carbon fibers; we tested rubber and it worked well, but the bike was too heavy for either. We’ll rethink this suspension concept for possible future space projects.” 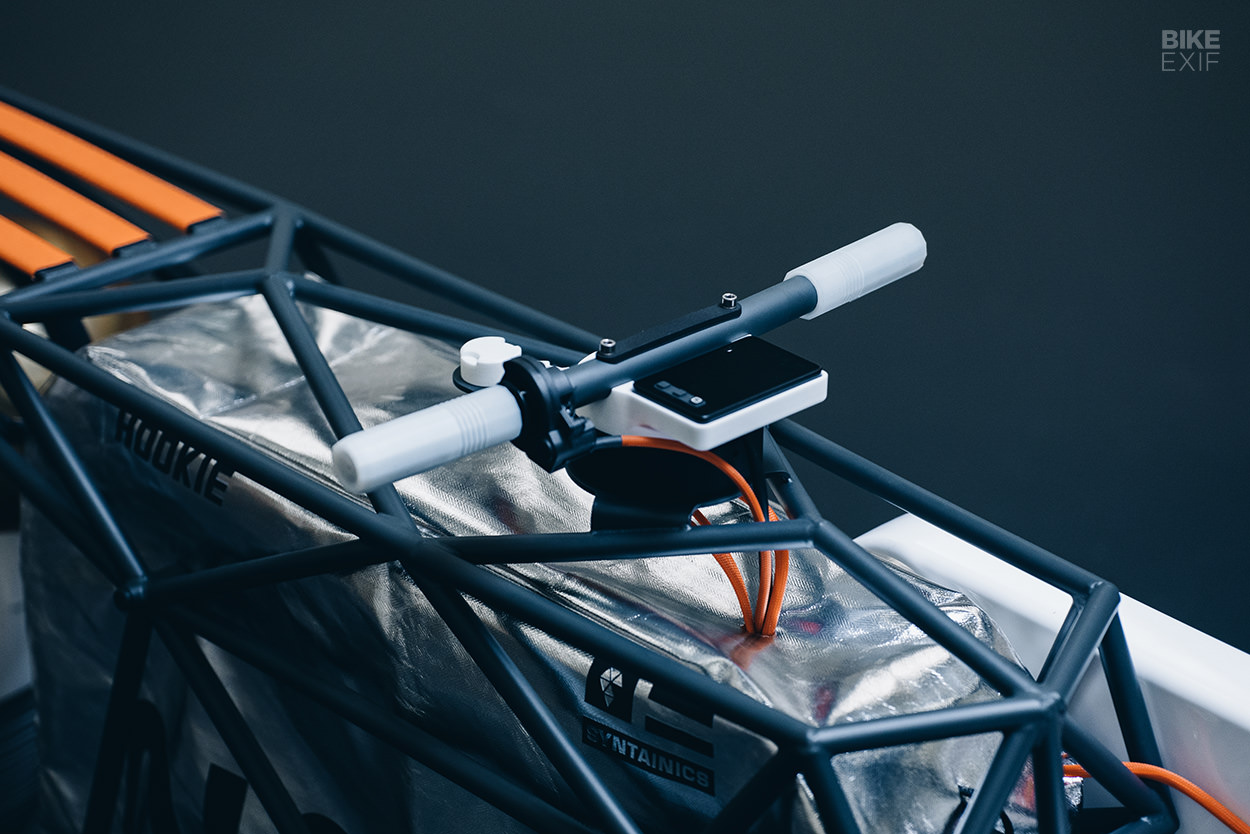 The Tardigrade’s steering is fully electronic and based on a potentiometer at the handlebar. The potentiometer works together with a programmable Arduino computer, running a steering app that Hookie programmed themselves. The Arduino talks to a big servo mounted to the fork upper, with a belt that steers the bottom part of the front suspension setup.

Hookie ran several tests until they landed on a functional solution, but intend to dedicate more time toward fine-tuning the setup for optimal lunar travel conditions. 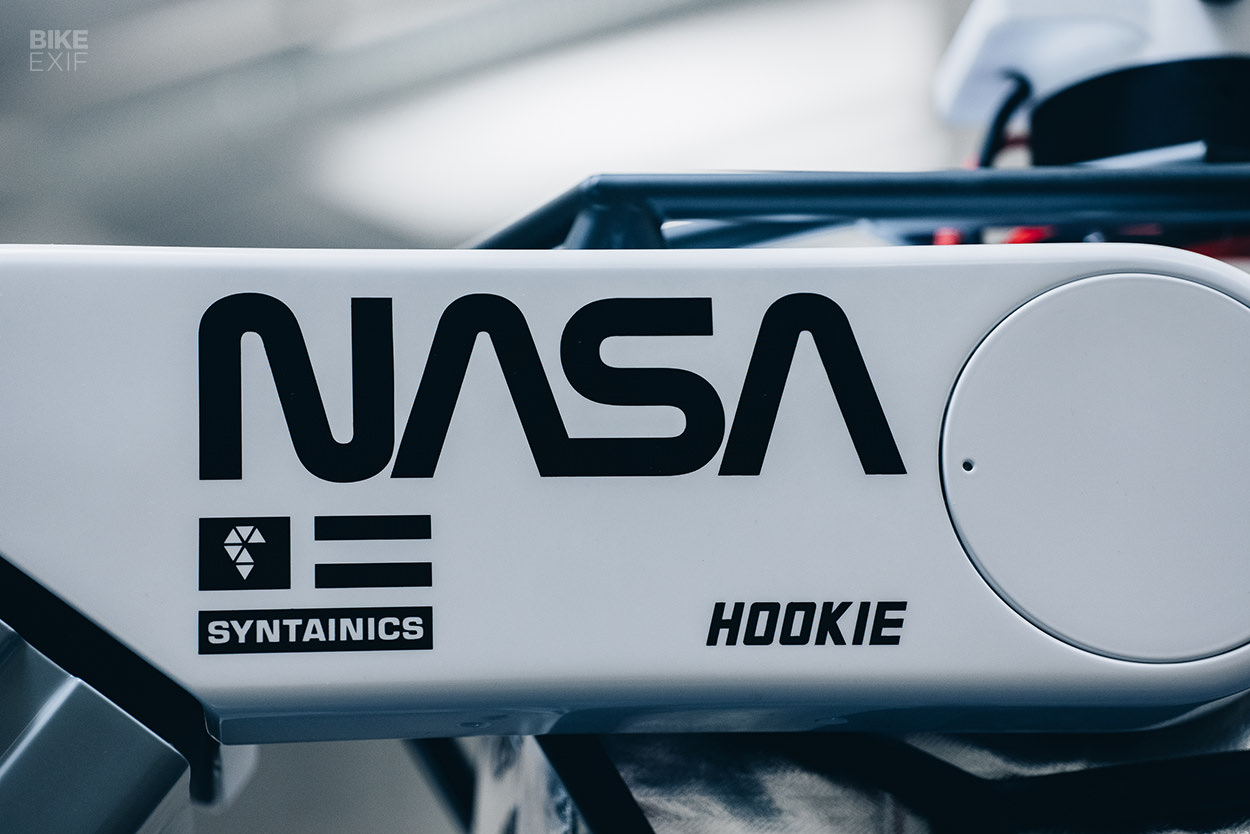 Despite the fully functional setup, Hookie has yet to put the Tardigrade through rigorous human testing yet. “We tested it on the ground without a person on it before shipping it to the Petersen Museum, but the risk was greater than the reward,” Müller says. “The first real test drive will happen when the bike returns to Germany.”

As a parting question, I asked Müller if NASA would ever conceivably organize flat track racing on the moon.

“The idea to ride a motorcycle in outer space isn’t new!” he laughs. “I think there’s a big potential to get two-wheeled vehicles on the moon or Mars. Motorcycles don’t need a lot of space for transport and they can be disassembled quickly. We can disassemble the whole front end of the Tardigrade in two minutes with only four screws.”

“Regarding flat track racing on the moon, I would prefer some big gaps and jumps more than turning left around an oval. With almost one-sixth of Earth’s gravity, I’d need only a small bump to jump 10 meters—that would be fun! Maybe the Tardigrade inspires space-addicted people and engineers for upcoming lunar missions, and I would be more than happy to be a tiny part of that.”

Hookie Co. | Facebook | Instagram | Tardigrade will soon be on display as part of the ADV:Overland exhibit, curated by Paul d’Orléans, at the Petersen Automotive Museum in Los Angeles, CA. 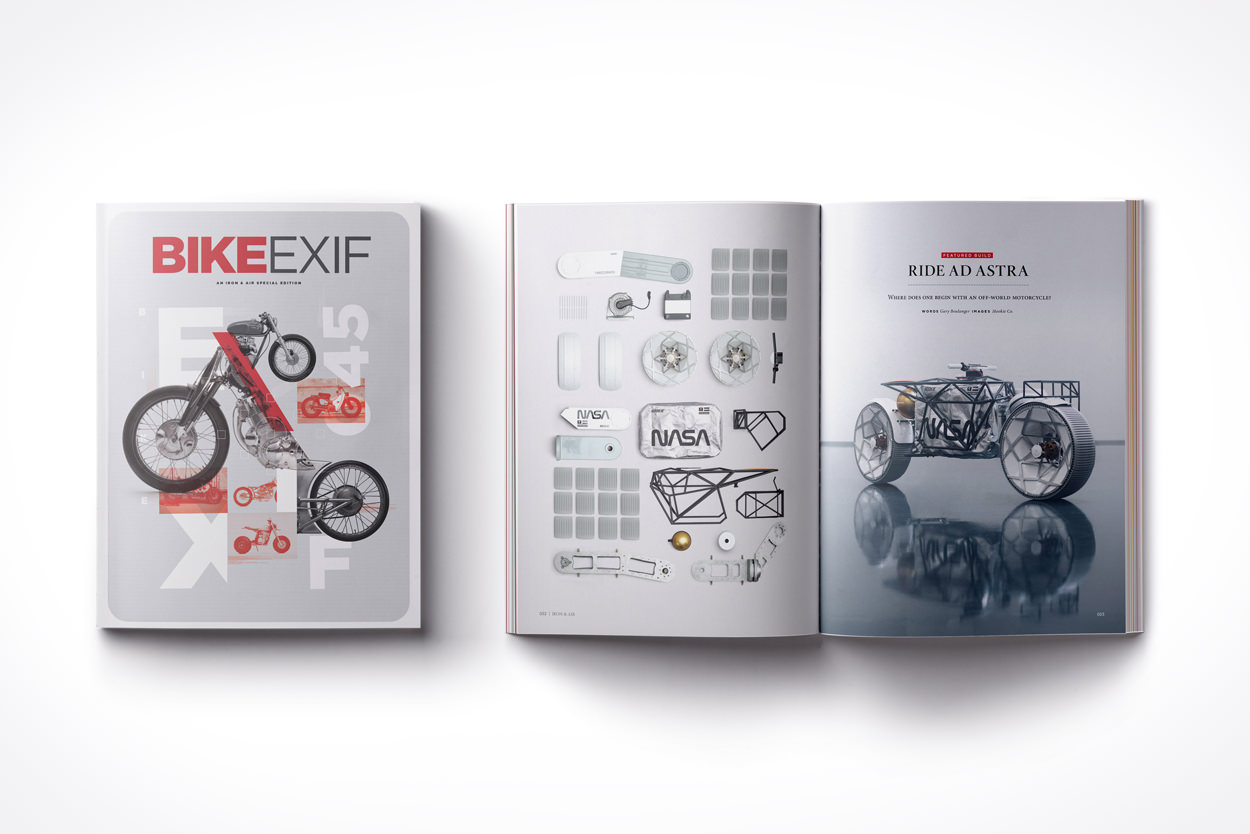 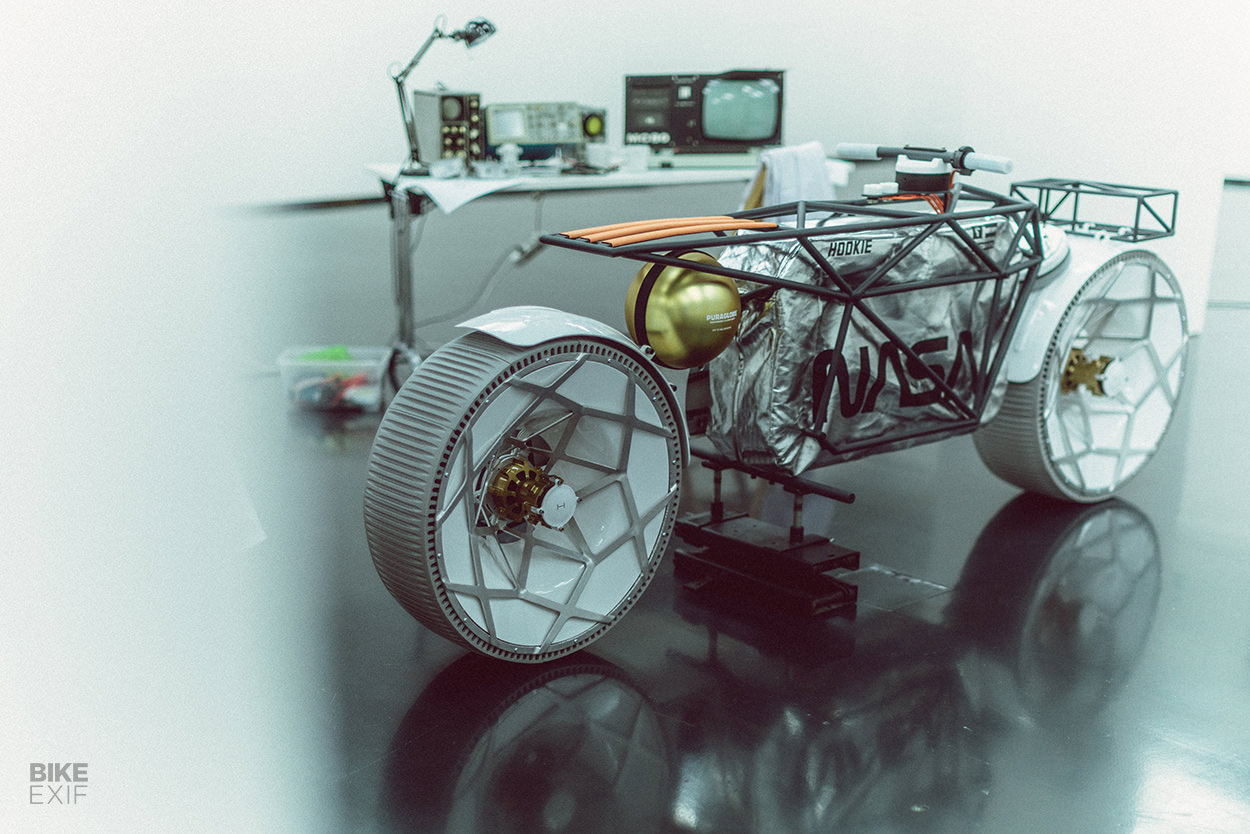