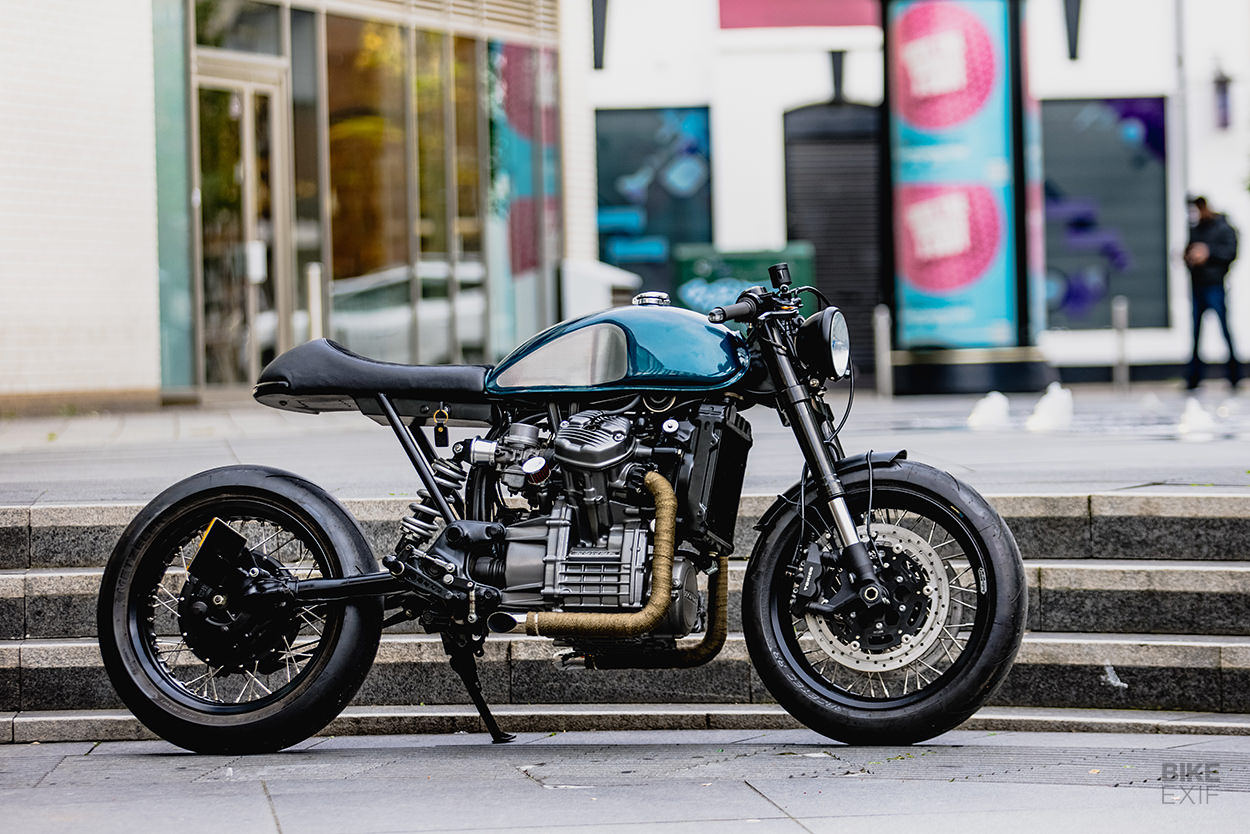 Some motorcycles lend themselves to customization, and need just a few tasteful mods to look great. But the Honda CX500 is not one of them. Sure, there’s potential there—but you have to know how to extract it.

Harry Blaise Fryer has cracked the code. Built with help from London’s Jackson Motorcycles, his CX500 is a textbook example of how to turn Honda’s plastic maggot into a handsome café racer. 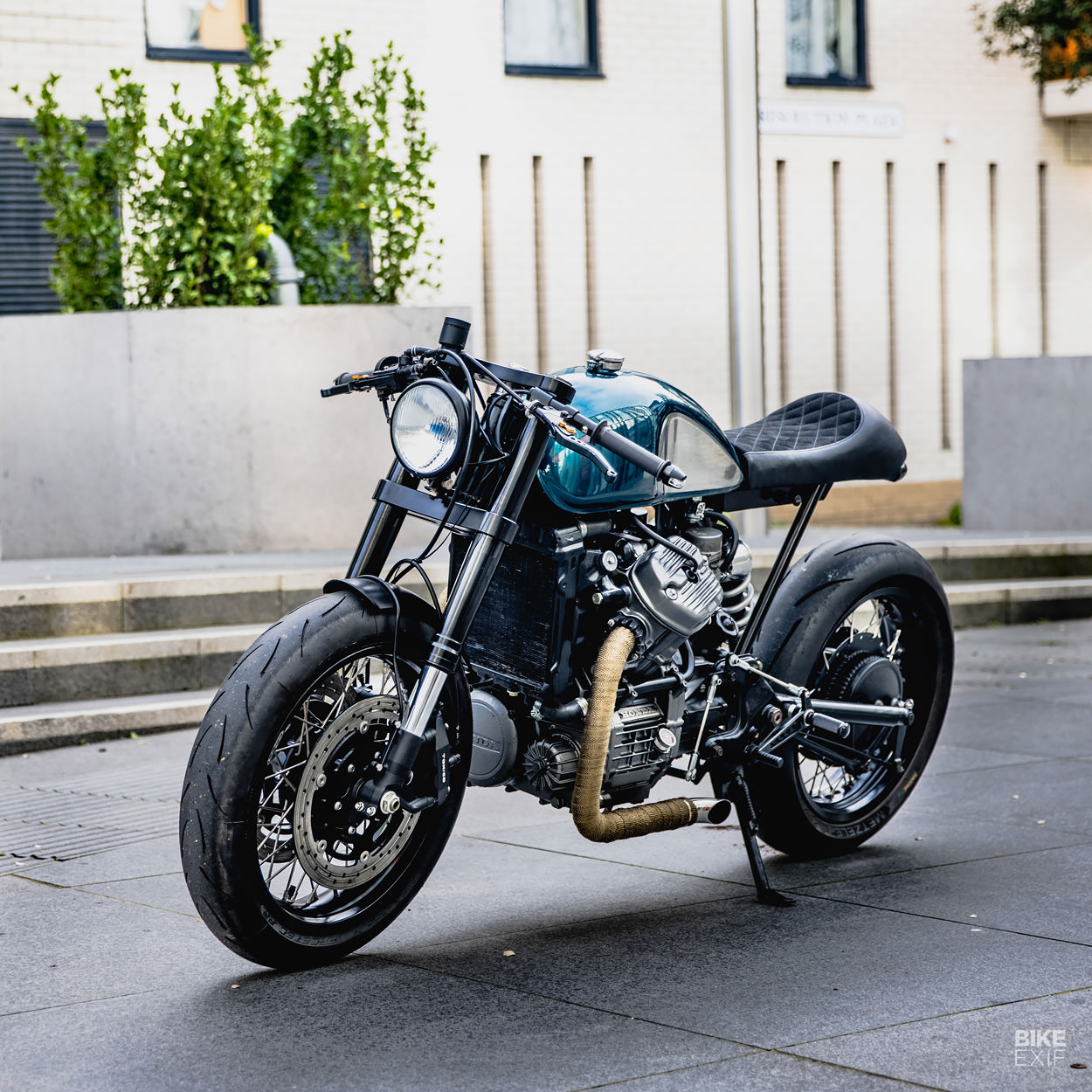 Harry and his brother, Danny, have been obsessed with bikes since childhood. Danny lives in California now—but Harry works at The Bike Shed in London’s artsy Shoreditch district, where he’s surrounded by beautiful machines all day. The brothers had the idea to build a custom Honda after Harry’s 1978 CB550 was stolen.

The first step was to trawl the web for inspiration. “One thing I did notice, is that I hadn’t seen a custom Honda CX500 that I liked,” Harry tells us. “The CX500 is a notoriously ugly bike, and the ergonomics make it hard to make appealing changes.” 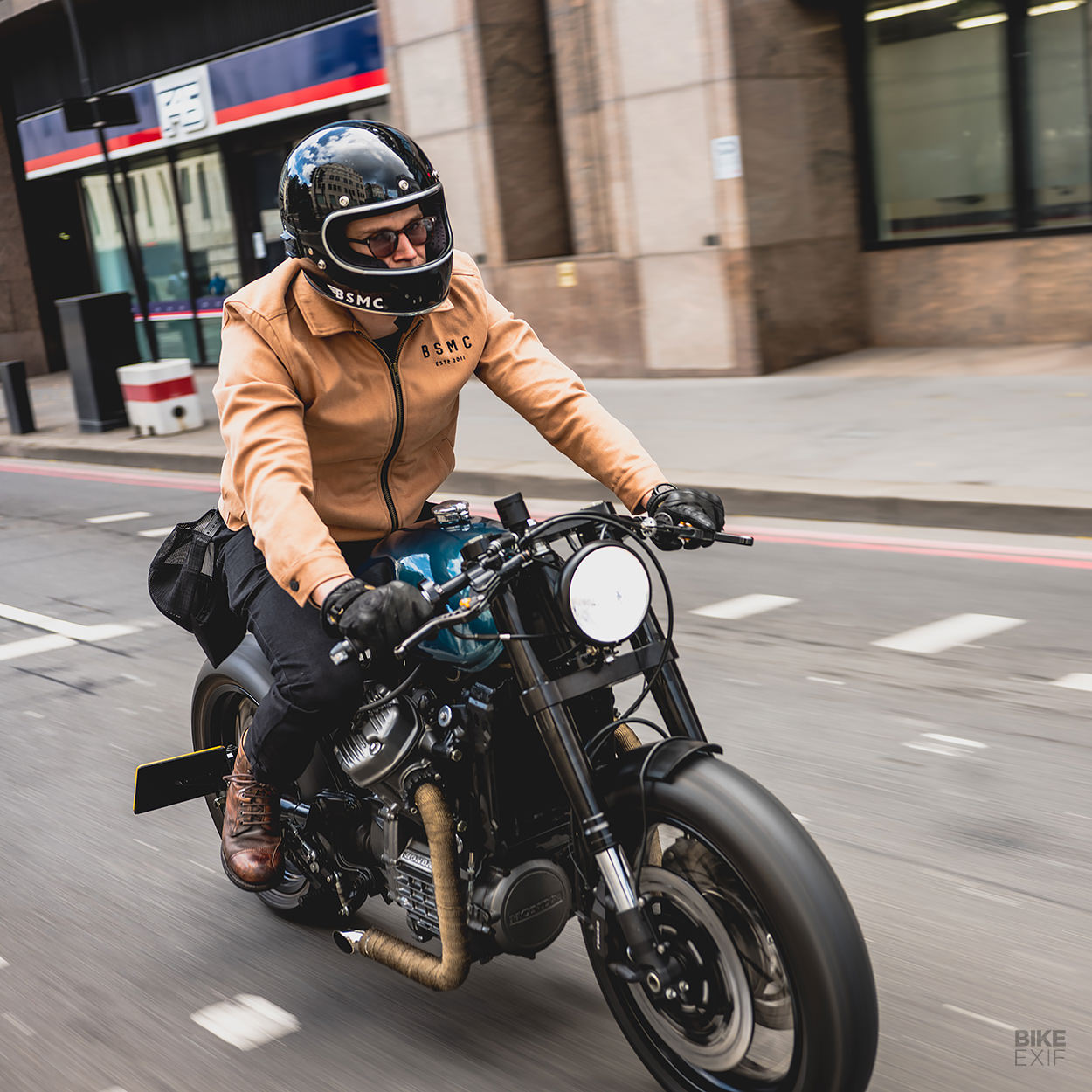 “This became our goal: to take an original CX500 and create something completely unique, that complements the engine the way it should. The bike had to look like it was designed for speed but retain its certain classic qualities.”

With input from Danny, Harry printed out a dozen A4 copies of the side view of a stock CX500, and started sketching. By combining the best features of the best customs they’d seen, and adding their own flavor, they settled on a final design. Then it was time to do the heavy lifting. 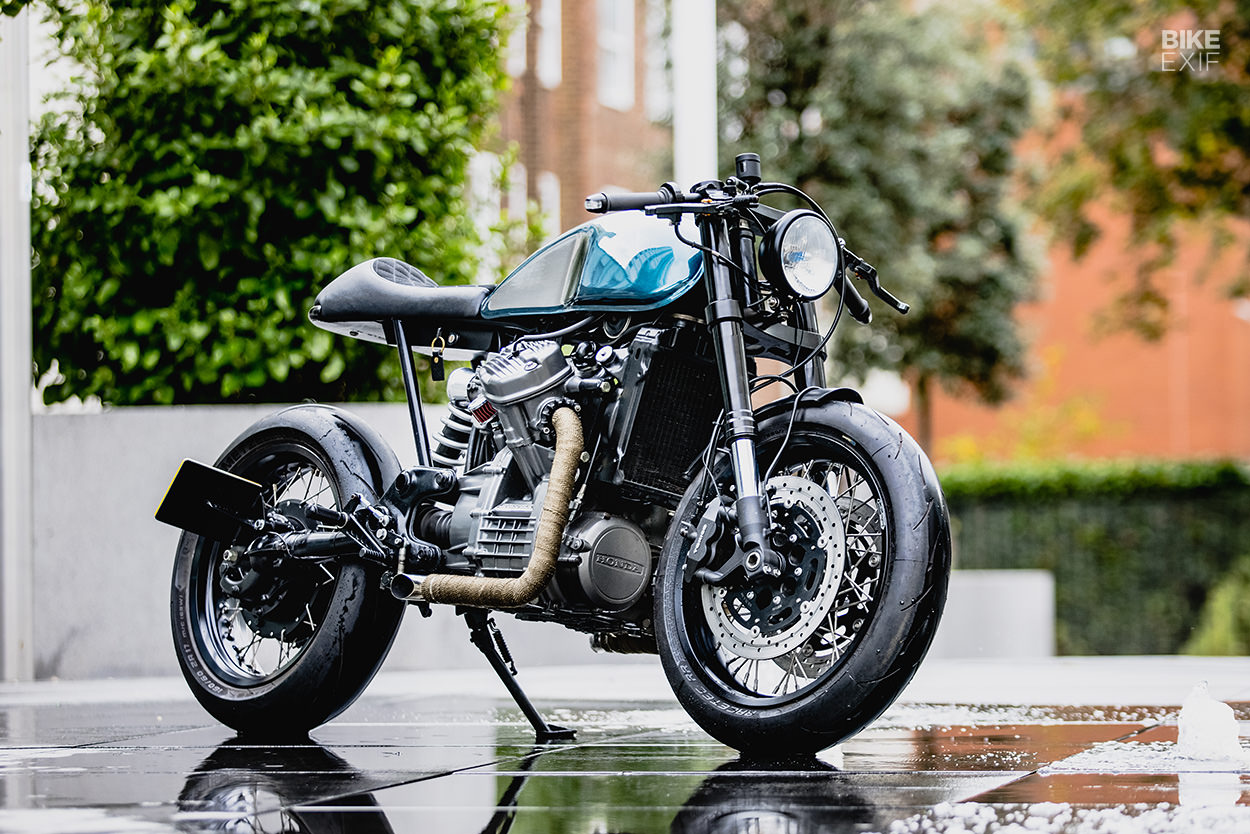 “I had come this far into my engineering-fueled hobby doing everything myself, from designing to fabricating to wrenching,” says Harry. “However my ‘how-to’ YouTube tutorials weren’t going to help me this time.”

“My ambitious idea was going to need some serious handiwork—so I approached Jack from Jackson Motorcycles.” 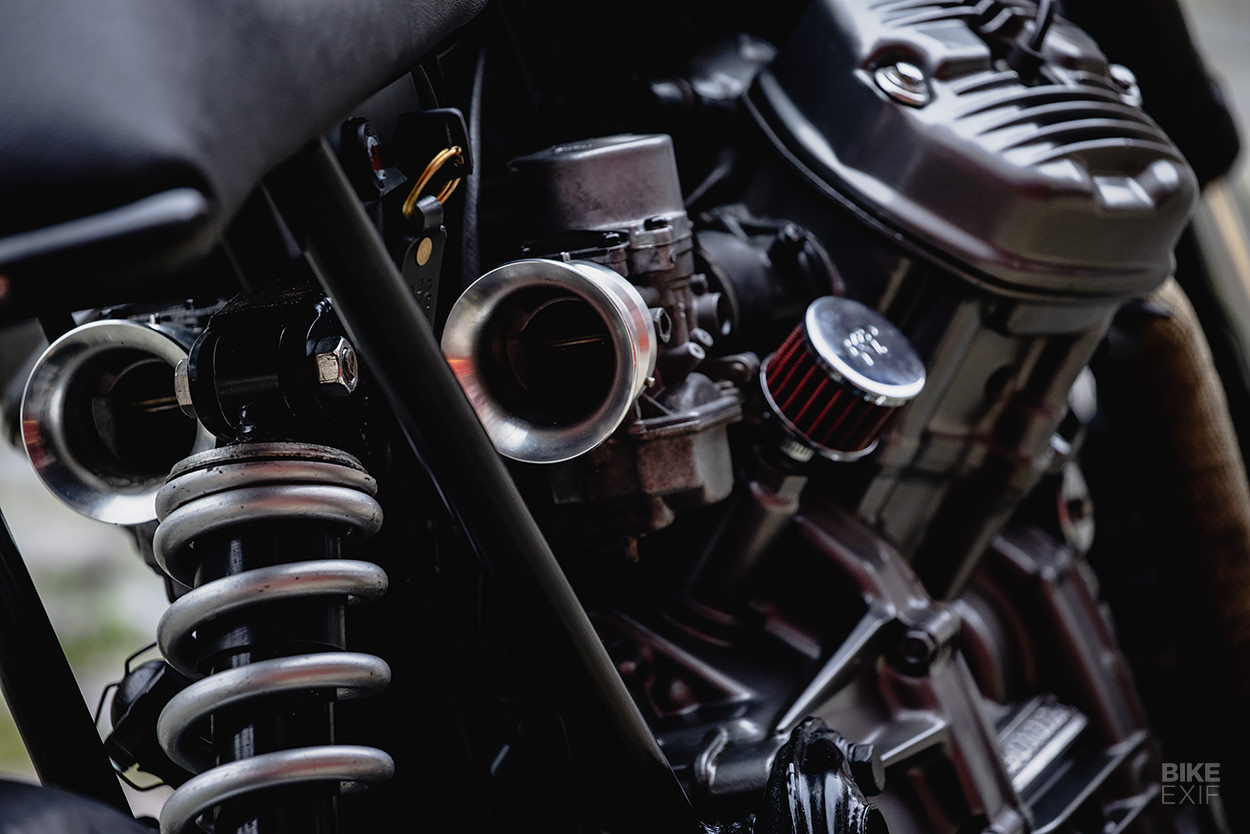 Harry set about finding a suitable donor, and ended up with two identical 1980 CX500s from one owner. Back at Jackson Motorcycles, both bikes were revived and fired up, to figure out which one ran better. The higher mileage donor ended up being the one with better compression, and was promptly stripped down.

“All we kept was the engine, radiator, half a frame, swing arm and shaft drive hub,” says Harry. “The rest was donated to the gods of speed.” 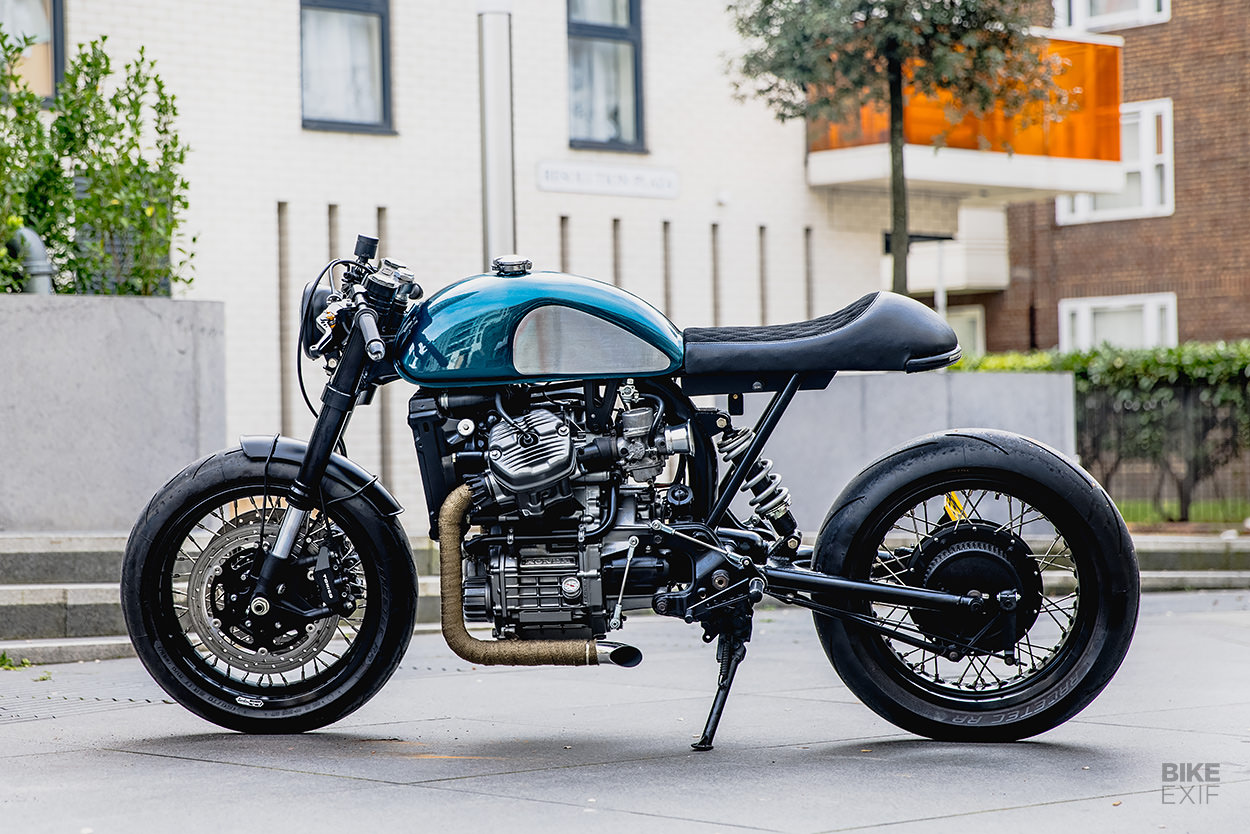 The Honda’s swooping subframe was chopped off, and Jack fabricated a new unit with a flawless bone line and a tidy rear loop. He then shaved the twin shock mounts off the swingarm, and welded in new mounts for a mono-shock system, using the shock from a Yamaha R3.

The front end had a transplant too. Harry took the forks and twin front brakes from a Suzuki GSX-R600, and installed them with a front end conversion kit from Cognito Moto in the US. The setup uses custom yokes and neck bearings, and the brakes have been upgraded with 320 mm discs from a different GSX-R. 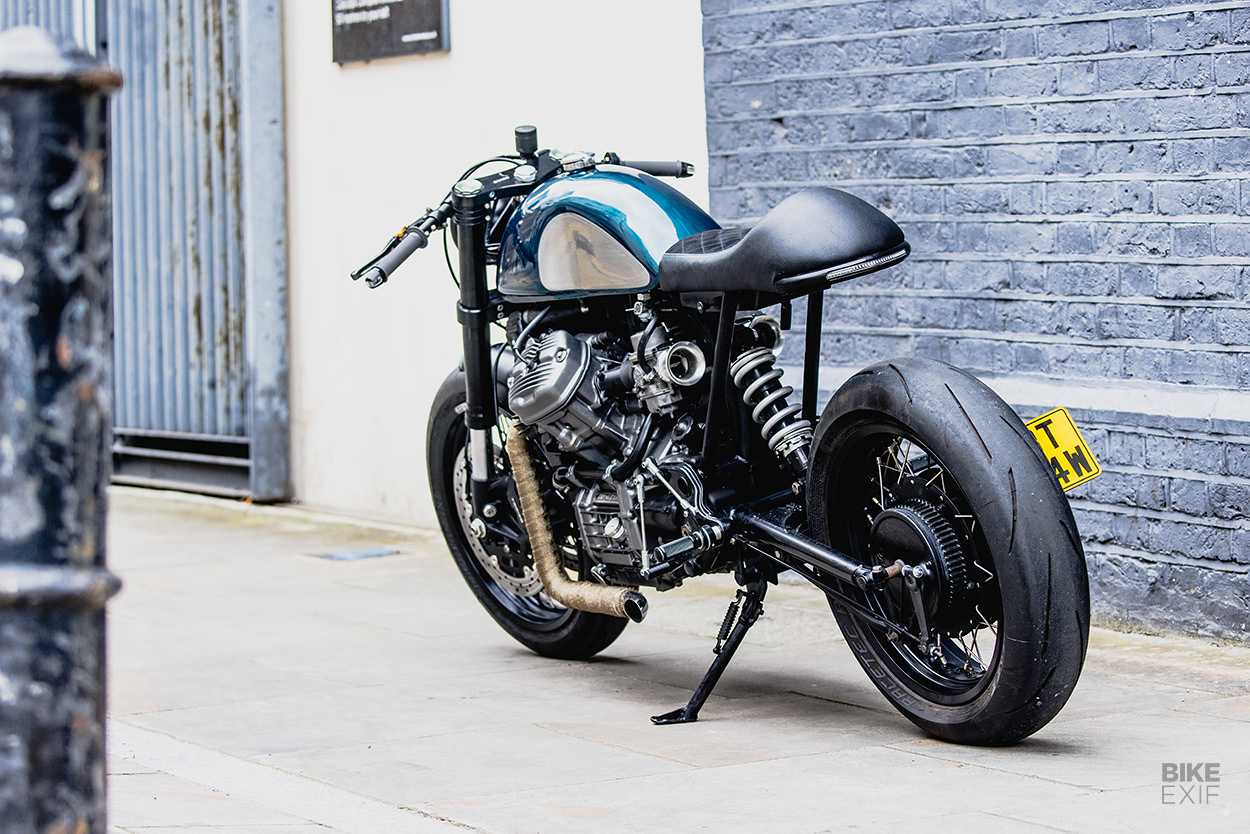 Harry decided to swap the Honda’s original Comstar wheels for something classier, so he had a pair of 16” rims laced up. The rear wheel uses the OEM wheel hub, which was modified by Café Racer Kits in the Isle of Wight with custom flanges. The hoops are wrapped in grippy Metzeler RaceTec RR tires, with a whopping 160-wide unit at the back.

Cramming such a wide tire into the CX meant trimming and re-welding part of the swingarm—which is when Jack realized that its underside was badly corroded. A replacement swingarm was sourced, and that part of the project was rebooted. 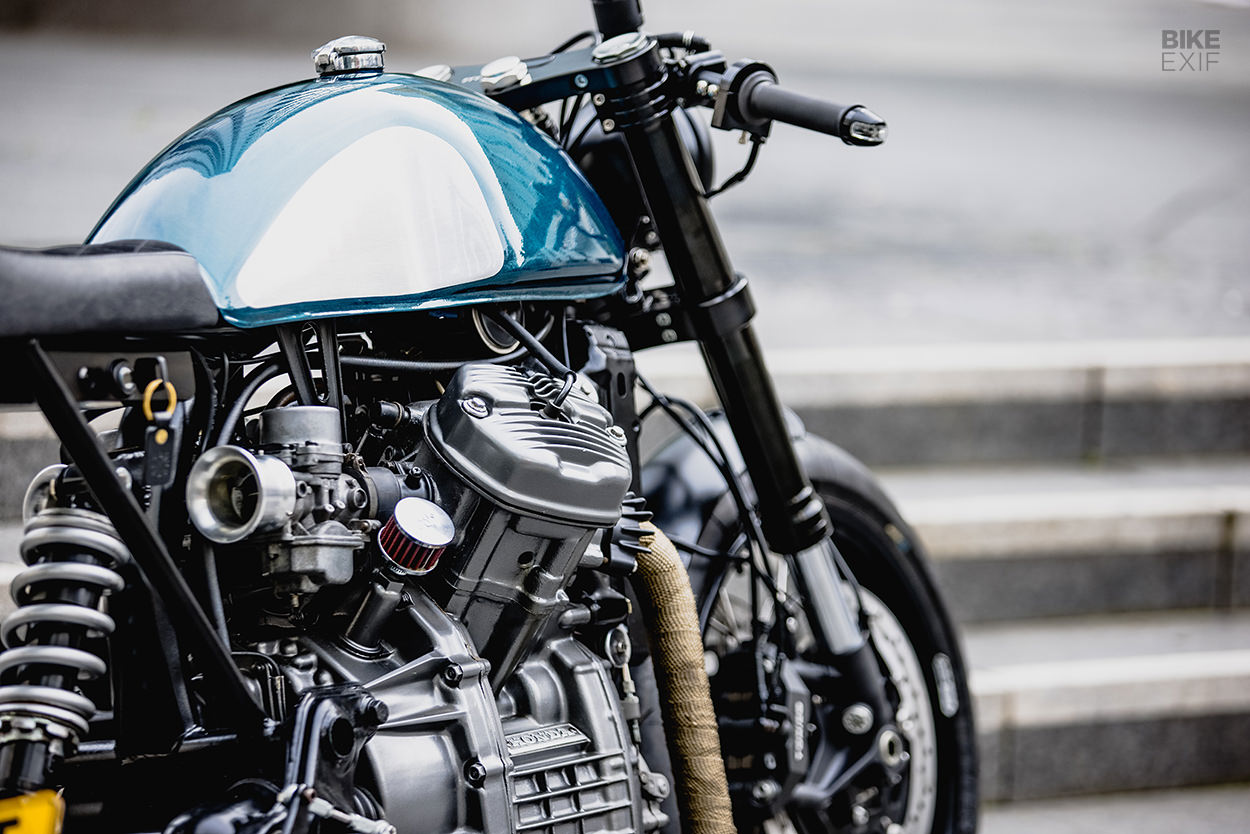 Next, it was time to correct the bike’s awkward OEM bodywork. “The original gas tank of the CX is one of my least favorite qualities of the bike,” says Harry, “so in its place I sourced a Benelli Mojave unit. This new shape really compliments the 45 degree V-twin headers, that sit perfectly astride the knee indents.”

The Benelli tank was re-lined, then topped off with a Monza-style gas cap. It’s perfectly matched to a tidy café racer-style seat—but that part took a bit longer to figure out. 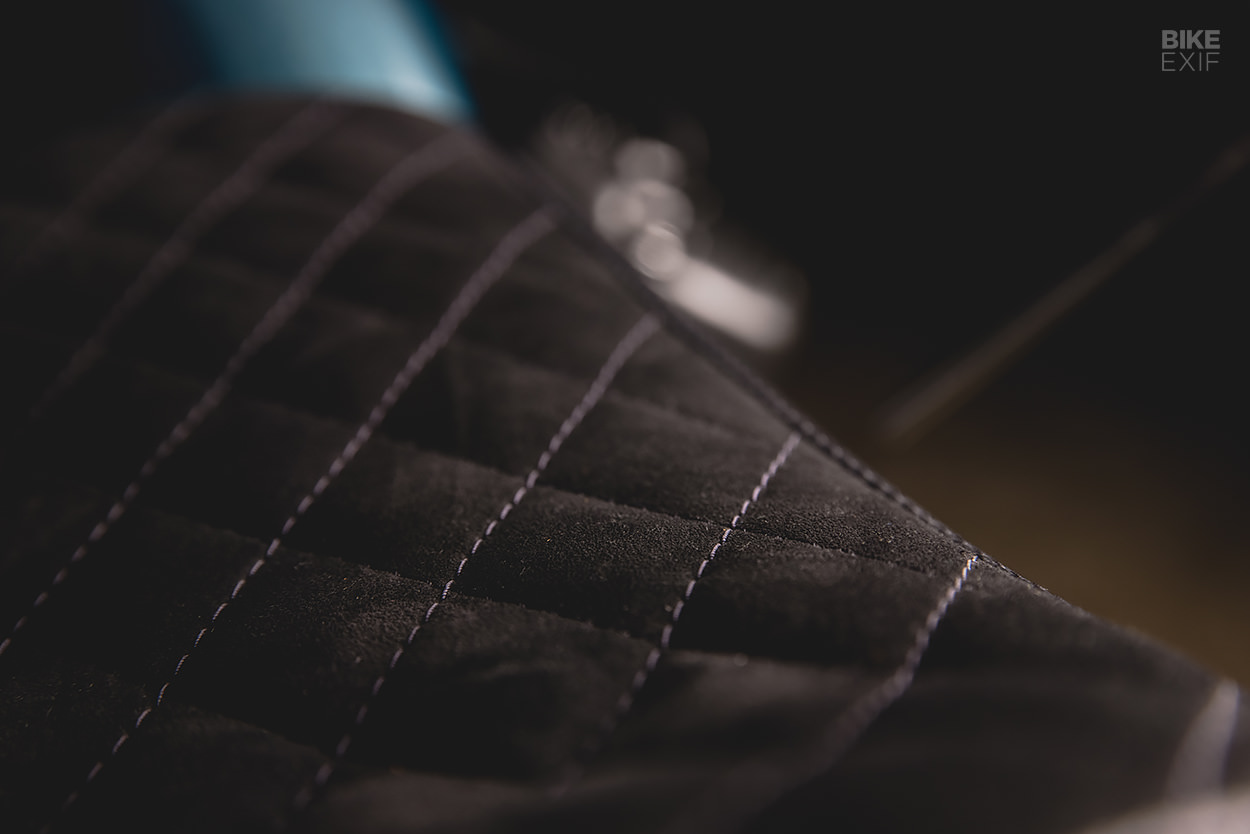 “We had to get it absolutely right, so that it would flow with the rest of the body,” says Harry. “After a couple of attempts and a few destroyed foam blocks, we were happy to send it off to our seat fabricator, Josie. It’s upholstered in black Alcantara and leather, with dark grey diamond stitching.”

Tucked under the seat is an electrical box with an all-new wiring loom, running off a small Lithium-ion battery and a Motogadget controller. It’s Bluetooth-enabled too, so you can switch the bike on with your phone (or just use the backup key ignition, if your battery’s dead). 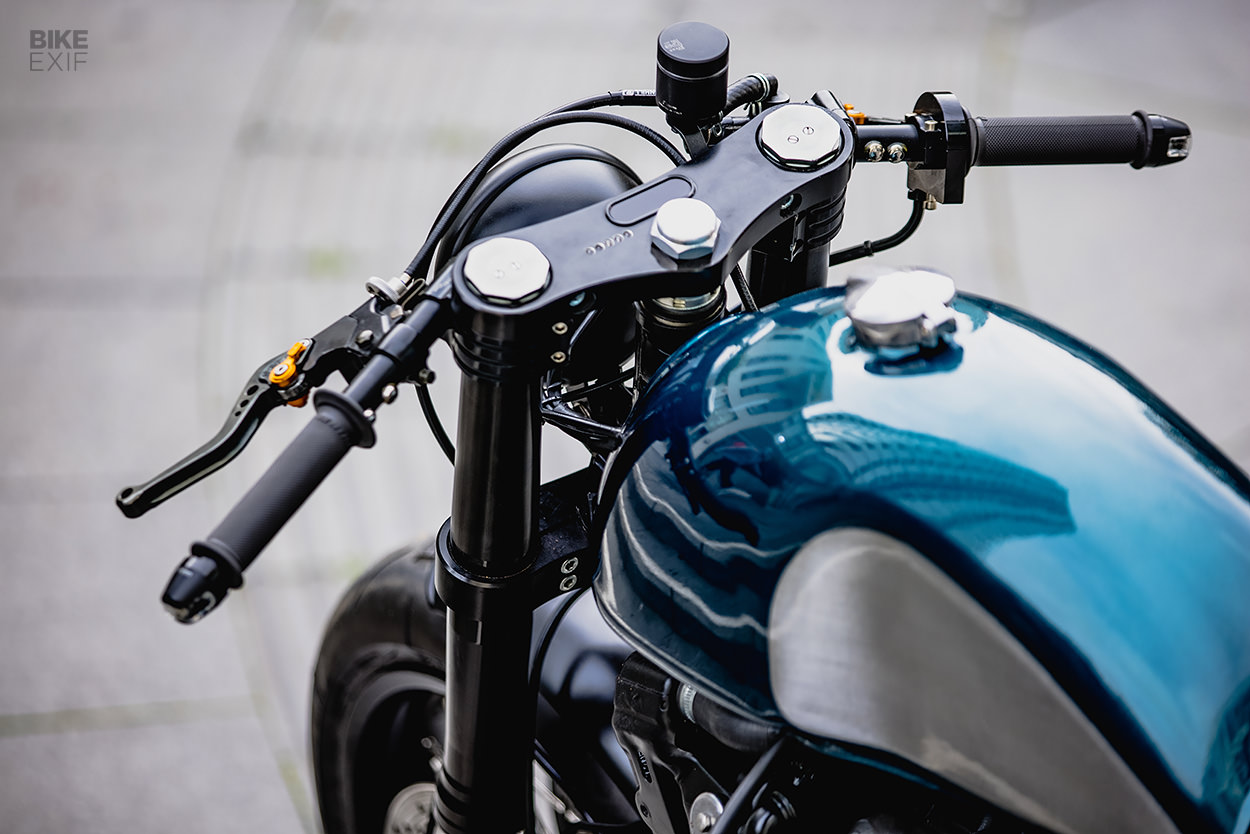 Up in the cockpit are new clip-ons and a new throttle, Renthal grips and Rizoma bar-end turn signals. Other changes include micro switches, Suzuki GSX-R brake and clutch levers with a Rizoma fluid reservoir, and a Motogadget speedo sunk into the top yoke.

The headlight’s a 5 3/4” Bates-style item, while an integrated LED strip handles taillight and turn signal duties out back. You’ll also find new rear-set foot controls, and a custom front fender. 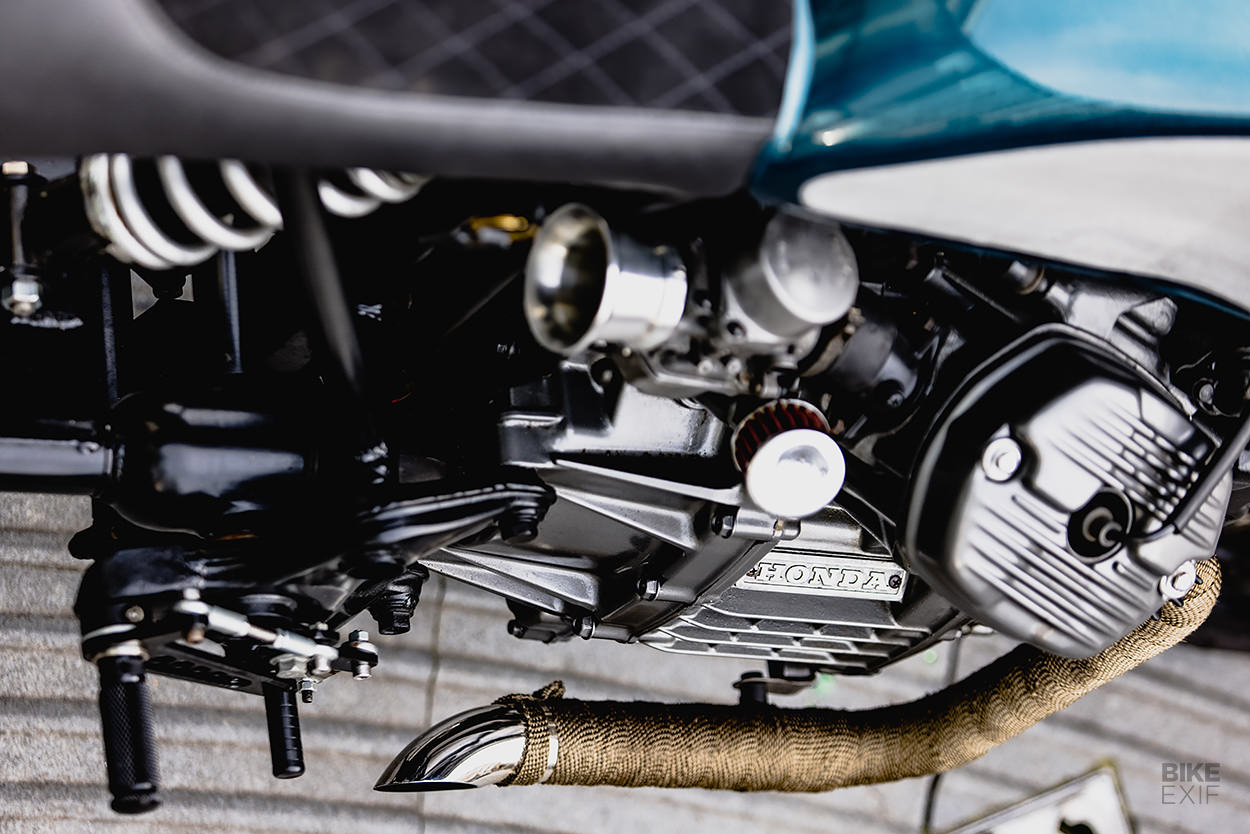 The Honda’s engine was stripped down too, then cleaned and treated to new gaskets. The carbs were rebuilt with new jets, needles, floats and gaskets, and finished off with a pair of velocity stacks.

For the exhaust, Jack welded a pair of slash-cut mufflers to a pair of custom-made headers, tucked in tight to emphasize the ‘squareness’ of the motor. And yes, the pipes are wrapped. 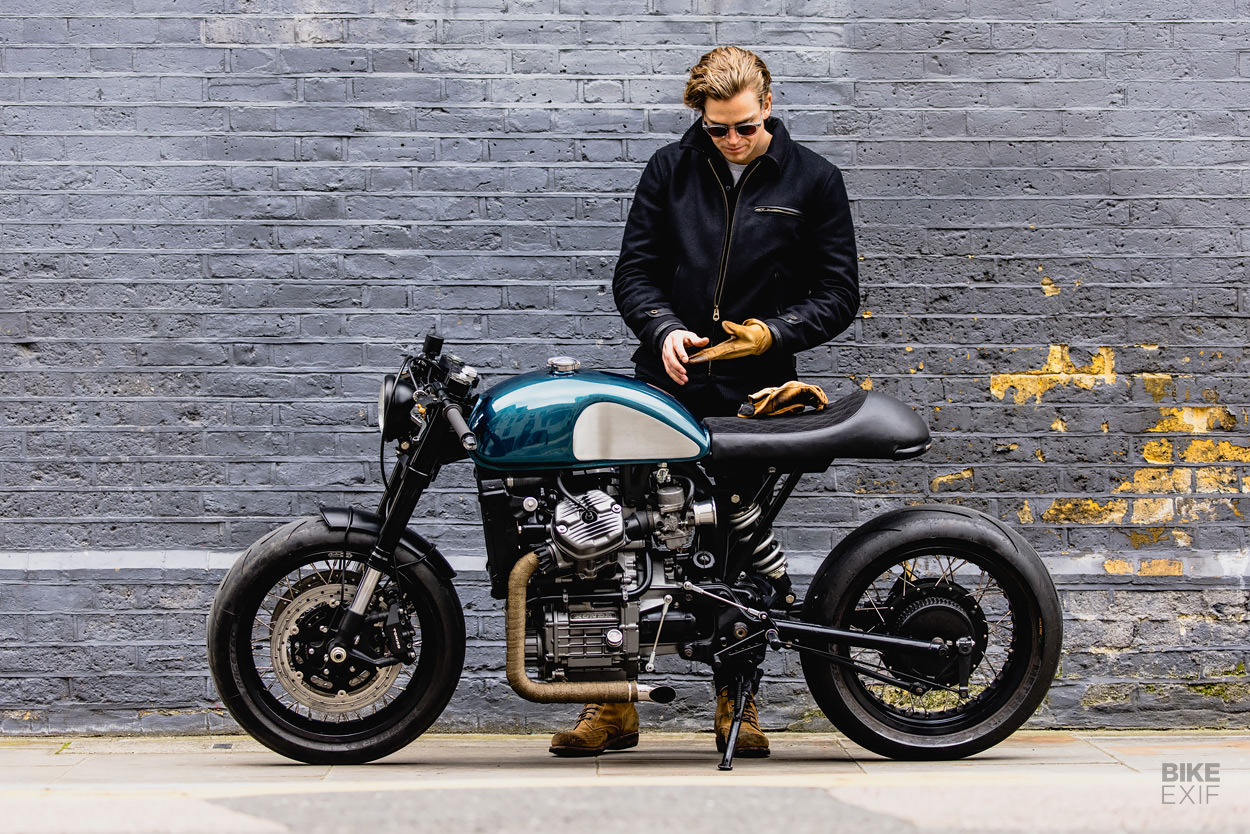 Once everything was in place, the CX500 was torn down one last time for paint. The frame was coated in satin black, and the engine in a deep pepper grey. Harry opted for a dark blue from Subaru’s swatch book for the tank, with a slight metal flake treatment to make it pop.

It’s a tasteful choice, just like every other detail on this masterfully reworked Honda. And if you’re smitten, there’s good news: the Fryer brothers have just put it up for sale. 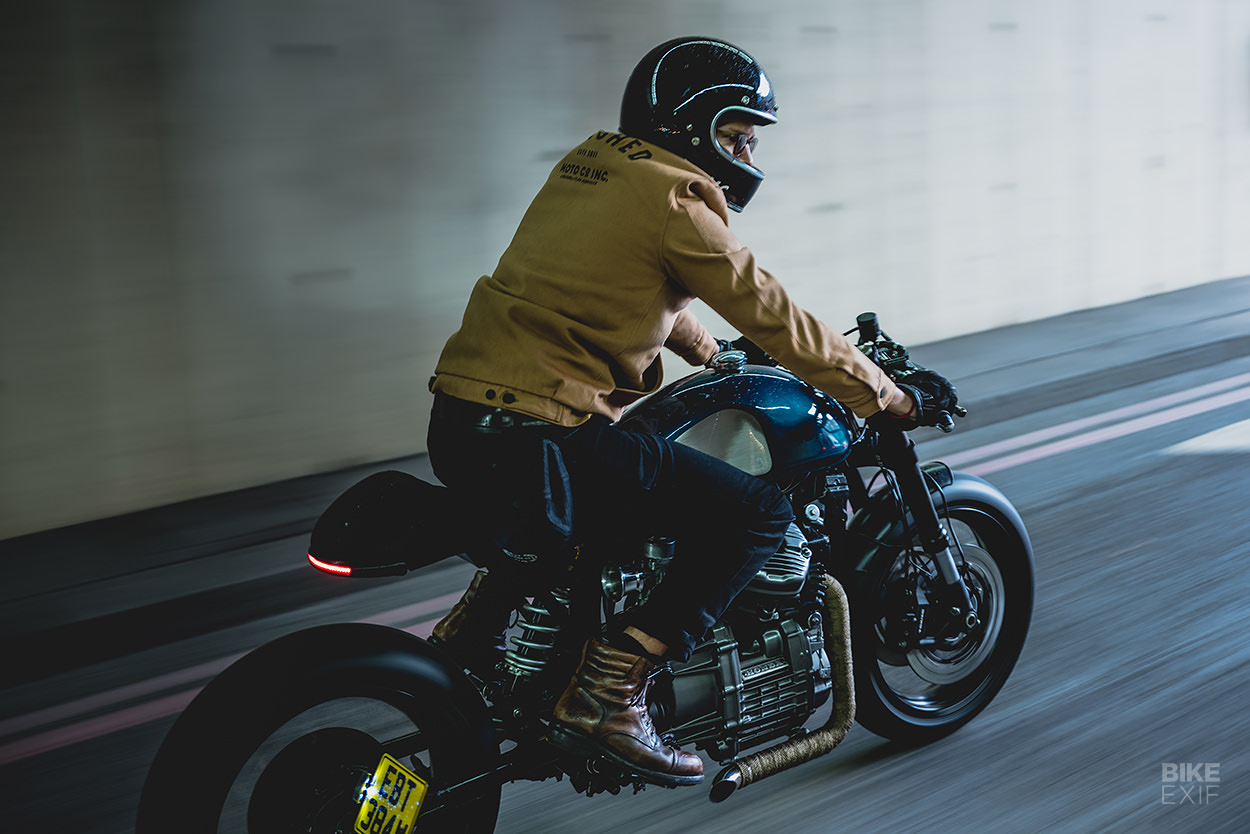