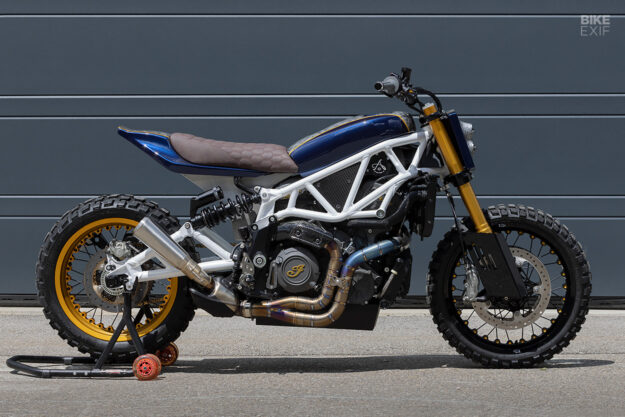 The Indian FTR 1200 is one of the few factory-made motorcycles that brings flat track style to the street. But, despite being a bucketload of fun to ride, it’s not universally loved. The biggest criticism leveled against it is related to aesthetics; it’s slathered in plastic, and that makes it look bloated.

That’s exactly what the dream team at Arctos Collection set out to address on this project. Based in Emmental, Switzerland, Arctos is an ongoing collaboration between Ulfert Janssen’s industrial design studio, Gannet Design, and Stefan Fuhrer’s custom bike workshop, Fuhrer Moto. 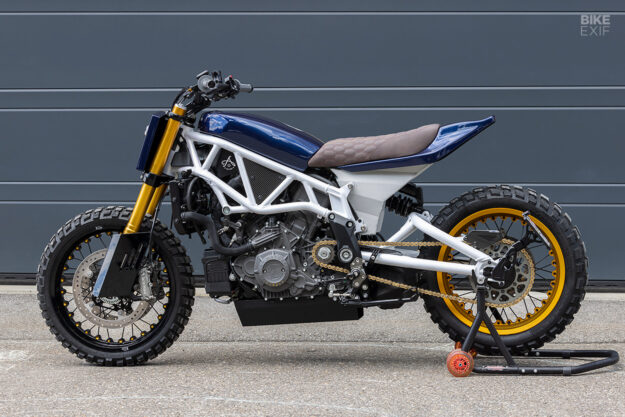 Ulfert brings years of vehicle design experience to the table, including a ten-year stint at Renault. Stefan’s an ex-MotoGP race mechanic, and now leads a capable team of mechanics and craftsmen. It’s those complementary skills that make them such a formidable team.

Starting with an Indian FTR 1200 S as a donor, Arctos set out to ramp up the bike’s flat track styling, while trimming back its bodywork. In stock form, parts of the FTR’s trellis frame are hidden by its faux fuel tank—and the guys wanted to change that.

“We immediately realized why Indian’s designers decided to partially cover the frame,” says Ulfert, “as everything is asymmetrical on that tubular frame—especially with the mono rear suspension. But we decided to take on the challenge and expose the beautiful trellis frame in full. It gave us a lot of headaches, but it was totally worth it.”

Ulfert penned a new design for the FTR, then handed it over to Stefan’s team to translate into metal. They started by molding a new tank cover out of clay, then used that as a guide to hammer out the final part. Part of the brief was to slim down the area around the handlebars too, so the Indian’s OEM dash was relocated to a housing inside the cover. 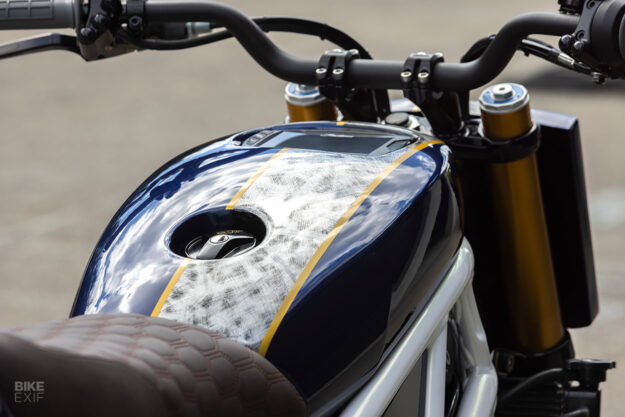 There’s more trickery out back, where Arctos swapped the FTR’s plasticky rear section for something more svelte. The aluminum part you see under the seat is an all-in-one fuel tank and subframe from Roland Sands Design. It’s a bolt-on part that uses the stock fuel pump (with some modifications), and the stock fuel filler location, with a capacity of two gallons.

Sitting on top of it is a Saddlemen tail unit and seat pad, also from RSD. The whole arrangement not only looks great, but goes a long way to give the FTR a more pared-back and purposeful vibe. 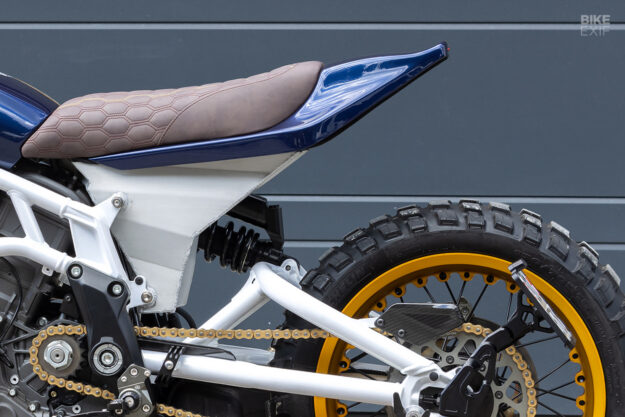 “Our goal was to integrate all the technical requirements and adjustments without affecting the concept,” says Stefan. “It was a real challenge, because of incredibly tight space issues for all the components. We had to relocate many parts and reroute the cables and electronics.”

“It was important to us that we solve and adapt the individual components in such a way that there is a coherent overall picture, to get a very sleek and technically perfect racer.” 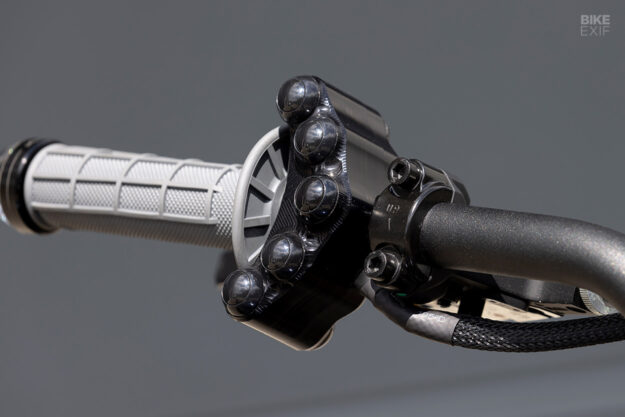 Out back you’ll find a Highsider taillight, and a side-mount license plate bracket from ABM Fahrzeugtechnik. A set of Gilles Tooling foot controls do duty lower down. 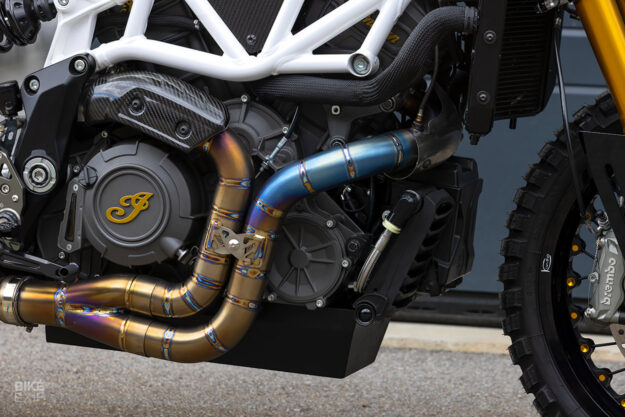 Arctos threw a few more high-end parts at the FTR to drive the point home. It now rolls on a set of Kineo wire-spoked wheels, wrapped in Michelin Anakee Wild tires. The front forks and brakes are stock (they perform well enough out the box), but the rear shock’s been swapped for a Hyperpro unit.

Those lust-worthy titanium exhaust headers are from Zard. They flow into the OEM catalytic convertor, which exits via an SC-Project muffler. 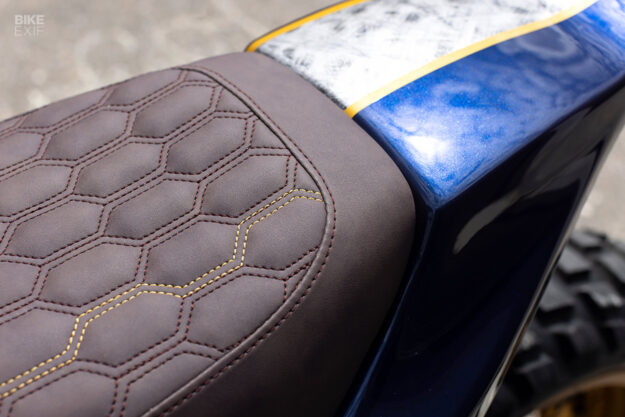 The FTR’s new livery is a mix of midnight blue and ‘scrubbed’ metal finishes, offset by gold pin-striping. The tasteful use of gold throughout the build is inspired—like the way the forks and rear wheel complement each other, the subtle gold spoke nipples on the front wheel, and the small licks of gold paint on the Indian logos.

Arctos wanted the trellis frame to be the hero here, so it, and the swingarm, were finished in a pearl white. Zwahlen NIZ topped things off with some deft upholstery (and yes, there’s a hint of gold in the stitching too). 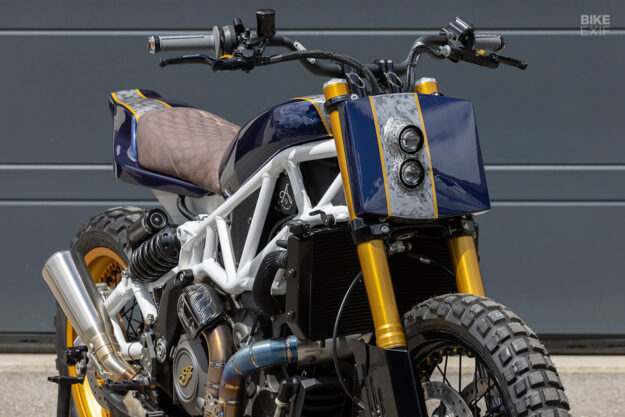 We’re fans of the FTR 1200, so if someone’s going to put it on a visual and physical diet, we’re not complaining. Who else thinks that Arctos should build a limited run of these? 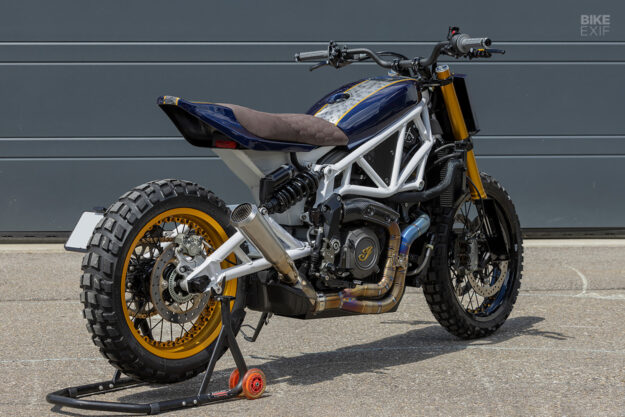