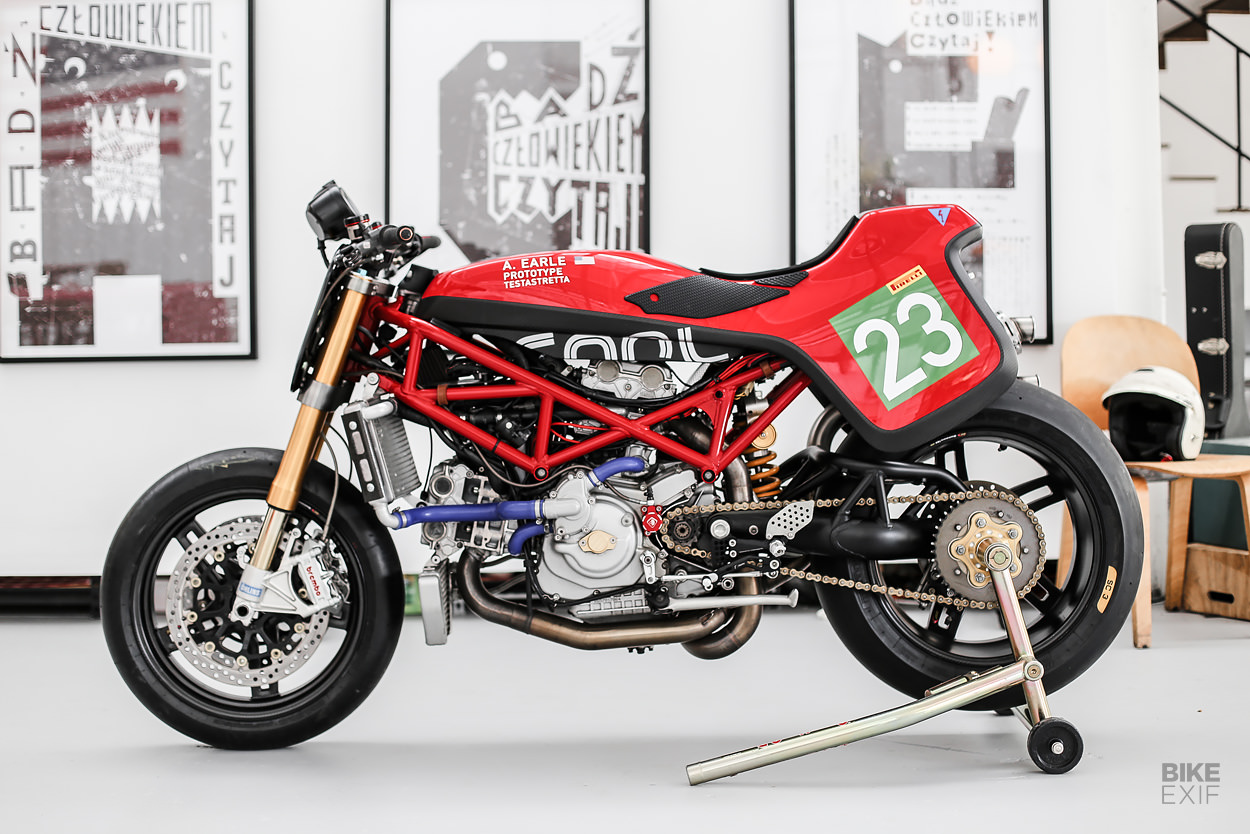 Alex Earle broke onto the custom scene emphatically ten years ago, when he designed a monocoque carbon fiber body for the iconic Ducati Monster M900. The first Earle Motors build was a stunner with 19” wheels, wide bars and oversized number boards; a street tracker before street trackers were cool.

Alex has replicated that kit a number of times since, in both fiberglass and carbon fiber variants, and even adapted it to fit Suicide Machine Co.’s mental Harley Softail. But he’s always wanted to revisit his original Ducati design, with a twist: a much bigger emphasis on performance. So he’s built another signature Earle Motors bike—only this time, it’s a track-focused brute. 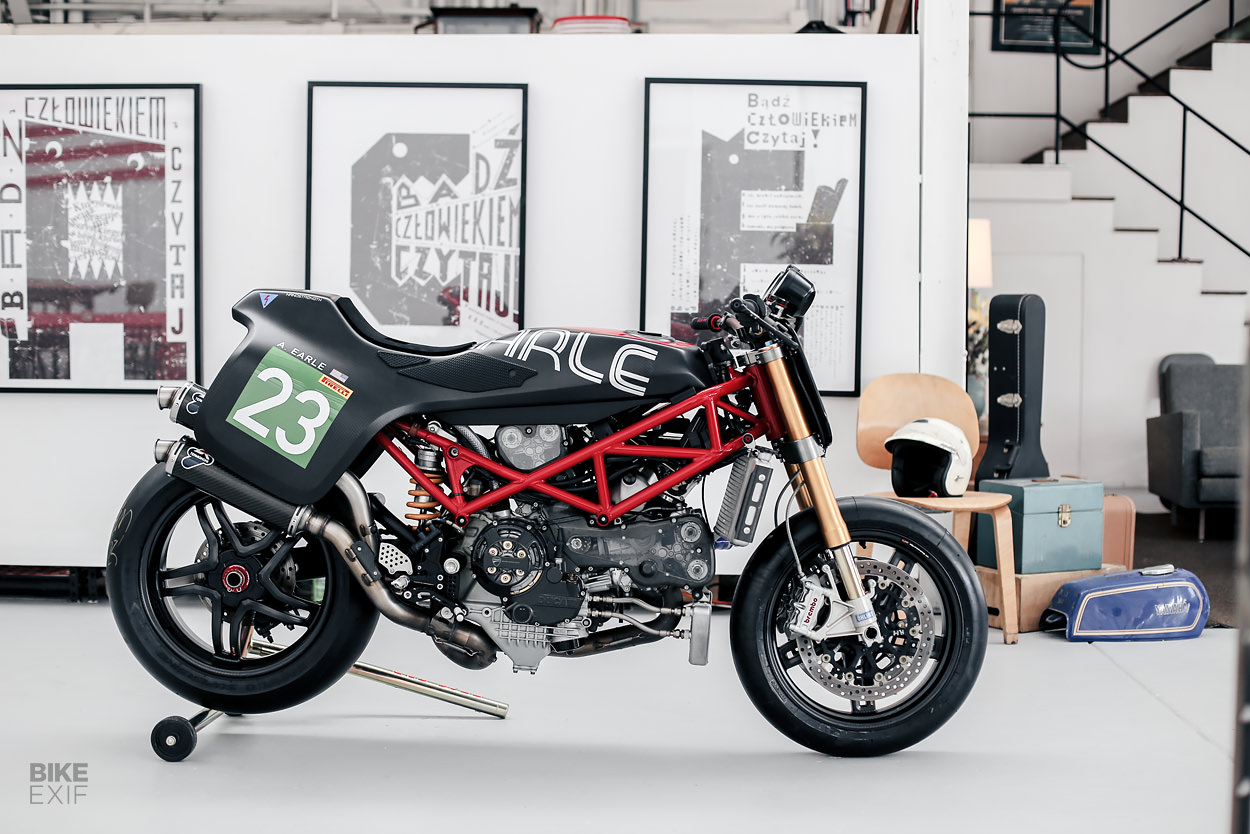 Alex chose the 2007 Ducati Monster S4RS for this project, for its legendary Testastretta motor and worthy parts spec. His goal was to reimagine his original Monster street tracker as an upright, high-bar superbike.

“After building several carbureted M900’s I really wanted to step up on power,” he tells us, “and I was suspension-shamed at a few track events! I really wanted fully adjustable suspension and great brakes, and the S4RS has all of that stock.” 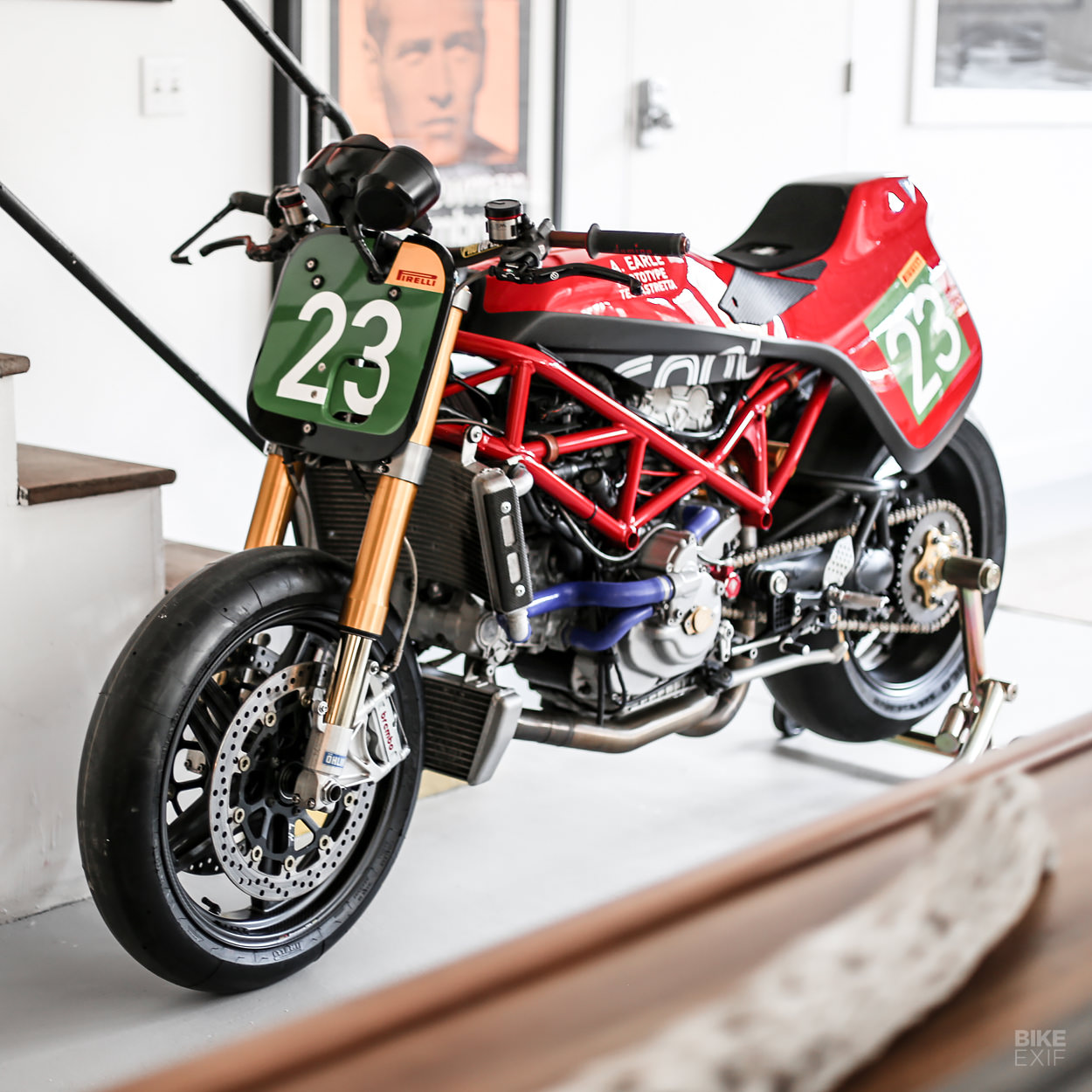 “I reached out to Victor at Moto Club Santa Monica to keep an eye out for a solid donor, and he found one that a customer was looking to move on to a good home. It was well loved and already had myriad performance enhancing mods. The previous owner was an airline mechanic who took meticulous care of the bike and gave her a name.” 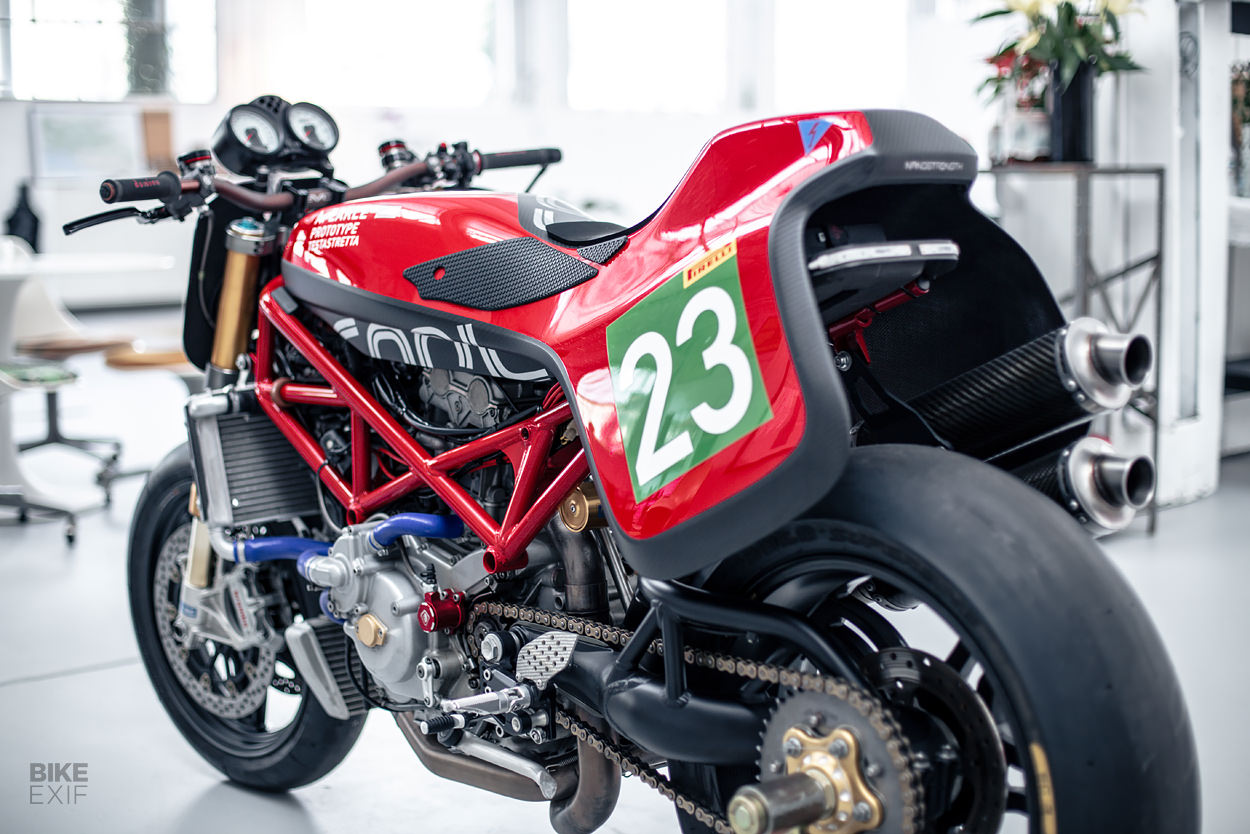 It’s worth revisiting how Alex originally designed his monocoque Monster body. He first sculpted a 1/5 scale model of the bike, 3D scanned it, rebuilt it to scale digitally, then CNC-milled a foam master to produce the final mold. It’s a process he’s familiar with, given his extensive experience as an automotive designer.

Alex managed to adapt the M900 bodywork design to the S4RS chassis with little fuss, and with minimal changes to the frame beneath it. 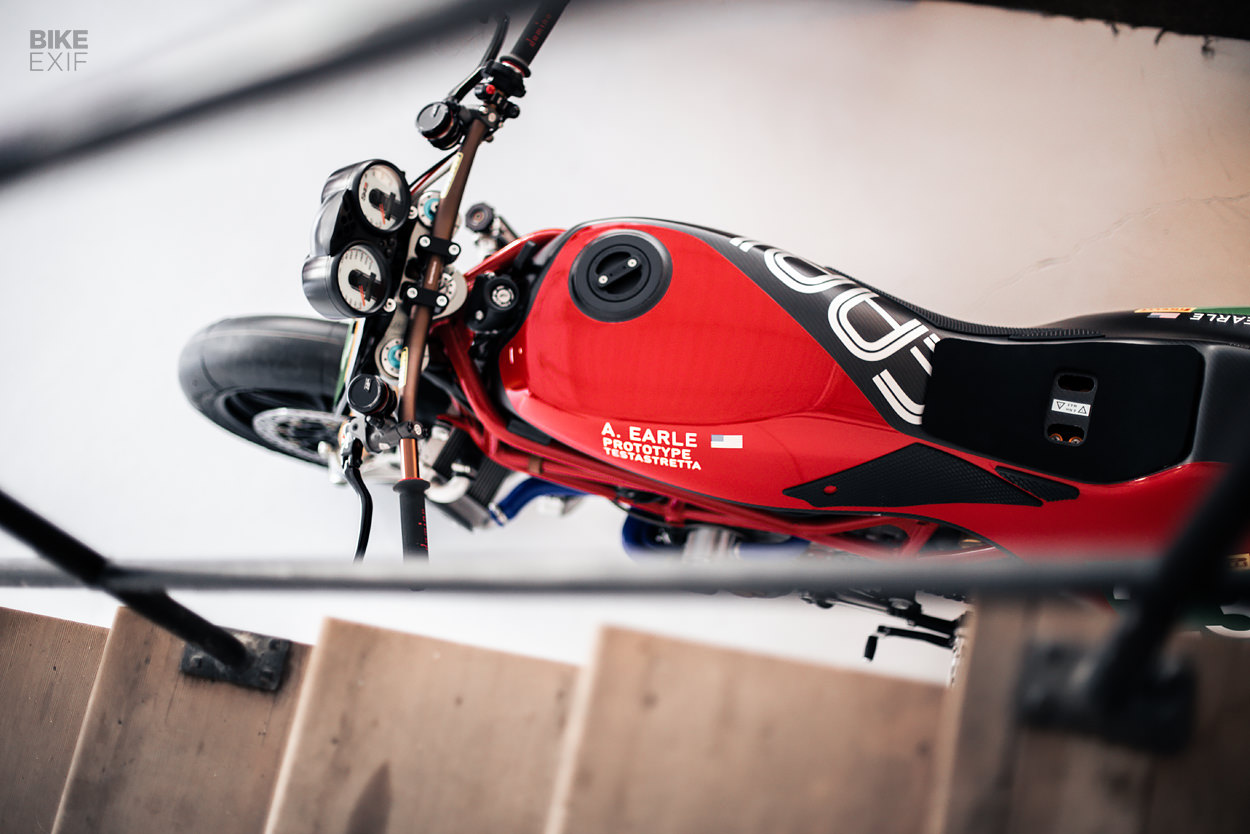 The body has an integrated fuel cell, with an aviation fuel cap that’s been bonded in rather than bolted down. The entire thing can be removed in mere minutes via four bolts, a rubber pull down at the front and quick-disconnect fuel lines.

Hiding underneath everything is a carbon fiber inner fender and battery tray, with LED marker lights mounted out back. Alex deleted the airbox too, so the Ducati now inhales through a pair of K&N filters, housed in the front part of the monocoque. A slim racing pad and knee grips focus on control rather than comfort. 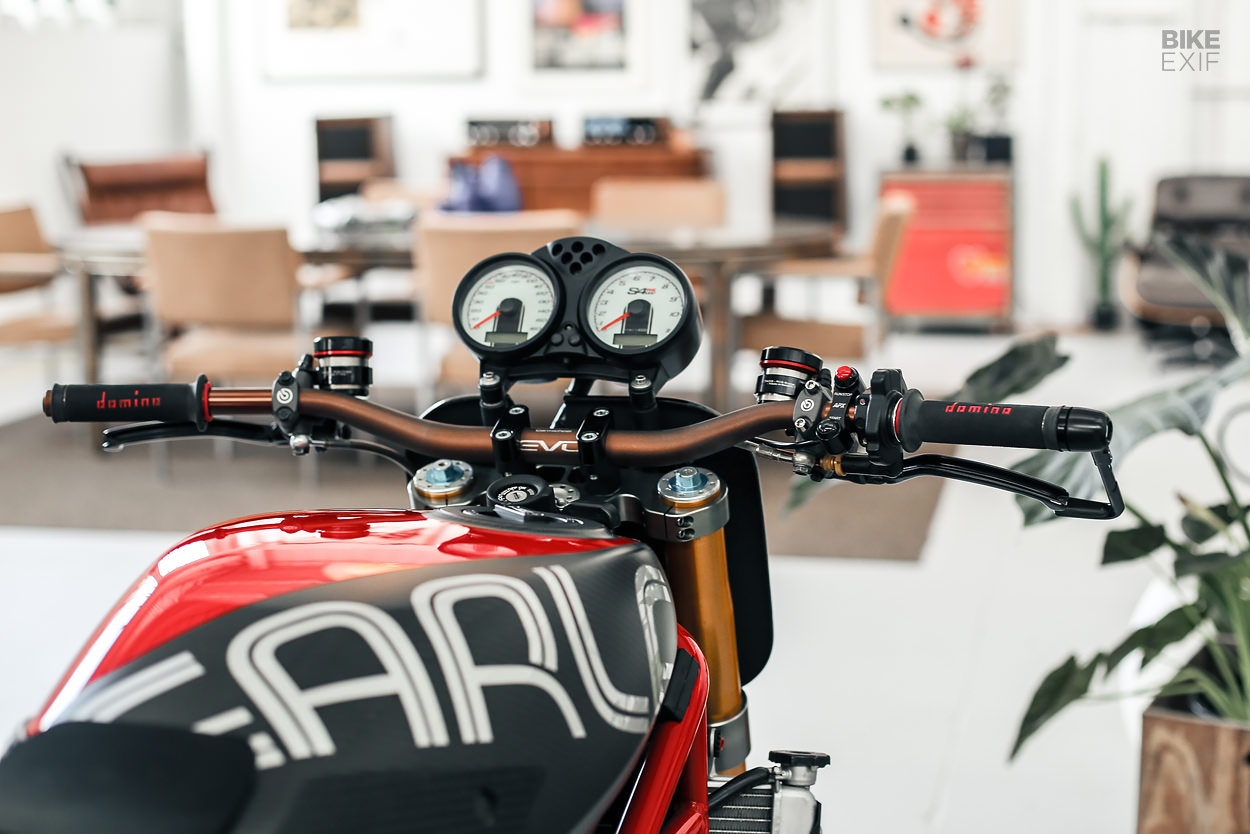 Up top are a set of wide ProTaper Evo handlebars, with adjustable Rizoma rear sets lower down. The cockpit also features Domino grips, Brembo RCS levers with AEM reservoirs, a track-spec starter switch from APX, and the stock dash remounted on a custom bracket.

According to Alex, the ergonomics are now spot on; “the body shape is wonderfully suited to rider movement and input on the track,” he confirms. 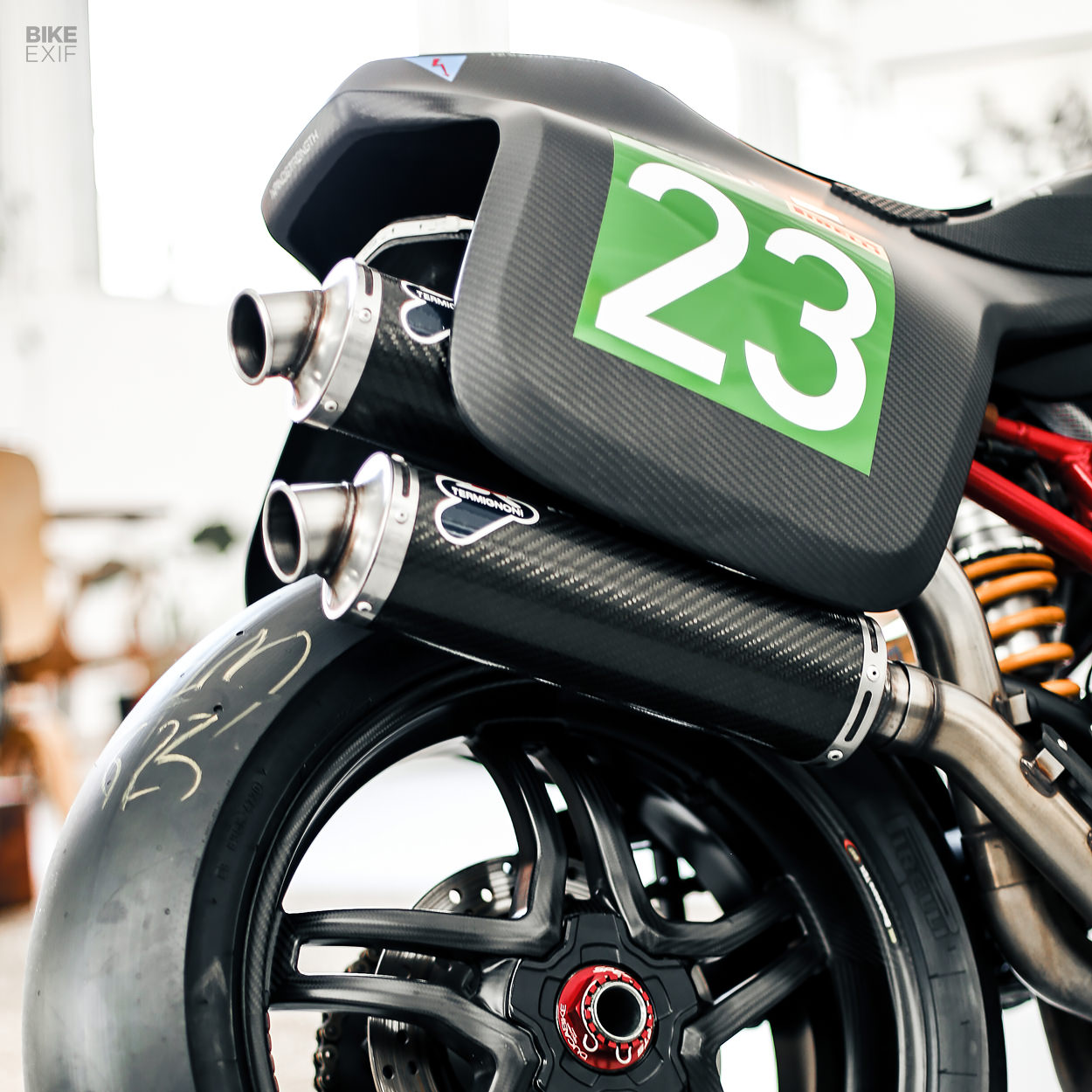 The Monster’s 130 hp lump is plenty powerful (especially considering the diet this bike’s been on), and with Öhlins and Brembo parts standard issue on the S4RS, Alex didn’t need to add much more. But he did anyway, in the form of twin carbon Termignoni pipes, and a pair of lust-worthy 17” carbon fiber hoops from BST.

Alex’s new Monster takes everything from his original design, and dials it up to eleven. And as you’d expect from a man with his sharp eye, it’s draped in a classy endurance racing-inspired livery. With raw, satin-finished carbon fiber on one side, and glossy Ducati red on the other, this S4RS looks potent from any angle. 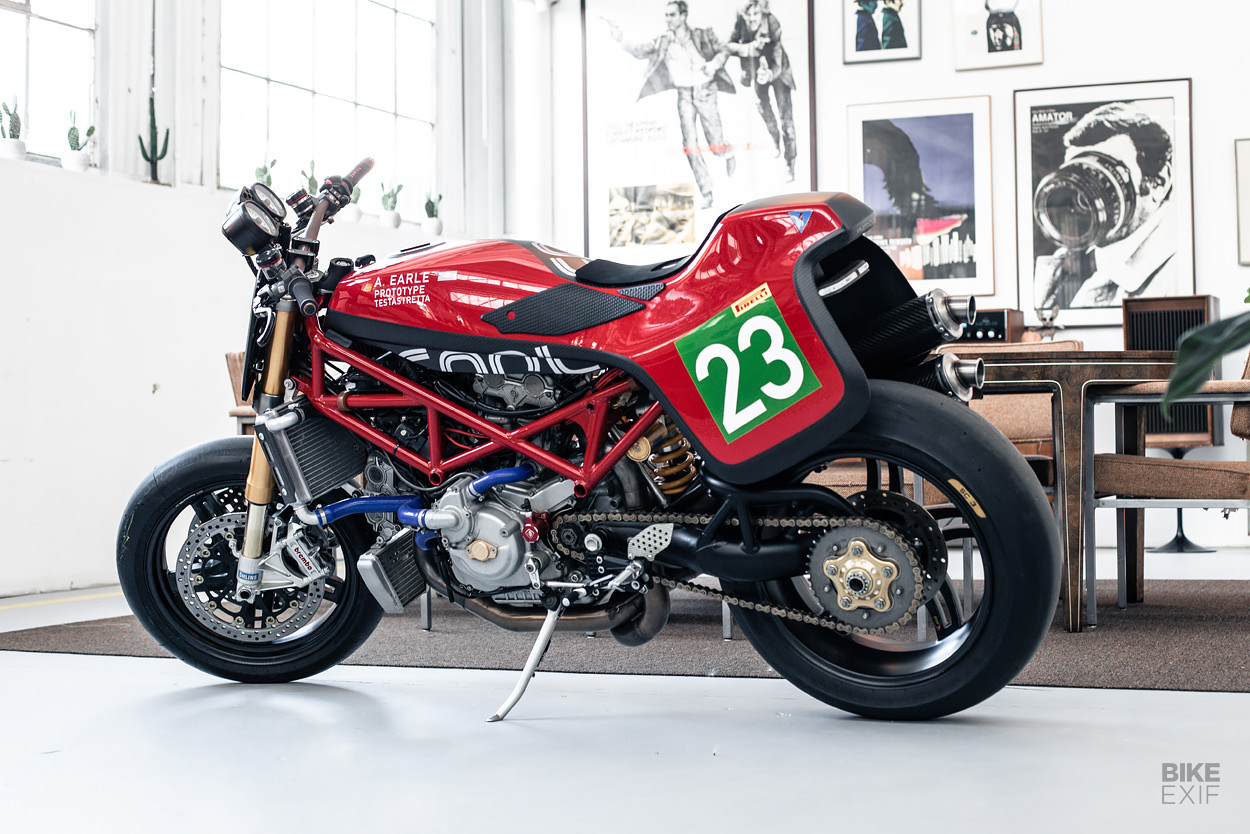 It’s been a decade since Alex first penned these lines, but they still feel fresh here. And probably still will ten years from now. 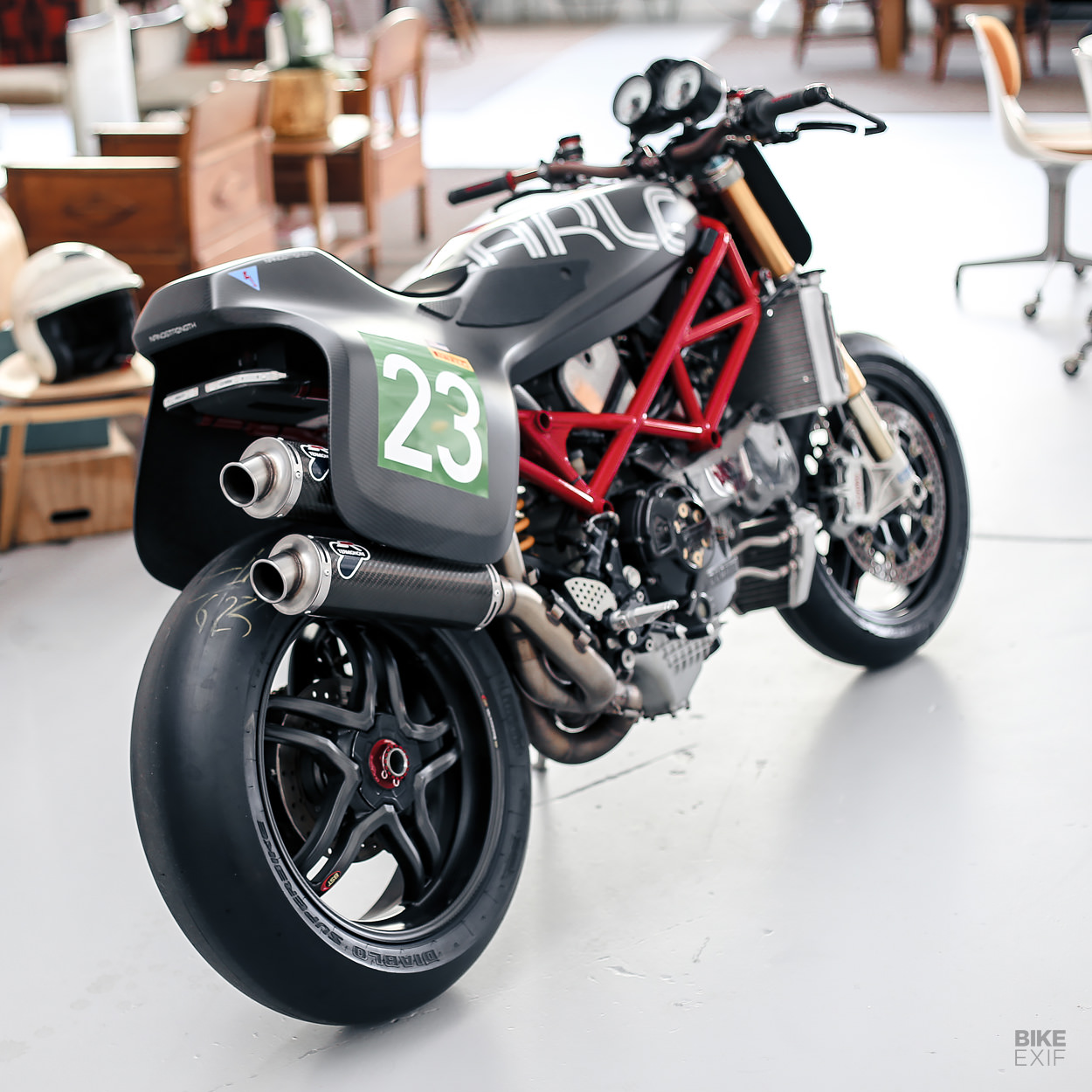