The art of speed: The Raisch x Ram Katzir Triumph 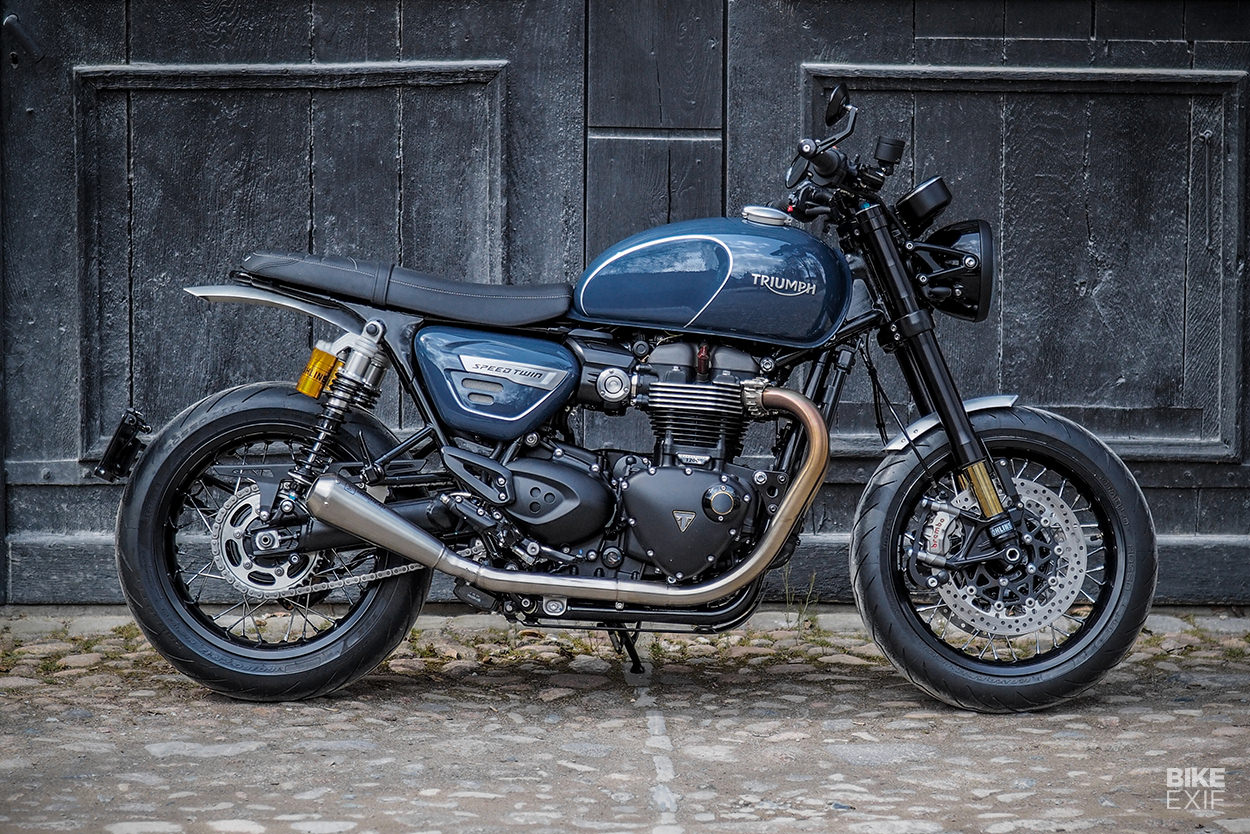 Amsterdam-based sculptor Ram Katzir captures still life when he’s at work, but when he’s on two wheels, he likes to travel very fast indeed. His current ride is this ballistic Triumph Speed Twin, which he designed with the help of German bike builder and racer Chris Raisch.

This is second time that Ram has worked with Chris: the first was upgrading the engine on a smart Street Twin built by Motokouture in Belgium. 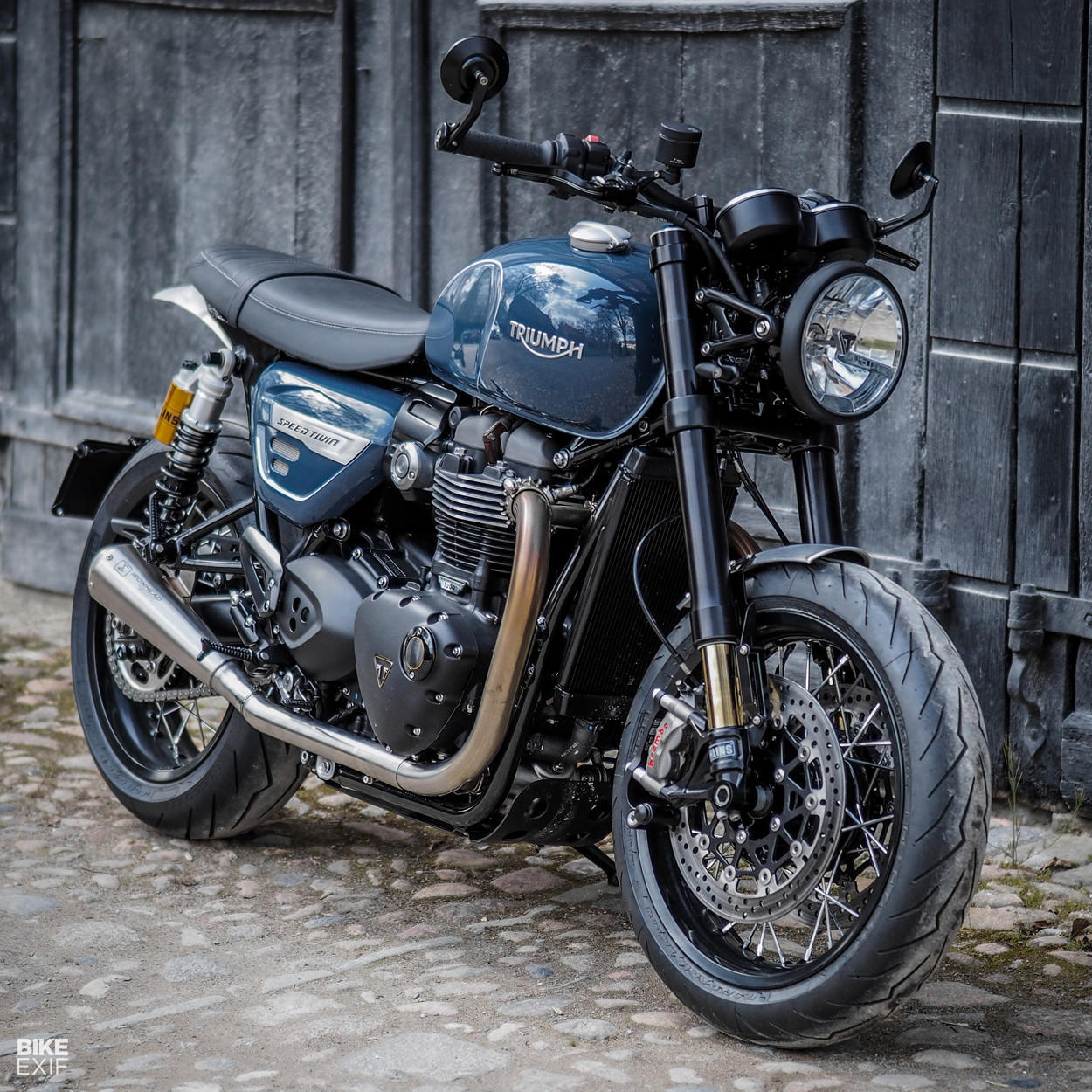 We’re fans of Triumph’s even sportier Speed Twin, because it matches classic looks and rider-friendly ergonomics to thoroughly modern performance.

It’s no slouch when it leaves the factory: the 1,200 cc 8-valve motor pumps out a hefty 96 hp from the crank. But there’s always room for improvement—on both the power and weight fronts. 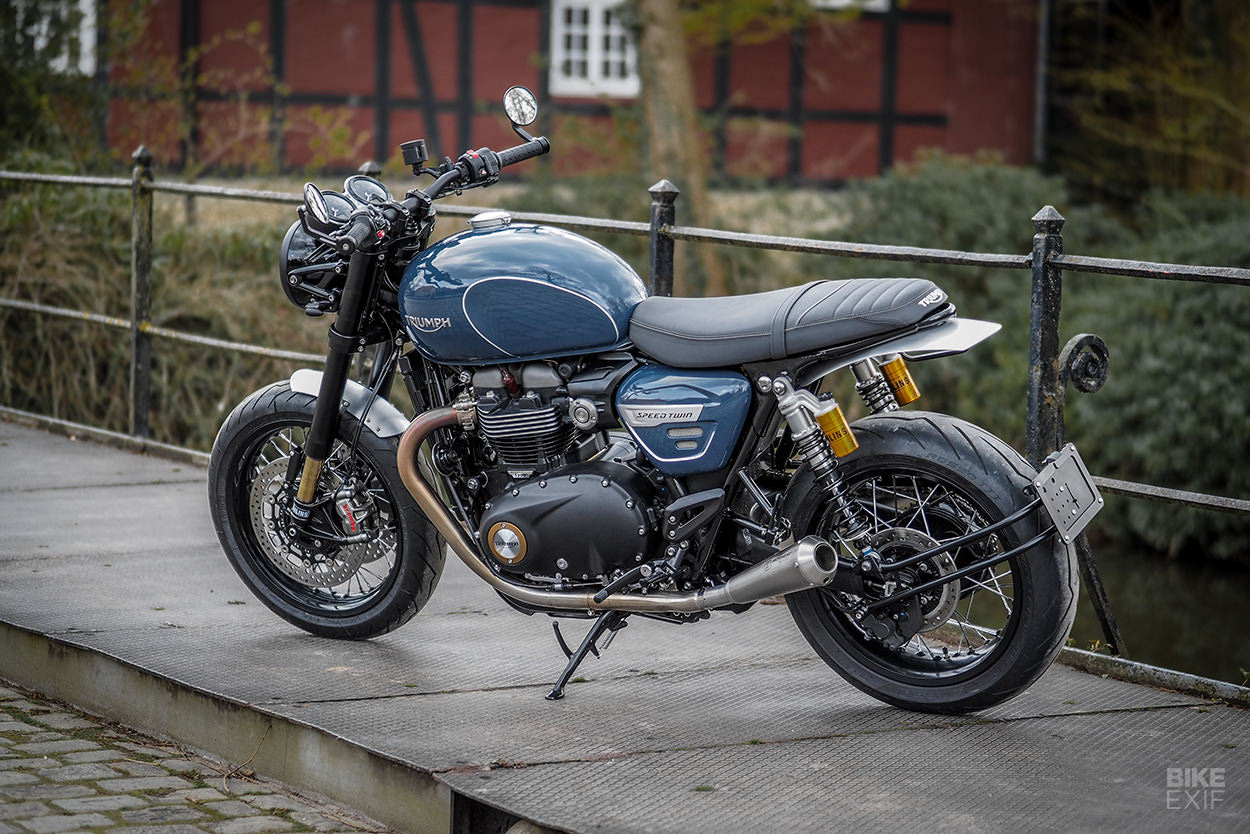 There are so many mods on this good-looking 2021 Speed Twin, it’s hard to know where to start. Chris has installed his own Stage 2 Speed Twin kit, which includes an X-pipe, a custom milled air filter cover with larger inlet, and a Dynojet Power Commander 5 with a custom Raisch map developed on the dyno.

Straight out of the box, in the key speed range of 4600 to 4700 rpm, this kit bumps power up by 11 horses at the back wheel, with a useful 17 Nm boost in torque. The exhaust system is an Ixil Ironhead, modified at the muffler end with Chris’ own race-style dB killers. 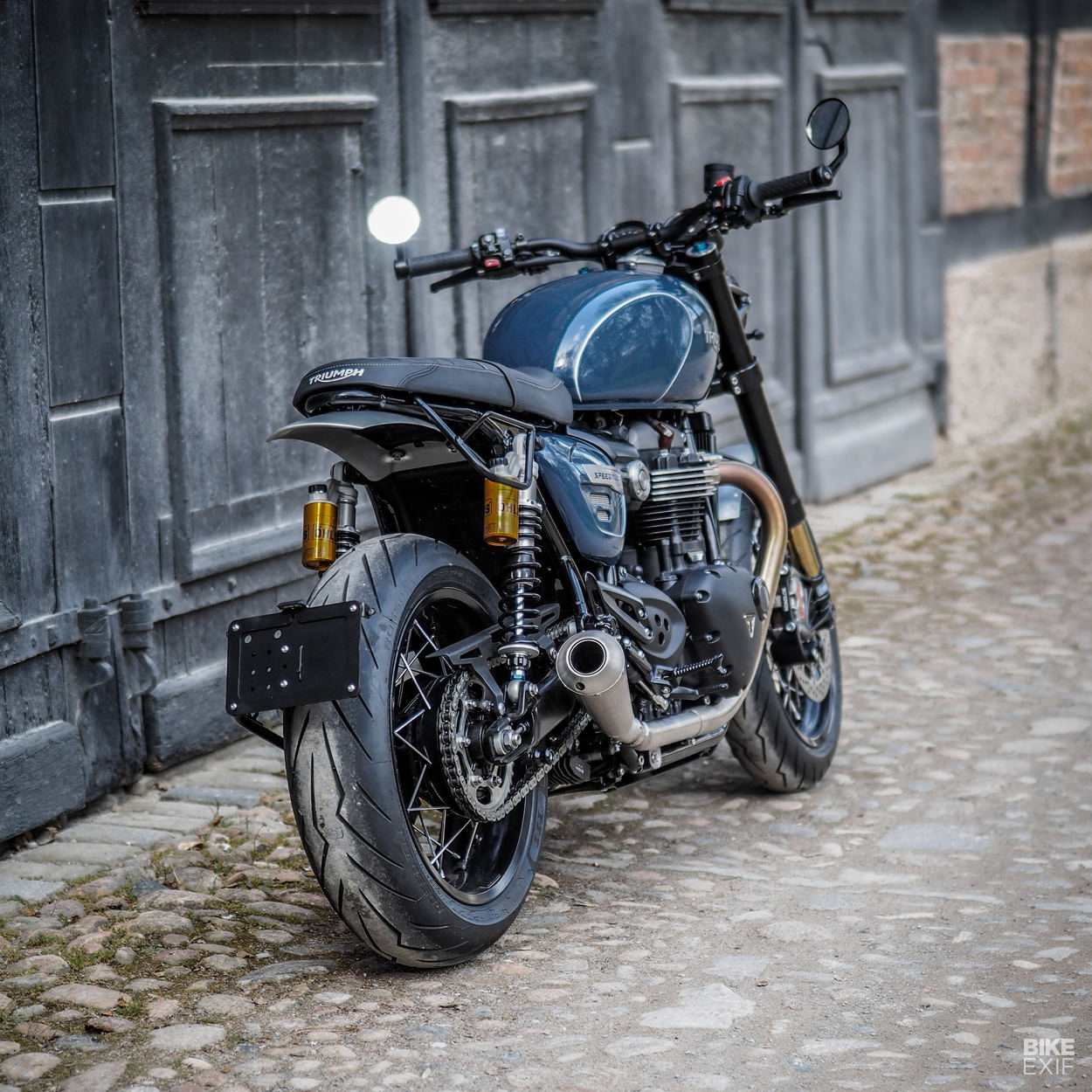 When the engine is serviced at the 16,000 km mark, Chris will add a Stage 4 cam and retune for even more wallop. But for the initial round of mods, he left the engine internals alone and switched his attention to the suspension.

The Thruxton forks are from the Triumph Factory Custom range, which means they’re Öhlins 43 mm NIX30 USD units with 120 mm of travel. The tubes have been anodized in matt black, for a more subdued effect than the usual Öhlins gold. 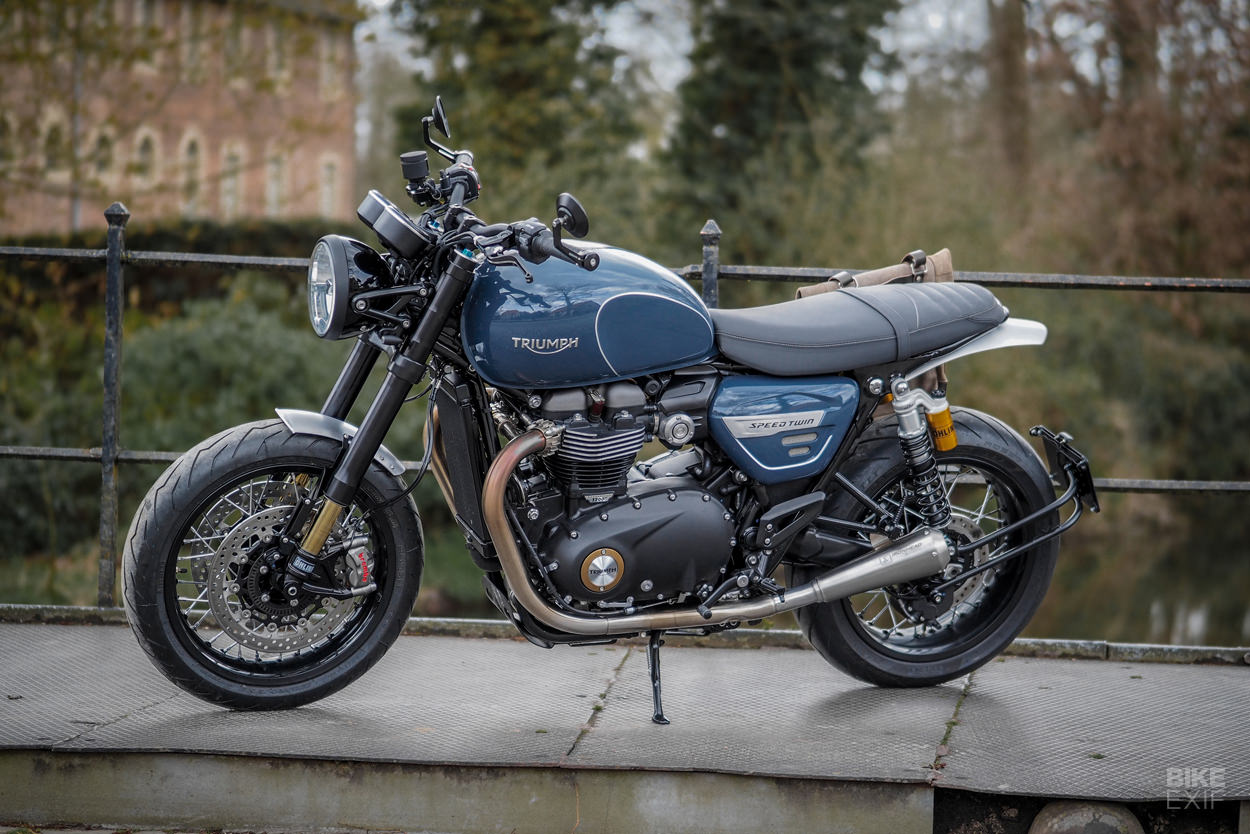 Eagle eyes will also spot the Roadlok bolted onto the caliper for extra security when the bike is parked up, and the 17-inch aluminum rims have been lifted from a Thruxton R. 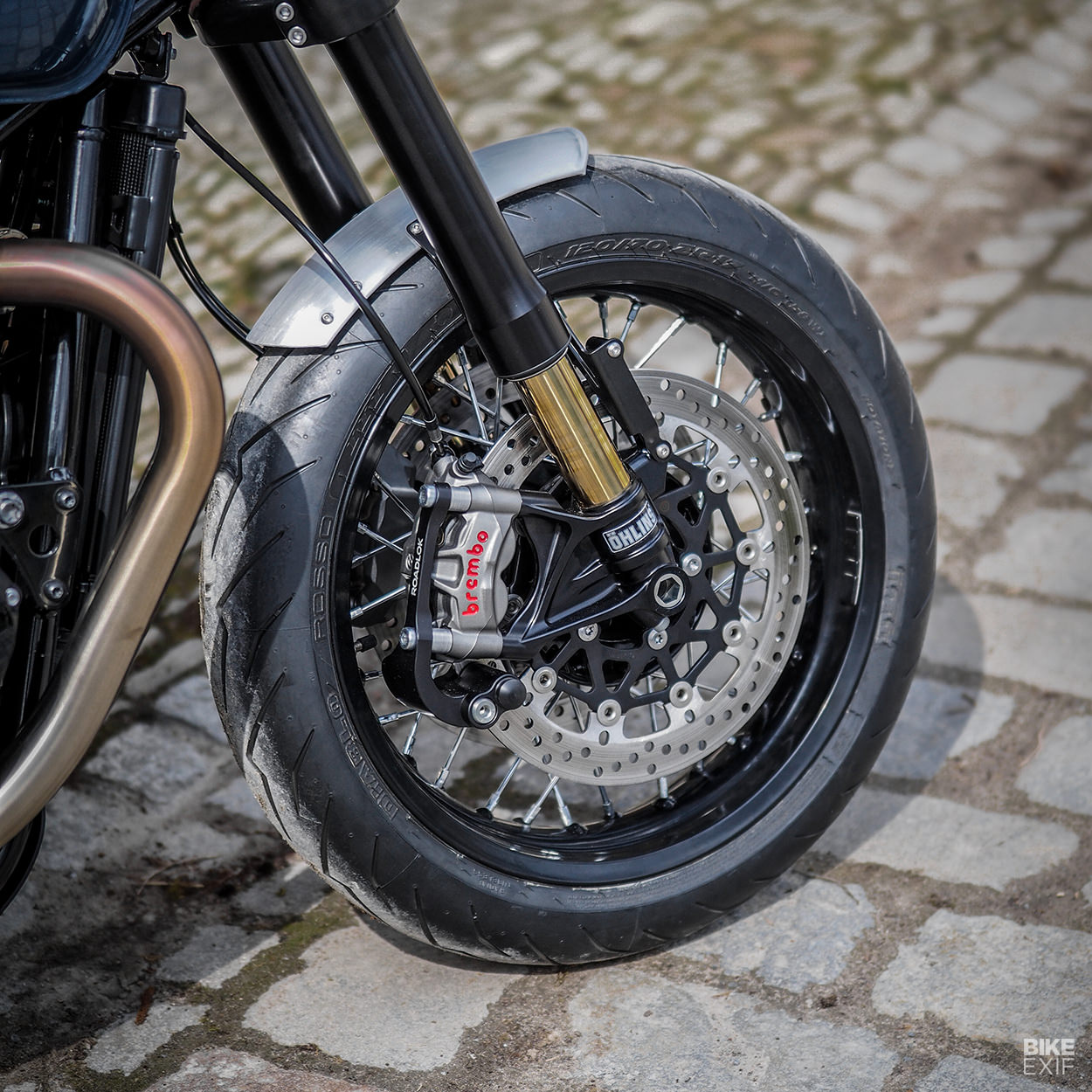 The cockpit gets tasty upgrades too. The levers on the LSL Superbike bars are top-shelf ABM Wunderkinds, the brake reservoir is a classy machined number from Rizoma, and bar-end mirrors keep everything clean.

Triumph’s own heated grips keep Ram’s hands warm during chilly Dutch winters, and Ducati spacers take the slop out of the ride by wire throttle system. 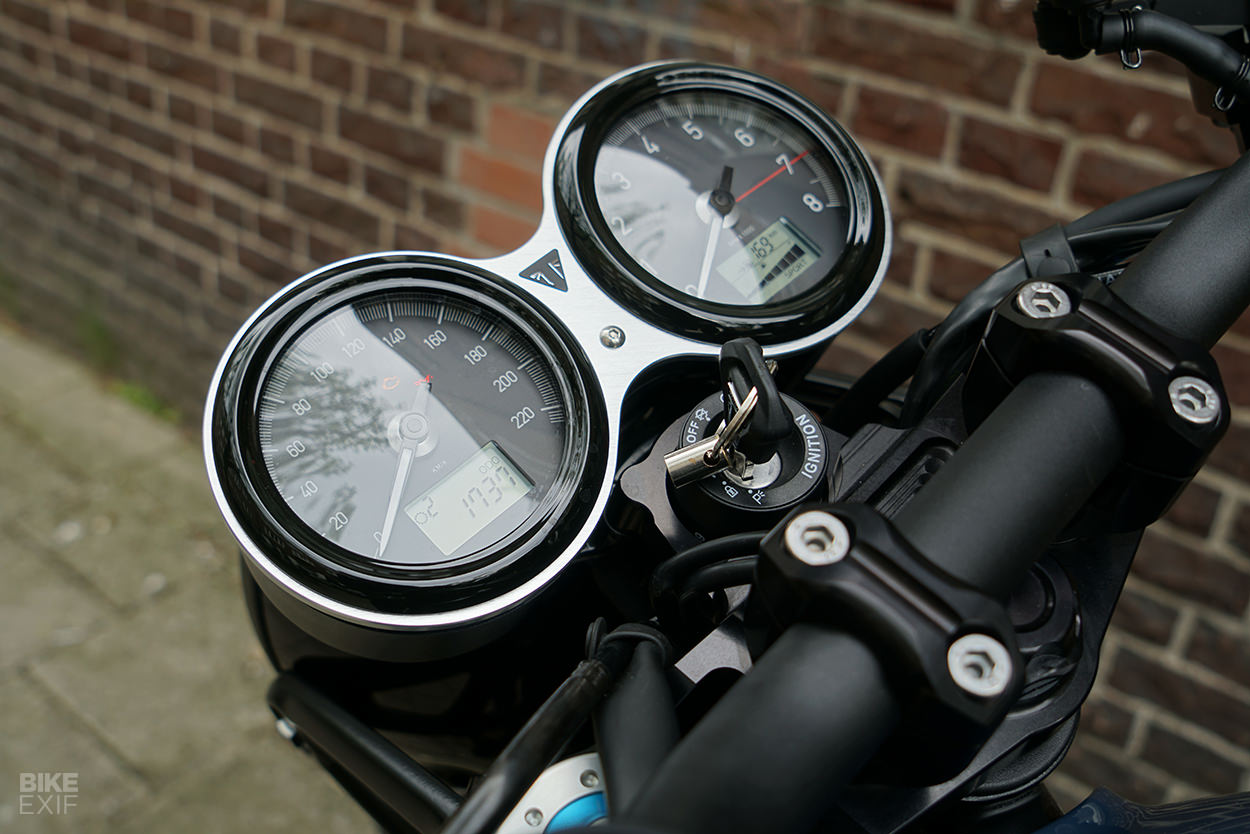 Little details are everywhere: Ram and Chris have even swapped out the original instrument faces, replacing them with new overlays from Arton Works that have simpler graphics and a vintage racing vibe. 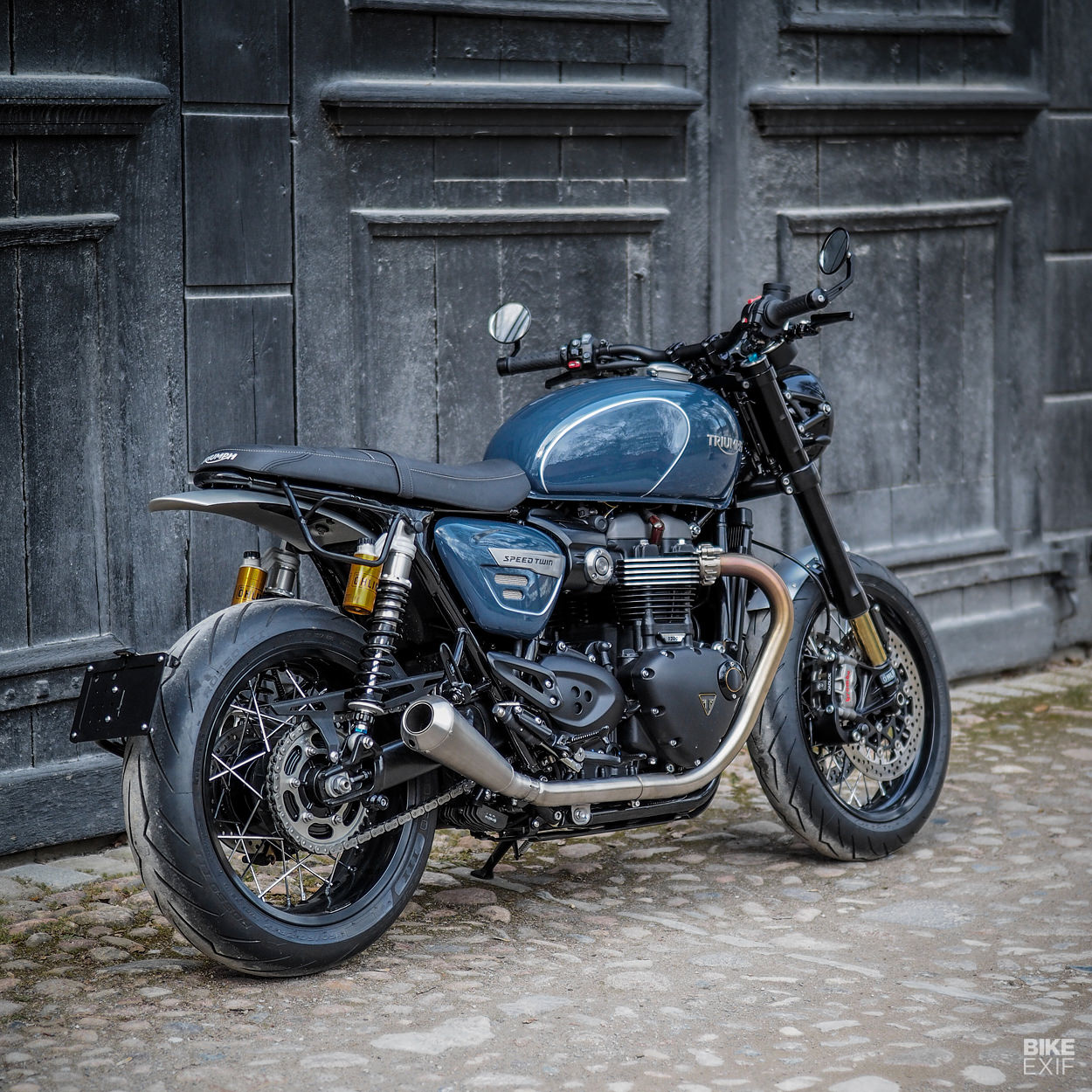 A custom made licence plate holder—attached to the swingarm—carries Motogadget mo.blaze tens3 blinkers. These are the smallest 3-in-1 blinkers in the world, handling turn signal, rear light and brake light duties in one element.

At the front end, the stock blinkers have been swapped out for Rizoma bullet indicators. 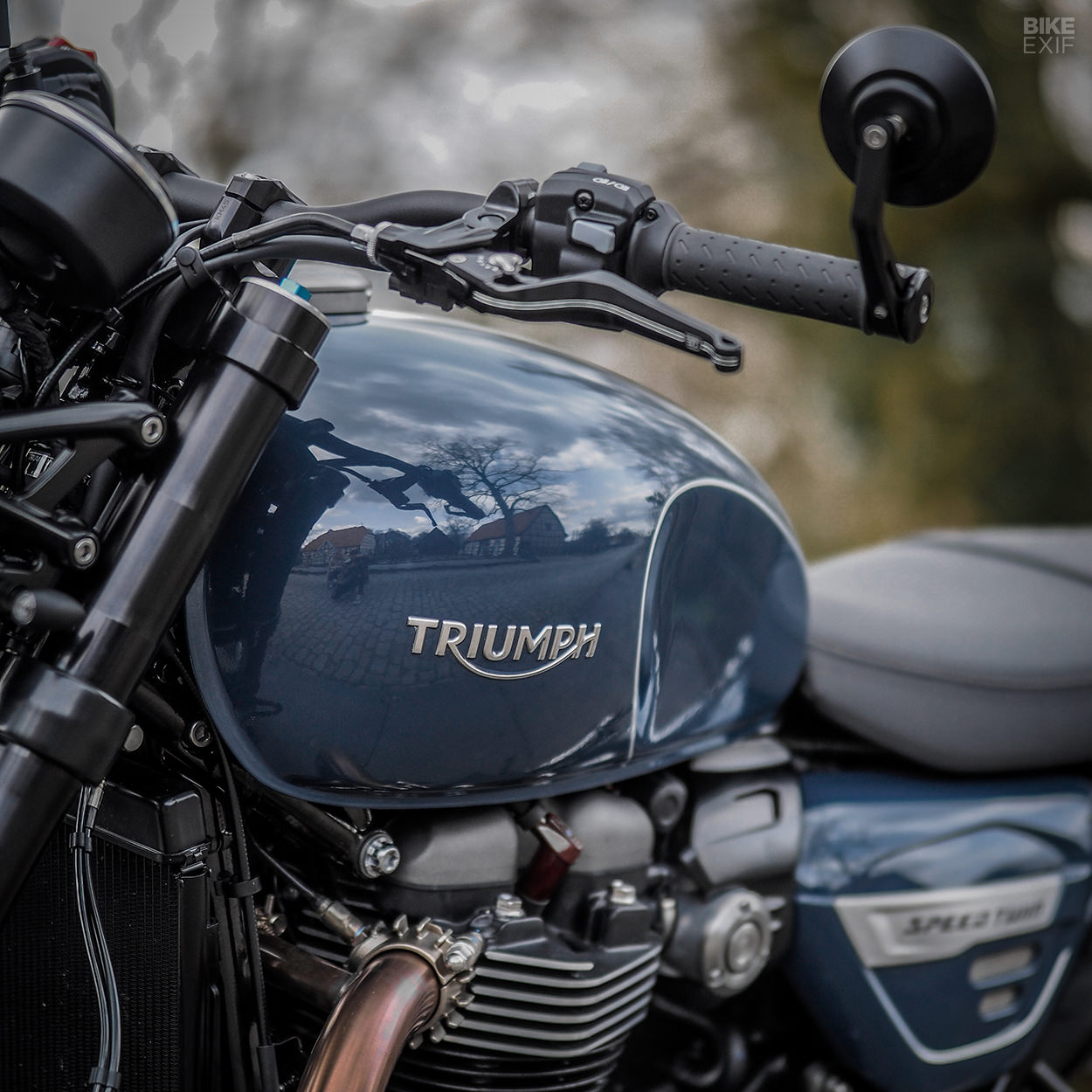 After applying powder to the swing arm, lamp brackets, rear sets and selected engine parts, Chris sent the Speed Twin off to TopCoating in Tilburg for a custom paint job.

That workshop handles the paint for Ram’s sculptures, and they finished off the Triumph with a custom blend of cobalt blue and slate grey. The silver pin striping on the tank and side covers has a brushed aluminum look, and there’s a layer of matt varnish on top of everything to add depth to the vintage color scheme. 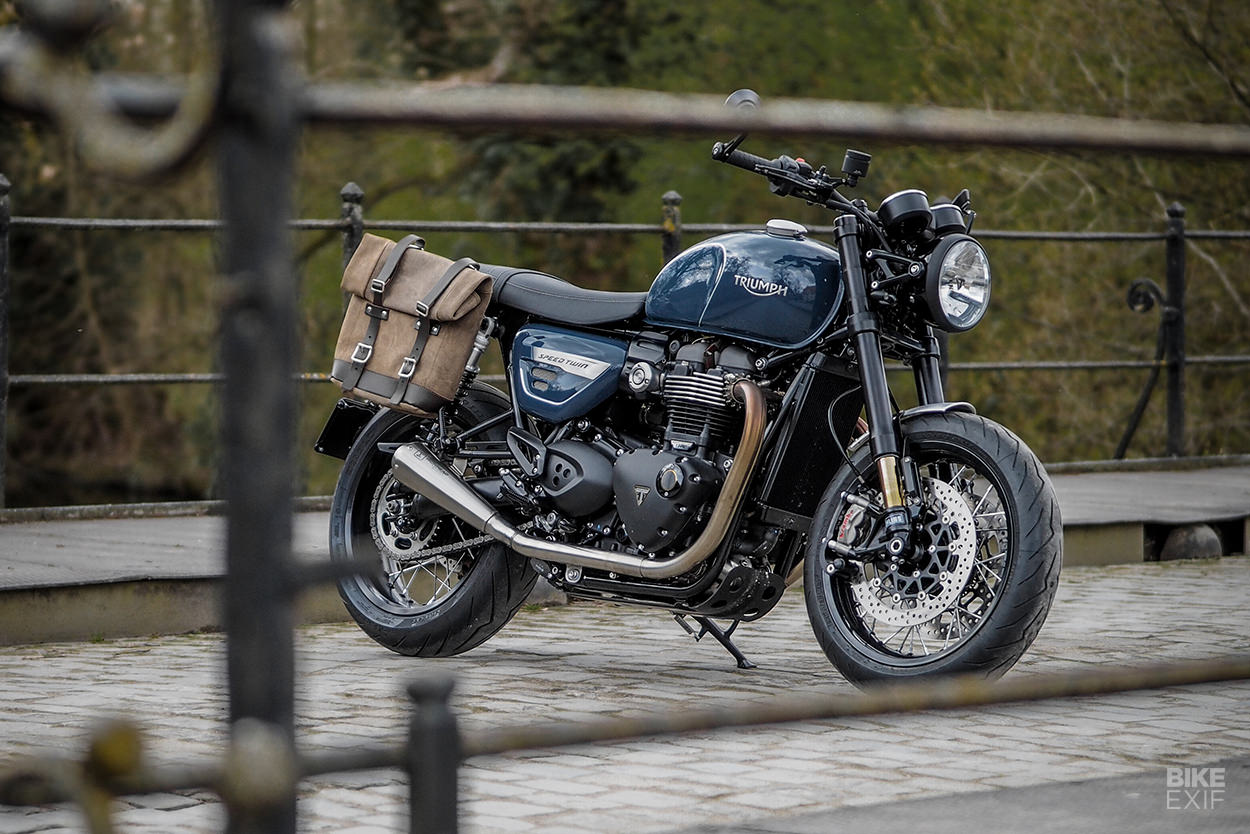 It’s the kind of bike we’d love to take on a long weekend trip, and it looks like Ram is thinking along those lines too. He’s installed a waterproof waxed suede pannier from Unit Garage, which comes with a quick-release subframe that fixes to the right side of the Speed Twin.

Despite this addition, Chris reports that the bike is around ten kilos lighter than stock, with a dry weight of 185 kilos (408 pounds). And with the engine tuning, performance will be edging into Speed Triple territory. Which has to be an intriguing proposition if you have 1200c modern classic in your garage … 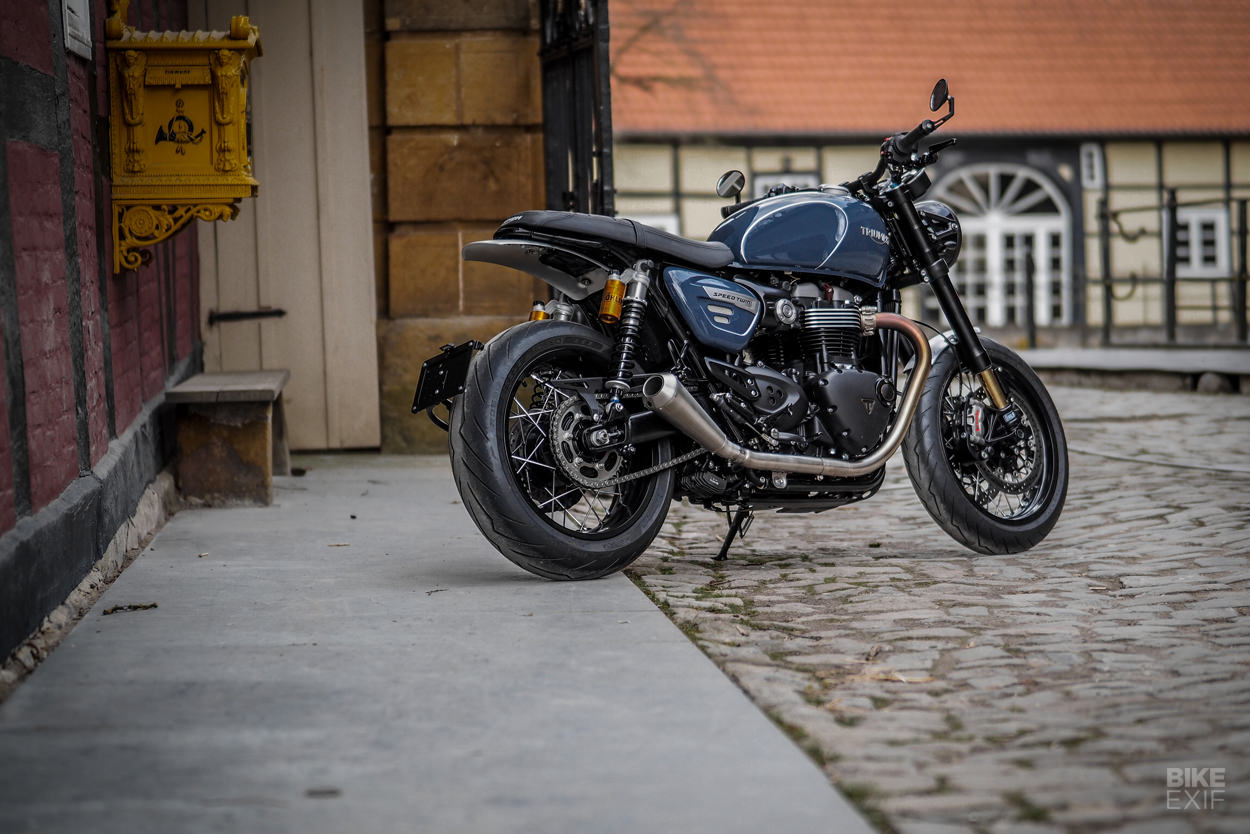