The Convert: Electrifying a Honda CB200 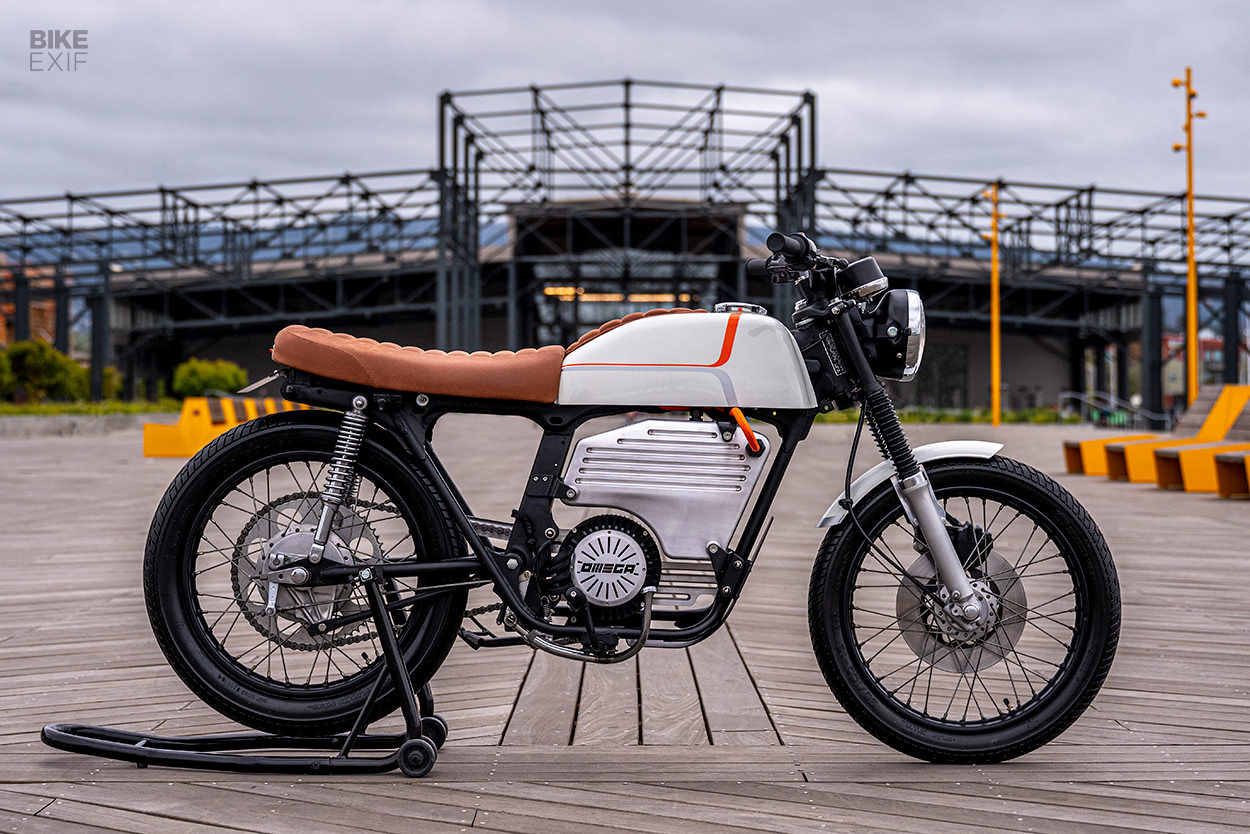 The growth of the electric vehicle market has sparked a new trend in the car world. Older vehicles like Land Rovers and VW Beetles are having their busted motors ripped out, and replaced by electric drivetrains. Since a car’s motor is hidden the conversion doesn’t ruin its looks—but on a motorcycle, everything’s on full display.

If you’re going to convert an old bike to electric, and you don’t want it to look scrappy, you need a more considered approach. This cute Honda CB200 from Omega Motors shows how to do it right. 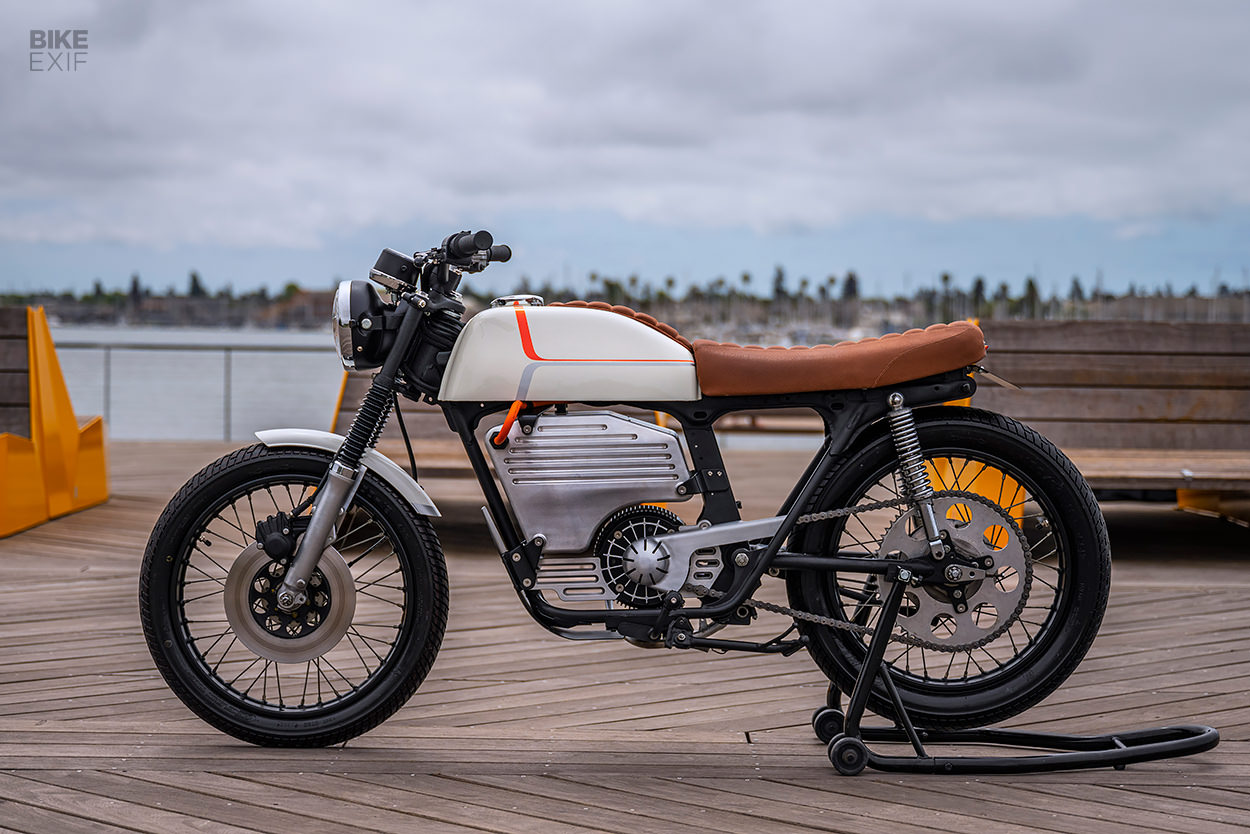 Omega Motors is a side-project for Nick Nieminen, James Hollis and Ian Iott. Nick and James used to work at the San Francisco e-bike company Monday Motorbikes, and after they left, started throwing around the idea of a ‘modern classic’ electric motorcycle.

Nick is in San Francisco, but James moved to Germany and Ian is based in Ohio. So the guys worked in small bursts when they could all get together, and remotely the rest of the time. It took them about three years to go from a bone stock 1975-model Honda CB200, to this: the Omega ‘EV200.’ 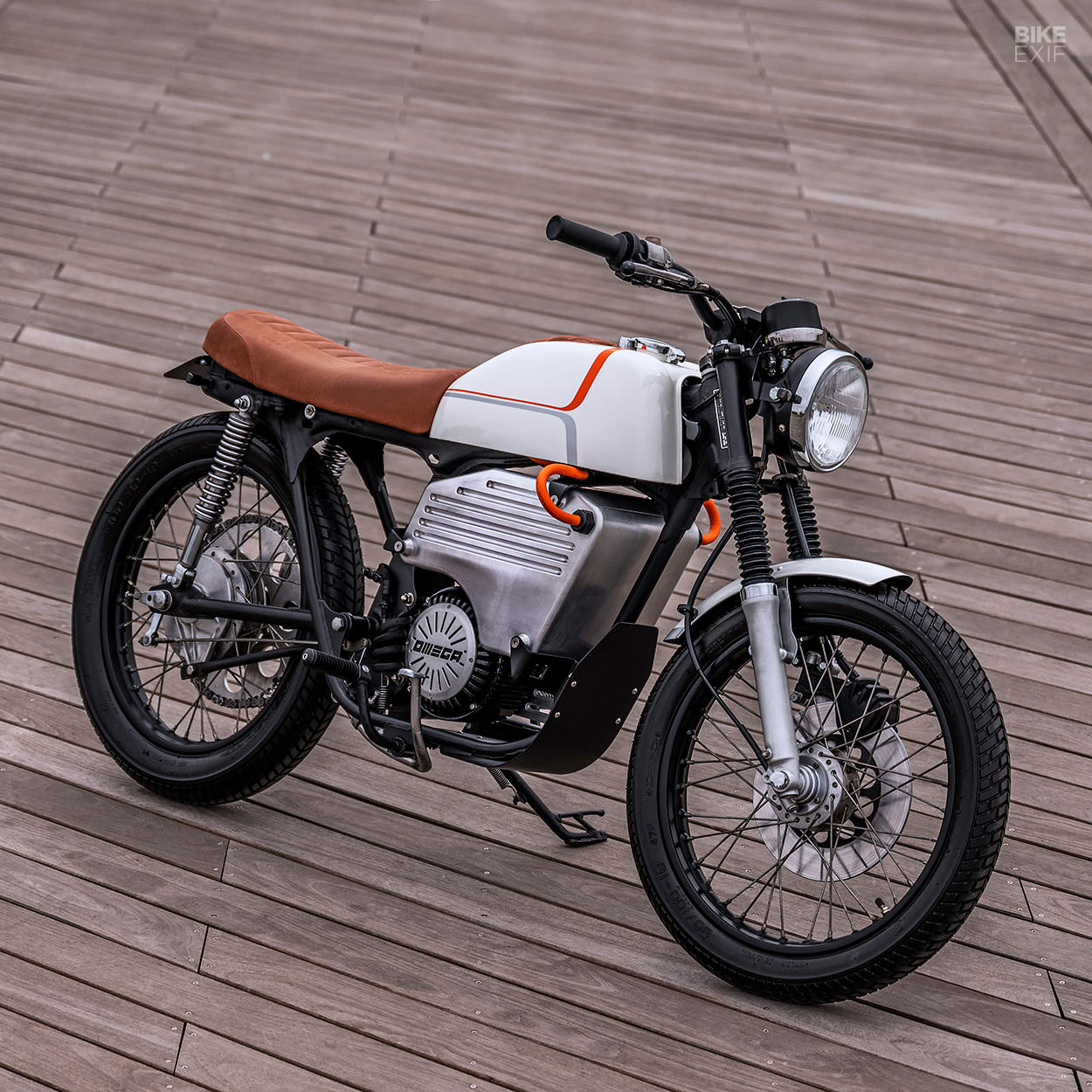 Nick and James had a lot of untested ideas from their time at Monday, so the project was a way of trying out stuff that wasn’t practical for a production bike. “We felt like many brands were taking the newfound design freedom of electric drivetrains a bit too far,” says Nick, “making bikes that had lost some of the motorcycle spirit that makes folks get nostalgic.”

“We wanted a bike that performs like a modern day electric vehicle, but inspires similar emotions to the motorcycles that we’ve grown to love—rather than a boxy, futuristic aesthetic.” 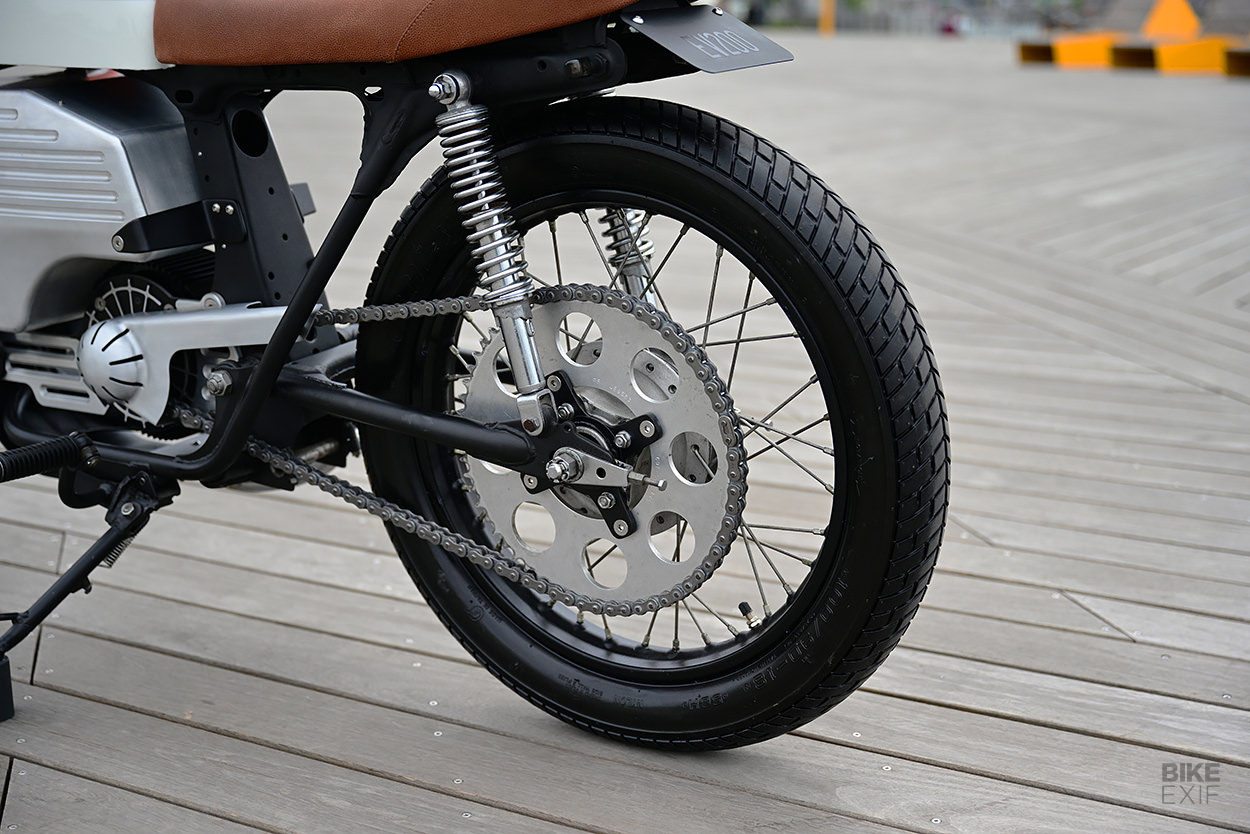 Keeping much of the original CB intact was central to the project. So the guys refurbished the Honda’s front forks, wheels and brakes, even retaining the cable-actuated front brake and rear drum brake.

The frame needed only subtle modifications. The team shortened it and removed the welded-in rear fender, cut off the passenger peg mounts, and cut a small bit out of the spine to weld in a mounting plate for the controller. Surprisingly, the original motor mounts are still intact—the new electric motor and battery are attached via a set of custom mounting plates. 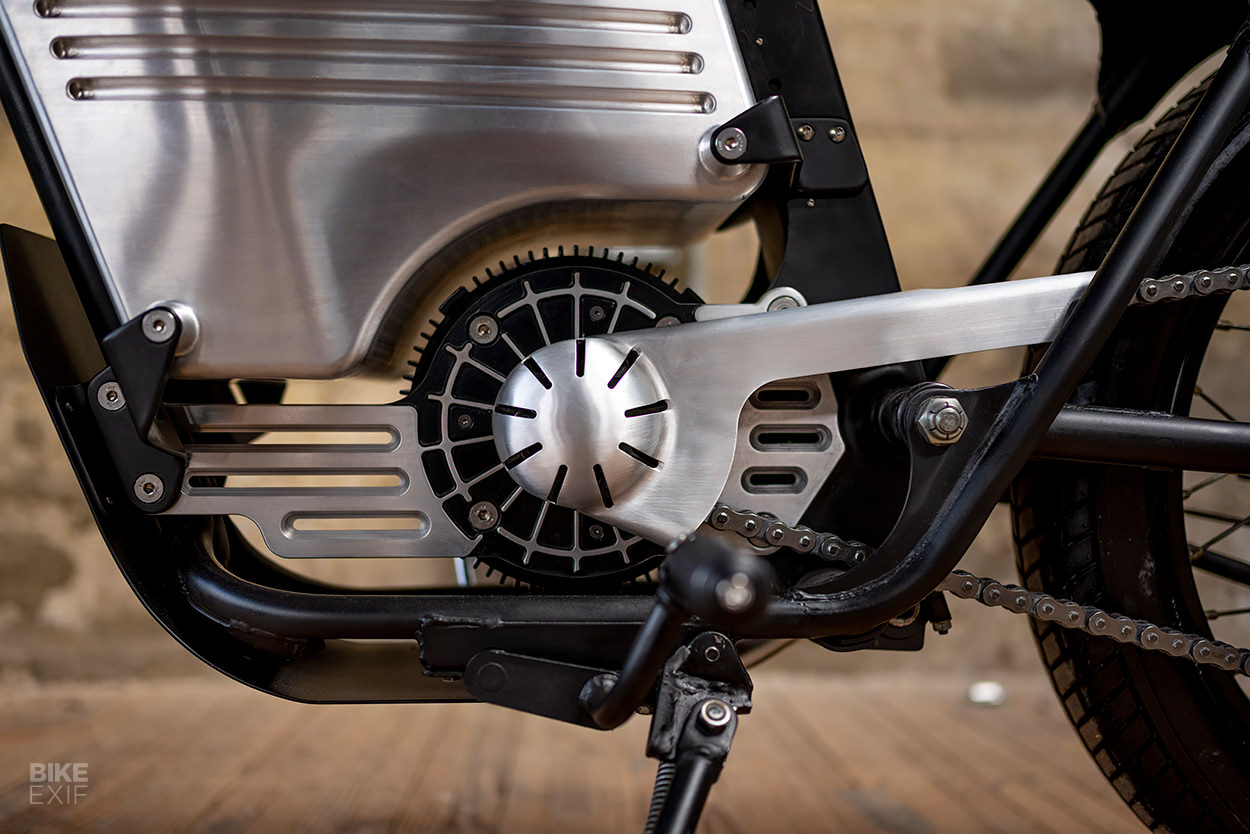 The motor itself is an off-the-shelf unit from Golden Motor, rated at 5 kW nominal / 10 kW peak power. Omega added a Kelly Controls controller, and made their own PCB. Those are all packaged under the seat and the modified fuel tank; the charge port is accessible via the gas cap.

At the heart of the bike is a 1.6 kWh battery pack, designed and built specifically for the EV200. “We had considered buying something off the shelf,” says James, “but the options for an appropriate pack back then were extremely limited. It was mostly small e-bicycle packs, or bulky kits for golf carts that would’ve made for a really underwhelming motorcycle experience.” 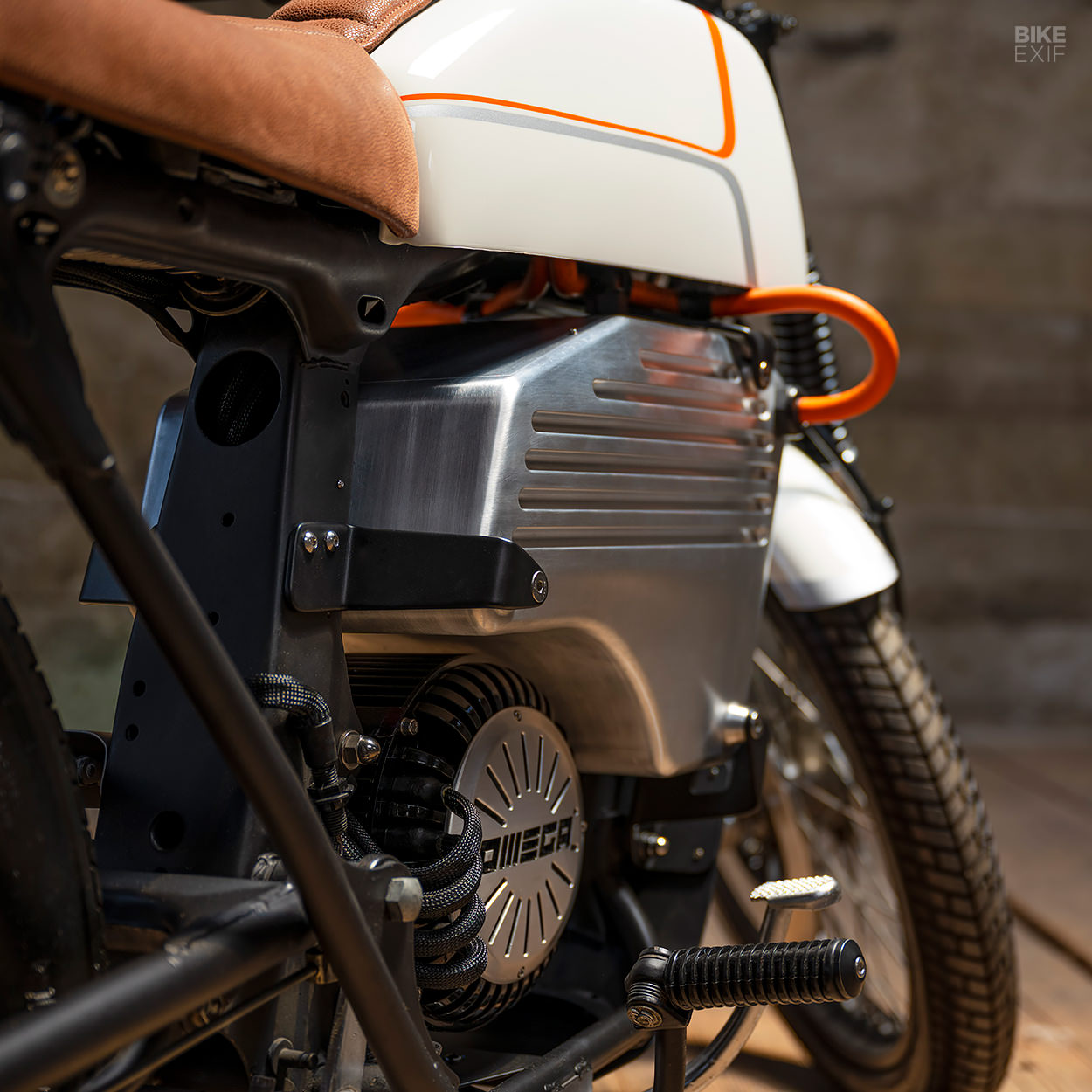 The idea was to build the battery as a quick-and-dirty proof of concept, but then the guys visited Jeff Tiedeken—who used to be a welder and fabricator at Roland Sands Design. Jeff saw potential for more, so he helped the guys fabricate the stylish aluminum enclosure you’re looking at here.

That inspired the guys to go to town on the finishes for the EV200. It ended up with a crisp white livery on the fuel tank, and bright orange cables to mimic the spark plug cables on older bikes. Up top, the original seat was trimmed down, then recovered in brown leather. 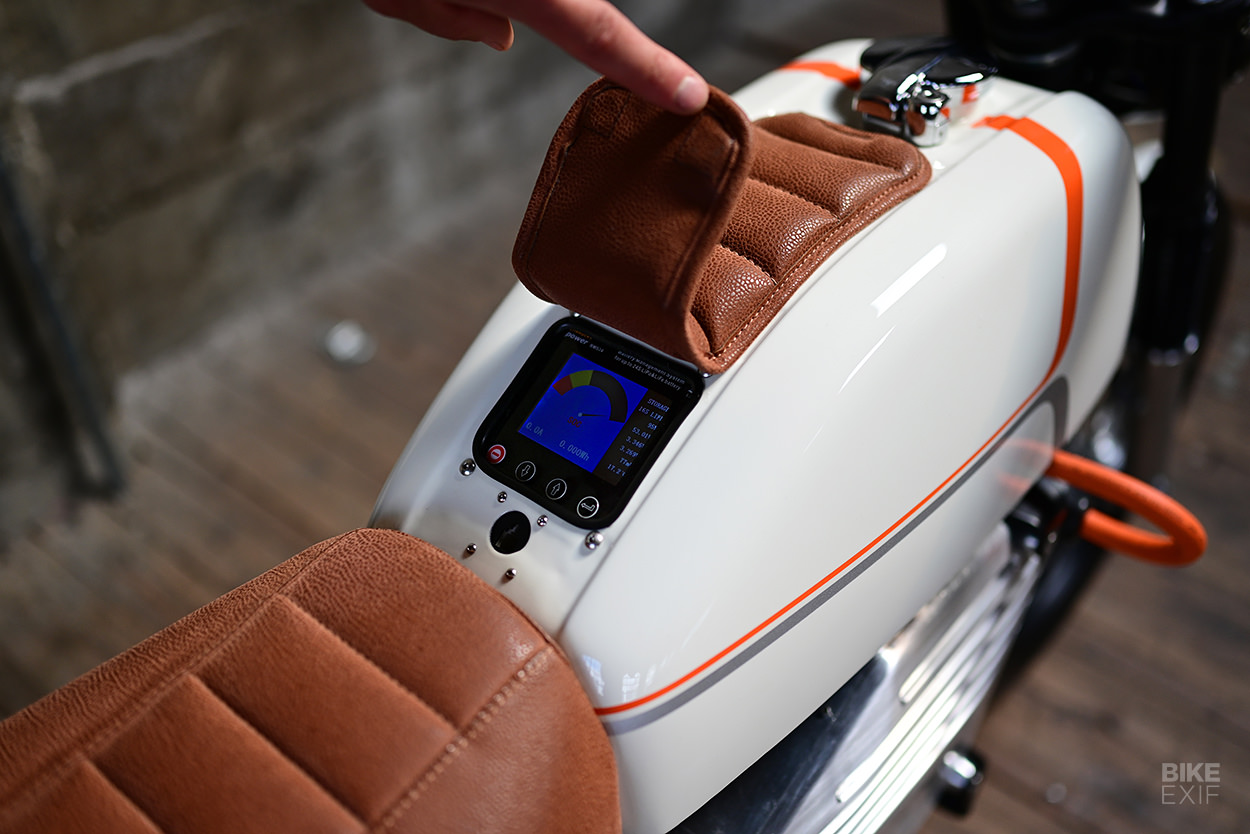 The same leather’s been used on the custom tank pad, part of which lifts up to reveal the battery display screen. But there aren’t any visible digital things—Omega rewired everything to work with the original speedo and switches, and even repurposed the clutch lever as an analog regenerative braking control.

“Keeping the original switches was actually a major pain in the ass, and a bit of wiring nightmare,” admits Nick. “But we thought it was an important touch point for this kind of reinvigorated retro vibe.” 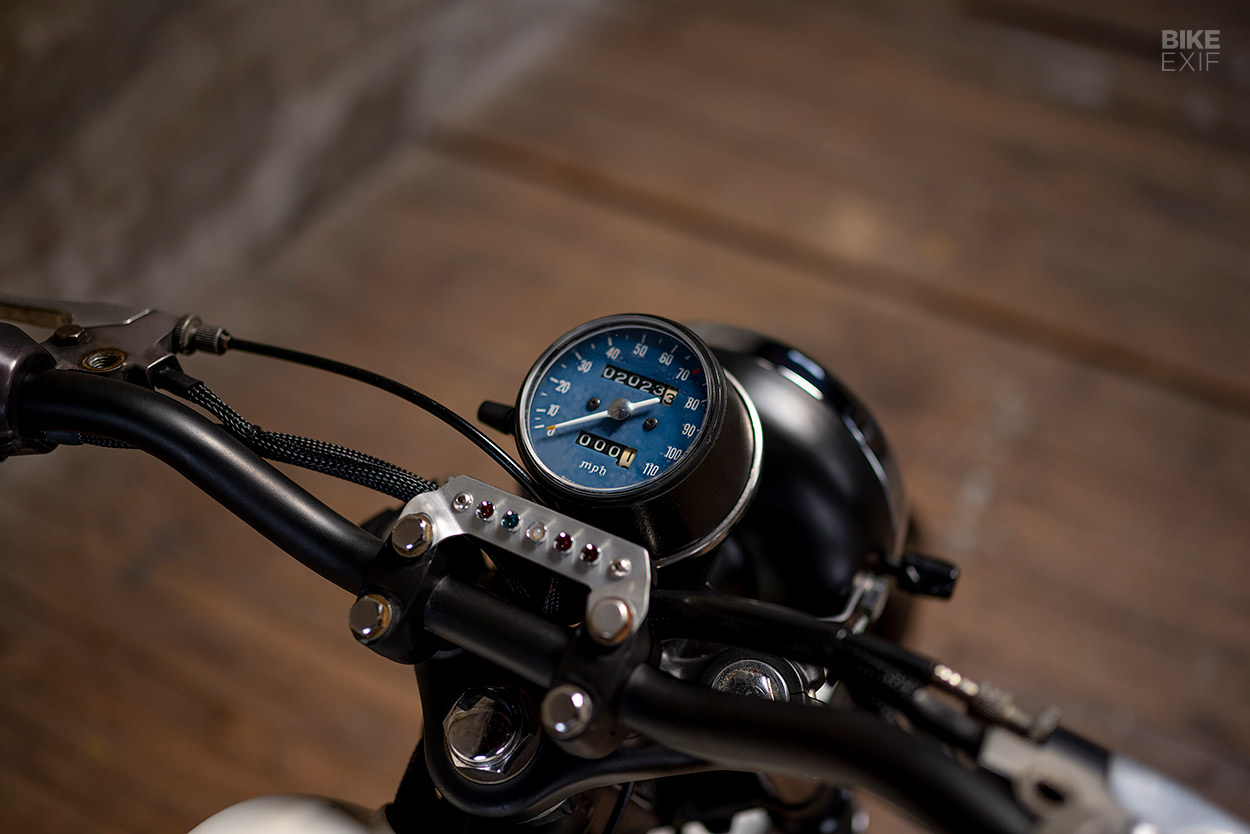 As for the numbers, they’re modest—but the guys are still dialing in the settings, and were never aiming for eye-watering performance here. Top speed is currently 60 mph, with a range of 30 miles and a charge time of five to eight hours. But the EV200 weighs only 245 pounds, which is 22% lighter than a stock CB200.

The powertrain is configured to peak at 200 amps, a play on the bike’s original 200 cc displacement. “The CB200 was always a small bike,” says James, “so the powertrain of the EV200 was intended to match that around-town use case. The battery is as much as you need for an urban bike without weighing it down, and currently it’s geared more for torque than top speed.” 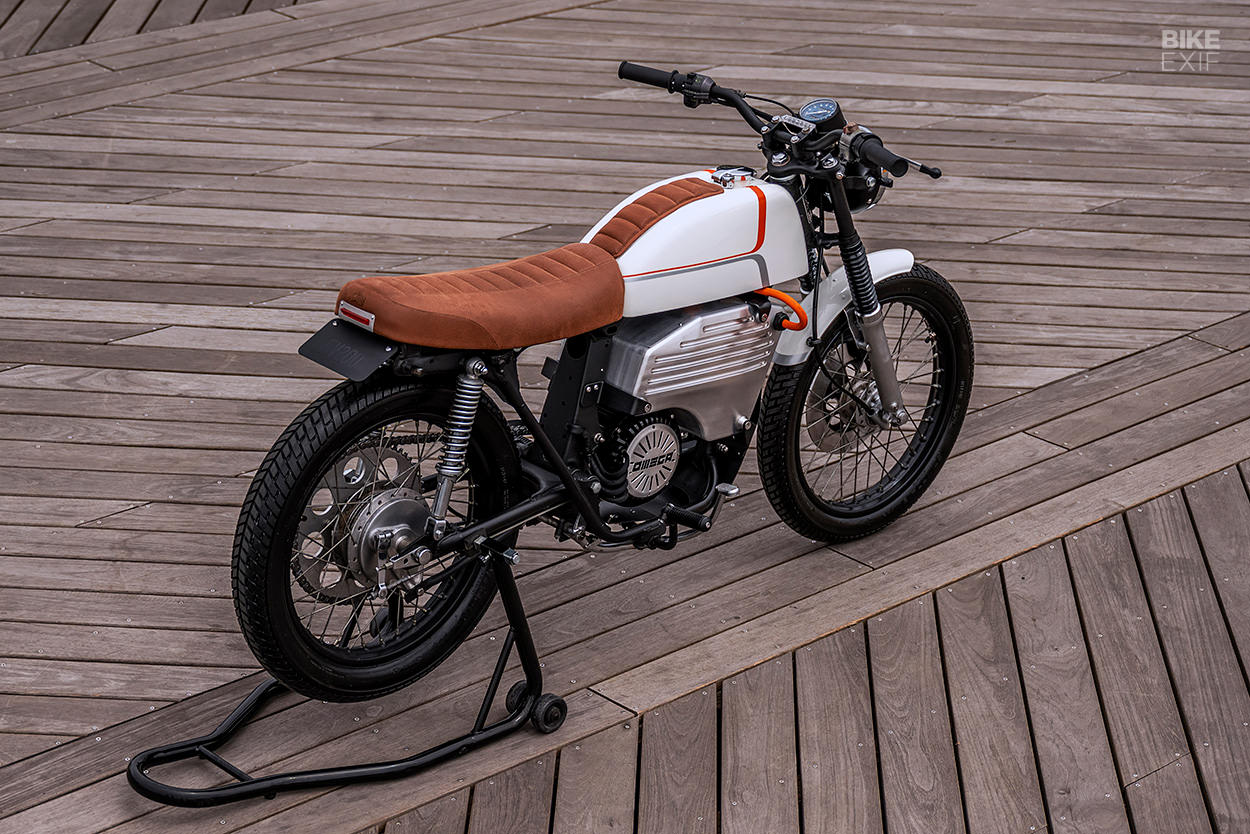 The EV200 is a fascinating design and engineering study, a great first project, and a handsome custom bike to boot. The team’s already working on the next logical step: conversion kits, or at the very least, partial kits for custom fitment. Just the ticket for anyone with a classic in the garage with a blown motor, wouldn’t you say? 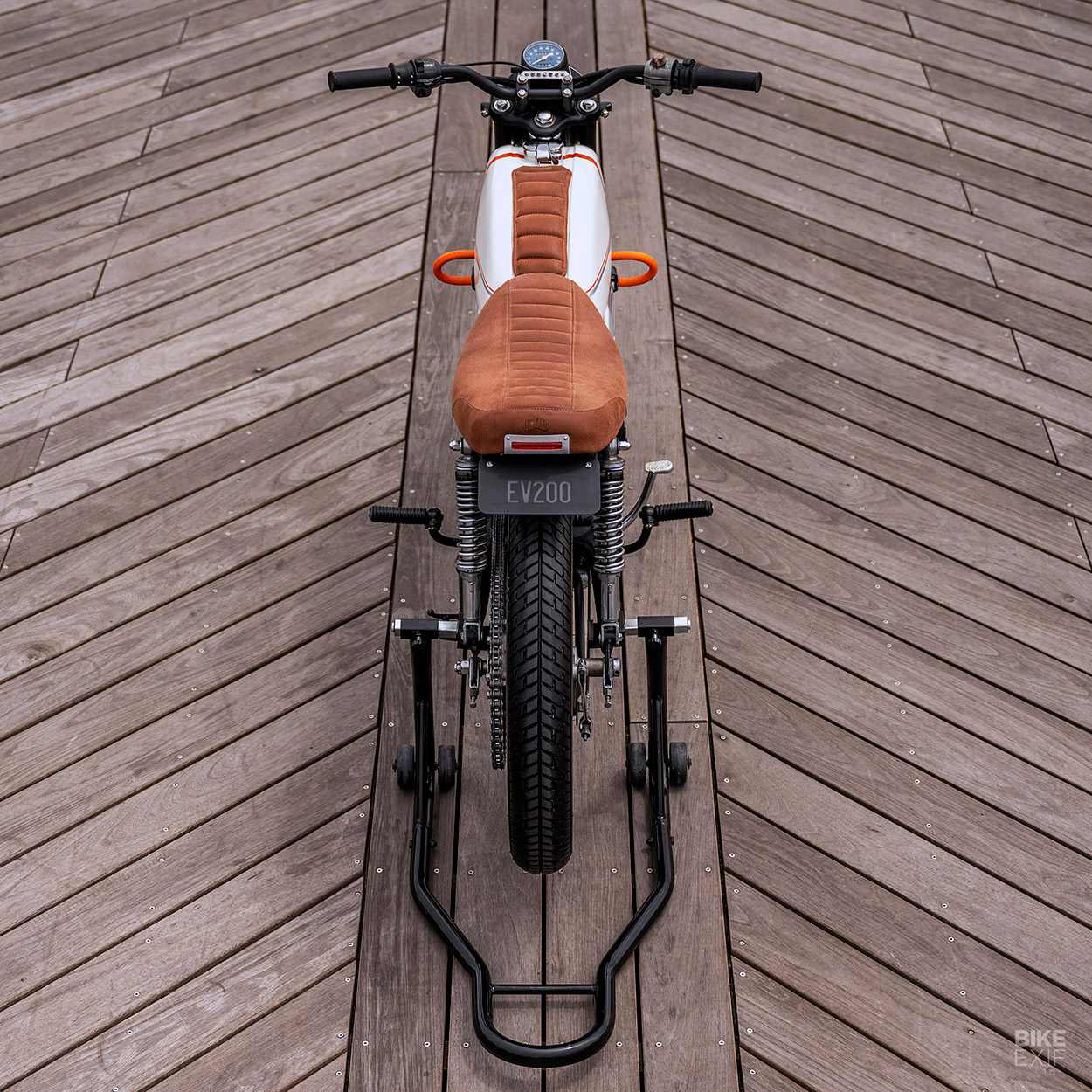