The right kind of hybrid: A genre-bending Triumph Bobber 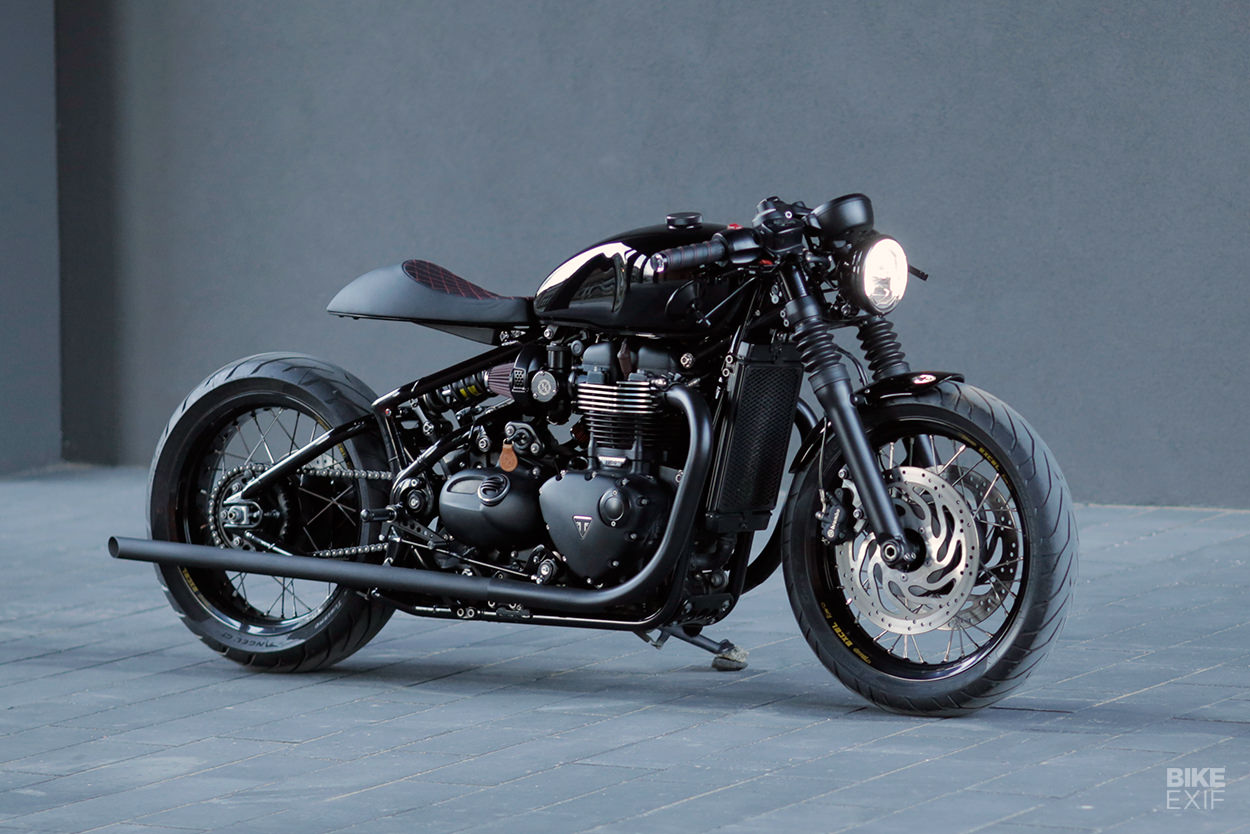 There’s an increasing trend of genre-hopping happening in the custom scene at the moment. Ten years ago, you’d occasionally see Sportsters turned into dirt bikes, or roadsters into scramblers. Nowadays, anything is fair game—like this Triumph Bobber with a strong café racer flavor.

It comes from Grzegorz Korczak of Poland, who has a reputation for unusual builds: in recent months, his Wroclaw-based workshop Unikat Motorworks has revealed a radical Yamaha TMAX scooter and a ten-speed Honda CB900C. 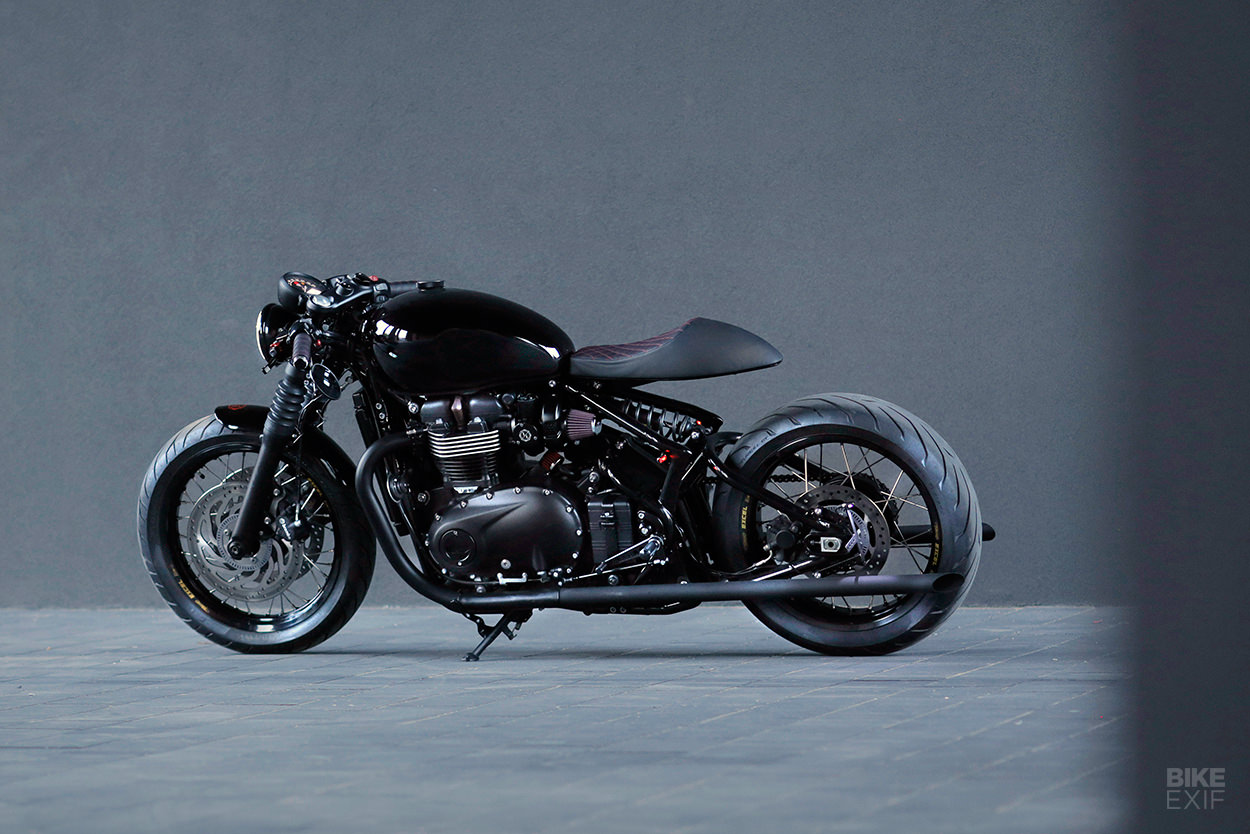 “When Triumph launched the Bobber in 2016, I immediately printed out a side view,” says Grzegorz, “and sketched out a floating/hanging cafe seat and long exhaust pipes.”

“It was a ‘love at first sight’ situation. And ever since, I’ve waited for a client to order such a project, but nobody was able to imagine it. So I asked Triumph Poland for a deal on a Bobber. Our job is to build our clients’ dreams, but we’ve got to build our own as well, from time to time.” 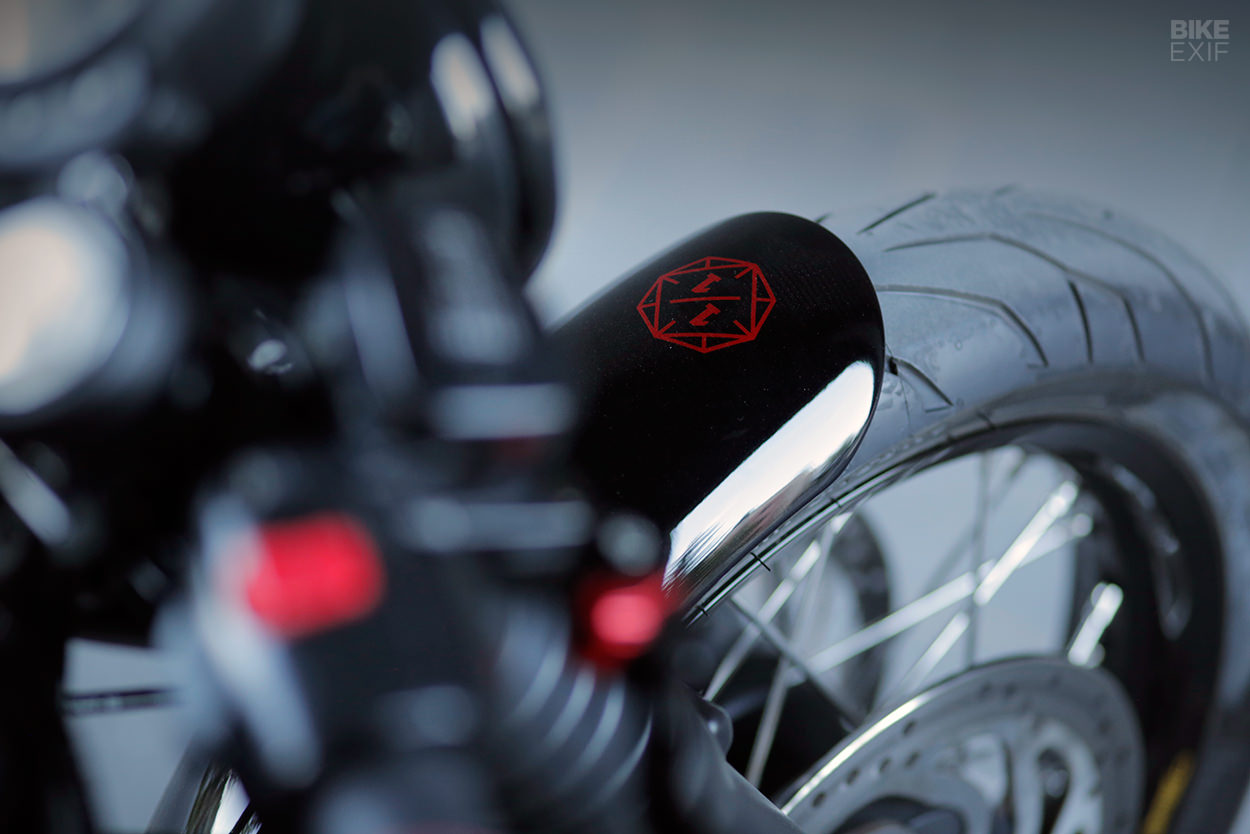 When the Triumph Bobber arrived in his workshop, Grzegorz anticpated an “easy and fast build.” But that soon proved to be a tad optimistic, especially since he wasn’t prepared to compromise his vision or choose half-assed solutions.

Even something as simple as changing the wheel sizes caused problems: “It’s not that easy with modern bikes, as every model has changes in the hub designs, number of spokes, offsets and more. Finally, some friends in Italy made the wheels for us—with 18-inch rims, as retro cafe racers should have.” 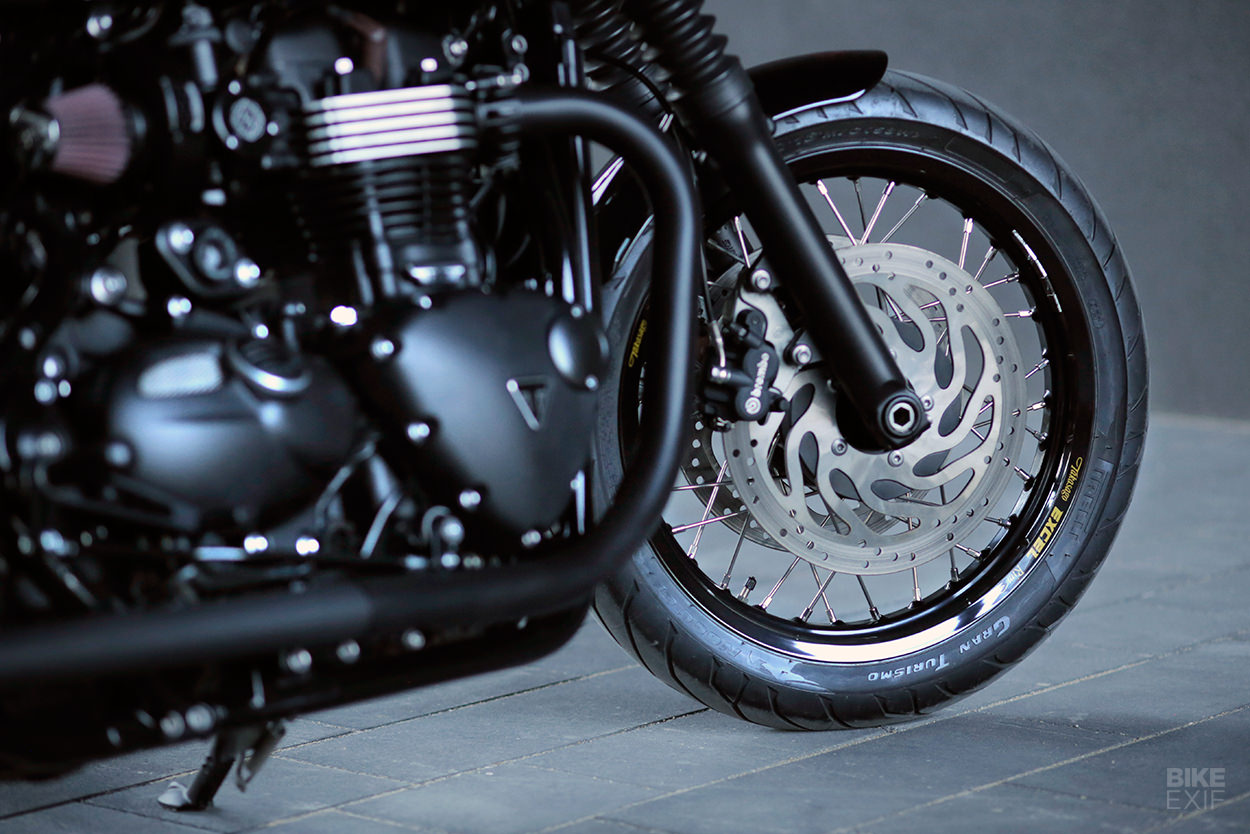 The rims are Excel Takasago aluminum alloy items, fitted with a BARTubless system—a polymer rubber band that seals the rim to make it airtight. The tires are Pirelli Angel GT, a high performance sport touring compound.

To get even more of a café vibe, Grzegorz has replaced the usual tractor-style bobber seat with a ‘floating’ humped seat unit. There’s a custom hidden subframe underneath, and the upholstery is classic black leather with red stitching. 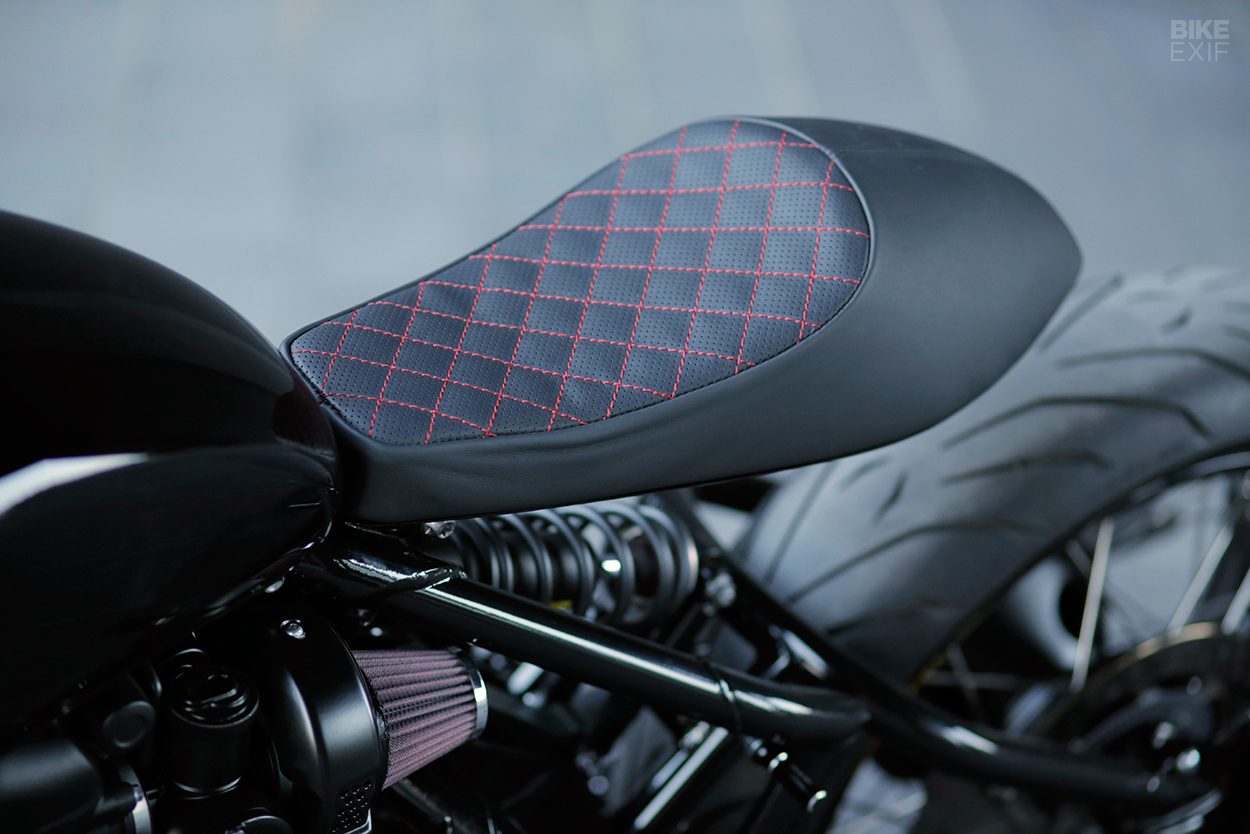 It’s an extremely minimalist effect that would be ruined by large lights, so Grzegorz has fitted EU approved Highsider 3-in-1 LEDs, which have both stoplight and blinker functions. (Off to the side, lower down, is an equally discreet license plate holder with a mini LED light.)

“I wanted this bike be to be clean as possible, so took a lot of time to mount the lights in a smart place,” says Grzegorz. “It’s hard to combine design and function and make it road legal.” 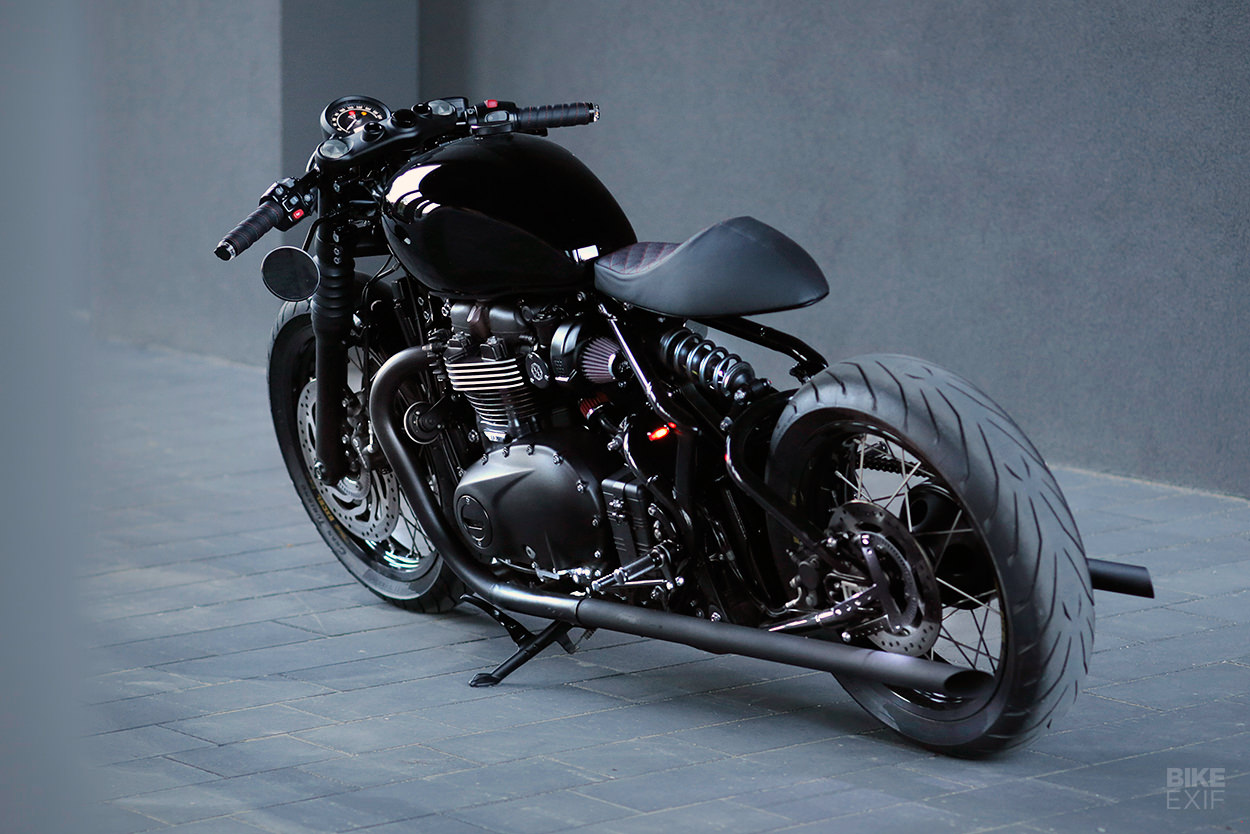 The engine in the Bobber is a pearler in stock form: an 8-valve, SOHC parallel twin with a hefty 78 lb-ft of torque, and a pleasing rumble thanks to the 270° crank angle.

Unfortunately the factory exhaust system is pretty hefty too, with a long and fat muffler running from the primary cover to almost the rear axle. So Grzegorz has cut off the muffler, and extended the header pipes in a straight line, right back to the rearmost edge of the tire. Yes, it’ll be loud—but hopefully not MotoGP loud. 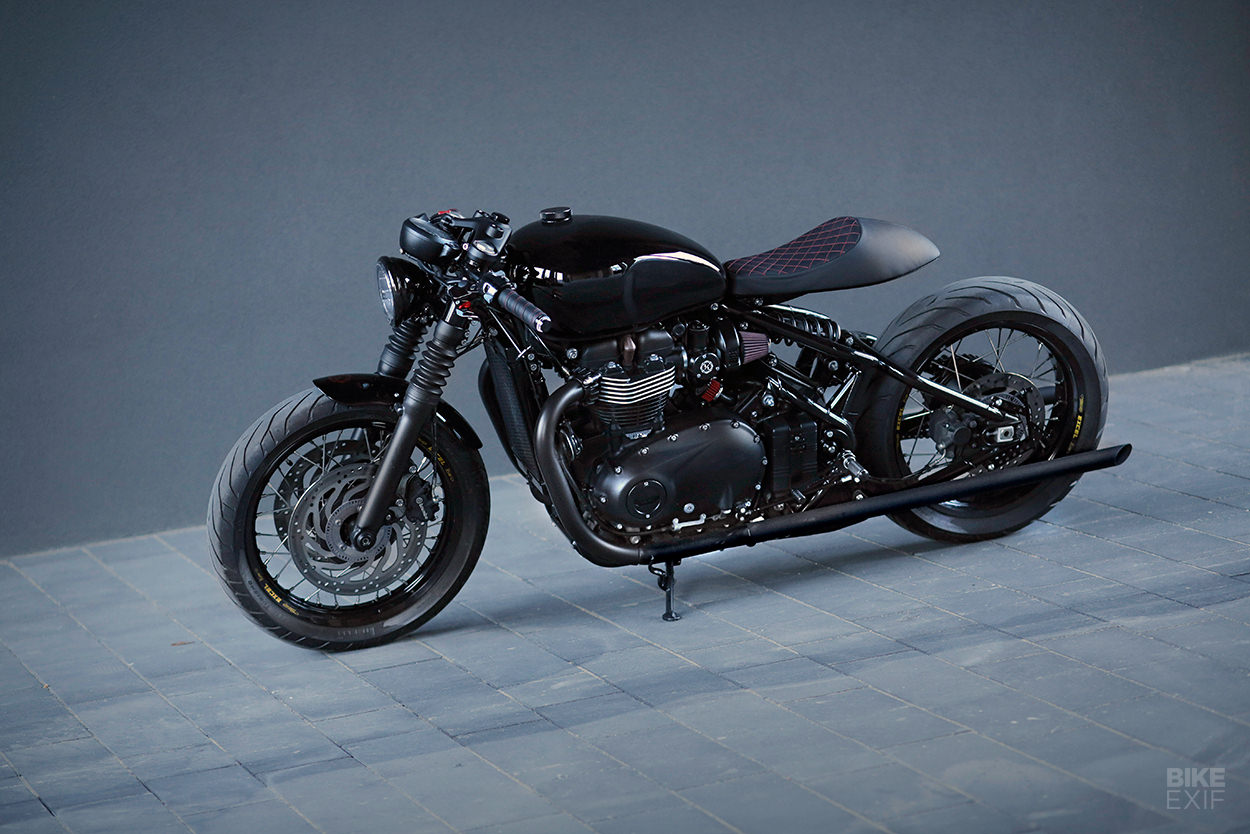 On the intake side, the airbox is now gone and replaced by K&N filters for a classic look.

The standard Bobber foot controls are much further forward than any other Bonneville variant. So Unikat have fabricated custom rearsets bolted onto the frame under the seat, rather than under the tank, to avoid trips to the chiropractor. 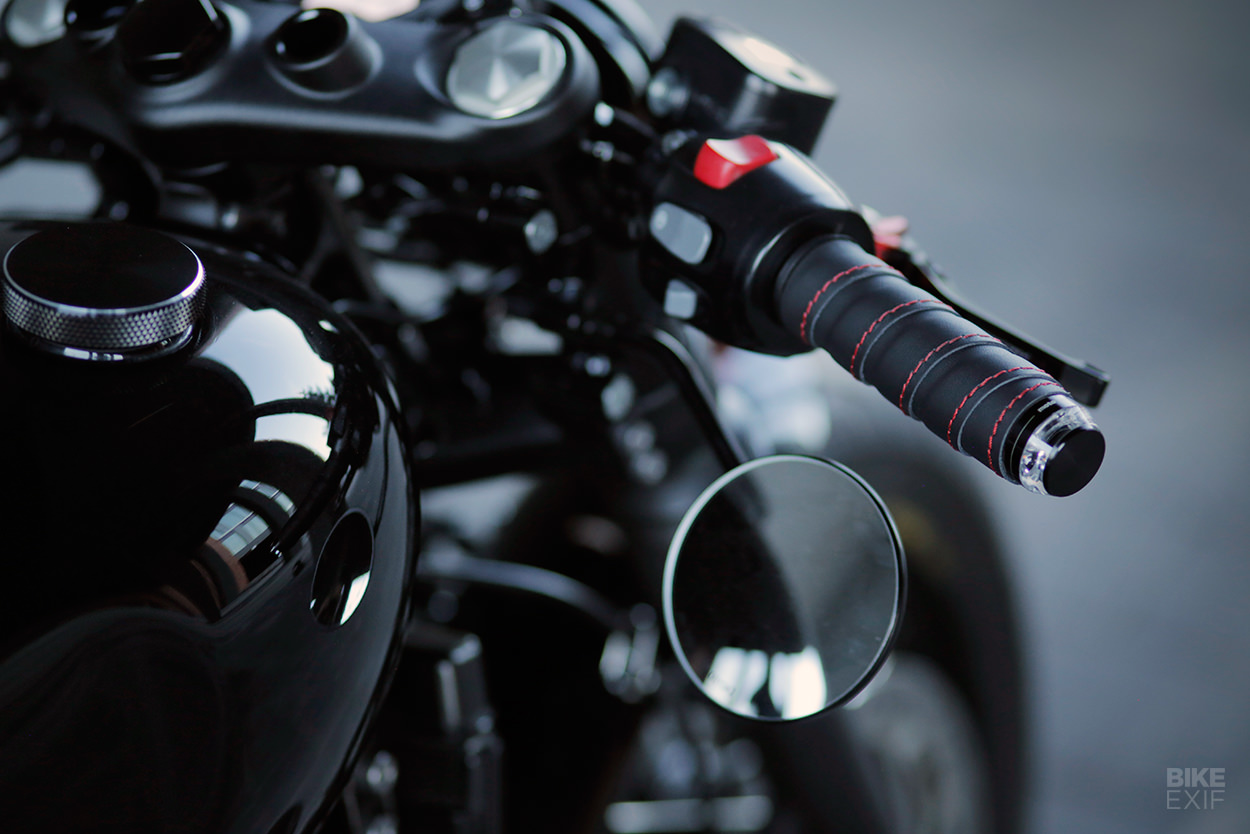 At the other end of the rider triangle are custom-made clip-ons with Motogadget bar-end blinkers and custom-stitched leather grips. Under those grips are compact mirrors mounted on custom struts; the brake and clutch levers are from the Polish company Womet-Tech.

The speedo and headlight have been lowered to give the front end a tighter look, with extra cleanliness coming from a cable tidy-up. In-house fabrication includes fork covers, alongside a neat front fender to match the curvature of the new wheel. 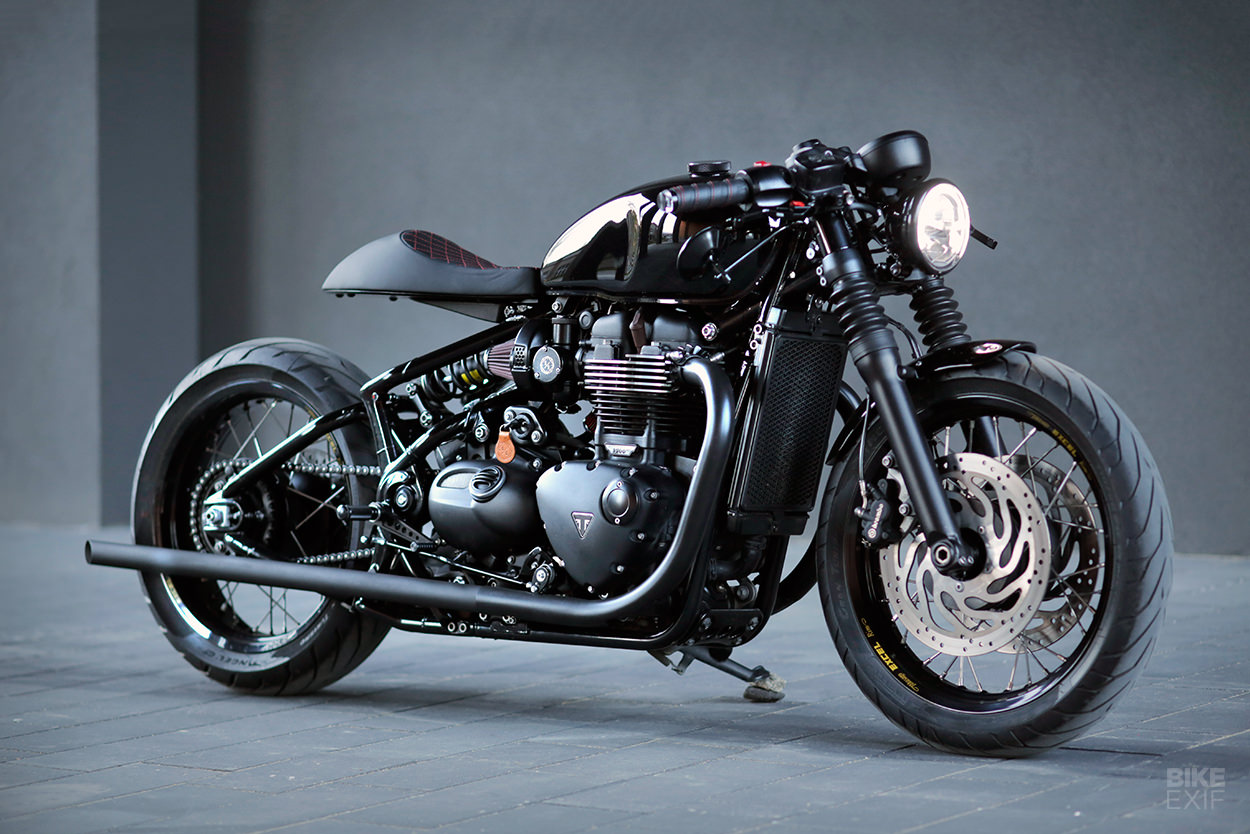 There are too many other smaller details to mention here, but the 130 man-hours of labor also encompassed blacking out some of the shinier components on the stock bike, CNC-milling and anodizing a custom gas cap, and installing a blacked-out drive chain. This is one of those bikes that will bear close inspection.

It’s also one of only two bikes that Unikat will build this year that are not client commissions, and Grzegorz is justifiably proud of it. “It’s the purest modern cafe racer we have built,” he says. If you share his enthusiasm, hit him up and you might just be able to put it in your own garage. 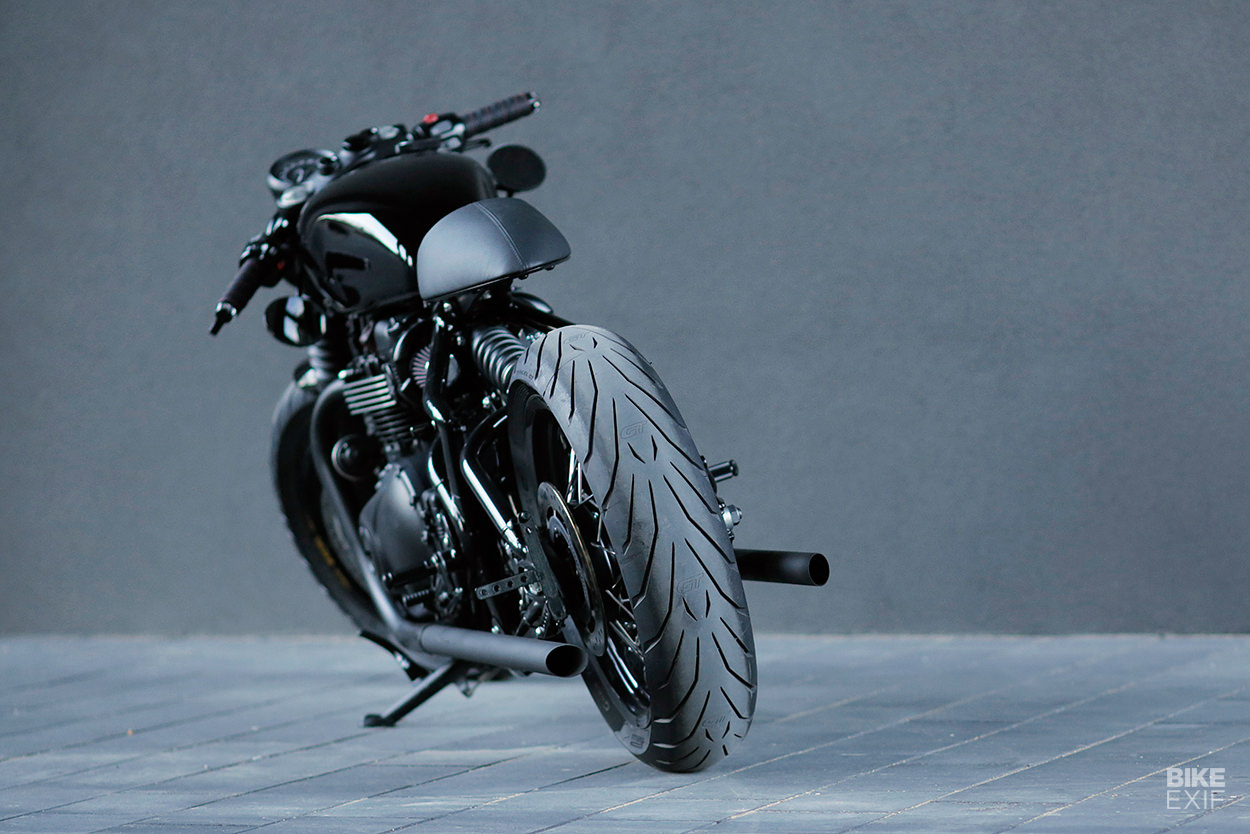