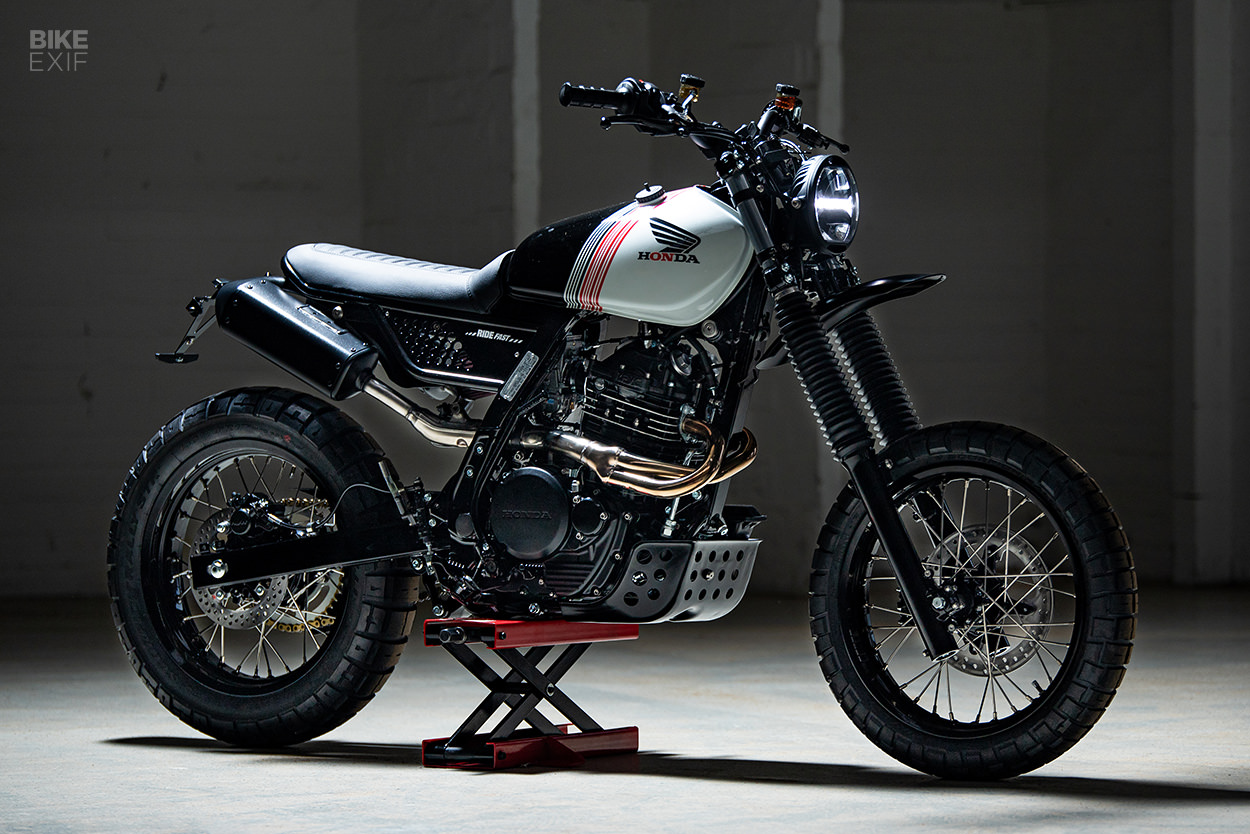 The sequel is seldom as good as the original movie, but the opposite is usually true with custom motorcycles. Taking another crack at a particular platform or genre is a golden opportunity to fine-tune your recipe, or try new things. And if you need proof, Holger Breuer’s latest project offers compelling evidence.

It’s based on the venerable Honda NX650 Dominator—and like the Dominator Holger built roughly a year ago, it’s a street scrambler with supermoto underpinnings. The two bikes are quite clearly cast from the same mold, but this new iteration is laden with subtle differences that make it shine just a little bit brighter. 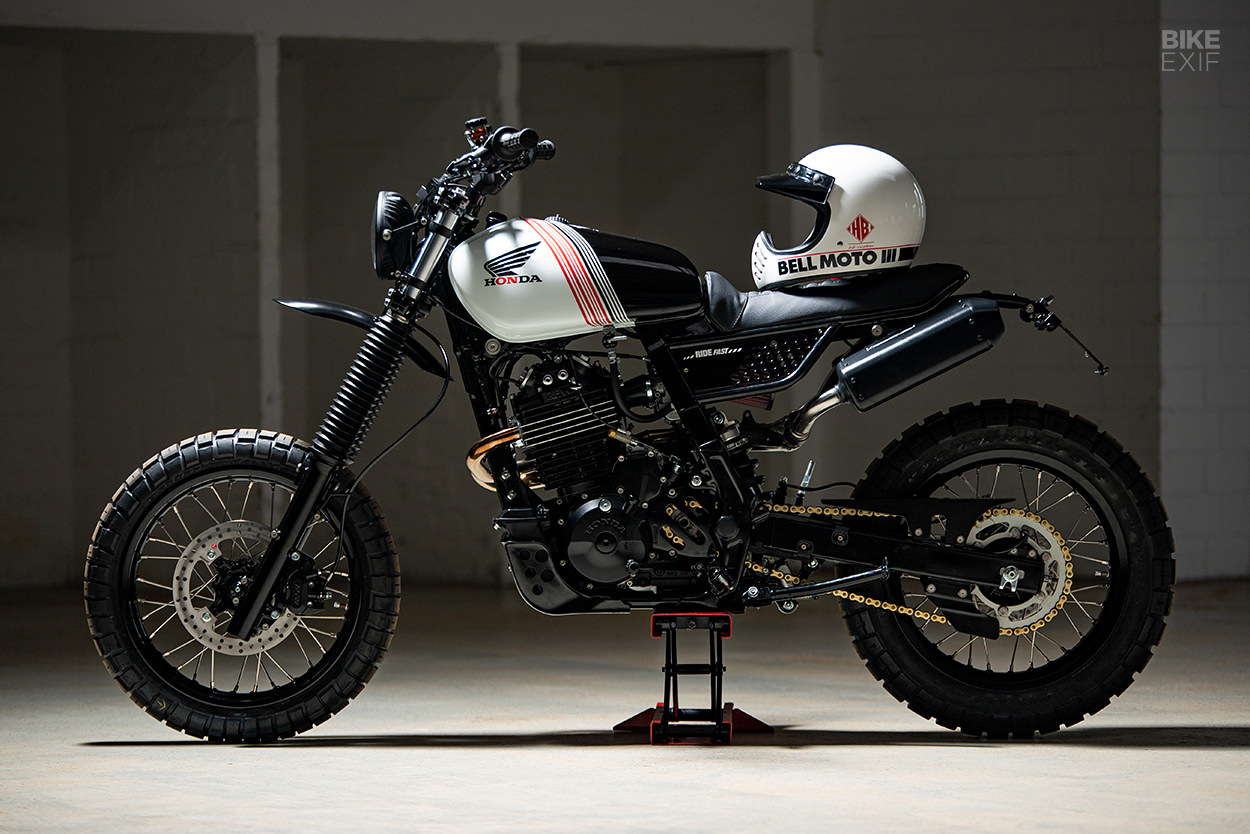 Holger, who operates as HB-Custom from his workshop in Husum, Germany, built the first Honda for a customer. But this one was a house build, and a chance to tailor every last detail to his own taste.

“I decided to build the bike based on my own ideas and thoughts,” he says. “The response to my last NX built was so positive, that I decided to go this way. I am quite sure that I will find a customer for the bike—the first offers are already there.” 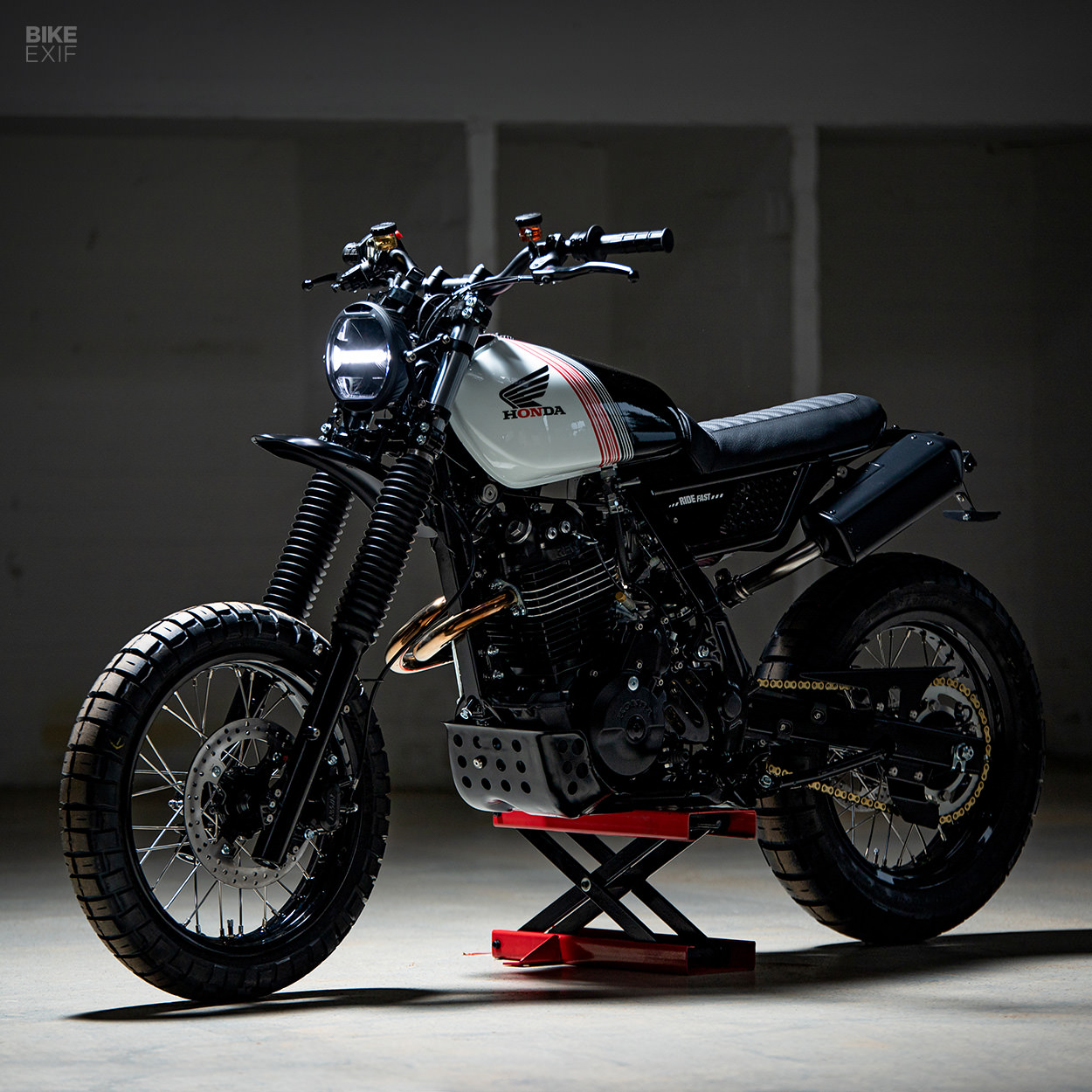 Holger started with a 1988-model donor, and almost immediately ran into problems when he discovered a crack in the frame. He managed to find another NX650 frame from the same year, but this one had a leak in the integrated oil reservoir. “This problem I could fix on my own,” he quips.

With the frame transplanted sorted, Holger moved onto the next issue: the bike wasn’t running too great. 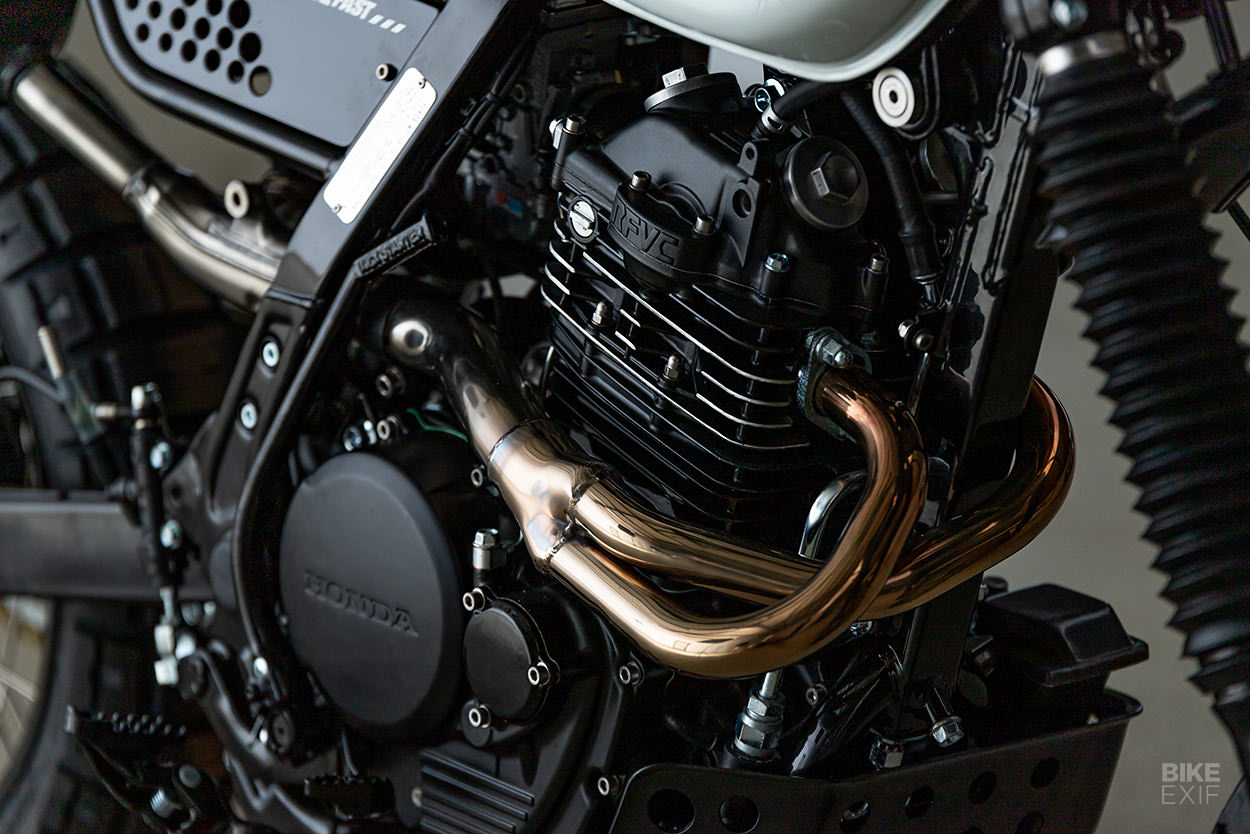 First on the list was a motor rebuild, with new rings, valves, bearings and a timing chain. The ignition and carb were beyond saving, so Holger installed a new electronic ignition, and a Mikuni TM40 carb with a K&N filter. Then he went a little overboard, and ditched the 33-year-old clutch in favor of a hydraulic system from Magura.

The exhaust system was pieced together from modified Honda CRF250 and XR600 parts. The way the twin mufflers flank the seat echoes the Dominator’s original design, but it looks exponentially more rowdy. 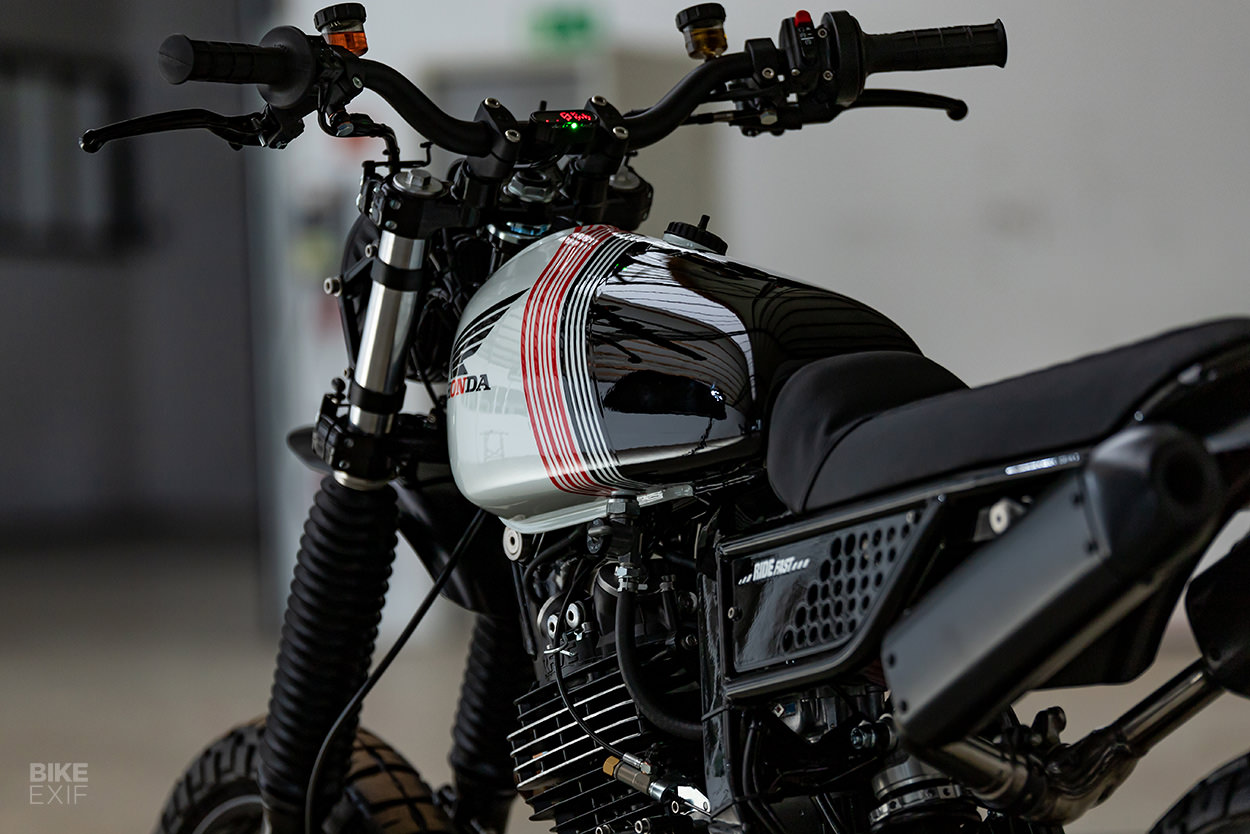 All of the Dominator’s plastic bodywork is now gone, with a repurposed Yamaha XT500 tank taking center stage. Holger welded new mounts in to match it to the frame, then relocated the fuel tap hole and fitted the petcock from an old BMW boxer. The arrangement works so well, it looks factory-fitted.

Just behind the tank are a new seat and subframe. Holger’s subframe changes on the last Dominator were gentle, but this one’s a completely scratch-built setup. The lines here are flawless; note how the base of the tank and the subframe run parallel to each other, overlapping rather than connecting. 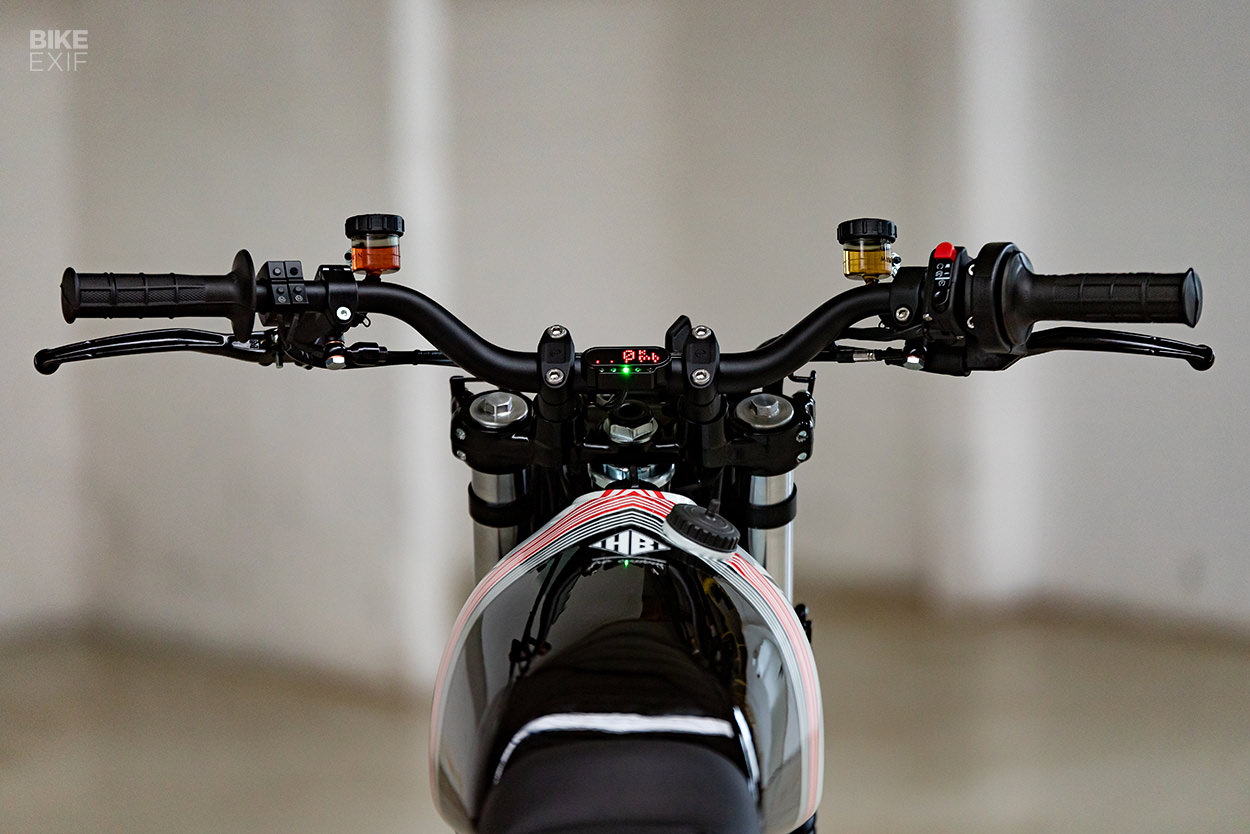 Out front is a punchy Koso LED headlight, mounted on custom brackets. The bars, throttle, brake and clutch controls are all from Magura, and there are new grips and micro switches too. A tiny Motogadget speedo rounds out the cockpit spec.

Lower down you’ll find a set of 17” wheels, shod with Pirelli Scorpion tires for a healthy balance of tar and dirt grip. The rear shock’s been upgraded to a YSS unit, and there’s a Lithium-ion battery to help keep the weight down. 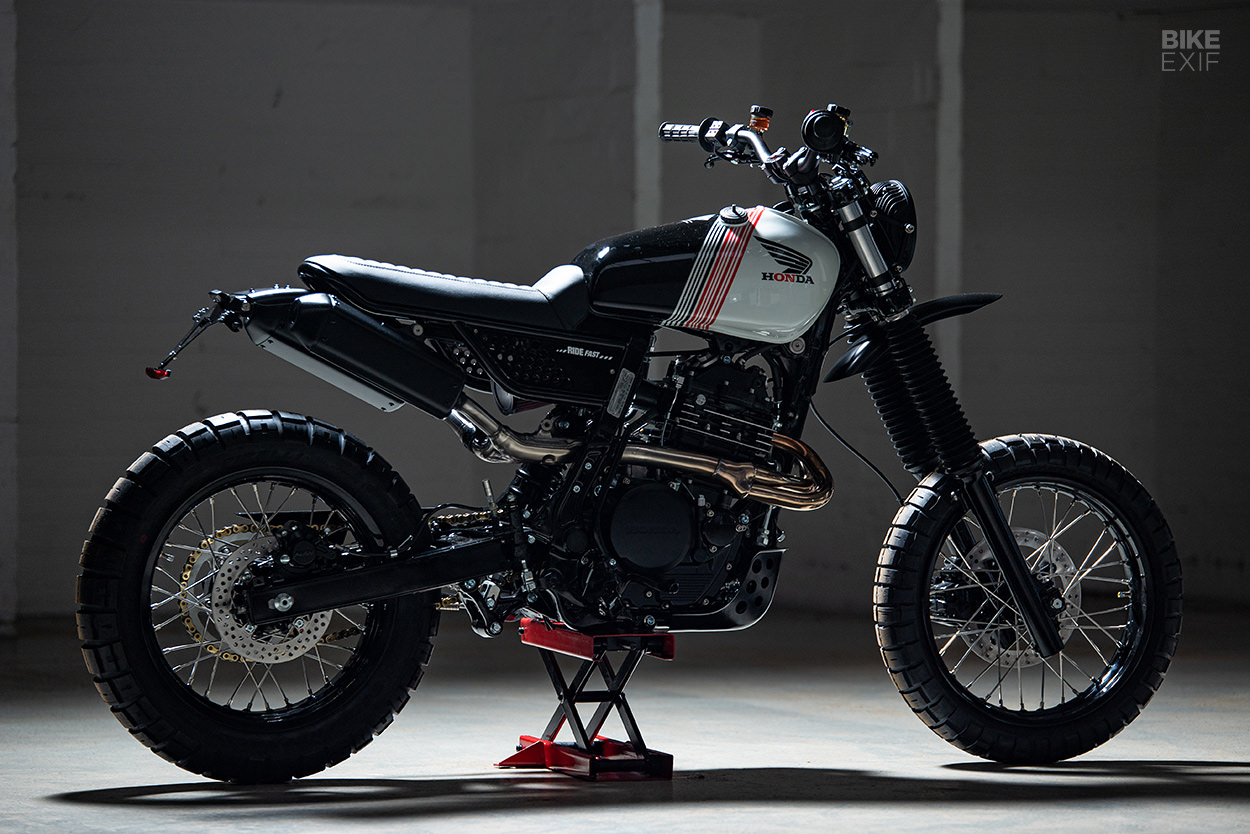 Finishing touches include a set of perforated aluminum side covers, and stubby fenders at both ends. The tail ends in a license plate bracket that also hosts a pair of LED taillight and turn signal combos.

Holger was already onto a good thing with his first Dominator, but he’s truly elevated his game with this follow-up. It looks like a wild ride too, so we’re betting he’s going to miss it when he sells it. A great excuse to build a third? 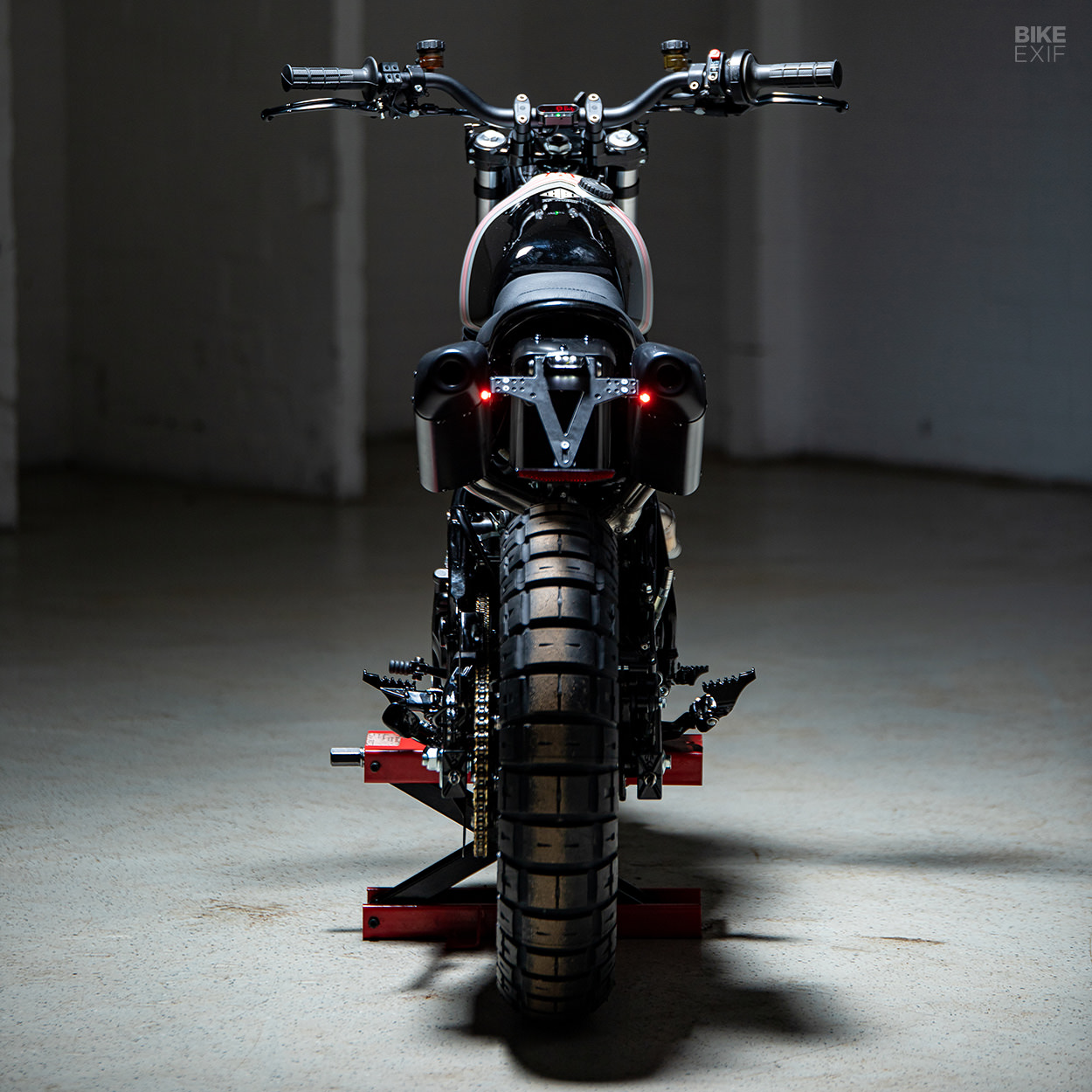