The Survivor: A Harley Sportster hardtail by MB Cycles 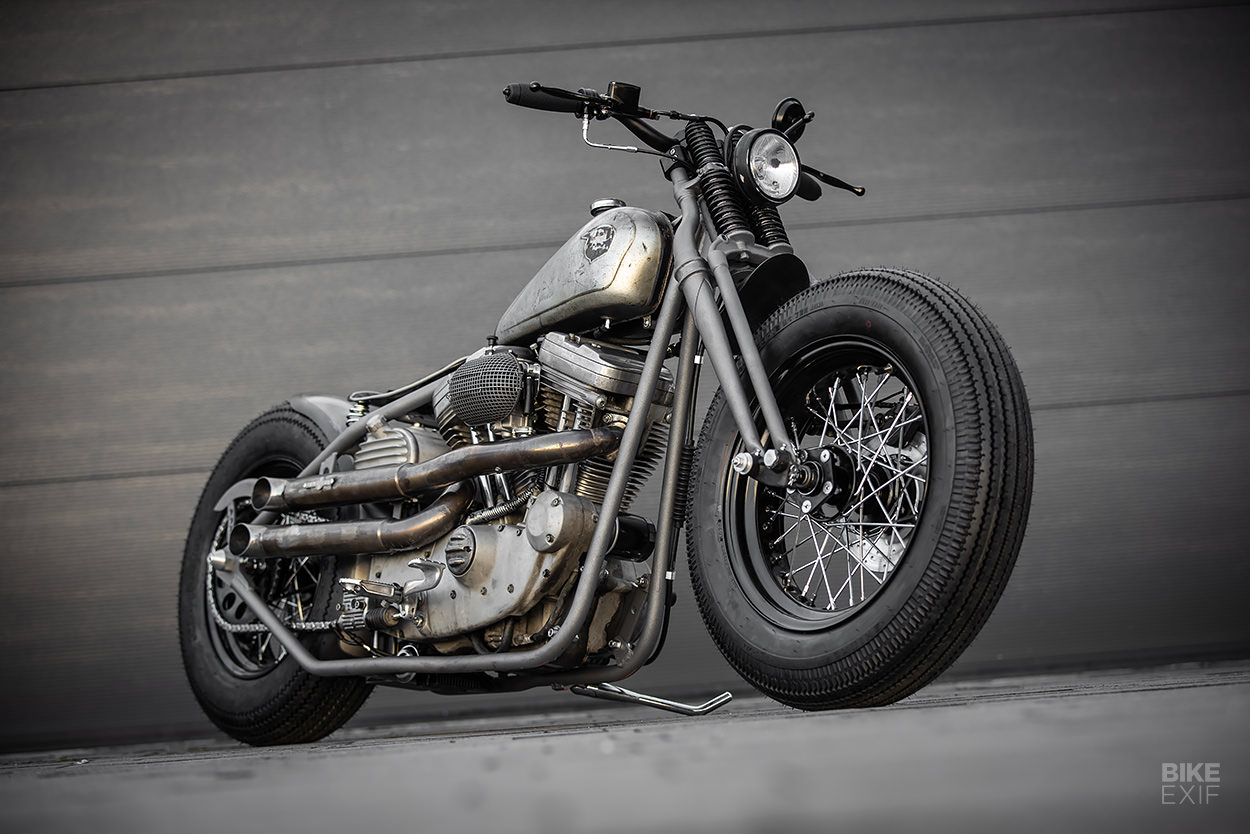 You know you’ve been building custom motorcycles for a long time, when a bike you built two decades ago makes its way back into your workshop. That’s the story of this Harley-Davidson Sportster hardtail from MB Cycles. Or rather, it’s the story of its frame—because that’s the only original part left on it.

MB Cycles owner Martin Becker first built the Sporty hardtail for his brother twenty years ago, when he was just starting out. His brother eventually parked the Harley and moved onto other bikes, until recently, when he sold it back to Martin. 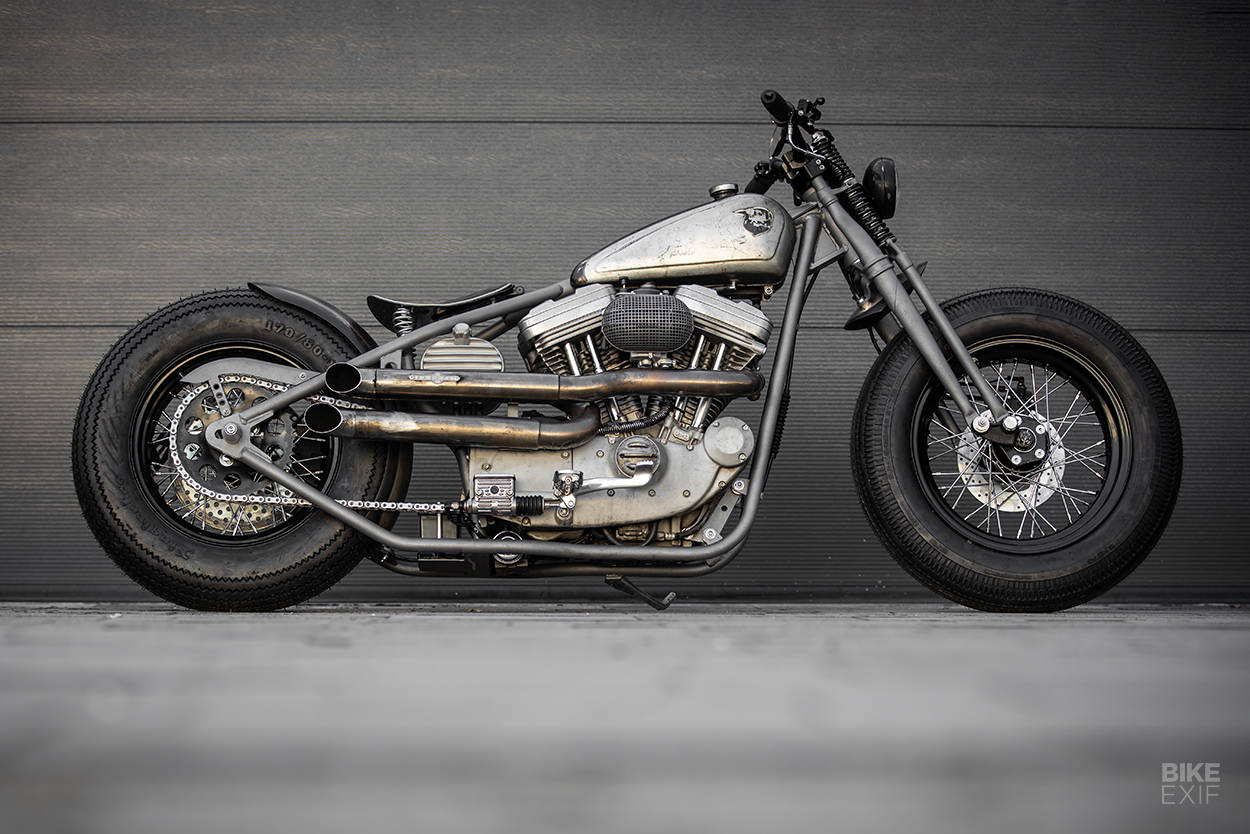 “It was in a bad condition and hadn’t run in years,” Martin tells us. “Everything was f-d up except the frame. But the cool thing was that the title had ‘MB Cycles’ listed as the manufacturer—this isn’t possible anymore nowadays.”

The frame had originally come from the Dutch frame builders, VG Motorcycles. “They do top replicas of old Harley frames, custom frames to order, and frames like the one I used on this Sportster,” says Martin. “This is their standard Sportster frame, with stock measurements like the old OEM hardtail frames.” 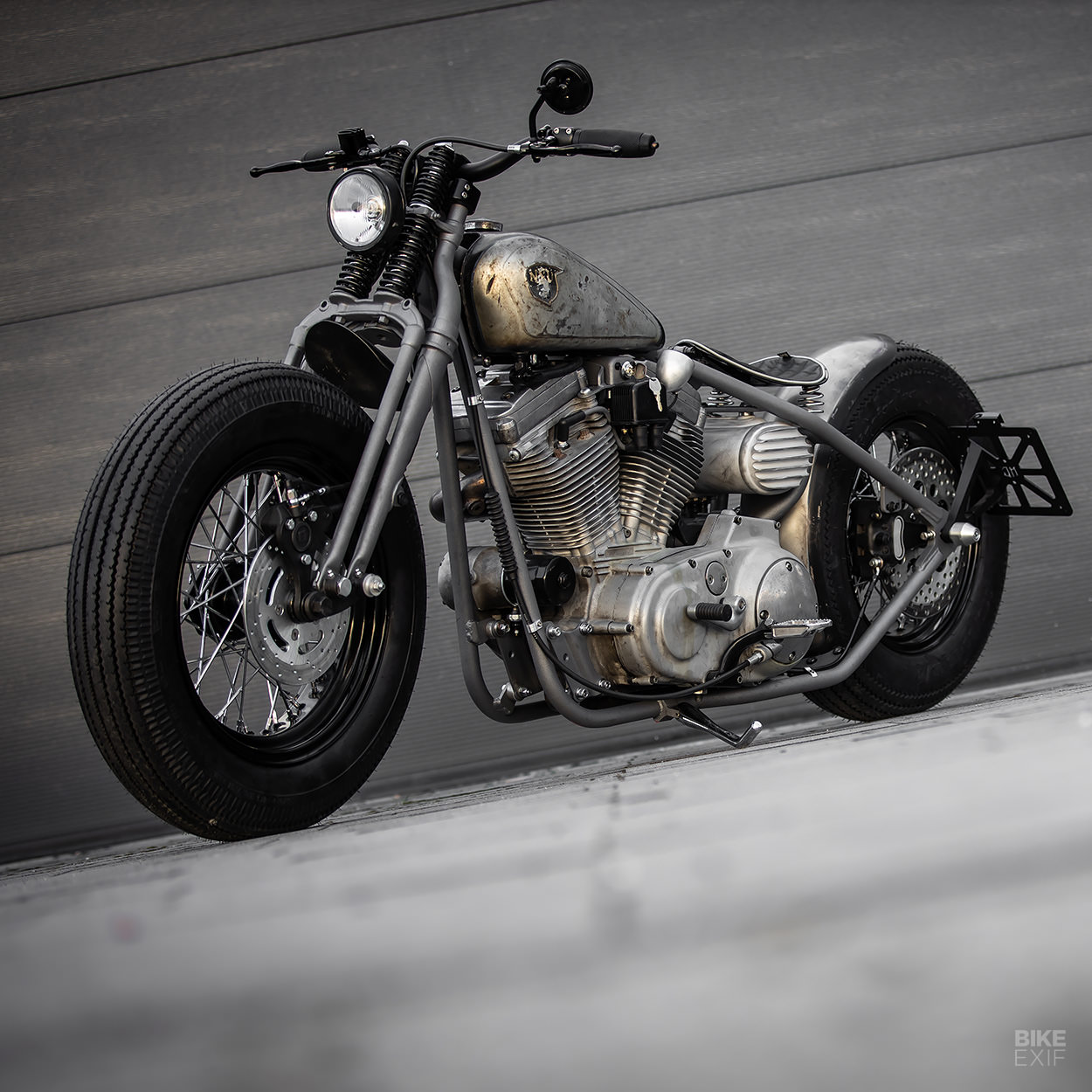 Martin stripped the bike down to its nuts and bolts, sandblasted the frame and stuck a 1996 Harley-Davidson XL883 Sportster motor in it. Once he’d cobbled together a rolling chassis of sorts, he parked it in his showroom to elicit a commission from potential customers. It didn’t take long for someone to bite—so Martin set about resurrecting one of his oldest projects.

To finish off the rolling chassis, he matched the hardtail frame up to a replica springer front end. Next he laced up a set of 16F/15R wheels, using hubs from a late 80s Harley Evolution model. There’s a two-piston Samwell brake caliper out front and an OEM Harley brake at the back, both running with Goodridge hoses. 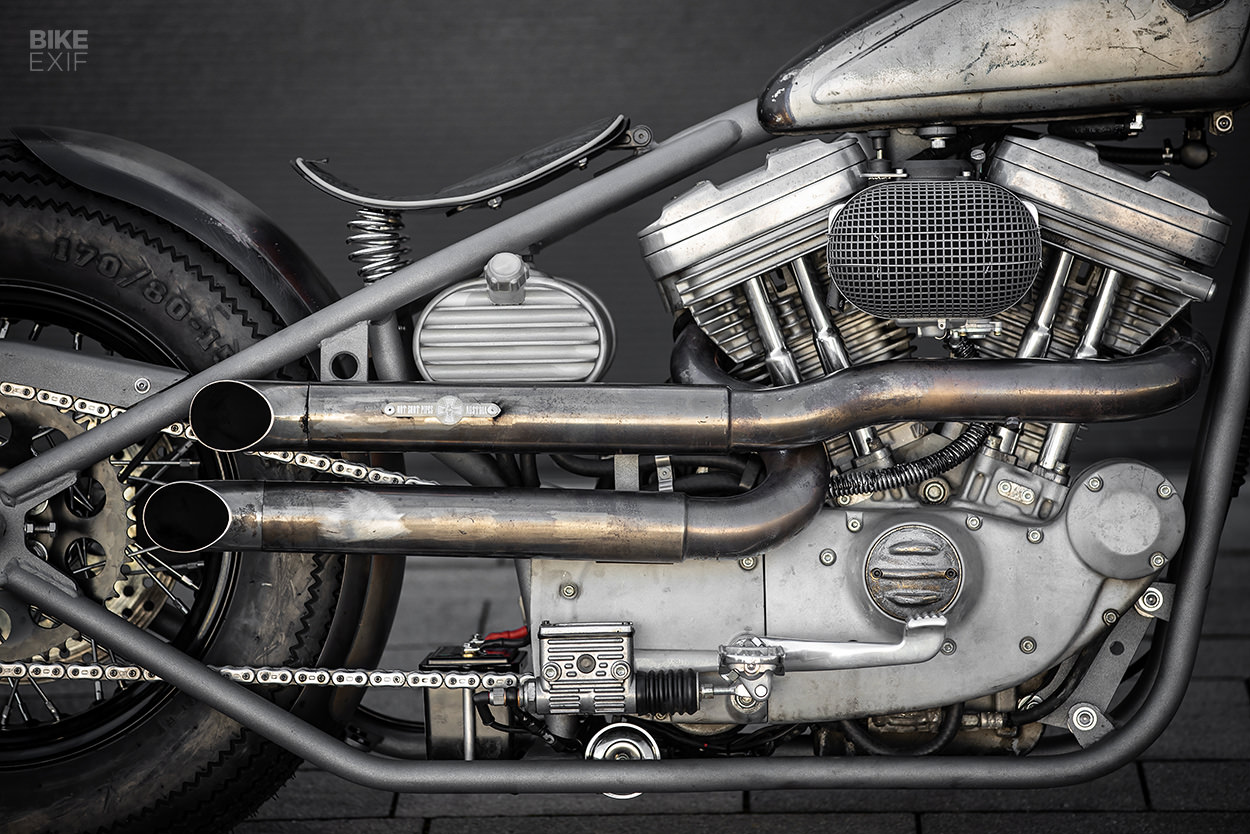 The old Sportster motor has been refreshed—and beefed up. It’s now a 1,200 cc mill, thanks to new S&S Cycle cylinder heads and Wiseco pistons.

Martin also installed a Dynatek Dyna S ignition and S&S coils. The aftermarket CV-type carb and ‘fly eye’ style air cleaner are off-the-shelf items, and the exhausts come from BSL Products in Austria. The humble Sportster now makes 65 hp, which is 12 more than it did in 1996. 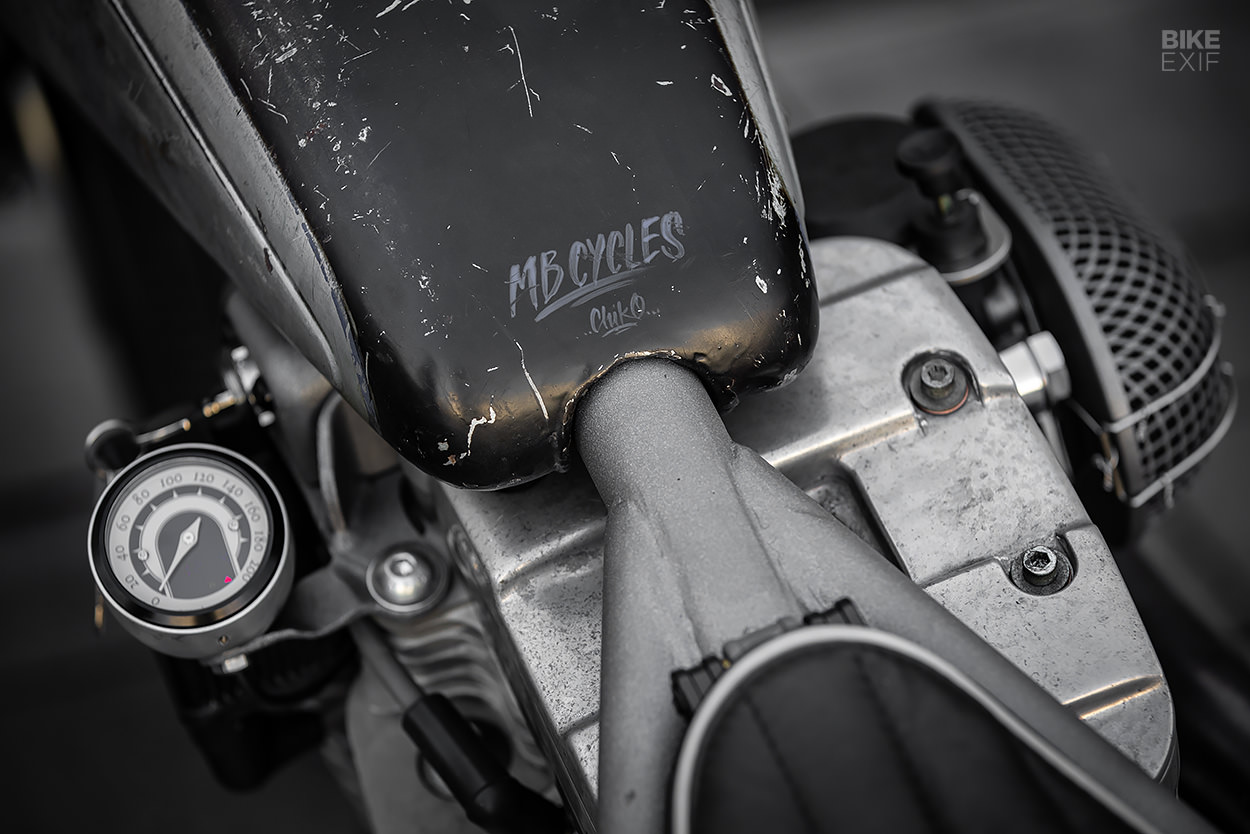 The worn-in look on the exhaust system is a theme that’s repeated throughout the build. Some parts have been finished in muted tones or made to look beat up, while others wear bona fide patina.

The fuel tank’s actually from the 1930s, borrowed from Martin’s own stash of vintage parts. It needed some mods to fit, but it still wears its original paint. There’s a modified Penz fender out back; a new part that Chiko’s Pinstriping painted to match the tank. 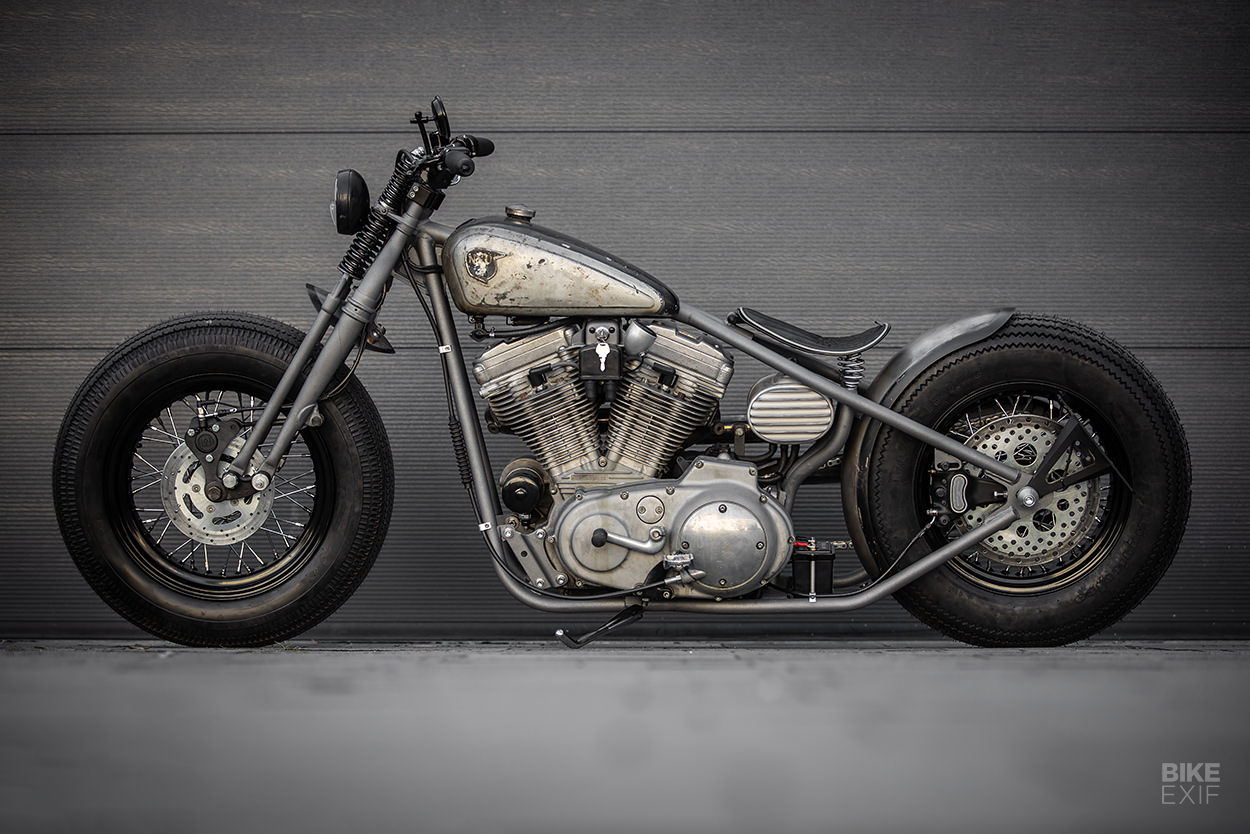 The aftermarket oil tank is new, but fits the vintage theme perfectly. Above it is a custom spring-mounted saddle, upholstered in leather from an old office chair. A tiny handmade front fender finishes off the bodywork.

Metal Skin Works handled the powder coating on the project, including the frame, which is done in a sort of matte metalflake effect. But despite the aged look of the bike, it’s packing a number of stealthy modern parts. 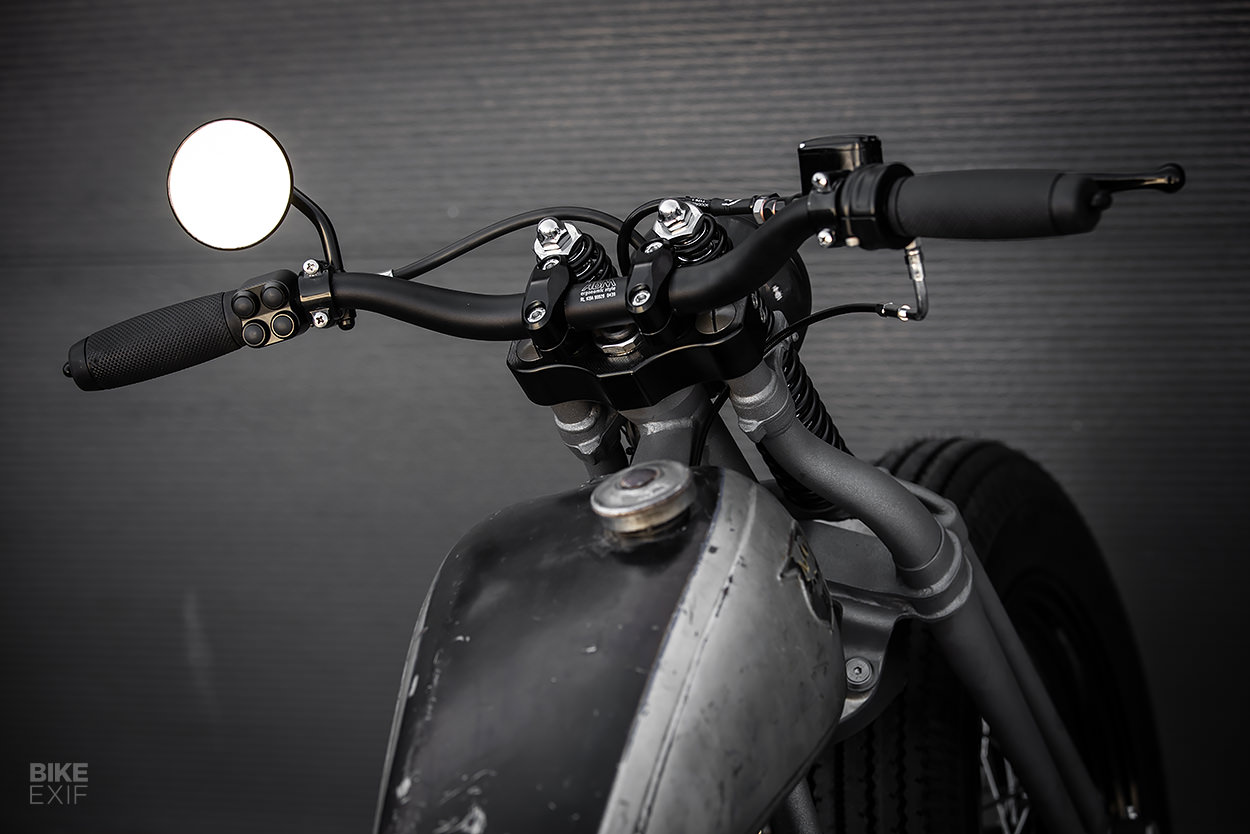 Up in the cockpit are tapered handlebars and fresh risers from ABM, attached to a burly top yoke from Wunderkind. They’re kitted with modern mini-switches, Kustom Tech controls and Biltwell Inc. grips. A Motogadget speedo sits discreetly to the left of the fuel tank.

The headlight’s a custom part, made by combining the internals of an aftermarket light with the housing of an OEM Harley fog light. 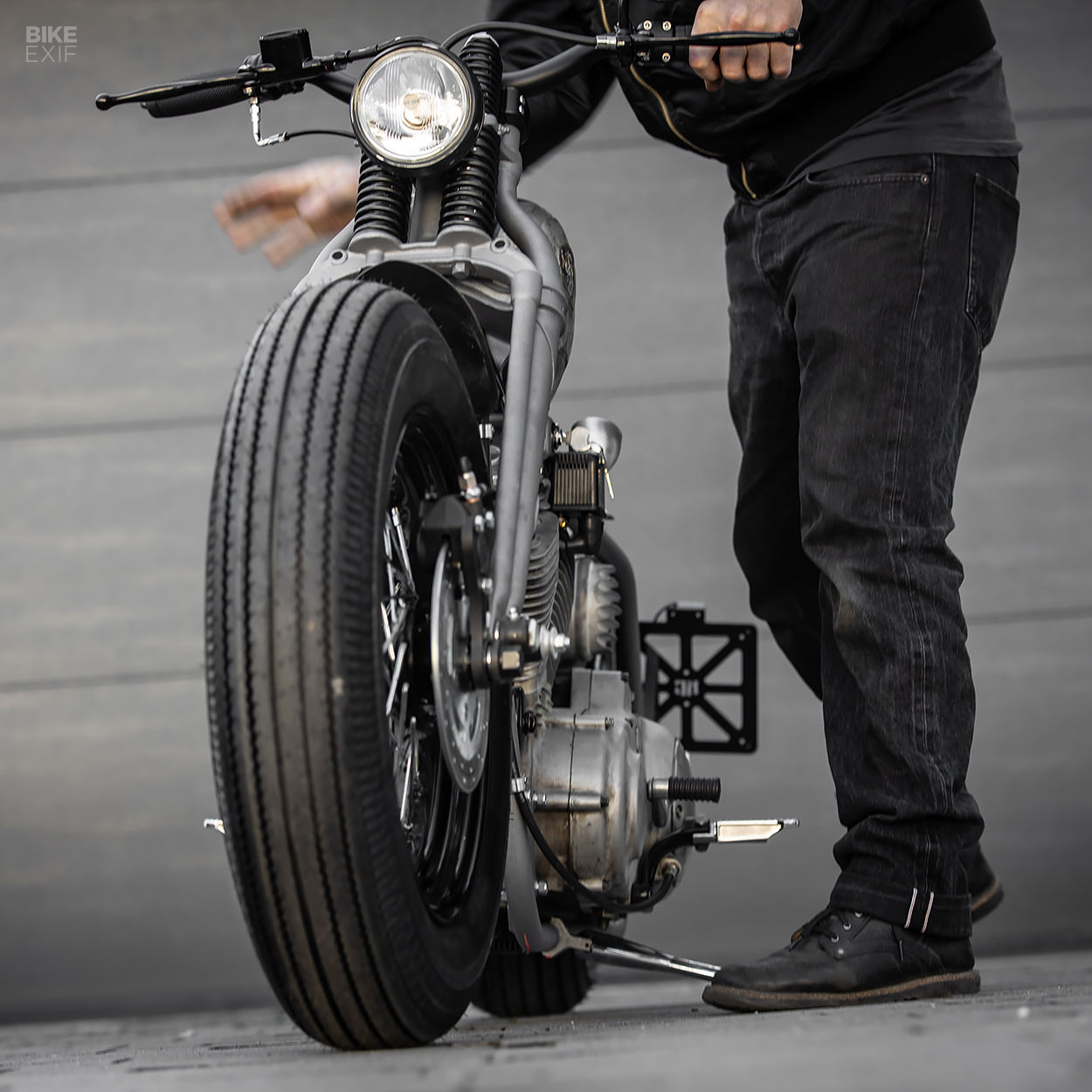 Martin also added Kellermann turn signals all round, with the rear units doubling as taillights. The footpegs are from Biltwell Inc., the license plate bracket is from Hippy Killer Kustom, and the chain guard is hand made.

Two months after he booked the job in, Martin was ready to hand the keys to this Sporty’s new owner. But she had changed her mind, and wanted something wilder to upstage her boyfriend and his MB Cycles-built Buell. 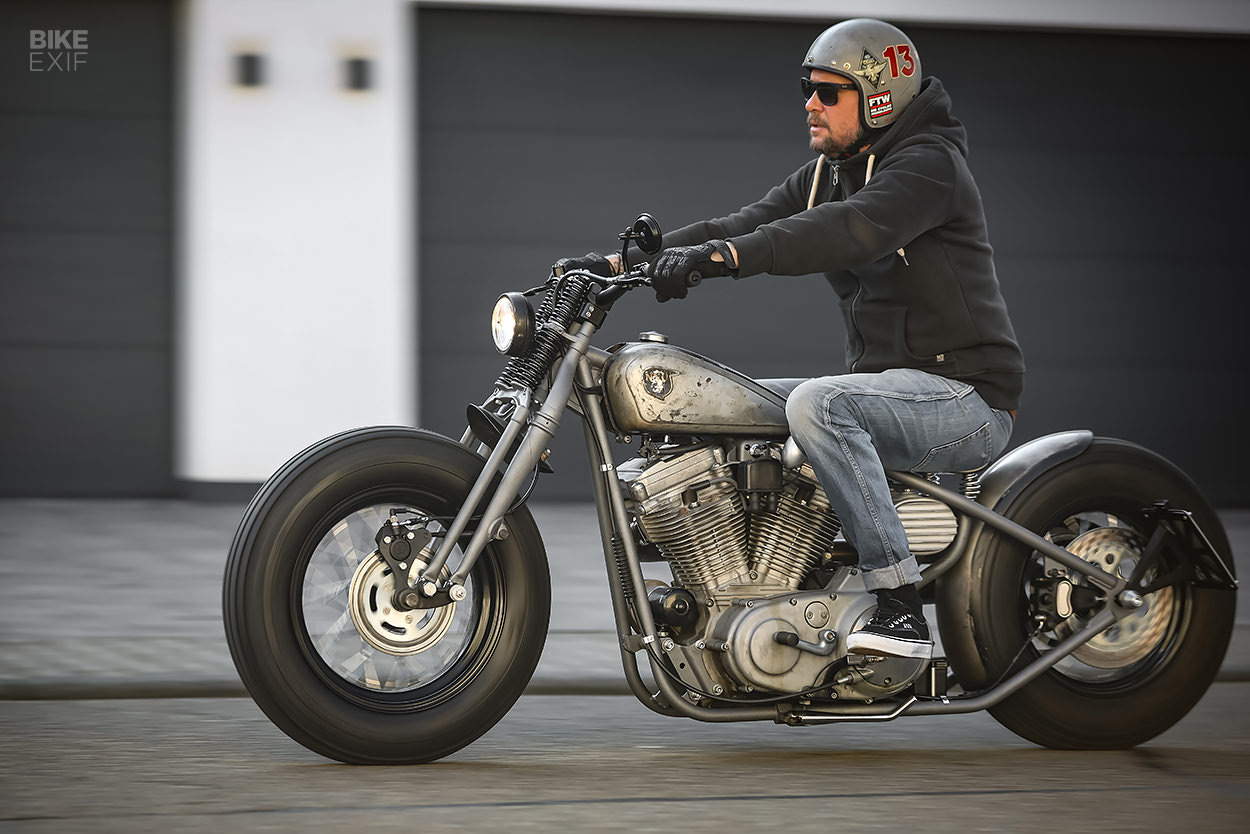 Martin put it on the market, and it was snapped up in no time by a friend and regular MB Cycles client. And we’re not surprised—as retro Sportster hardtail bobbers go, this is as good as it gets. 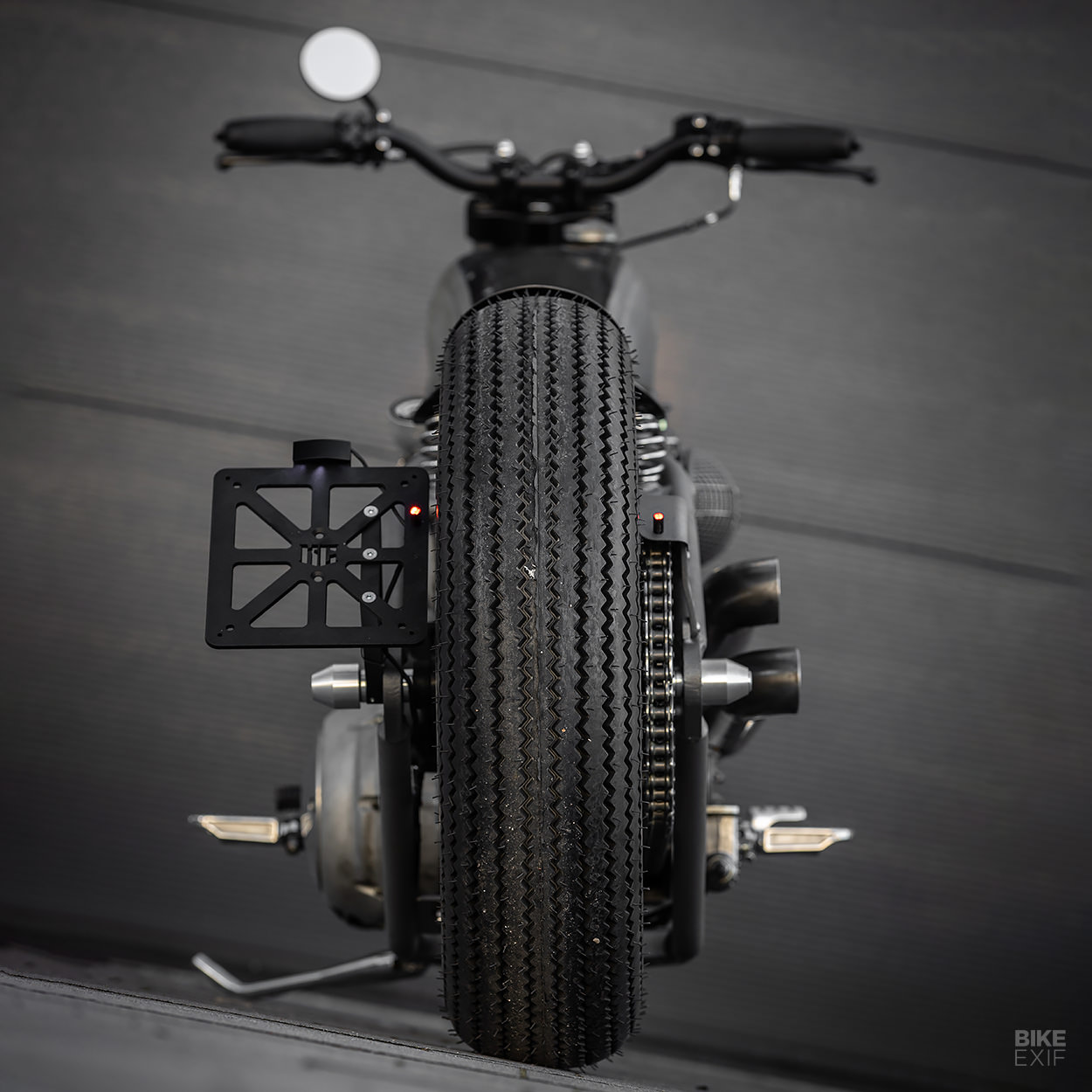