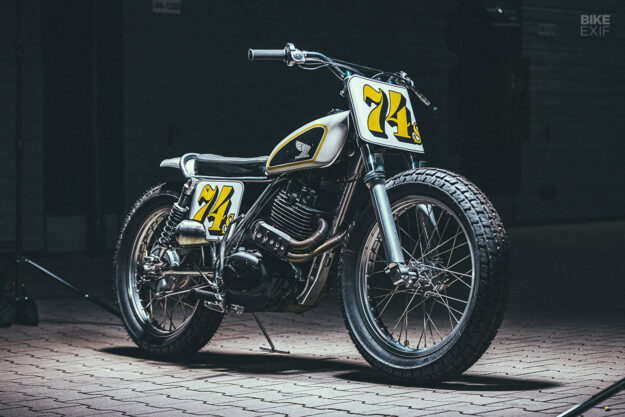 If you fancy yourself a romantic, consider this: have you ever built a custom motorcycle for your significant other? Uwe Kostrewa has, and it’s an absolute peach.

We all know Uwe as the guy behind Hombrese Bikes in Cologne, Germany. His style is distinct; if it’s a flat tracker or scrambler with a charming retro vibe, Uwe probably built it. This time he’s applied that recipe to a humble 1979 Honda XL500S, turning into a zesty race bike for his girlfriend.

“I needed a flat tracker for my love, Steffi, because she wanted to start riding and racing flat track,” Uwe tells us. “I’m a big fan of flat track bikes and their design. This is not my first build, so the idea for a design normally pops into my head automatically.”

“But in this case, Steffi also had a lot of ideas that I implemented. It was supposed to be her bike, after all.” 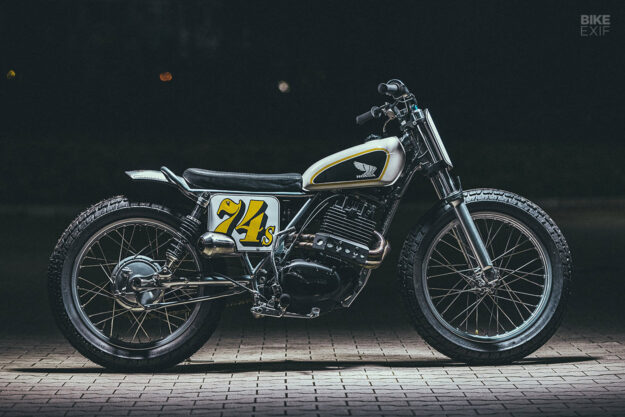 The main reason for picking the XL500 as a donor, other than the fact that Honda thumpers are notoriously bulletproof, was its size. Steffi has zero flat track experience, so she needed something light and manageable. A stock XL500S weighs around 135 kilos [297 lbs] dry—this one’s now down to 114 kg [251 lbs].

The couple tracked down a donor that was, according to Uwe, “in a normal condition for an enduro bike of that age.” The engine was good enough not to need a rebuild, so he simply repainted it and swapped the air box for a K&N filter. (A carb upgrade is on the cards for next season.) 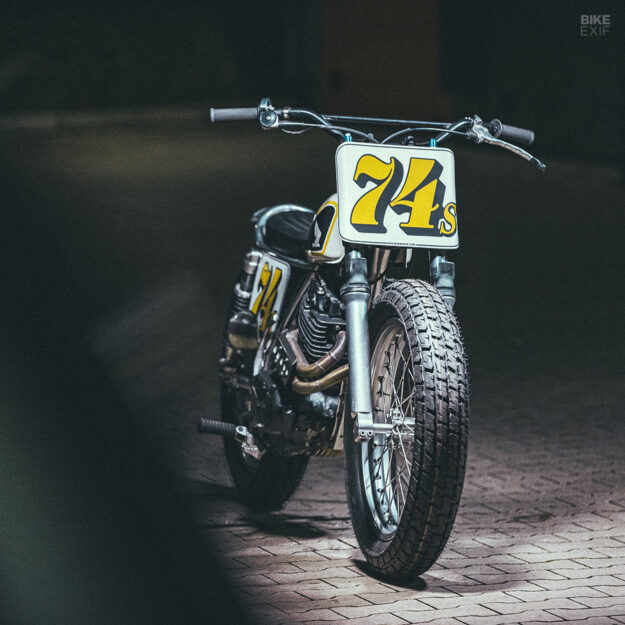 Since this bike won’t run on the street, there’s no front brake. The stock Honda drum brake does duty out back, with a fresh set of stainless steel sprockets sending power to the wheel. The tires are Dunlop’s popular DT3s. 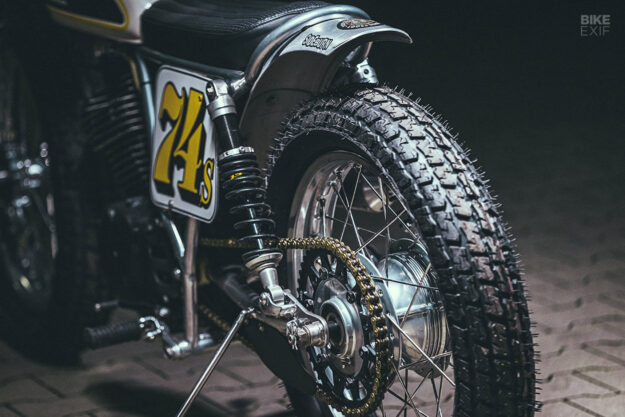 Uwe swapped out the old Honda dirt bike’s suspension components too. It now wears a set of right-side-up forks from a pre-2005 Yamaha R6 up front, and new YSS shocks out back. The XL’s OEM shocks are unusually long, so Uwe relocated the shock mounts on the swingarm in order to run shorter units.

The whole bike sits lower and more level now. Higher up, the subframe was cut-and-looped, and the main frame was liberated of any unnecessary tabs. 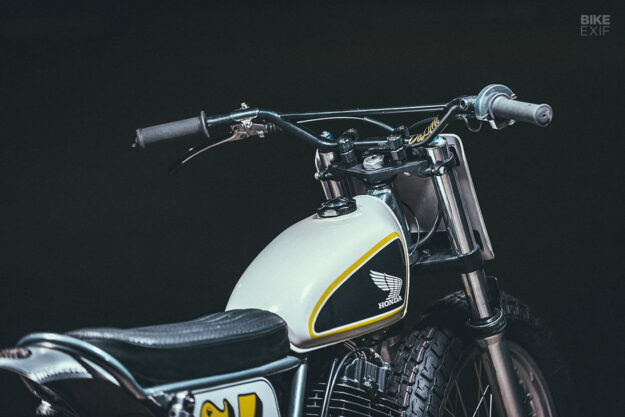 Moving to the bodywork, Uwe adapted a late-70s Honda XL125 fuel tank to fit the 500. A slim custom-made seat sits just behind it, upholstered in material salvaged from a Volkswagen Beetle. The rear end’s finished off with an off-the-shelf fender, trimmed to fit.

With no lights, speedo, starter button or front brake lever, the cockpit is uber-basic. Uwe installed a set of Tomaselli handlebars, with a new kill switch, throttle and grips. 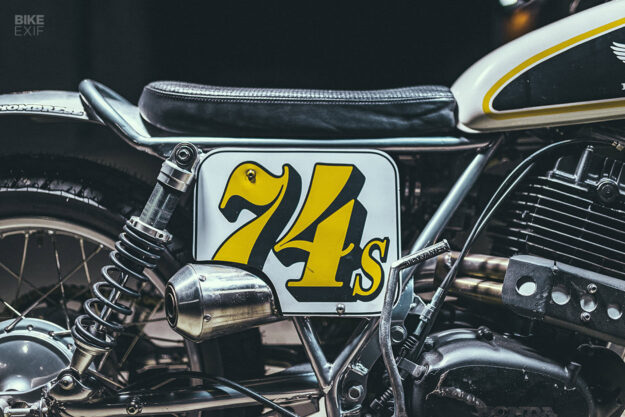 Because this is a bonafide race bike, number boards were mandatory. Uwe cut a set out of Dibond—an aluminum composite material, typically used for signage.

Lower down, a handmade stainless steel exhaust system snakes its way around the engine, exiting through a cutout on the right side number board. It’s adorned with a well-placed heat shield, and a stubby Ixil muffler. 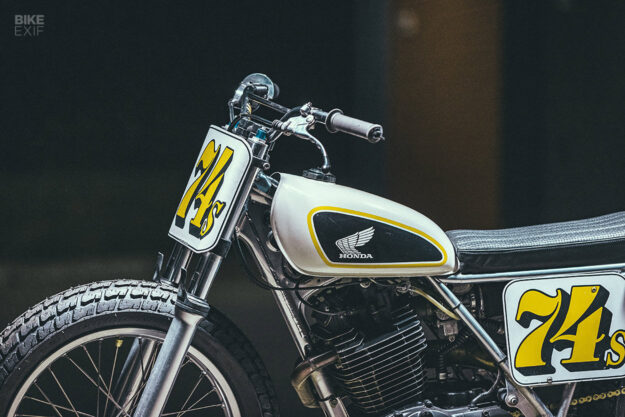 Uwe does his own paint work—and he has a knack for coming up with chic liveries. The white, black and yellow scheme on Steffi’s Honda is as cool as it gets, complete with period-correct Honda ‘wings’ on the tank. Uwe illustrated the number boards by hand too.

As for the rest of the bike, the frame, swingarm, wheels and fork lowers were all powder-coated in a chrome-like finish. It adds an extra classic touch to the build, faintly reminiscent of the nickel-plated frames on vintage dirt racers. 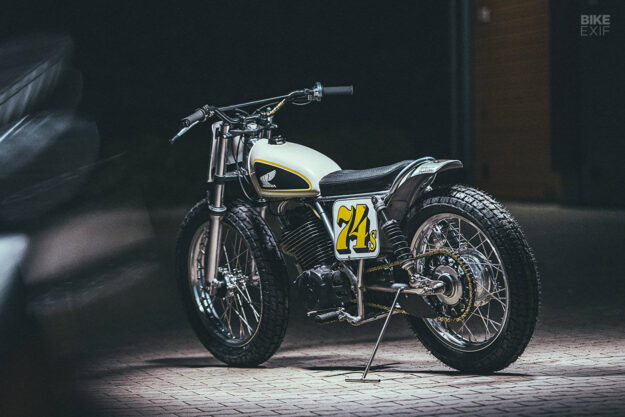 As romantic gestures go, building a custom race bike as cute as this one has to be right up there. If you ask us, Uwe’s a keeper. 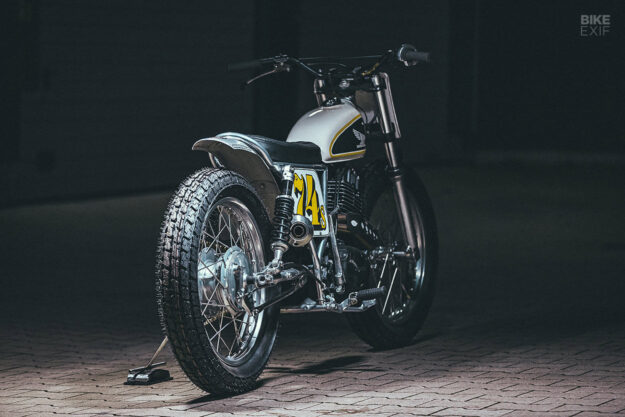