To boldly go: Vtopia makes the Vyrus even wilder 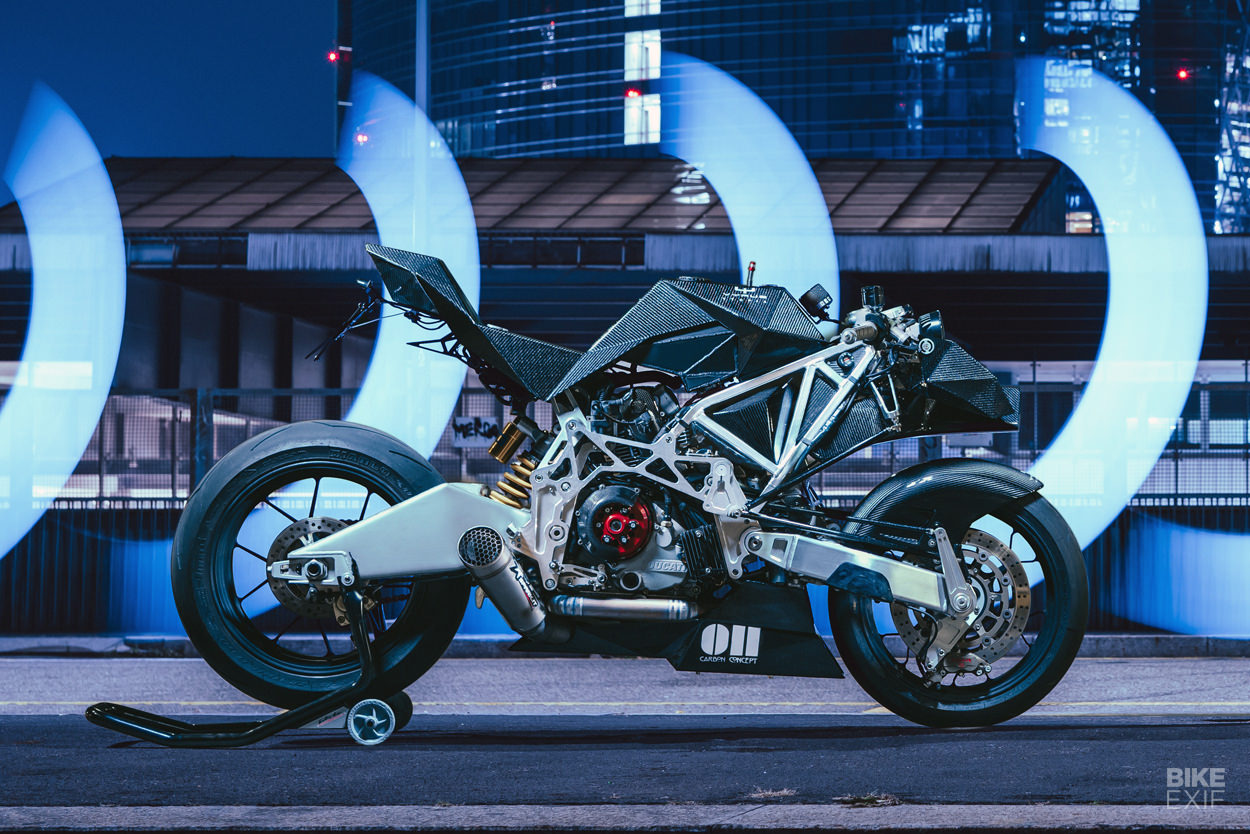 At first glance, the world of custom motorcycles is all about breaking with convention—stripping away the constraints of manufacturer ‘design language’ and legal mandatories.

But in reality, bike building has its own set of conventions; from the small pool of suitable donor bikes to the way bodywork is usually restyled. Which makes this custom Vyrus motorcycle all the more interesting. 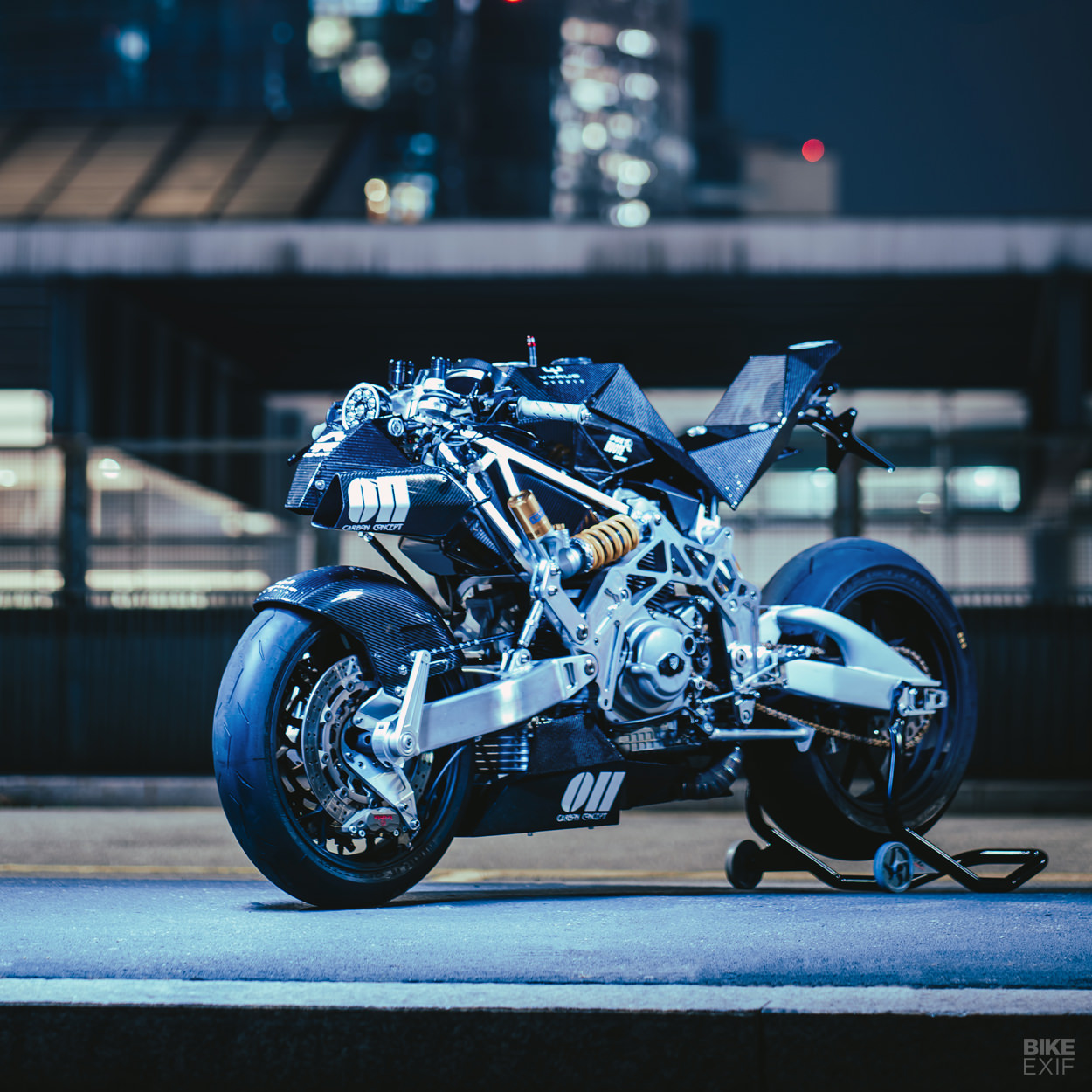 It comes from the Milan-based workshop Vtopia Design, which has just launched a kit that fits the Vyrus 984, 985 and 987 models. Vtopia is run by qualified architect Giorgio Cerrato and his assistant Dario, and they have already built three Vyrus customs—two for customers in Italy, and one for a client in Japan.

The Vyrus is an extreme design to begin with, even if you set aside the hub-center steering. But Vtopia have managed to elevate it to a stratospheric, sci-fi level, almost two decades after the Vyrus first appeared. 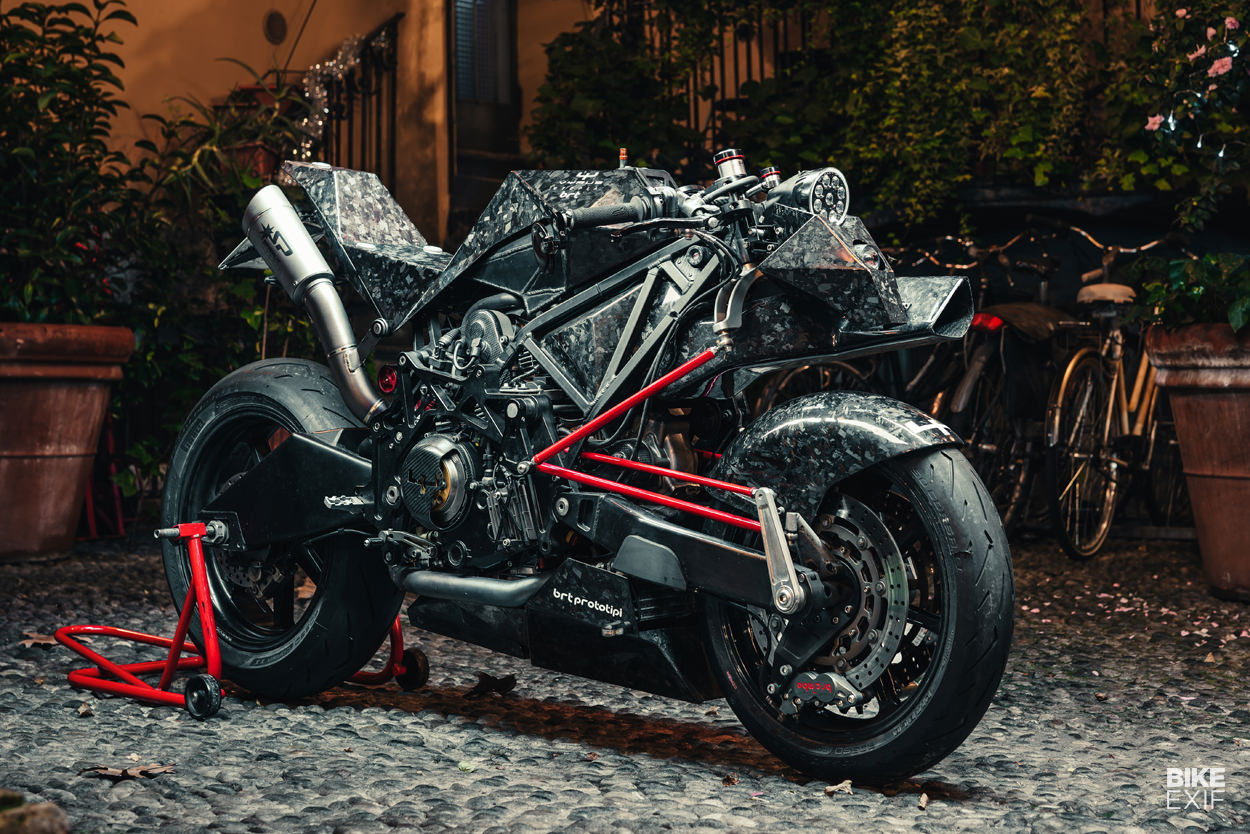 “The project stems from the idea of creating a high-level kit for exclusive motorbikes, using the most modern technologies available today,” says Giorgio. “We use 3D modeling, rapid prototyping, and 3D printing.”

“The idea of starting with the Vyrus as a base was a bold one. The intention was to reinterpret it in a modern style, without looking to the past.” 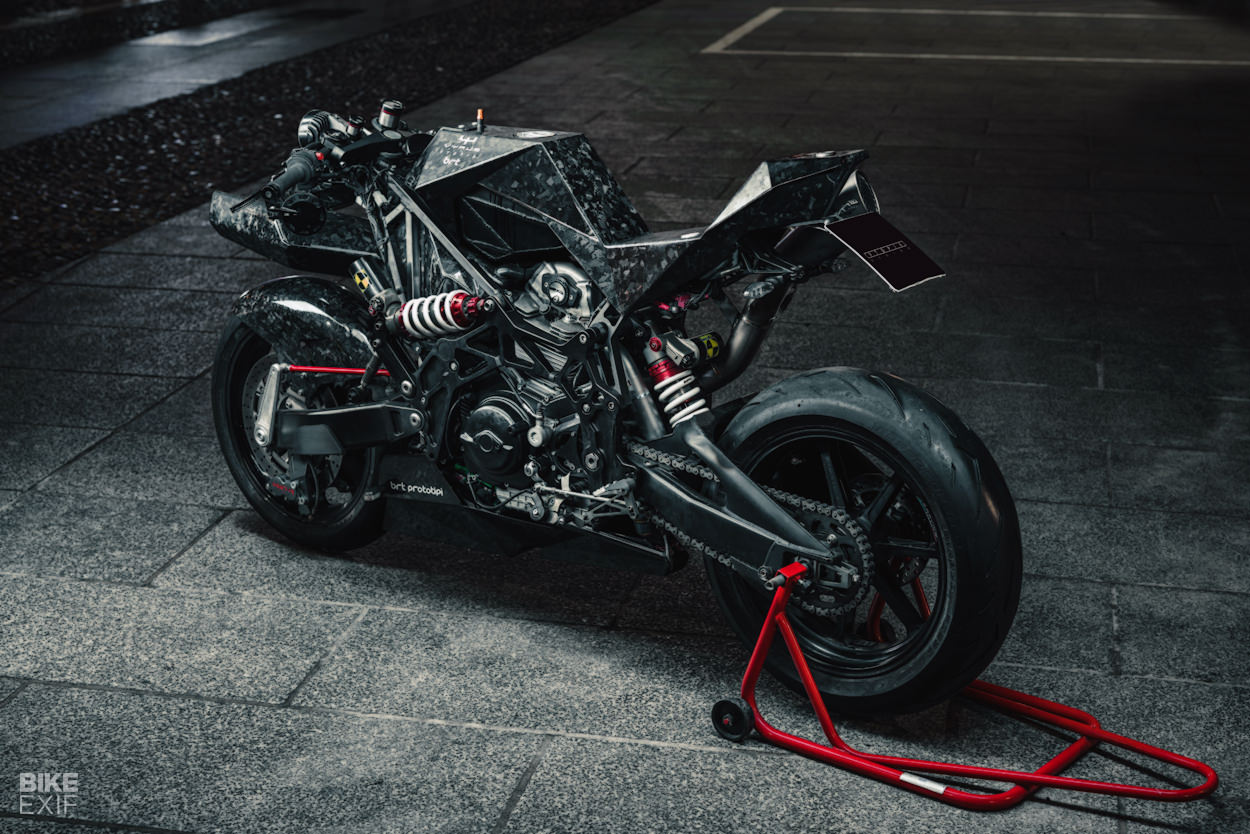 The history of Rimini-based Vyrus is convoluted, and inextricably linked with Bimota. (Odd Bike has an excellent primer.)

But the specs for all the Vyrus models are impressive: they weigh between 330 and 360 pounds, and deliver between 90 and 211 hp. The output depends on whether you choose basic Ducati two-valve power, or a supercharged 1098R engine. 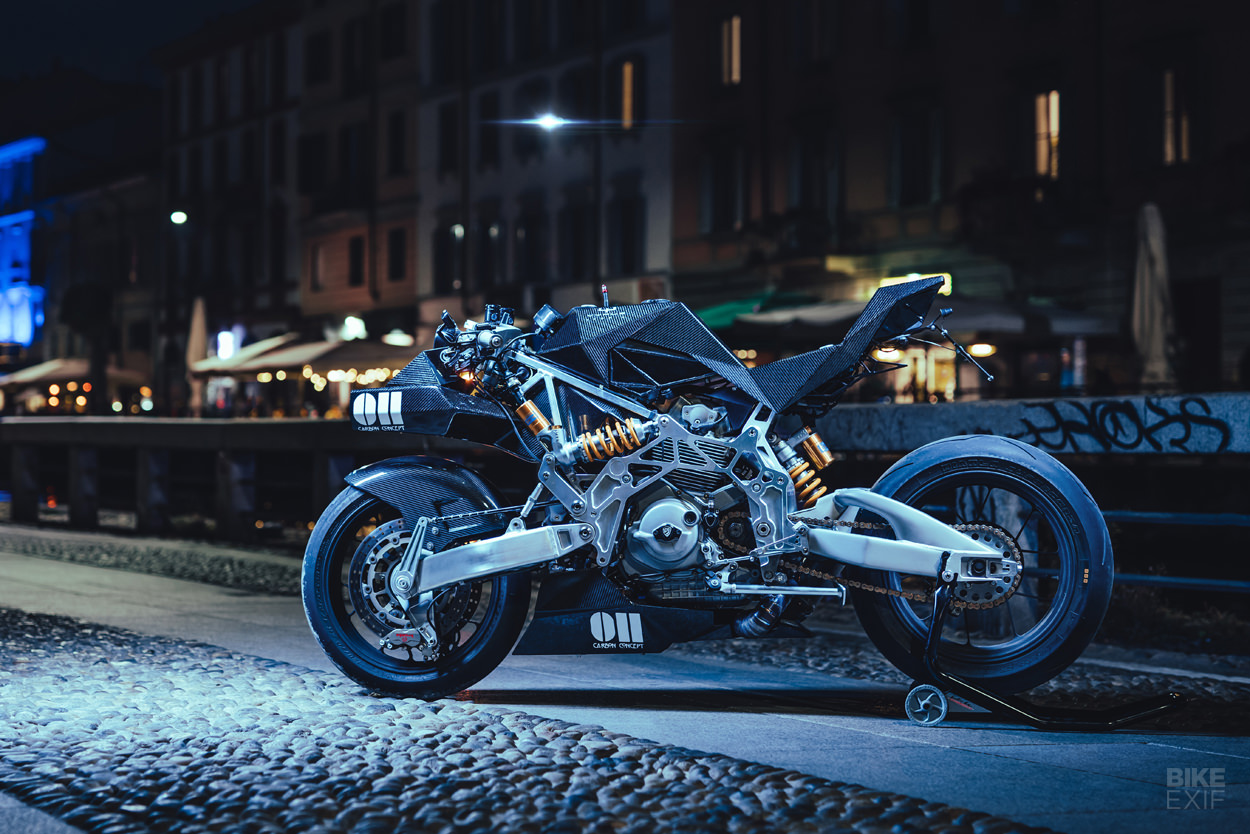 Vtopia already make sharp-looking kits for the Ducati Scrambler and Hypermotard, but those products are much more conventional—in both looks and engineering.

“Modifying an icon of motorcycling was not without its risks,” Giorgio admits. “But the Vyrus has remained unchanged for 20 years.” That’s good enough justification for us. 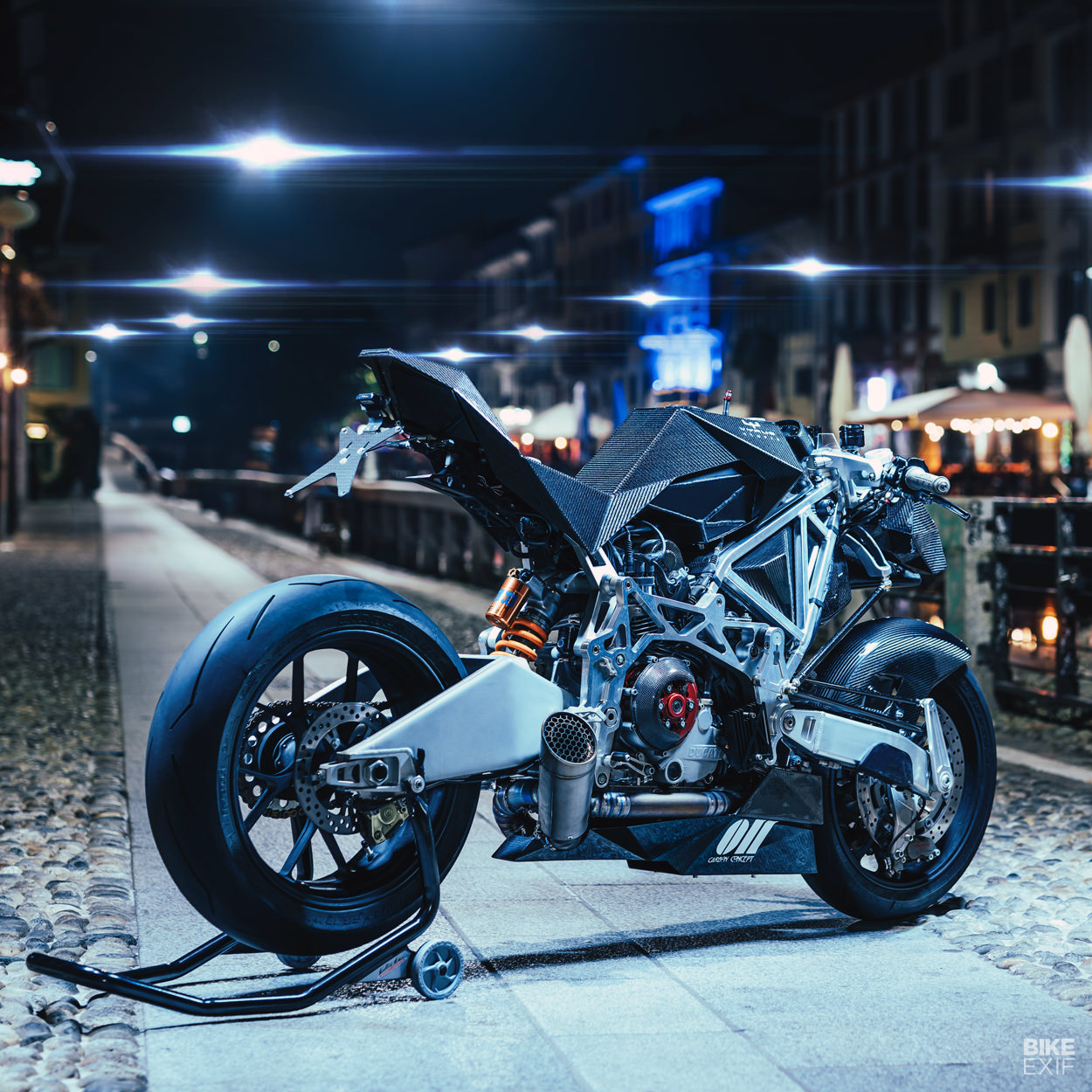 Although the two machines shown here look slightly different, the new bodywork is common to both. It’s essentially a series of polygons, and far removed from the swooping, organic lines we usually see on customs.

More precisely, it’s a type of ‘low poly design,’ a minimalistic style more commonly used in video game design and animation. The last time we saw this was on the BMW C evolution drag bike from Krautmotors, probably because it’s difficult to get right. “Low poly design is a challenge,” Giorgio agrees. “It’s a style that suggests shapes, but does not define them.” 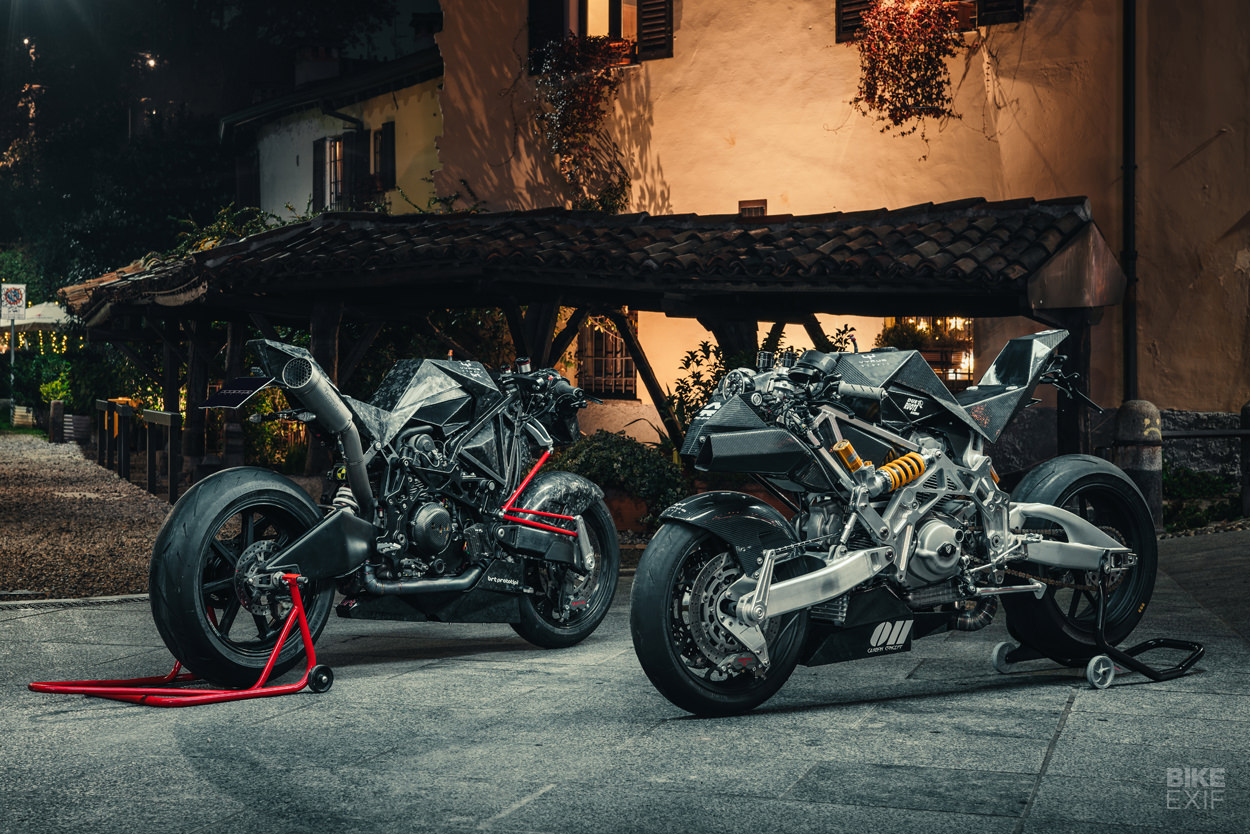 Even if you’re familiar with the Vyrus motorcycle, the kit is so well integrated it’s hard to see where the factory bike stops and the customization starts. And it turns out that the mods are very extensive.

Under the seat is a new pan, 3D laser-printed from a nylon-carbon fiber composite. That helps supports the carbon fiber upper bodywork, which despite the angles, is a monocoque one-piece. 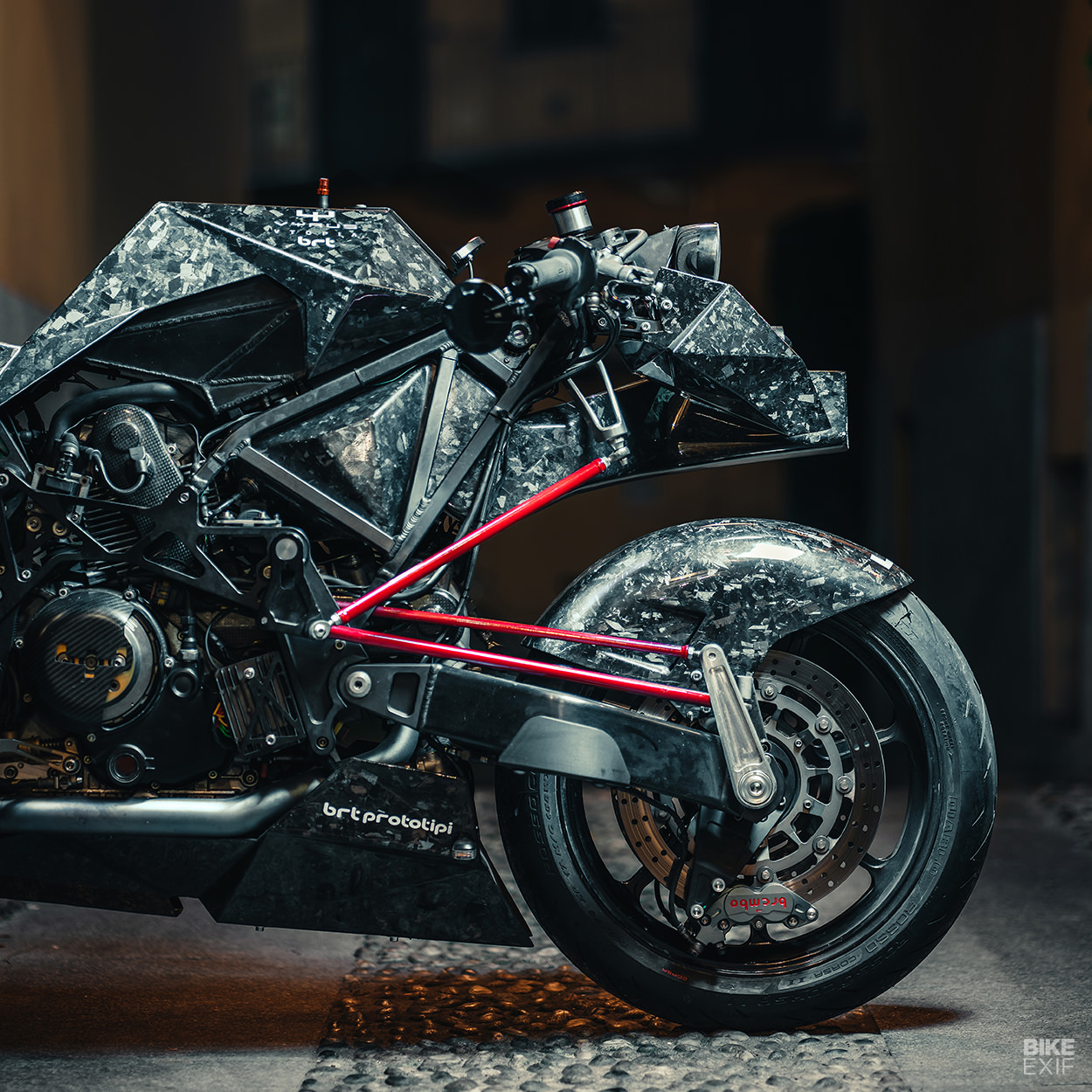 Partially concealed by the new belly pan is a custom exhaust, which can vary in layout. The exhausts are designed by Vtopia and manufactured in titanium by the Italian specialists Spark. 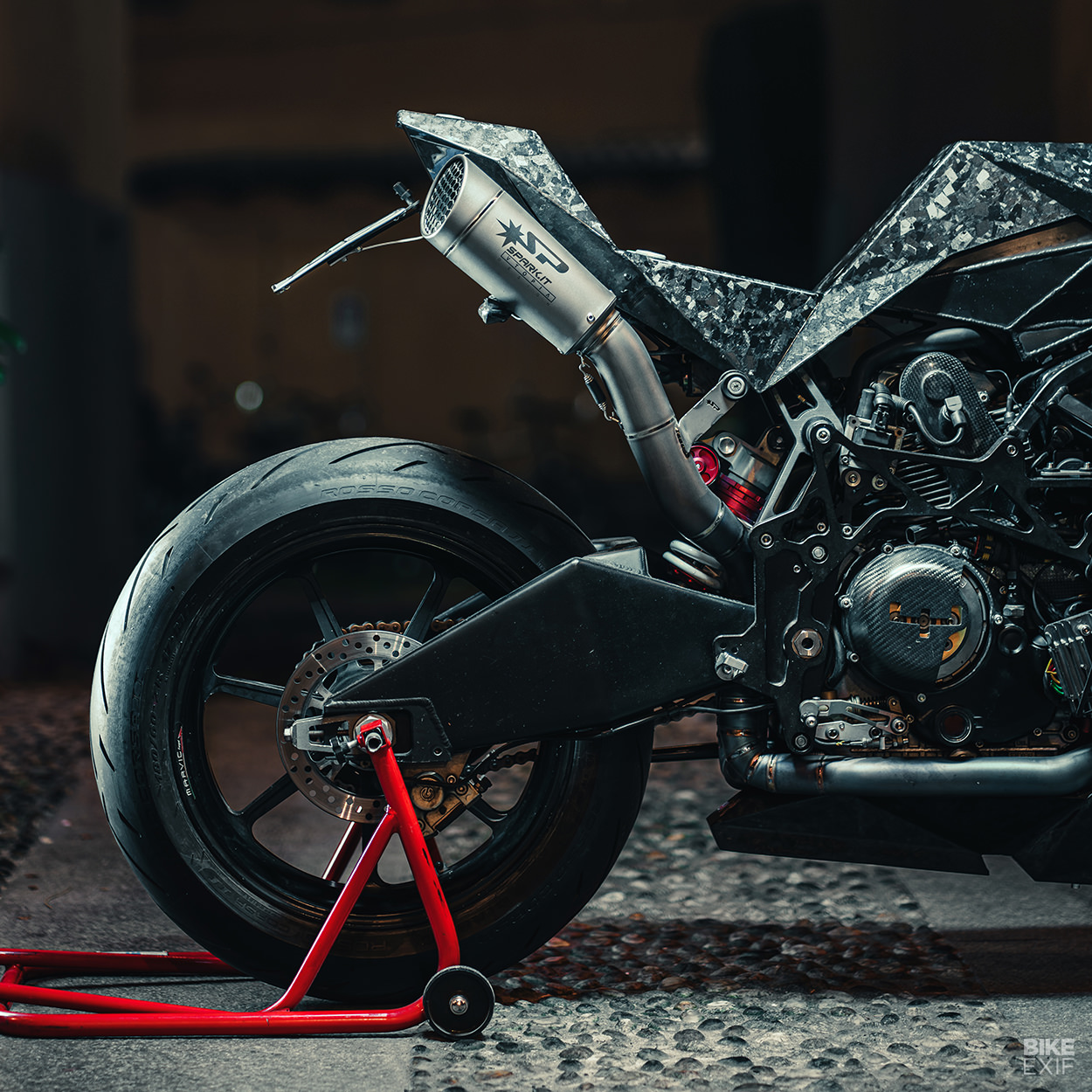 The Vtopia guys are comfortable with CNC machining too. So they’ve spun up new front and rear frame sections—in metal, for maximum rigidity—to pair up with the bodywork. There’s also a new aluminum fuel tank hiding under the polygons.

The bars are carbon fiber, fitted with Domino grips, and right behind them is a Motogadget Motoscope Pro speedo spliced into the standard Vyrus motorcycle wiring. The lighting is another modern update, with LED units all round. 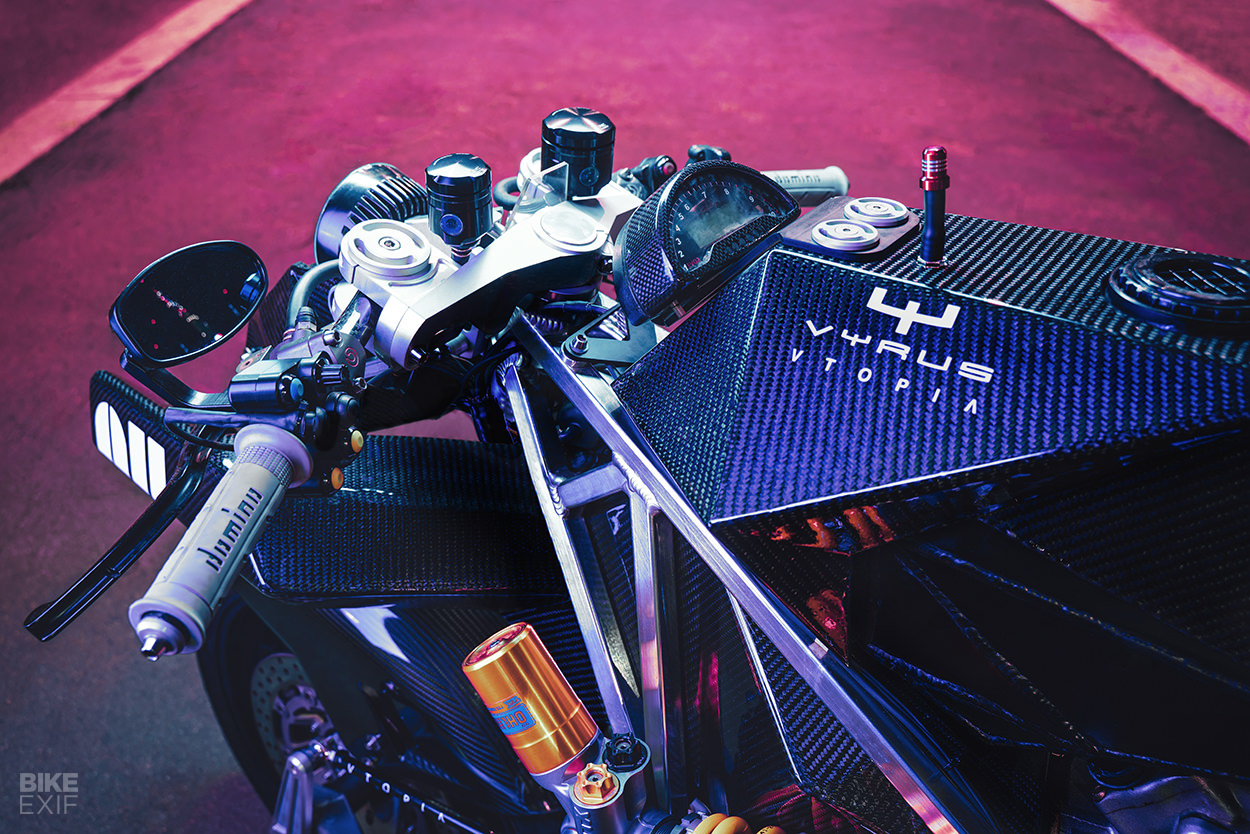 It’s one of the most extreme concepts we’ve ever featured, and won’t be to all tastes. But if you’re looking for an exclusive bike with blistering performance and traffic-stopping looks, a Vtopia Vyrus fits the bill.

The cost of the kit is €19,700, which is about $22,400. That’s a very reasonable price considering the level of engineering and the number of components. Just put a little extra aside to secure your own donor bike. 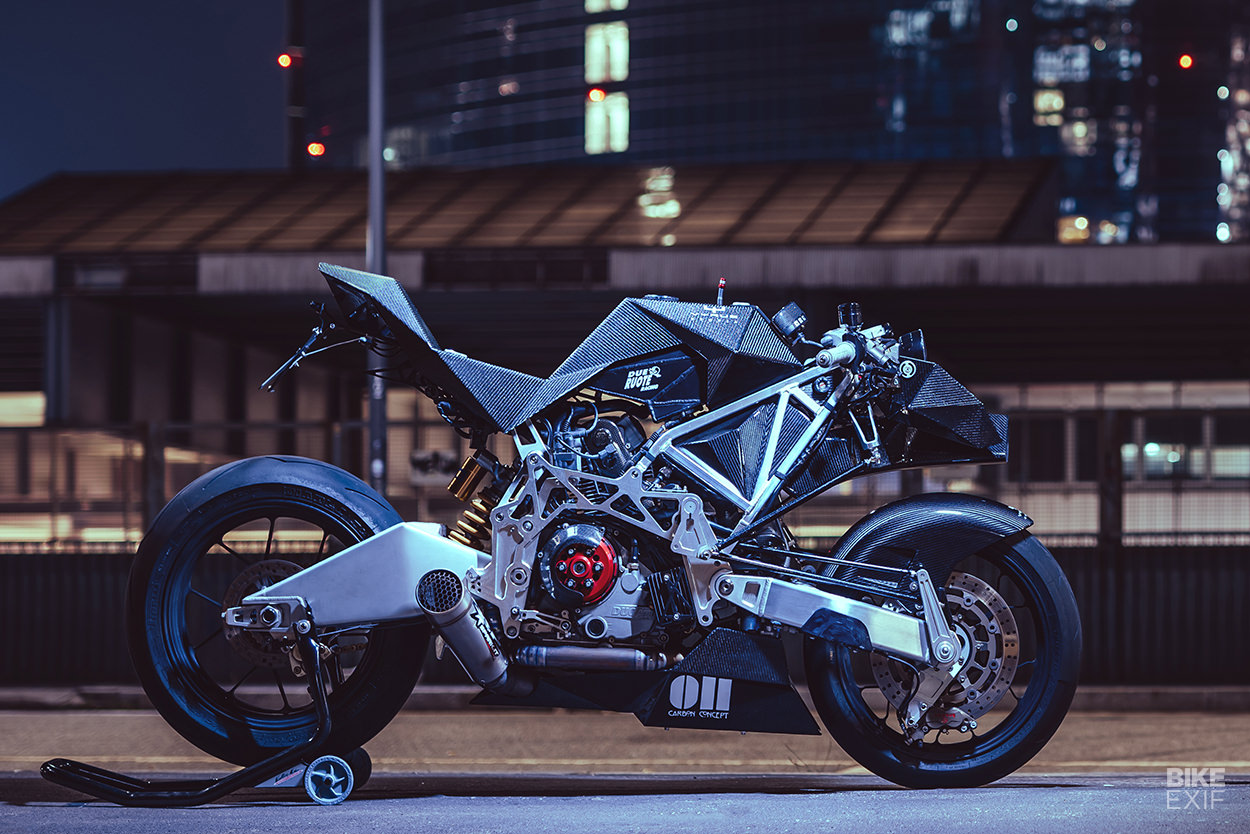