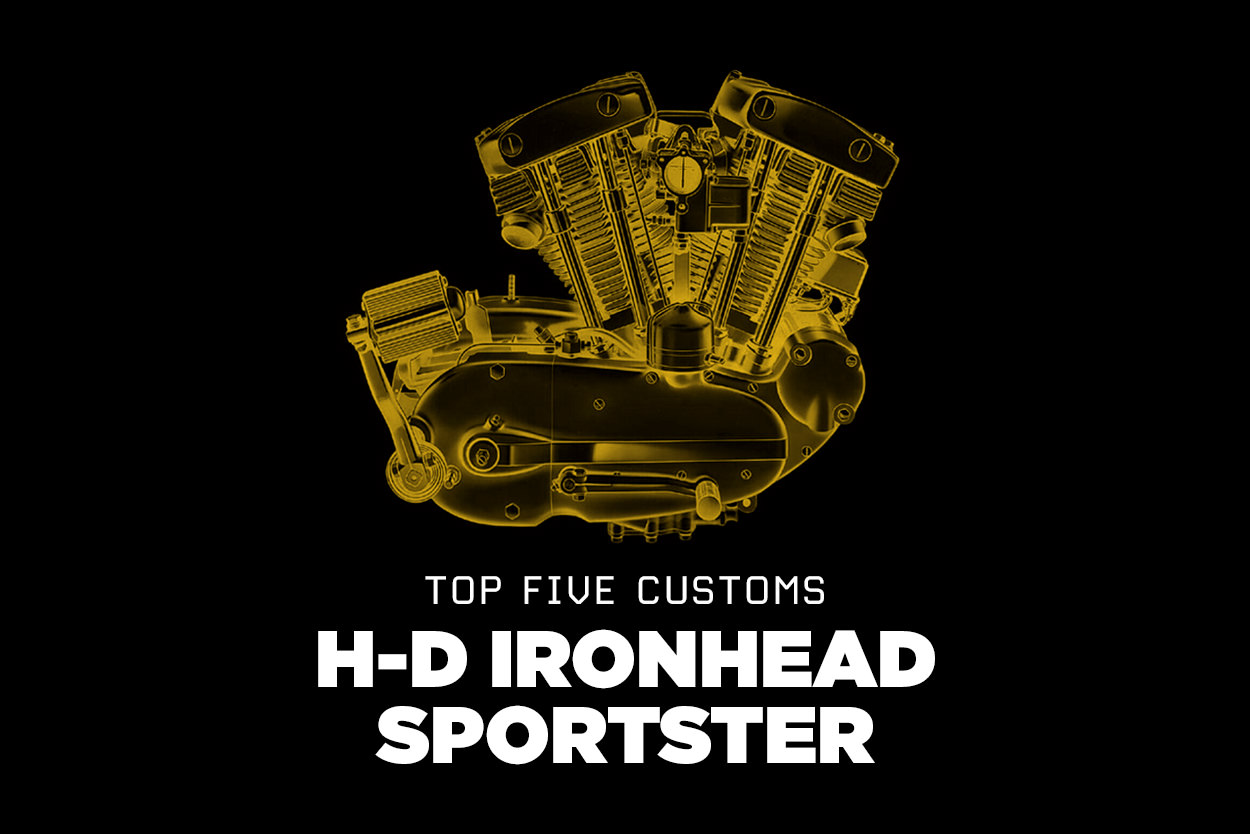 Harley-Davidson has just rebooted one of the world’s longest-running model lines, with the launch of the new Sportster S. But remarkably, it’s only the third major engine update in the Sportster’s 60-plus years on this earth.

Before the new Revolution Max-powered Sportster S came, we had the Evolution motor that debuted in 1986. And before that, the iconic Ironhead. But throughout each era, the Sportster has always been a mainstay of the custom scene. 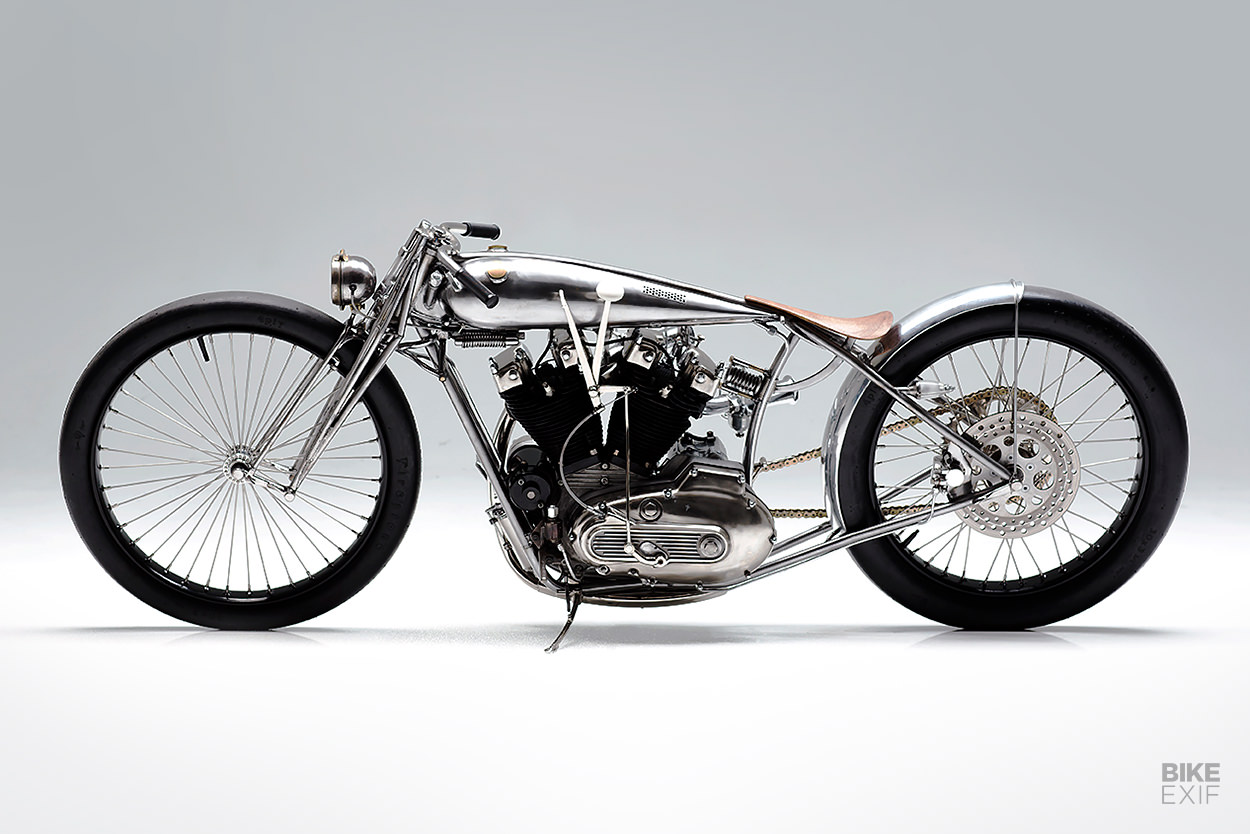 To celebrate, we’ve rounded up our ten favorite Sportster builds, divided by their motors. This week, we’re featuring five top-shelf Ironheads from some of the world’s best custom builders—including illustrious names like Max Hazan [above] and Hideya Togashi [below].

Next week, it’s the Evo’s turn. 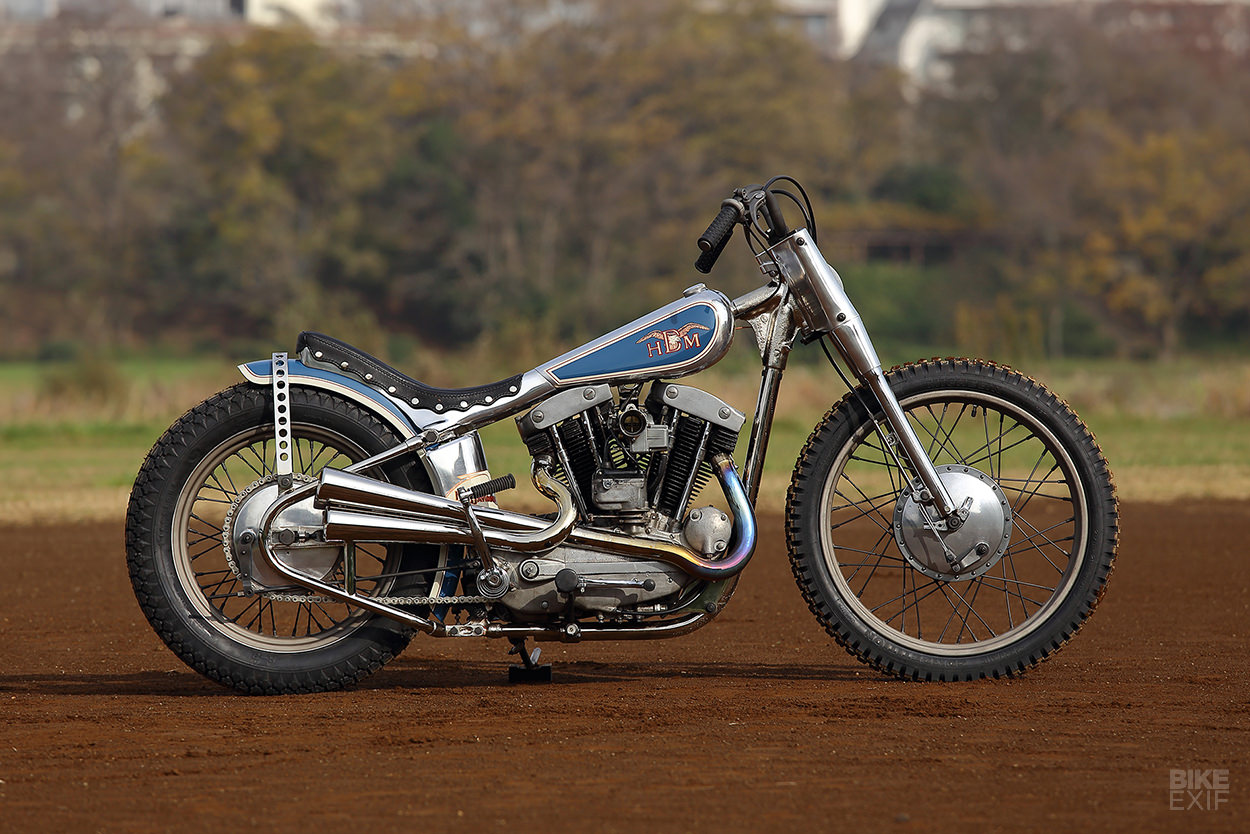 Hide Motorcycle There’s a long history of Japan’s love for Americana, and the humble Sportster is no exception. Case in point: this Ironhead Sportster by Hideya Togashi of Hide Motorcycle (that’s ‘Hee-day’). It was one of the stars of 2018’s Mooneyes show—a show that Togashi-san is a regular fixture at.

The bike’s built around an original but refurbished 1966 XLCH motor, complete with a Linkert DC-7 carb. But the rest of it is mostly is custom, and it was built without any specific style or theme in mind. “As always, I cherish the balance, and maximize the beauty,” says Hideya. 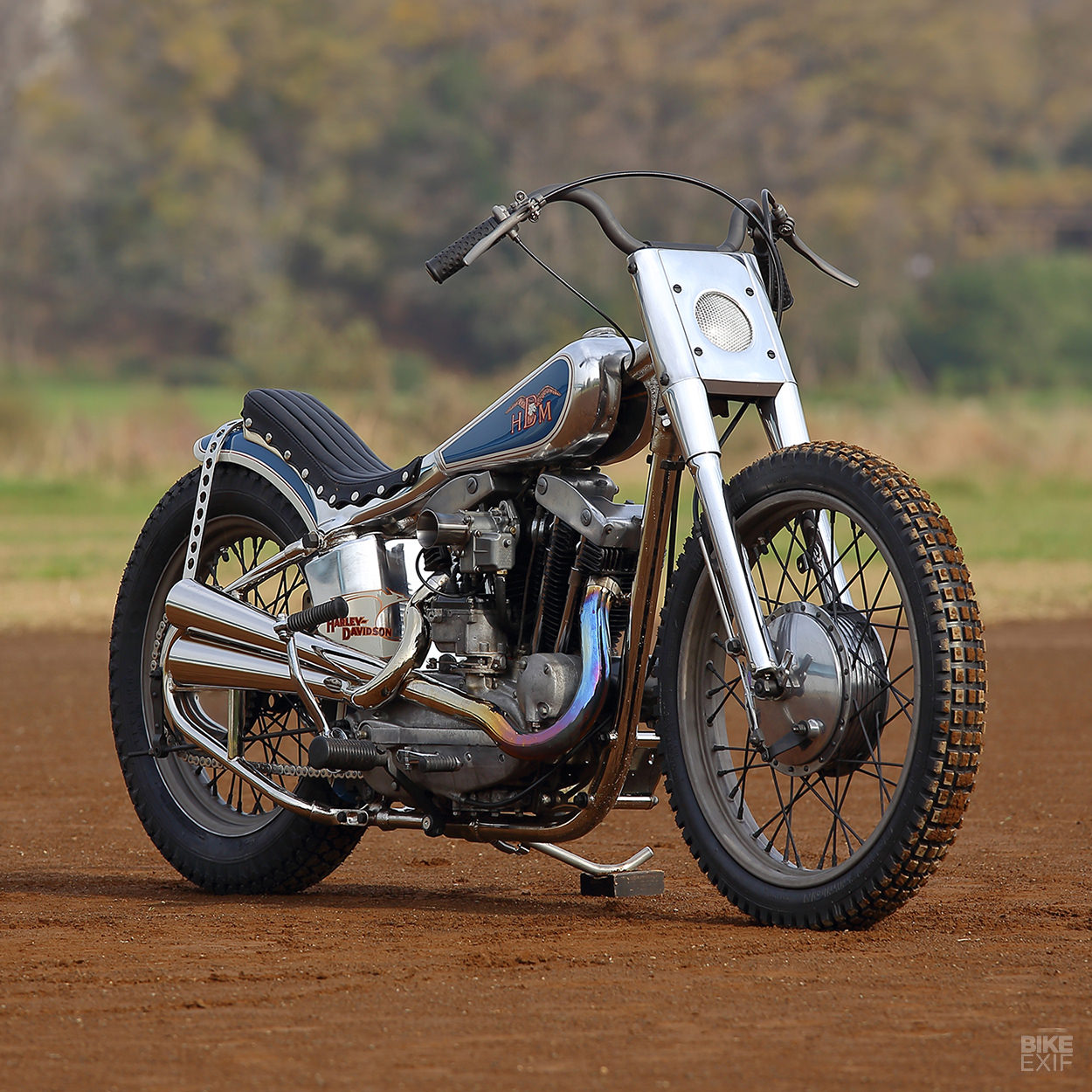 The motor sits in a scratch-built nickel-plated hardtail frame, with the OEM frame number plate grafted on. Hideya kept the original steering head, triples and forks, but added custom sleeves. The Harley rolls on 21F/18R wheels with drum brakes.

Hideya fabricated the aluminum headlight nacelle and fuel tank, and built the oil tank. The rear fender’s been scalped from a vintage Harley FX Super Glide, then modified to suit. Swept back bars and a pair of beautifully-bent nickel-plated exhausts add to the vintage vibe. 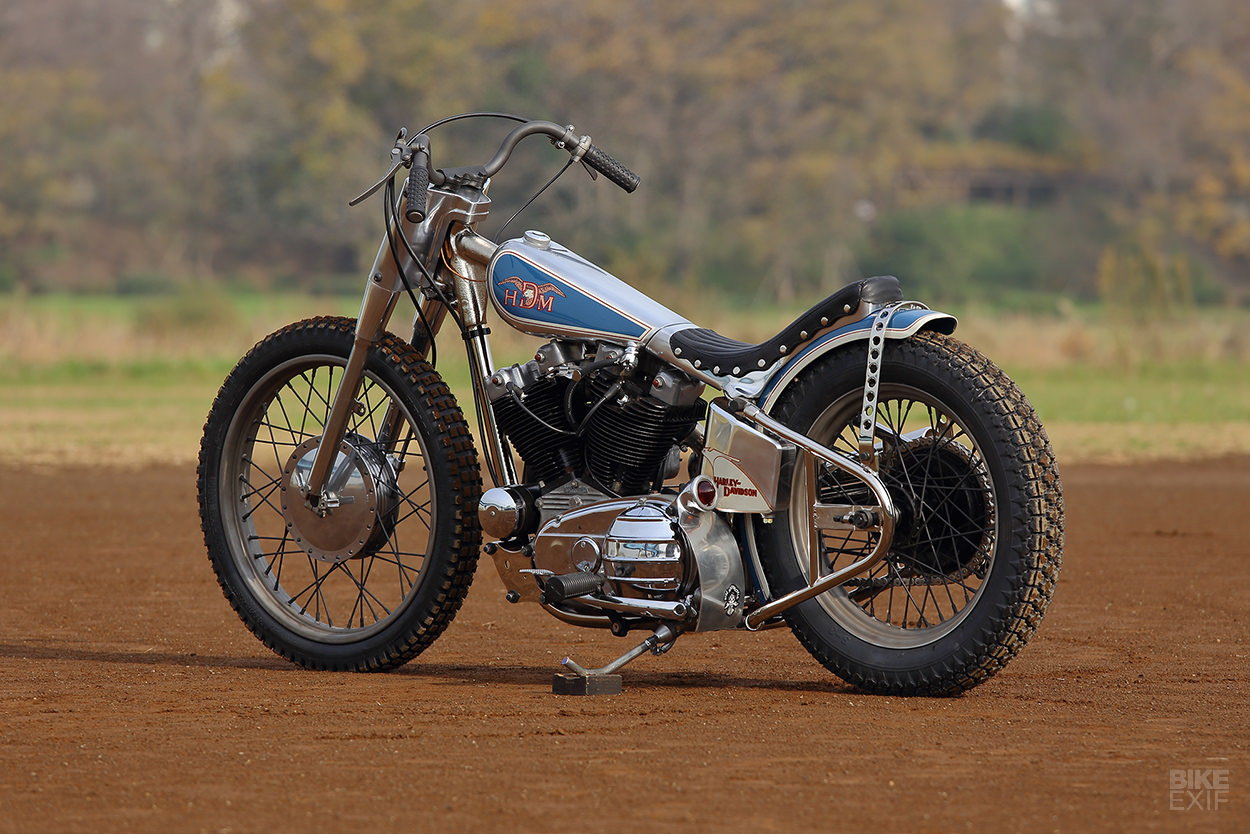 The paint’s extra classy too—a 1930s Harley scheme laid down by Skop Paint Works. Hide’s Ironhead blends vintage speedway and flat track styles together to create a minimalistic and impossibly cool machine. The perfect use of an Ironhead motor. [More] 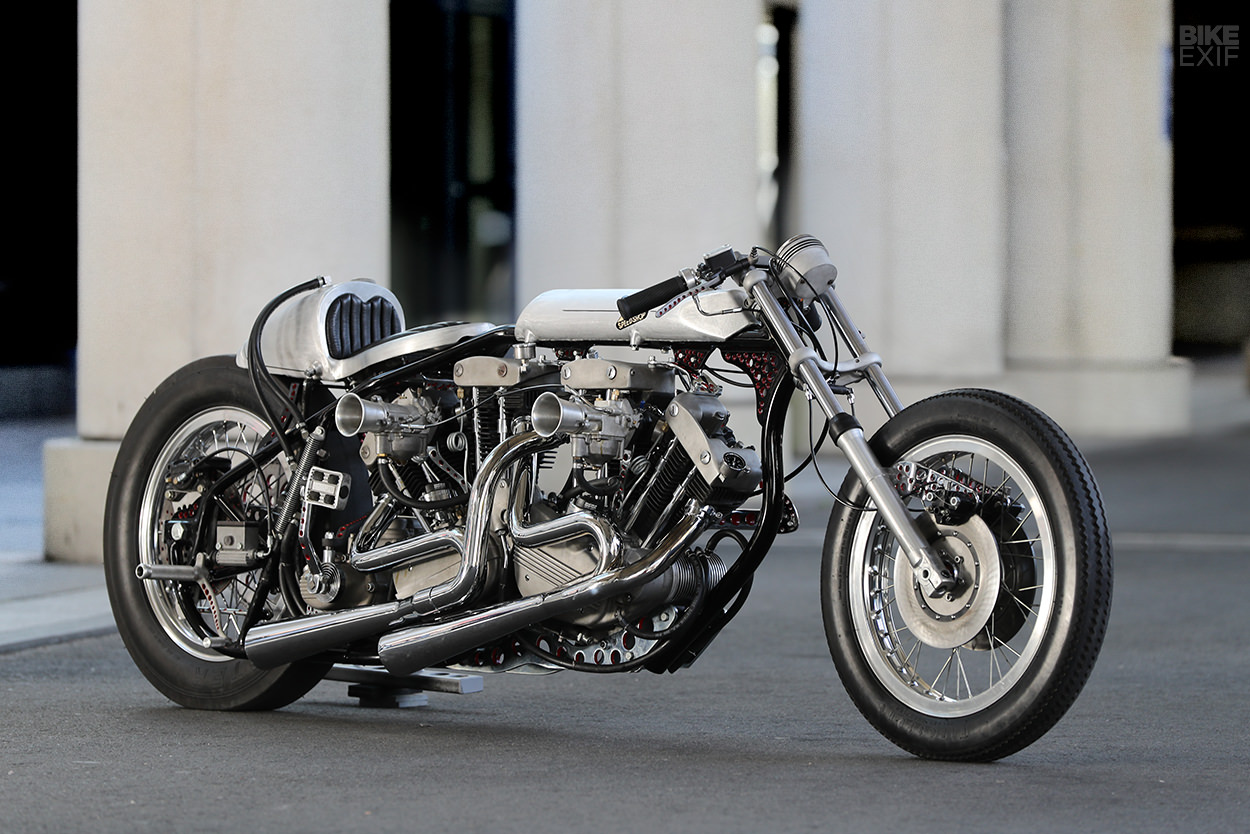 Hot Chop Speed Shop Here’s another bike that stopped visitors to the 2018 Mooneyes event dead in their tracks: a twin-engined Harley drag bike by Kentaro Nakano at Hot Chop Speed Shop in Kyoto. Using two Sportster XLCH engines, Nakano-san built the monster as a tribute to the drag racers of the 70s.

Unsurprisingly, it picked up two awards at the show—from the top Japanese mags, Hot Bike and Vibes. 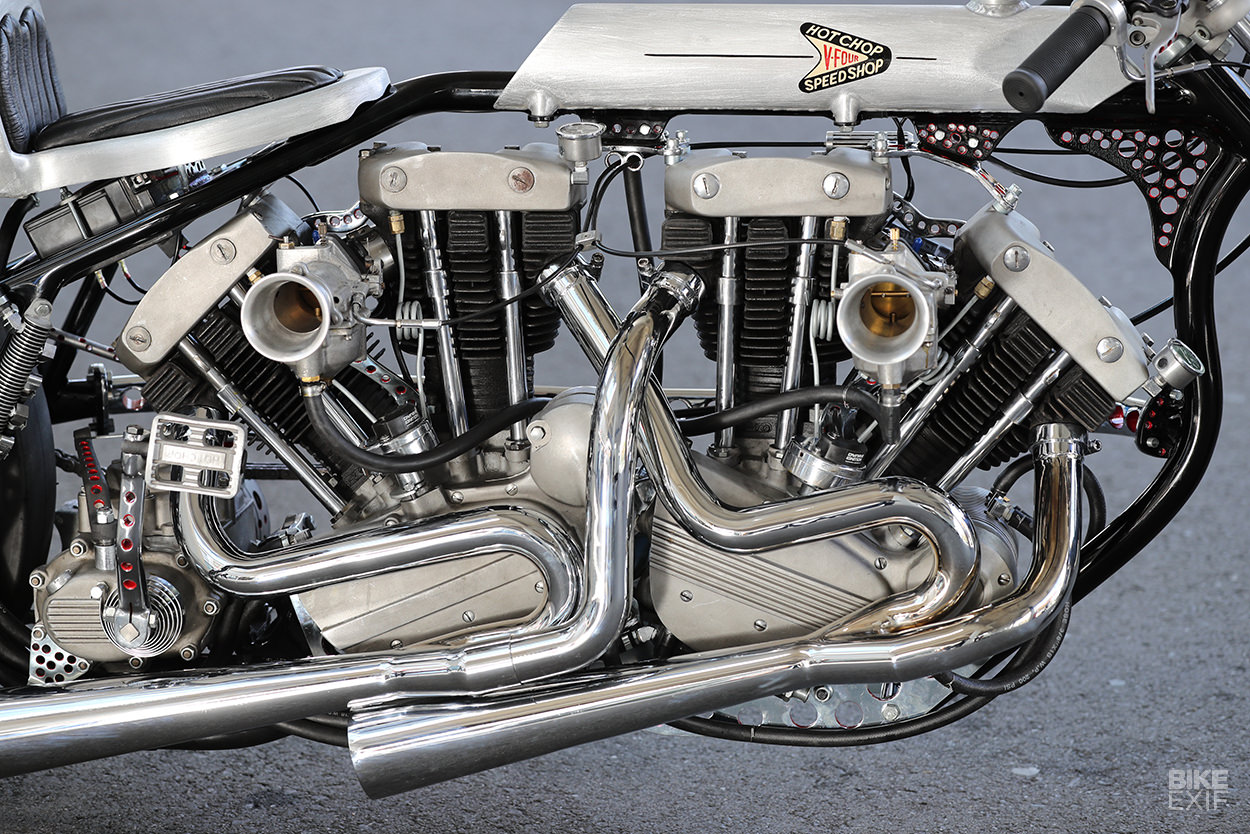 ‘Double Trouble’ uses a 1969 Ironhead in front, with an older engine at the rear. Both run with S&S Super B carbs, fitted with custom velocity stacks. Kentaro’s friend Kazuhiro Takahashi of Sakai Boring helped rebuild the engines.

The two V-twins are linked by connecting plates, and their output shafts are connected to two separate primaries. The transmission’s a four-speed from a 1980s Big Twin and Kentaro has set the timing of the two motors so that they go ‘potato potato’ at idle, but scream at high revs. 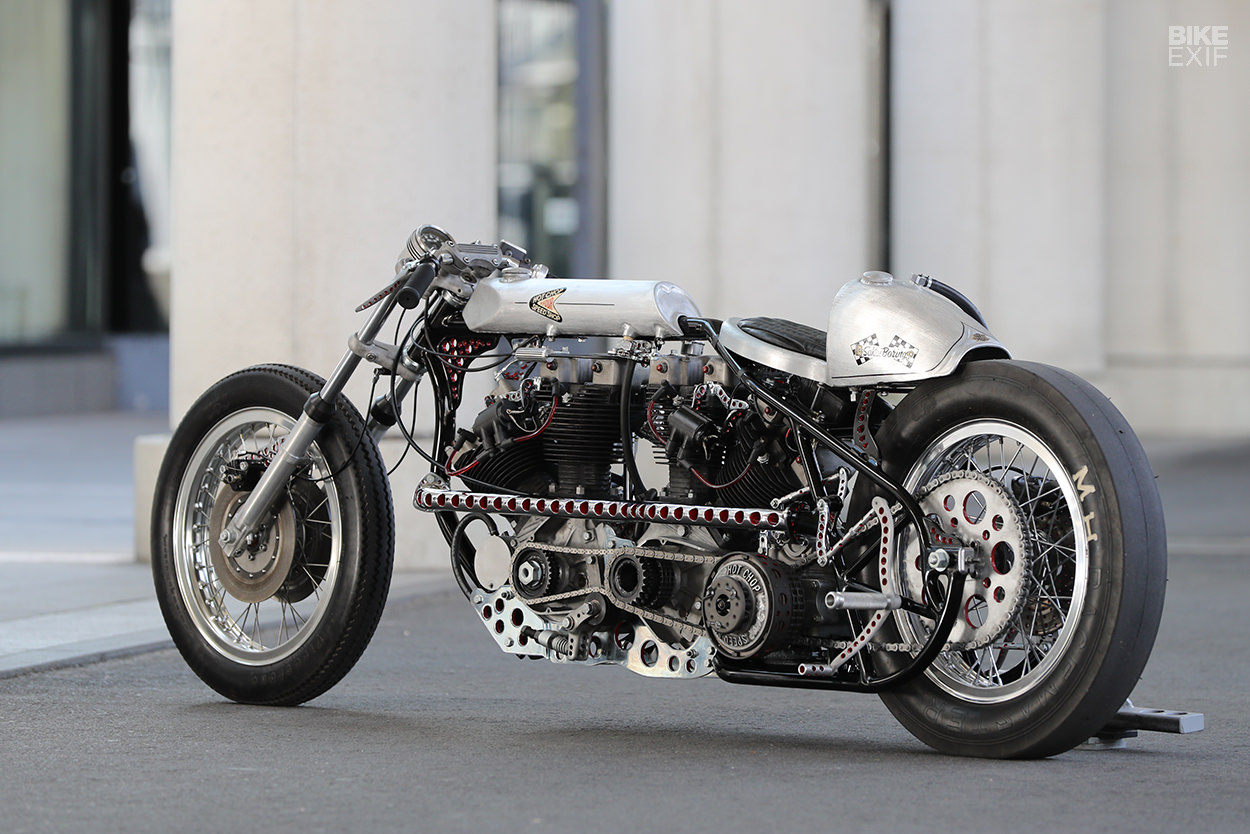 The whole arrangement is housed in a custom hardtail frame, fabricated from steel tubing. There’s a set of early 70s Ducati Imola forks up front, with 18” rims at both ends wrapped in M&H drag slicks. Kentaro installed a pair of Airheart brakes up front, with a Wilwood brake out back. 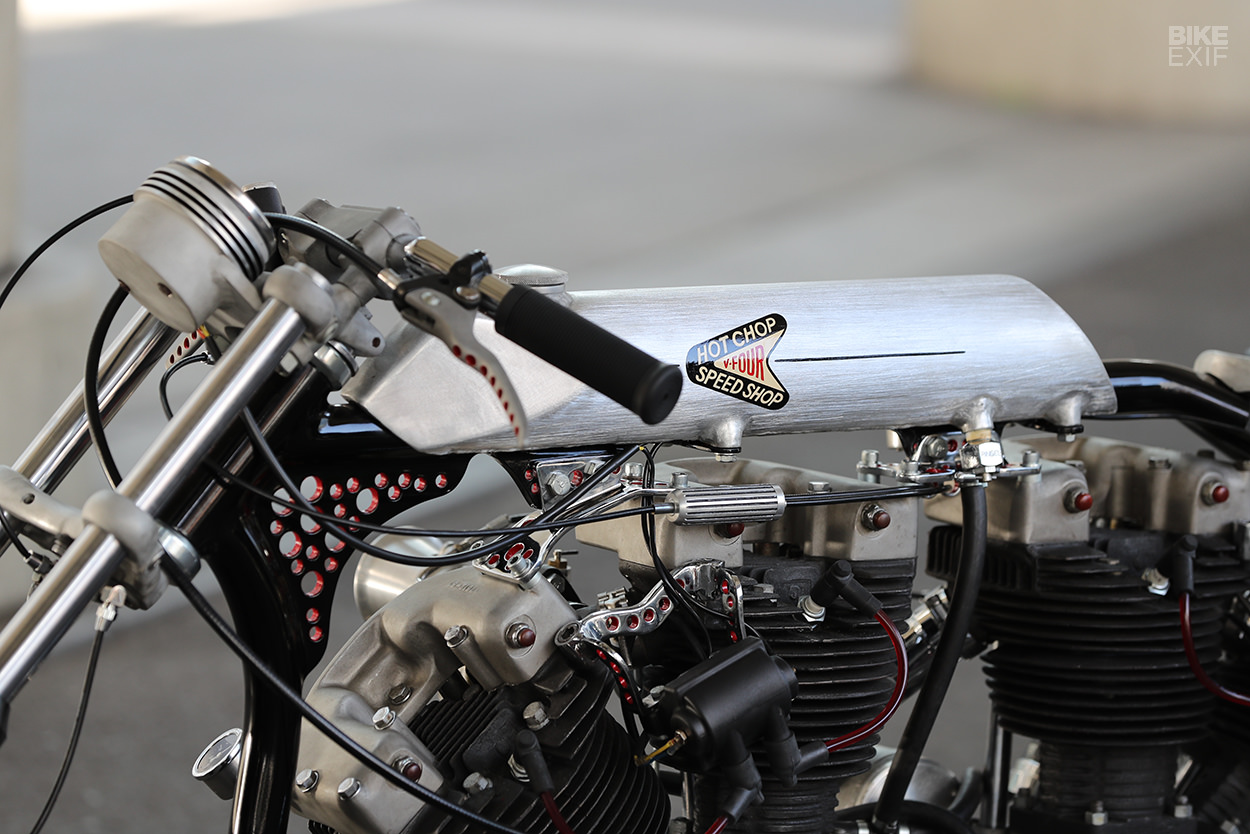 All of the bodywork was fabricated in aluminum, from scratch. Fuel sits in the cylindrical reservoir up front, with oil held in the seat ‘cowl.’ Custom upholstery from Atelier Cherry adds to the period-correct look.

Double Trouble’s finished off with a narrow set of custom drag bars, with a 1970s H-D tacho out front. The bodywork’s been left raw, with tidy Hot Chop Speed Shop decals on the tank. Buttoned up, it’s both elegant and monstrous. [More] 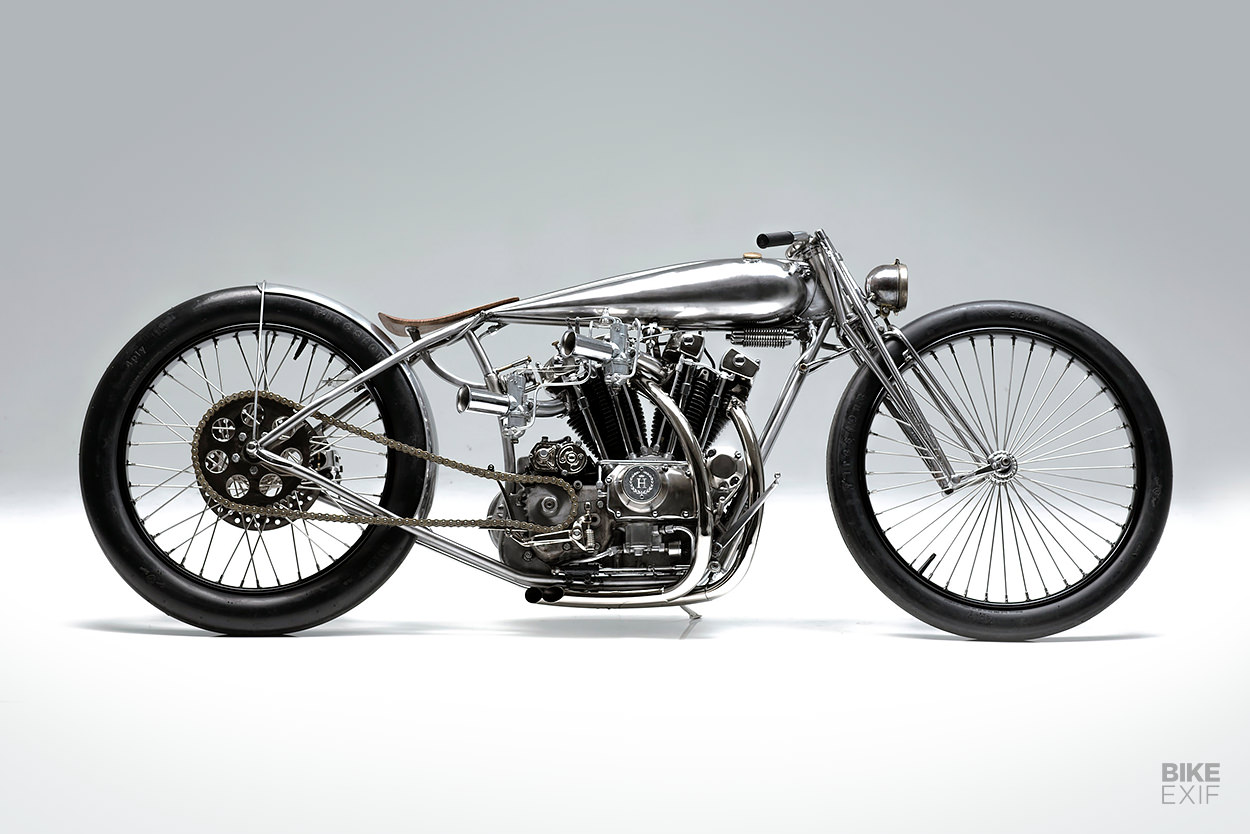 Hazan Motorworks Max Hazan’s work speaks for itself, but what’s remarkable is that the American builder’s had an unmistakable signature from day one. If you don’t believe us, then consider the fact that this Sportster-powered artwork was only his fourth build.

“I start with a motor that I find aesthetically pleasing, put it on the table, and build the bike around it,” Max told us back then. In this case, the motor is exquisite. Max built it up with two 1981 Ironhead front heads, split the rocker covers and added matching Amal carbs. 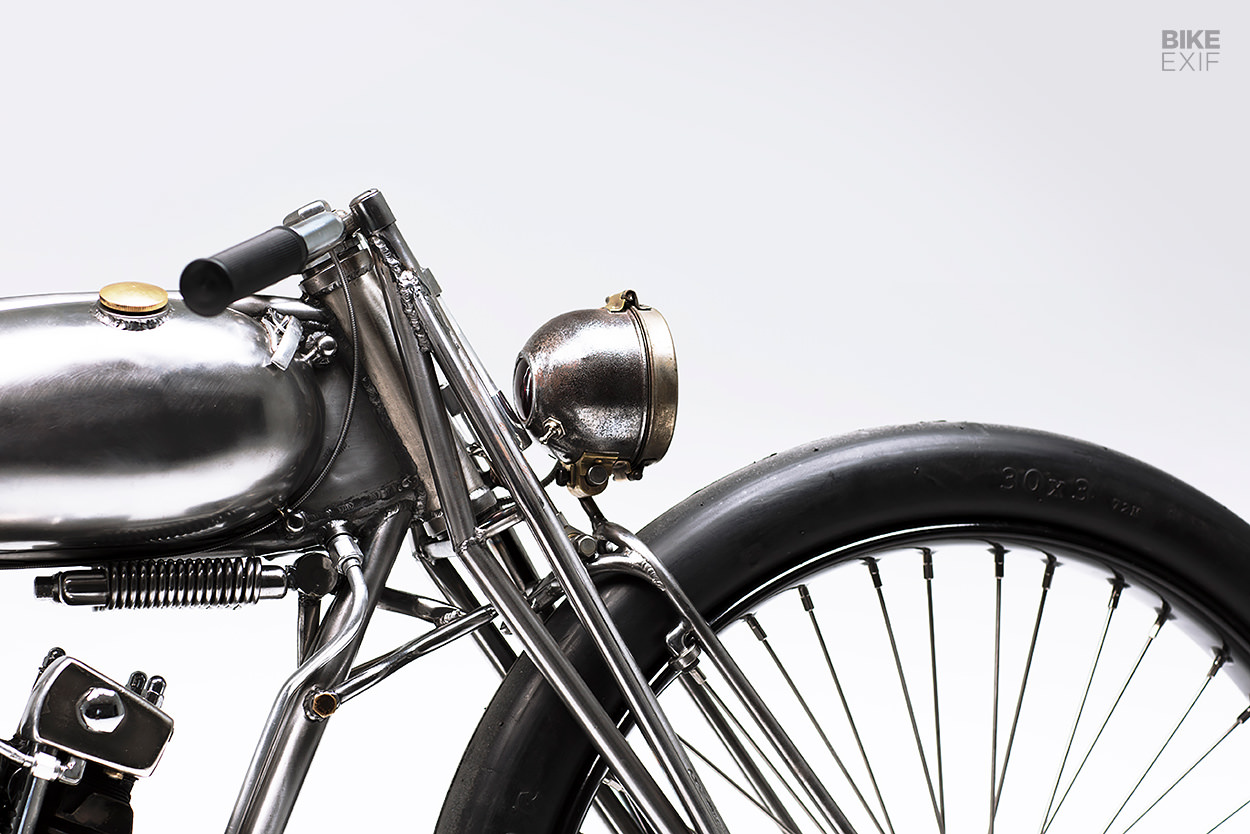 The frame was built from 7/8” and 1” steel tubes, and also holds the oil and wiring. The front-end’s a work of art on its own; it uses two springs under the fuel tank, and a damper behind the headlight. The only rear suspension is a pair of springs under the seat, with about 1.5” of travel.

Max had a set of 1920s car tires in his hands, so he built the bike up with a 30” wheel out front, and a 31” hoop at the back. They suit the scale of the bike too—which measures eight feet long, but weighs just 300 lbs. 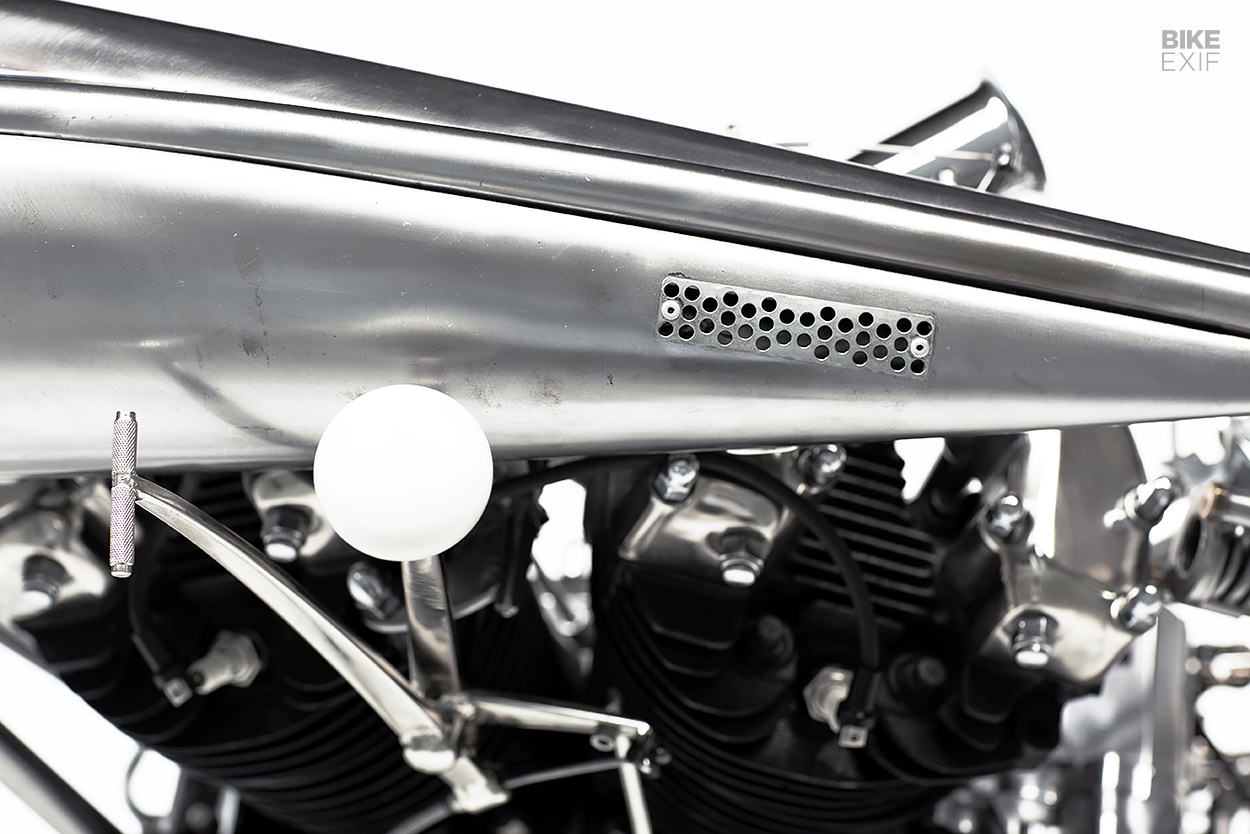 Almost everything was fashioned by hand, using metal that was lying around the workshop, or, in some cases, small salvaged parts. There’s a frosted shot glass as a taillight cover, and a porcelain doorknob on the hand shifter. The handmade tank only holds 1.5 gallons… but Max is under no illusions about his creation having to be ridden far.

Eight years on, this Ironhead still stands as one of our favorite Harleys—nay, customs—and some of Max’s best work. [More] 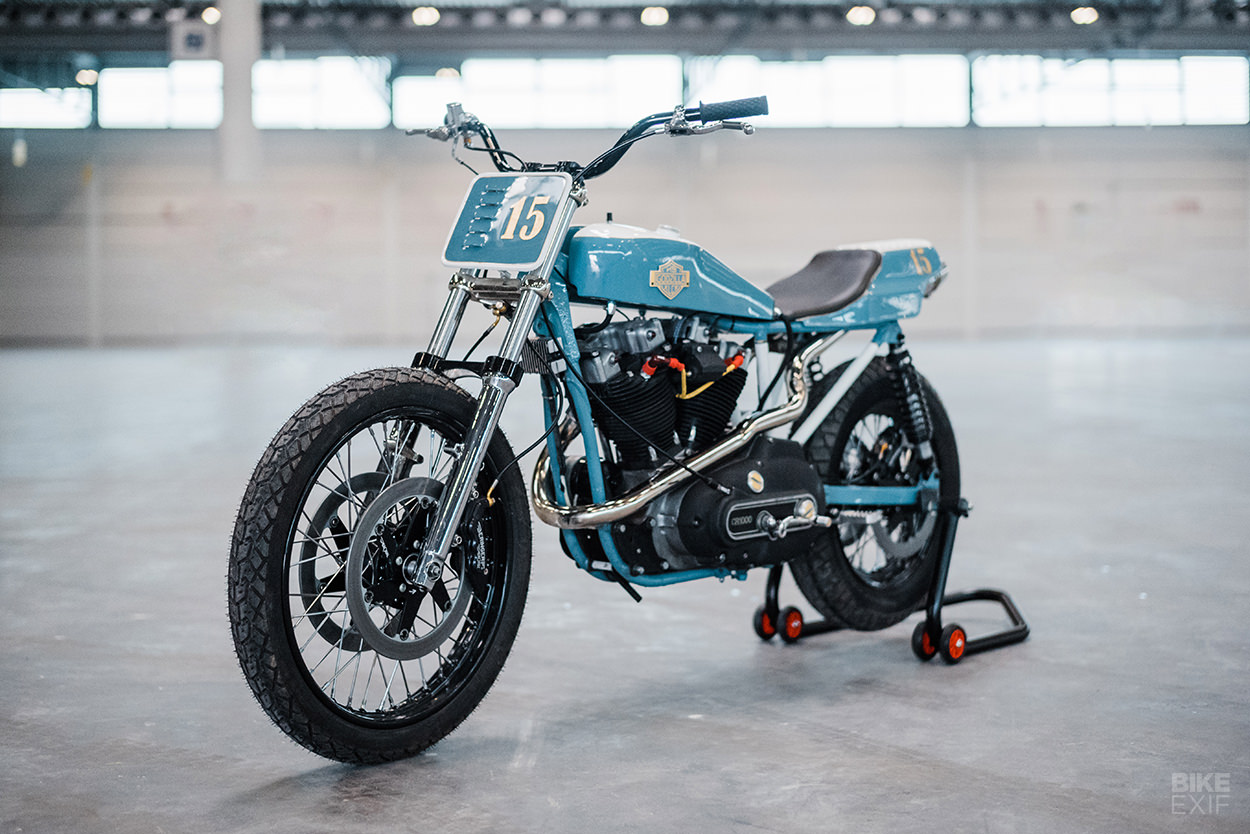 HardNine Choppers The 1979 Harley-Davidson XLCR is arguably too rare to be customized these days, but the owner of this Sporty has three. So he had no qualms about handing one over to Swiss builder Danny Schneider for a makeover.

Danny, who operates as HardNine Choppers, is an ex-motocrosser who had previously built two Triumph flat trackers, and was itching to give a Harley the same treatment. So he took on the project with the provision that he could turn it into a tracker. Luckily, the client agreed. 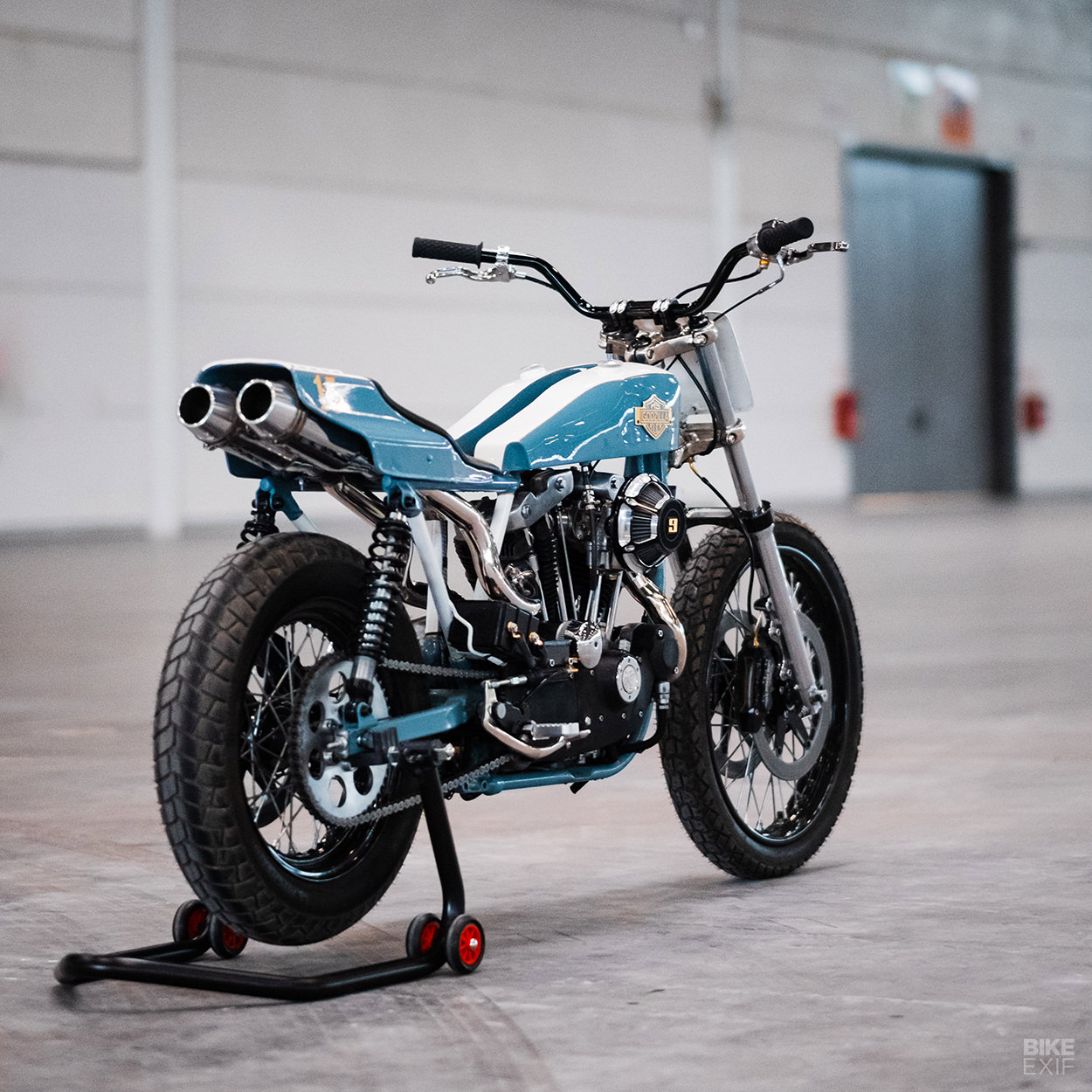 Danny’s work went deep—starting with the motor that he bored out from 997 cc to 1,340 cc, with KB Performance pistons. The carb is from the Harley performance specialists, S&S Cycle, and the exhaust is a custom nickel-plated system that exits under the seat. Danny had to relocate the oil tank to accommodate it. 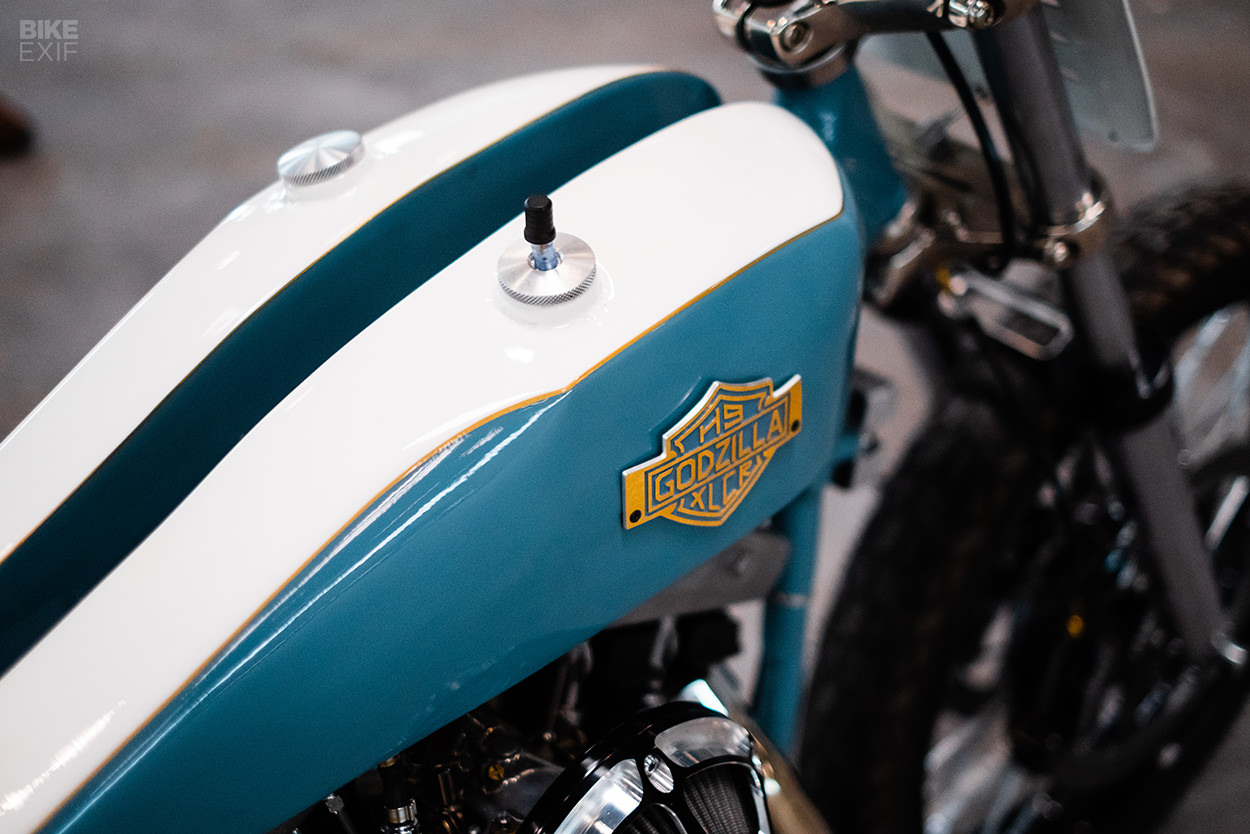 The custom fuel tank echoes the lines of the original XLCR unit, but it’s actually a slimmer, split design (the left side houses the oil). Danny hand-shaped an aluminum tail section too, with slits to help dissipate heat. He made the seat pad himself, too.

Suspension is by way of Showa shocks from an FXR, fitted with Öhlins cartridges, and Bitubo rear shocks. It rolls on 21F/16R spoked wheels, with a Beringer brake set that Danny drove to the French company’s HQ to have made. 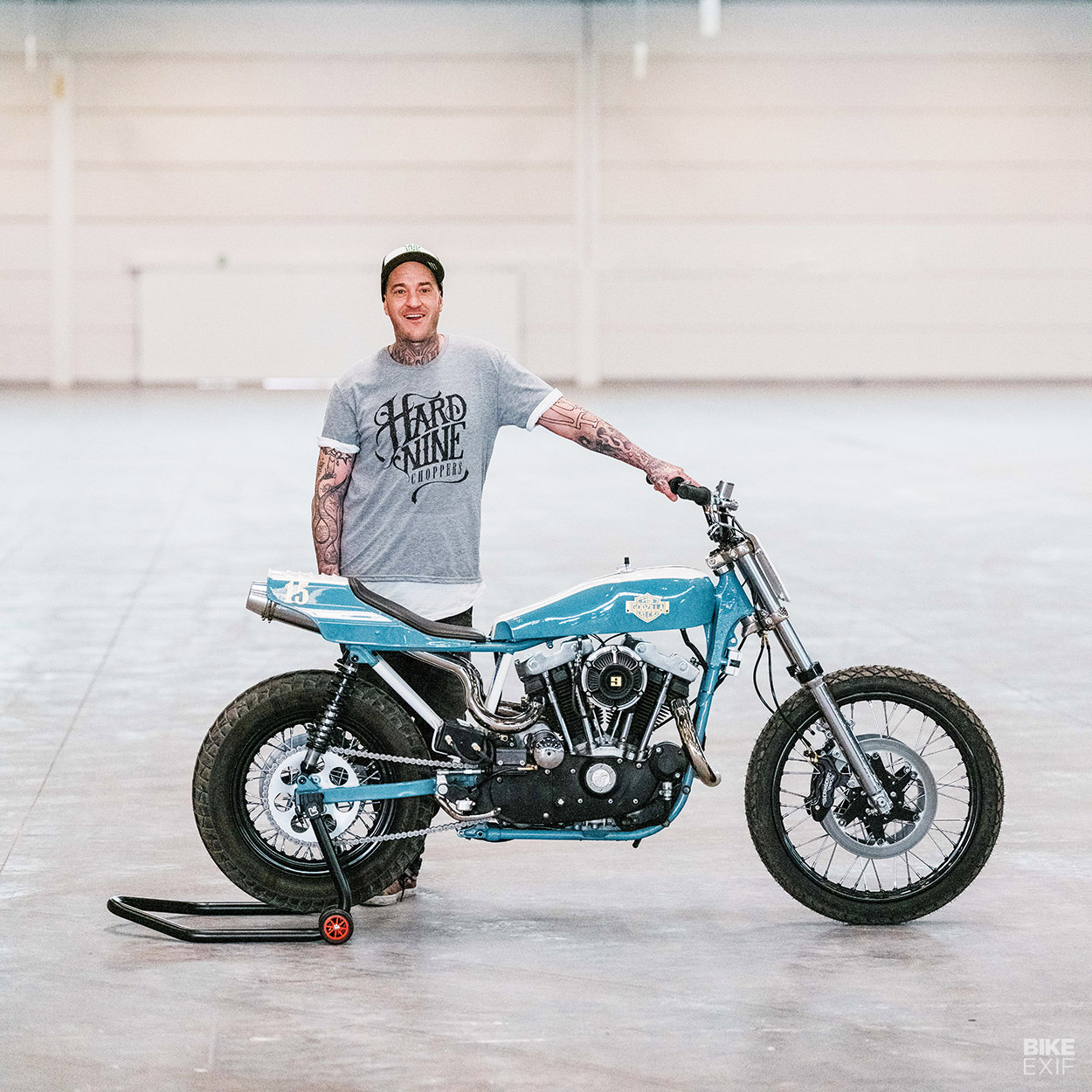 This XLCR is a clever mix of classic style and modern parts, tied together with a host of custom touches and a fresh paint job inspired by a mini-bike spotted on the street (true story).

It’s also a great story of perseverance; Danny took a two-year break in the middle of the project to welcome his daughter into the world and battle testicular cancer. Then he crammed two month’s worth of 15-hour days in to finish it in time for the MBE Expo show in Verona, Italy. Much respect. [More] 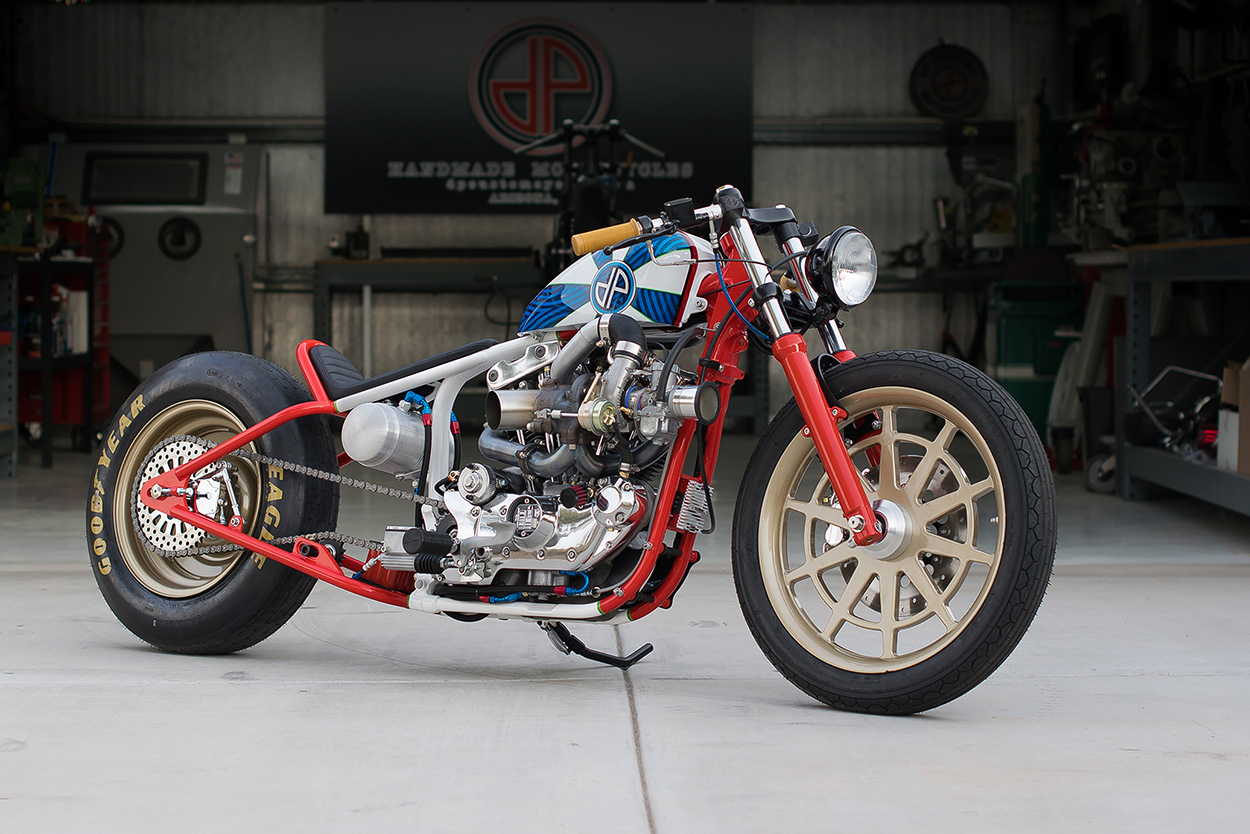 DP Customs We’ve featured a slew of slammed and hot-rodded Harleys from the now-defunct DP Customs over the years, but this was one of their wildest. Brothers Jarrod and Justin Del Prado built it as a personal project between client jobs, using Justin’s own 1000 cc 1979 Ironhead Sportster as a donor.

DP Customs went all-out, starting with a turbo that had been sitting in the shop waiting for the right project. 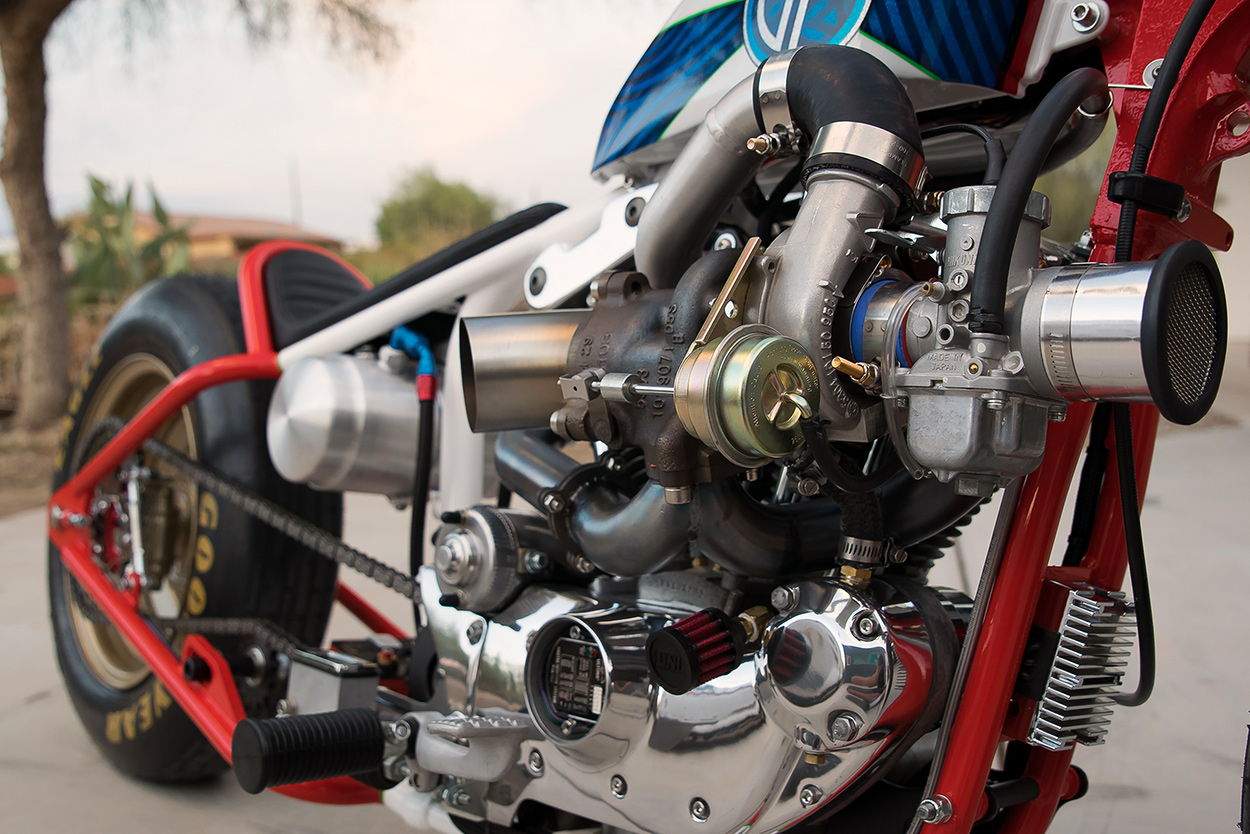 The motor was rebuilt with forged pistons and new valves and springs, then the turbo was installed with a custom draw-through setup, and a Mikuni carb. From the custom aluminum intake and exhaust, to the custom oil system that runs into a Mooneyes tank, it’s an impressive setup.

Like three of the other Harleys on this list, this one features a scratch-built hardtail frame. It uses DP Customs’ signature 6” stretch and 4” drop, with a custom 19” wheel up front, and a modified 15” car wheel at the back. The front brake’s a Brembo, and the rear is a custom system with a combination sprocket and rotor. 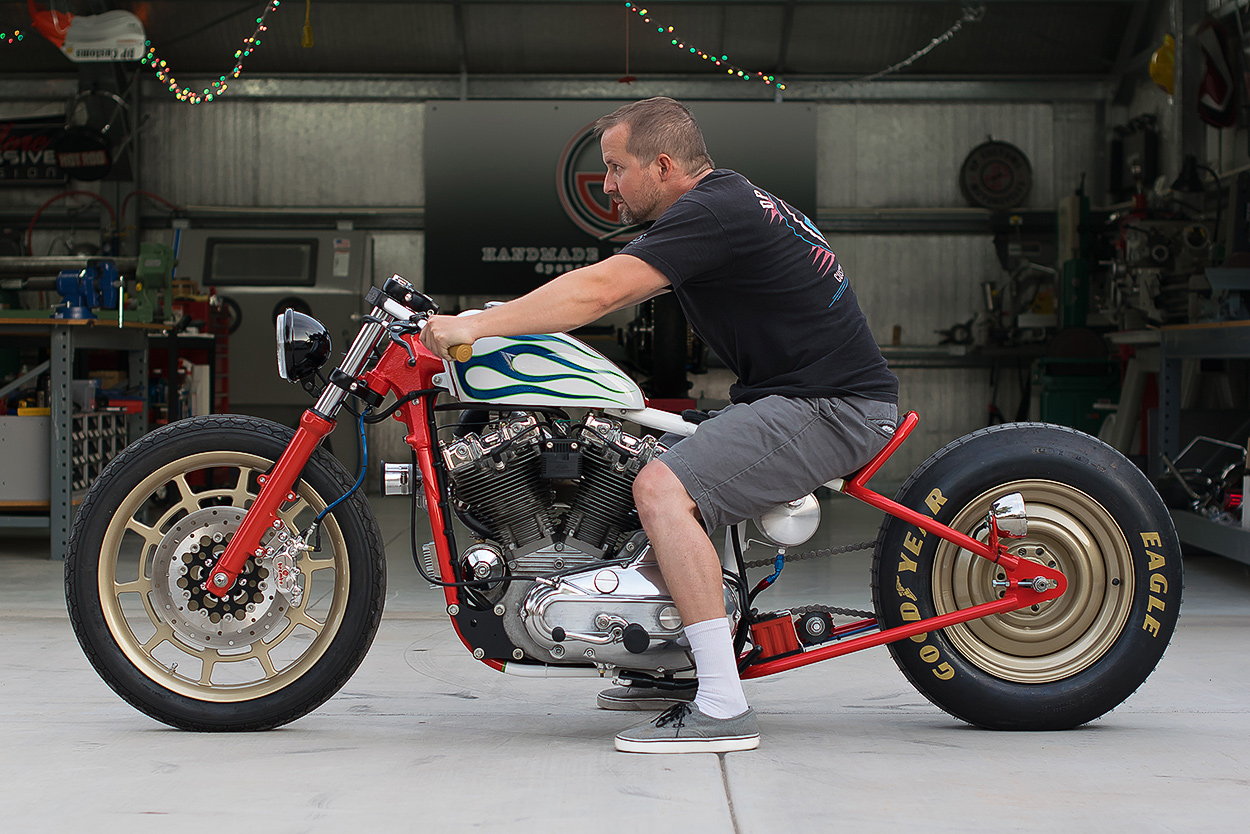 Up top is a wafer-thin seat, with a traditional peanut tank up front. DP Customs installed clip-ons with Biltwell Inc. grips, and head- and taillights—but there’s no speedo, and no turn signals. The asymmetrical paint job, red frame and gold wheels should clash, but somehow they harmonize, maximizing the Harley’s eye candy appeal.

DP Customs admit the bike wasn’t built with practicality in mind, summing up that “it hauls ass in a straight line, and the brakes work.” [More] 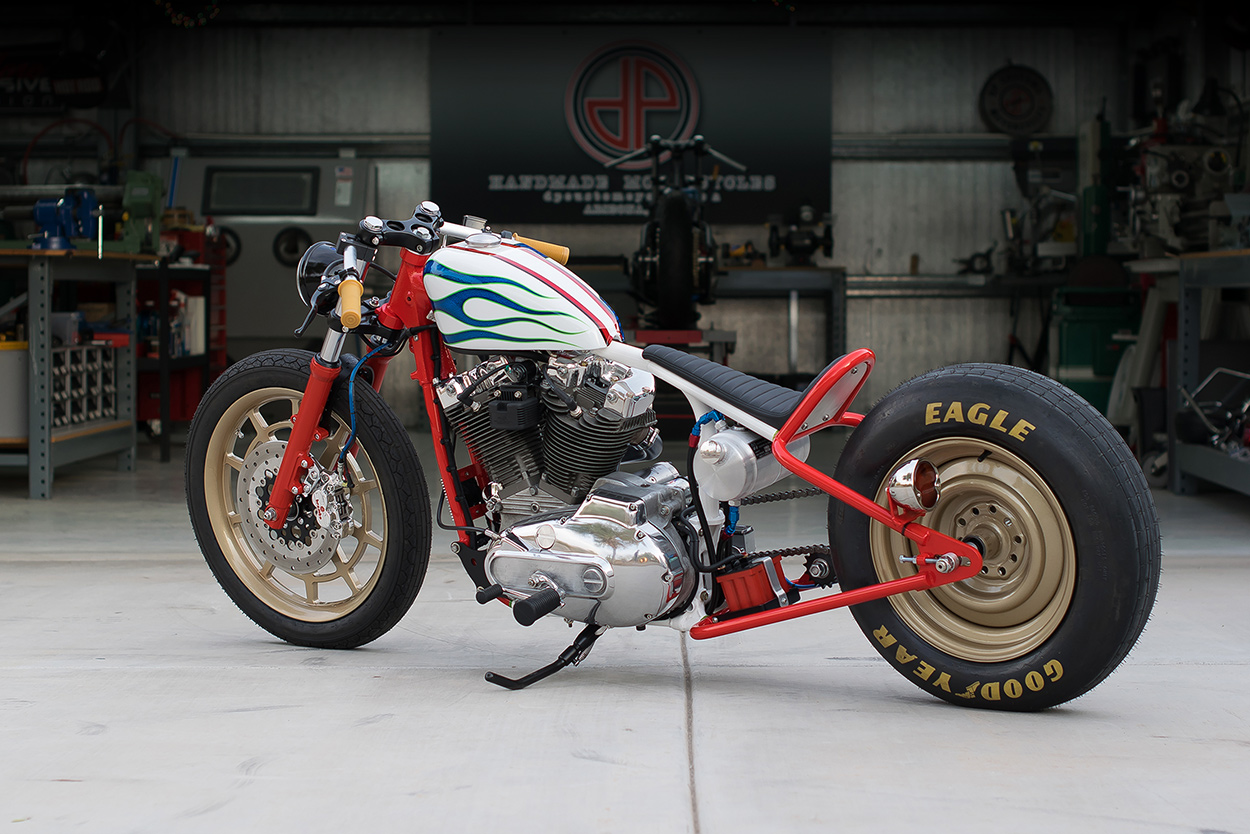