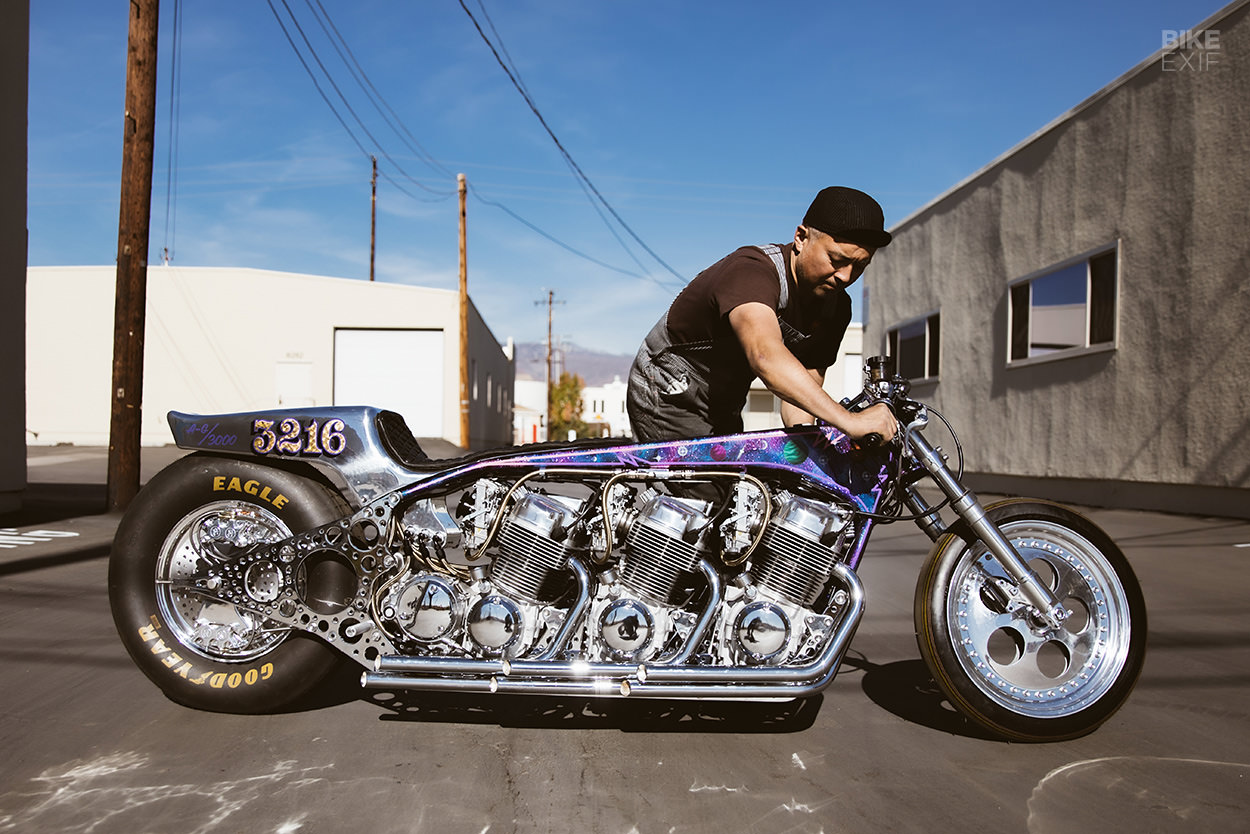 Land speed racing has a way of inspiring outrageous engineering. The most common motivation is a relentless pursuit of outright speed. Other times, it’s driven by a desire to build something that’s truly out of this world. Shoving three bored-out Honda CB750 motors into one land speed racer is probably a little bit of both.

This, in all of its 12-cylinder, 2,508cc glory, is The Galaxy. It’s the creation of California-based custom motorcycle builder and mad genius, Mitsuhiro “Kiyo” Kiyonaga, and his childhood dream brought to life.. 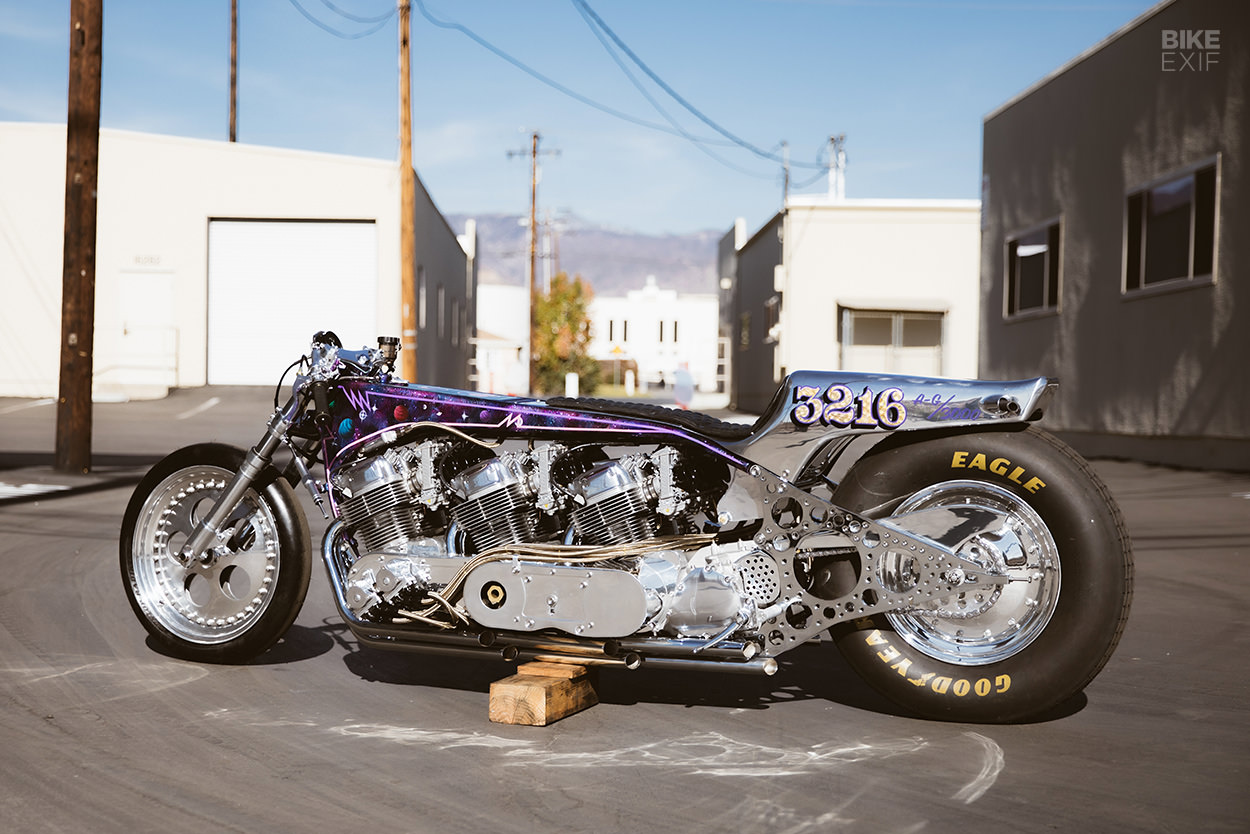 Kiyonaga-san opened Kiyo’s Garage in Los Angeles in 2013. Around the same time, he built ‘Cherry Blossom,’ a stretched land speed racer with a turbocharged Honda CB750 motor in a scratch-built frame. A few years later ‘Gekko’ followed—another 1970s top fuel-style bike, except this one had two CB motors.

The Galaxy continues Kiyo’s obsession with this theme. “The concept common to all three is a land speed racer with the beauty of a show bike, which can actually run,” he explains. 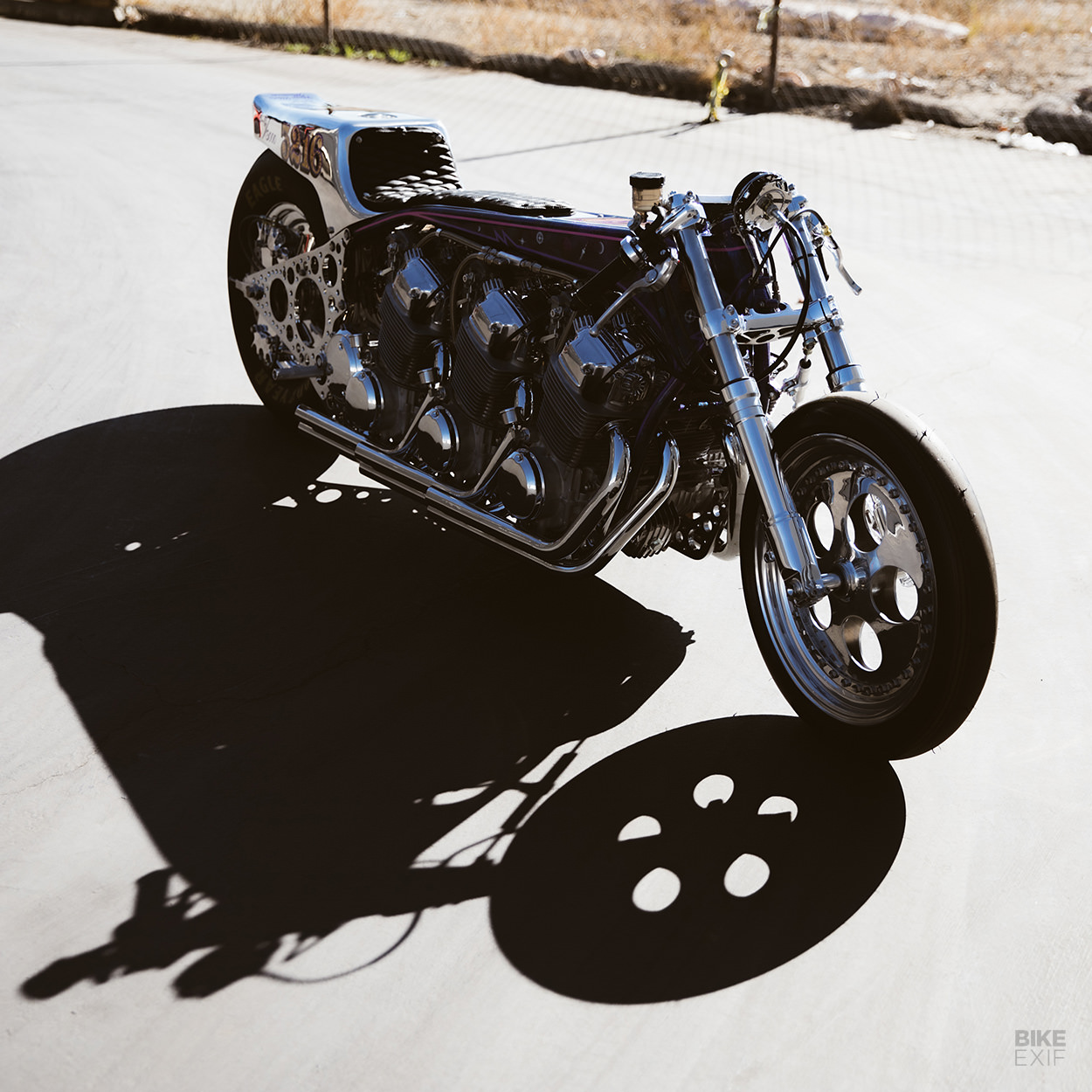 “There is a culture called ‘Kacho Fugetsu’ in Japan, which translates literally as flower, bird, wind, moon. But its meaning is the traditional beauty of nature in Japanese aesthetics, and the rhyme of nature. Some write poetry, some sing songs, and some express it in pictures. I want to express Kacho Fugetsu in our machines.”

Kiyo had dreamt of building The Galaxy for a long time, but the project only materialized when he visited the Haas Moto Museum to discuss their acquisition of Cherry Blossom and Gekko. While there, Kiyo also presented owner Bobby Haas and director Stacey Mayfield with sketches of his three-engined concept. Bobby was hesitant at first, but eventually reached across the table, shook Kiyo’s hand and commissioned the project. 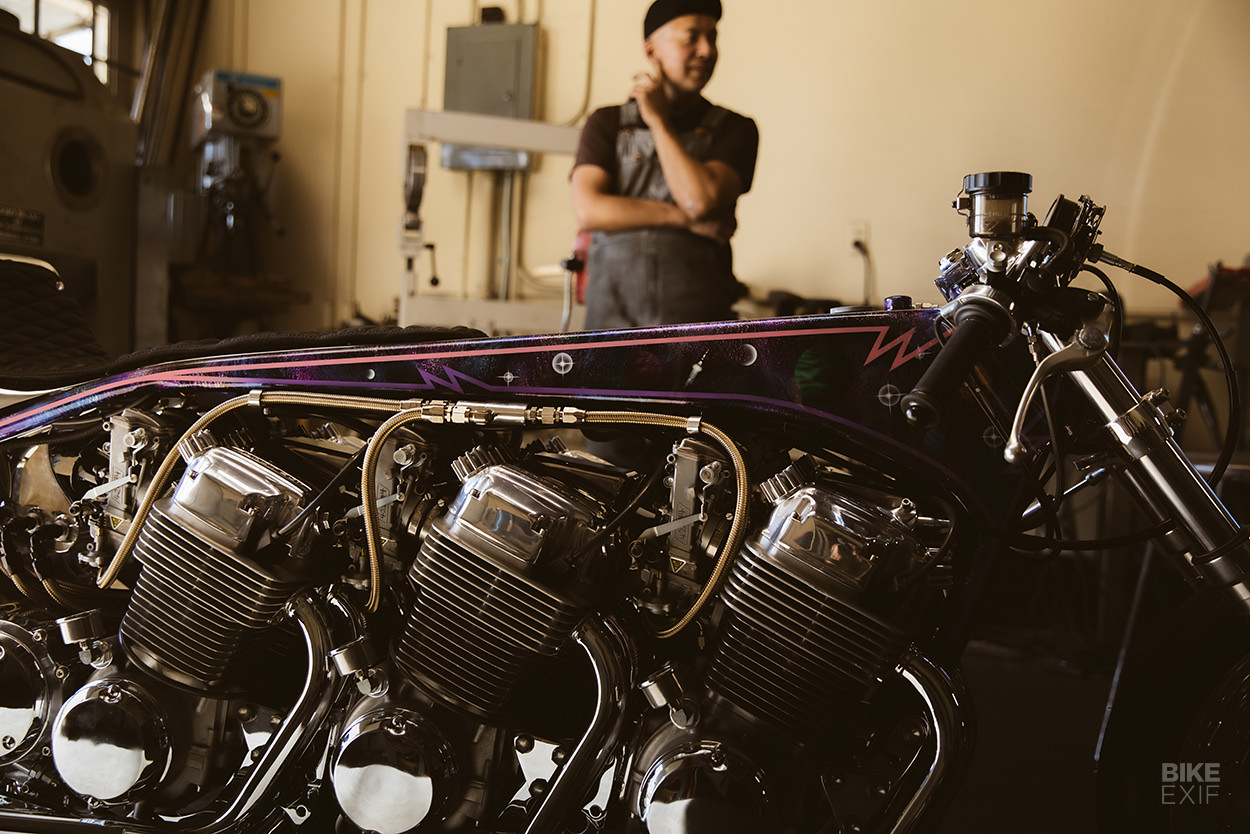 Even though Kiyo already had a twin-engined bike under his belt, the step up to three was daunting. “I was skeptical about whether it was possible or not,” he confesses. “However, when I started making it, that anxiety disappeared, and I was able to complete a mechanism that was surprisingly efficient, simple, and fully functional.”

The Galaxy’s four-cylinder power plants are all 1978 Honda CB750 units with F2 large port heads. Each motor has been bored out to 836 cc, and fully rebuilt with lightened and balanced crankshafts, heavy-duty connecting rods, performance cams and oversized stainless steel valves. Extra care was taken to make sure each motor’s internals conformed to the exact same spec. 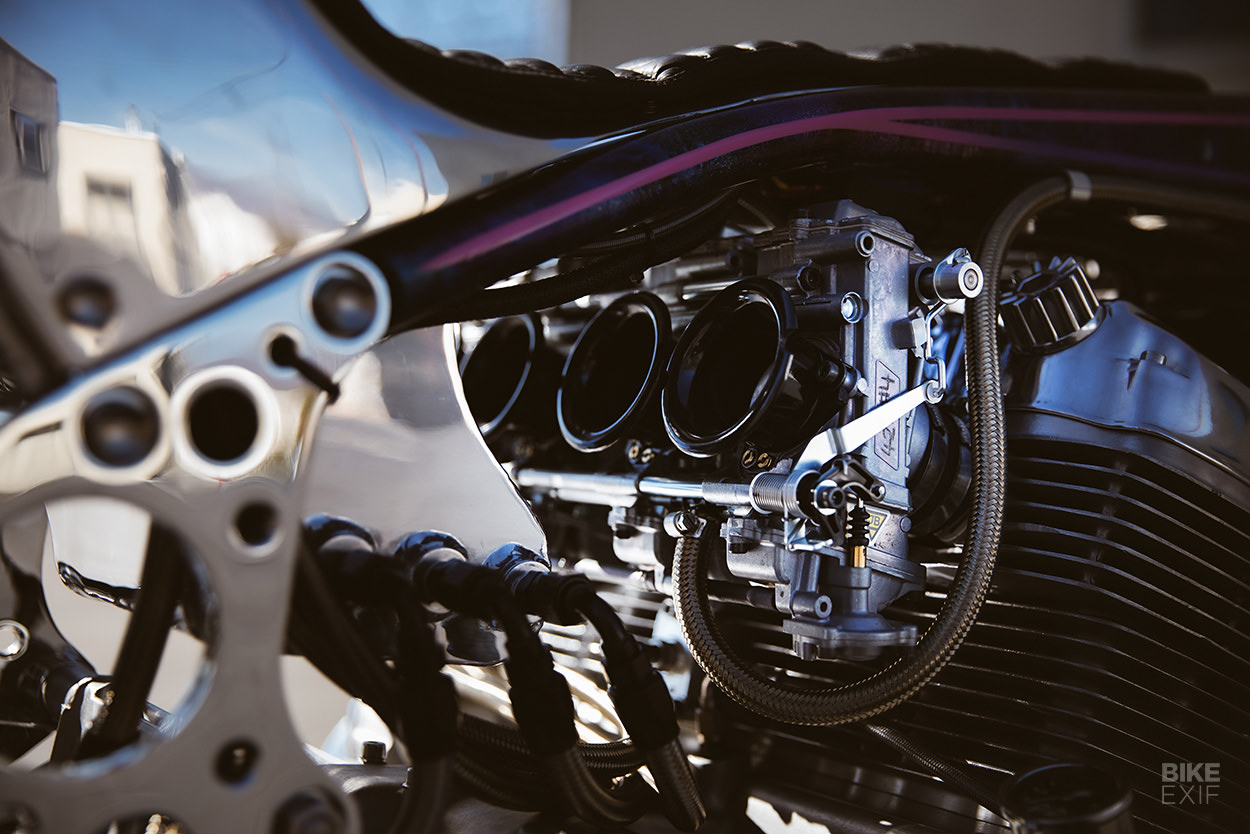 The motors are each fed by four Keihin FCR 35 mm carbs, with significant work to the intake manifolds to help them run optimally. All three carb sets are linked via a rod-and-heim joint setup, to make it easier to synchronize the throttle slider. But rejetting is still a chore, given that there are 12 carbs to fettle. The entire setup breathes out through twelve custom-made exhausts.

One big challenge was splitting the number one and two engines’ transmissions—a process Kiyo nonchalantly refers to as “simply cutting off unnecessary transmission parts.” The rebuild included fabricating new covers, relocating the oil pumps to sit externally, and working out a custom-built system to circulate oil through all three motors sufficiently. 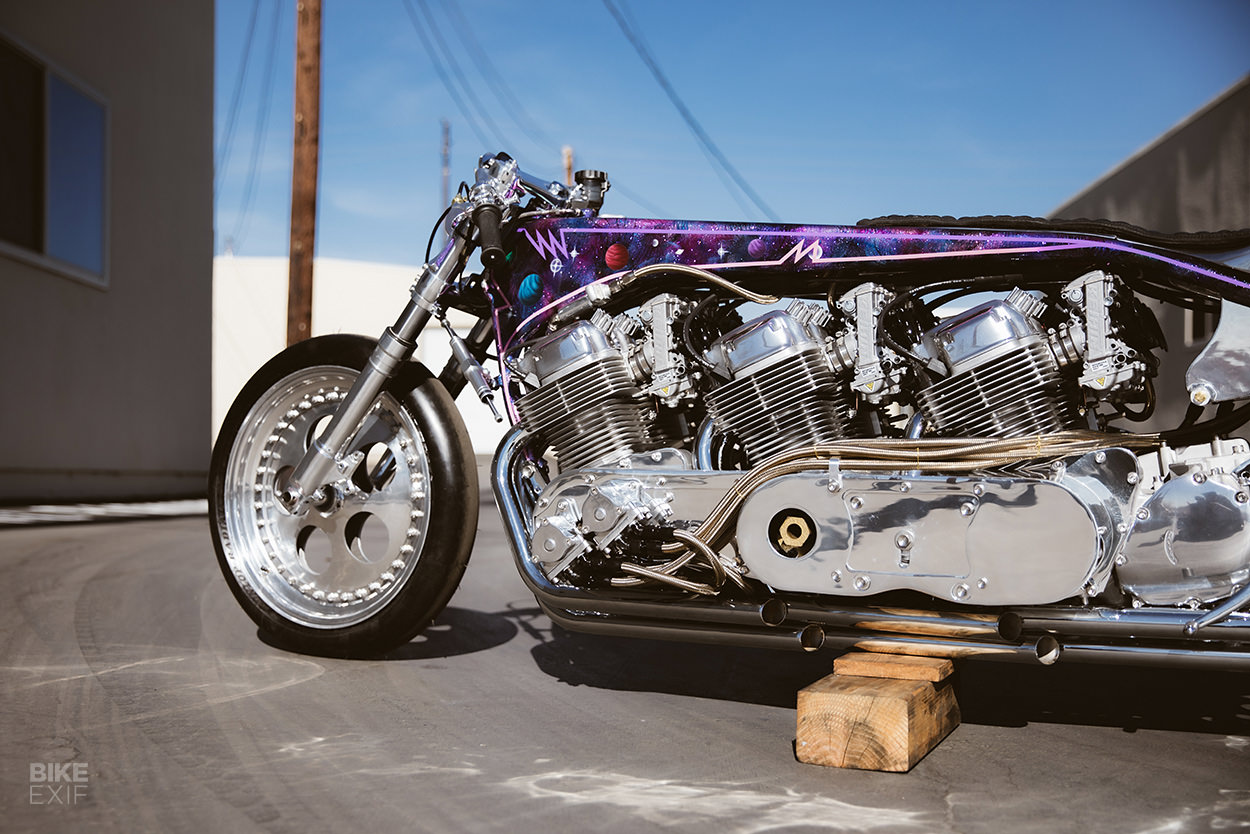 Even harder was constructing a primary system that would connect all three mills. What’s more, Kiyo was adamant that the system be easy to maintain under race conditions, so he limited himself to using easily obtainable parts.

The resulting setup looks dead simple from the outside, since Kiyo removed the starter motor and built a ‘flat’ primary cover. But inside, there’s a complex system of pulleys, mounts and adjusters that will melt your brain, with the role of every part—and how it relates to the next part—considered in painstaking detail. 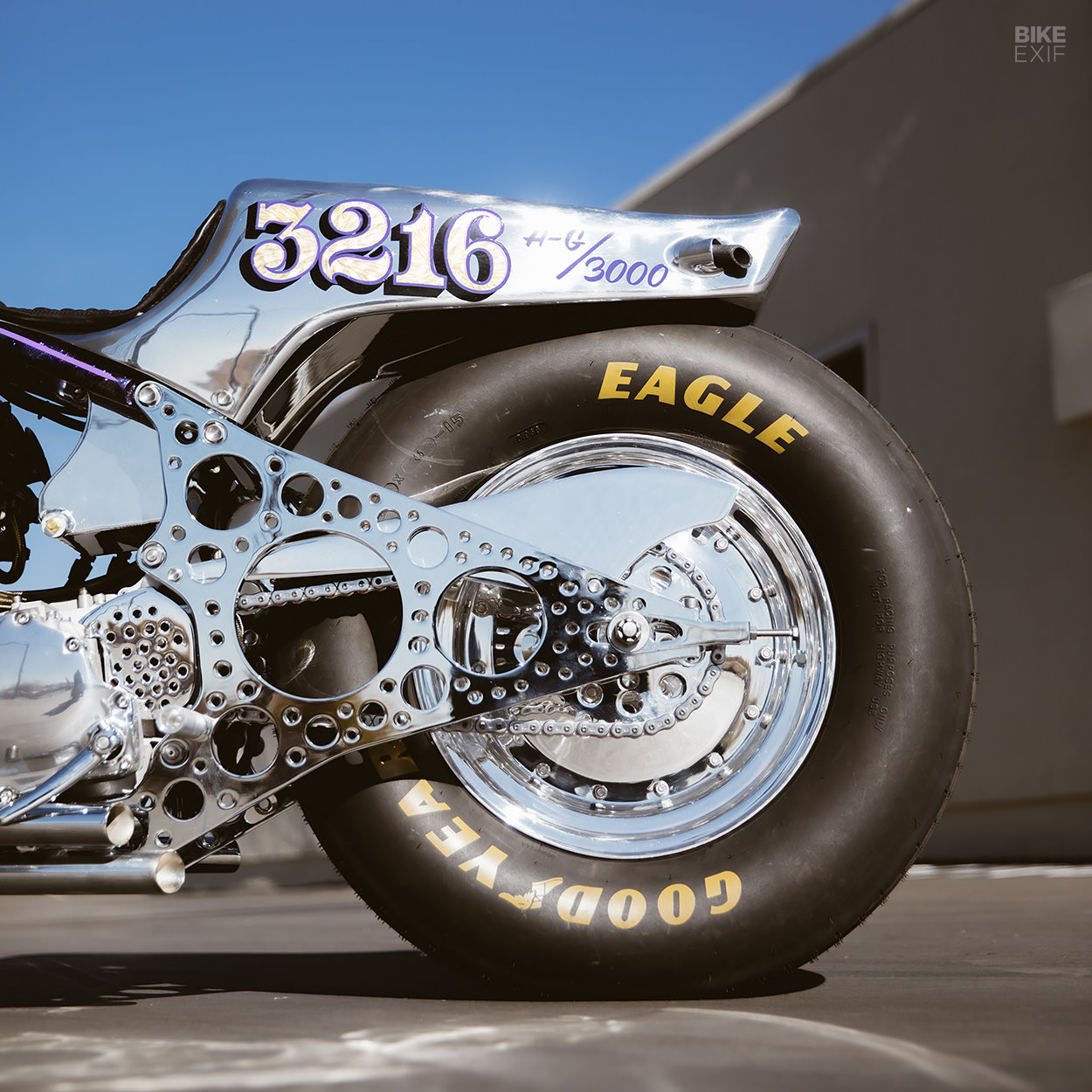 A three-piece chassis holds the trio of motors together: a tubular upper frame, and two large engine mounting plates that double up as a rigid ‘swingarm.’ Together with the extensive drillium on the rear plates, it’s part of the design language that defines Kiyo’s trilogy of land speeders.

The front half of The Galaxy’s bodywork is integrated with the frame, and hides the fuel tank and pump, battery, and everything else it needs to run. The tailpiece is a hand-hammered aluminum piece, which also carries the 2.5 gallons of oil that the three Honda engines require. The tiny port sticking out at the back is actually an outlet for the engine breather hose. 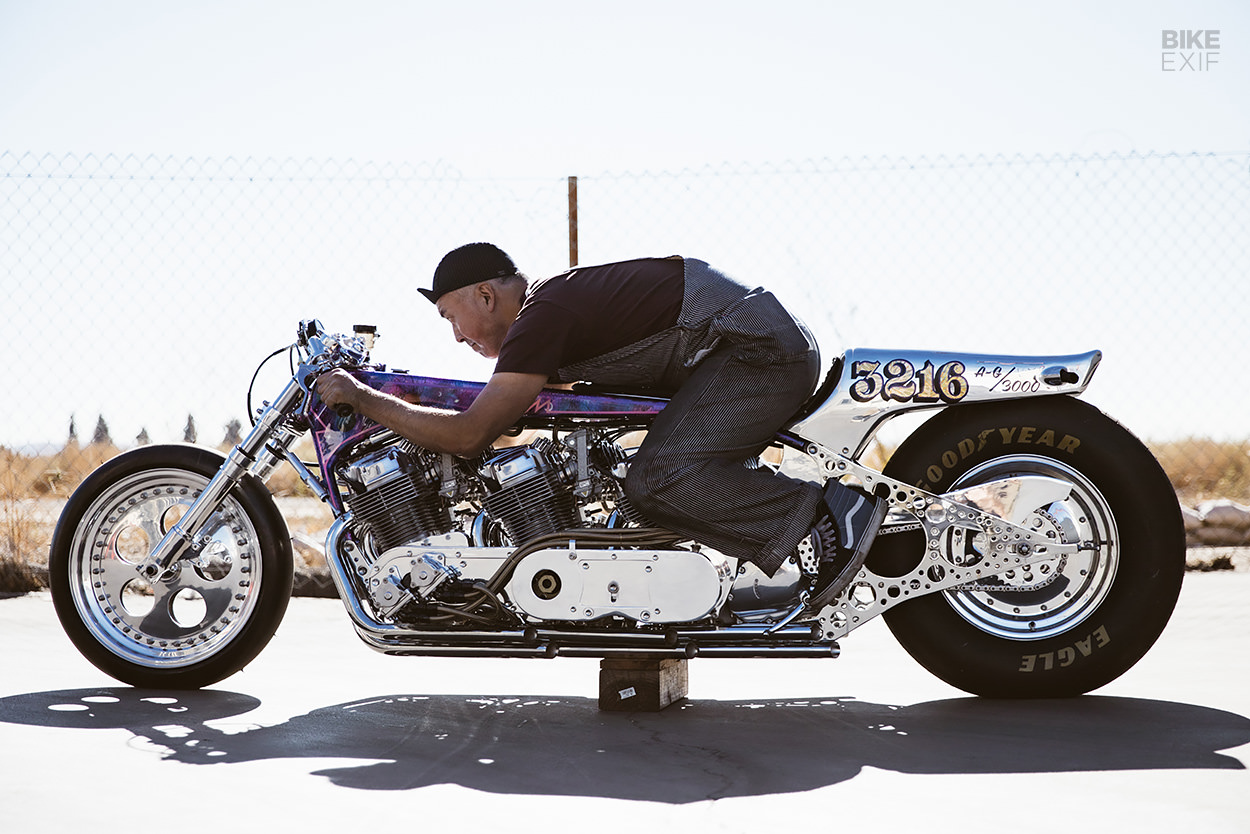 Aluminum spun wheels bookend the machine, with holes cut into the front to reduce the effect of crosswinds at speed. The influence of 70s top fuel dragsters is unmistakable in the silhouette, and in the stretched-out ergonomics. The ‘rider triangle’ was carefully judged, offering massive control and knee grip when pinning it across salt flats.

Everything on The Galaxy was handmade, without the aid of CAD software or CNC machines—just the way Kiyo likes it. 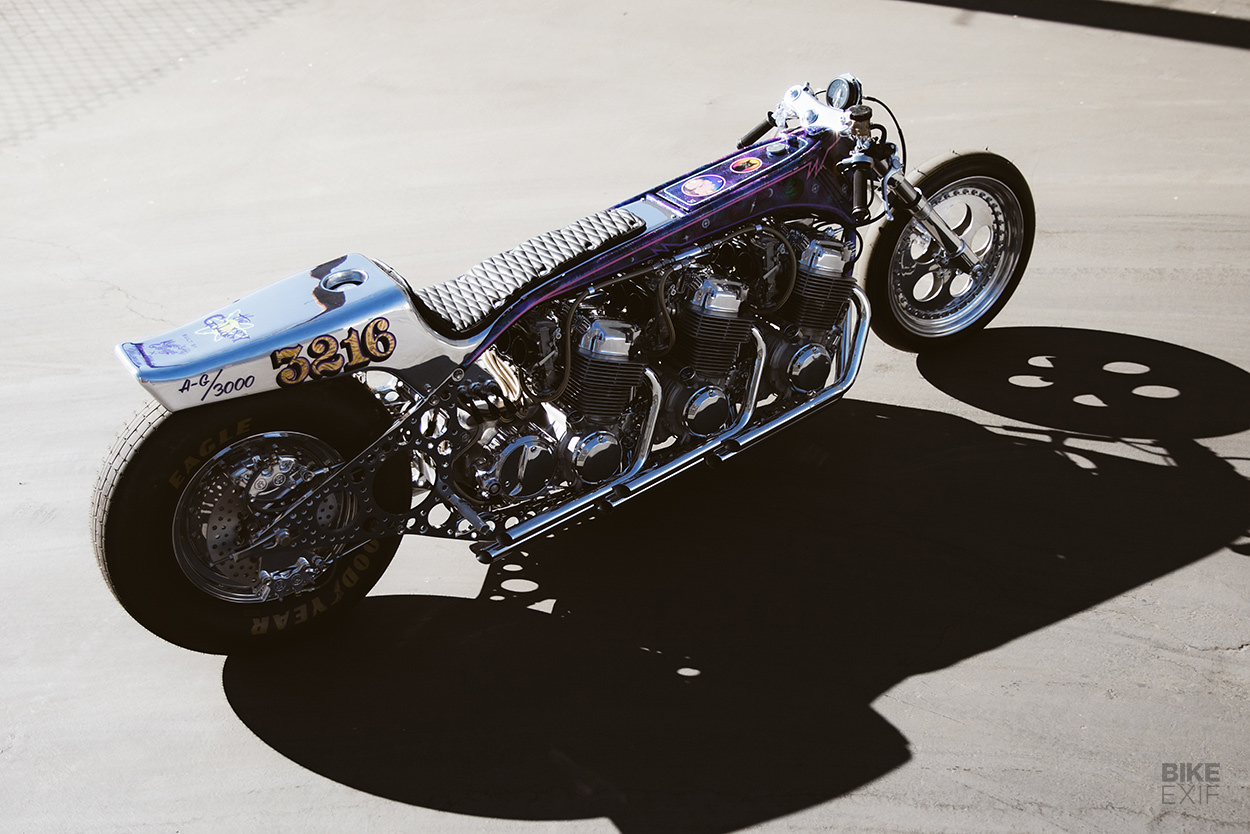 “I am more attracted to the warmth unique to handmade products,” he says, “such as roughness, unevenness, and left-right asymmetry, which is finished by hitting, bending, and shaving, rather than an accurate and unrivaled mechanical finish. That is the big joy of creating one with my own hands.”

When it came to the paint job though, Kiyo took his hands off, giving total creative freedom to the same artist that painted the previous two bikes: Gen Katsuragawa at Love Ear Art. The overall effect is surprisingly whimsical, belying just how potent this machine actually is. 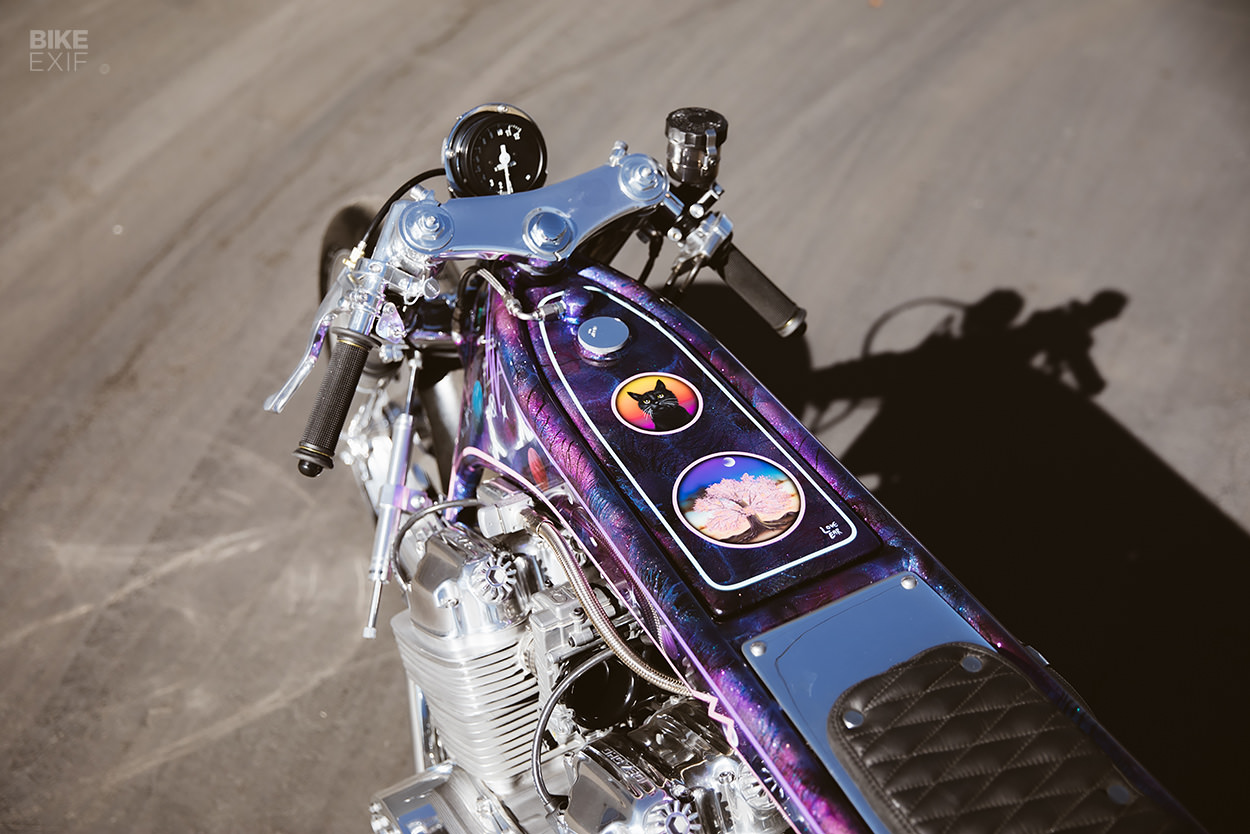 The Galaxy has now taken up residence in the Haas Moto Museum alongside its siblings, but Kiyo doesn’t consider it complete. Before he ticks that box, he has one more challenge to face: racing it at Bonneville. 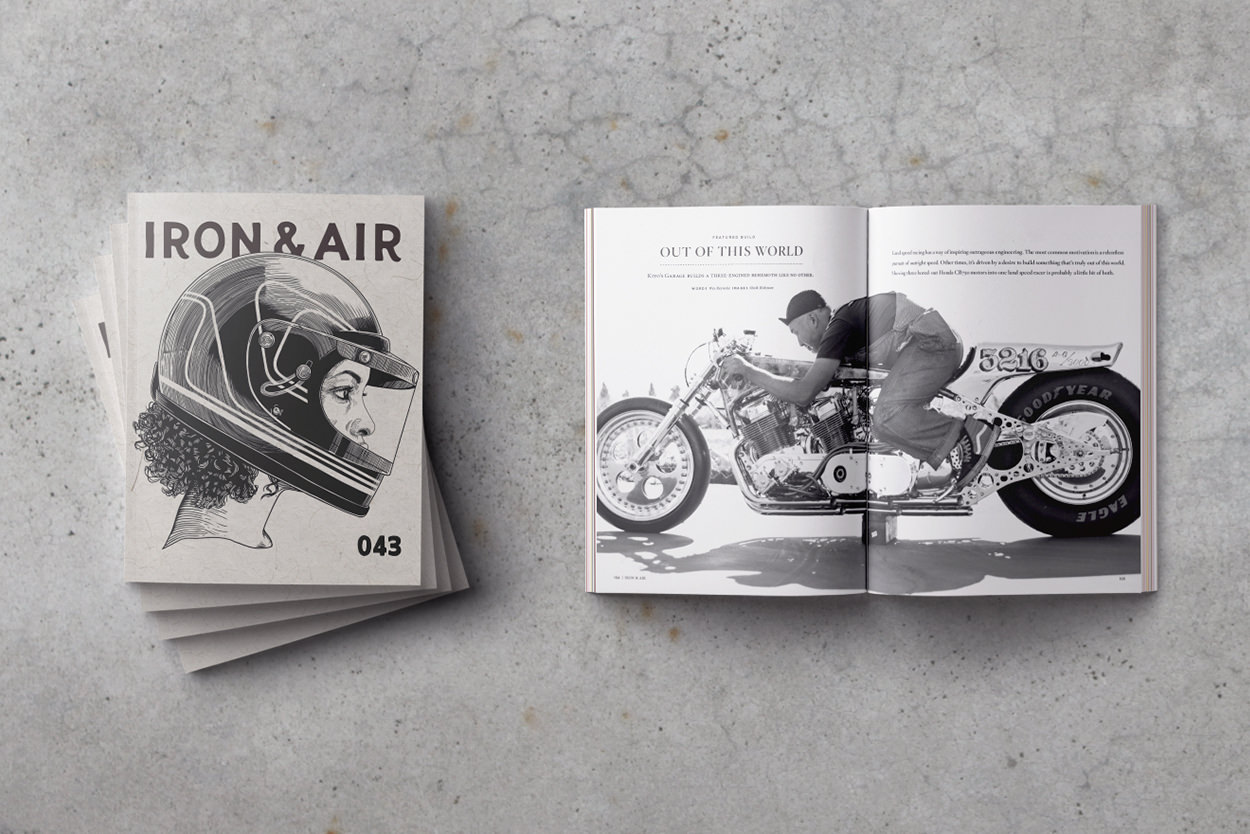 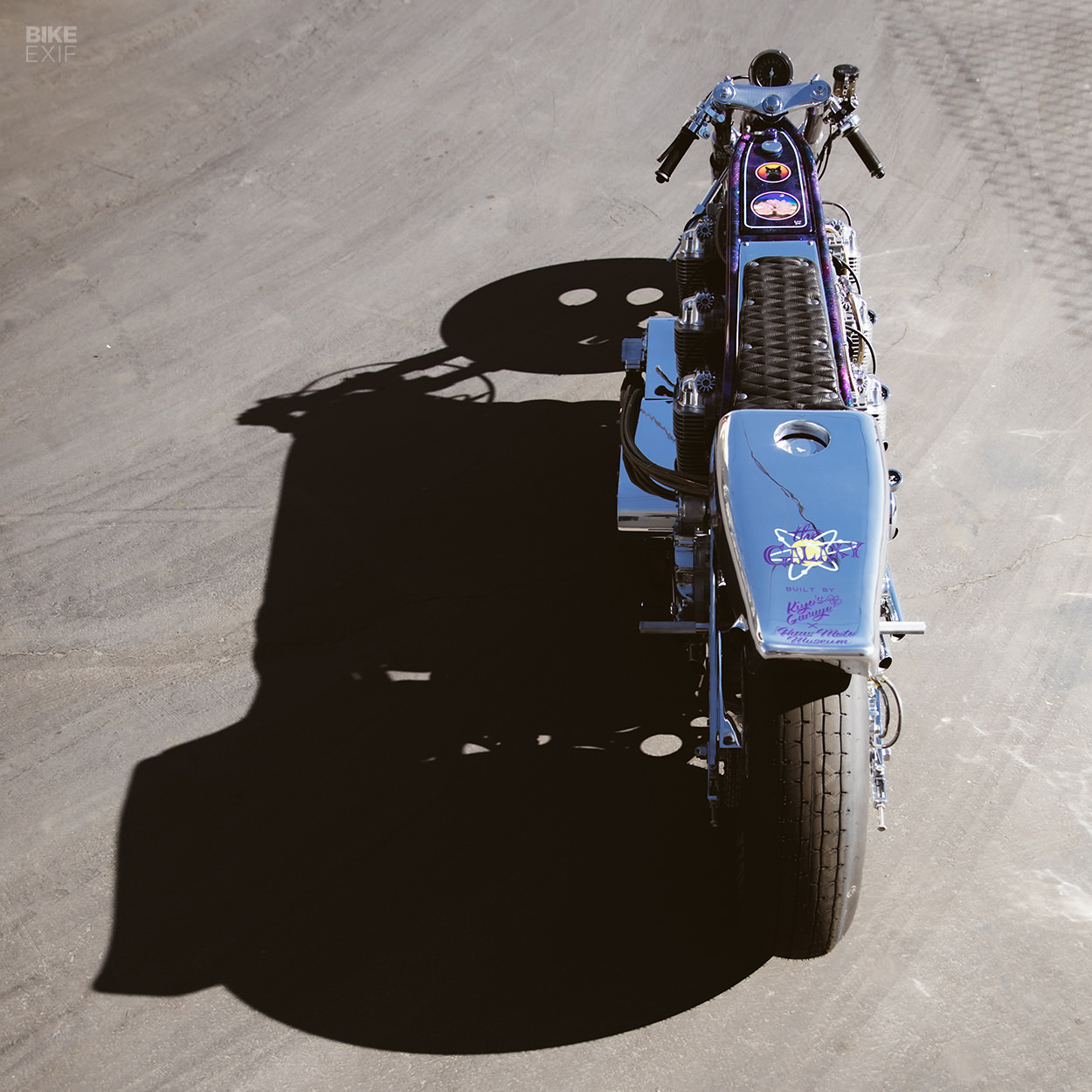