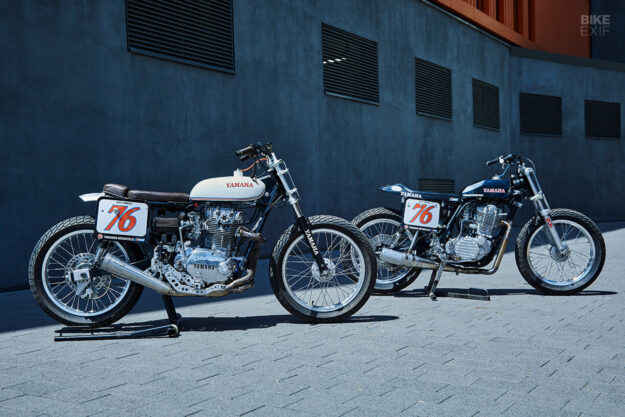 Alex Winkler wears many hats. By day he’s an industrial mechanic—but by night, he puts those skills to work in his home garage, restoring and rebuilding vintage bikes. When the weekend rolls around, Alex wheels his creations out of the garage and goes racing.

While we can all appreciate a no-expense-spared showroom build, there’s something special about home-made customs that are built to be ridden. Alex lives and breathes this philosophy. Both of the bikes you see here—a 1978 Yamaha SR500 and a 1980 Yamaha XS650—also happen to be his personal flat track racers. 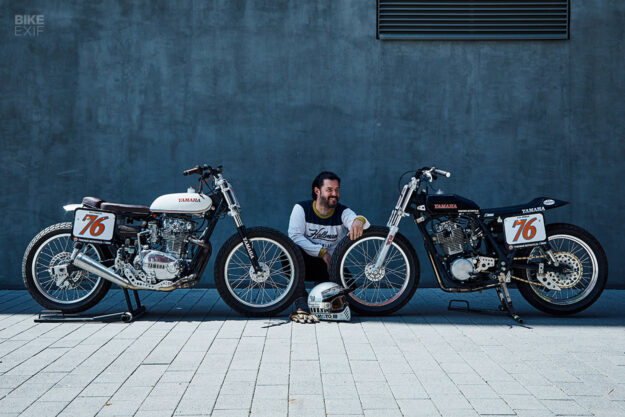 Based in Stuttgart, Germany, Alex has been building his own bikes for the last ten years as Twinshock Motorcycles. The SR500 was actually one of the first motorcycles he ever put a wrench to. He originally picked the bike up for around $900 on eBay, with a view to building a café racer out of it.

It was in rough shape and barely running, so Alex started by rebuilding the engine, bumping the displacement up to 620 cc in the process. 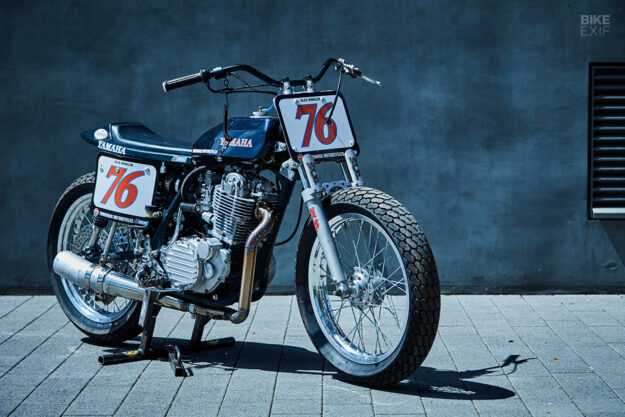 He tackled the cylinder head work himself as well, which included porting, polishing, and machining to accommodate larger valves. Megacycle performance cams were installed for good measure.

Alex also added a full hand-made exhaust system, from the manifold to the silencer. A fresh Mikuni TM40 flatslide pumper carb was added, and the stock airbox was swapped for a less restrictive pod filter, to keep things running smoothly. 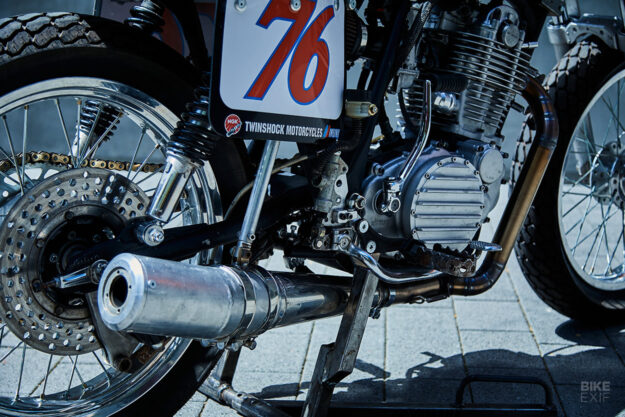 By the time the engine went back together, the little café racer was running like a champ and putting down a healthy 49 hp… but it didn’t stay a café for long. A few years later, Alex took an interest in flat track racing, and once again the little Yamaha went onto the chopping block.

The front end was upgraded with a set of Yamaha XT550 yokes, while adjustable Koni 7610 shocks went on the rear. Alex kept the standard 19” SR500 front wheel, but laced a 3.00×19” KTM rim to the rear hub. That meant he could fit proper Mitas H18 flat track tires at both ends. 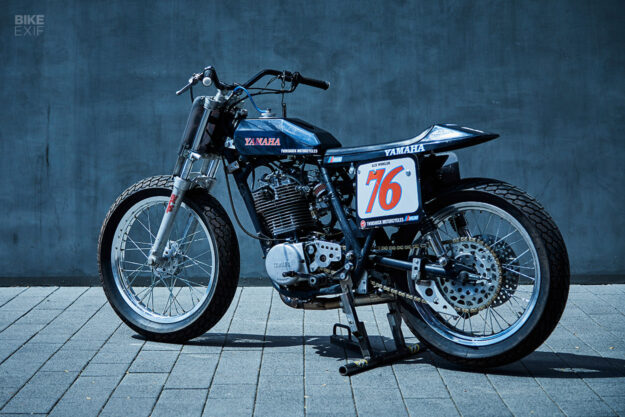 A fiberglass fuel tank and flat track tail piece sit up top. Alex finished the build off with custom sprocket and brake guards, machined rear sets, and a home-made fork stabilizer to shore up the handling for race use.

As Alex continued to build and tinker over the years, his collection of spare parts took on a life on their own. At some point he realized he had everything he needed to build a second Yamaha track bike—so naturally he did just that. 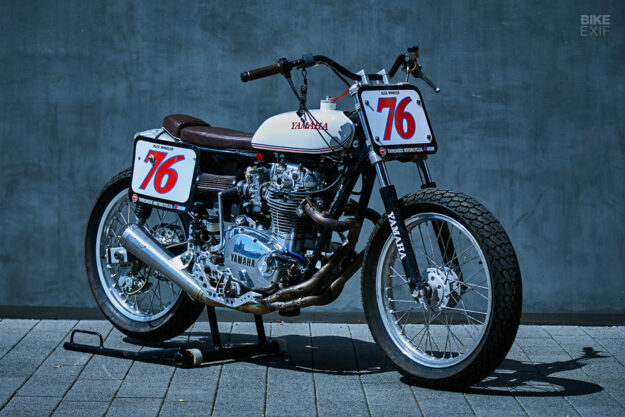 Legally the white motorcycle you see above is a Yamaha XS650, but it’s about as much XS as your typical pound puppy is a Labrador Retriever. We’ve got no complaints with this mutt’s pedigree though, because Alex worked some serious magic with that parts bin of his.

Technically, you’re still looking at an XS650 engine sitting in an XS650 frame. Alex bored the cylinders out to 840 cc, and installed a pair of Wahl Spezialkolben pistons (that’s German for ‘special piston’), with a set of Nissan Bluebird (yes, the car) cylinder pins. There’s a performance ignition from Boyer Brandsden too. 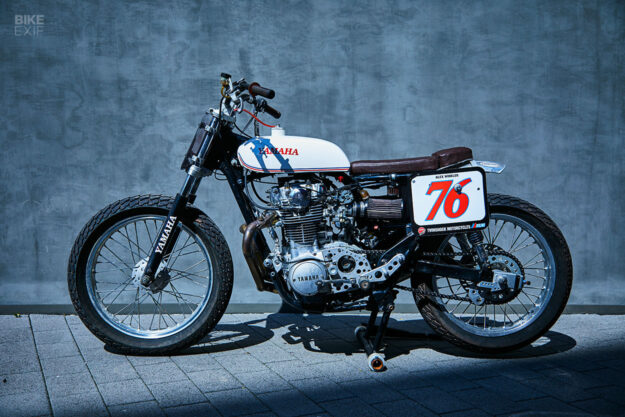 The carbs are Mikuni TM36 flatslides, the filters are from K&N, and the exhaust system is completely custom. According to Alex, the engine now makes a solid 68 horses—which ain’t too shabby, considering the bike has been stripped down to just 340 pounds.

The stock front wheel was replaced with a spare 19” SR500 hoop that Alex had handy, which now sits between a set of first-gen Yamaha FZR1000 forks that also happened to be laying around. The entire rear end was put together from spare parts too, and includes a swingarm from a Yamaha SRX600, a rear wheel from a Suzuki RMZ, and another set of Koni 7610 shocks. 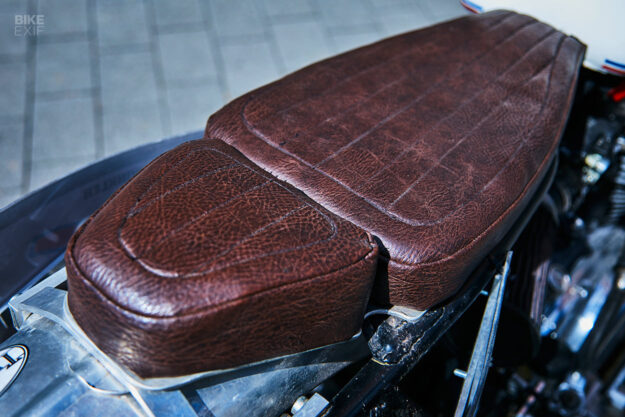 The bodywork includes a custom-painted gas tank pulled from a Suzuki GT50, and a stubby rear fender. The XS also sports the first seat that Alex has stitched together himself. It’s a handsome two-piece leather affair, and is perched atop a custom subframe.

Alex had a nice Brembo brake setup from a KTM 690 Duke stashed away, so he machined a custom bracket and put it to work on the rear. It was the same story (albeit a much more difficult install) for the Yamaha’s new hydraulic clutch system, which was pulled from an unidentified Ducati at some point over the last decade. 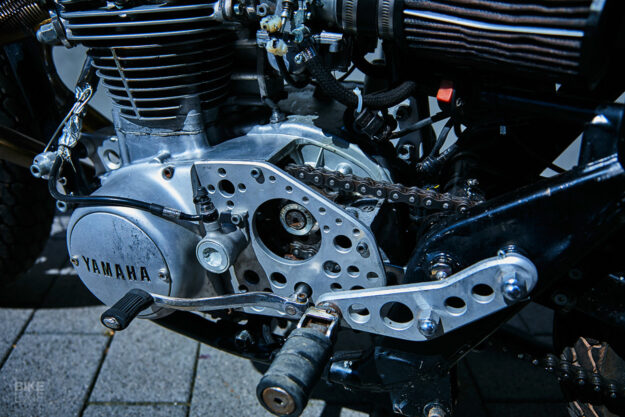 There’s no shortage of hand-machined parts scattered through this build. All of them carry the same unmistakably utilitarian design that Twinshock Motorcycles’ builds share—like a plethora of ‘speed holes’ to add lightness.

Remarkably, there’s not an inch of CNC-machining on either of these bikes. Alex refuses to use digitally-aided methods, preferring to fabricate everything by hand to keep his builds as “old school” as possible. 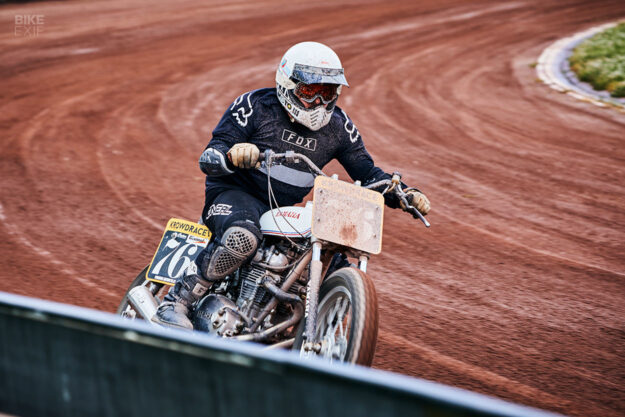 These two vintage Yamahas make a handsome pair, but we’d wager that they look even better in motion. The fact that they get raced damn near every weekend, and still clean up this well, gets major props from us.

Twinshock Motorcycles Instagram | Images by (and with thanks to) Kati Dalek 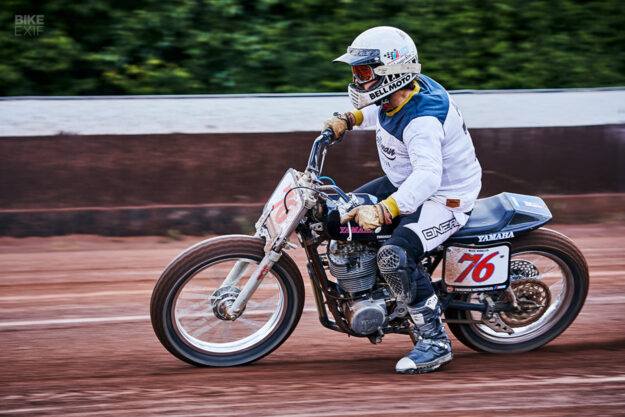