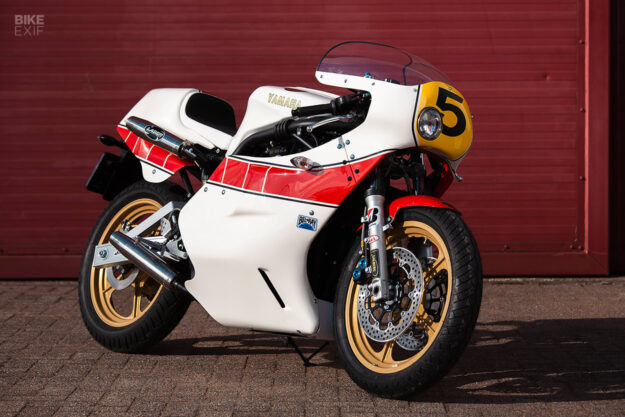 Maarten Poodt is a creature of habit. Each winter he drags another Yamaha into his workshop, rebuilds it to his taste, and sells it to fund the next one. But he’s changed things up since last year, and now takes on commissioned work too.

Judging by the stellar job Maarten has done on this Yamaha FZS600 Fazer, working to a client brief hasn’t cramped his style one bit. That’s because he’s stuck to the same formula that he uses for his personal projects: retro-inspired sportbikes with an OEM feel. 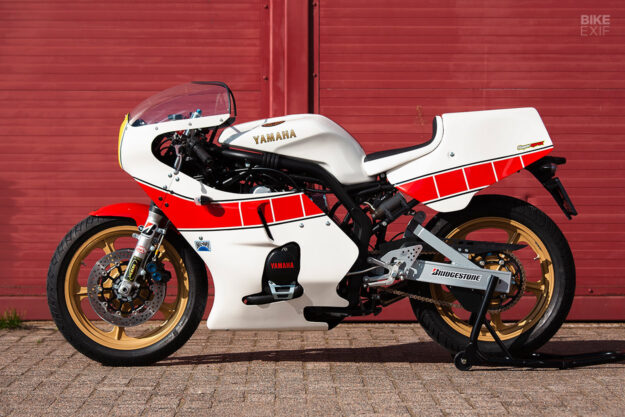 The ‘factory’ effect that Maarten aims for isn’t just about the fit and finish. He tends to put his own spin on classic Yamaha designs, and he often keeps his bikes street legal, with the sort of chunky turn signals and plate brackets you’d get on a stock bike. So it’s easy to mistake a Poodt special for a restoration of a classic Yamaha—albeit one that you can’t quite identify.

The donor bike for this project, a 2000 Fazer 600, was supplied by Maarten’s client. The brief was straightforward; it was simply a photo of the iconic Yamaha TZ500. 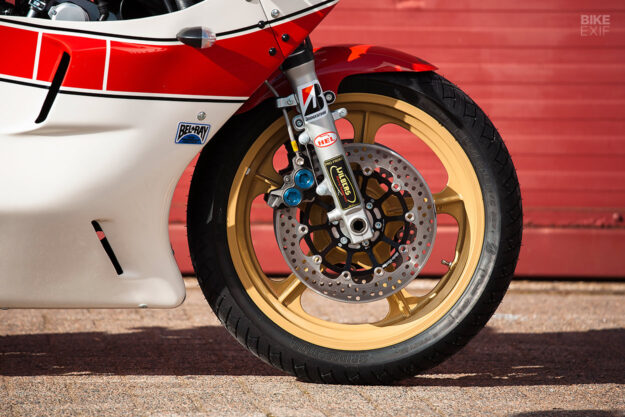 Making a modern four-stroke road bike look like a vintage two-stroke race bike is a tall order. But that’s just the sort of challenge the Maarten relishes, so he took it very seriously. “This is not a replica,” he explains, “but a very user-friendly Yamaha with classic racer looks.”

To nail the aesthetic, Maarten started with the wheels. He ditched the Fazer’s three-spoke units, and sourced a set of classic 18” PVM hoops instead. They had to be massaged on the lathe a little, so that they could accommodate common bearing sizes. 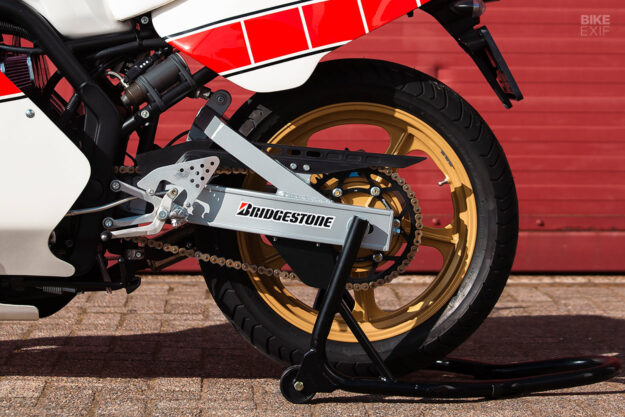 There’s another nod to the TZ500 out back. Maarten removed the Fazer’s stock rear suspension linkage, and built a brace for the swingarm that closely resembles the TZ’s. A new adjustable shock from WP Suspension is wedged in.

Up front are the forks, brakes and clip-ons from a newer Yamaha R6. The setup has been enhanced further with adjustable Wilbers fork internals, braided stainless steel brake hoses and upgraded brake discs. 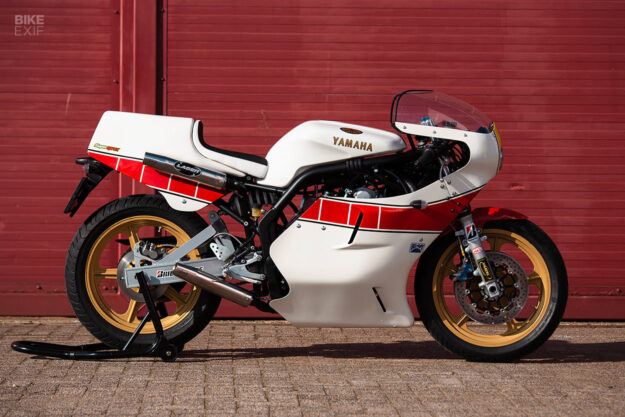 New bodywork was a must—and Maarten absolutely nailed it. For the fairing and tail section, he started with bits of original TZ bodywork, which had to be heavily modified to suit the FZS600. Maarten added a few custom sections too, and built new brackets to hold everything.

He also rebuilt the bike’s subframe to accommodate the new solo seat and tail bump. An inordinate amount of work went into parts that will likely never been seen. Lurking under the tail section are a new battery box, inner fender, crankcase breather reservoir, and all of the electronics, neatly repackaged. 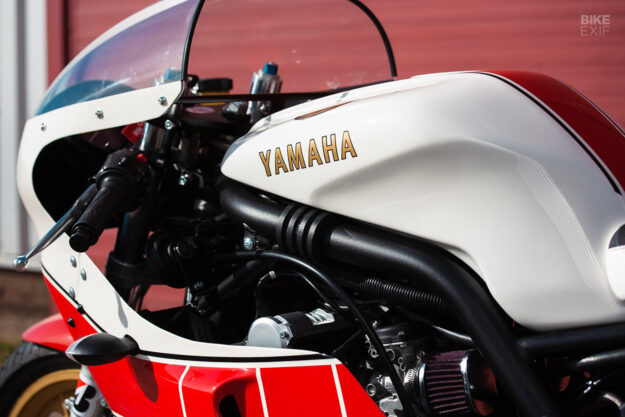 The Fazer’s original fuel tank is still in play, but it’s also gone under the knife. Maarten carved out space for the remounted rear shock, and relocated the fuel tap. Further down, the airbox was swapped for a row of K&N filters.

The engine was in good enough nick that it just needed a good refresh to get it back on the road. Maarten serviced it, adjusted the valves and tuned the carbs, and it was purring like a kitten. 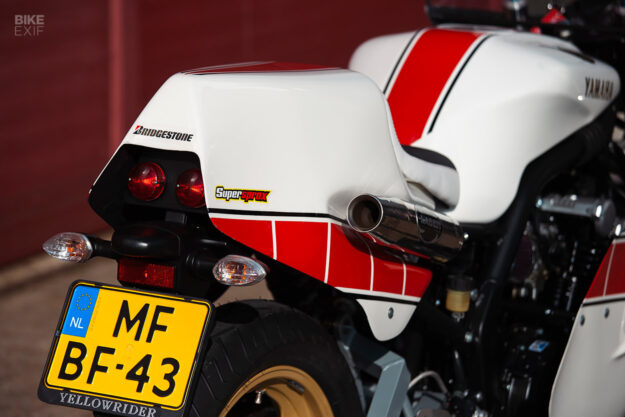 Getting the exhaust right was high on Maarten’s list of priorities. So he fabricated stainless steel four-into-two headers, spitting a pair of Laser mufflers out where you’d more or less find them on an old TZ.

An indentation on the right side of the tail emulates the same design on the TZ. On the opposite side, Maarten cut a piece out of the fairing to make space for the header and ignition cover. No stone was left unturned. 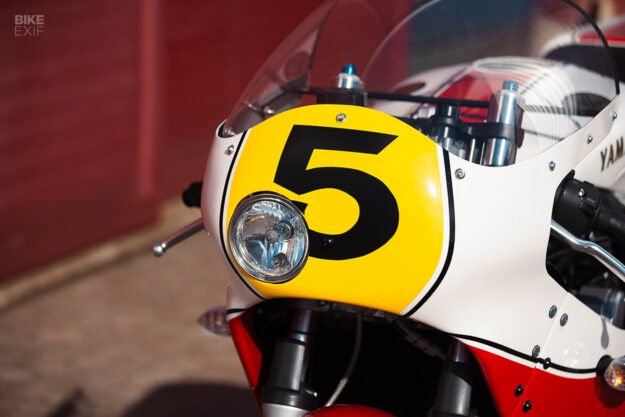 Elsewhere, you’ll find a new speedo and tacho, and factory-style switches and grips. A single offset headlight pokes out the front, with twin taillights embedded at the back. A generous tail bracket holds the license plate, bigger turn signals than you’d typically see on a custom bike, and even a reflector.

Maarten replaced all the bike’s perishables too, and fitted new Bridgestone rubber. It might be a twenty-year-old bike styled like a forty-year-old-bike, but it’s factory fresh. 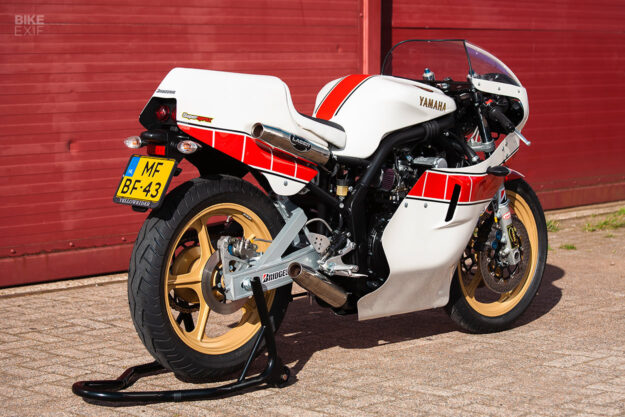 Picking a livery was a no-brainer. The Fazer’s new paint job is a riff on the TZ500’s, complete with gold Yamaha logos and wheels. If Maarten’s well judged mods are the alleyoop, then those tasty red ‘speed blocks’ are the slam dunk.

Winter is fast approaching in the Netherlands, where Maarten is based, and he already has the next bike booked in. It’s a 90s Yamaha TDM, and it’s for the same client. 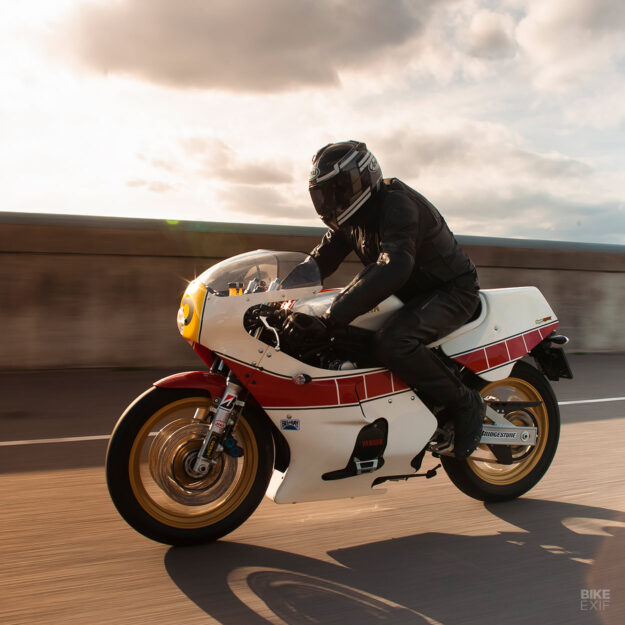