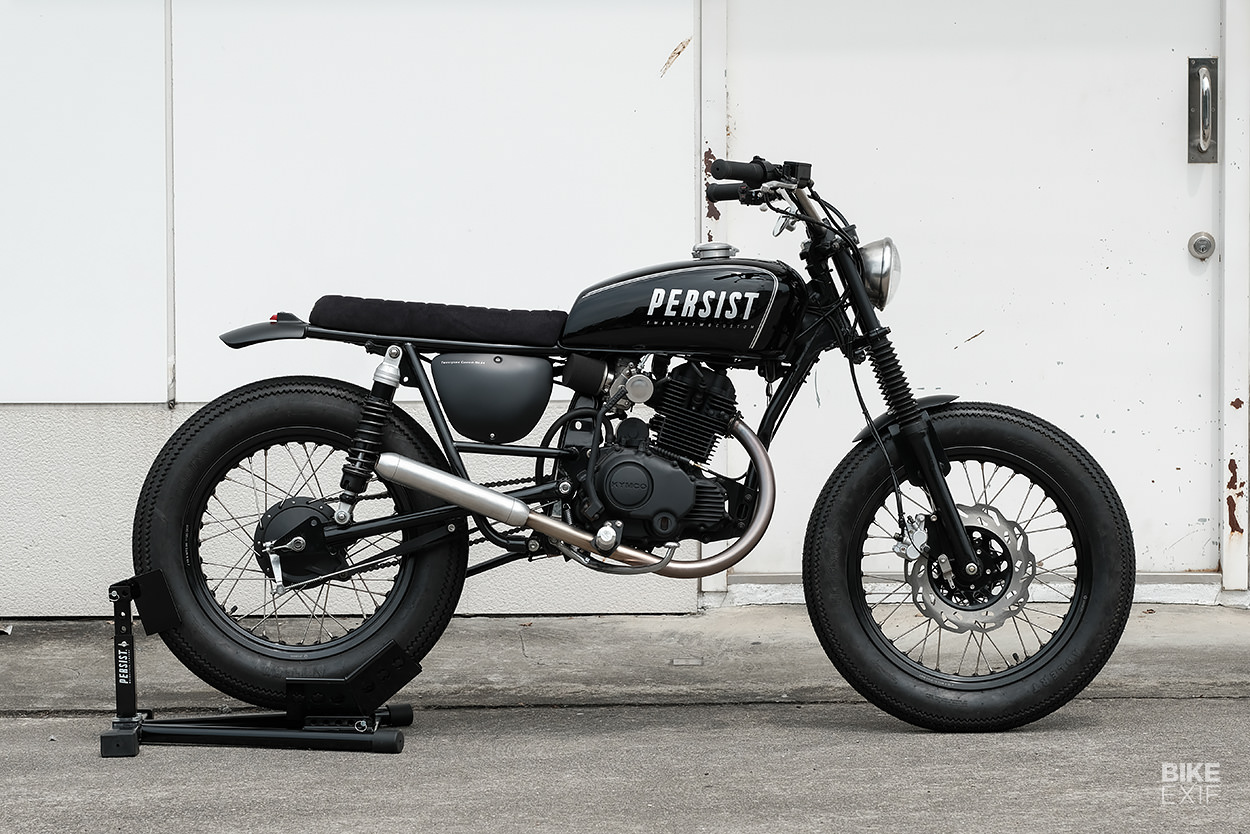 Kymco isn’t a big name in the West, outside of scooter circles. But it’s a different story in their home country of Taiwan, where this custom Kymco KTR 150 hails from. The KTR is one of Kymco’s more popular models there—and as you can tell, it lends itself fairly well to customization.

Taiwan’s custom scene is rapidly expanding, and the shop behind this KTR 150, Twentytwo Custom, is dedicated to the cause. They’re the custom branch of Persist Motorcycle Company—a Taiwanese motorcycle culture and apparel brand. Collaborating with Tough Tracker from Taichung, they set about creating this cute street tracker, which they’ve named ‘Urban Drifter.’ 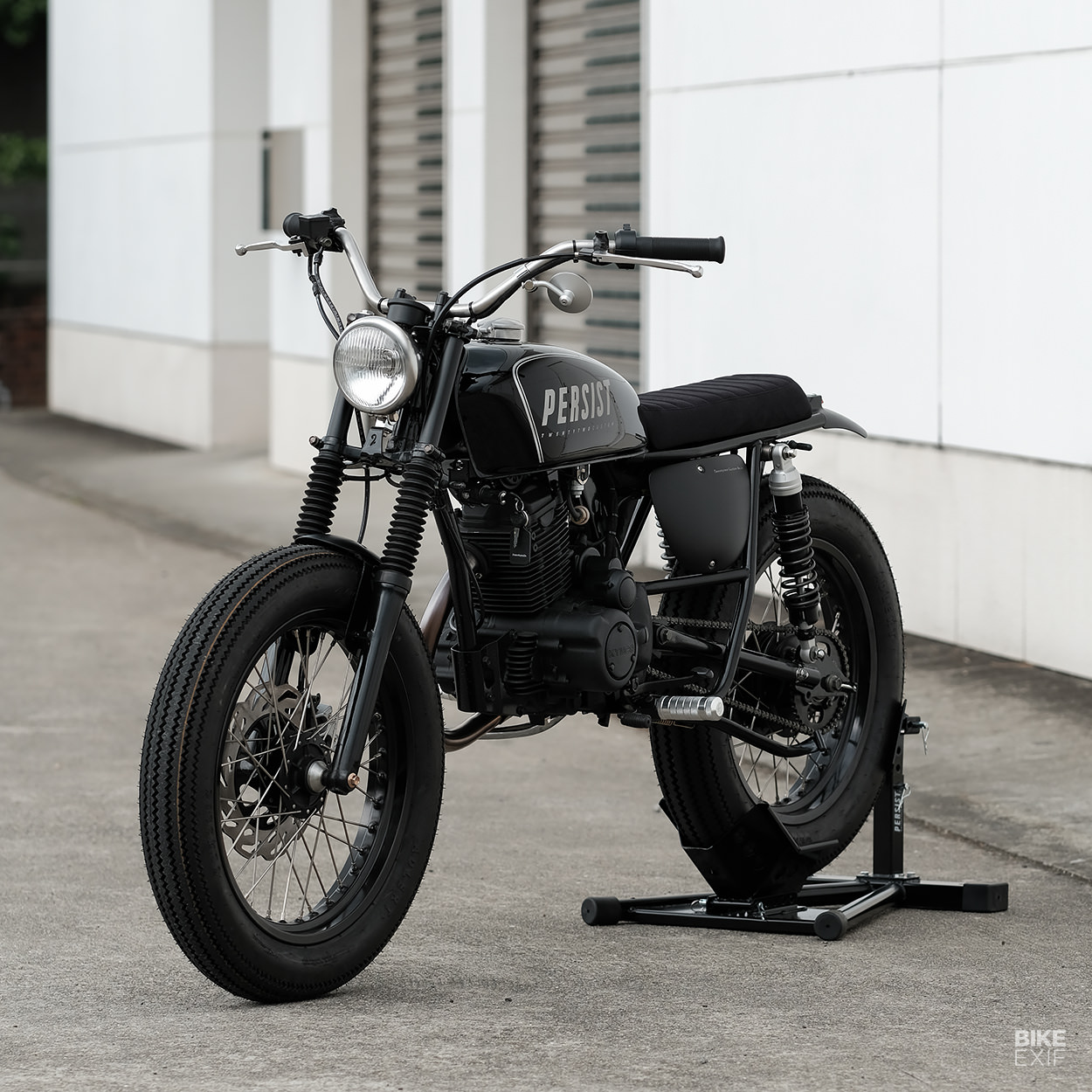 The client gave Twentytwo mostly free rein over the bike’s design. “He had only two requests,” says Twentytwo’s lead designer, Dong Lin. “A bike suitable for his height; 1.82 m [6’1″], which is above average here in Taiwan, and black as the overall color.”

“The rest was up to us to get creative. We decided to build a bike that represents a modern, urban lifestyle. We kept the original mainframe and front suspension but all the other parts on the bike were redesigned and replaced.” 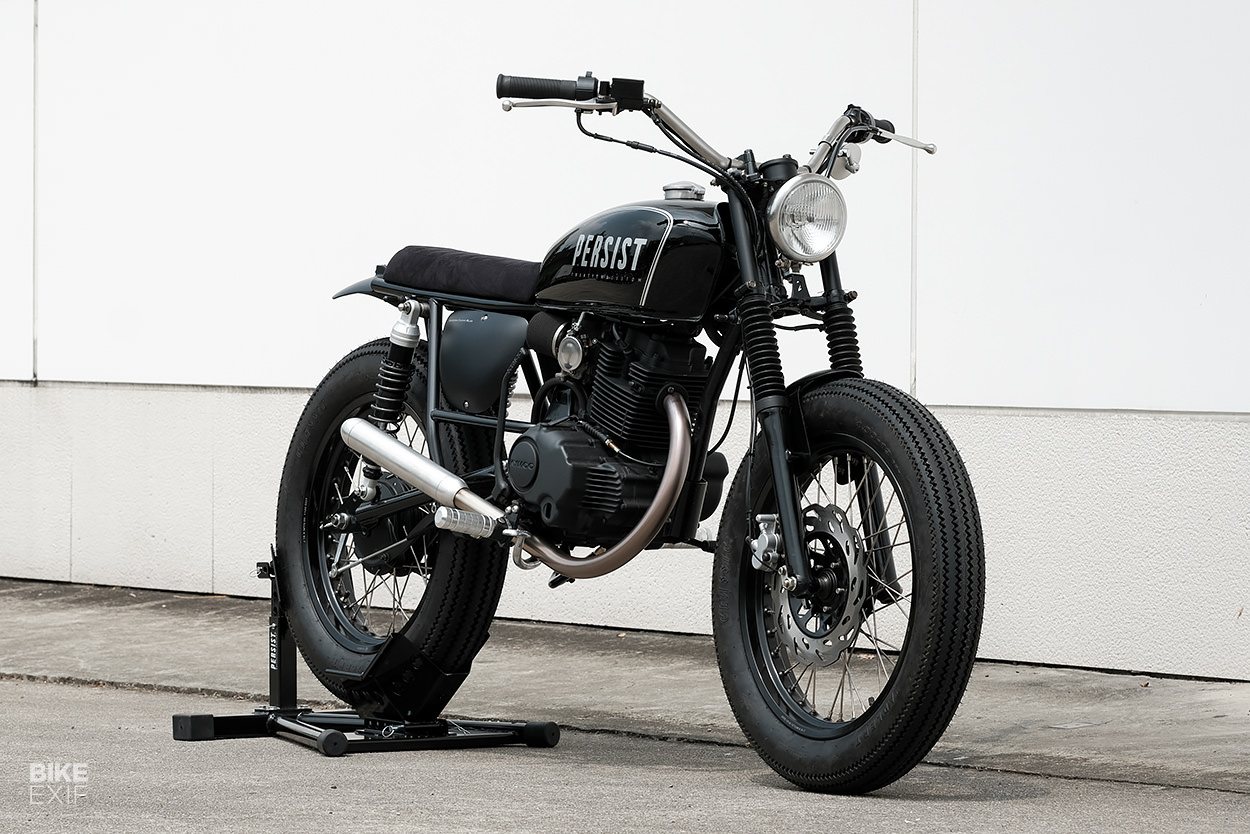 Given the KTR’s popularity, finding a donor was easy. Since the plan was to customize it, they landed on a rather tired-looking carbureted model from 2007. Dong mockup up the design and laid down a battle plan, then handed the bike over to Tough Tracker to bring his vision to life.

Right up front is a Bates-style headlight, bolted to a neat bracket from another Taiwanese outfit, 2LOUD Custom, which also holds the new front indicators. Behind the lighting setup is a Daytona digital speedometer and a handlebar of Twentytwo’s own design. And the top section of the fork tubes have been blacked out to blend in with the new fork gaiters. 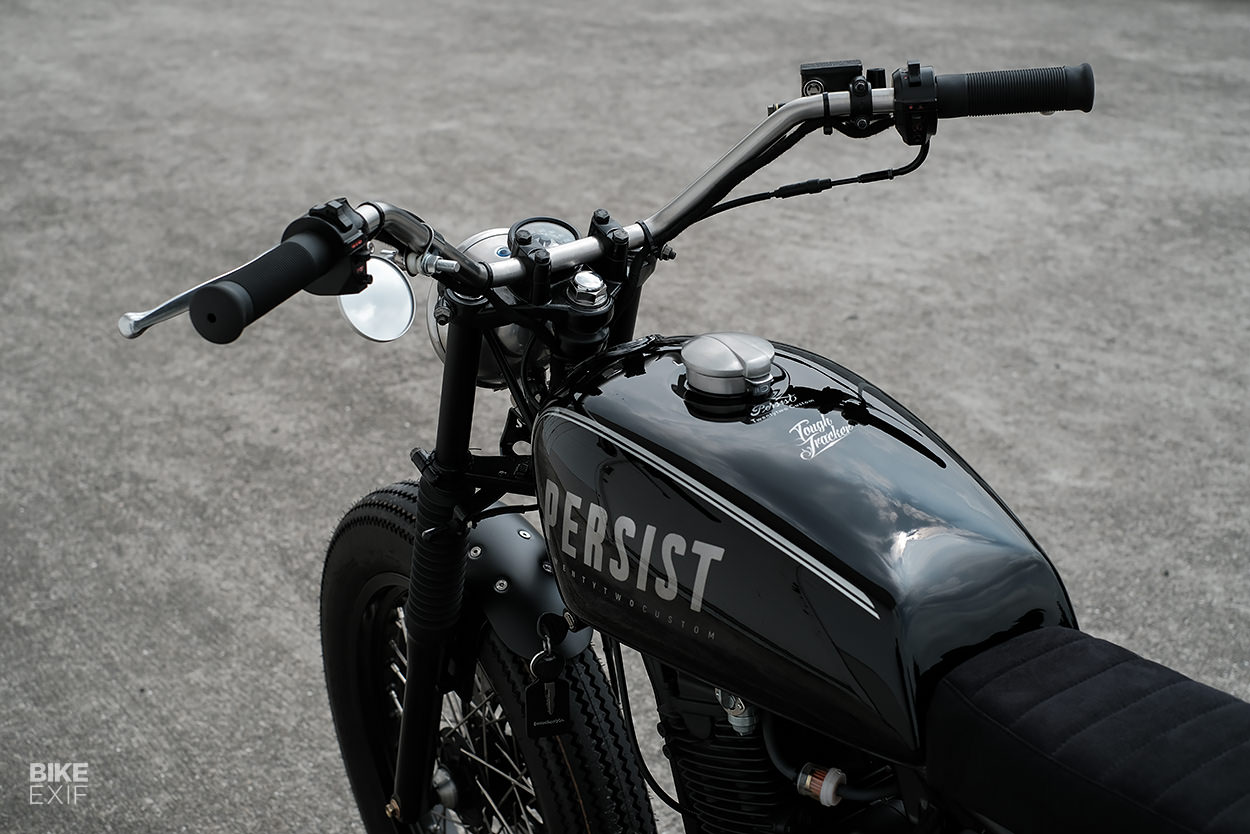 Up top is a Suzuki BS125 fuel tank, modified to fit the Kymco. It suits the bike perfectly, plus it carries more fuel than the original tank—and nobody ever complains about extra fuel range.

As Dong alluded to before, the whole back end of the KTR 150 was chopped off and discarded. The new subframe kit came from another Taiwanese motorcycle shop, Kick Garage. But Dong and the team had to put some effort in to make it blend with the rest of the bike. 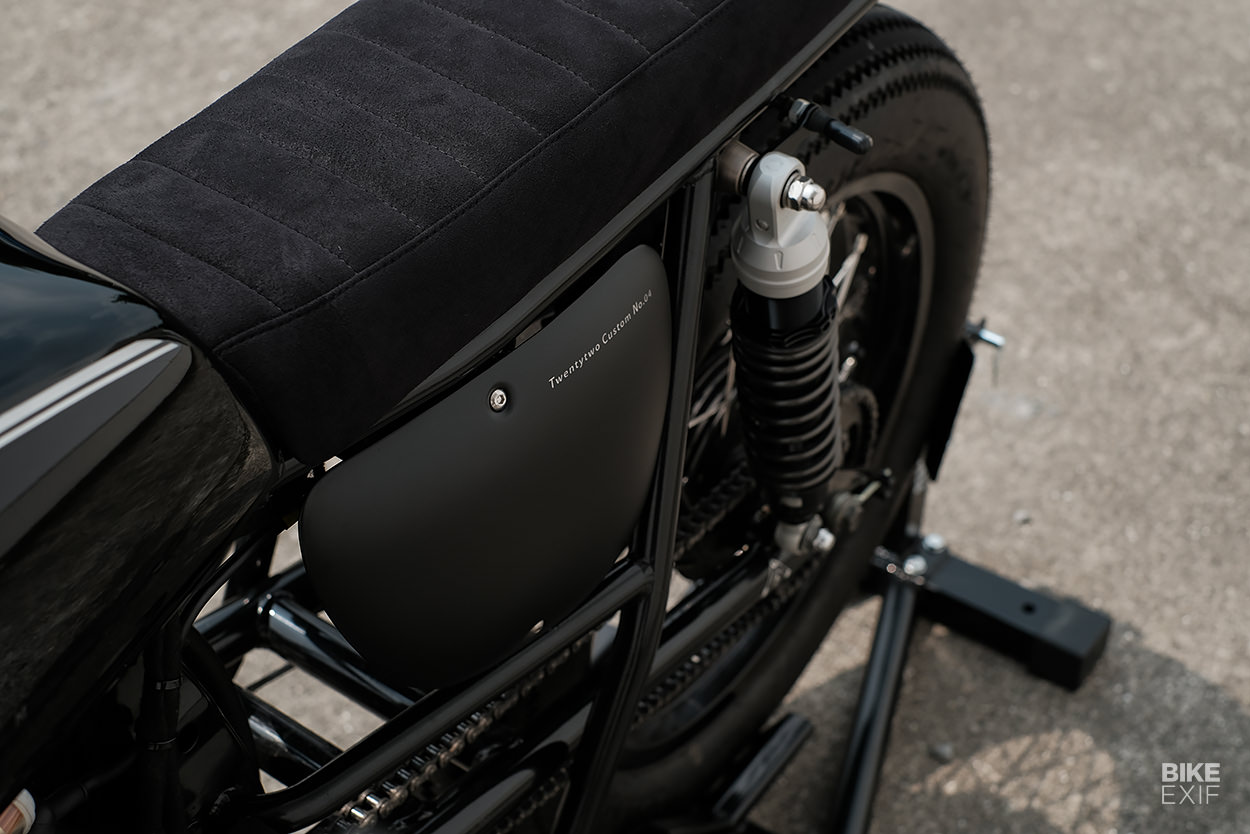 “For us, the challenge was to maintain the visually compact feel, and try not to make the bike look empty with the bigger frame,” he says. “So we welded two extra bars to the subframe.”

The new bars are just below the two side covers and cleverly fill out the negative space beneath the seat. Those side covers were made by hand out of aluminum sheet, as was the rear fender with its integrated tail light. 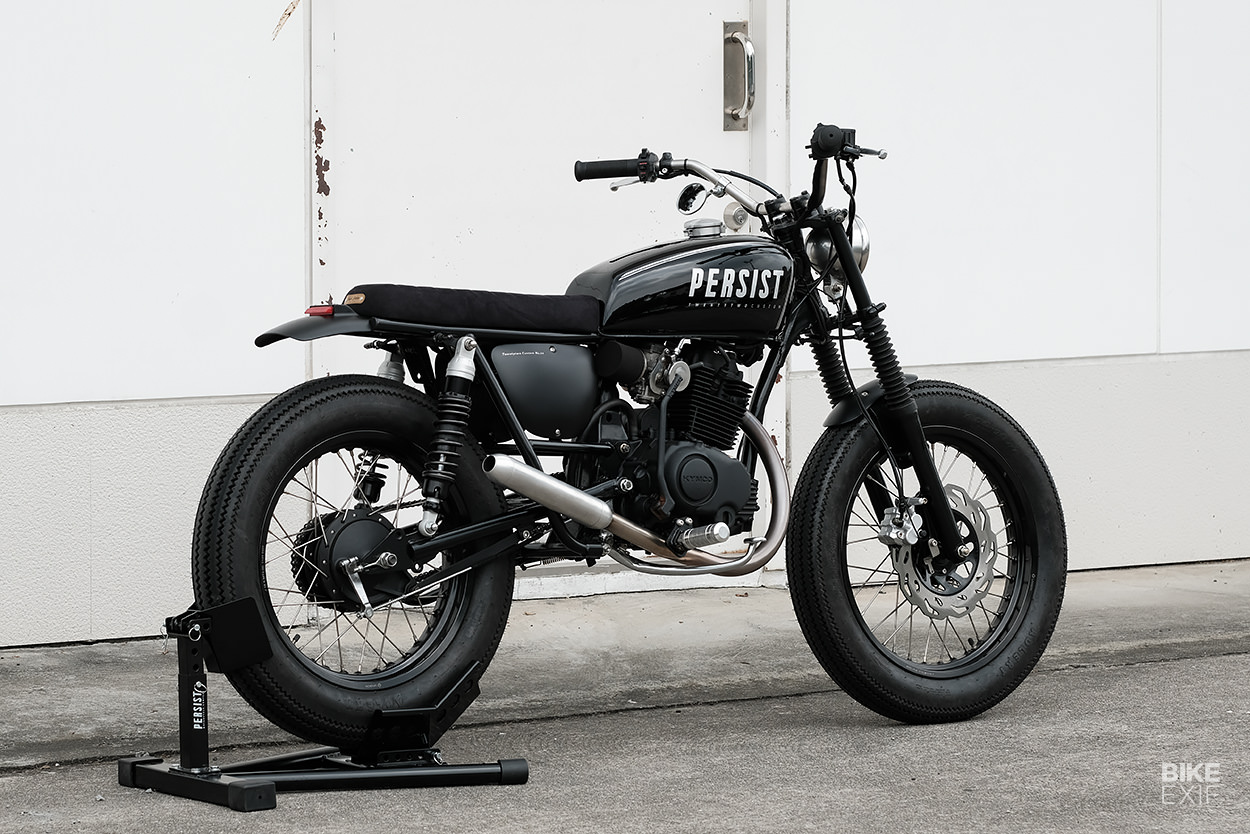 Replacing the cast wheels on the original bike is a set of spoked items, measuring 19” at the front and 18” at the rear; really leaning into the street tracker vibe. Wrapped in Firestone-esque rubber, they look very slick (pun intended), especially against the new black rims.

There isn’t much on this Kymco that wasn’t made by hand, and the seat is no different. Built on an aluminum pan with a custom-made suede cover, it’s a lot taller than on most builds of this style, with almost desert sled-like proportions. It not only ties into the design of the bike well, but it would surely also be more comfortable for the long-legged owner. 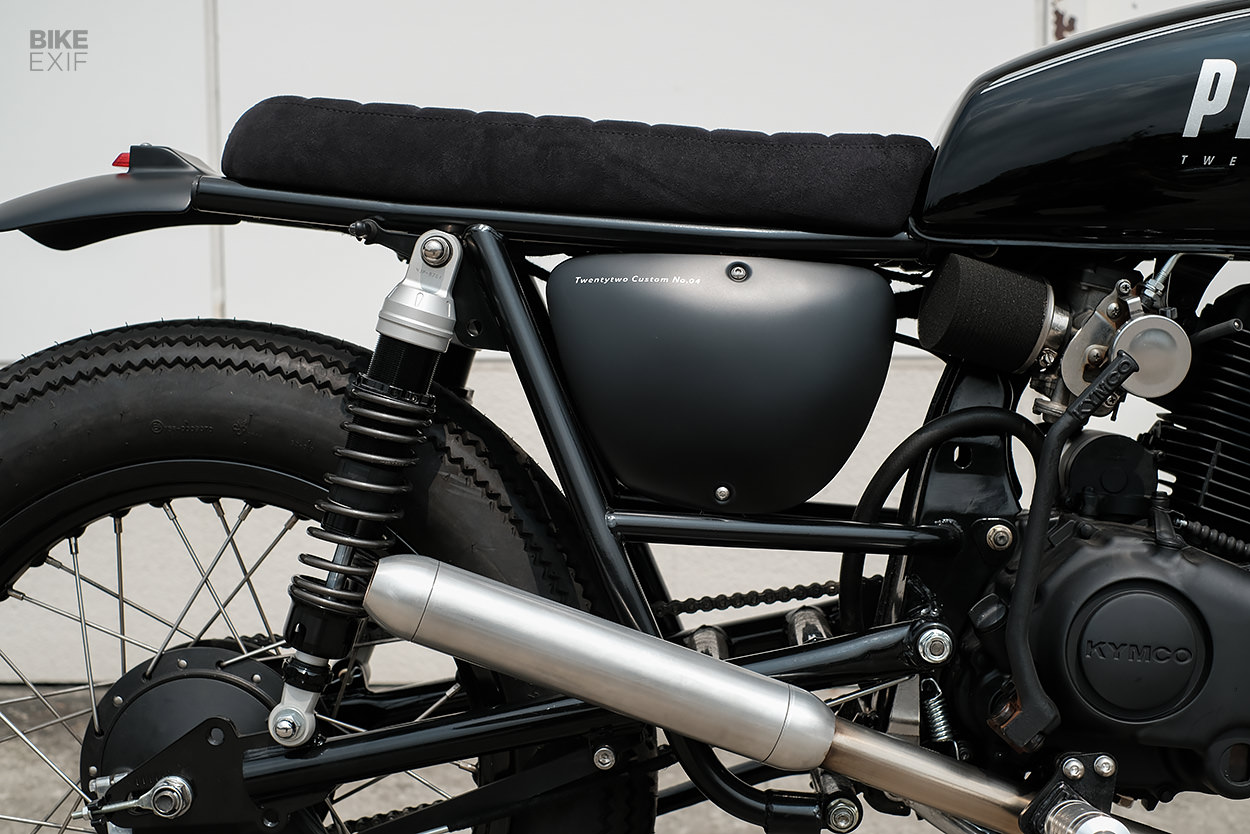 The rather curvaceous exhaust is also handmade, and, along with the foam filter on the carburetor, should extract a few extra horses from the 150 cc single. New shock absorbers from the Taiwanese brand MJP do duty out back.

The Marques Brownlee-approved ‘matte black everything’ theme is continued throughout the entire bike. The only exception is the gloss black fuel tank, adding just the right amount of shine to the build. 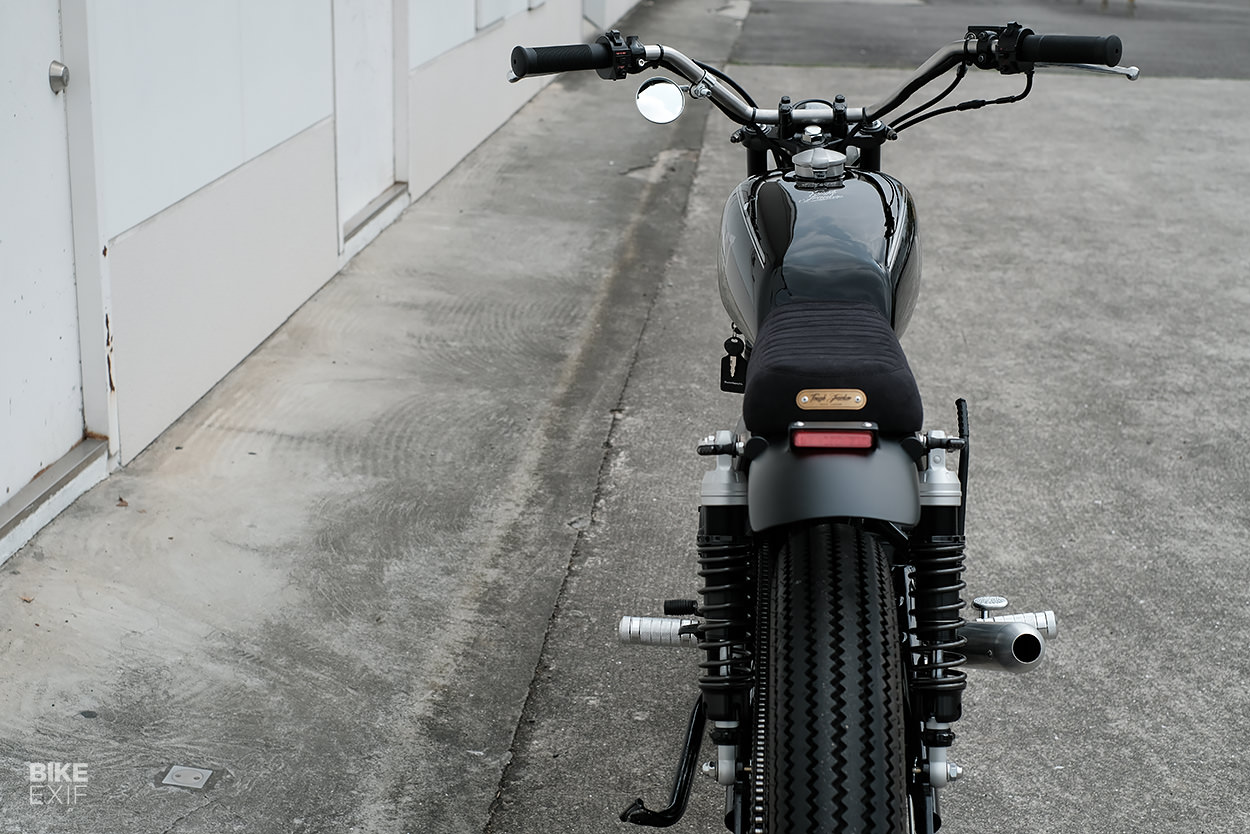 There is a shift in sentiment towards smaller, lighter motorcycles and that’s a good thing. After all, it’s more fun to ride a small bike fast than it is to ride a big bike slow. The Kymco’s perky 150 cc single is more than enough to propel the lucky owner around the streets of Taiwan, especially on a bike that looks this good.

Our only complaint is that the Kymco KTR 150 is not readily available outside of Taiwan. 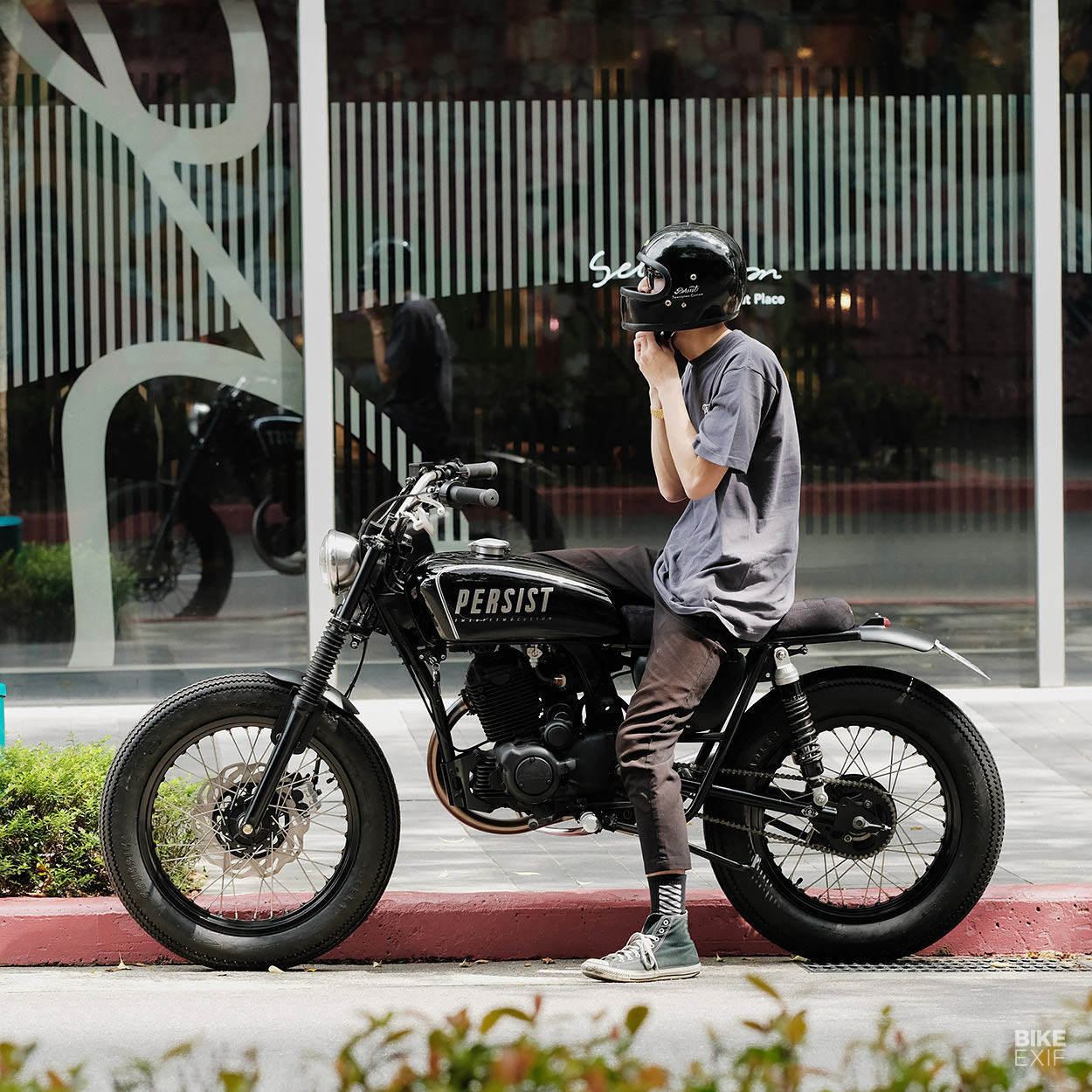