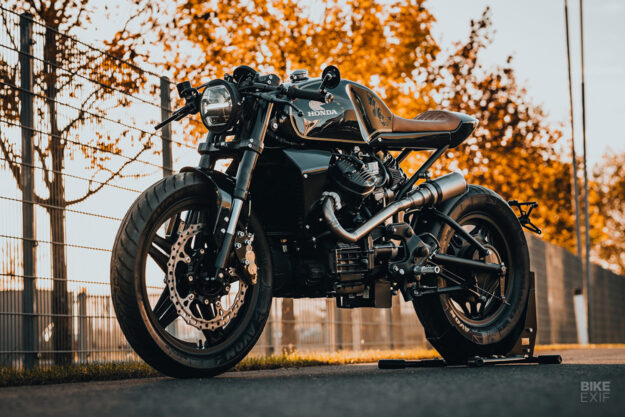 When Honda released the CX500 in 1978, they had no idea how significant it would become in the custom world roughly four decades later. Initially released to scores of adoring fans, it eventually fell out of favor—and its design hasn’t aged well. But the revival of the café racer scene has meant a resurgence in CX500 popularity, led by builders that have figured out how to navigate its awkward layout.

Austria’s NCT Motorcycles clearly know their way around the Honda CX500. They’ve just worked their magic on this 1982 model, turning it into a way sharper motorcycle than what originally left the factory floor. And they even managed to retain its original Comstar wheels in the process. 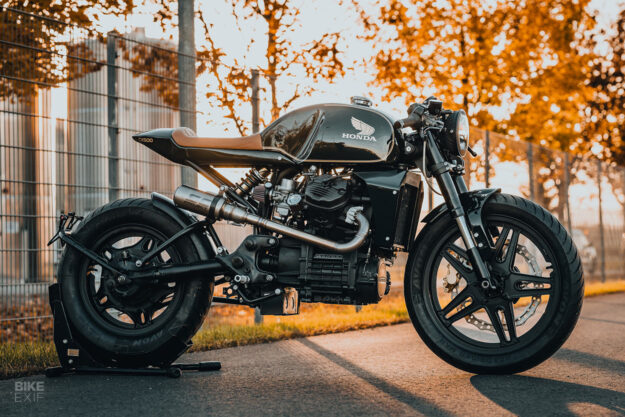 NCT founder, David Widmann, was approached by a customer from Dubai who wanted his own twist on the classic Honda twin. David was happy to oblige—so after a bit of back and forth with the customer, they eventually settled on a design and the project kicked off. The donor bike was pulled out of a barn on a vineyard in France, and gradually transformed over two years. 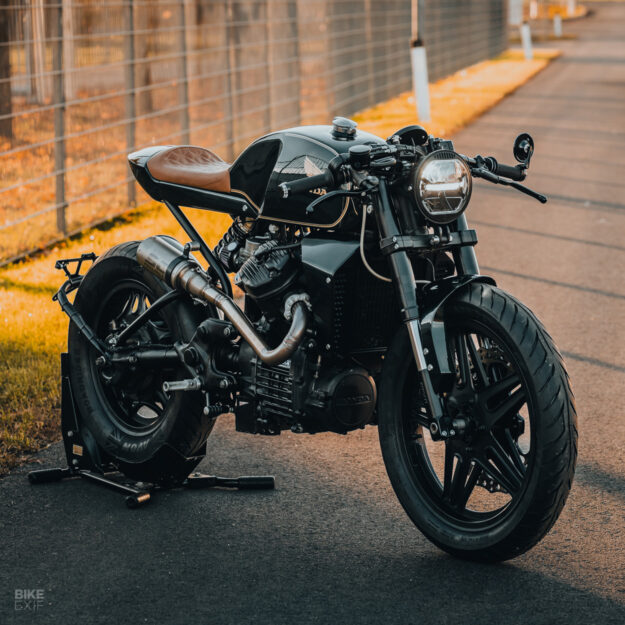 NCT started with one of the CX500’s major oversights: its spindly front forks. They were replaced with a set of Showa units, lifted from a Ducati. Powder-coated black to match the rest of the bike, the wheels wear Avon tires in the factory sizes; 100/90-19 at the front and 130/90-16 out back.

Up front is a Brembo caliper, mounted on a custom bracket and gripping a massive 360 mm disc. Even though it’s just a single disc, it’s a huge improvement over the original setup. 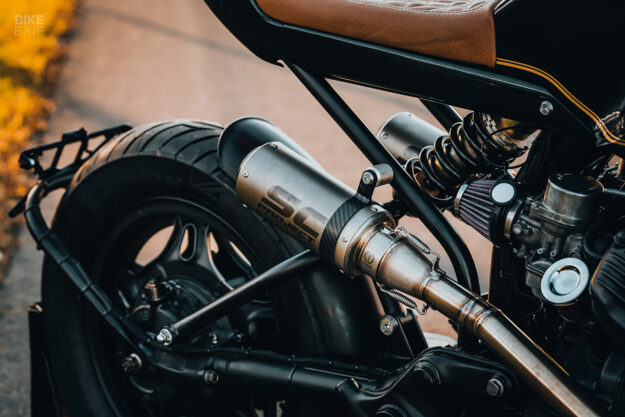 Another one of the CX500’s downfalls is the massive dip in its subframe. NCT made the wise decision to lop the whole thing off and start again, with a lithe custom unit. Not stopping there, they team also completed a mono-shock conversion by modifying the stock swingarm.

Next, all of the CX500’s bodywork was replaced with a full complement of hand-made parts, radically transforming the bike. The fuel tank was fabricated out of aluminum, with knee indents that ever-so-subtly recall the stock bike. 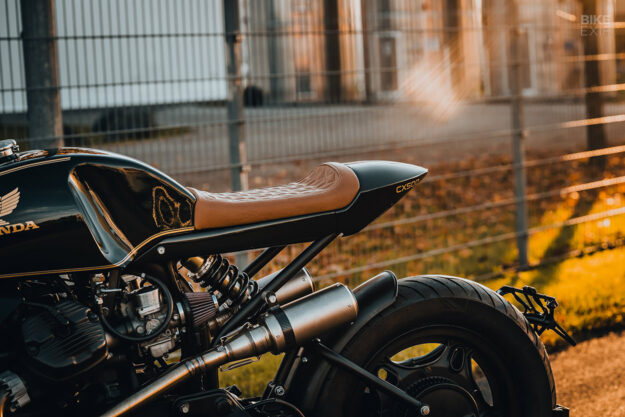 NCT took a different approach with the waspish tail section though, opting to 3D print it instead. It’s capped off with an exquisite diamond-stitched brown leather seat, and an LED taillight that sits vertically in the rear hump. The turn signals sit on a custom-made license plate bracket, mounted off the swingarm.

The way the tank tapers effortlessly into the rear section is nothing short of masterful. Finishing touches include custom-made fenders and a Monza-style gas cap. NCT also built a custom aluminum shroud for the radiator—it’s a touch often overlooked on the CX, but it makes a huge difference. 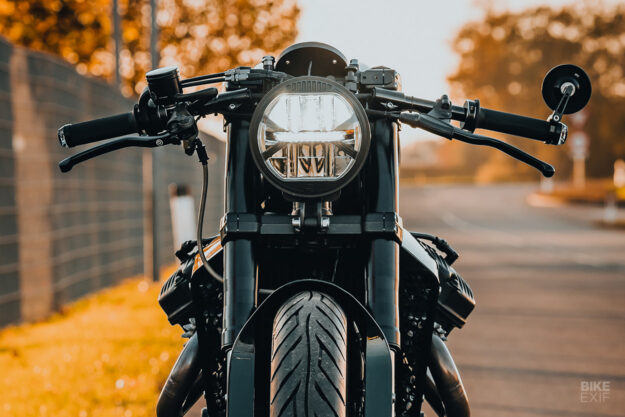 An LED headlight, clip-on handlebars and a full suite of Motogadget components keep the rider cockpit simple, yet functional. Also present are new Domino grips, and a Brembo brake master cylinder. The battery is mounted in a custom housing under the gearbox, while a Motogadget mo.unit handles the brain work.

The Honda’s engine also got the NCT treatment, with a full tear-down and rebuild, and a fresh coat of black paint. The Keihin carburettors are original, but with the airbox removed they now breathe through K&N pod filters. 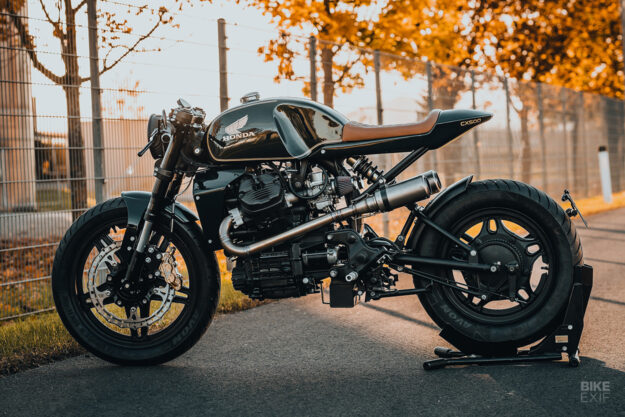 The crankshaft-mounted radiator fan was replaced with an electric thermofan, freeing up around five hp. Also assisting with power gains is a pair of hand-made stainless steel exhaust headers. With SC-Project mufflers on the ends, we bet this thing sings a lovely song at the 9,500 rpm redline.

From its flawless stance to its perfectly fluid lines, there’s a lot to love on this CX500 café racer. Taking it over the finish line is a coat of dark green paint, chosen from Aston Martin’s swatches, and earning it the nickname ‘Valkyrie’ after the British marque’s hypercar. Tasteful gold highlights add the perfect touch. 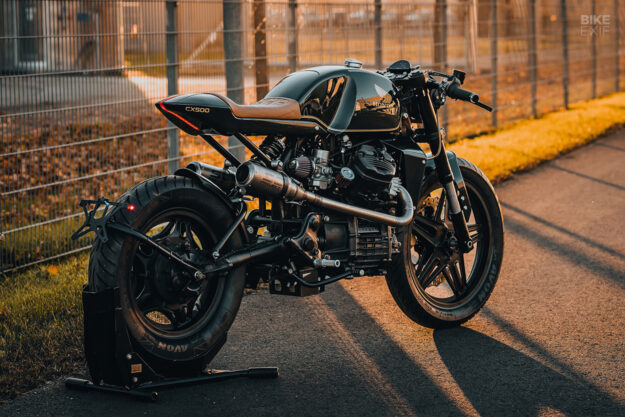 “We are very much looking forward to handing the project over to the owner, and seeing the bike on the streets of Dubai,” David tells us. We’re certain its new owner will absolutely love it—just like we’re certain it will inspire future generations of CX500 builders. 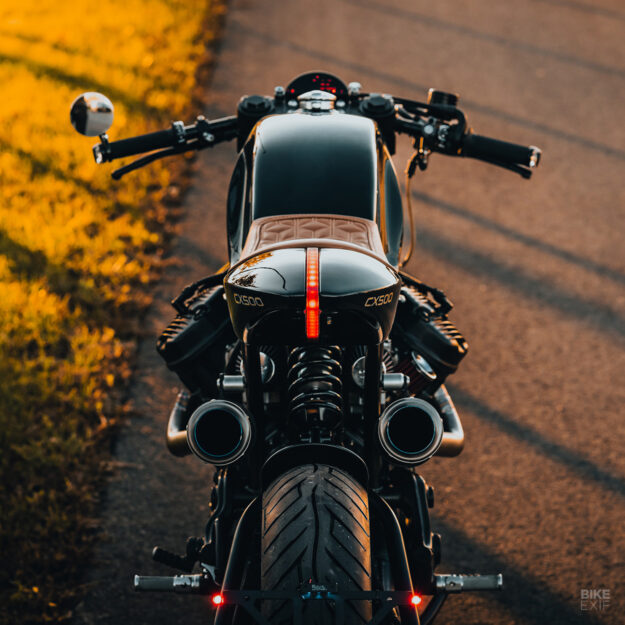