Werk of Art: A stripped-down BMW R100RS from 46works 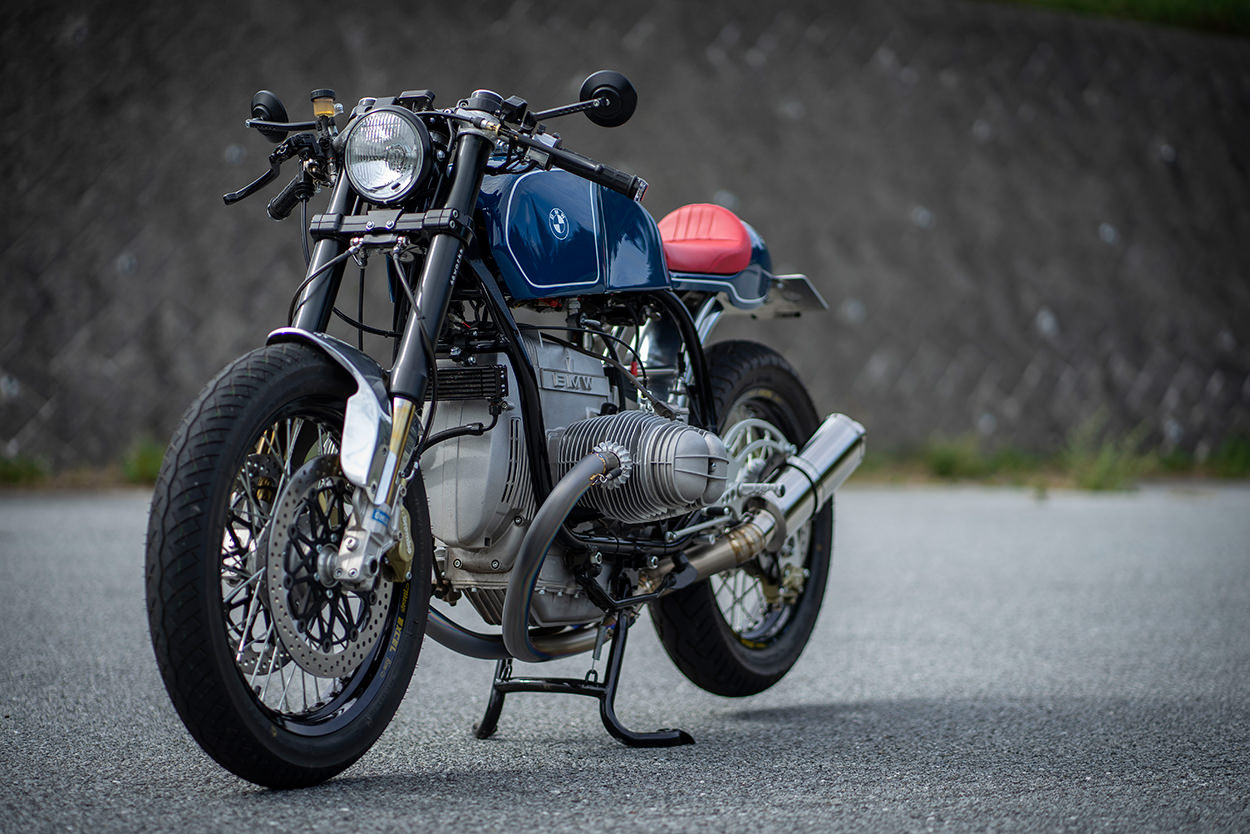 The phrase ‘renaissance man’ is thrown around too loosely these days, along with ‘legendary’ and ‘iconic.’ But there’s no other way to describe Shiro Nakajima.

The man behind the 46works label is a not just a motorcycle builder. He’s also a trained engineer, a talented woodworker, a furniture maker, and a vintage car restorer. He’s also the entrepreneur who founded the Japanese BMW workshop Ritmo Sereno, and when he gets time, he races classic motorcycles. 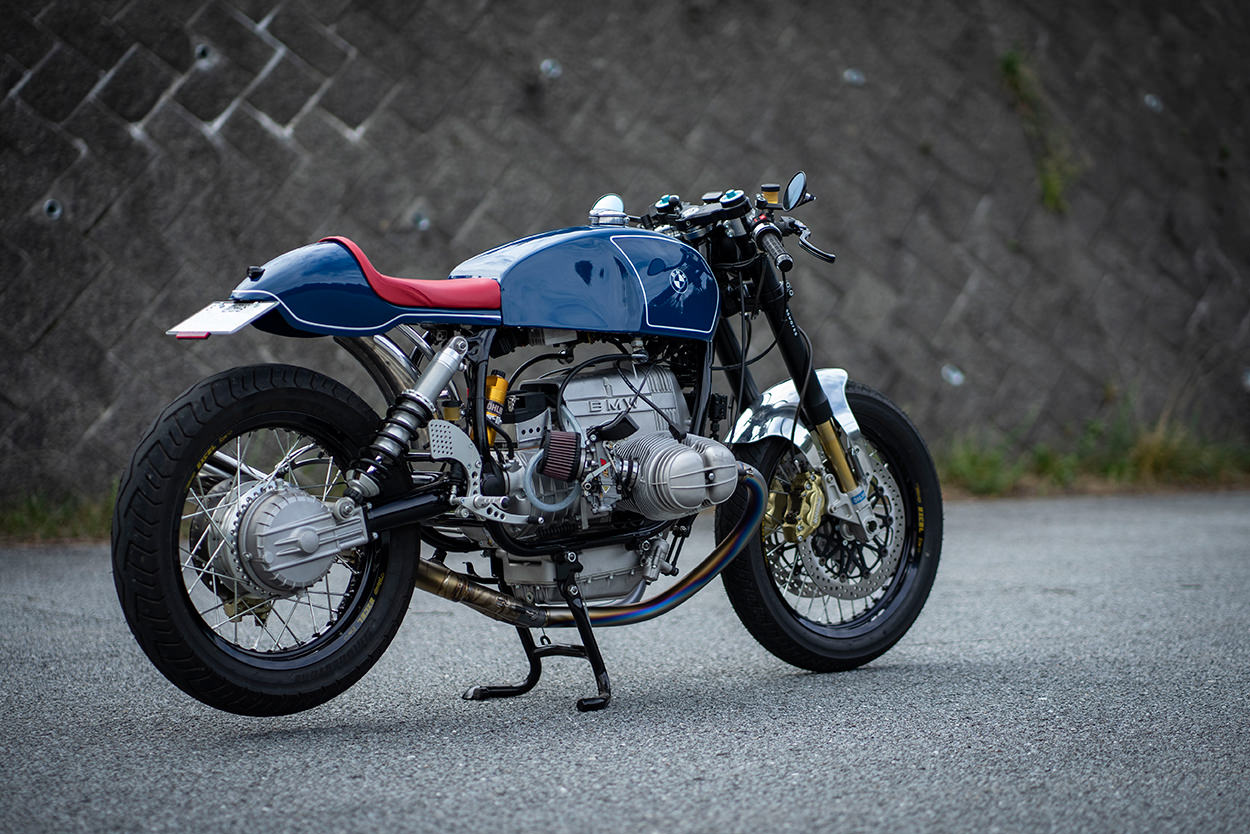 Nakajima-san’s beautiful workshop is housed in a traditional wooden building overlooked by the Yatsugatake Mountains on the island of Honshū, and this 1992 R100RS is the latest machine to roll out into the autumn sunlight.

This particular build is a commission. It’s a second-generation R100RS built near the end of the 18-year production run, which still stacks up well as a pretty rapid mile-muncher—even in stock spec. 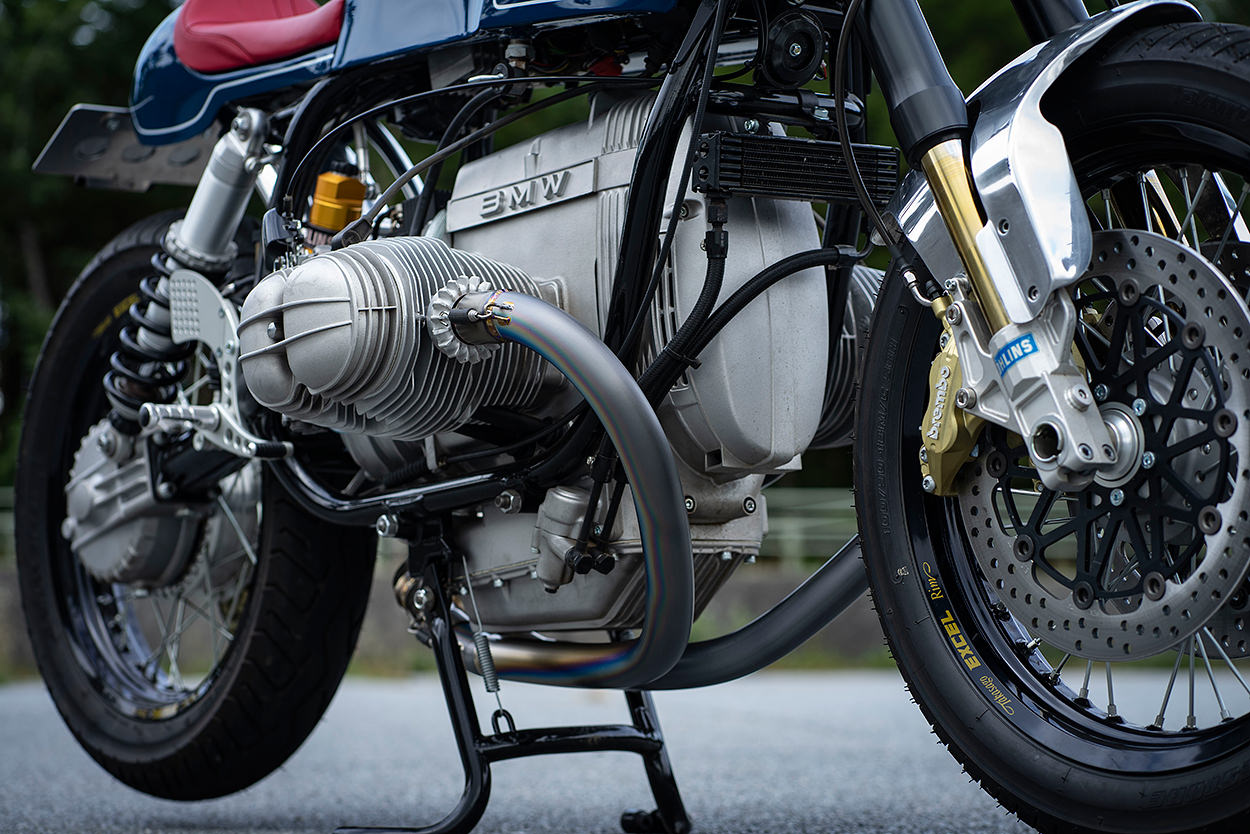 Shiro’s modifications have turned the big tourer into a more sports-focused machine, ditching the heavy stock bodywork and raising the dynamic abilities. It’s not a million miles away from the approach he uses for the BMWs he races at the Tsukuba and Fuji Speedway circuits. 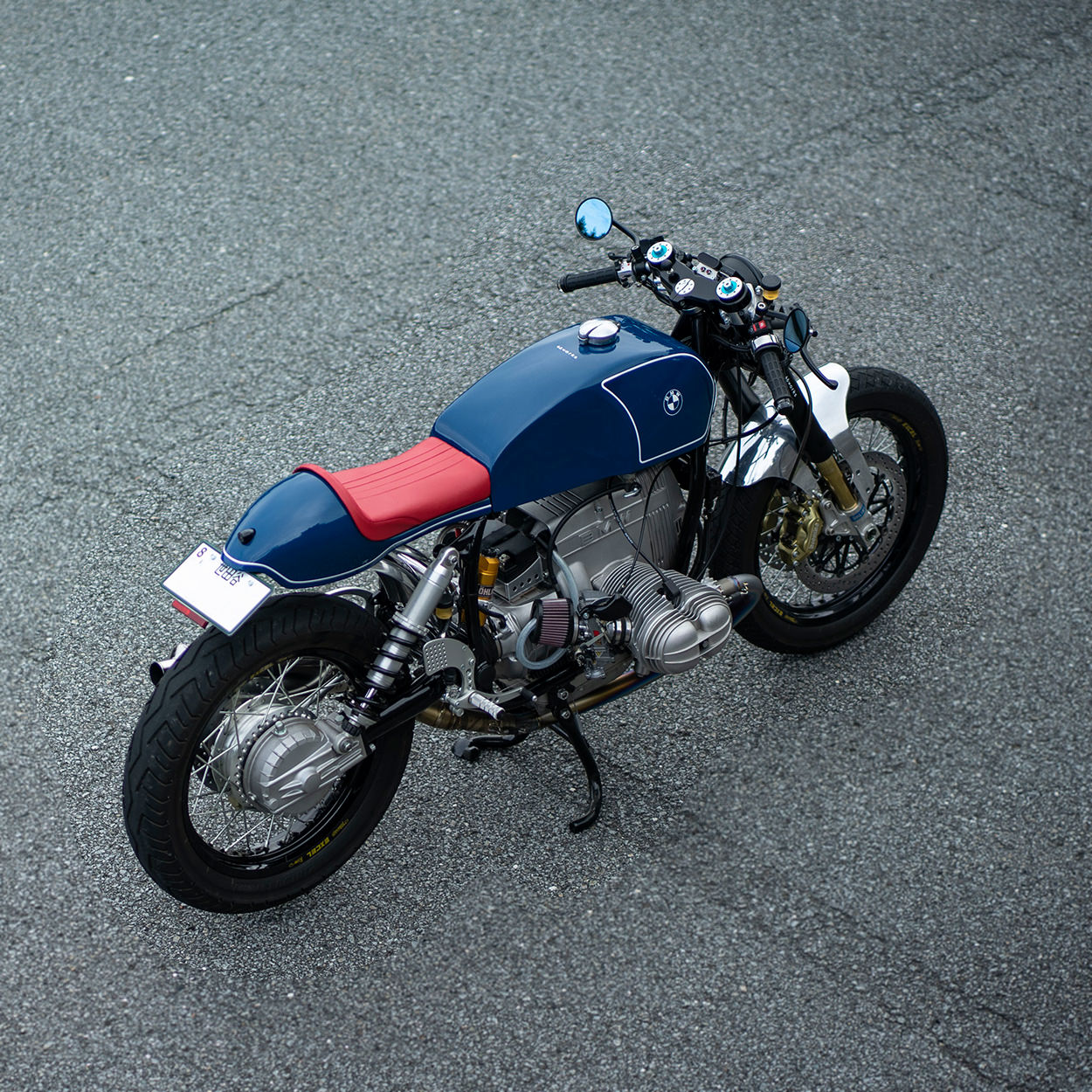 “It’s light, sharp handling and comfortable, with a powerful engine, sophisticated controls, and design details that stand up to close inspection. I test rode it for over 100 km after I finished it—and it was so much fun to ride, I forgot the effort and cost that went into it.”

The effort that went into this restomod was considerable, and given the cachet attached to Nakajima’s skills in Japan, it probably wasn’t a budget build either. 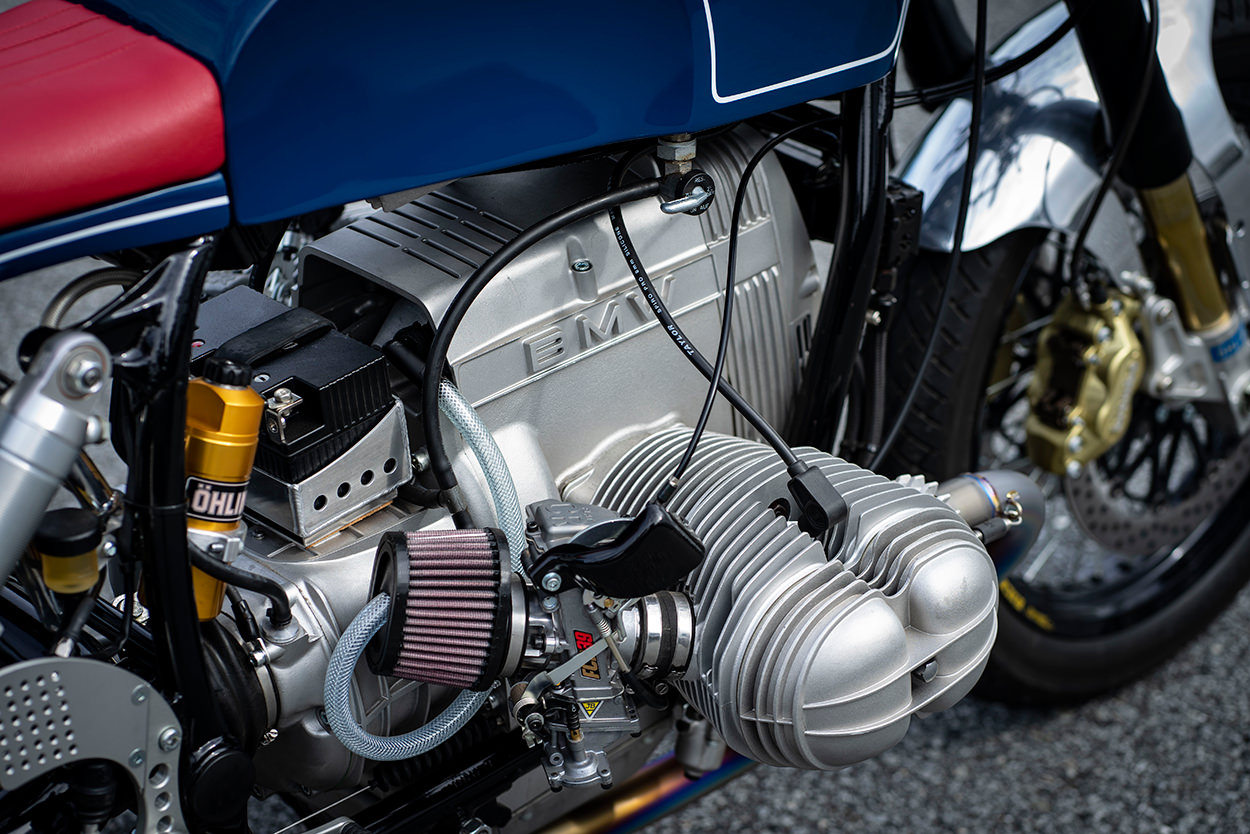 For starters, the air-cooled boxer engine and gearbox were stripped right down, blasted clean, overhauled, and blueprinted back to factory spec.

The Bing carbs have been replaced by more effective smooth bore flatside Keihin FCR39 units, and Nakajima has crafted a full titanium 2-into-1 exhaust system to match—with a one-off titanium muffler built by a local specialist. 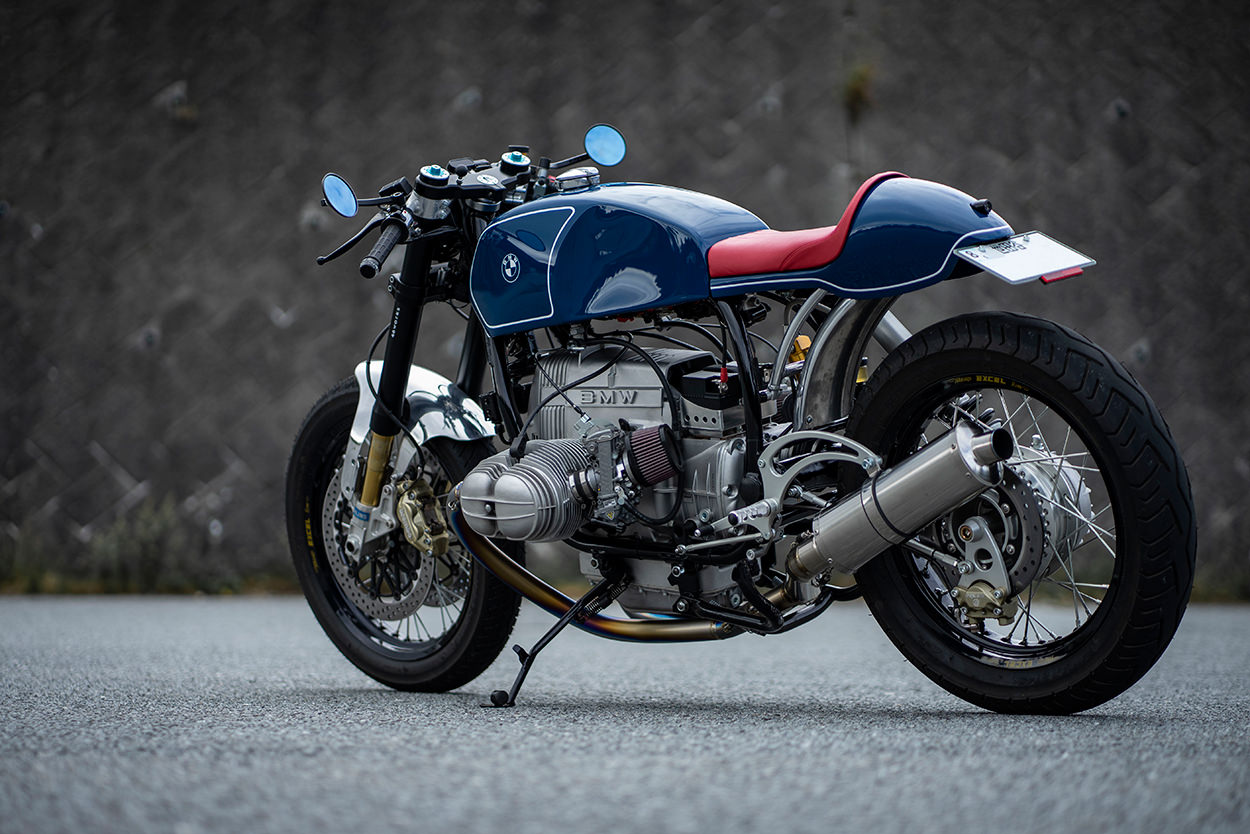 Nakajima reveals that he took the USD Öhlins forks from a Ducati, modified the internals, and clamped them in place with a custom-made steering stem and triples.

The clip-ons come from the Japanese manufacturer Battle Factory, and house classic Kawasaki switchgear on the left, and Honda on the right. The sole instrumentation is a Motogadget motoscope mini LED display, with Motogadget mo.blaze bar-end turn signals handle blinker duties. 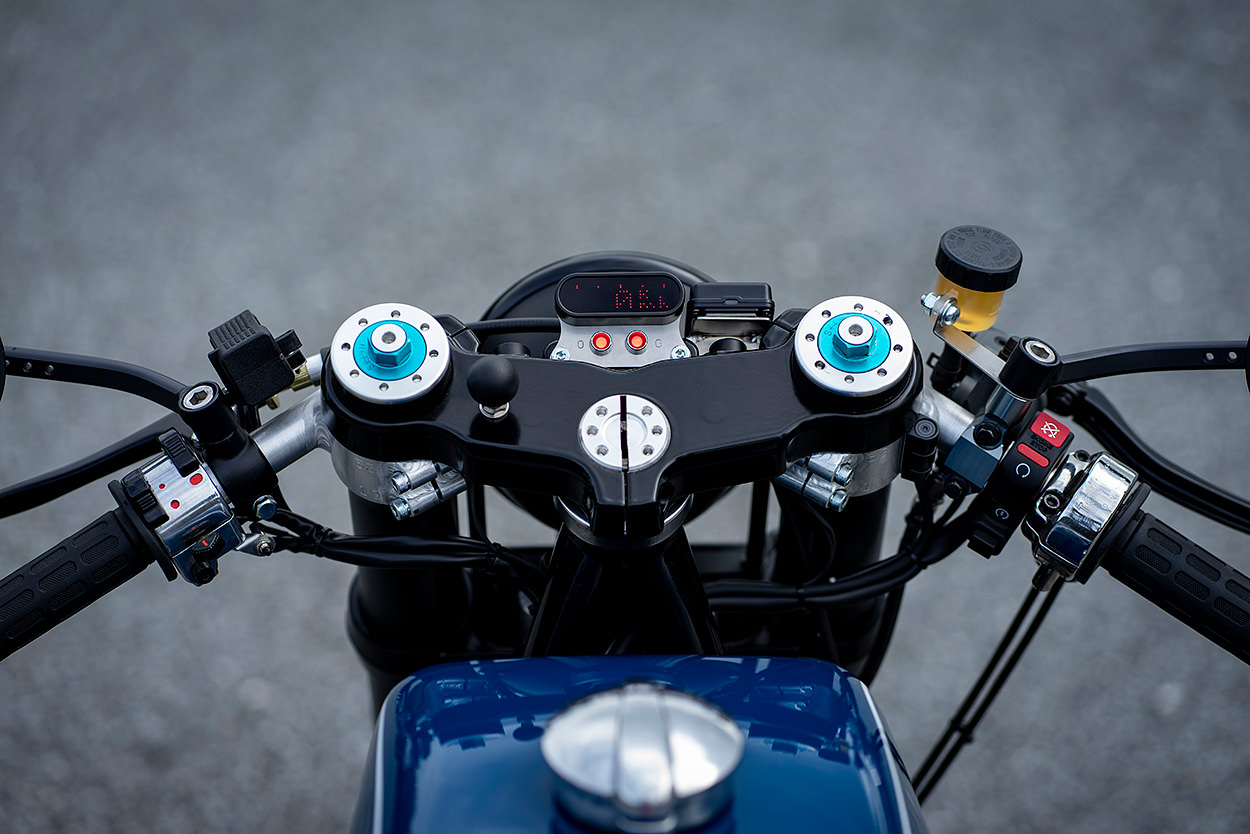 A shimmer of gold reveals an Öhlins monoshock at the back, and the 18-inch wheels are Excel, shod with fresh Bridgestone Battlax BT45 tires under raw aluminum fenders.

The rear hub is a one-off, and not only a thing of beauty, but also a measure of Nakajima’s engineering talent—along with the hand-made foot controls. 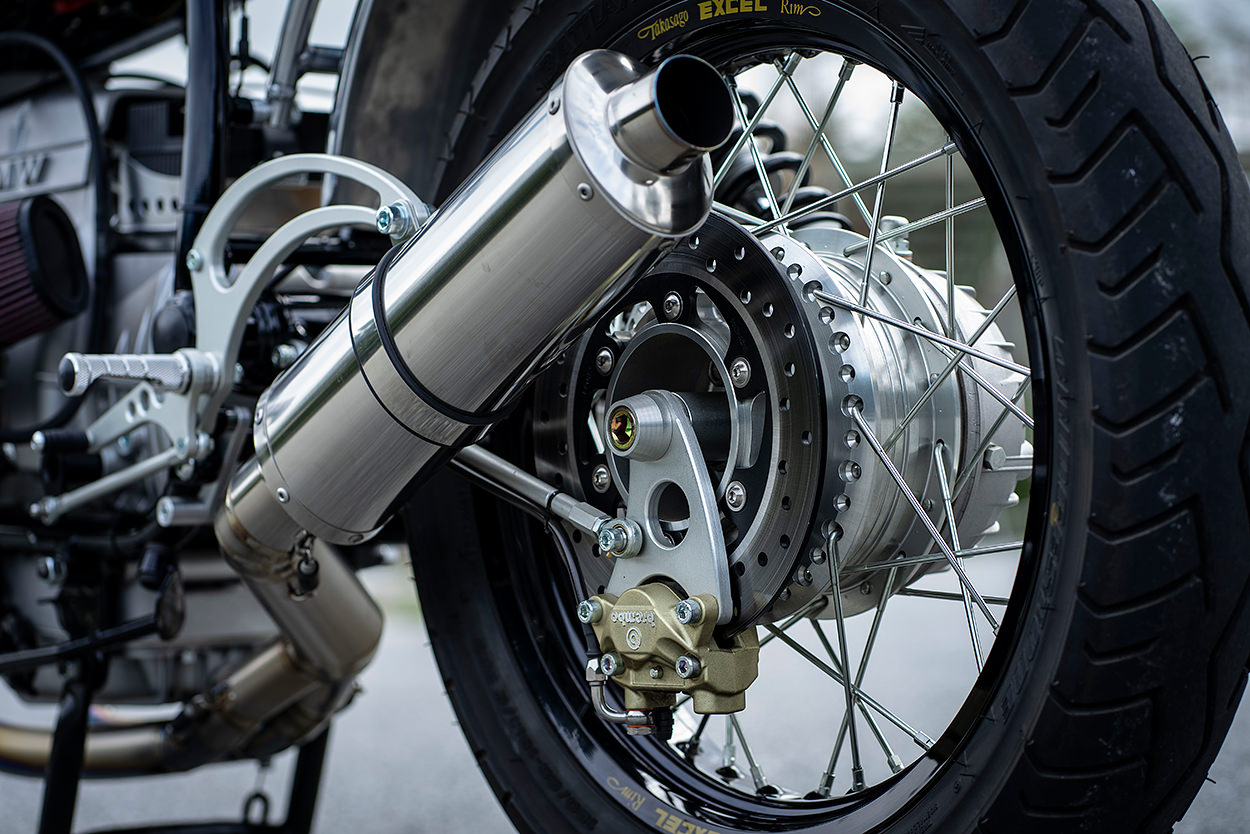 There’s nothing custom about the brake system though, which is a solid Brembo setup, from the master cylinders to the discs—which are twin at the front, with four-pot calipers.

The showroom R100RS has a long back end, with a double seat and a smidge of bodywork behind. That’s ideal for touring but not for carving corners, so Nakajima-san has reworked the frame to support a solo seat—and a small but elegant tail unit. 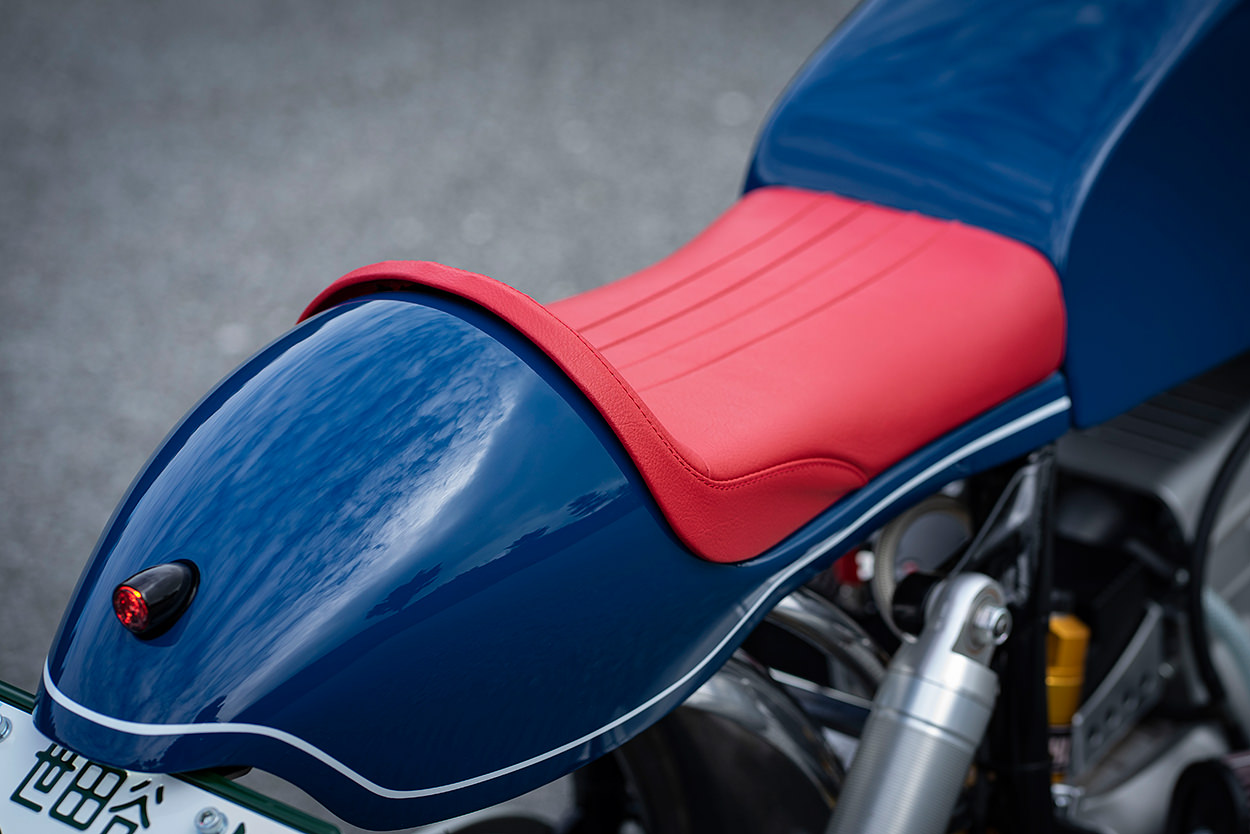 Above the new aluminum frame tubing, the restyled tail unit flows into a hand-beaten aluminum tank, with subtle knee indents. It’s simple and more angular than you’d typically find on a classic BMW, but avoids the identikit look of many BMW café racers.

Despite the French Blue hue of the paint, Nakajima cites vintage British sports cars as the main inspiration for this build: “Not a specific car model, but more of an ‘image’,” he says. 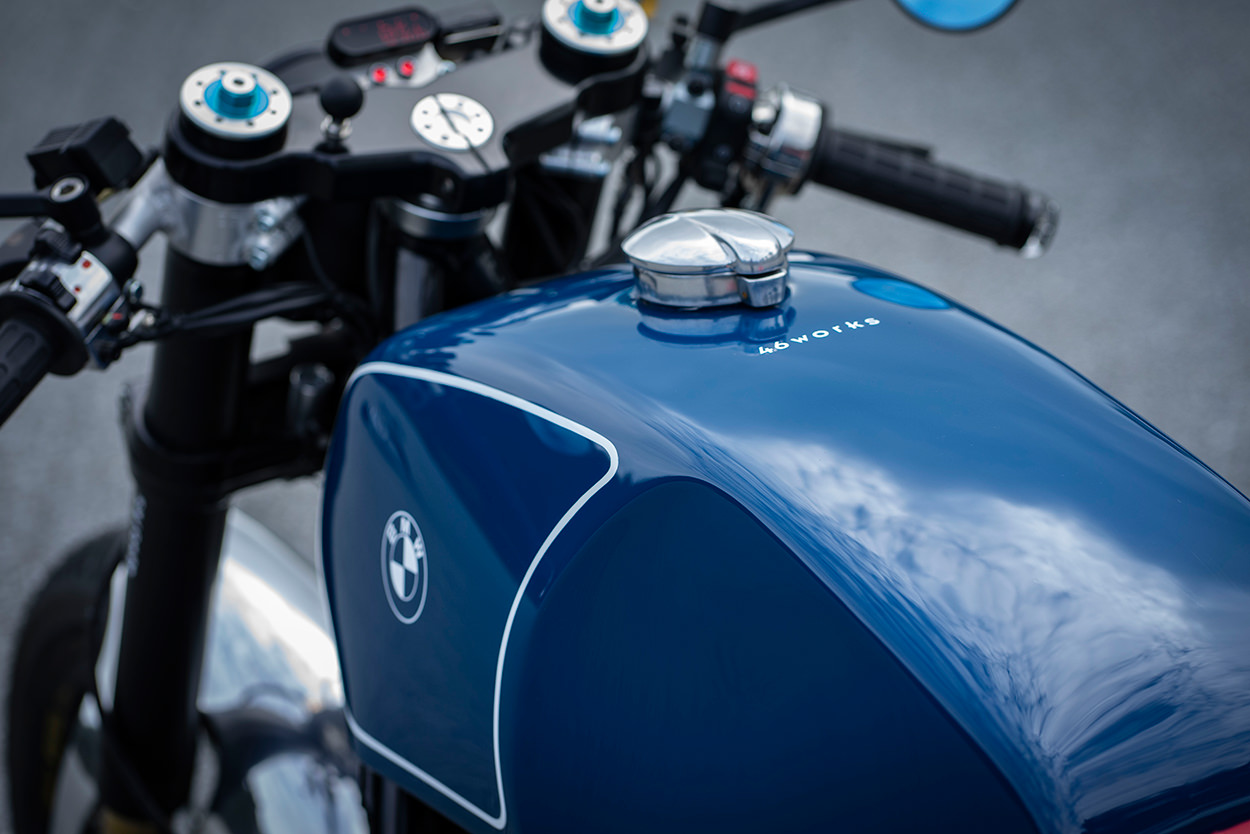 There’s a lot to be said for riding (or driving) an old school, bare-bones machine that’s essentially an engine, wheels, and a fuel tank.

But if you add Nakajima’s craft skills to robust German engineering, we reckon you’re more likely to arrive at your destination with this lovely BMW than some older British vehicles… 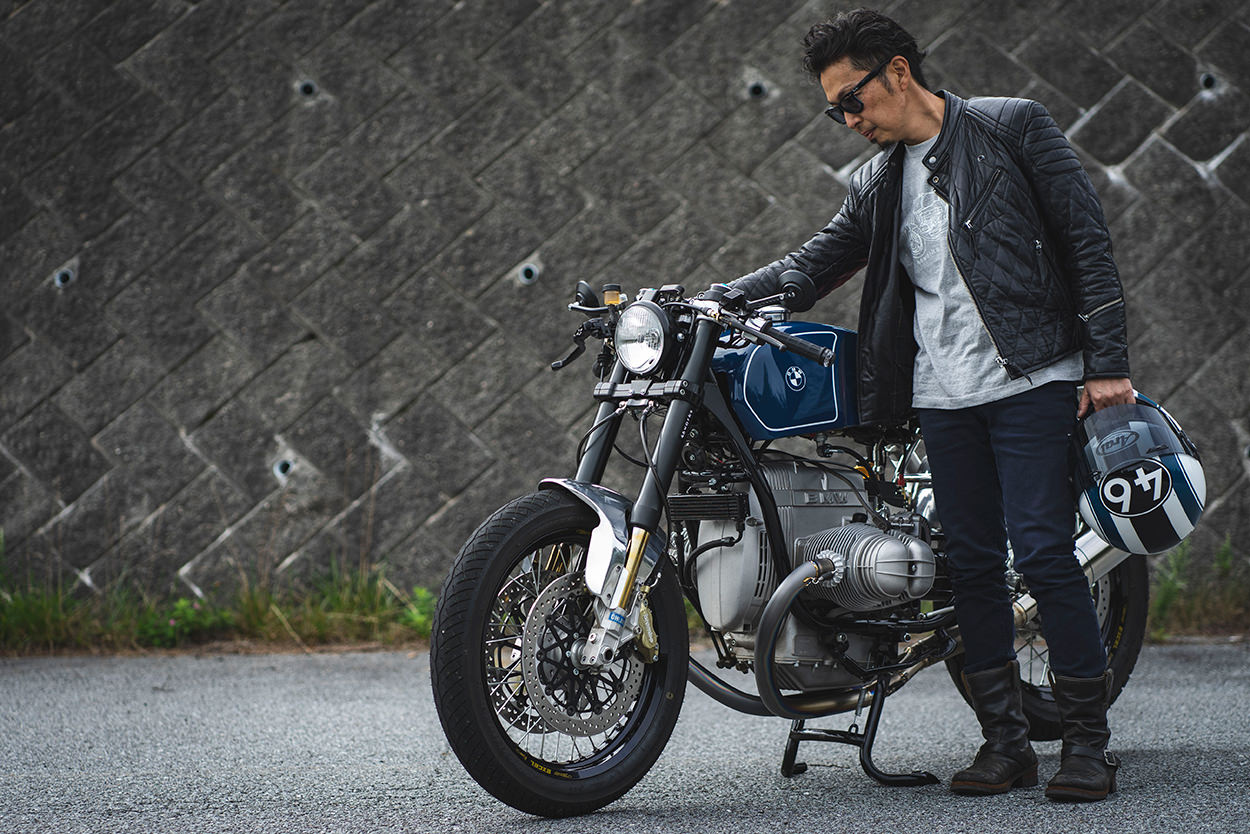