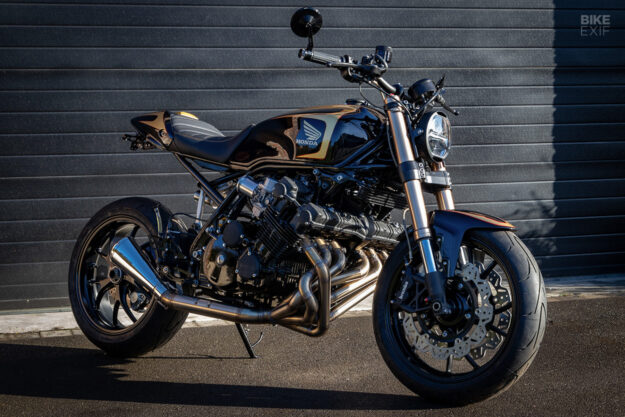 A year after he turned his custom motorcycle building hobby into a business, Dimitri at Lys Motorcycles figured it was time to level up his portfolio. So he set time aside to build a show bike—a rolling portfolio piece that he could take to events. Going for max. impact, he took a 1982 Honda CBX 1000 and cranked it up to eleven.

It was a hit, and Dimitri was soon fielding the sort of requests that custom builders usually have mixed feelings about; “Make me something just like it, except for…” That’s the price you pay for cracking the formula. 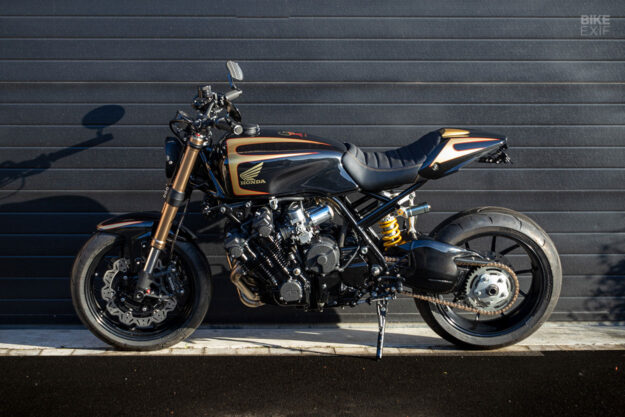 This particular CBX 1000 is now the third one Dimitri’s built, and came with similar instructions. “The customer asked for something similar to my first CBX,” says Dimitri, “but with handlebars instead of clip-ons, and a two-up seat with a cowl. I think that was a deal with his wife.”

To kick things off, Dimitri sourced another 1982-model donor—the sport-touring version of the CBX that featured Honda’s ‘modern’ Pro-Link mono-shock system. From his workshop in the northern French region of Hauts-de-France, he applied the same philosophy to this CBX as he did the last one. 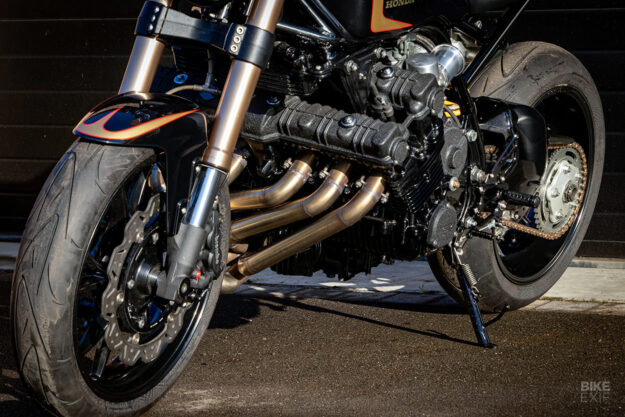 The goal was to create an aggressive café racer, with upgraded running gear and an emphasis on the Honda’s mighty six-cylinder motor. Dimitri knocked it out the park; this one’s a total ripper.

For starters, he overhauled the engine with new sundries, then painted the outside with a mix of gloss and wrinkle black finishes. The carbs are original, but they’ve been improved with a Dynojet kit. They inhale through six billet air intakes, covered with gold mesh screens. 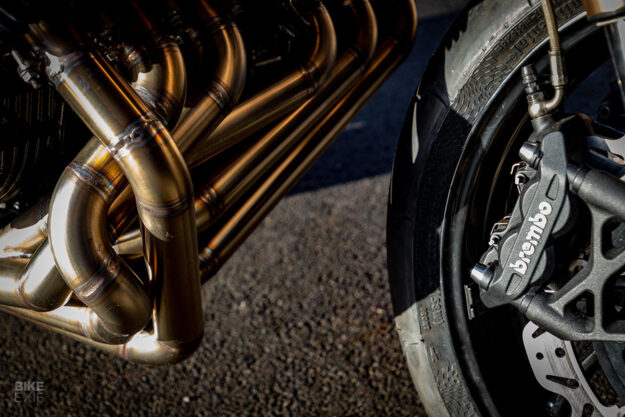 Lower down is a burly six-into-one exhaust system that could rival Medusa on a good hair day. The headers were fabricated by frequent Lys Motorcycles collaborator, Irnox, while the muffler comes from Spark.

Under the hood is a fresh wiring harness, built around a Motogadget control box and a Lithium-ion battery. Both are stashed away in a custom-made box underneath the seat. 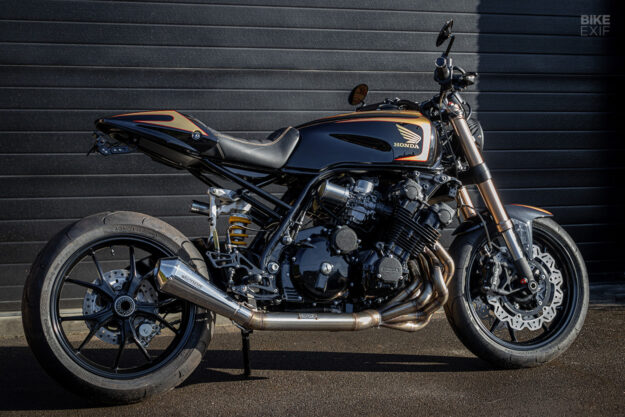 Anyone with even a cursory knowledge of older Hondas will immediately notice that this CBX has shed its original composite wheels. It now rolls on 17” alloy hoops—and although they damn near look like a matching set, they come from two different sources.

The front wheel’s from a Triumph Speed Triple R, which also donated its upside-down forks and twin Brembo brakes. But the back wheel, single-sided swingarm and rear shock were all scalped from a Ducati 848. 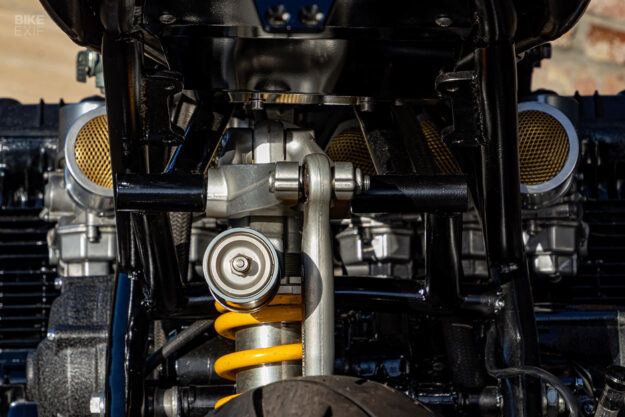 Sitting on top is a custom two-up seat, upholstered in a perforated vinyl with contrasting stitching. A removable cowl covers the passenger seat, adding a hint of café racer style. The bike features removable passenger pegs too. 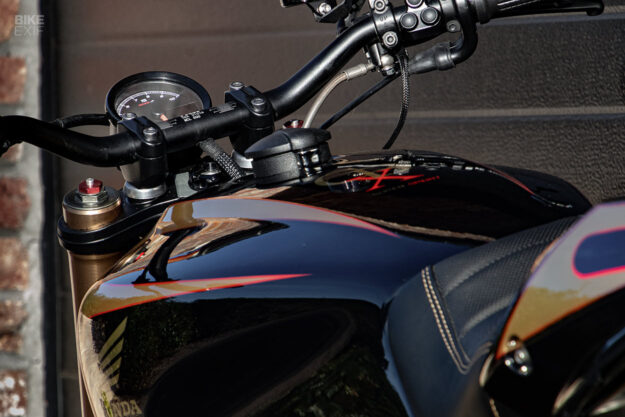 The stock tank sits up front—but despite its inherent heft, it blends well with Dimitri’s changes. Just in front of it are upright bars from TRW, fitted with Motone switches, and Motogadget grips, bar-end mirrors and turn signals. The speedo and LED headlight are both Koso parts.

Out back is an adjustable license plate bracket, which also hosts a pair of three-in-one LED taillights. A set of repurposed Honda CBR rear-sets round out the list. 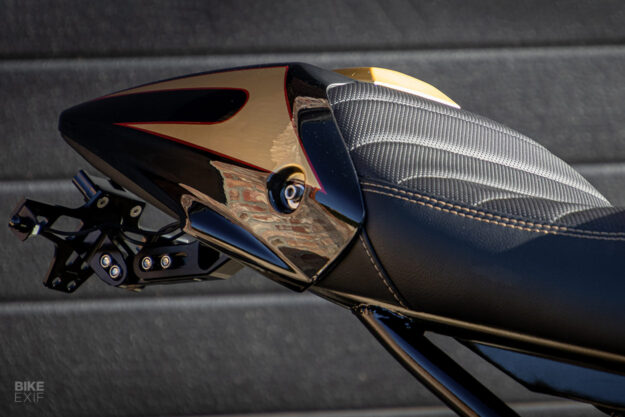 The CBX’s new livery is as striking as its stance. The bodywork’s covered in gloss black, punctuated by hand-painted gold scallops and red pin-striping.

Dimitri’s ticked every box—this CBX looks sharp, is well-equipped and probably sounds bananas. If he keeps this up, his order books are going to burst. 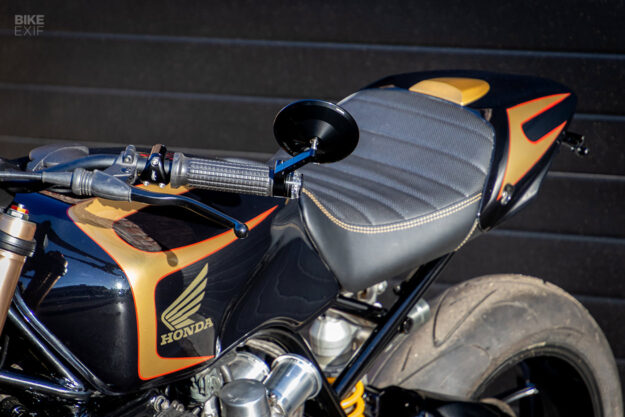