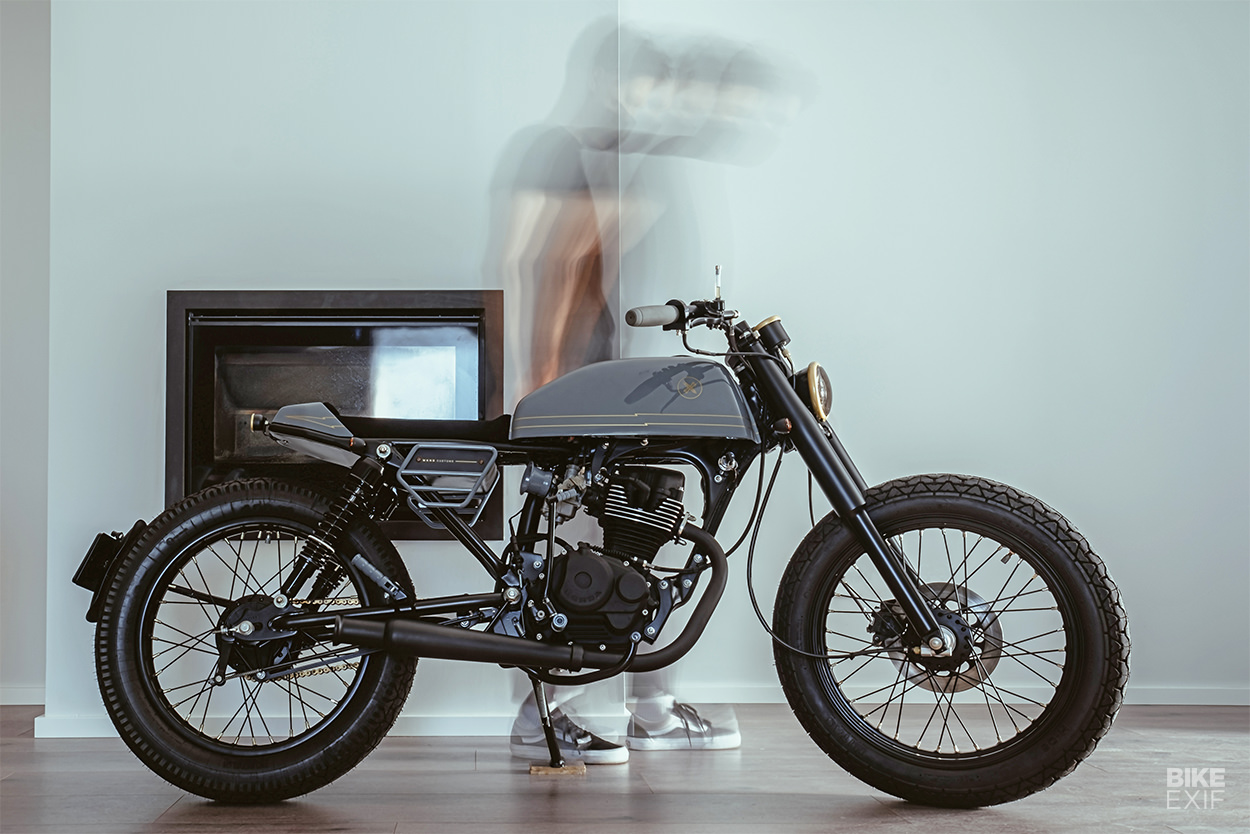 There’s a tipping point where a hobby turns into a career, and Sérgio Almeida is sitting on it. Based in Portugal, he started WKND Customs while holding down a full time job as a designer—hence the name. But thanks to an influx of orders, he now splits his daytime hours between bikes and freelance art direction work.

It’s easy to see why. This 1998 Honda CG125 scrambler is only his third build, but it’s so tastefully executed that you’d swear he’s been doing it for years. 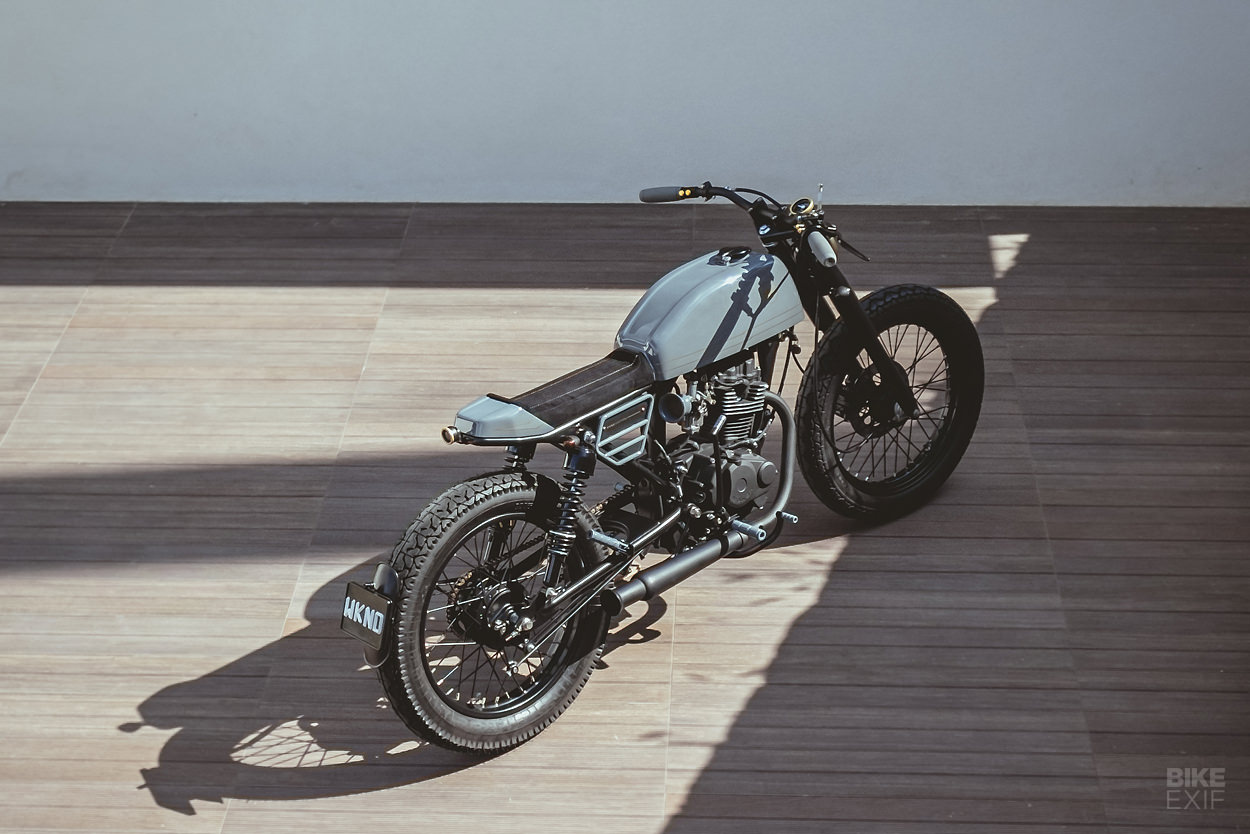 It took some elbow grease to get it looking this good though, partly because the donor bike was a total wreck. “The client bought the bike very cheap, and brought it to me dismantled in the trunk of his car,” Sérgio tells us.

“After putting it together I noticed that it was not straight. And given the bent bars, broken levers and scratches on one side, it likely had a crash in its previous life.” 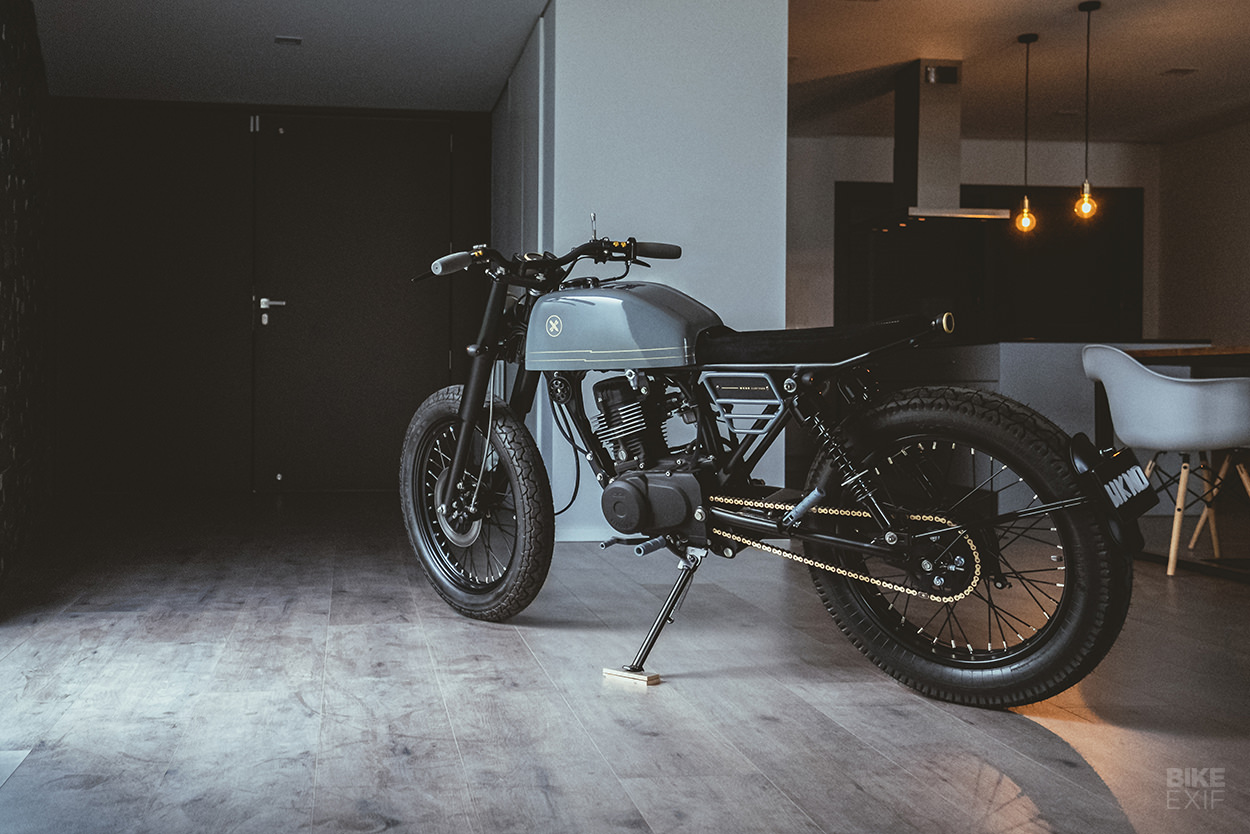 The first job on the list was to sort out the front end, so Sérgio scalped the forks, front hub and disc brake from another bike and tried to make them fit. But once he’d fabricated a custom stem to fit them, he realized the damage to the frame was far worse than he initially thought.

So he hit pause, sourced a secondhand CG125 frame, and rebooted the project. 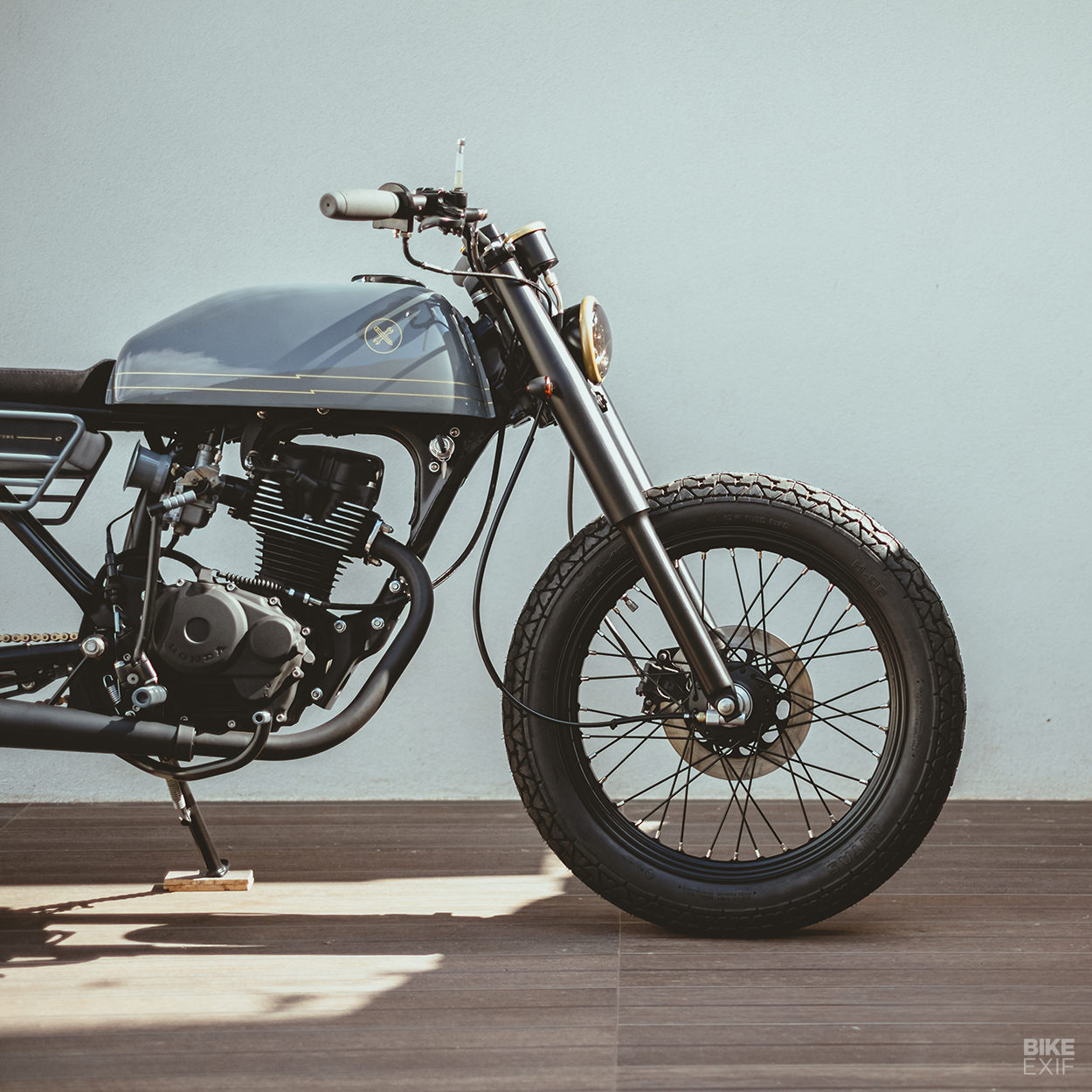 The ‘new’ forks were lowered internally, and their fender mounts were shaved off. Then Sérgio hand-rolled and welded up a pair of custom fork covers to bulk them up. They’re wider than the OEM units too, which left room to lace up a pair of 18” rims with slightly chunkier rubber.

Out back, he added two inches to the swingarm, and installed a pair of aftermarket shocks. The work included building new connections for the rear drum brake too. 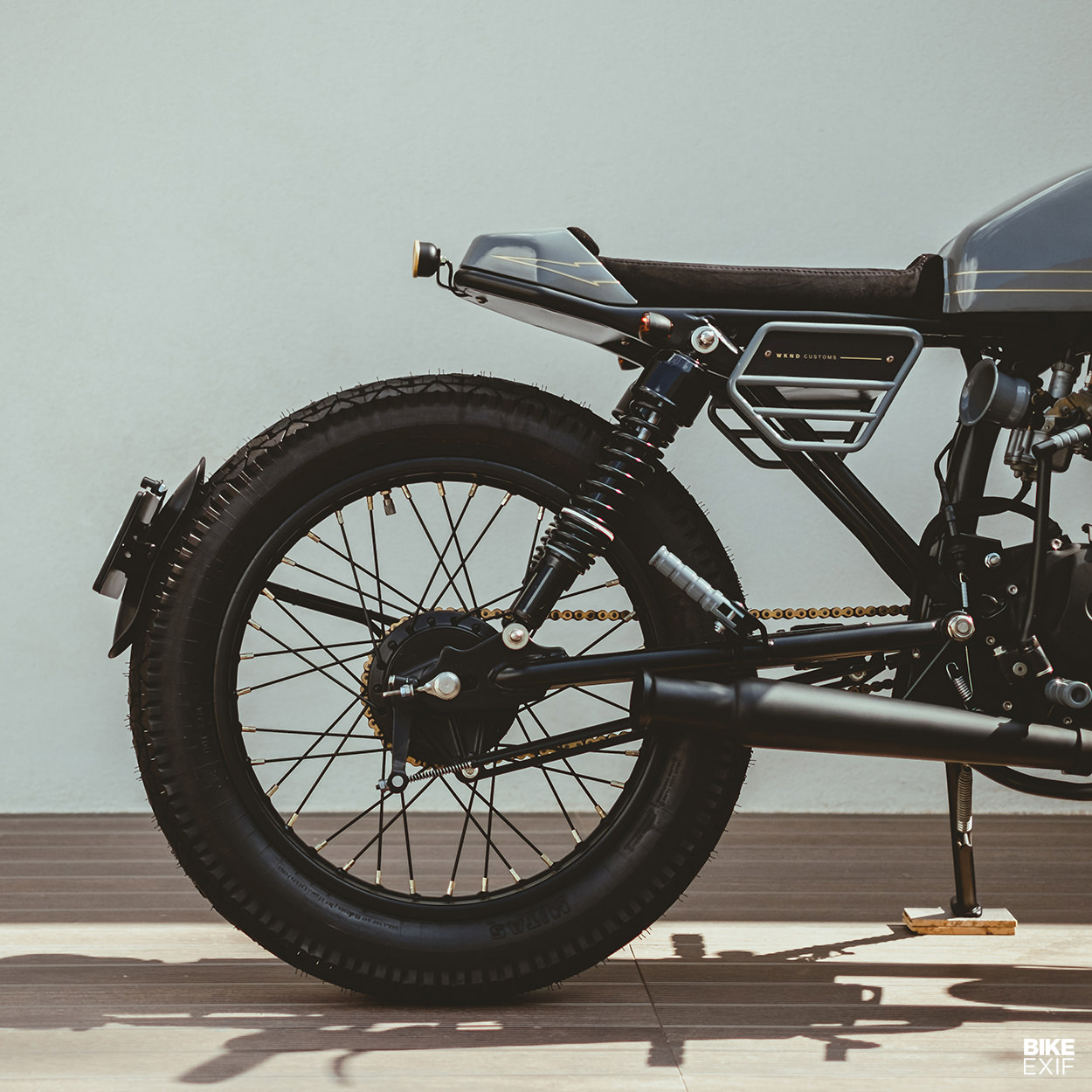 Sérgio’s projects always start out as renders that his clients can sign off on. Here, the design called for a Honda CB200 fuel tank—so it was off to the classifieds to get one. He usually prefers only buying vintage tanks with original paint on for obvious reasons, but decided to roll the dice on a repainted tank that popped up nearby.

It turned out to be a dud, with layers of rattle-can paint hiding rust and dings, so it had to be sandblasted, repaired and re-lined. Sérgio fabricated new mounts and installed a CB125 petcock, then turned his attention to the subframe. 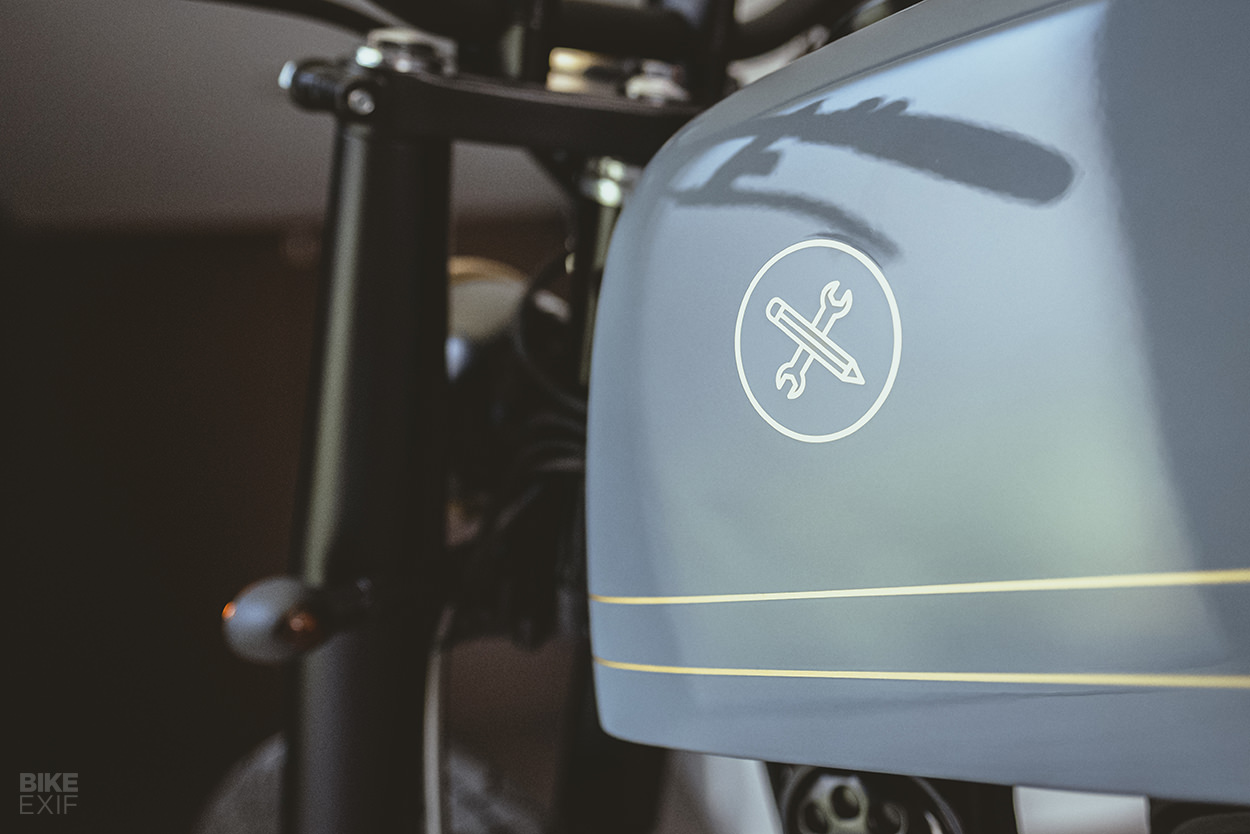 “Funnily enough, I had just bought a tube bender,” he tells us, “but to match the square look of the tank I decided to make an angular rear loop instead.” Tucked underneath is a welded-in battery tray, and there’s a small LED taillight mounted out back, embedded in a handmade housing. The license plate sits on a custom-made rear hugger.

Next, Sérgio shaped a small seat hump. It’s a tidy design; there’s a tiny back pad to interface neatly with the seat, but the hump’s removable too, revealing the pillion seat underneath. 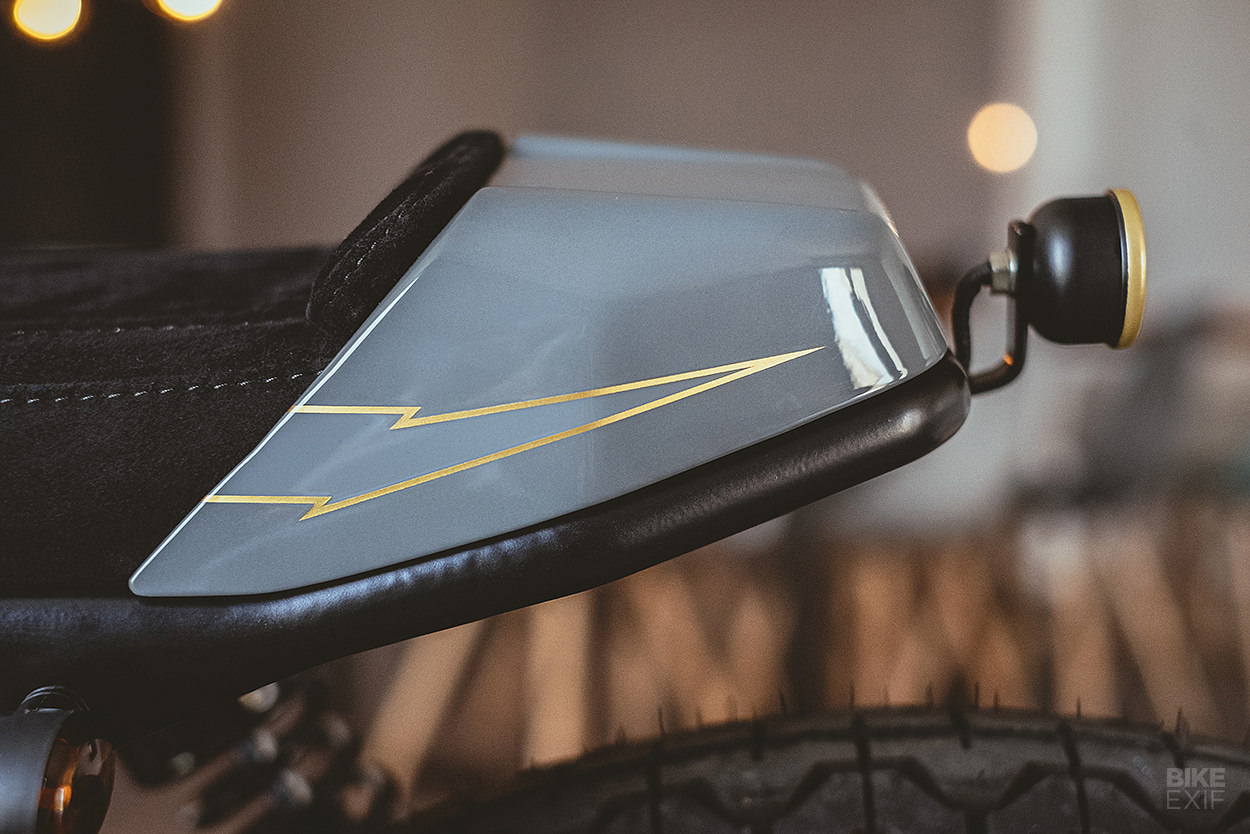 “I don’t have much experience with metal shaping,” he admits, “but I always throw myself into these challenges when I make the digital render, without any idea of how I’m going to make it happen later!”

Another challenge was the side panels. “I’m not a big fan of a huge empty section under the seat, so I always try to think of cool solutions, instead of simply hiding things away.” Here, the solution was a mix of aluminum rods and panels, creating a form that mimics flat track number boards. 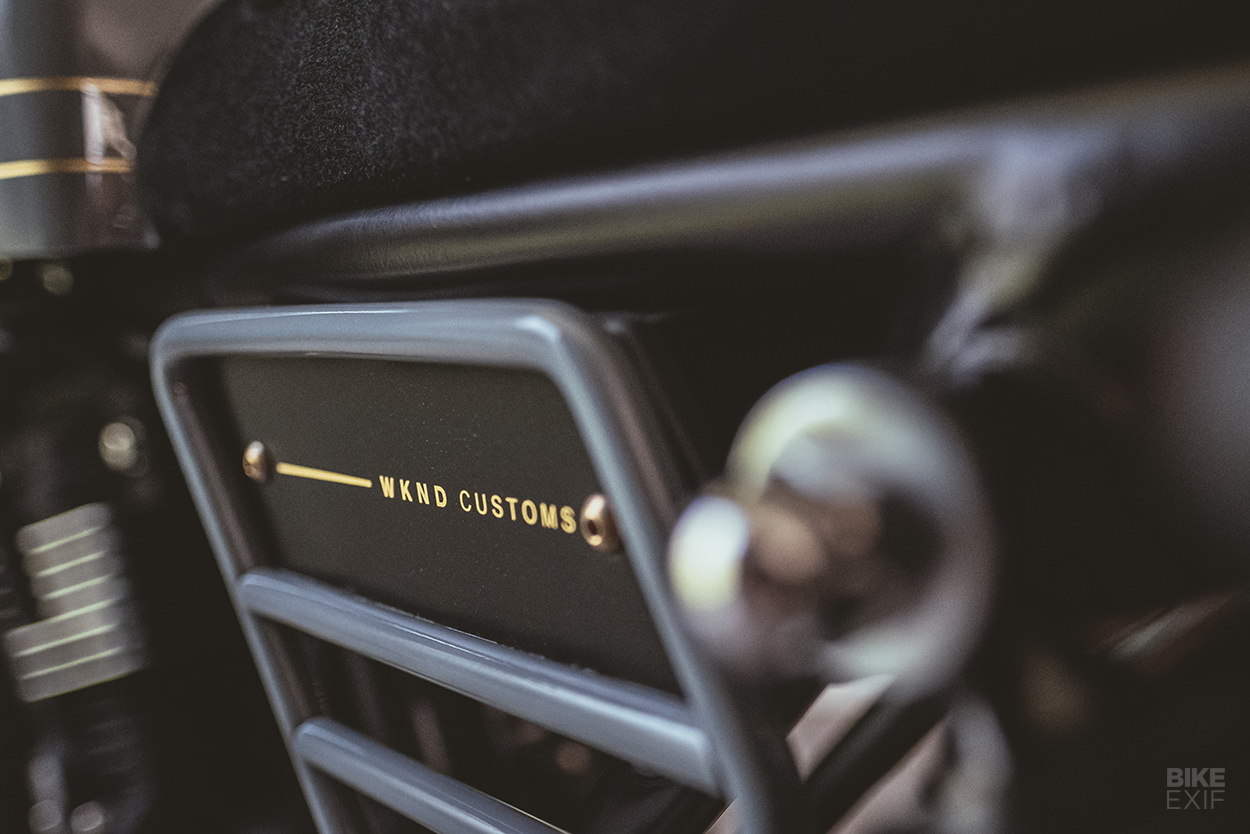 The rest of the Honda is wrapped up with a slew of tasteful touches. The cockpit features new bars, Biltwell grips and custom-built micro switch assemblies. Sérgio even developed his own electronics controller with help from a tech-savvy friend; a part he plans to sell later on.

There’s a Bates-style headlight out front, and an off-the-shelf speedo just above it. New aluminum rider and pillion pegs were fitted too, along with matching trim on the gear shifter, brake pedal and kickstarter. Sérgio had to fabricate a new side stand too, because the original was damaged in the suspected crash. 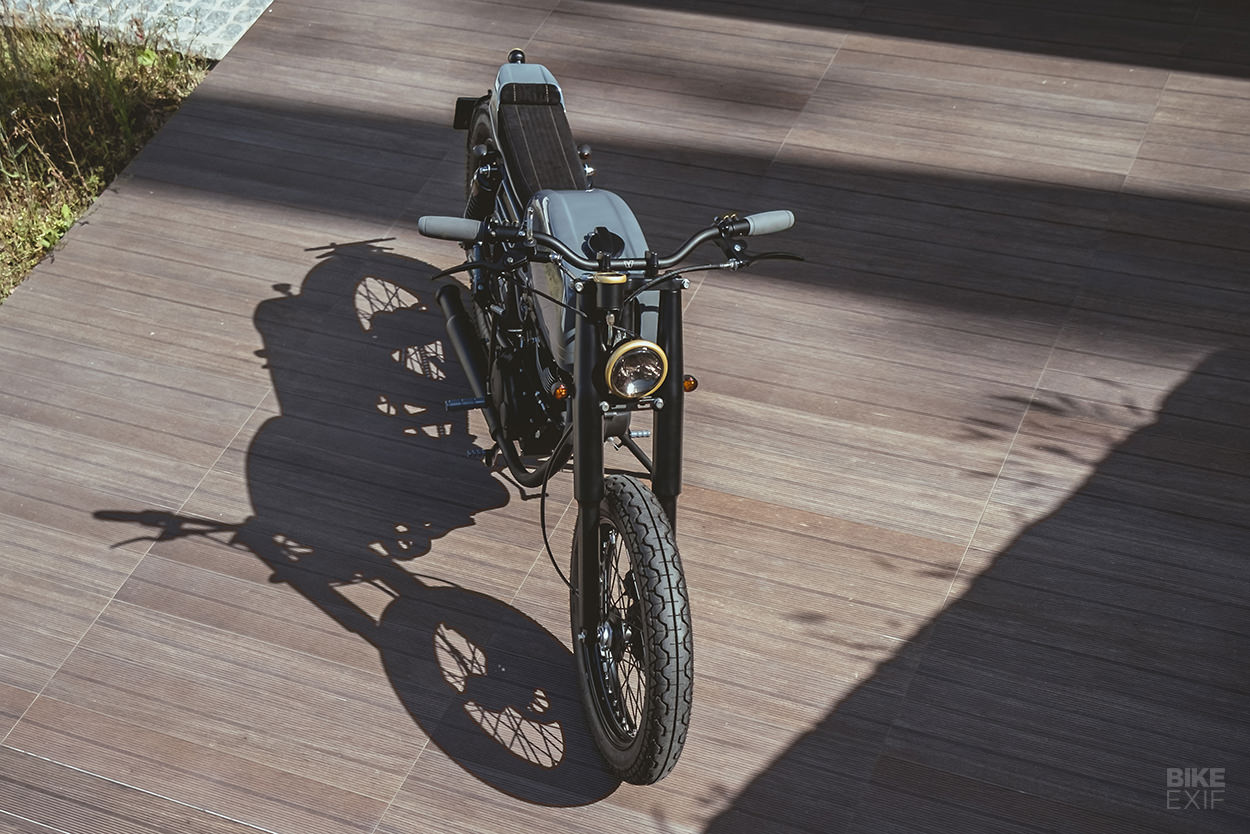 Then there’s the work that went on under the hood: a full tear down and thorough service, a carb rebuild and a full complement of new seals and gaskets. Every last piece of hardware was either replaced by a stainless steel item, or restored and then zinc plated or chromed.

Finishing off the CG125 is a subtle Nardo Grey paint job, with a few tasty gold highlights. There’s fresh paint on the engine too, and most of the parts have been powder coated in satin black. Alcantara on the seat adds even more class. 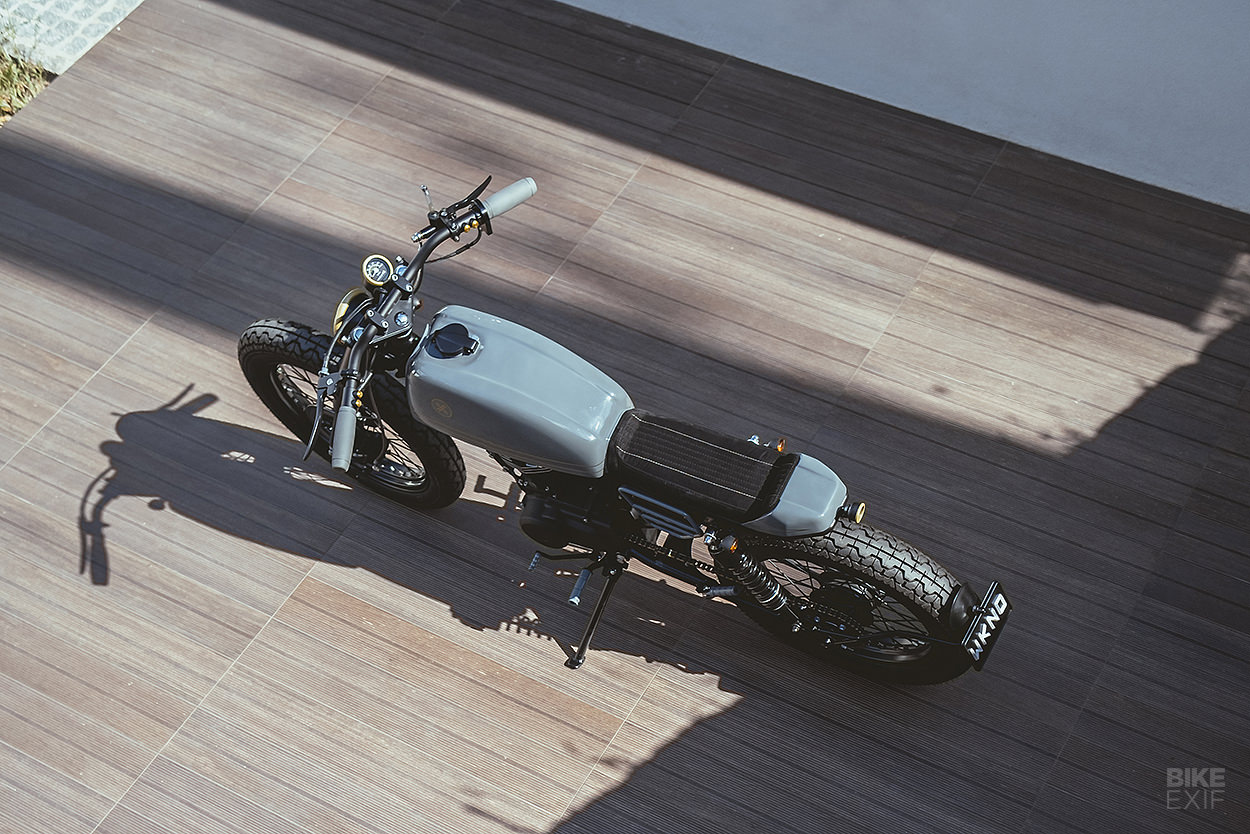 It’s stellar work from a builder who, by the looks of things, is only just getting started. Sérgio tells us he currently has four more builds in his queue, so who knows—maybe he’ll be doing this full time soon. 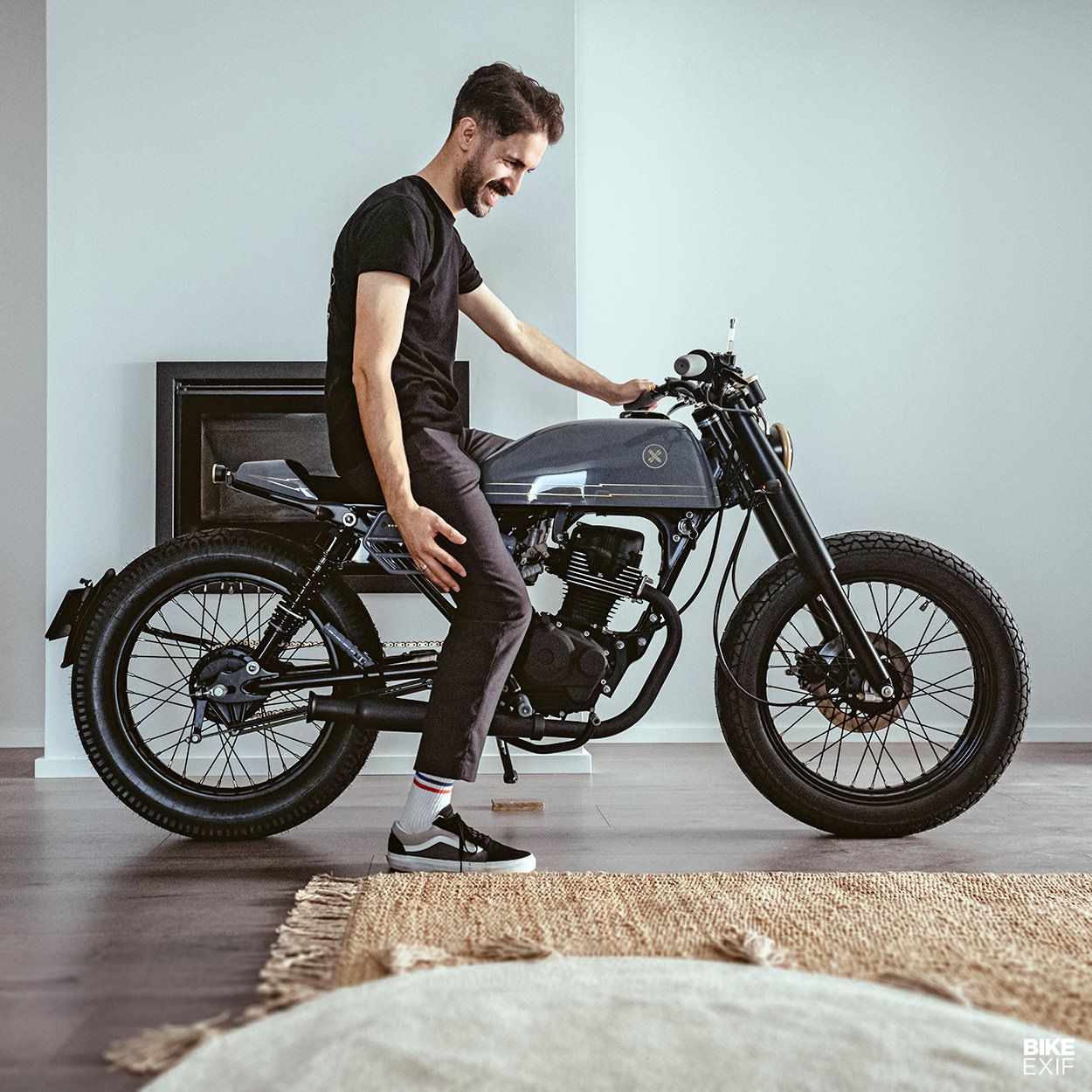