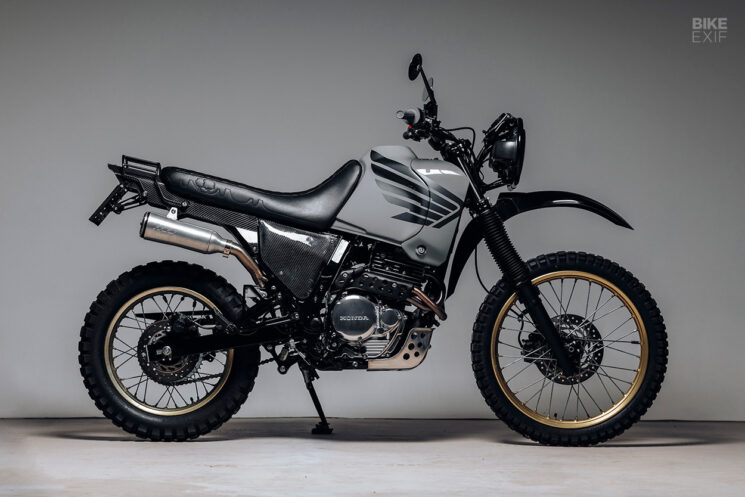 Many Honda Dominator customs use the same template. Swap the fuel tank for something slimmer, trim the subframe and you’re halfway there. But there’s another way to go about it; lean into the Dominator’s adventure bike DNA to build a utilitarian scrambler.

That’s the path that the Hungarian workshop, Neuga, took with this 1994 Honda NX650 Dominator. Wrapped in muted finishes, and sporting an imposing stance, it has the look of a retro Baja 1000 race bike—albeit with an air of refinement. 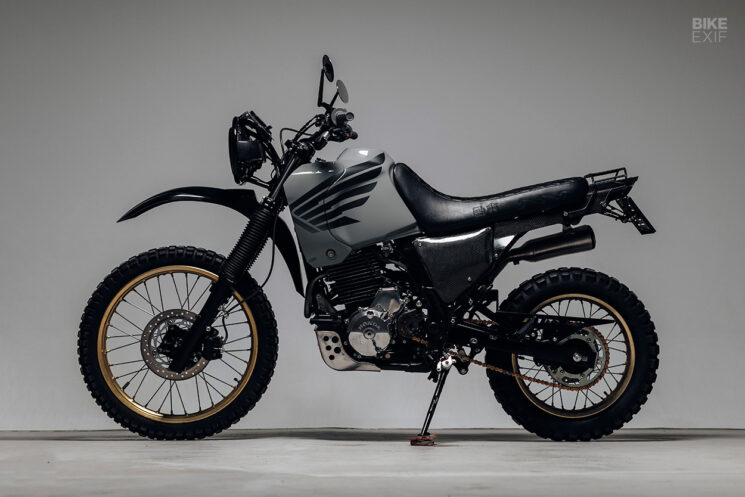 “This build was an ‘in-house’ project, for one of our crew members,” says Neuga founder, Benedek Eszteri. “It took about six months from teardown to finish. The idea was to have a bike as trustworthy as it gets—and we couldn’t think of a better donor than a Dominator.”

“The donor was in okay condition, but it was torn done completely, measured and rebuilt with everything replaced that had even slight wear. We wanted to have a double headlight and some carbon—that was the basic idea. Everything else took shape during the project… it was kind of freestyle.” 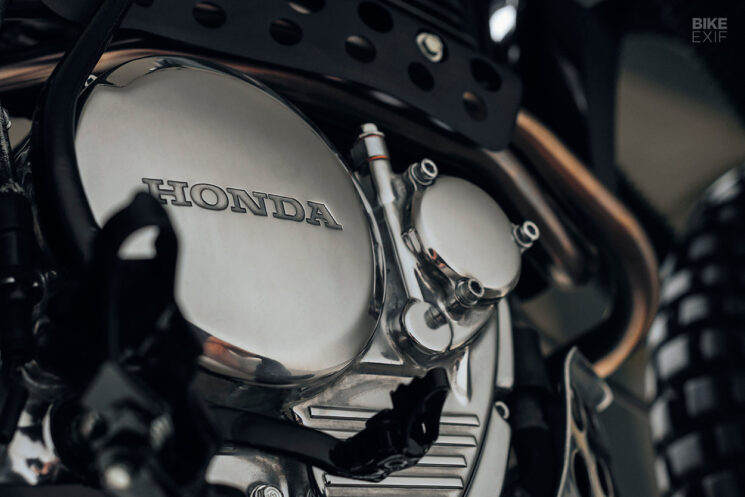 Neuga went deep, starting with a full engine rebuild. And we do mean full—there isn’t a single component that hasn’t been replaced or refurbished. It looks brand new on the outside too, with a fresh coat of heat resistant black paint punctuated by the polished fins and engine covers. 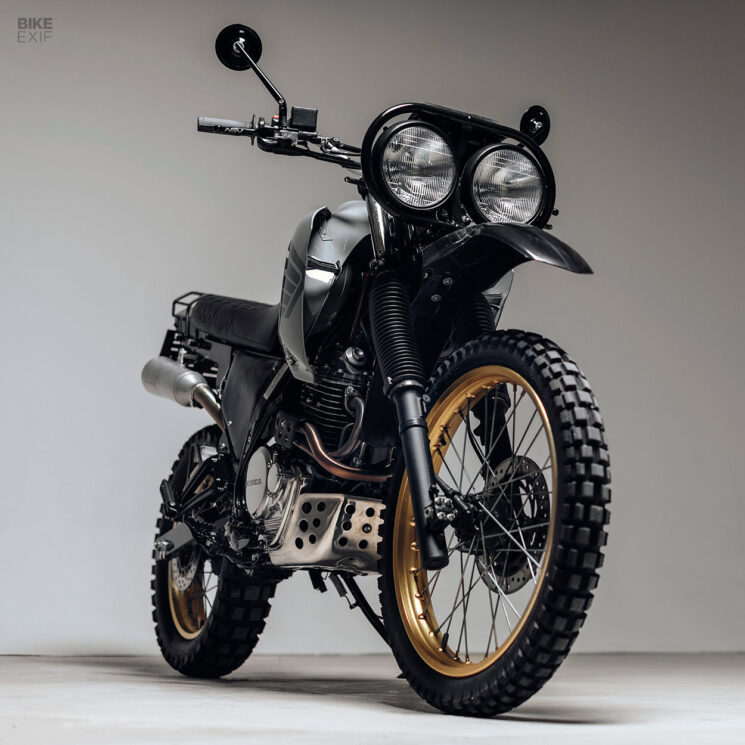 Equal attention was given to the Dominator’s chassis and running gear. Neuga kept the OEM forks, but rebuilt them with new springs, then re-installed them with new steering neck bearings. The rear shock was swapped out for a new YSS unit.

The wheels and brakes are stock, although they look brand new. Every last bearing and seal was replaced, all the fasteners were cleaned and freshly galvanized, and every black component was stripped and re-coated. Neuga rewired the bike too, and upgraded the brake hoses with Goodridge lines. 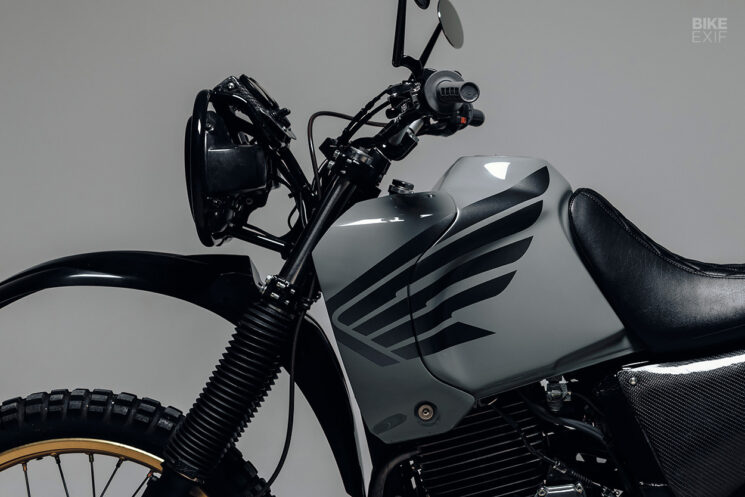 The Honda’s bodywork is a mix of stock, modified, scalped and custom parts. Neuga kept the stock 4.2 gallon fuel tank, so that this build wouldn’t suffer any range penalties. Then they took the OEM front fairing, and trimmed it down to just two ‘wings’ to help round off the front of the fuel tank, visually.

For the seat, they started with the stock pan—then trimmed it, added gel inserts for a plusher ride, and re-upholstered it. Each side of the new seat cover has an illustration stitched into it; the left represent the owner’s favorite surf spot, and the right his favorite BMX trail. 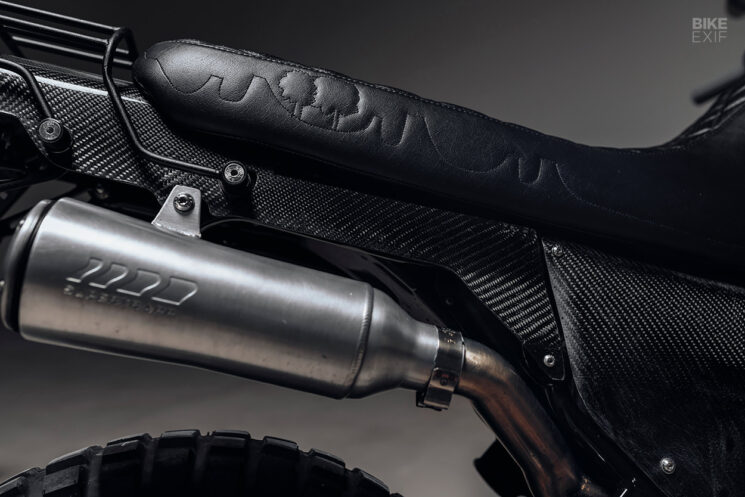 Sitting below the seat is a set of custom body panels, hand-formed out of carbon fiber; “Not that it saves much weight,” quips Benedek. The rear’s finished off with a bolt-on license plate bracket, and a custom-built luggage rack. An LED taillight’s tucked in under the rear lip, with discreet LED turn signals flanking it.

The whole Neuga team is nuts about BMX, so they’re currently also working on a removable BMX rack for the back end. For now, the Dominator’s owner is content to simply lay his BMX flat on the rear rack, and tie it down. 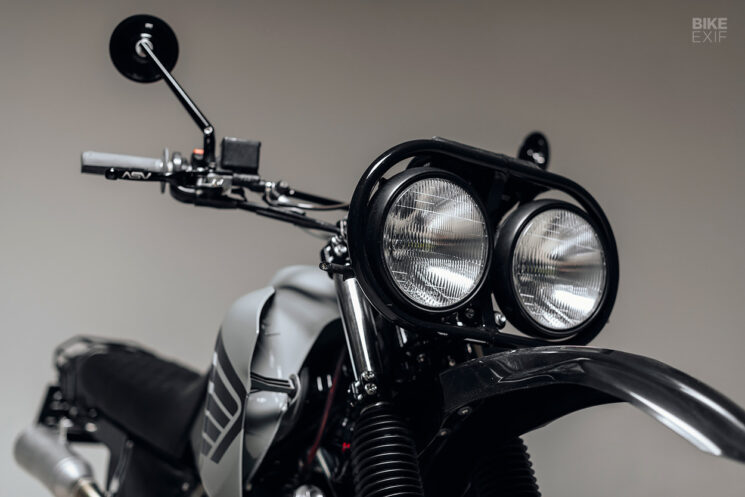 Up front is the full headlight cluster from a Honda XR250 Baja—an arrangement that places two lights inside a ‘roll cage’ of sorts. Neuga refurbished it, before adapting it to fit the Dominator. A plastic fender from a Kawasaki KLX dirt bike sits just below it.

Taking advantage of the extra real estate afforded by the chunky headlights, the team created a carbon fiber dashboard to sit up top. It hosts a pair of Daytona gauges, a couple of custom switches and a charging port. The mirrors and turn signals are Motogadget items, while the handlebars come from Renthal. 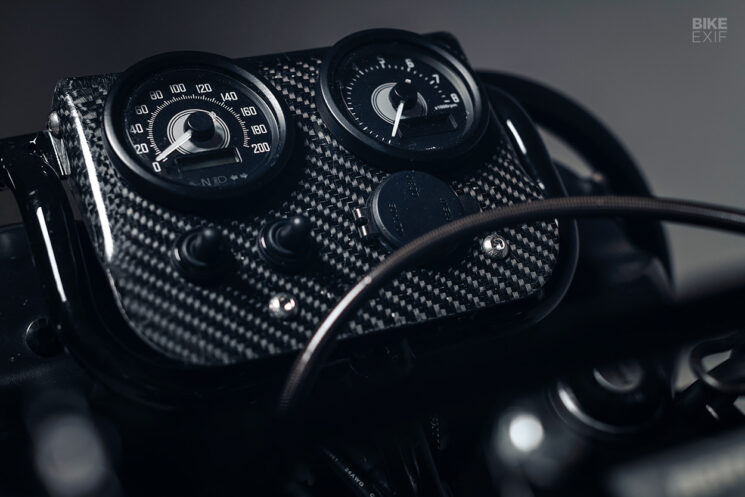 Neuga paid attention to the little things too. The brake and clutch levers are ASV parts, but they’ve been modified to accommodate the stock brake fluid reservoir and choke lever. There’s a custom carbon fiber front sprocket cover lower down too.

The final paint scheme ramps up the Honda’s functional vibe. Neuga stuck to a warm grey for the tank and its side panels, broken only by a pair of super-sized Honda wings. Gold wheels offer a nod to the Dominator’s original design. 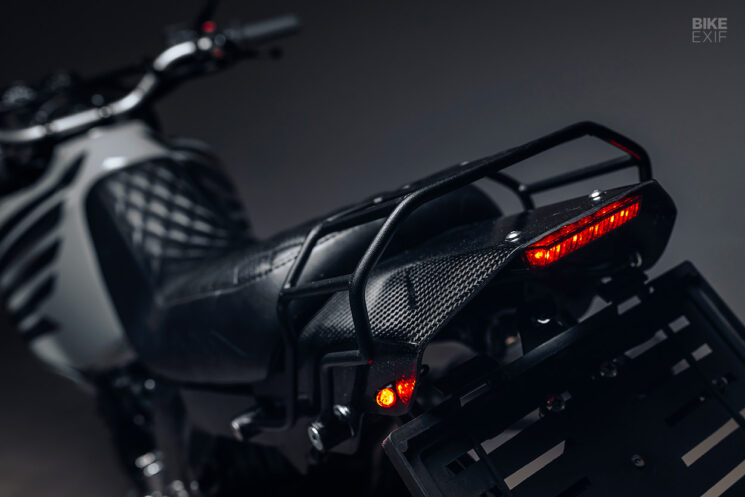 Shod with Continental’s evergreen TKC80 dual-sport tires, this Dominator looks ready for anything. From navigating the streets of Budapest, to hunting down new BMX spots, we’re sure it’s going to rack up plenty of miles. 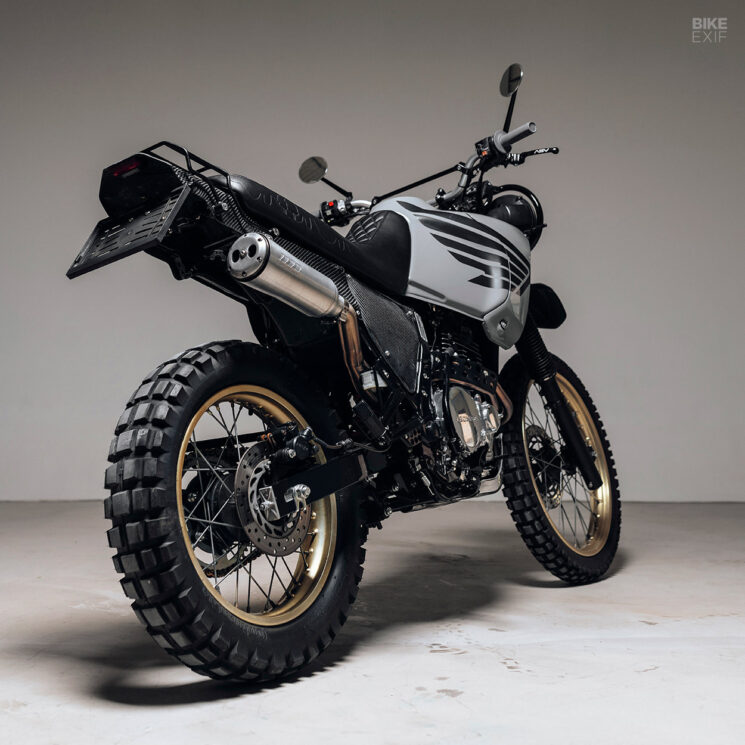