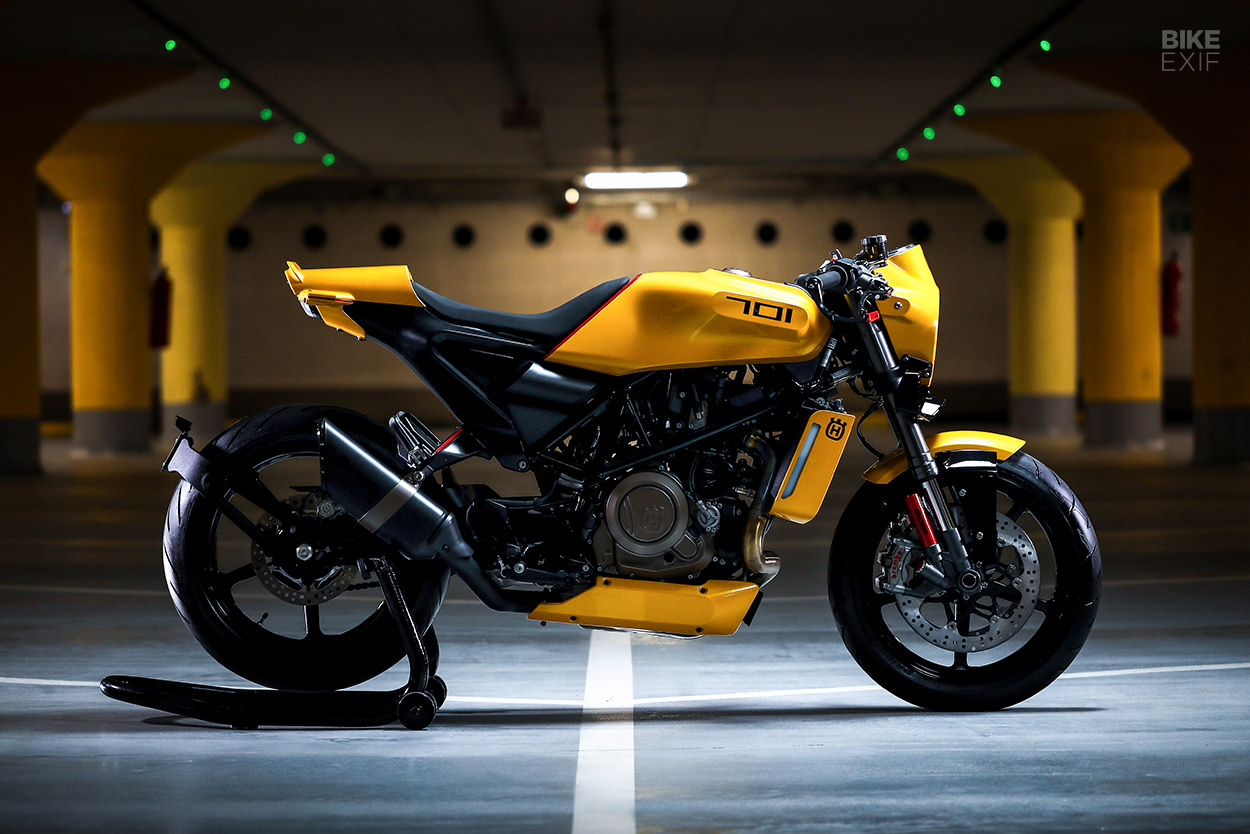 If you want a fast and agile bike for blasting around tight city streets or swooping country roads, you can’t go wrong with a machine powered by KTM’s ‘LC4’ single-cylinder engine. That includes not only the 690 Duke, but also the Vitpilen and Svartpilen 701s from KTM sister company Husqvarna.

The Kiska-designed Huskies have a small but passionate following. They weigh less than 160 kg (350 pounds) dry, have a lusty 75 hp on tap, and are blessed with pinpoint handling. I’m a fan, and when it came to shelling out my cash on a bike, put a Svartpilen 701 in my garage. 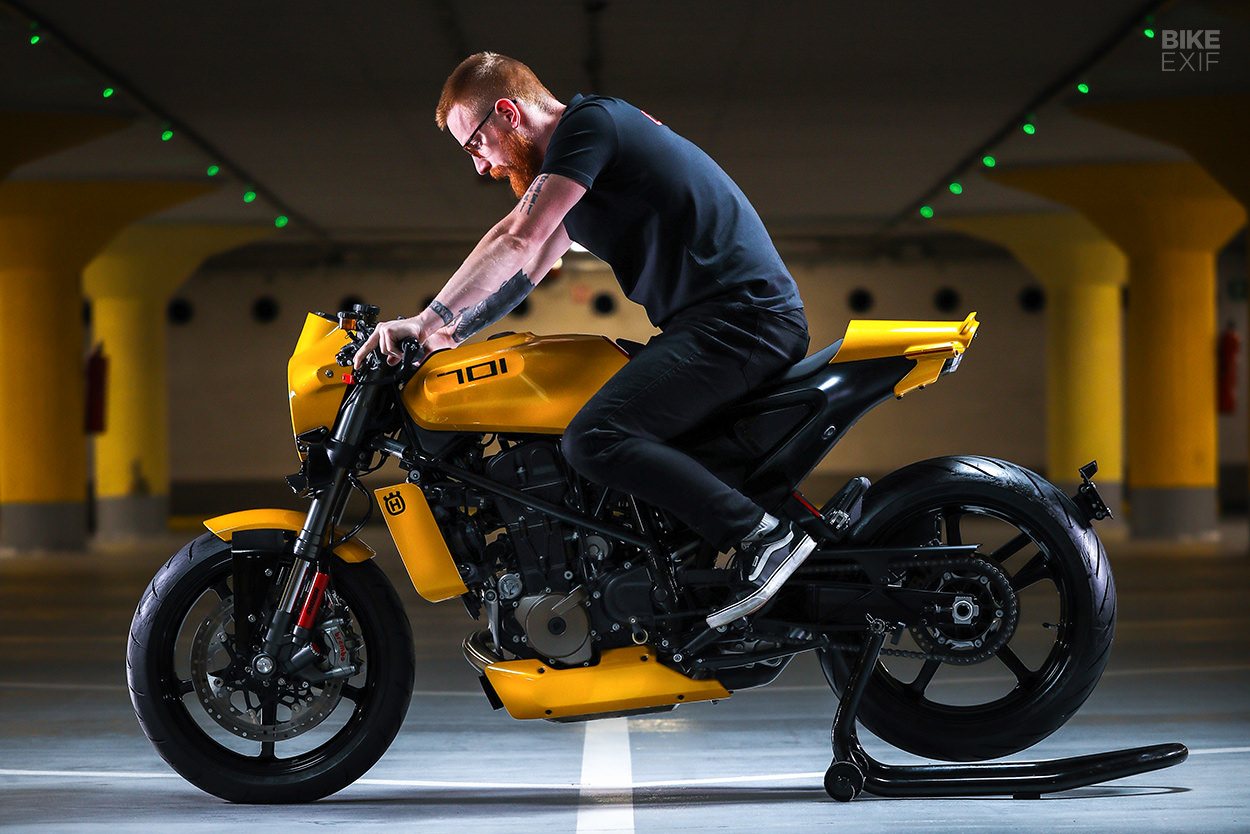 Žiga Petek, the man behind the Slovenian workshop Gas&Retro, is also a fan of the middleweight Huskies. He’s just finished this custom Vitpilen 701, which makes him one of the few people who dare to mess with Kiska’s design.

“I bought this bike from local dealer MotoxGeneration for my girlfriend,” Žiga tells us. “She’d sold the Sportster I built for her, because we were building a house. Then she wanted something to ride to her job, and I saw the potential in the Husqvarna.” 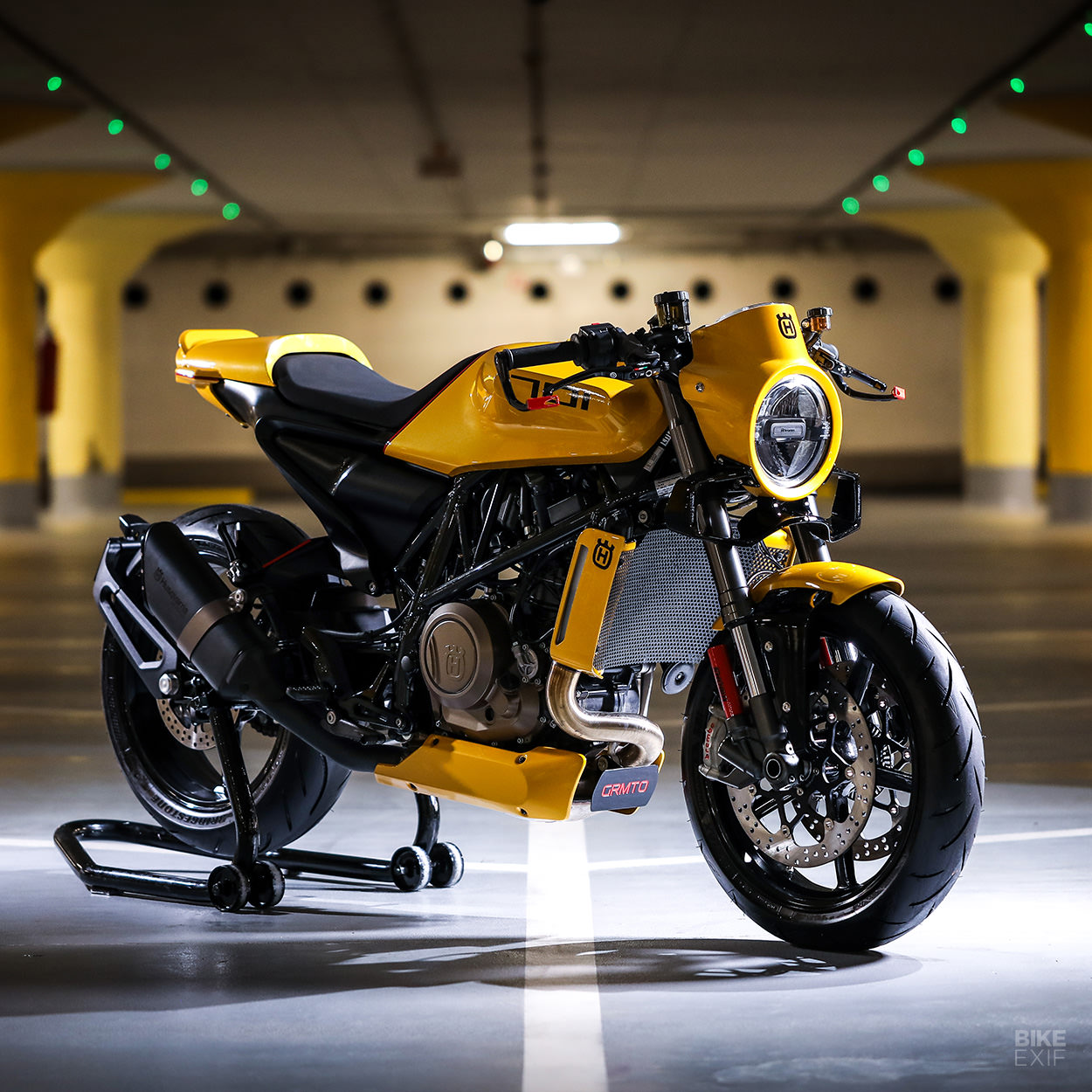 Žiga has given the Vitpilen (‘’White Arrow’ in Swedish) an even sportier vibe, and the finish is factory-level good. It looks like the work of a well-established shop, but Žiga has only been operating as a professional builder for two years.

He’s been messing around with bikes for 11 years though, inspired by his grandfather. “Ever since I left high school, I wanted to do something that makes others happy and is handcrafted,” he says. “And I love motorcycles, so it wasn’t hard to decide what to do.” 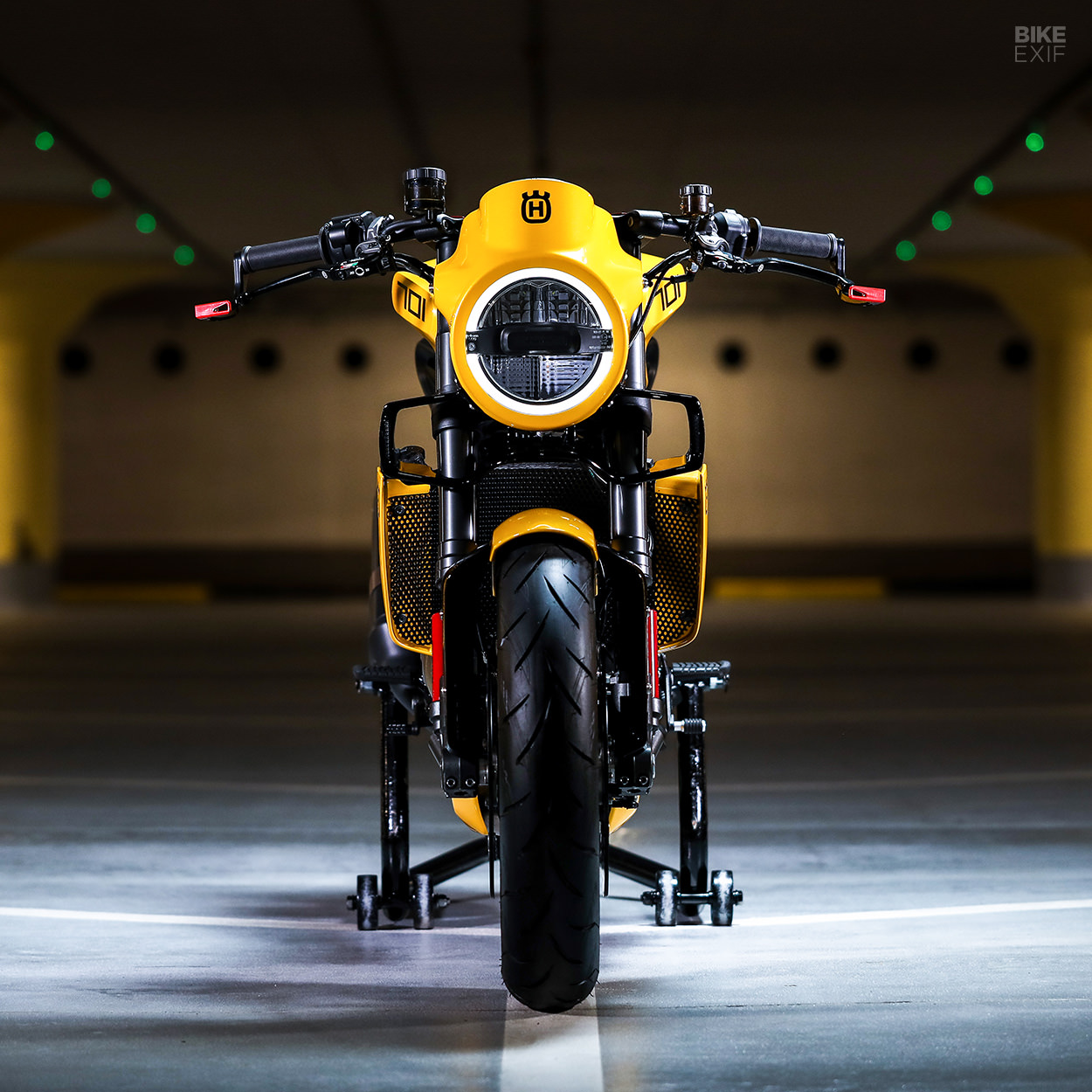 Gas&Retro is based in an old barn in the small country town of Notranje Gorice, but Žiga’s approach with this bike is very modern. He decided to give the Husqvarna a contemporary, racy style without losing streetability, or cutting into the frame.

It’s essentially a kit approach, and he’ll be able to replicate it for his customers—even the ones who want to do their own custom work. 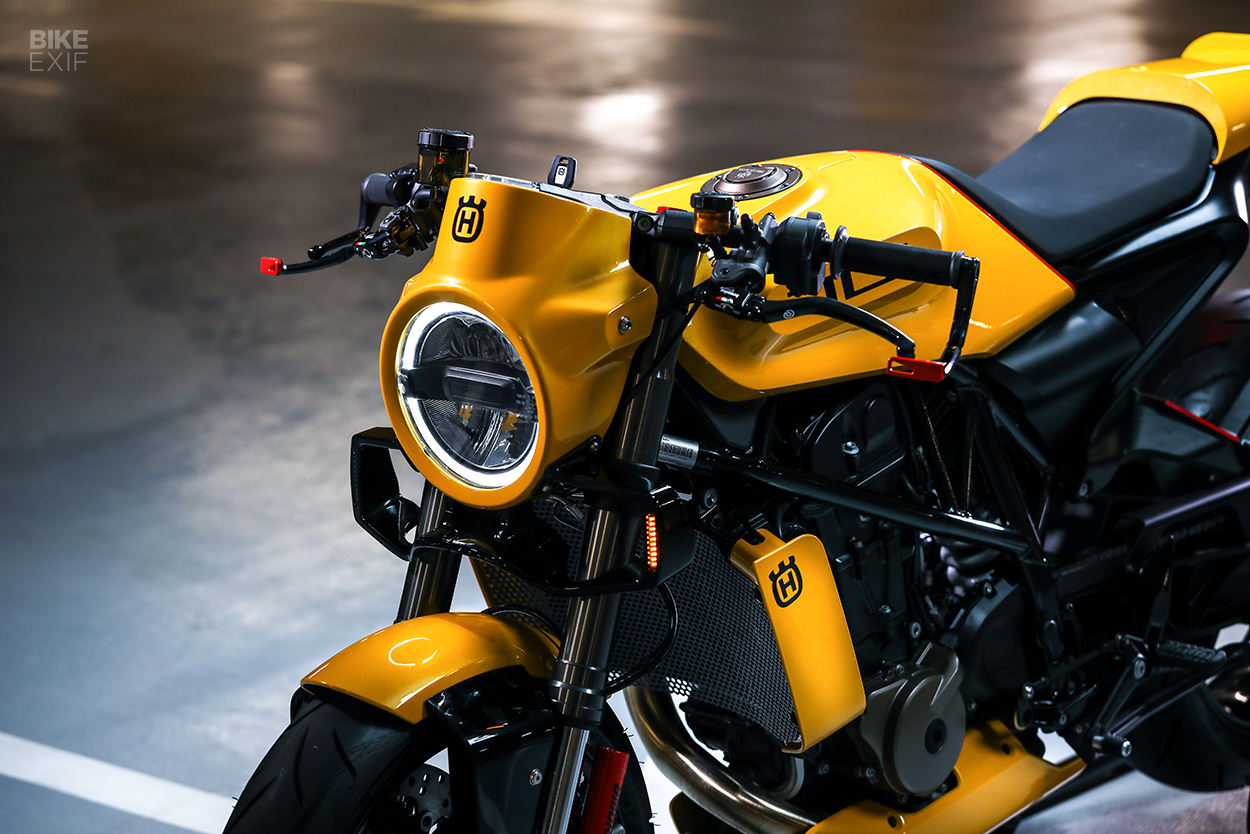 “All the parts are bolt-on,” he says. “Anybody can buy them from us, and mount them on their own bike without any problems.” That includes the new bodywork: a headlight mask, and the new seat and tail unit. Plus a set of very cool front and rear aluminum ‘wings’ with in-built turn signals.

Prototypes for the new bodywork were scanned in 3D on computer, with the finer details polished by Blaž Šuštaršič of ER Motorcycles. “We then did a few 3D prints and corrections to make everything fit perfectly,” says Žiga. A revised licence plate holder and titanium mesh for the muffler exit were added to the kit. 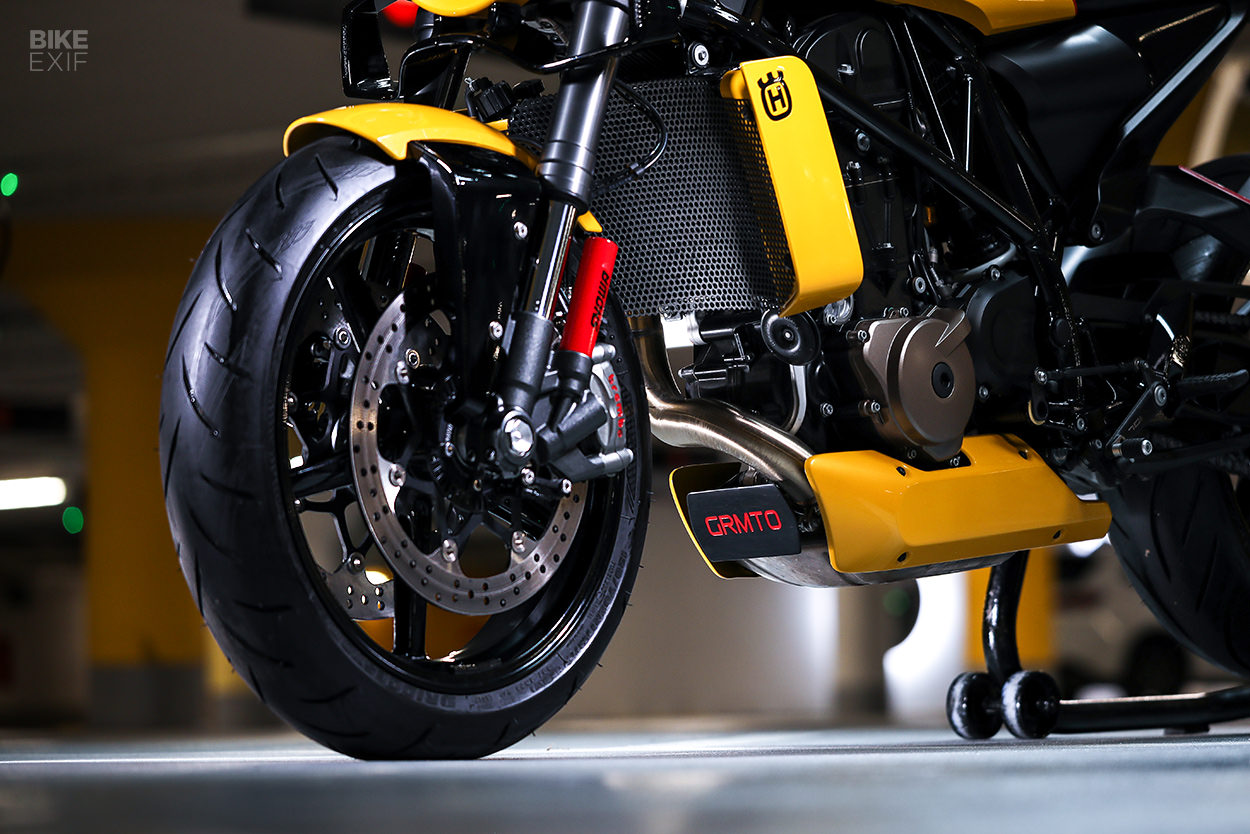 This build goes beyond just the bodywork though. The biggest change is to the suspension, with 43mm Showa BFF forks from a Kawasaki Ninja ZX-10R. And the twin disc brakes now feature Brembo M50 monoblocs.

Speaking from experience, the stock WP adjustable forks are pretty good once dialed in, and the single disc brake is way more than adequate. But Gas&Retro’s setup will be next level, especially since the bars are now graced with Brembo Corsa Corta levers and cylinders. 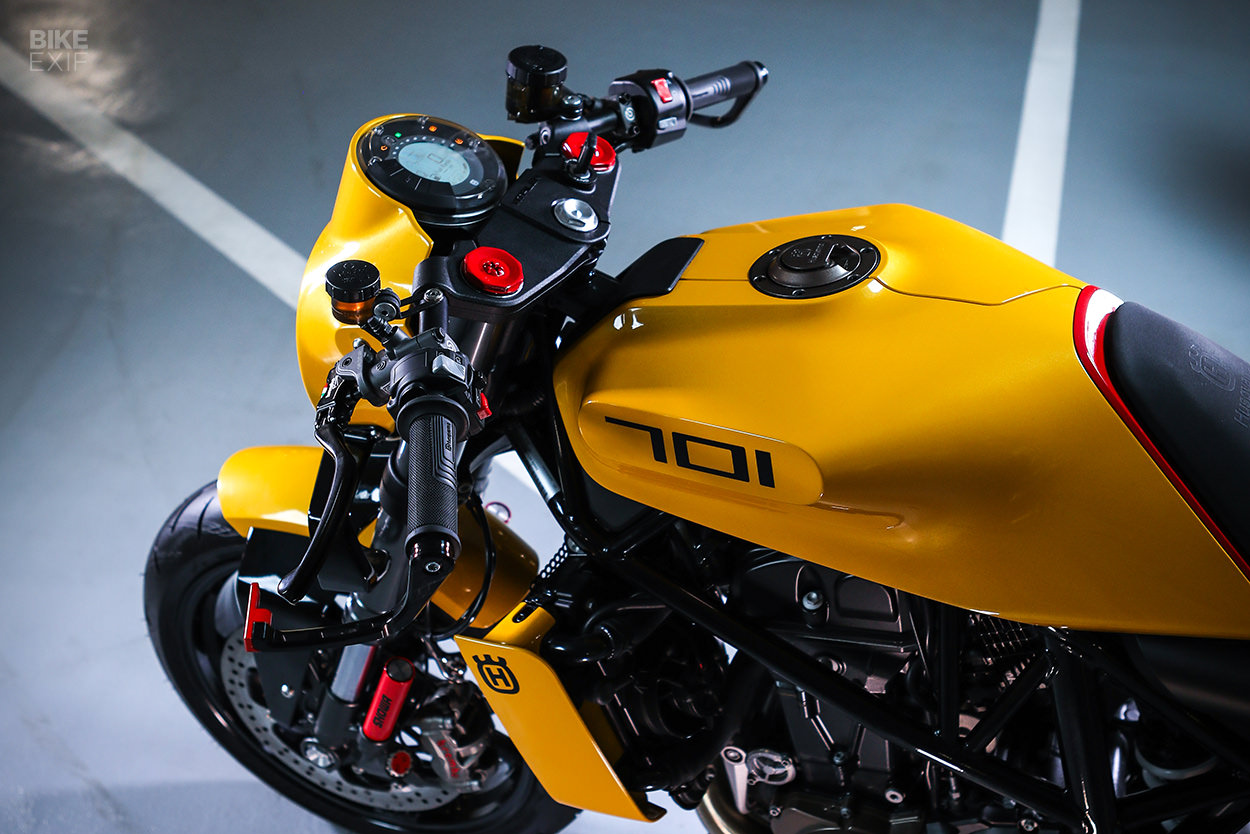 “The bike stopped ‘on the front wheel’ with the original brakes, so you can imagine how hot the stops are now! The feeling is amazing,” says Žiga.

Most of the other tweaks are subtle, and for protection—such as the CNC‘d mesh over the radiator, the lever guards, and a small plate at the front of the split belly pan that surrounds the exhaust headers. The exhaust muffler itself has been discreetly shortened by 100 mm. 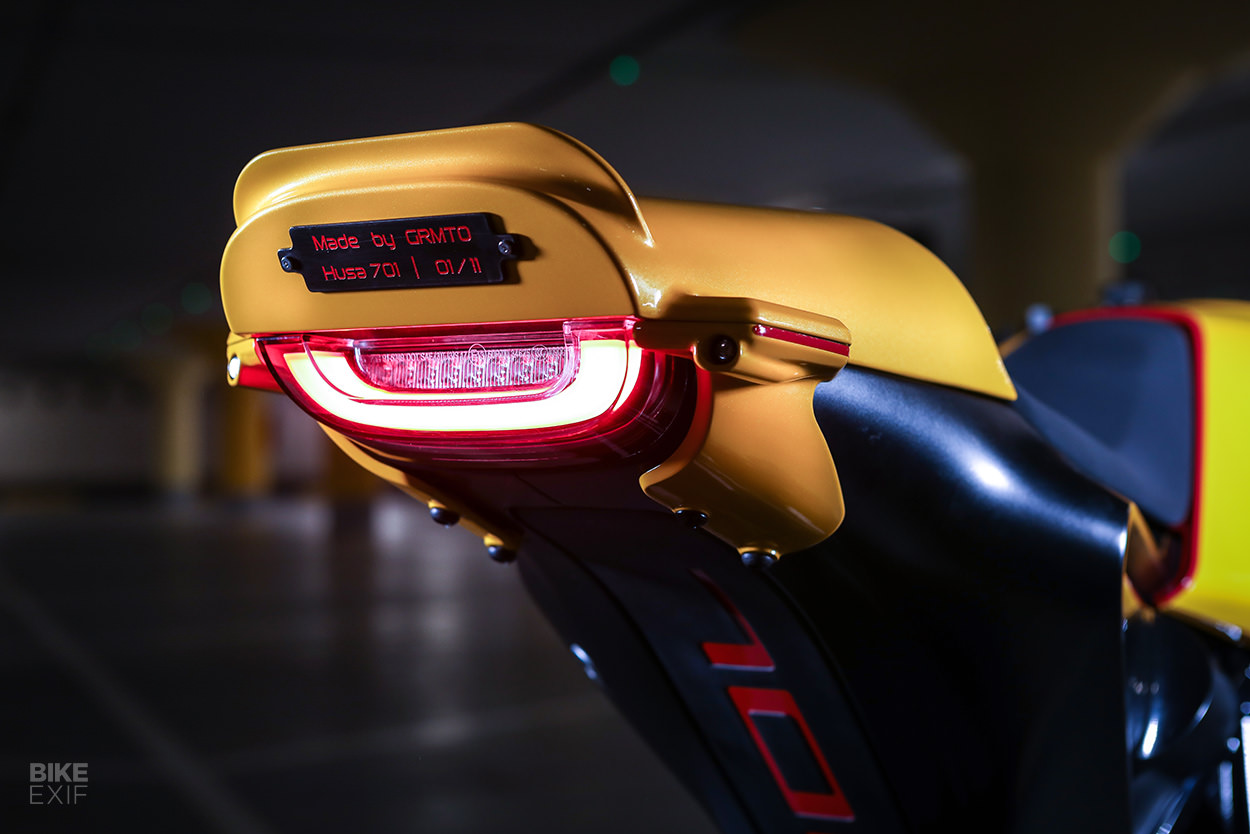 The first Vitpilens were painted white, and last year’s model was a rather fetching metallic blue/white combo. But Žiga has gone for a completely different look, with a piercing metallic yellow. Laid down by regular collaborator Matej Mrzlikar, it’s punctuated by vibrant red highlights and we love it.

“The bike is just as I wanted it to be,” says Žiga. “Racy, a bit different, and with clean detailing.” 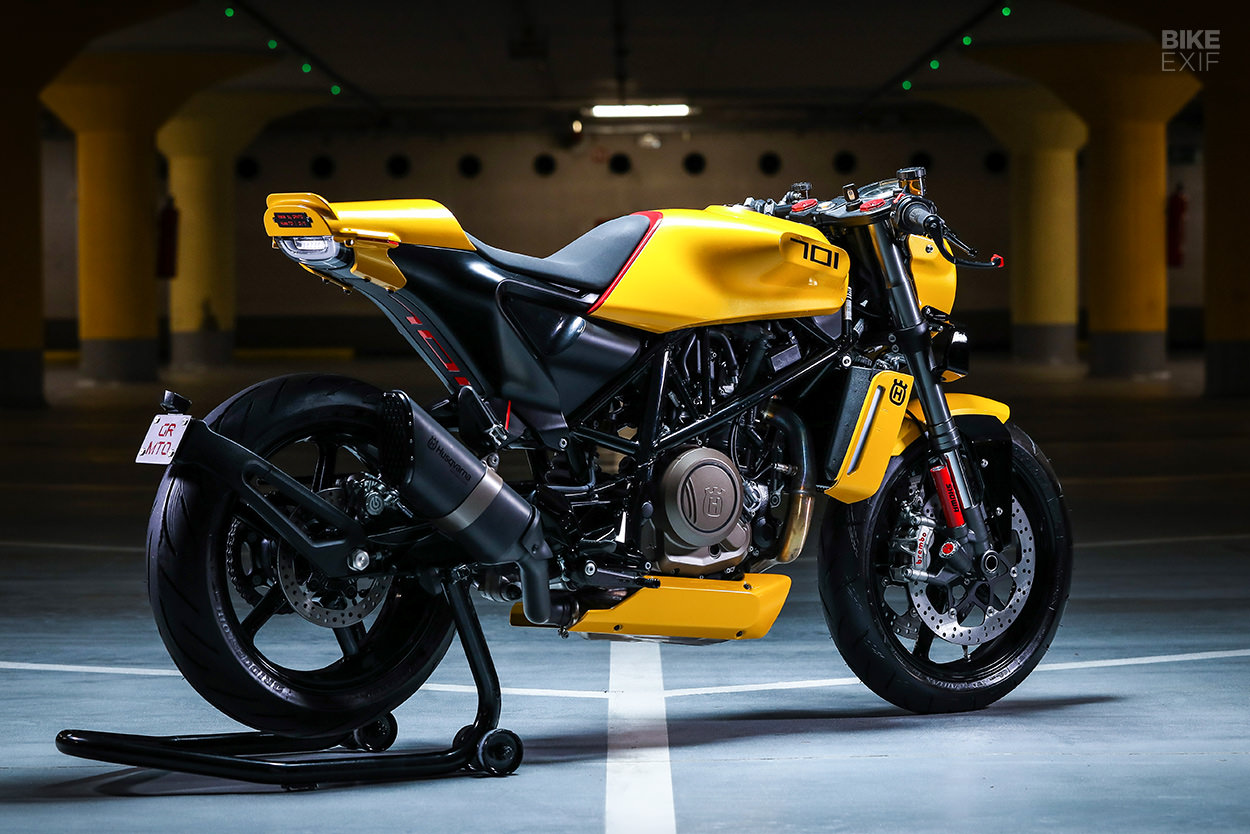 “The suspension and brakes look ‘big’ and fit perfect. I’d love to have it for myself or give it back to my girlfriend, but I think we will sell it. I already have something new in my head to build next…” 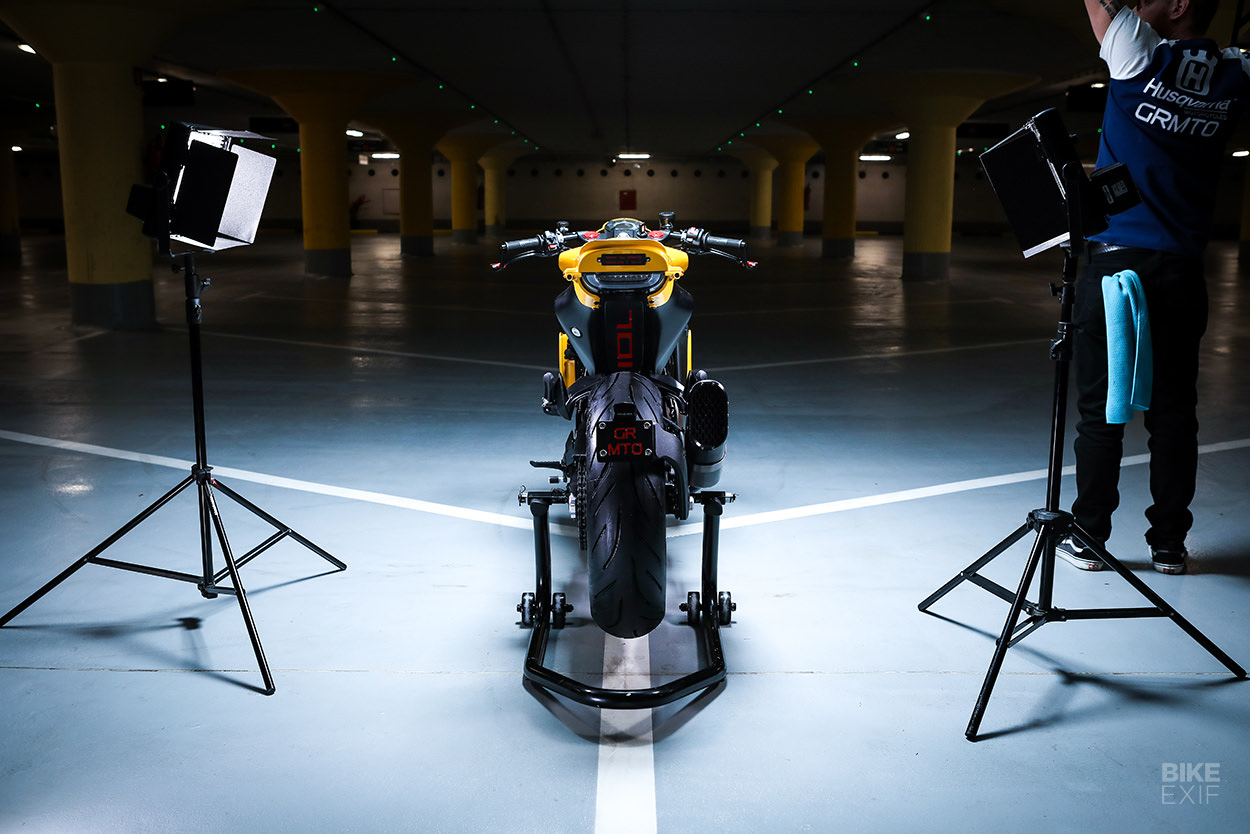