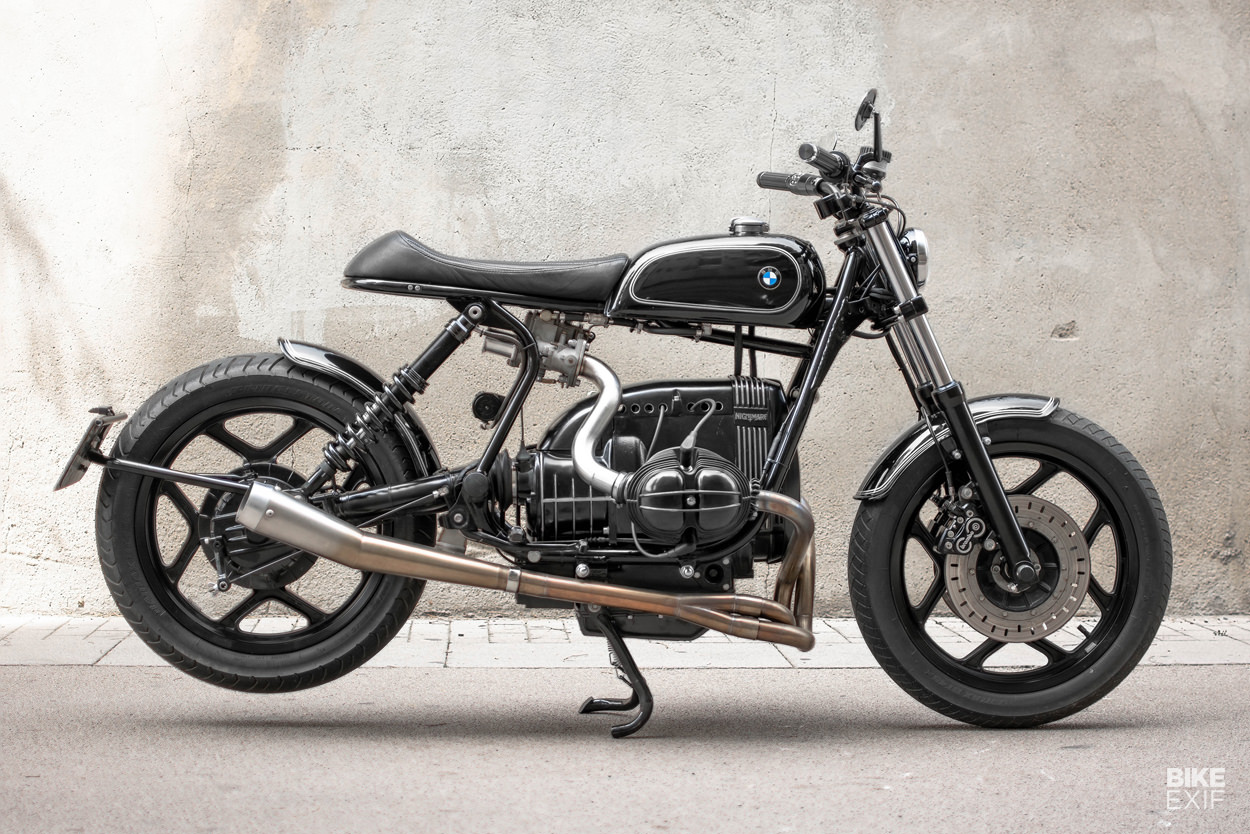 There’s a definite formula for BMW airhead customs. A few years ago, European workshops like Café Racer Dreams in Madrid figured out the recipe, and refined it over multiple builds.

But very occasionally the airhead formula is ditched. And this time it’s another Spanish workshop: Niks Motorcycles of Barcelona. This eye-catching R80 is called ‘Nightmare’ and discards the iconic BMW tank. Instead, the visual focus is on the engine, and the machine has an unusually light and airy design. 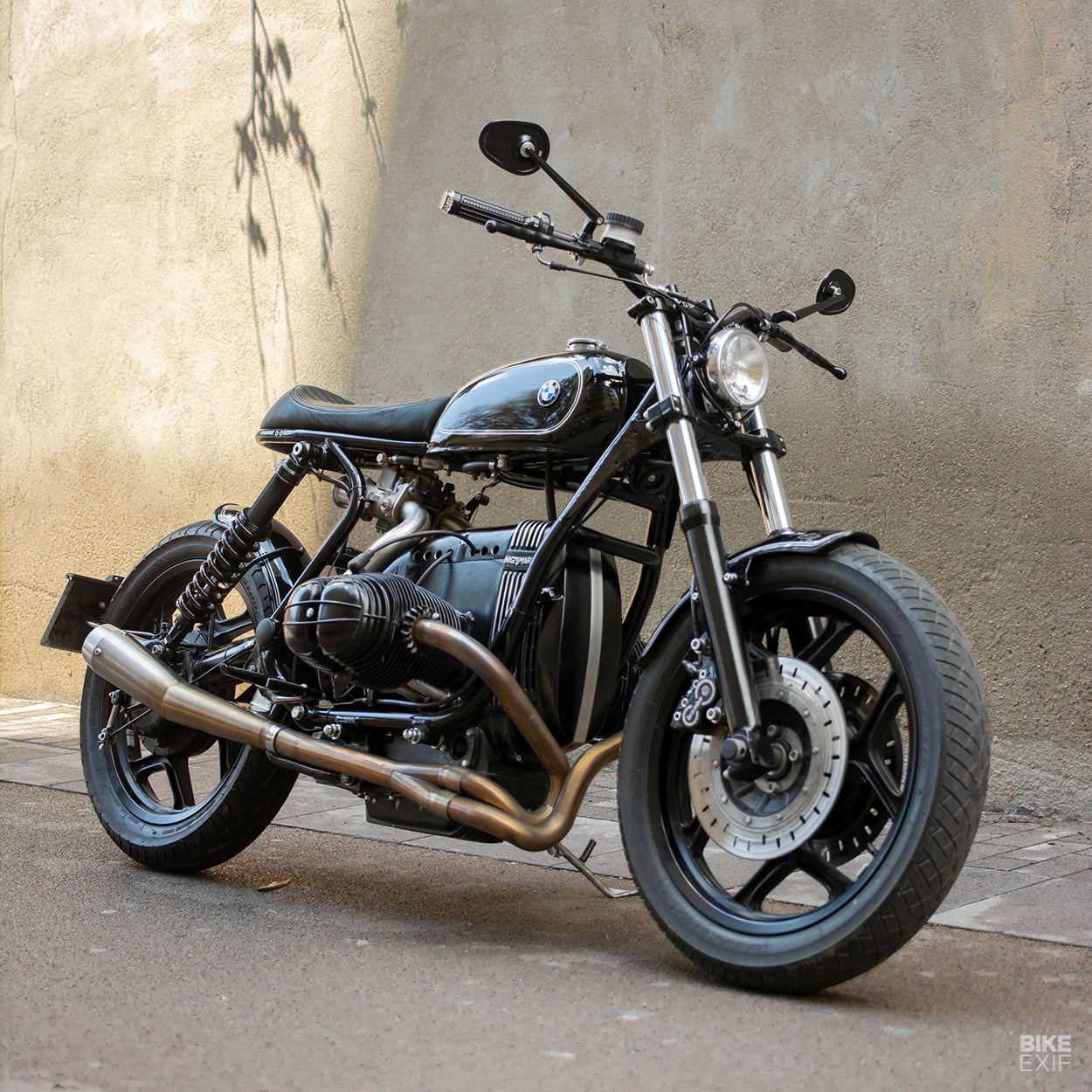 There are four members in the Niks team, including founder Nicos Marquès and Xavi, the owner of this BMW. The quartet got together in 2005 to build customs for their own enjoyment, and after refining their day-job skills in industrial design, mechanics and metalworking, went public in 2015.

Since Xavi is the owner of this R80, budget constraints did not apply—and there was complete creative freedom. According to Xavi, the crew concentrated on “the aesthetic lines of the motorcycle, and making the engine shine—the essential character of this project.” 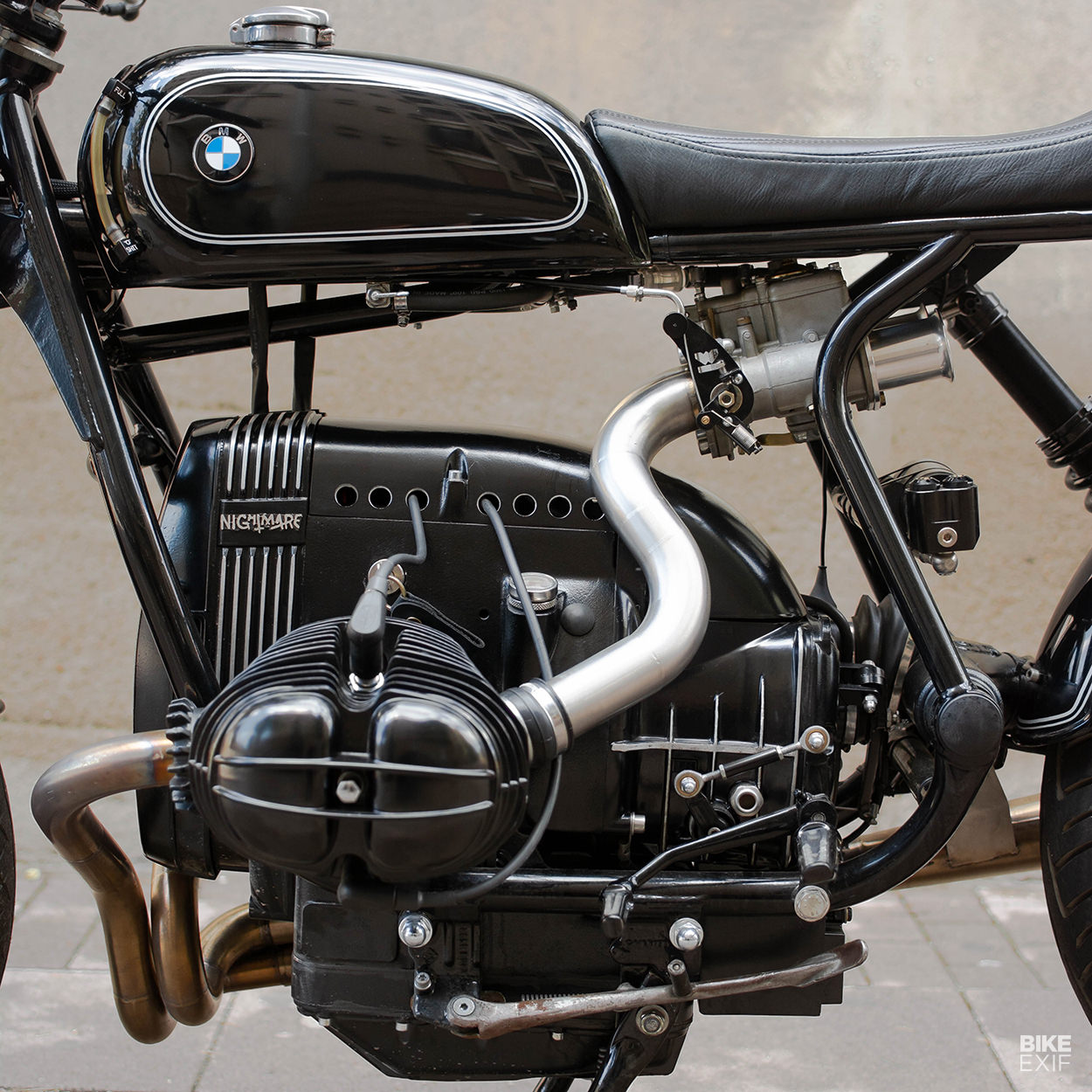 It’s a striking look, and one that got our attention straight away. It’s obviously not a bike for long-distance touring, but it’s muy elegante.

“One of the main ideas was to keep the BMW very narrow from the top view, and give it a clean line from the side,” Xavi says. “That way, when you’re riding the bike, you get the feeling that you are ‘riding on the engine’.” 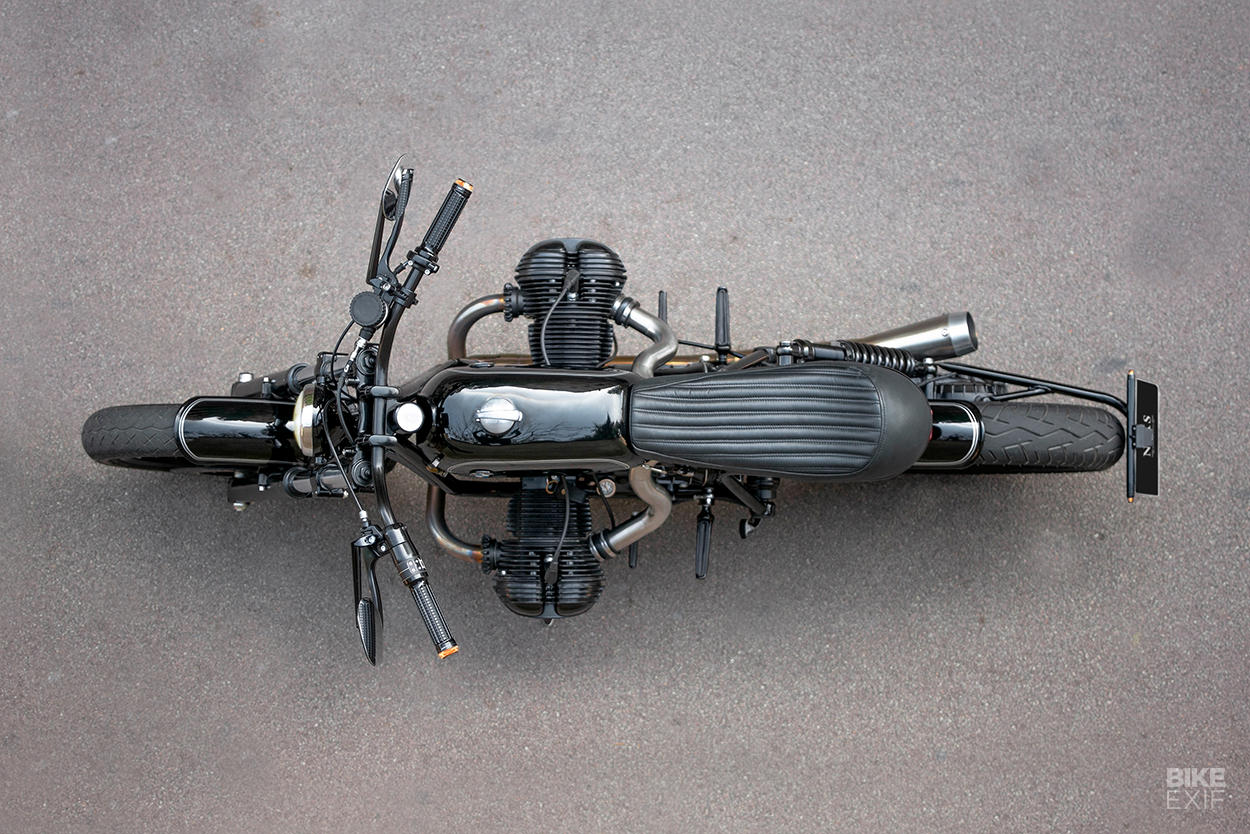 The boxer motor has received a ton of attention. After a complete rebuild, with new crankshaft bearings, rods and rockers, Niks upgraded it to 1000cc using new cylinders and high compression pistons.

Each cylinder head has also been refurbished, with intake ports polished, and machined to fit a second spark plug for better combustion. To make the twin-spark setup work, a pair of double Silent Hektiks has replaced the stock coils. And the alternator and ignition system duties are now handled by a Silent Hektik LiMa 410—a three-phase 410W alternator and digital ignition kit. 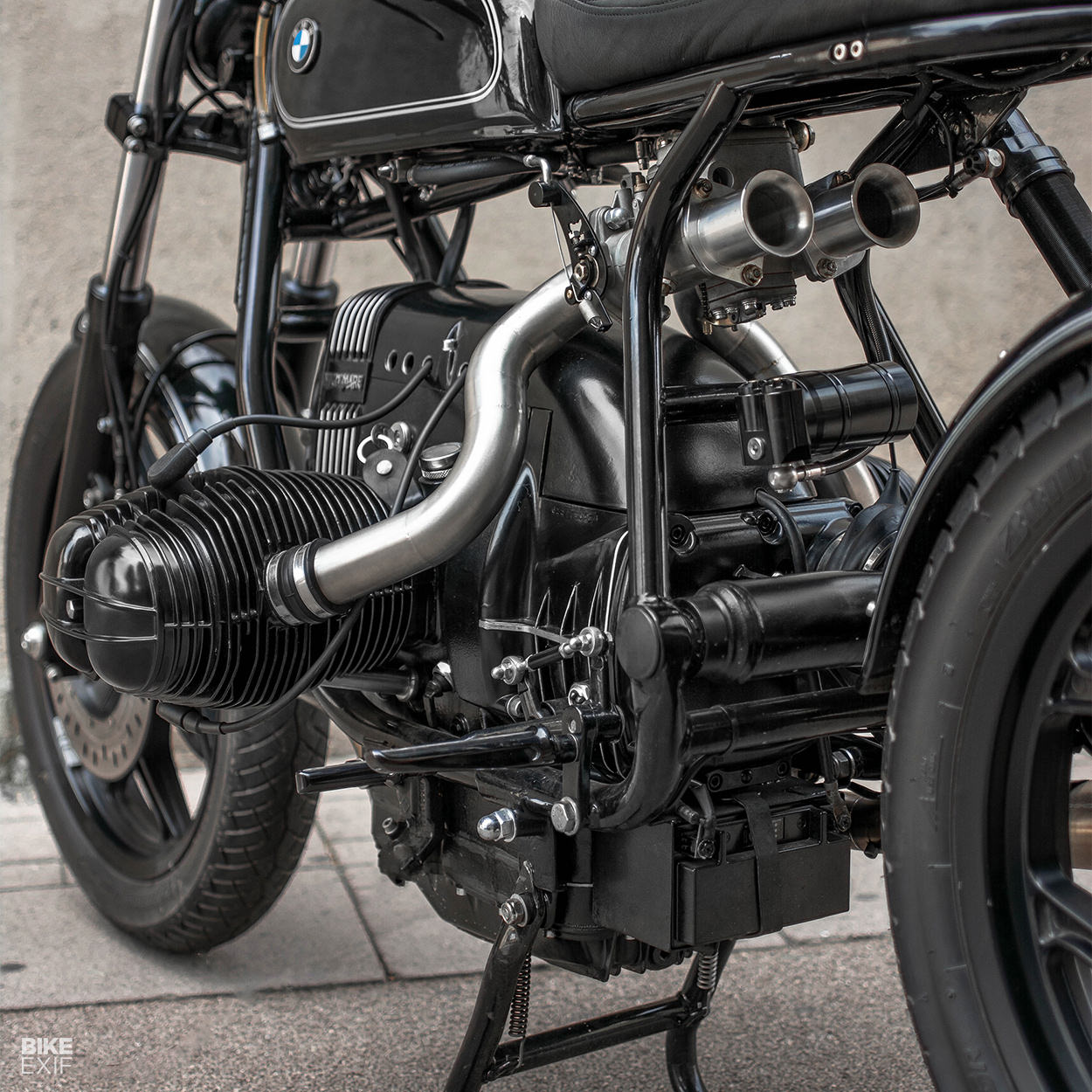 Juice comes from a Skyrich lithium battery, which hides under the (completely rebuilt) gearbox.

The strangest part of the engine setup is the carburetion: The standard Bing carbs have been replaced by a twin Weber carb from a car. “That wasn’t easy to tune up, but thanks to the help from Voodoo Garage—who have done this before—the process was smoother than it could have been,” says Xavi. 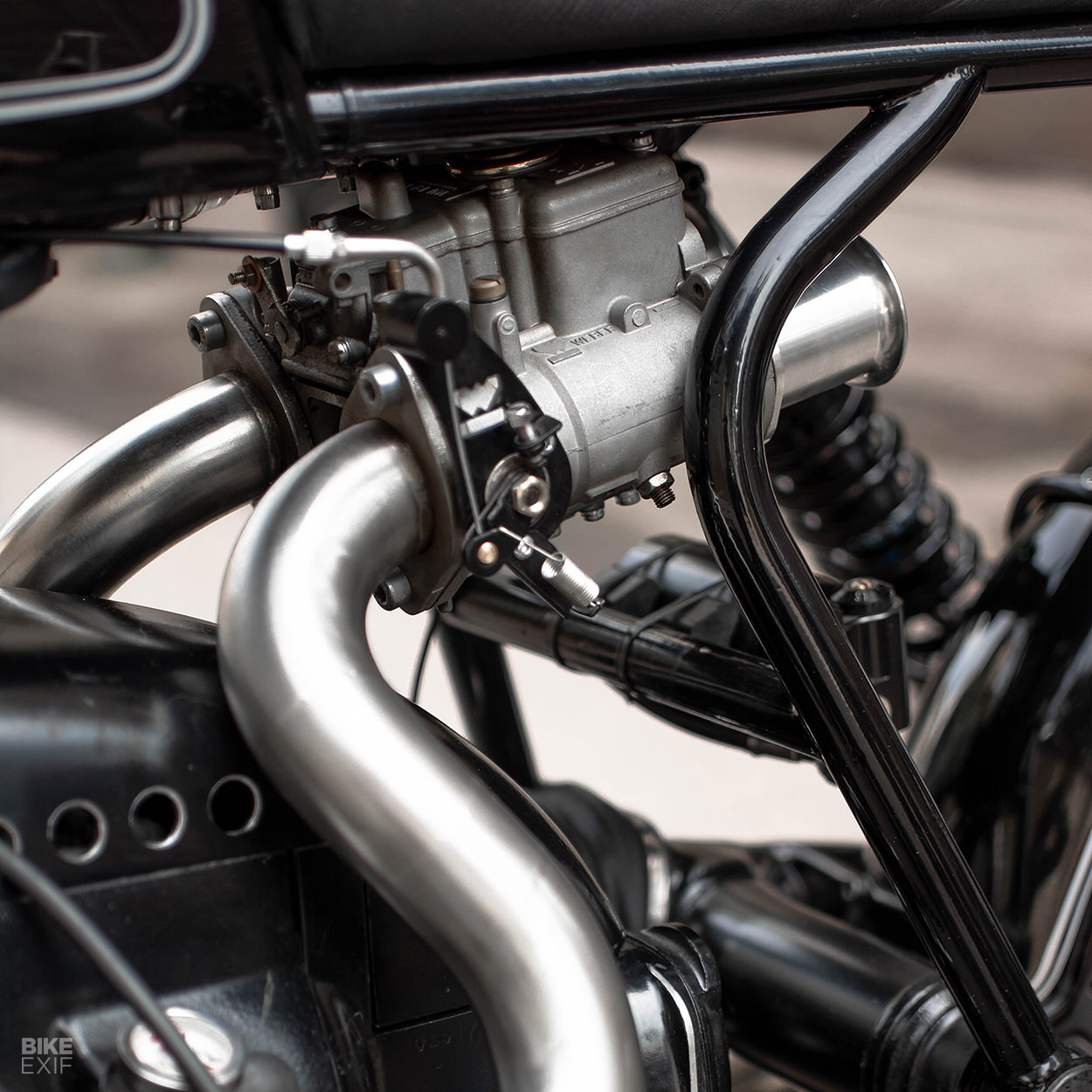 We can’t imagine how difficult it must have been to get the Weber working, but it looks good with the air intakes under the seat and adds to the minimalist vibe.

The long and curvaceous intake manifolds look like an extension of the exhaust, and the piping at both intake and exhaust ends is beautifully fabricated. It’s the work of Barcelona local Christoffer Mårtensson. 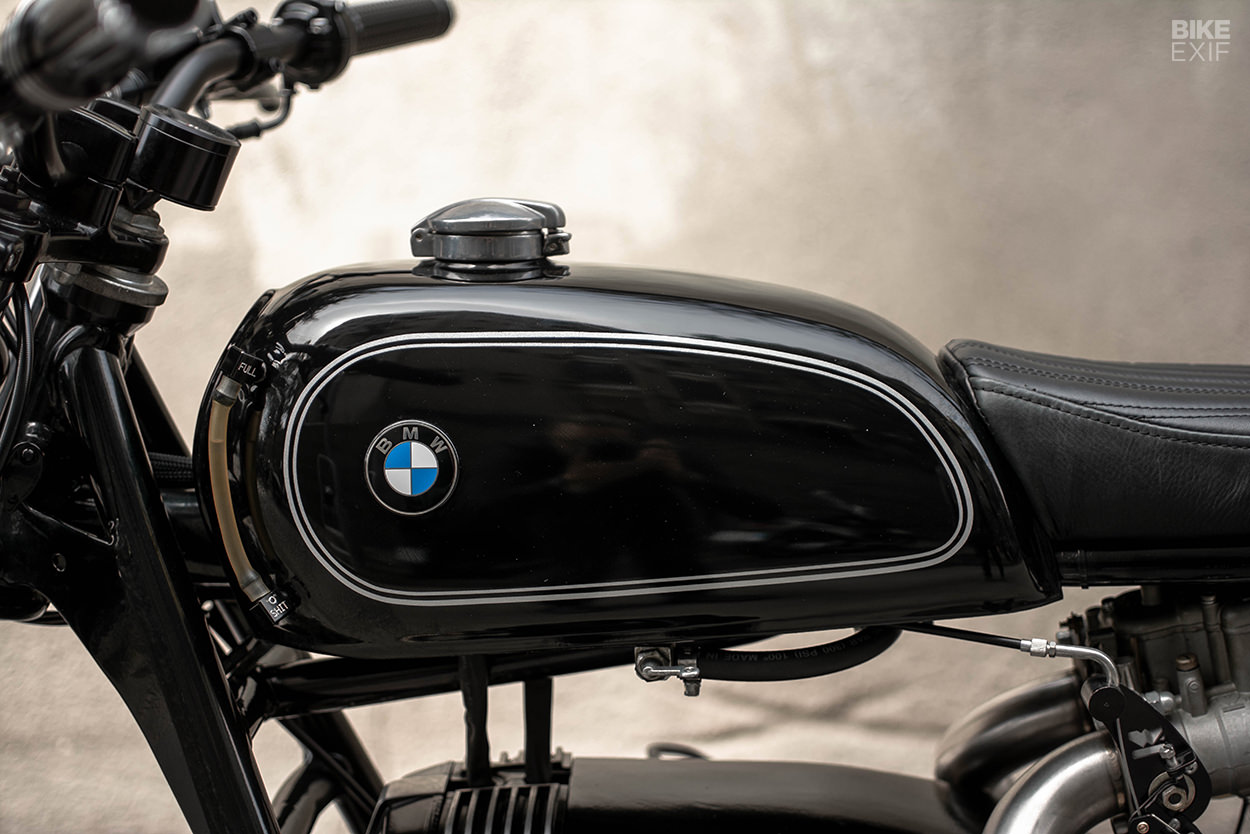 It’s the tank that eyes will be drawn to first, though. “We managed to find an old Honda tank that fits perfectly with the width of the BMW crankcase—very small and narrow,” says Xavi.

The tank was modified to fit the frame, and the front section of the tank ‘tunnel’ was boxed off to house the electronics—including a Motogadget m.unit control box. The gas cap has been replaced by a classic Monza type, and there’s a fuel level tube on the left side of the tank. 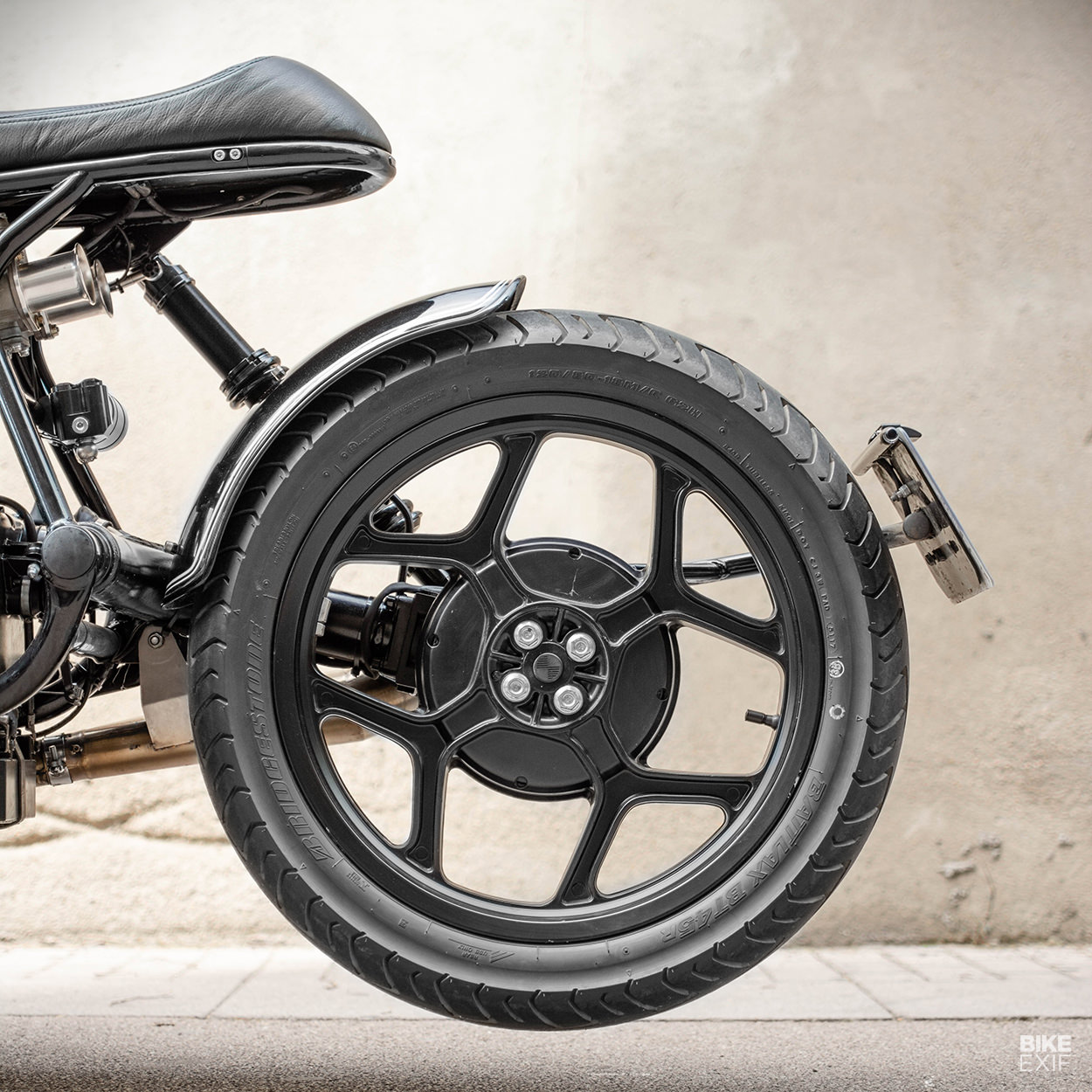 The top and back sections of the frame are new. “The original subframe bolts on the frame, but it’s now a one-piece,” says Xavi, “with the exception of the back loop, which can be removed via four hidden screws. A new TFX Suspension shock is bolted into a new mount and is longer than stock, to raise the ‘floating’ top line. And there’s a simple but classy new seat, again built by Christoffer Mårtensson.

The front suspension gets an upgrade too, with beefier forks (and yokes) from a BMW R100R. They’ve been shortened to improve the stance of the bike, with progressive springs inside and new fork caps with a useful preload adjustment. The R100R brake calipers have come along for the ride too, hooked up to a Brembo master cylinder with a round integrated reservoir: “Like the ones on old Ducatis—it gives you more feeling.” 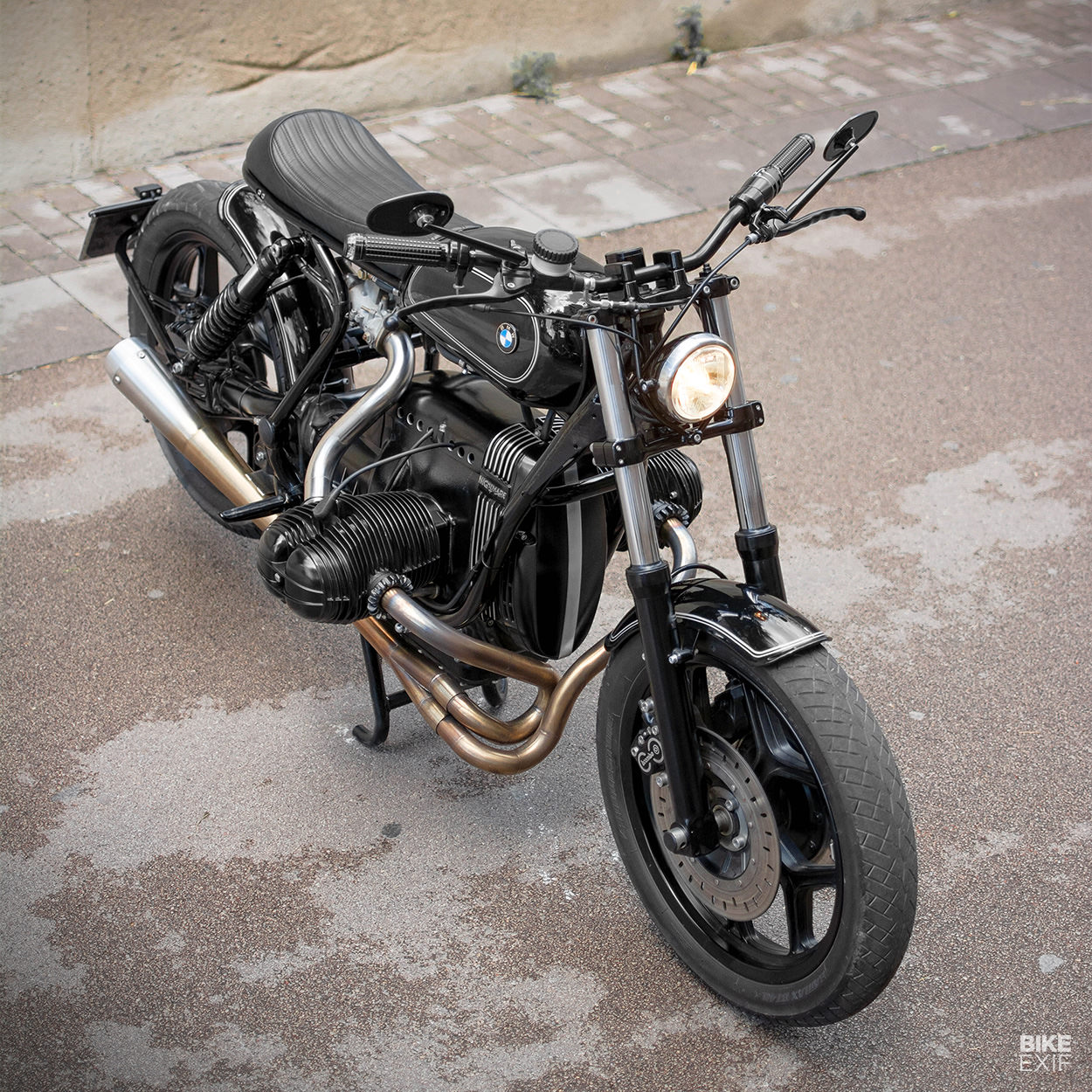 “We were looking for a comfortable riding position, so we went for LSL’s 22mm ‘Comfort’ black bar,” says Xavi. “And since we love Motogadget components, we chose their bar end indicators, machined aluminum grips, mini switches and a Motogadget Tiny speedo that is on top of the steering nut.” The cables are now routed through the bars for a clean look.

Motogadget ended up sponsoring this project, and also provided a pair of their revolutionary ‘glassless’ mirrors with polished aluminum lenses to complete the front end. 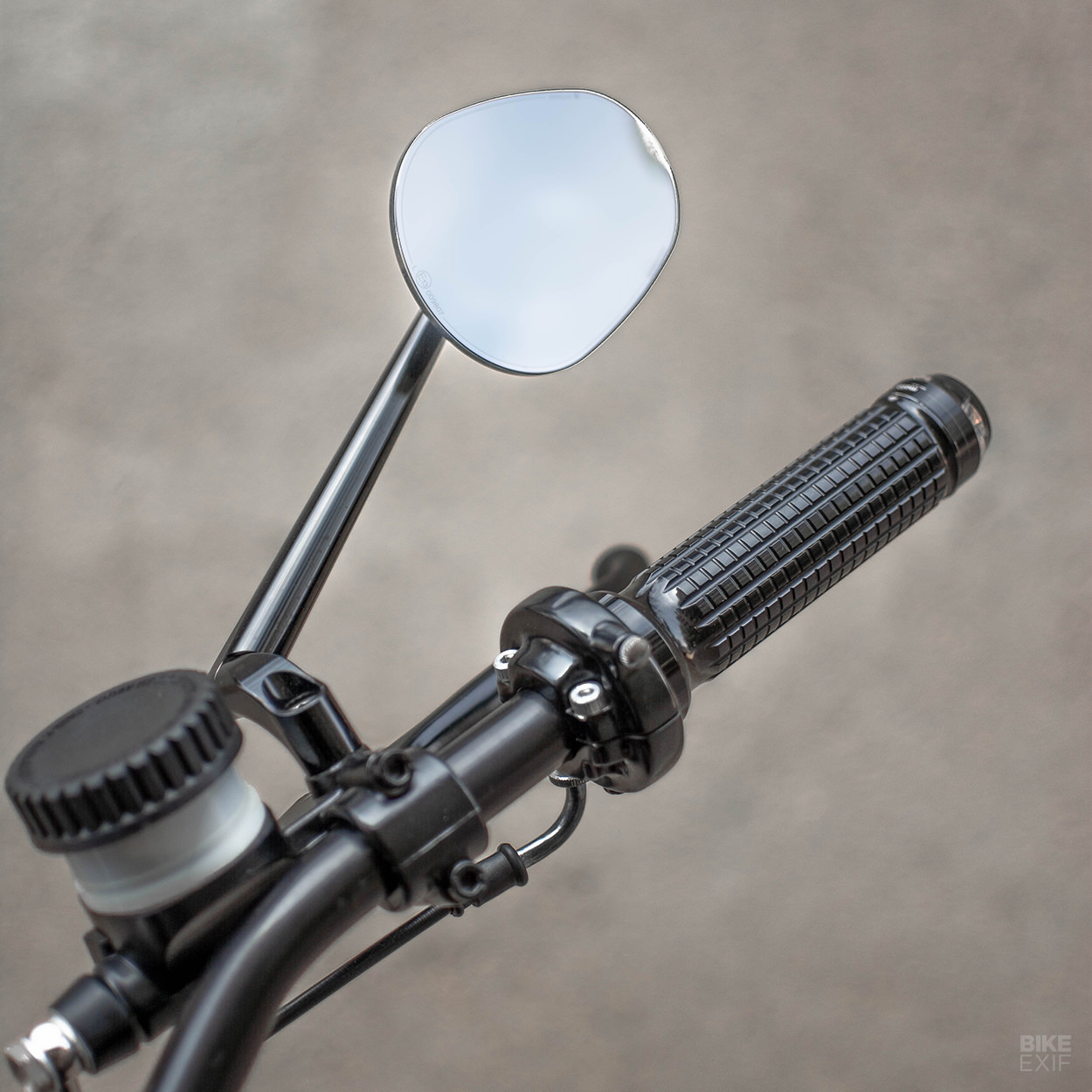 All that was left to fit was a tiny but powerful headlight, bolted onto a custom bracket fabricated by Stefan from Kooltcreations, plus new steel fenders. Then the R80 went off for paint, with a classic all-black scheme applied by local Barcelona whizzkid Edgar at TJA Creates.

We’ll always have time for the classic custom airhead look, but it’s also time we had a change. Top marks to Niks for trying out something new—and pulling it off in style. 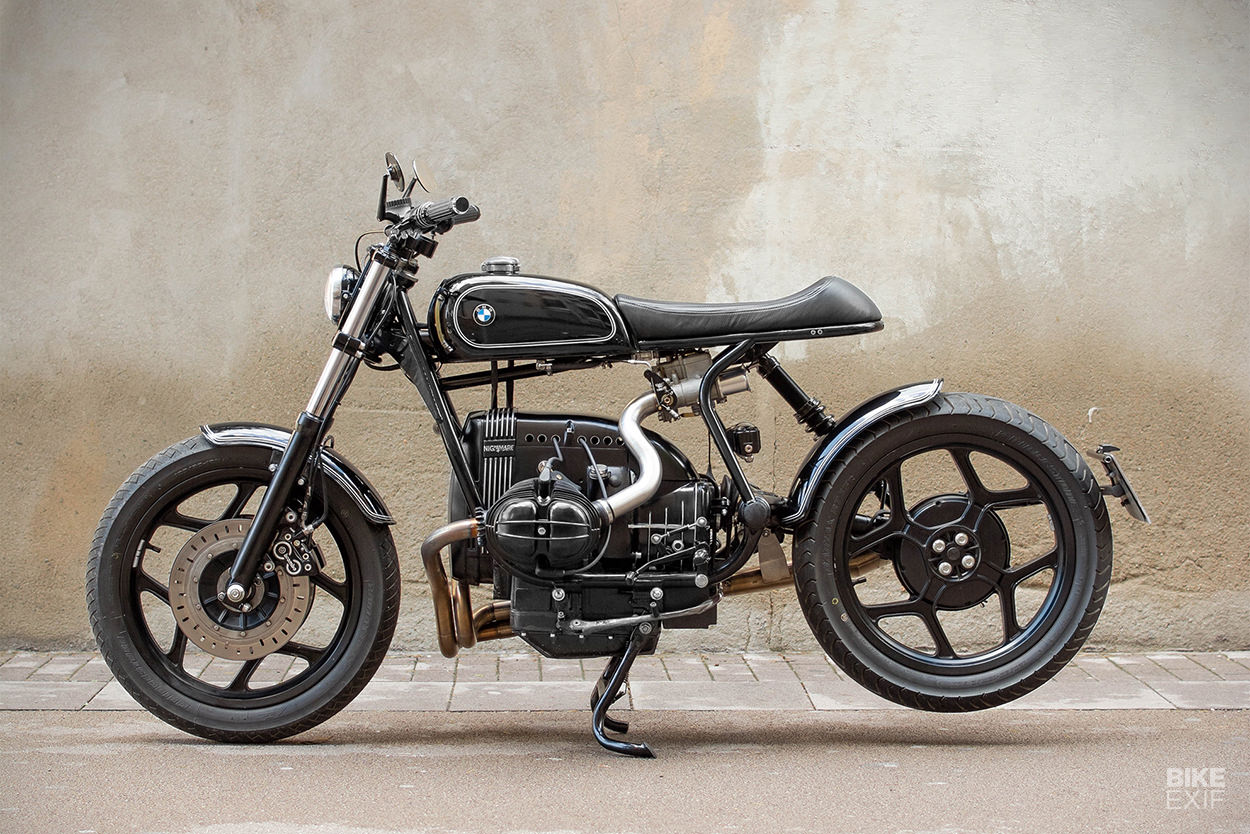