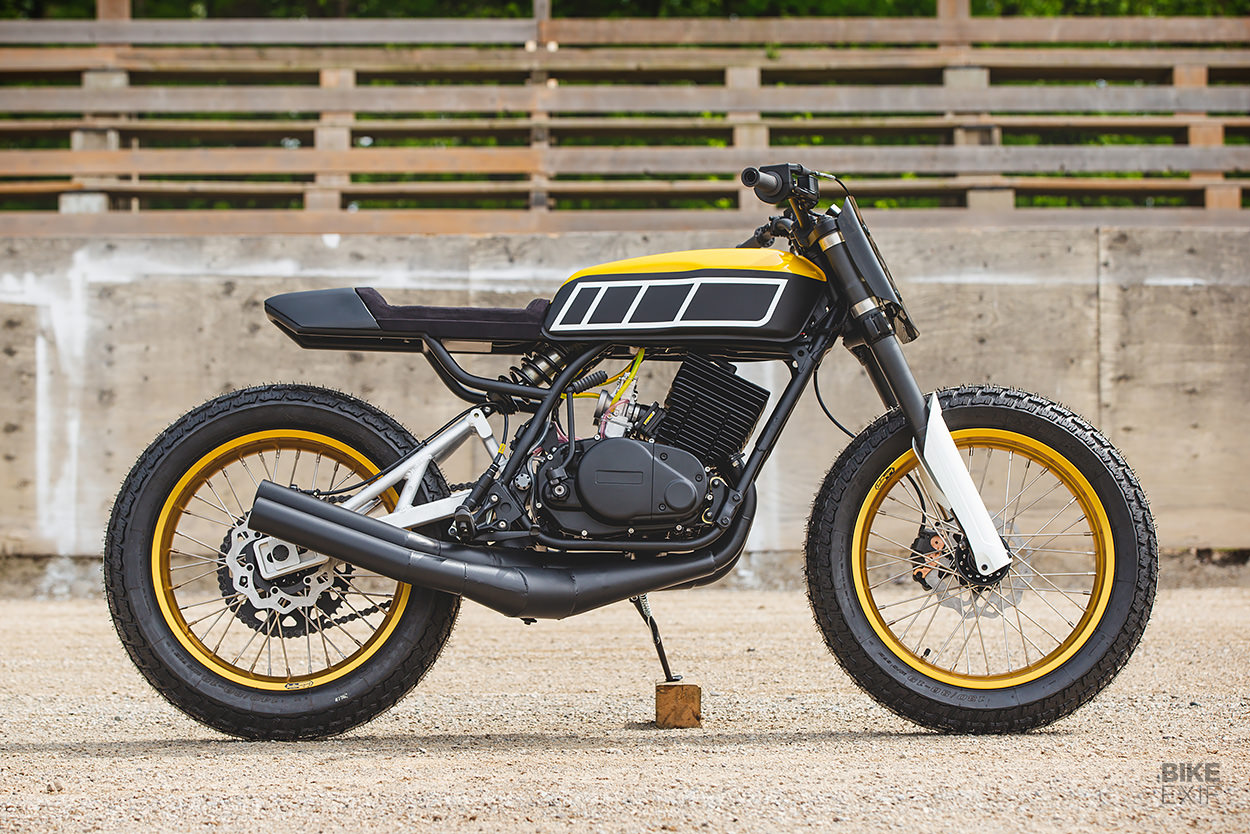 Nothing screams “it’s the weekend” quite like a two-stroke street tracker. All the more if it’s a Yamaha RD400, and it’s dressed in a traditional black and yellow uniform—with speed blocks, of course.

This svelte little number, dubbed ‘427 Tracker,’ is the work of Smyth Innovations. Based in Ontario, Canada, the workshop is run by Cam Smyth—an industrial designer-turned-custom bike builder. He’s been at it full time for a decade already, and works with a network of friends and local businesses to get things done. 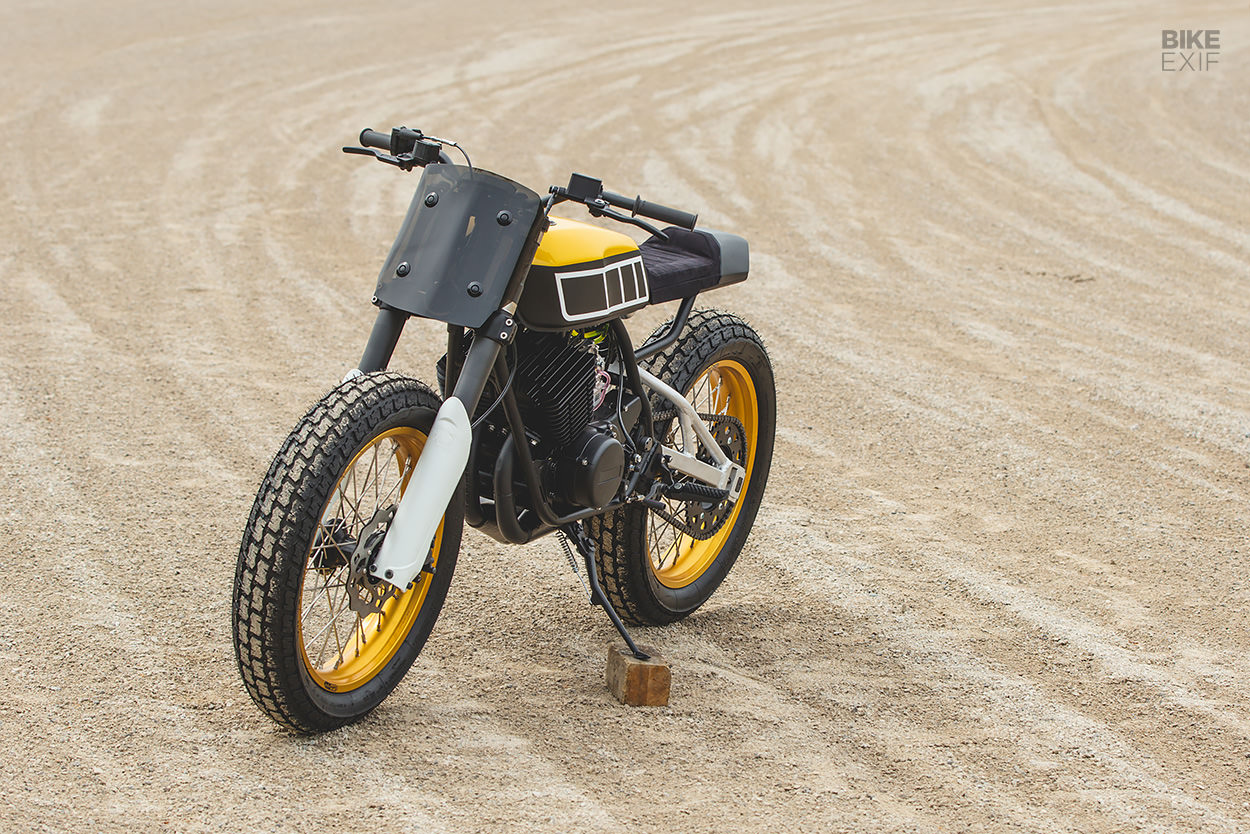 The 1976-model Yamaha RD400 made its way onto Cam’s bench along with three other RD400s of the same vintage. One client had bought all four donors, with a view to mixing and matching the best bits to build two complete bikes. One bike was to be a restoration job, while the other was to be a street tracker.

While working out the details of each, Cam caught wind of the Dream Build Off—an online custom contest organized by Roland Sands Design and Geico Motorcycle. He figured the street tracker RD would be the perfect candidate. 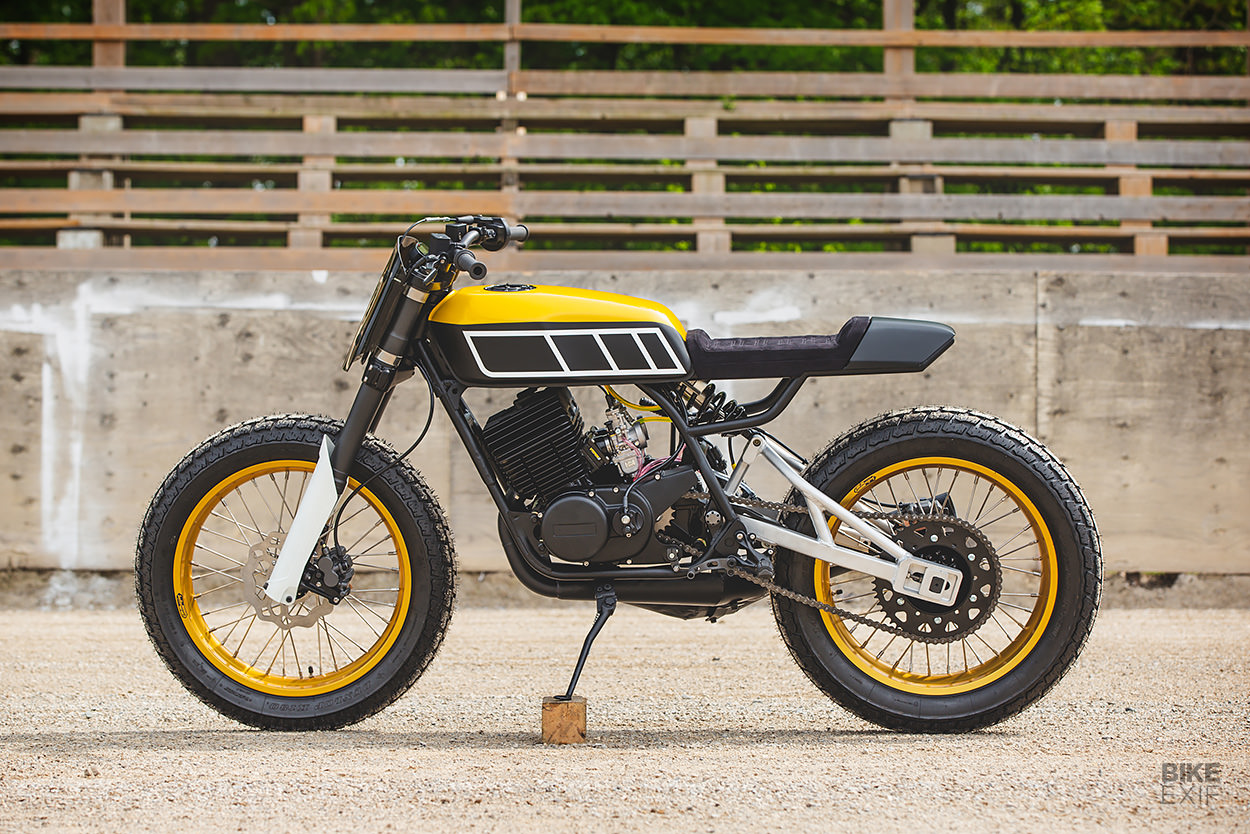 Cam and his crew had their work cut out for them though. The donor they picked as a starting point was very far from being roadworthy.

“It had a 1979 Daytona tank and a few other mismatched bits and backyard modifications done to it,” says Cam. “Everything needed to be replaced or rebuilt, right down to the engine. The pistons and cylinders were scored, the engine covers had kissed the asphalt once or twice, and the left engine case had lost a fight with a chain.” 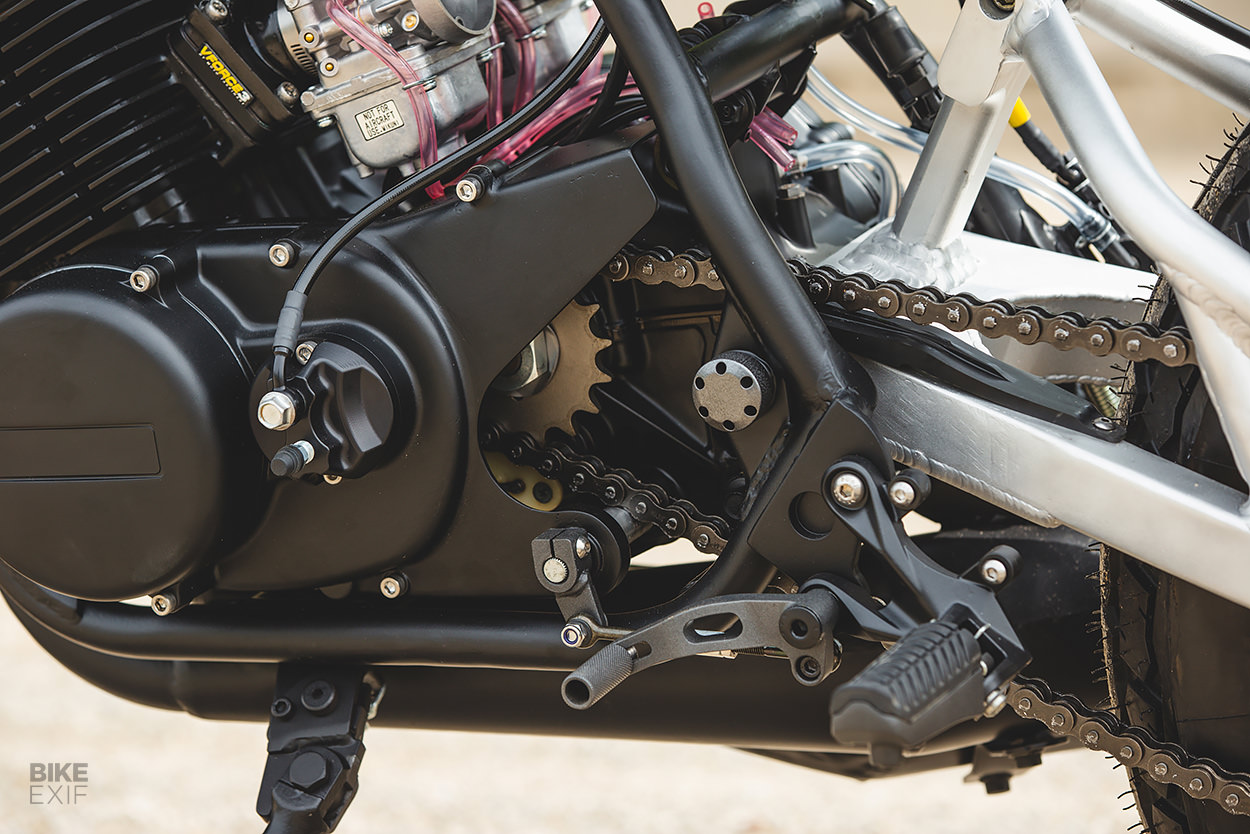 Once Cam had figured out a design direction, work could begin in earnest. The engine was stripped down to its bare cases, which were blasted, powder coated and reassembled with new seals and gaskets. Lurking inside are a new crank and pistons, bored-out cylinders and a few other go-fast mods.

On the outside you’ll find a set of radial fin performance heads from HVC Cycle, a hydraulic clutch and a modified front sprocket cover. The team even cleaned up some of the factory trimmings, and shaved off the cast writing on the cases. 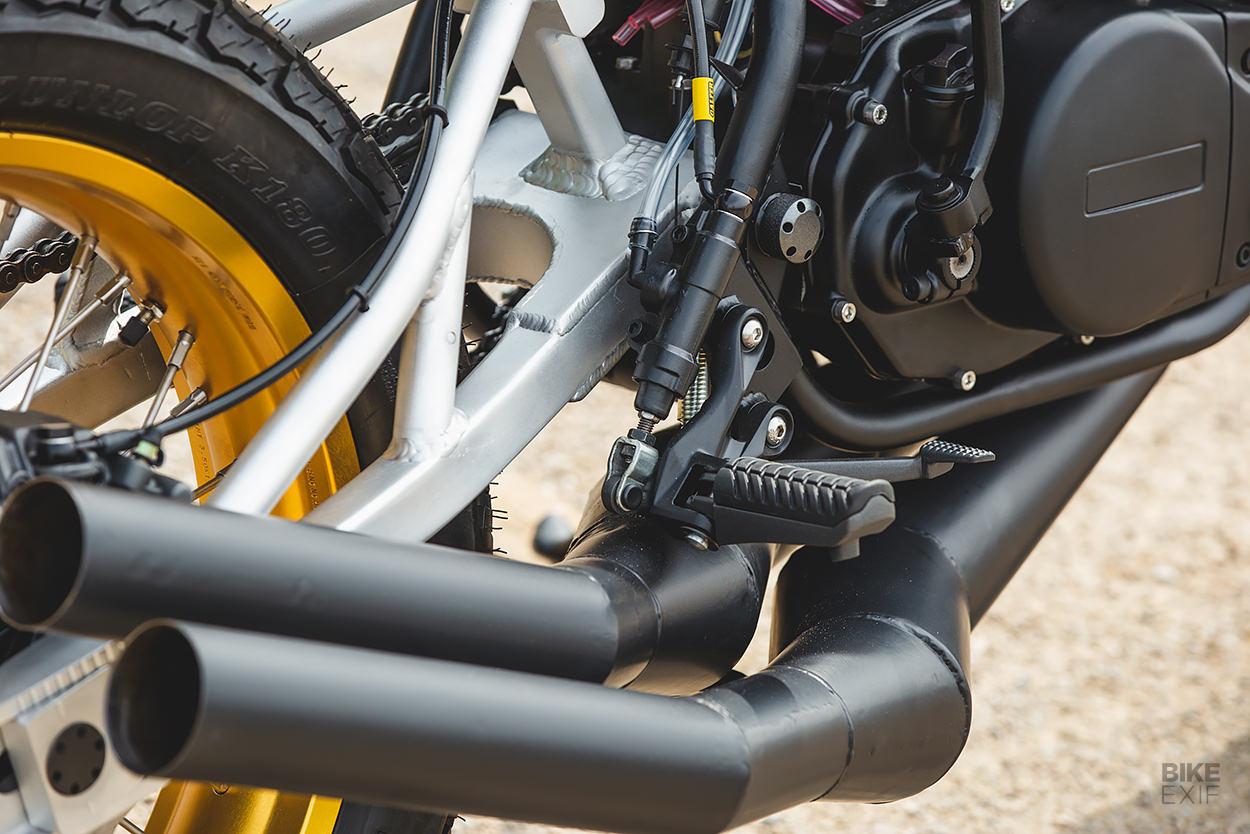 The list goes on; oversized Banshee intakes, V-Force 3 reed valves, Mikuni TM32 carbs and a custom exhaust system built from two sets of vintage DG expansion chambers. The original wiring was tossed too, and redone with a new VAPE CDI ignition kit and a Lithium-ion battery.

The frame wasn’t spared either. Smyth Innovations de-tabbed it, then cut off the rear section and built a new subframe, with supports that mimic the lines of the stock RD400 side covers. An assortment of gussets and brackets were fabricated to suit. 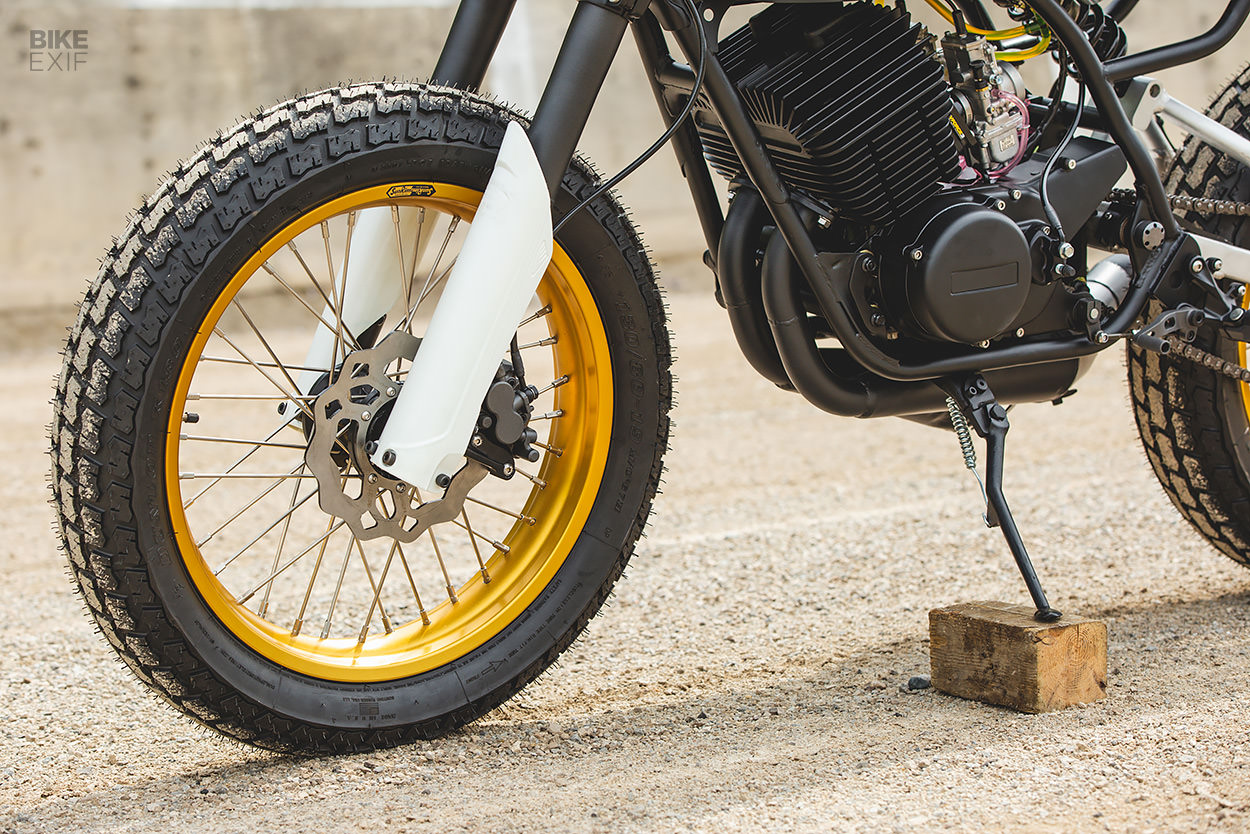 Then came a smorgasbord of suspension mods. A set of 2006 Suzuki GSX-R600 forks were mounted up front, and tweaked to accept a pair of KTM fork guards.

The lower yoke is from the Suzuki too, but the top yoke is a heavily modified LSL part. The team trimmed it to make space for the RD400 tank, shaved off its ignition bracket and added a mount to hold a Koso gauge cluster. Just behind it are new handlebars, fitted with Renthal grips, modified Brembo levers and welded-on micro switches with LED backlights. 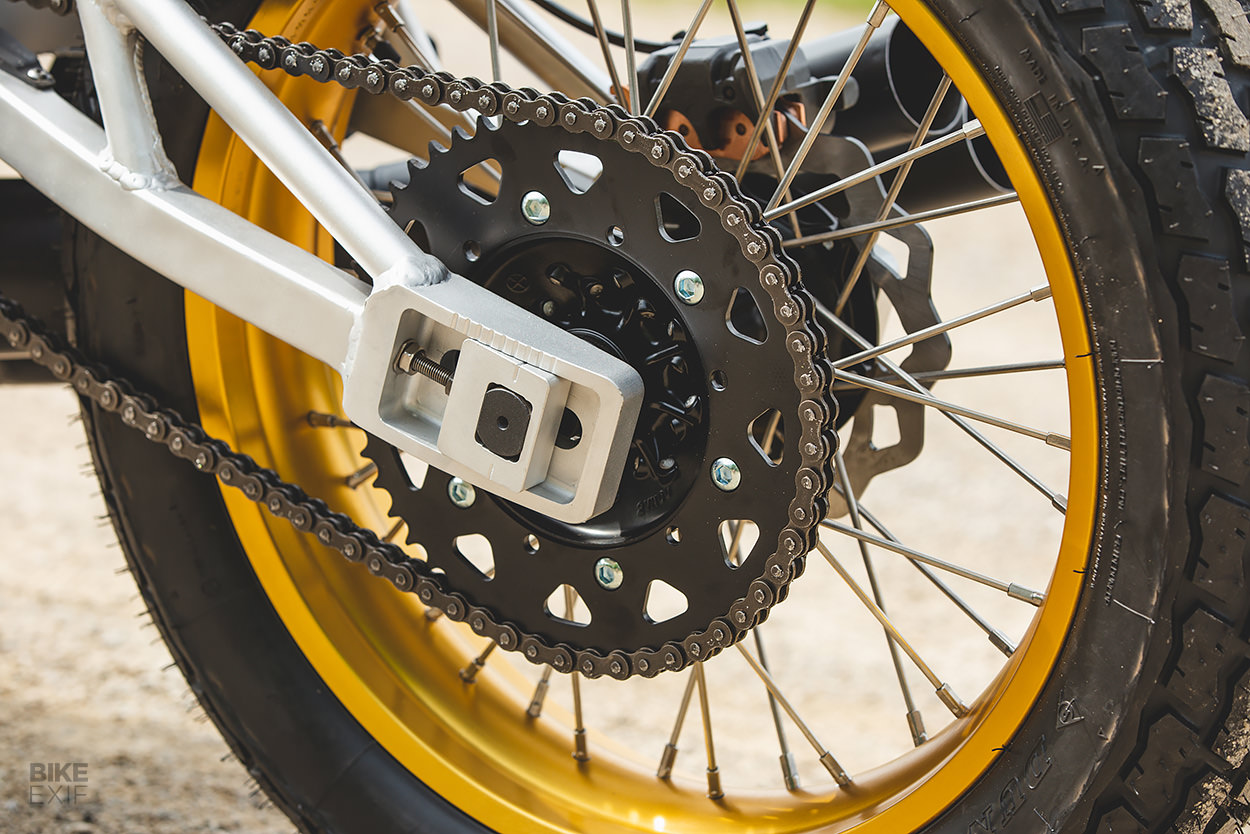 There was more work to be done out back, where Cam had a very specific idea in mind. “We knew we wanted an aluminum swingarm, to help give the bike that vintage trick look,” he says. “And to make the bike look right on 19″ wheels, we needed to add a couple inches to the length.”

The guys started with the swingarm from a 1981 Yamaha IT250, then removed the original shock mount, trimmed the fat, fabricated a new mount and braced everything. The setup also includes new end blocks, and some deft machine work to make the entire axle system more user-friendly. 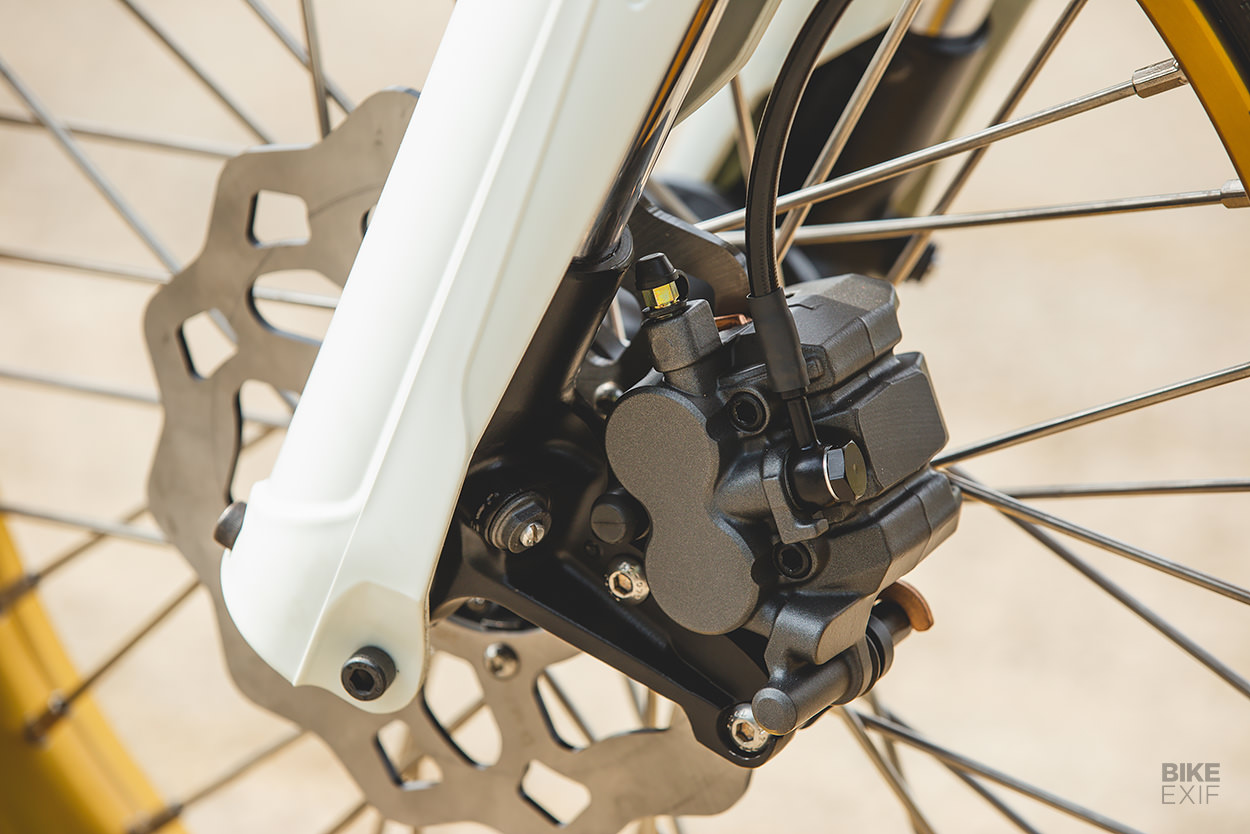 The wheels are 19” Sun Rims, laced to two different model Yamaha YZ hubs, with stainless steel spokes supplied by Buchanan’s. They’re wrapped in Dunlop K180 tires; a prize sponsored by Dunlop during the early rounds of the competition.

Since this flat tracker is destined for street use, it has brakes at both ends. The setup includes Kawasaki Ninja 300R calipers, with Galfer rotors, pads and lines. All the little bits like the axles, swingarm pivot and steering stem nut, were machined from scratch. 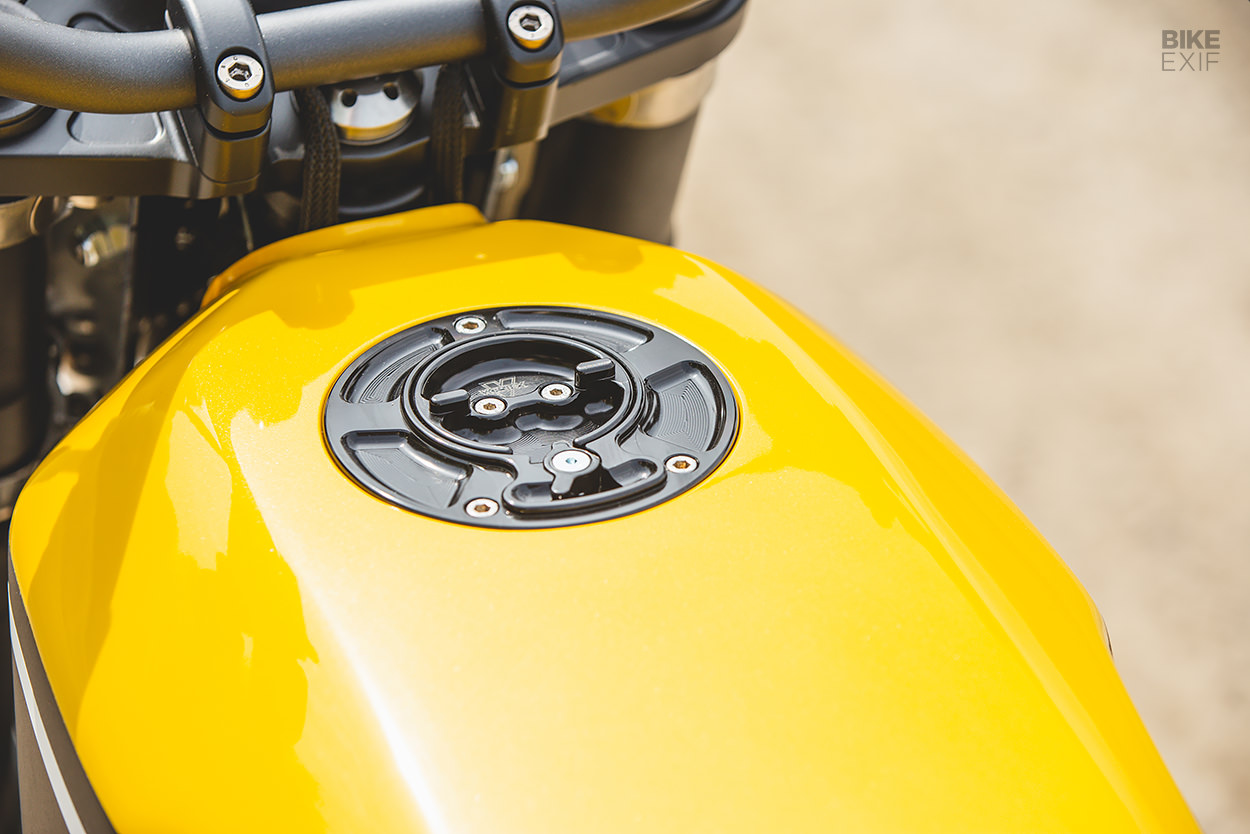 For the bodywork, Cam swapped out the Daytona tank for a standard RD400 unit, which was subjected to a whole host of mods. Most notably, a Kawasaki Ninja 650 filler neck was welded in to accommodate a flush-mount gas cap from Vortex. The tank’s mounting angle was tweaked too, and the fuel tap hidden away behind the carbs where it’s still accessible, but not quite as visible. 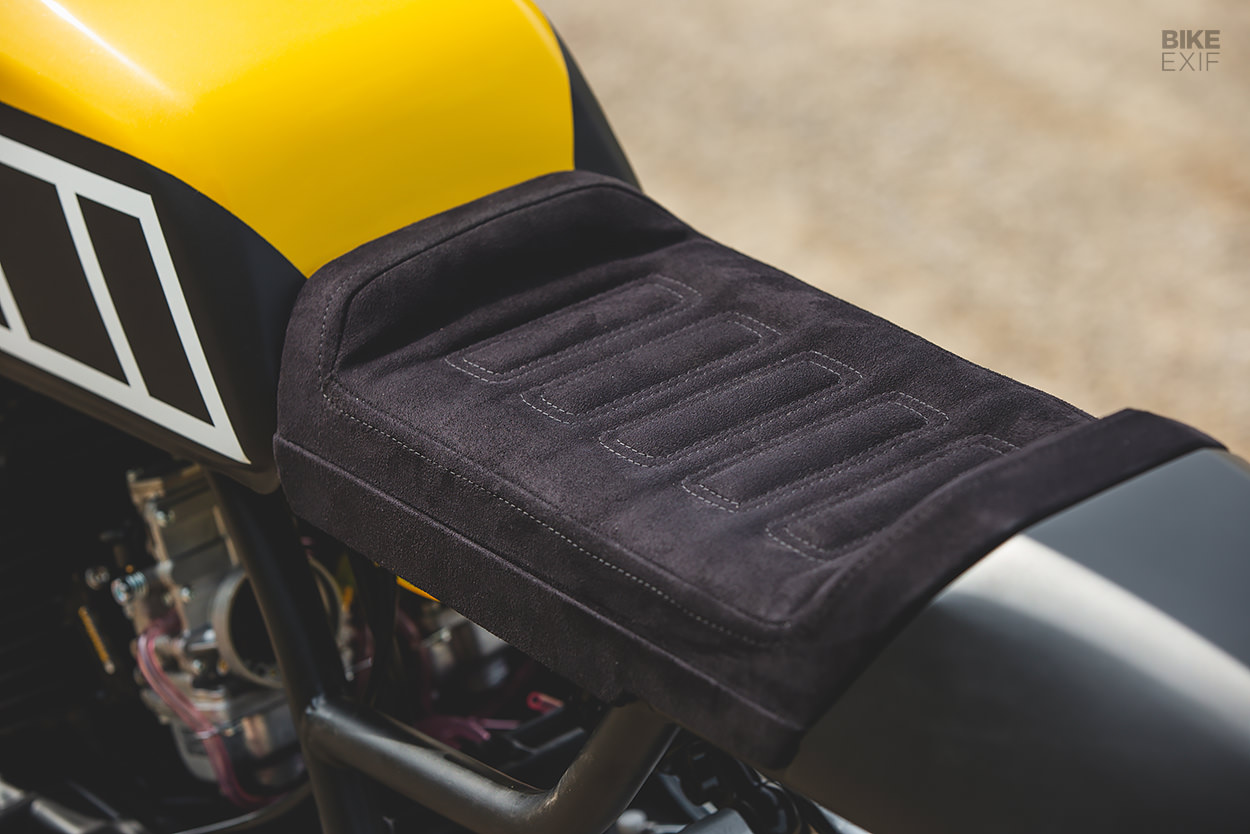 Sitting aft of the tank is a custom-made seat and tail unit, designed to carry the tank’s silhouette through to the rear. The design was first mocked up with cardboard cut-outs and pieces of string, to make sure everything flowed perfectly. A hit of Alcantara on the seat pad adds a classy touch.

It’s hard to spot the taillight at first, but that’s by design. Cam used a Koso Hawkeye LED, then mounted it under the tail hump behind a smoked acrylic pane. 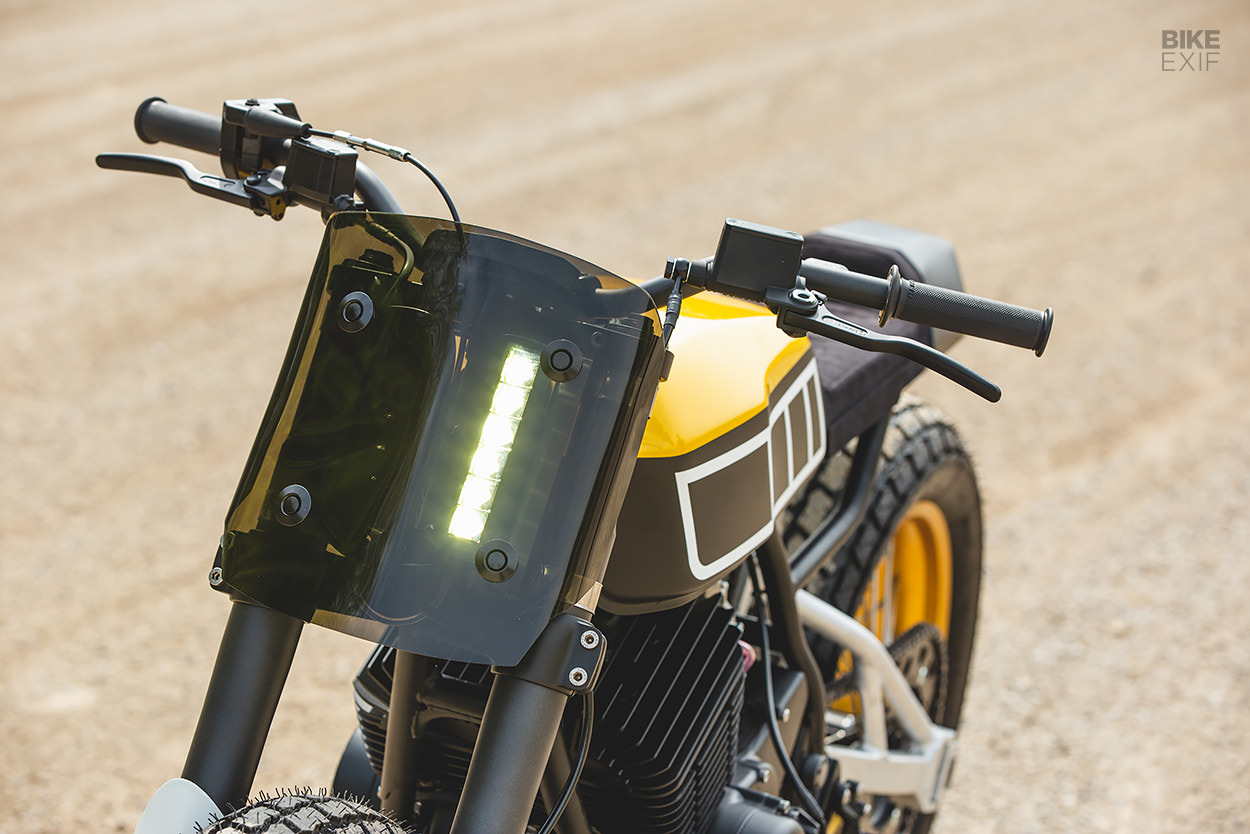 “From the beginning, if we were going to build a street tracker it had to look more like a flat track racer than a street bike,” he explains. “And for us that meant completely hiding the lights.”

To achieve this up front, they mounted two 6” LED bars behind a hand-formed acrylic number board. The lights are set at different angles, to operate as high and low beam headlights. Everything sits on custom mounting hardware. 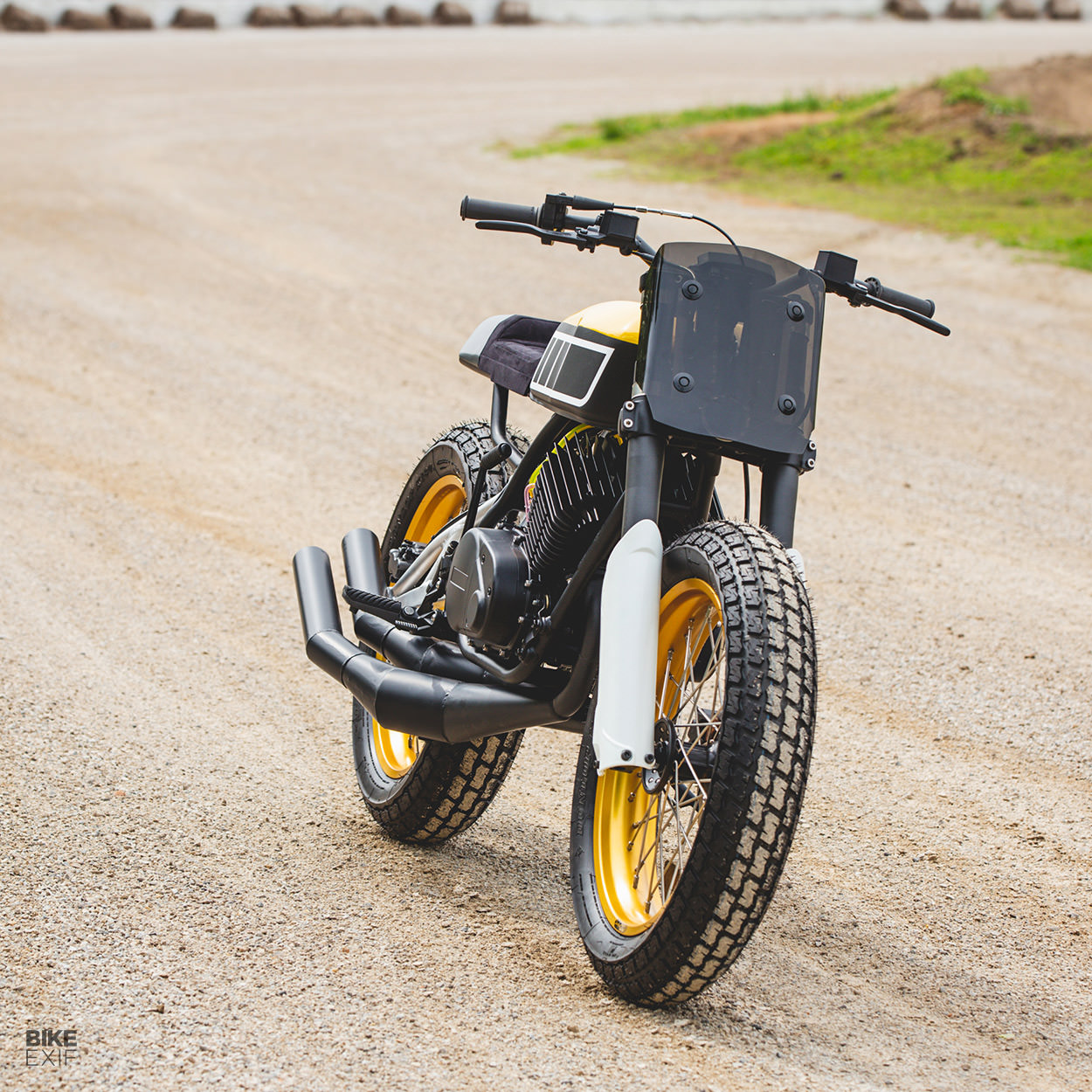 Smyth’s 427 Tracker nails the trifecta of two-strokes, flat trackers and Yamaha iconography. Sadly, it didn’t take home first prize in the build-off—but it’s a winner in our book.

Cam would like to extend special thanks to his family, friends, and sponsors that made this project happen! 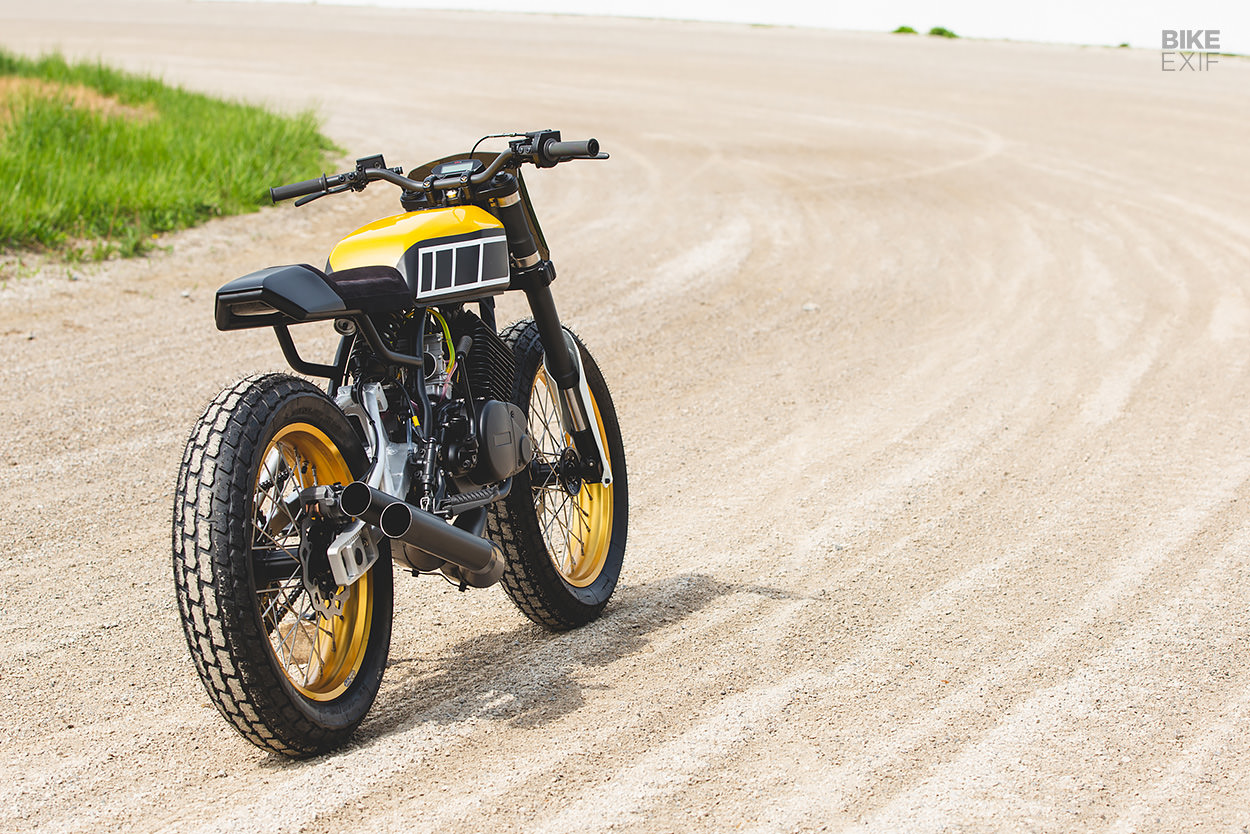