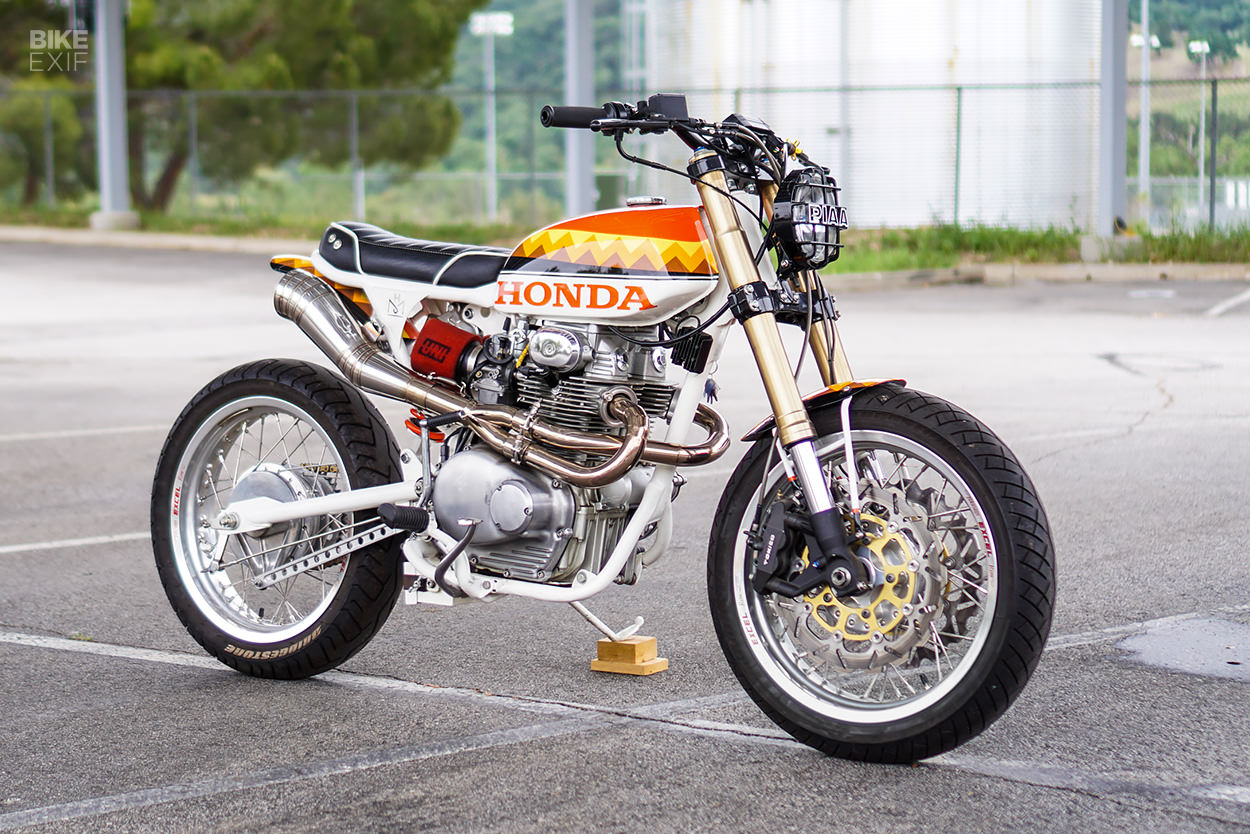 Miguel Castro seems to be working his way through a checklist of custom motorcycle styles. His first build was a cafe racer, but then he moved onto his second: this cheeky Honda CB350 street scrambler.

Based in California, Miguel holds down a day job as a creative director at a major ad agency, and tinkers on bikes after hours. He grew up learning how to wrench from his father, who restored Jaguars for a living. Working under the handle Dia de los Motos, he does just about all the work on his builds himself, barring a few specialist tasks. 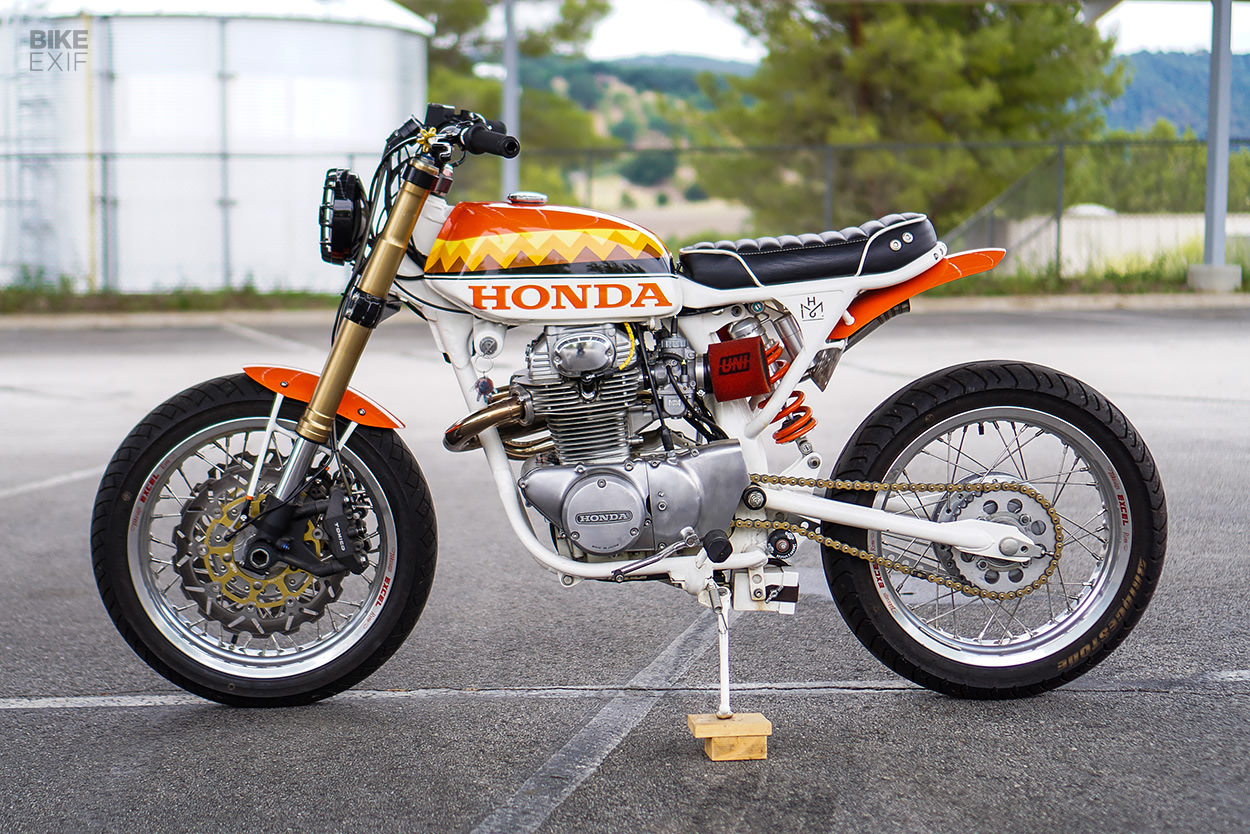 Miguel sourced the 1970-model Honda CB350 donor for this project locally. It wasn’t running, but it was a complete bike and had been living in a garage—so at least it wasn’t a total wreck. He tore it down to its bare bones and started conceptualizing.

“My inspiration really came from all the bikes I saw one time at the One Moto Show,” says Miguel. “It really got me wanting to do something completely different than the typical CB350 cafe racers you see. I wanted to bring a bit more of a modern look to this period of bike.” 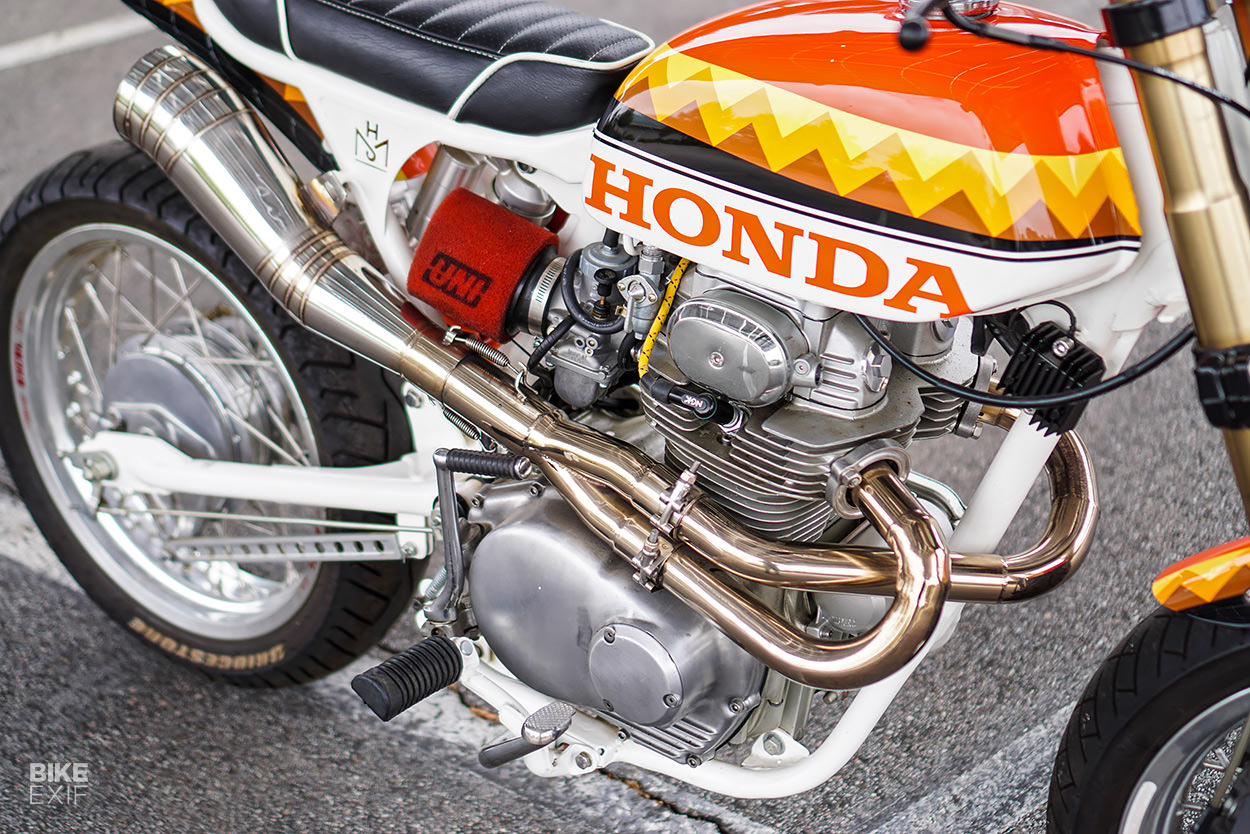 Miguel’s first step was to rebuild the Honda’s seized motor, with oversized pistons and rings from Wiseco. The cylinder and head work was outsourced, but he handled the rest of the rebuild himself. The new setup includes an upgraded cam tensioner and a Pamco electronic ignition.

The carbs are a pair of Mikuni VM30s, breathing through foam pod filters from Uni Filter. Miguel welded up a set of two-into-one stainless steel exhaust headers, then added an aftermarket GP-style muffler that he grabbed off eBay.

Next it was time to upgrade the CB350’s running gear. A Suzuki GSX-R front end was grafted on, complete with its upside-down forks and twin Tokico disc brakes. A new set of Excel rims was laced up, keeping the drum brake hub at the back.

Miguel also converted the CB’s rear suspension from a twin- to single-shock setup. He welded new mounting tabs onto the frame and swingarm, then wedged in a Honda CBR shock body with a Progressive spring. 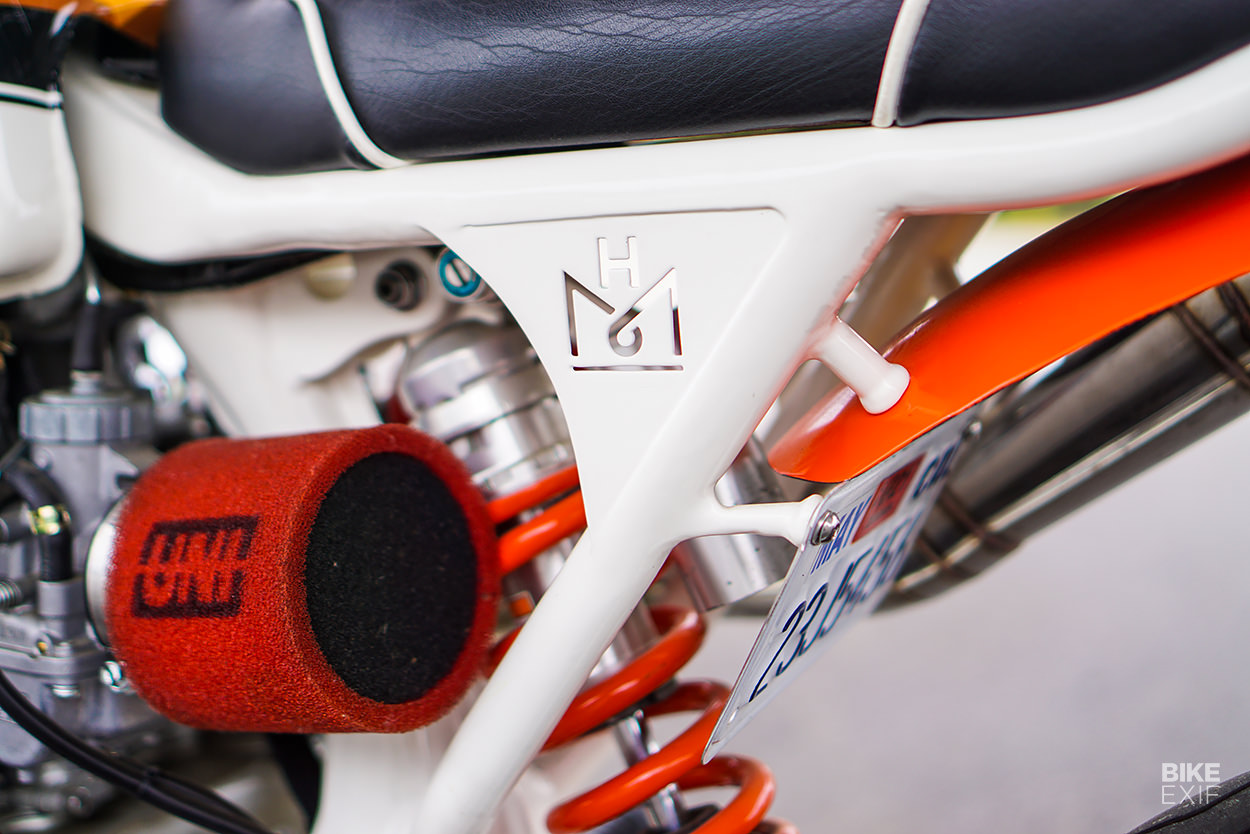 There’s more fabrication up top, with a new subframe that holds a three-quarter length seat. The layout includes mounting points for the rear fender and license plate holder, along with gussets with custom logos cut into them. Miguel also incorporated an LED taillight and turn signals into the actual tubing of the rear loop.

Up front are a set of Renthal handlebars, a Brembo brake control and micro switches. There’s a Koso digital speedo too, with a PIAA headlight. 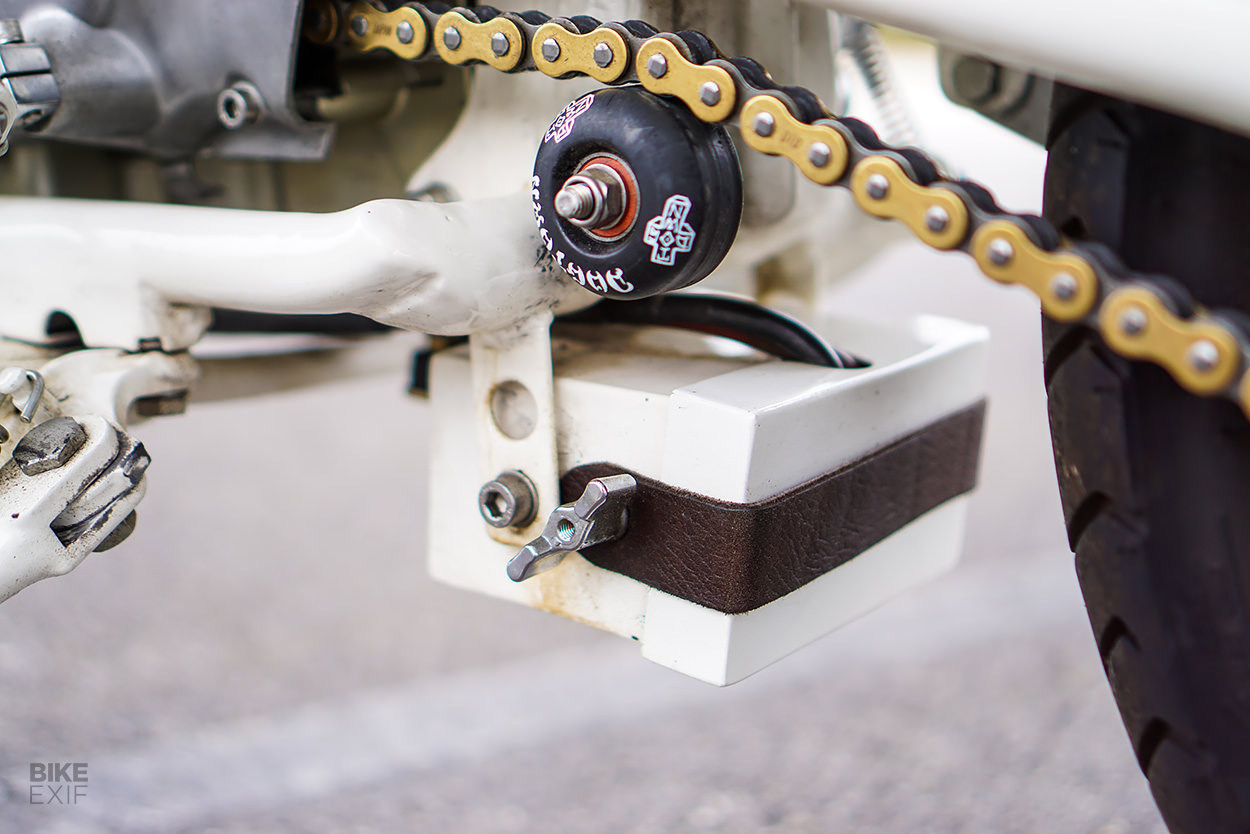 Lower down you’ll find a hand-made battery box, housing a Shorai Lithium-ion battery that’s held by a custom leather strap. Just above it is a makeshift chain roller that uses a skateboard wheel. Miguel rolled the fenders himself too—his first attempt at using an English wheel.

Miguel leaned heavily on 70s influences for the Honda’s eye-popping livery. Amanda Brisebois from Black Widow Custom Paint laid down the paint according to his design, and Ginger McCabe at New Church Moto upholstered the seat. 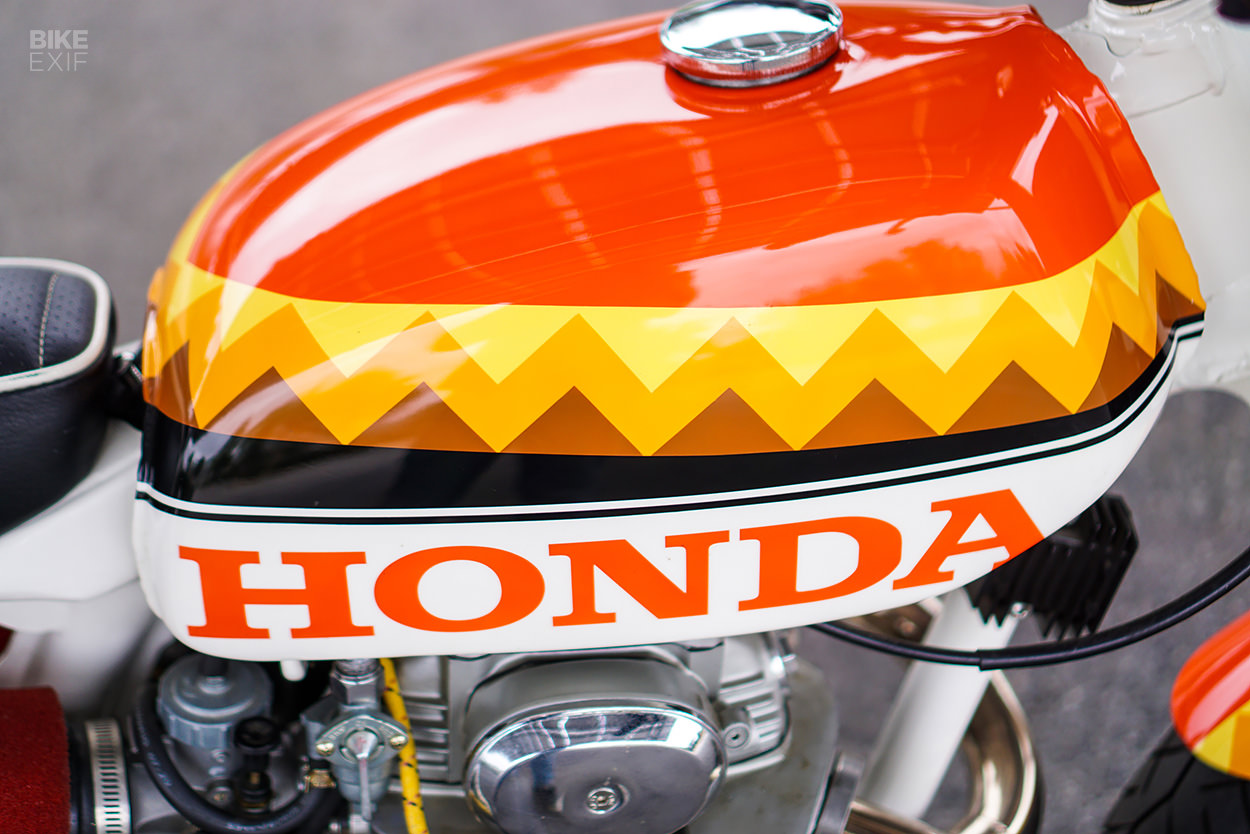 In case you’re wondering, this sharp little whip is now for sale so that Miguel can fund his next project. And we’re betting it won’t be another cafe racer or scrambler…

“No plans yet on what it will be,” he quips, “but I’m leaning towards a bobber.” 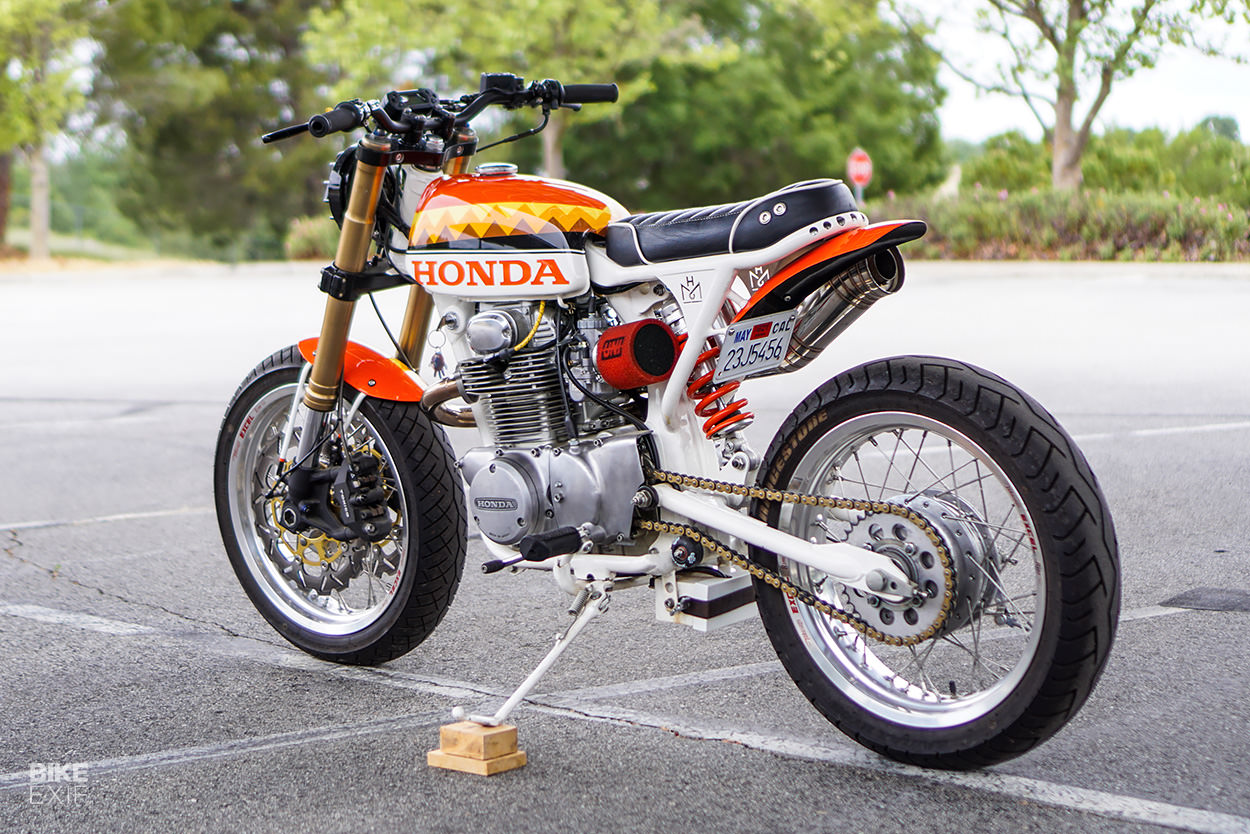