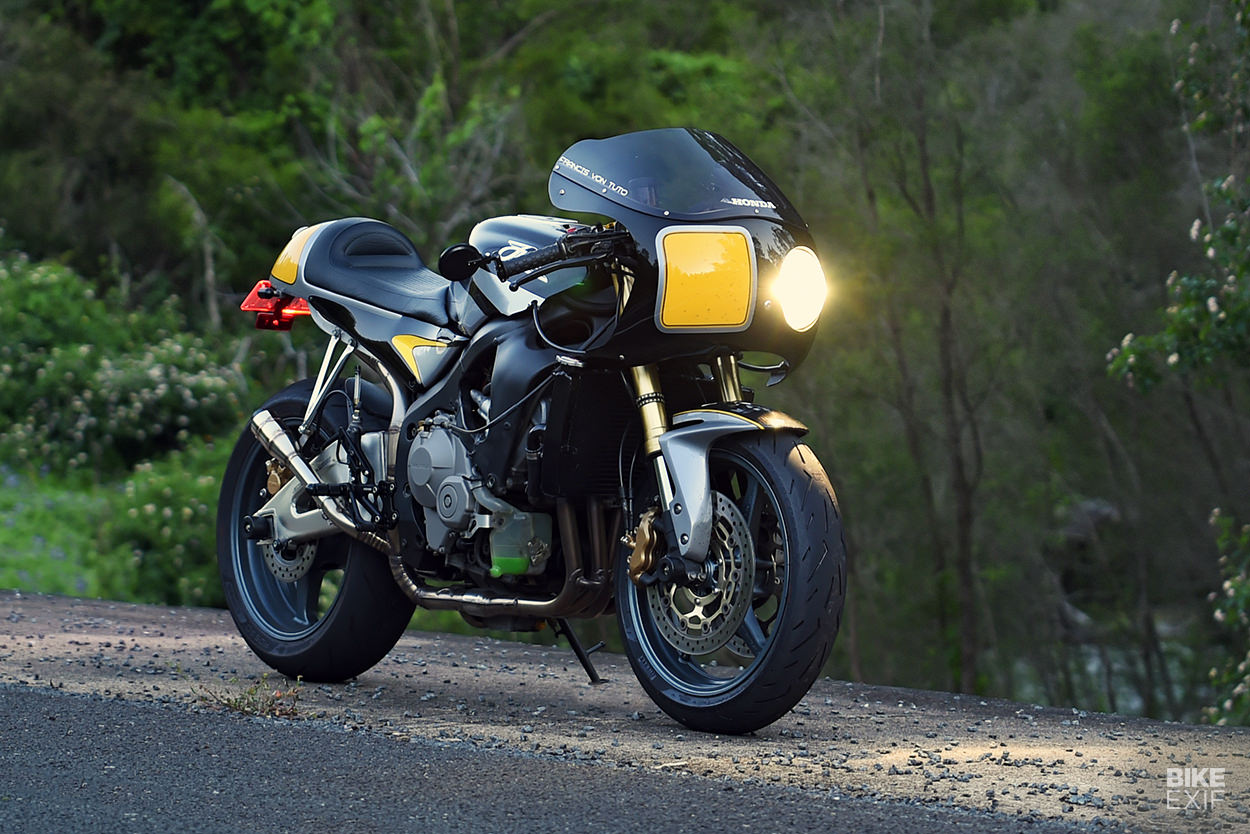 We’re suckers for retro sportbike style. And if it’s married to classic Honda build quality and engineering, you’ve got an intoxicating mix.

That’s why this 2006 CBR600RR ticks all our boxes. It comes from Italian builder Francis Von Tuto, who has just returned to his homeland after eight years in Queensland, Australia. His tools and personal ride are in transit to Italy right now, but he’s left this latest build behind—and some lucky Ozzie is going to have it in their garage soon, because it’s for sale. 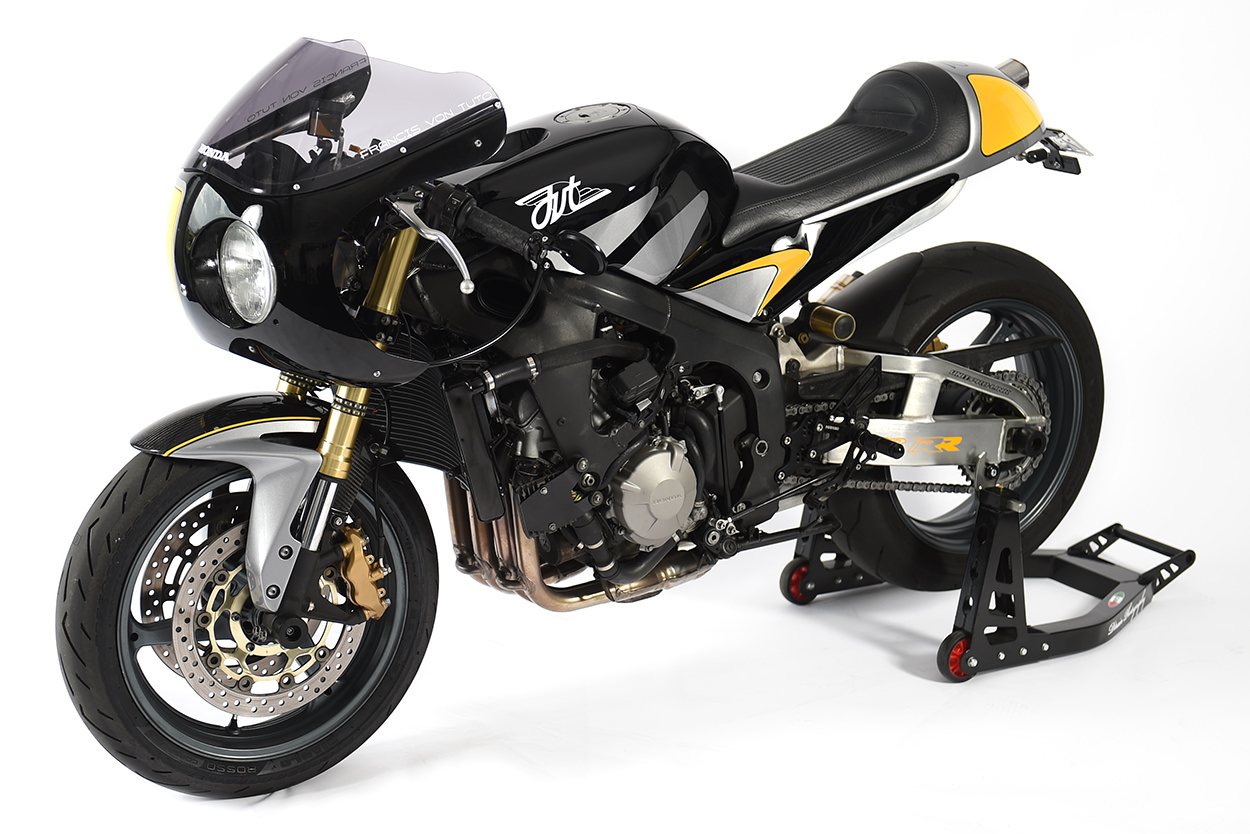 “After using donors from the mid 70s to the early 90s, I decided to ‘take a bet’ for bike number nine: a retro-looking build, starting from a modern base,” Francis tells.

He chose a CBR600RR because it’s a model close to his heart. “The second generation was released while I was working for a Honda dealership in Florence,” he recalls. “I had dozens of these bikes coming through for servicing and upgrades, so I know them quite well. I’ve personally owned four of them, two in Italy and two in Australia.” 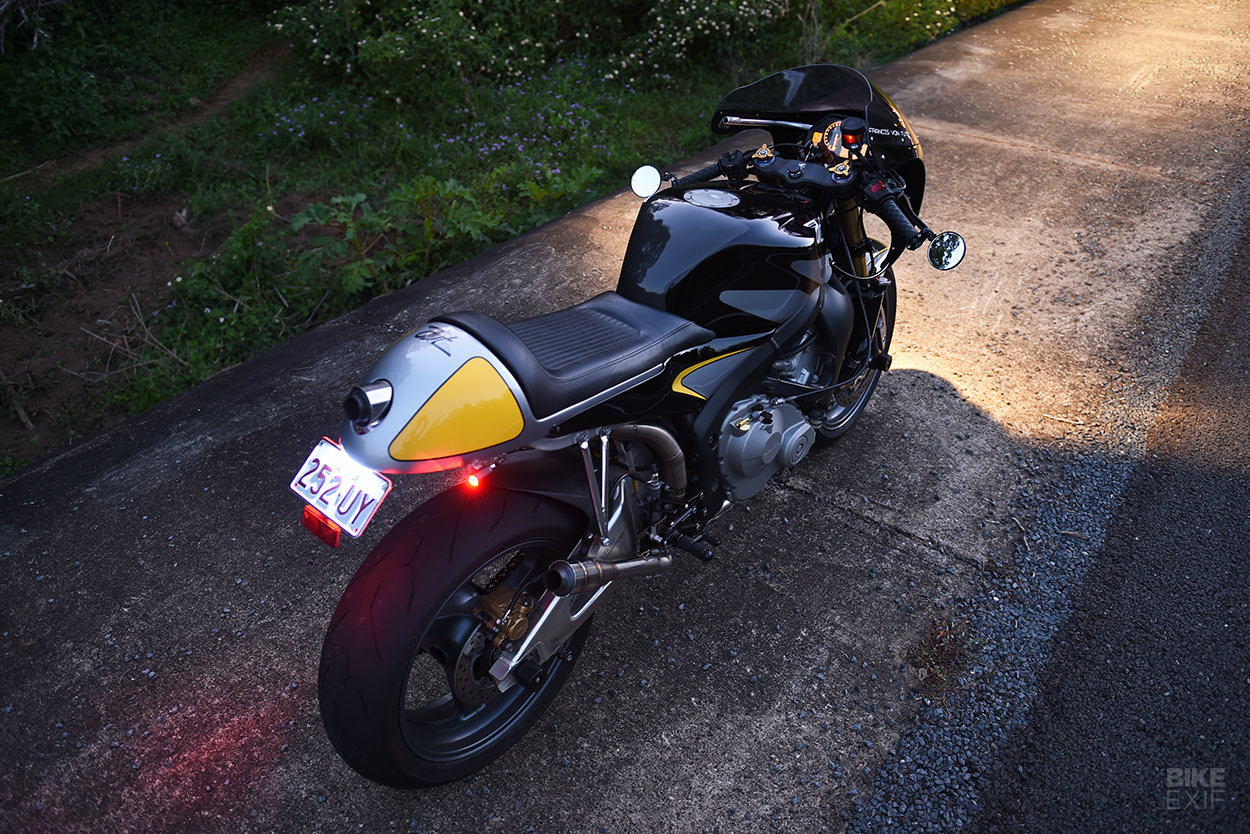 Francis originally planned for this 2006 model to be his track bike in Australia. He bought it with cosmetic damage, but it had only 30,000 km on the clock. “Structurally and engine wise, it was absolutely perfect.”

The CBR had been sitting unused in a garage for a long time, so Francis started by giving it a major service—right down to flushing and cleaning the entire fuel system and all eight injectors. “On inline-4 bikes there’s very little space to work—especially around the cylinder head—but the quality of Japanese components is always appreciated.” 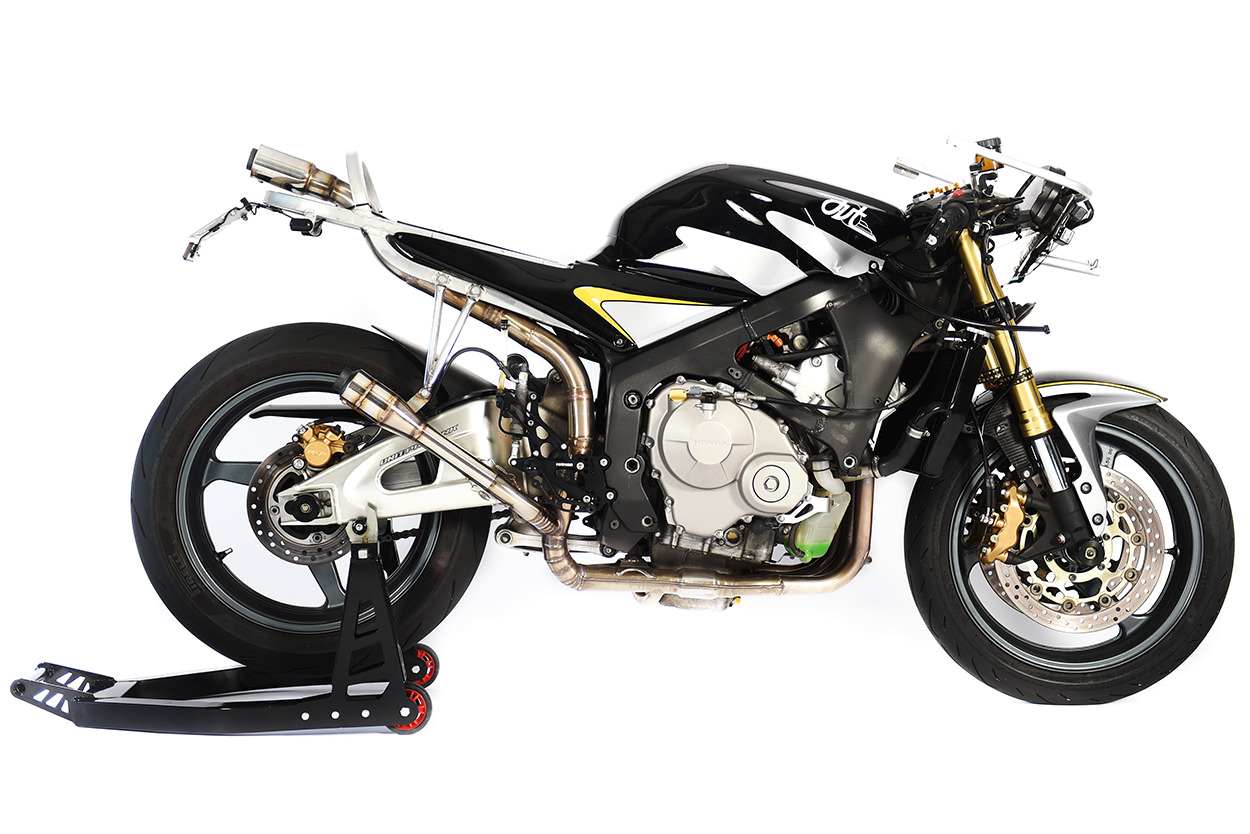 Next, he rebuilt the suspension, fixing the leaking seals, and started test-fitting the classic fiberglass bodywork lying around in his shop. “The front fairing is a fiberglass Ducati 900ss race replica—made by Brisbane guru Paul Borowinski, then modified to suit the Honda.”

To fit the new bodywork, Francis fabricated new mounts and a new subframe. “It’s totally detachable, so I could leave the main frame untouched for once,” he said. “Using a sport bike as a donor, lightness is a must—so I’ve opted for aluminum.” 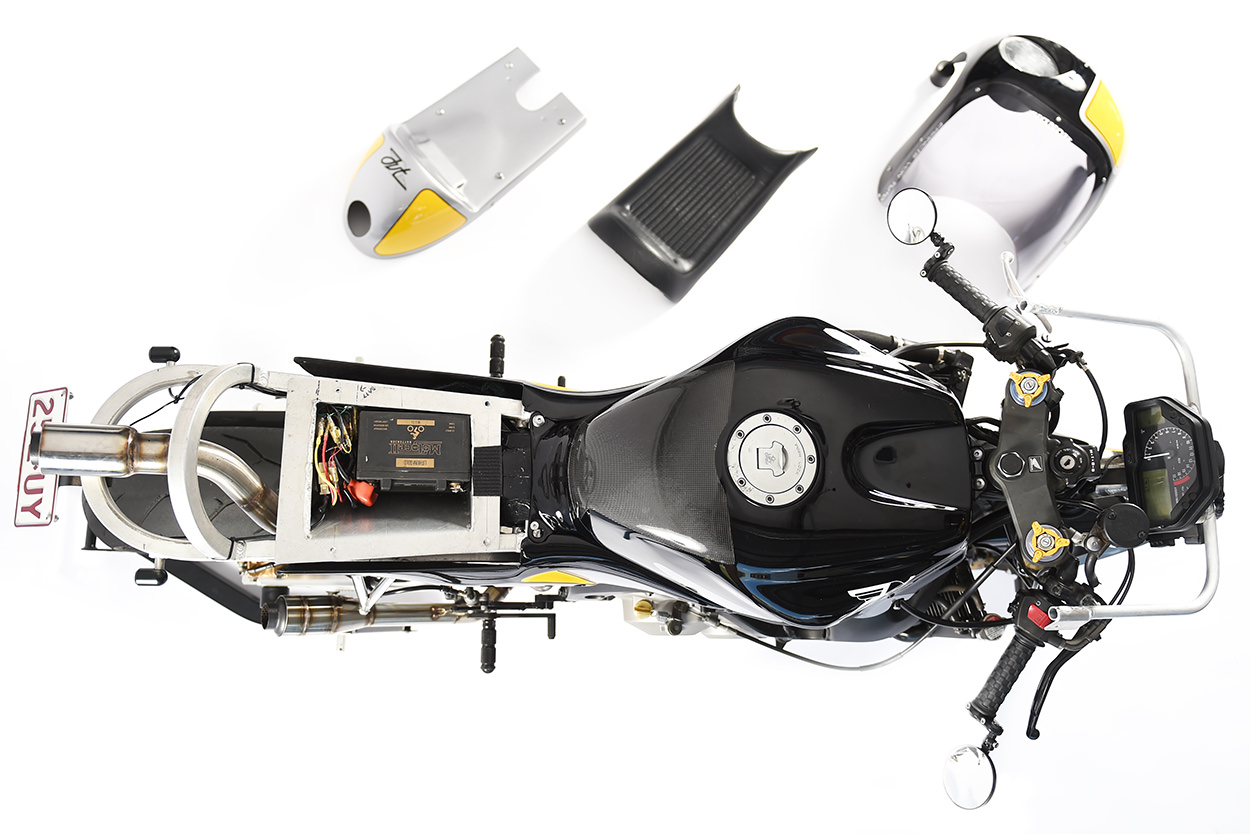 The subframe design is adapted from a unit that Francis built for one of his previous 600RRs. Modified with the help of CSF Welders in Queensland, it’s made from 25mm square section tubing, and also allows space for the electronics box, a lithium battery and the starter relay. The tail hump is also home to 3-into-1 indicators from Purpose Built Moto.

The 900ss fairing underwent major surgery, since the original had way too long side wings, and flow into the airbox was poor. Francis has trimmed it, installed a tinted screen, and cut a hole to fit a 4.5-inch side-mounted Koito H4 headlight, in classic Suzuka 8 Hours style. 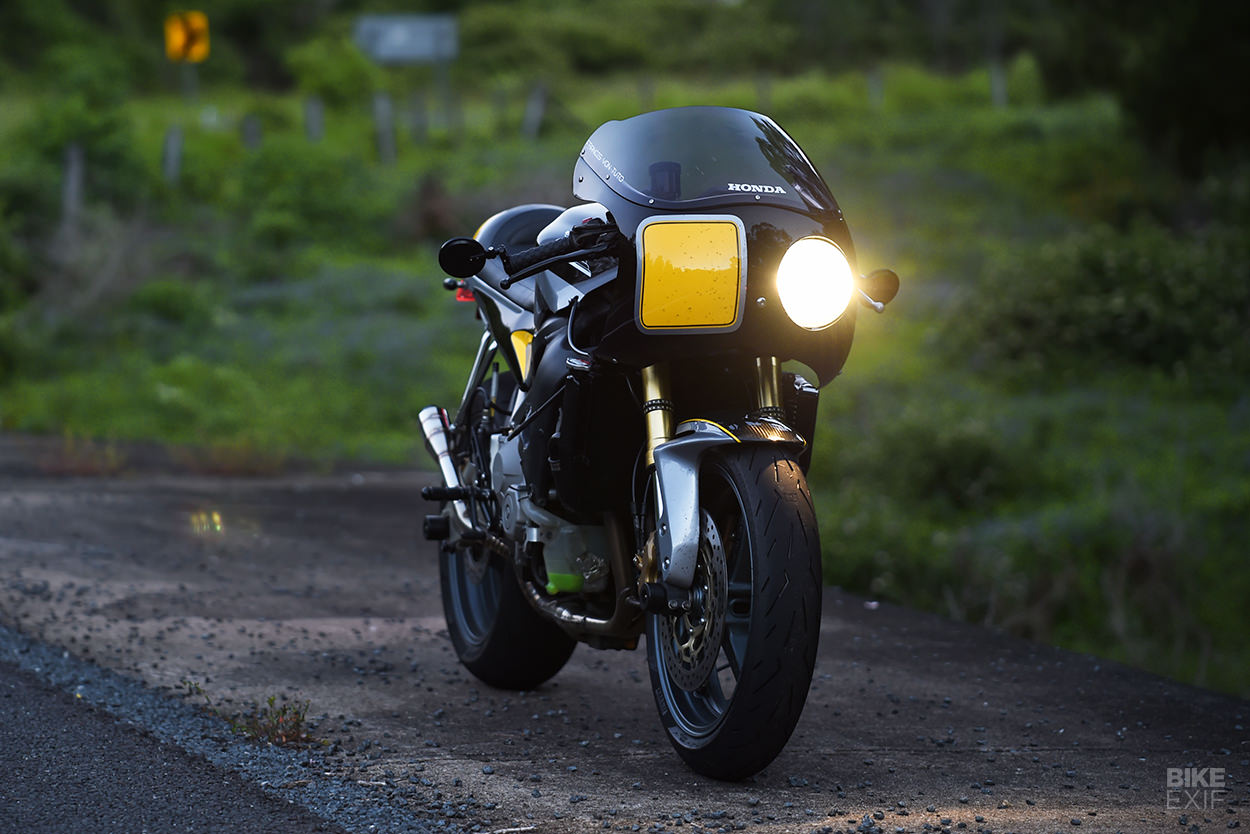 The fairing proved tricky to mount, forcing him to go through two complete attempts at fabricating stays and brackets until he was happy. “It’s farina del mio sacco, which translates as, ‘My own flour’,” he says. “An Italian saying that means, ‘I did it all myself’!”

The highlight is a quick release central pin: a solid aluminum rod that slides into a tube welded onto the back of the dash plate, secured by an R-clip for easy removal. “A strong structure and stability are a must, since this rig is capable of well over 250 kph.” 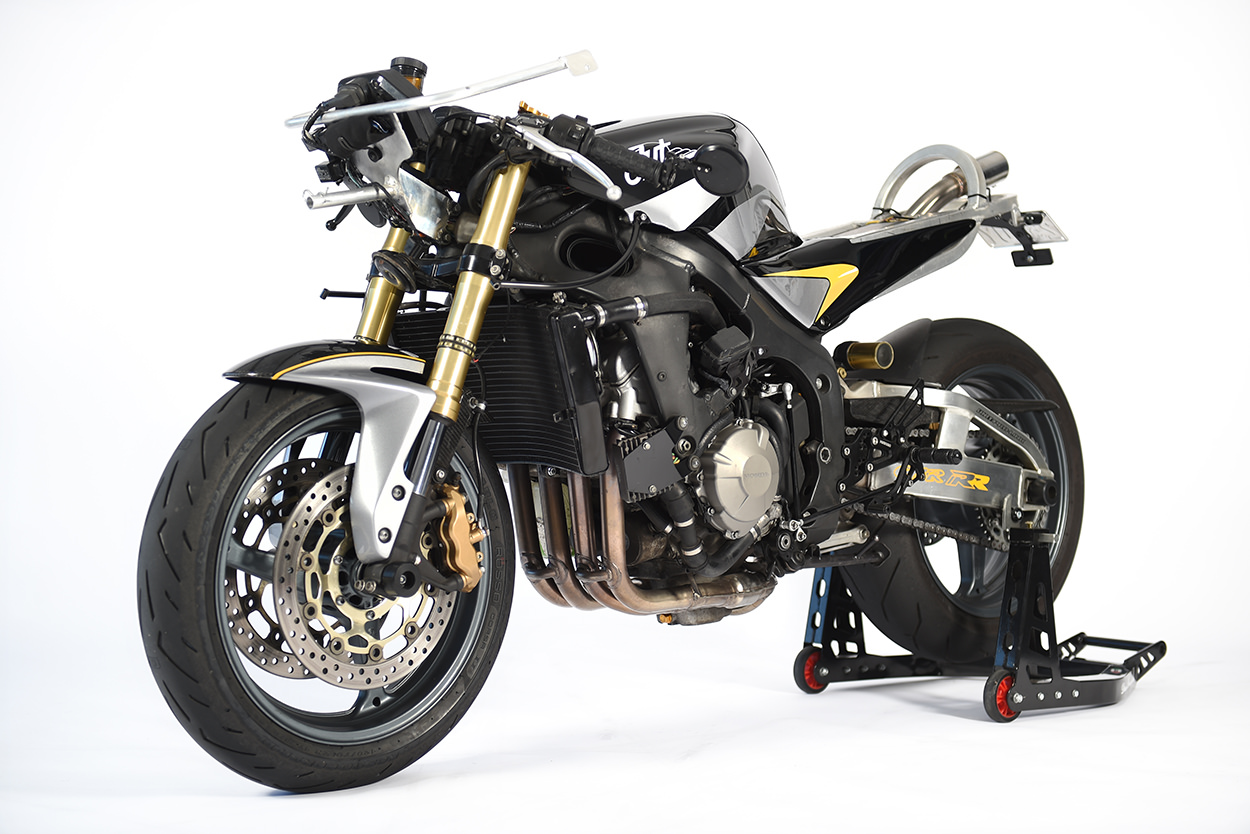 The exhaust system is unusually discreet for a custom build; it’s Francis’ reinterpretation of a Moriwaki RC211V 4-into-2 system. “The headers are standard, chopped before the cat converter, and modified at the end—all in stainless steel tubing.”

Incidentally, Francis uses a drop saw to section his pipes neatly: “I’ve used angle grinders before, and it’s not only deadly boring but also difficult to keep a straight line. So do yourself a favor and buy a drop saw or cold saw, depending on your wallet!” 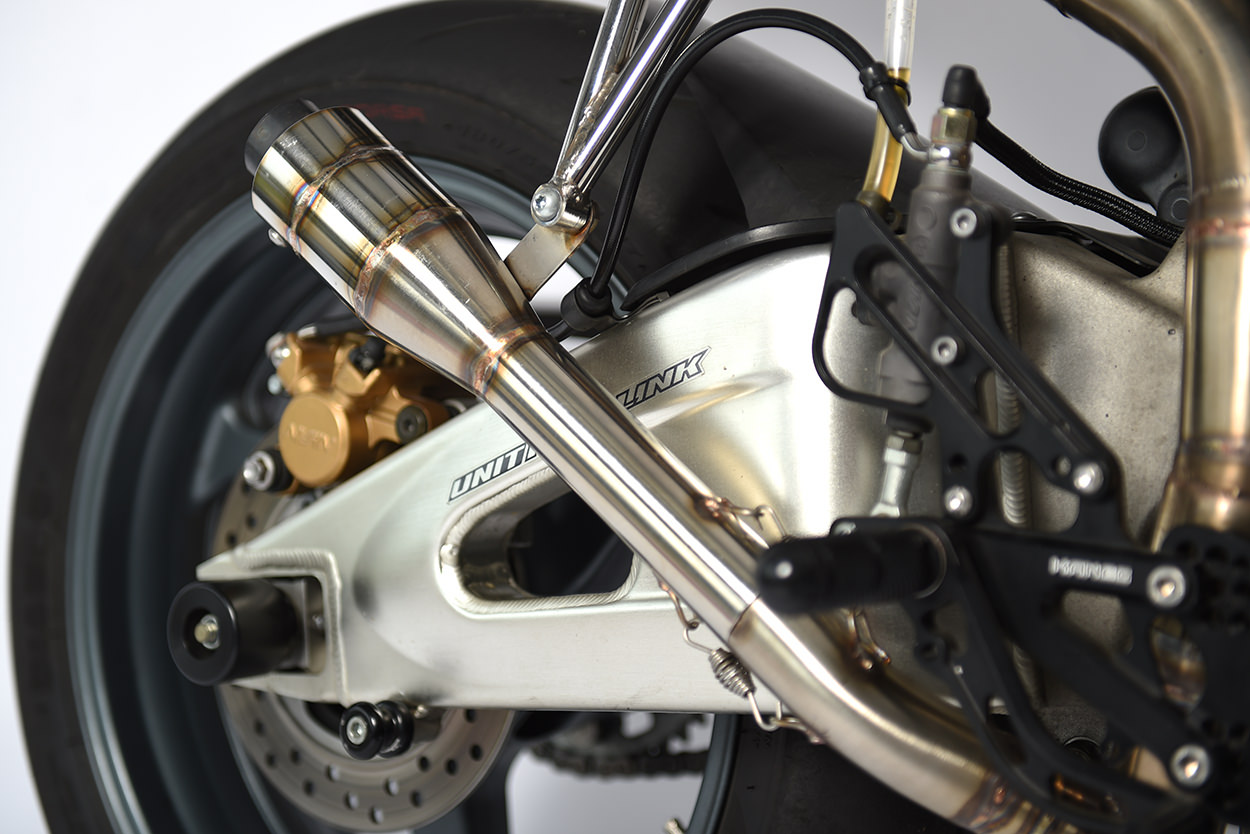 The ‘shorty’ mufflers are made of 63mm SS tube, and for the undertail joints, Francis used a hammer and a handmade dolly to shrink the diameter down to 44 mm. Both mufflers are packed with ‘little bomb baffles.’ “Man, she does scream over 5,000 rpm! It’s a very clean and angry sound, giving this build a real ‘racer’ personality,” Francis reports.

“When I had a genuine Moriwaki on my previous CBR, the power band totally changed—moving the torque to higher rpms and leaving everything below 8,000 duller. But this system is good across the whole scale. And I’m pretty happy considering that I haven’t fitted an auxiliary ECU, and have used the standard filter and airbox.” 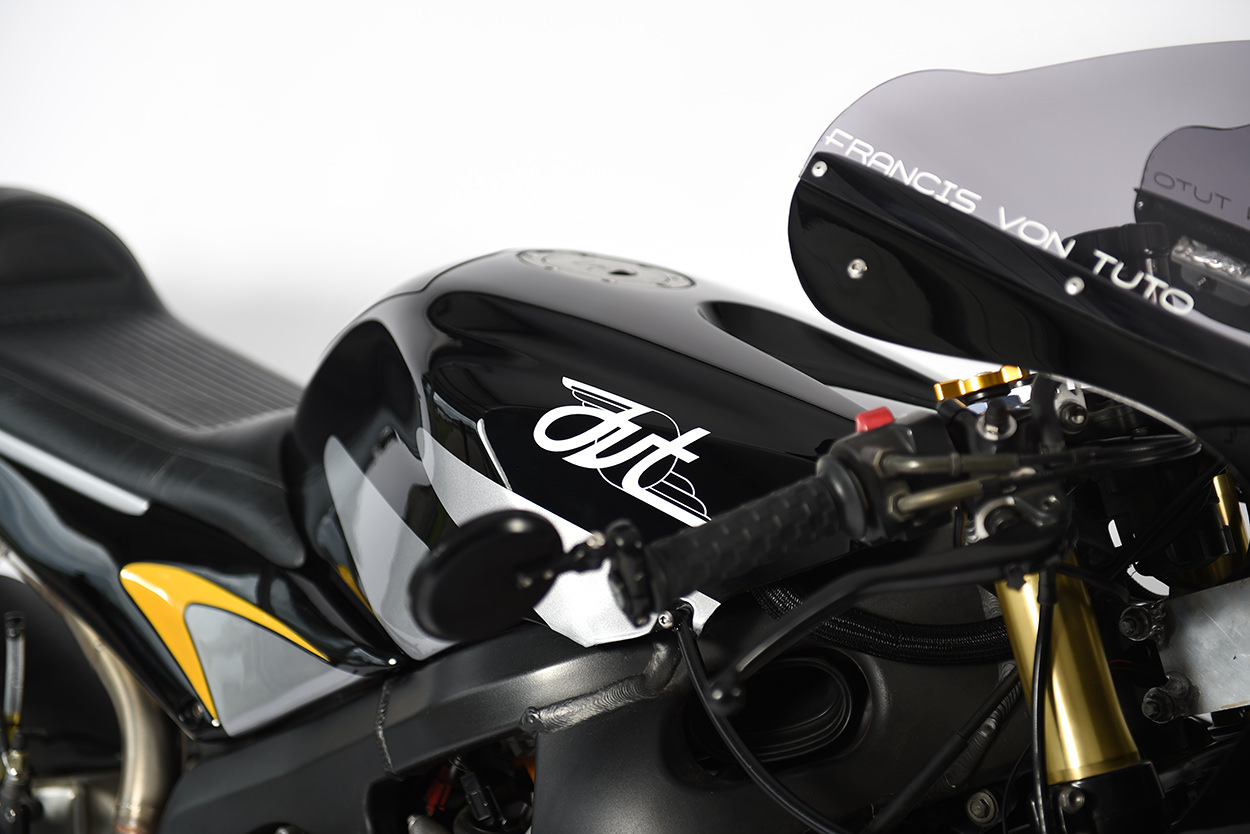 The tank is the factory unit, but since Francis removed the ram air tubes, he’s had to cover the slots with plastic welding. “I hate the process, but it’s better to weld ABS [thermoplastic] with ABS, rather than use fillers or fiberglass.”

The front fender is a genuine Honda carbon fiber accessory from a 2010-model 600RR, but the side covers are handmade. “I liked how the original ones fitted on the frame and below the tank cover, but they had nothing to do with the shape of the tail,” says Francis. The seat was also made in-house with a fiberglass base, and was foamed and trimmed by upholstery master David Webster. 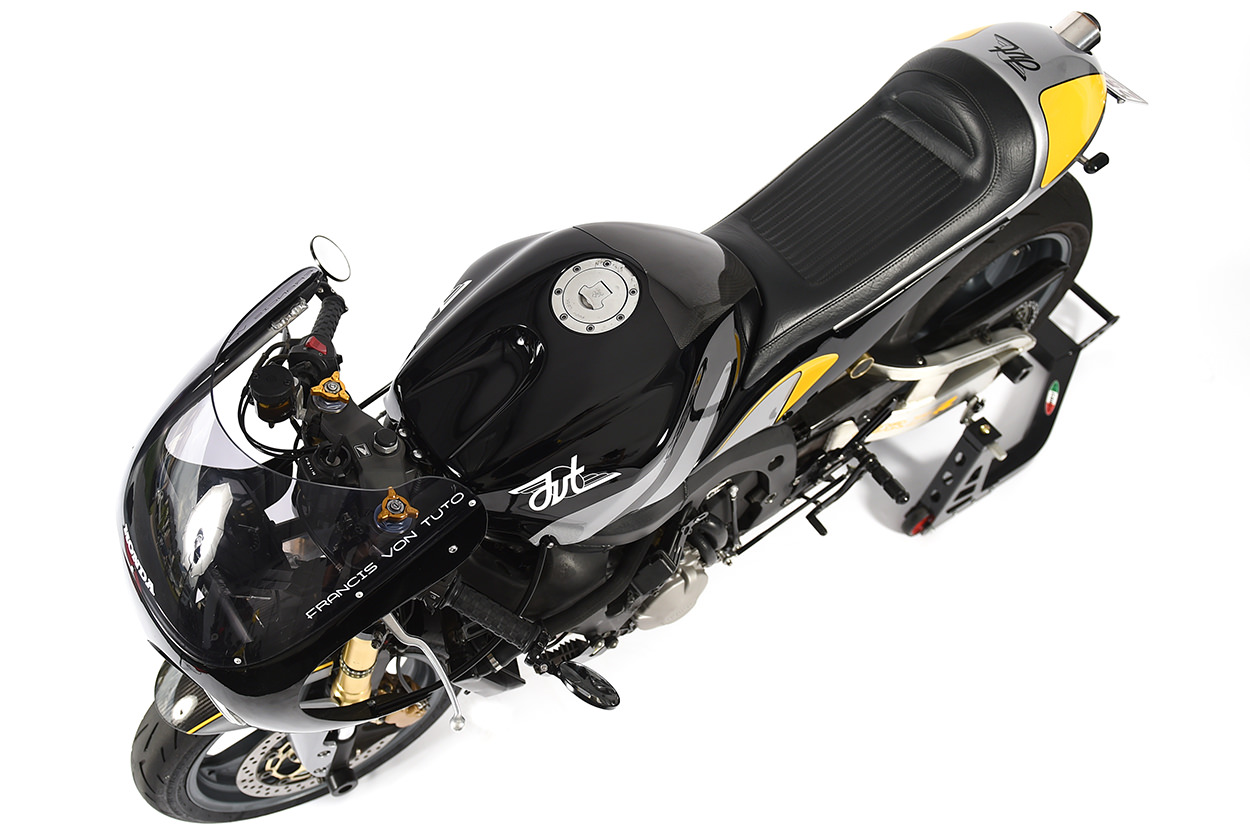 “I wasn’t sure abut the design until the very last minute, but I really like the finished product. It’s fitted to the frame with just one 6 mm bolt at the back and a wide strip of Velcro to hold the front down—which is more than enough, since it already fits snug!”

Francis has finished off the upgrades with a Brembo front radial master cylinder and remote reservoir, and braided lines. 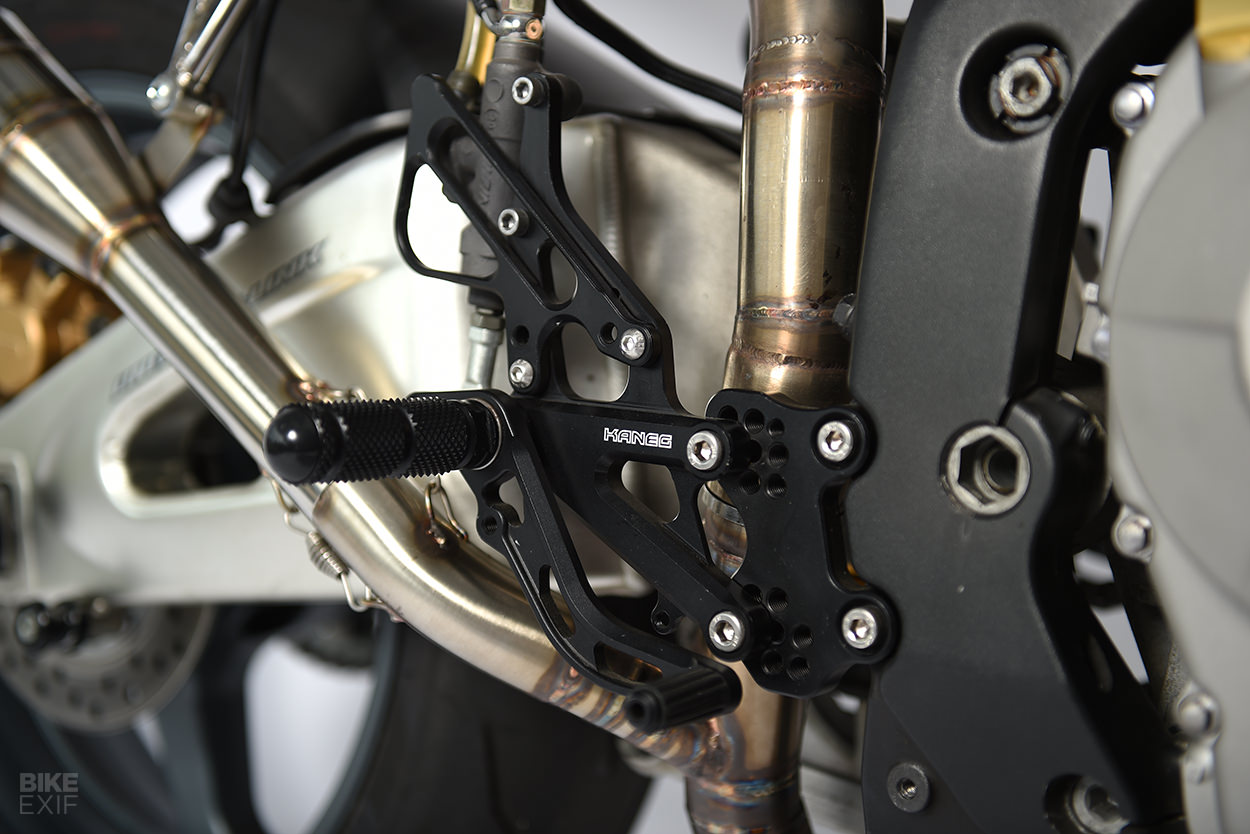 The tires are Pirelli Diablo Rosso Corsa II: “Supercorsa would have been even better, but for road use they’re a total waste. I’ve built this bike with the intent to ‘look cool’ without compromising performance, and still potentially be a daily rider.” 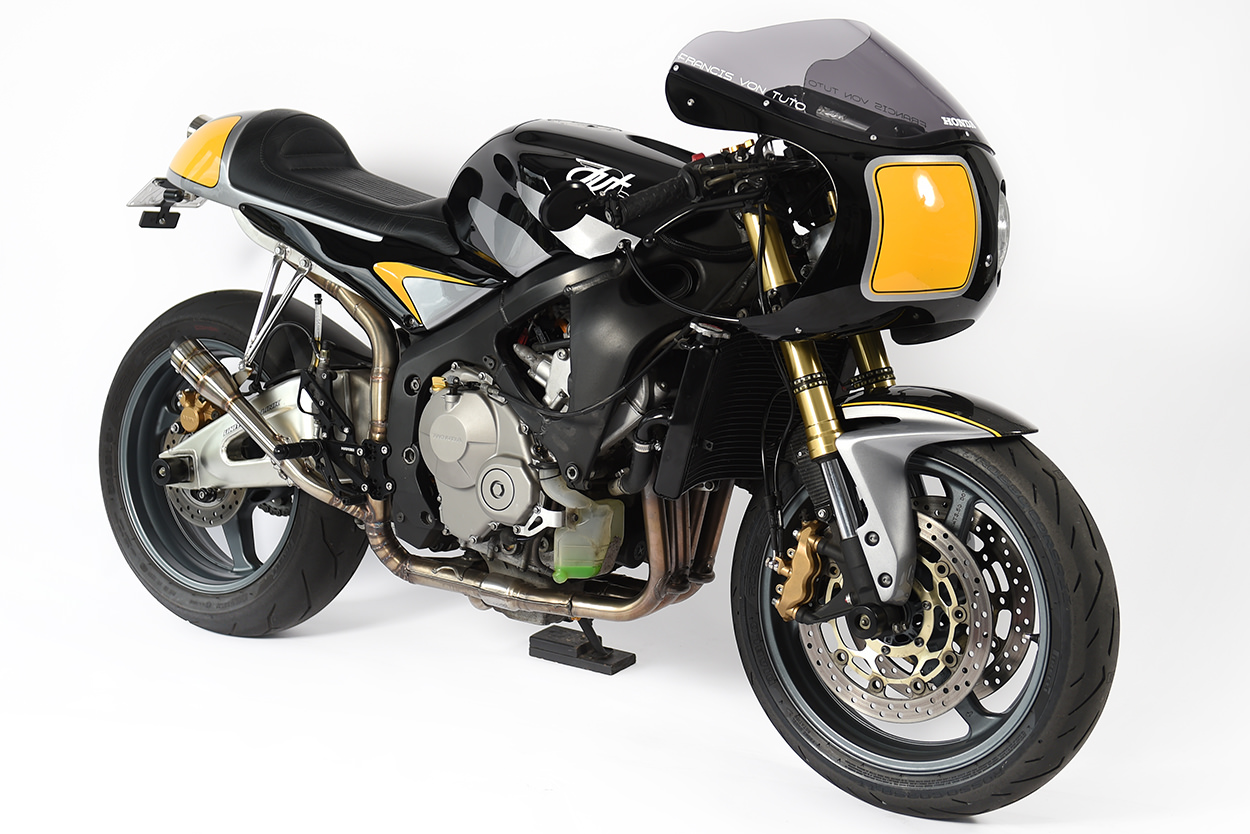 The black and yellow paint is a nod to one of Honda’s many iconic sportbike liveries, and was shot by Jimi Lucas at Extreme Dents. “The silver wings on the tank come from the 2005 CBR color scheme,” Francis reveals, “and the silver tail was used for the 2006 red-and-blue model. I love these colors—I would put yellow elements in every build of mine! It reminds me of Renault competition cars, and 80s motorsport in general.”

When looking at custom builds, we often find ourselves guessing what they’d be like to hustle down a typical road. But we know this CBR600RR will be a fun yet relatively practical ride. 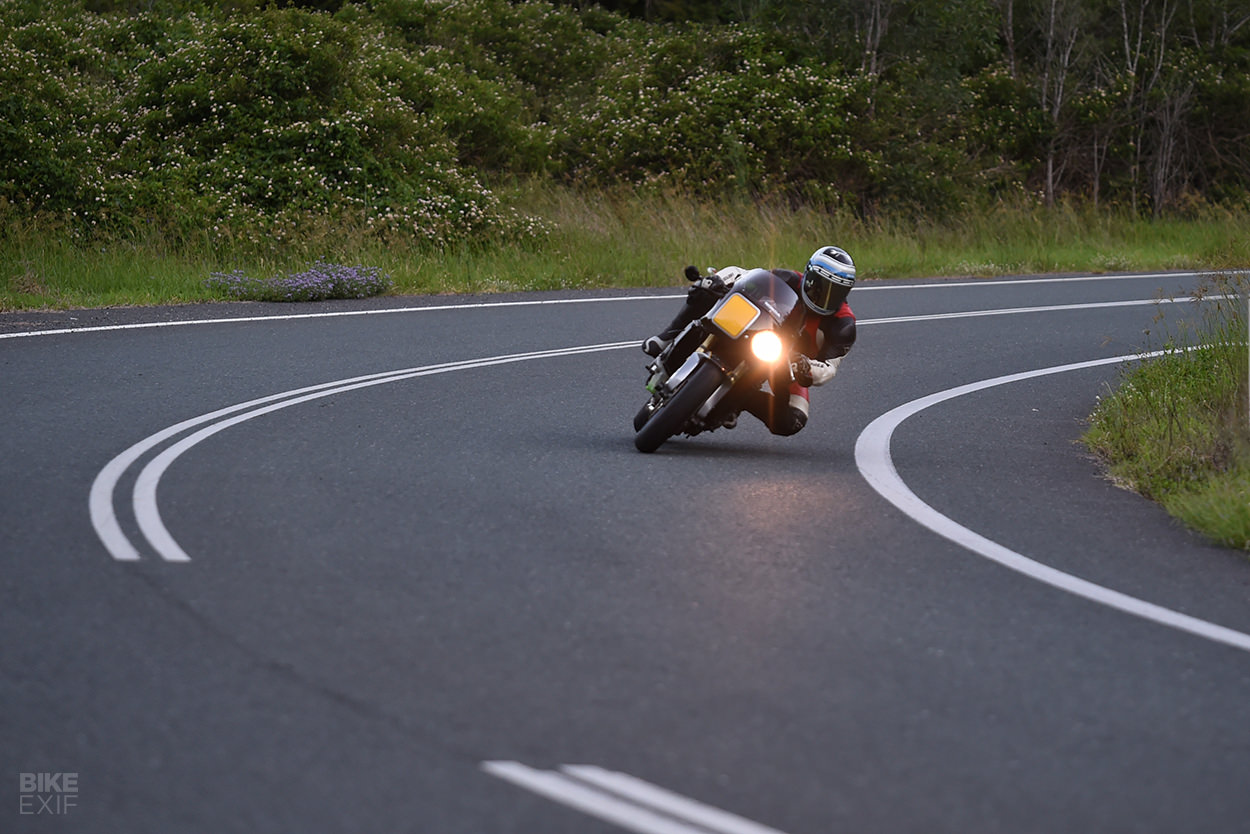 “The beauty of modern bikes is that they are already amazingly fast and handle great, without resorting to major upgrades—unless you’re a really fast rider, of course!” says Francis. “So you can just ditch the unnecessary, add rear sets, an exhaust, braided brake lines, and a good set of soft compound rubbers…and there you go!”

Speed and style in equal measure—what’s not to like? If you’re based in Australia and fancy blasting this stunning machine around your local backroads, drop Francis a line—it’s for sale for a very reasonable AU$10,500. 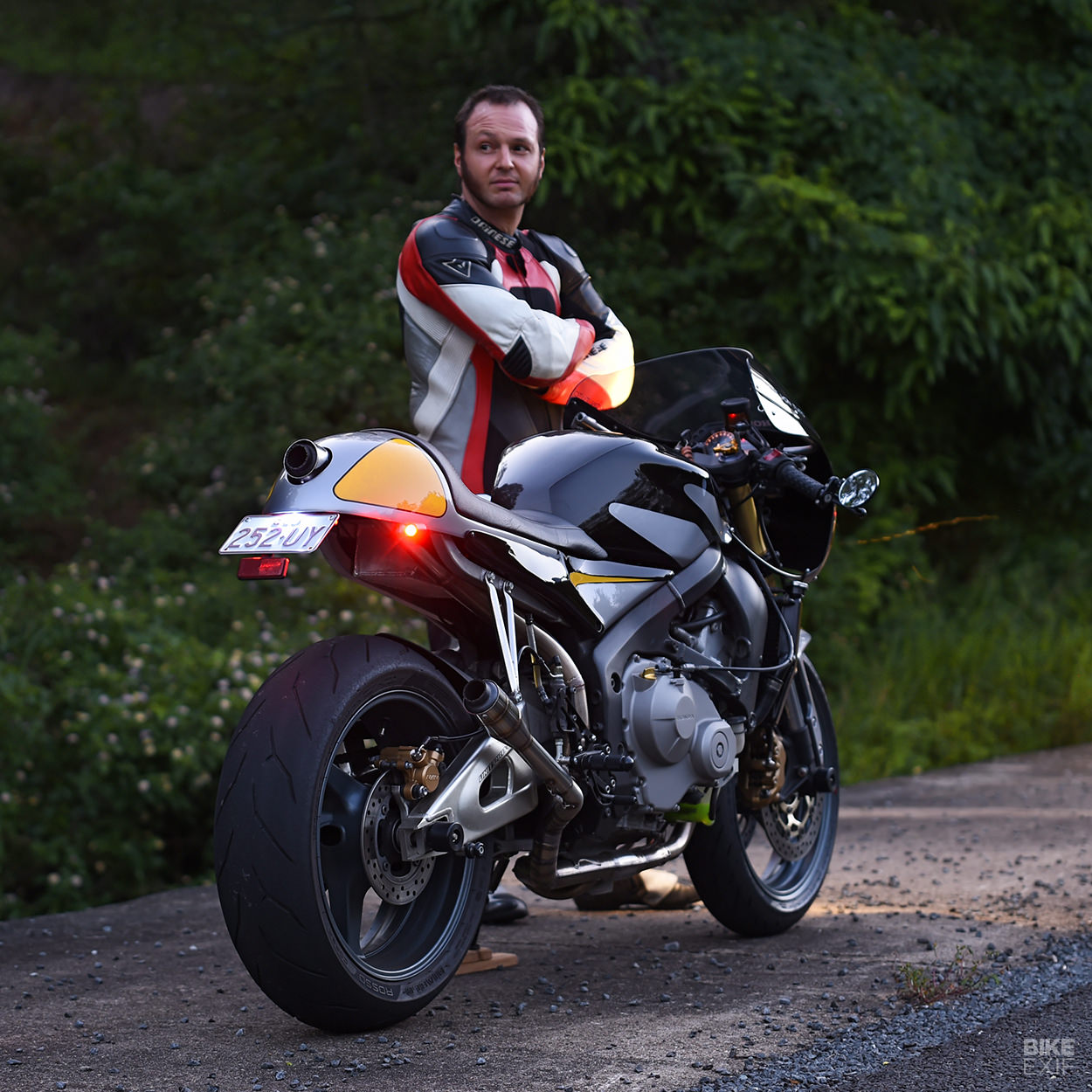