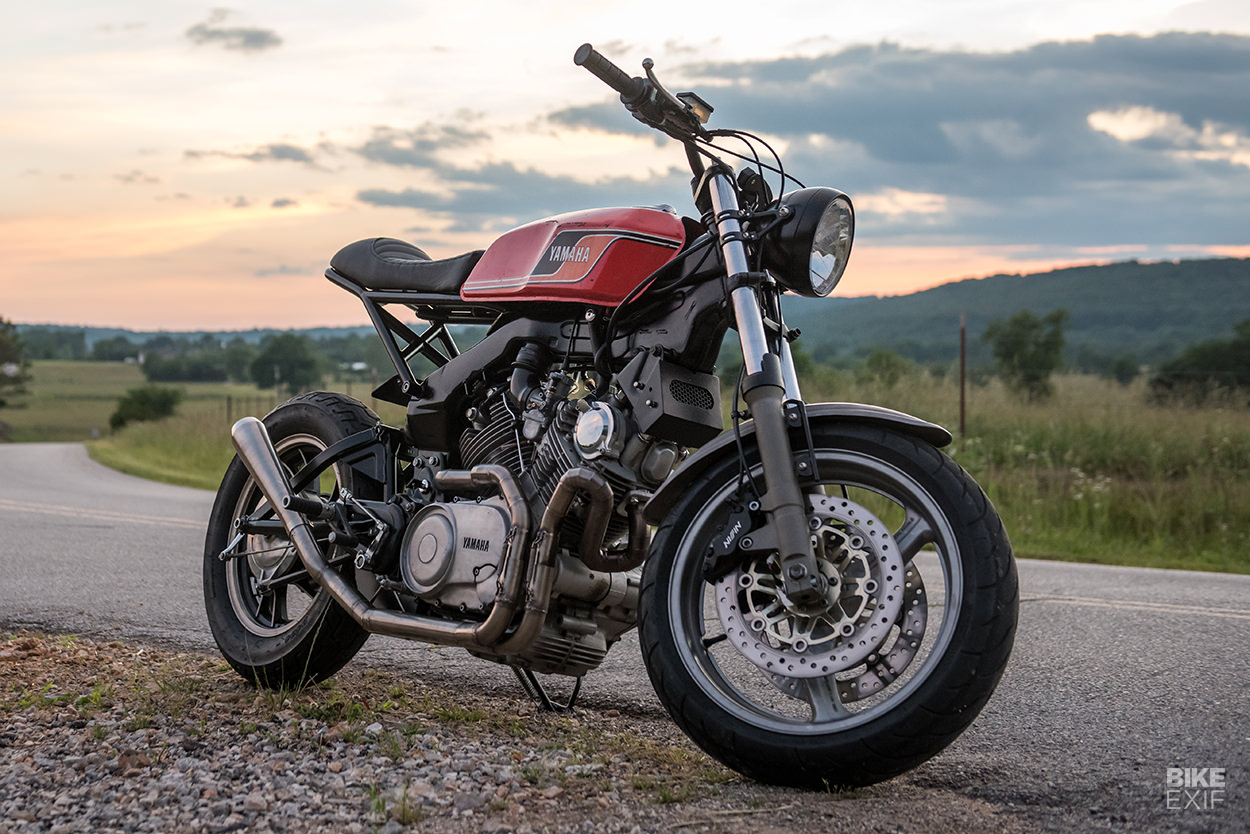 The Yamaha Virago is one of those bikes that just keep on giving. Yamaha’s V-twin cruiser first popped up in the early eighties, and by the time it disappeared from showrooms in 2007, multiple variants had been built—from a teeny 125 to a whopping 1100 cc.

The shaft drive XV750 was one of the most popular variants. This terrific custom dials down the cruising aspect and ramps up the sportiness, and comes from enthusiast Kevin McAllister, who impressed us five years ago with a very clever Yamaha XS650 scrambler. 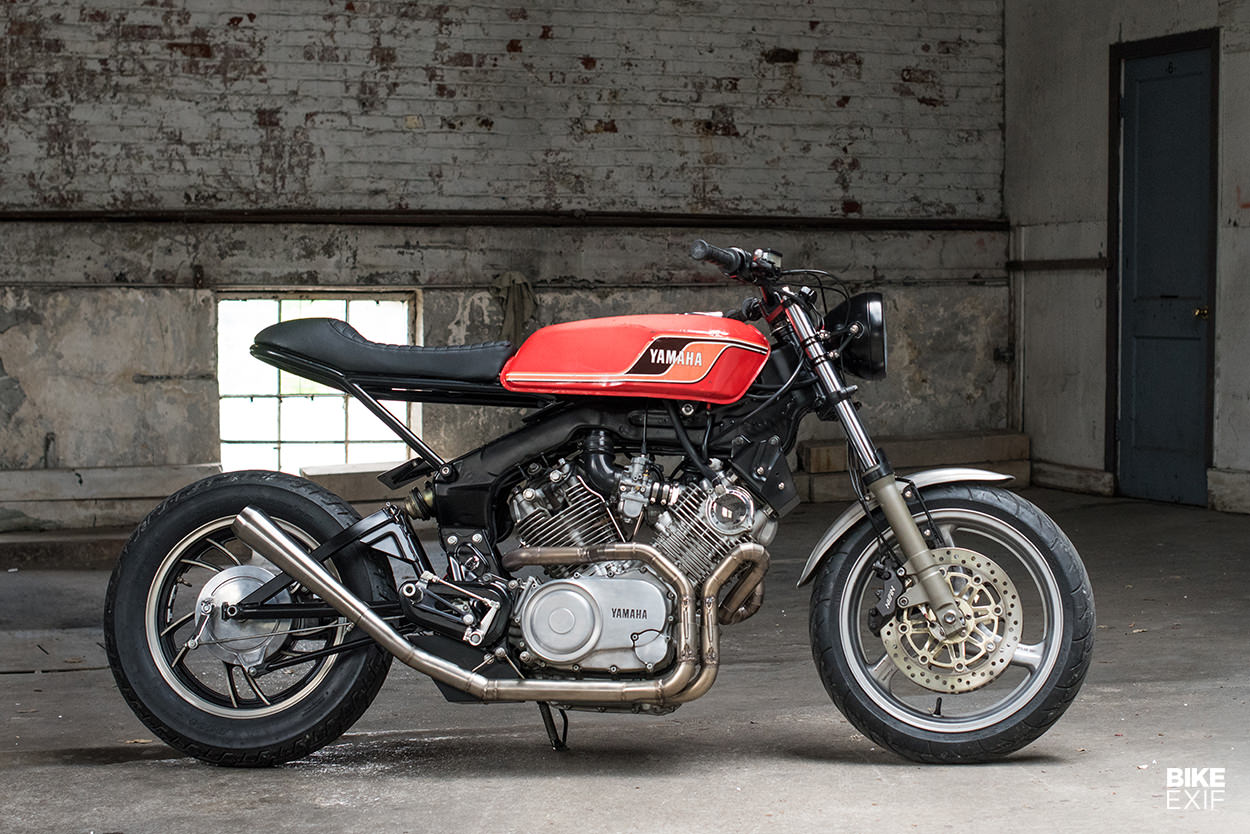 In those days Kevin lived in Texas, and that’s where he came across this 1983 model. “My friend Jerry arrived with a Virago that he’d found abandoned in a parking lot, and then bought,” Kevin recalls. “It was your typical 80s Virago, with highway pegs and leather saddlebags, accompanied by a fine chromed sissy bar.”

Jerry’s brief to Kevin was simple: “Make it fun, and look good.” So Kevin tossed everything except the engine, rear end and the main frame. He planned on completing all the fabrication and (even the sewing) in his own shop. 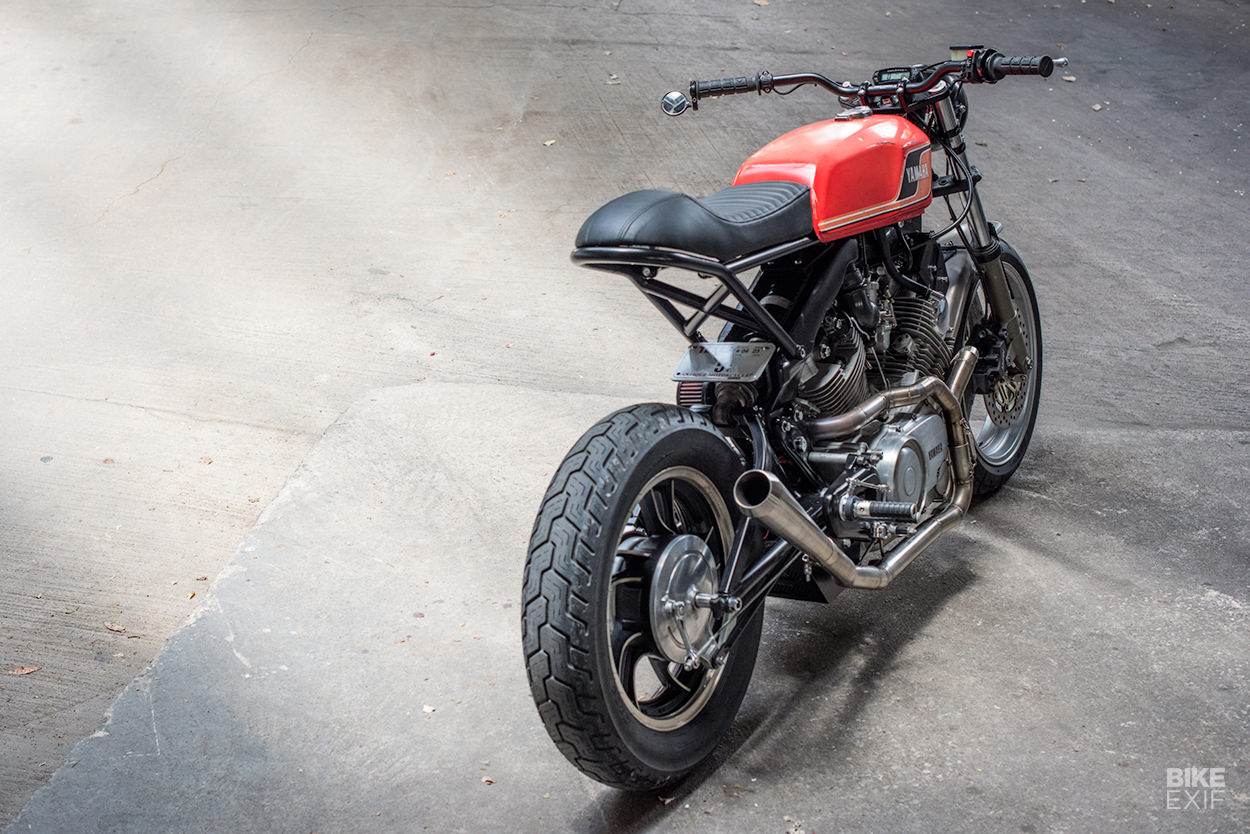 Kevin took the Virago apart and mocked up the tank and subframe while living in Austin. Then he boxed up the bike, along with all his tools, and moved 500 miles north to Fayetteville. “I started my general contracting business, bought a house, built out my new shop, and started back on the bike after-hours.”

Major surgery followed. The front end is from a 2003 Honda VTR1000F, which gives the XV750 modern stopping power but retains forks that look appropriate for the era. 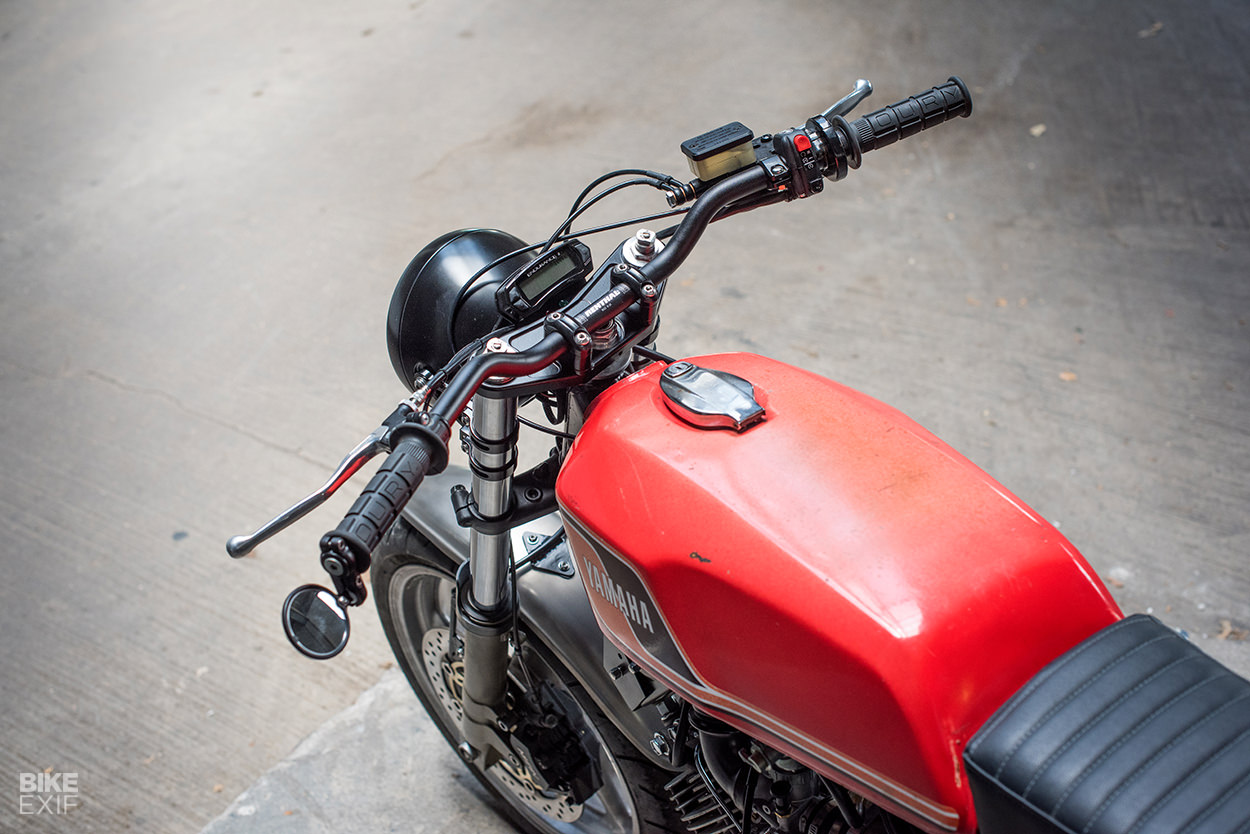 The top triple is an ABM Superbike item from Germany, and permits standard handlebar mounting brackets—as opposed to the factory VTR clip-ons.

Kevin has chosen Renthal bars, and outfitted them with Oury grips, a CRG Blindsight mirror, and a throttle and stop-start switch from Motion Pro. 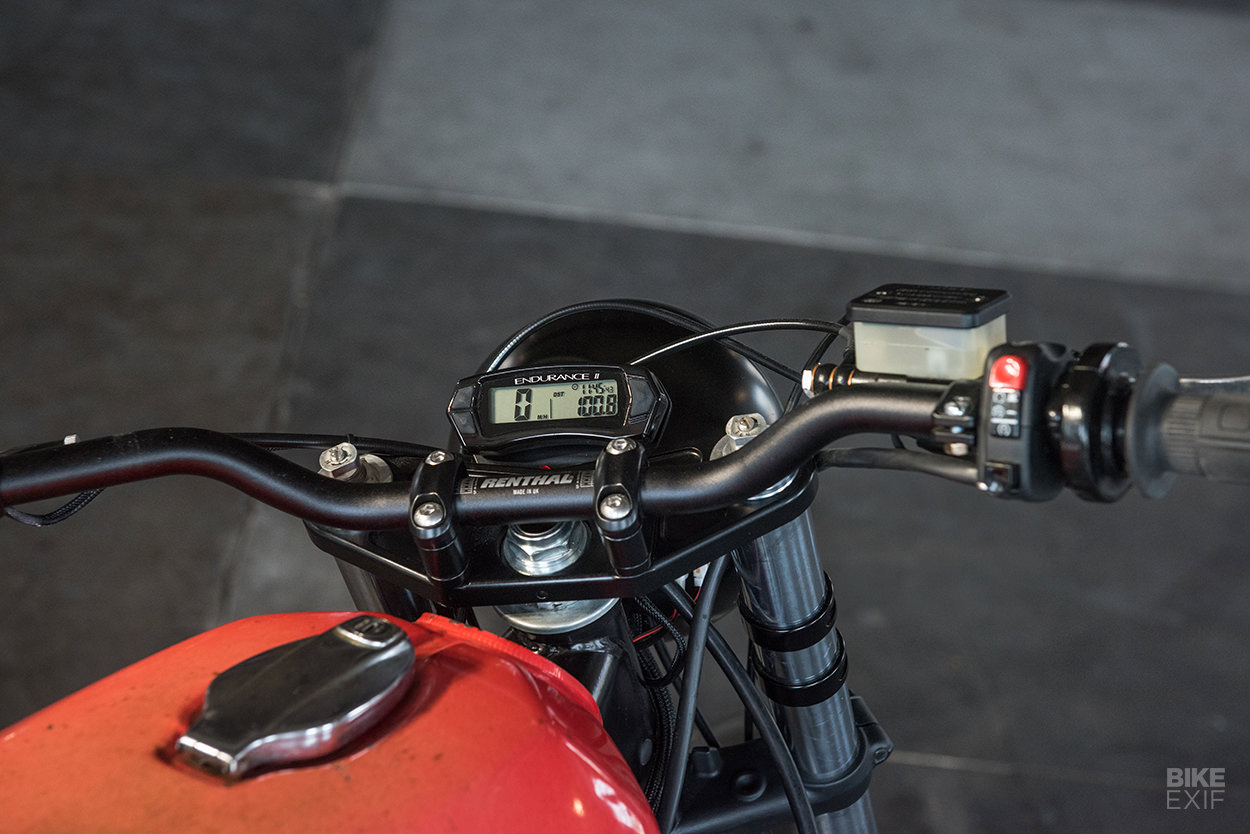 The front brake master cylinder and clutch lever are from Magura, and the instrumentation is ultra-modern: a Trailtech Endurance II digital dashboard, fixed via a bracket mounted to the top triple. A simple but classy bucket headlight from LSL leads the way, controlled via a tiny button by the clutch lever.

A custom welded box behind the engine hides a Shorai lithium battery, the starter solenoid and the electronics. “This keeps everything nice and tucked up out of the way,” says Kevin. “I also used some perforated metal, so that air is drawn through to keep the reg/rec cool.” 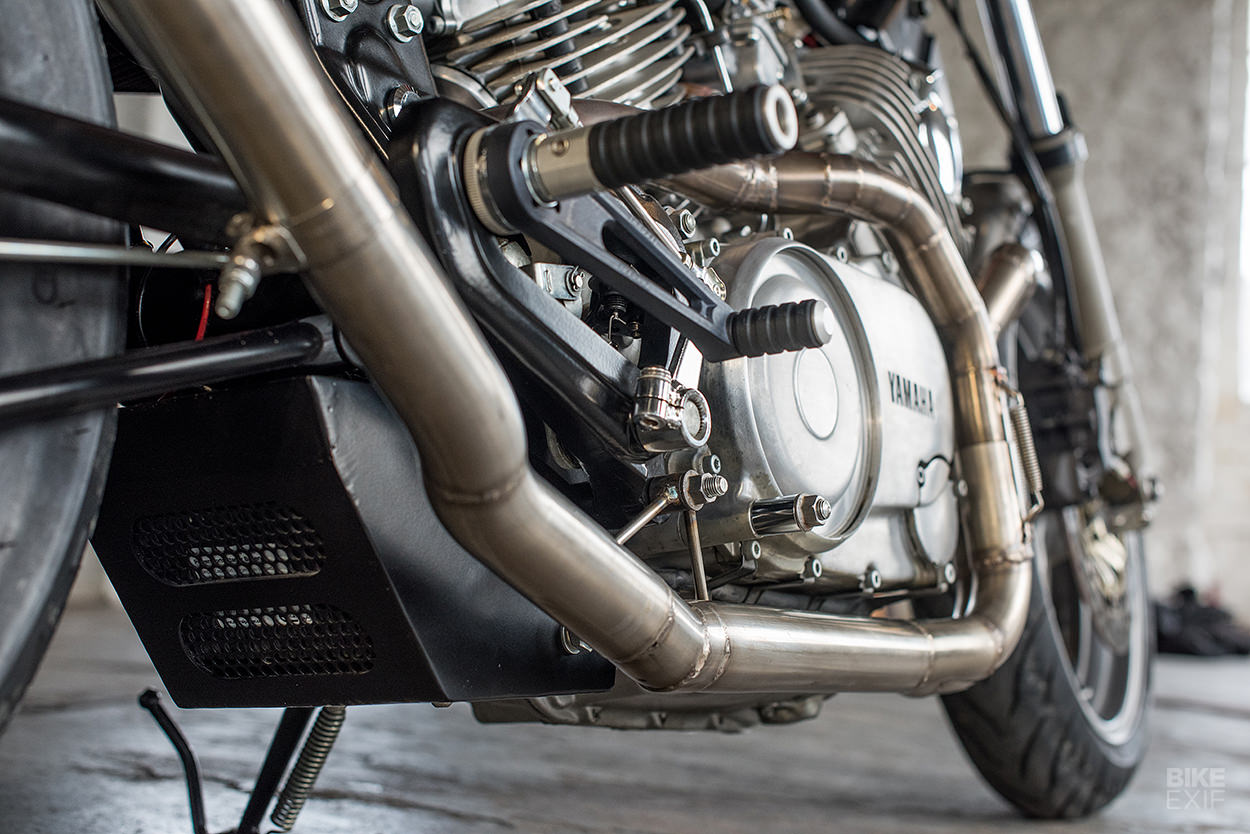 The fuel tank is a 1977 RD400 unit, complete with a touch of patina, and completely changes the vibe of the Virago for the better.

Kevin welded up custom mounts to get it to fit, and then bent the rear subframe hoop and ran it under the tank to support the rear mounts. (Fresh black powder from Wayne’s Powder Coating up the road in Springdale has made the revised frame look as good as new.) 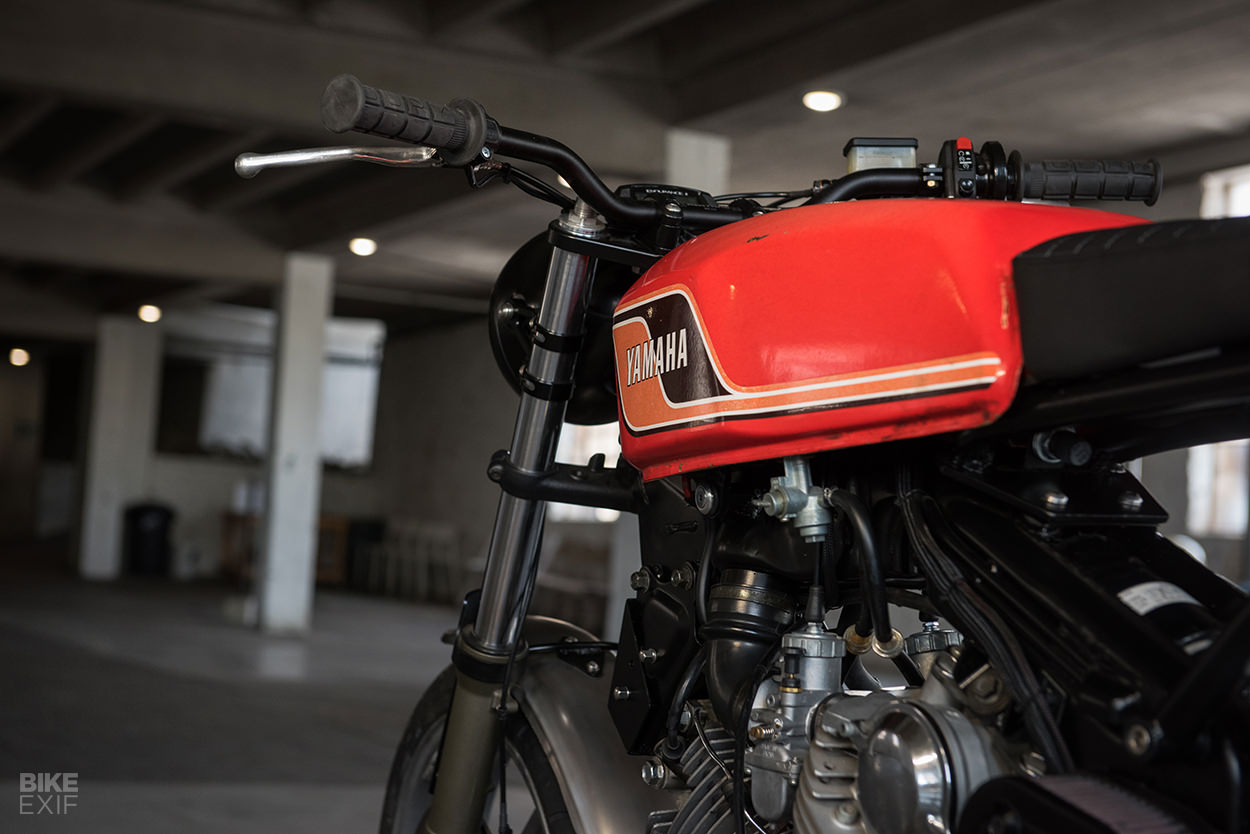 “The Schrader valve for the rear shock and K&N crankcase vent are mounted under the tank at the rear, and accessible from the underside for any shock adjustments that need to be made,” he says.

The seat pan is all-aluminum, attached with quarter-turn fasteners. It’s topped with high-density seat foam wrapped in vinyl and stitched together in the shop. 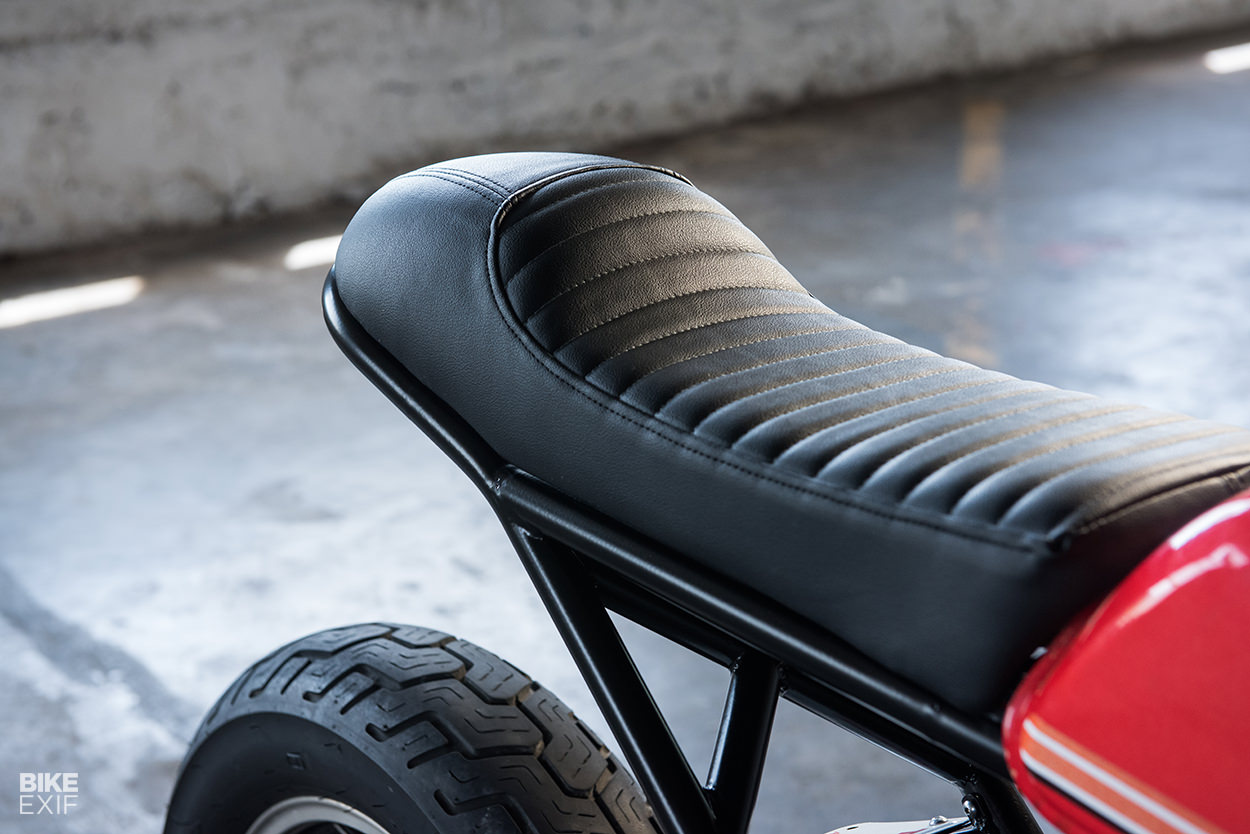 “I wanted the seat line to flow from the tank and have a slight bump at the rear, but not a large ‘cafe style’ hump. So I shaped the rear of the seat with the cowl from an old Ducati S2R.” Revival Cycles supplied a ‘Supernova’ LED taillight (along with the reg/rec, a new ignition switch and a starter solenoid with built in fuses).

On the engine front, Kevin has swapped out the stock Hitachi carbs for Mikunis, and fabricated a stainless steel exhaust system terminated with a stainless cone muffler. 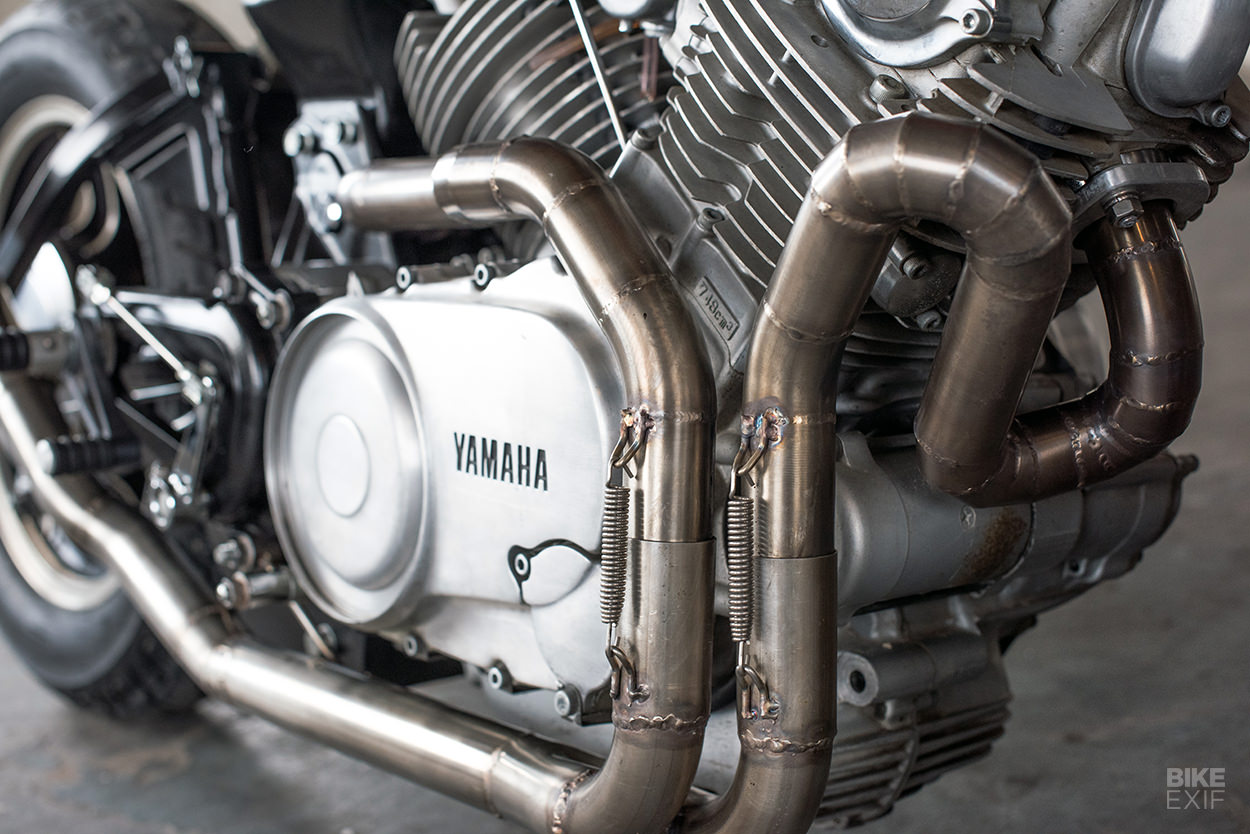 “The twist in the front exhaust pipe was to add equal length, so that the two headers match up before going into a single larger pipe,” he says. “The muffler then kicks upward to align with the subframe, and the dual Mikunis are custom jetted for the intake/exhaust.”

Next up was fixing the position of the footpegs to create a sporty rider triangle, repositioning the mounting points and installing Tarozzi rearsets. “The factory passenger mounting location that is often used in café builds is too far back for comfort,” says Kevin. 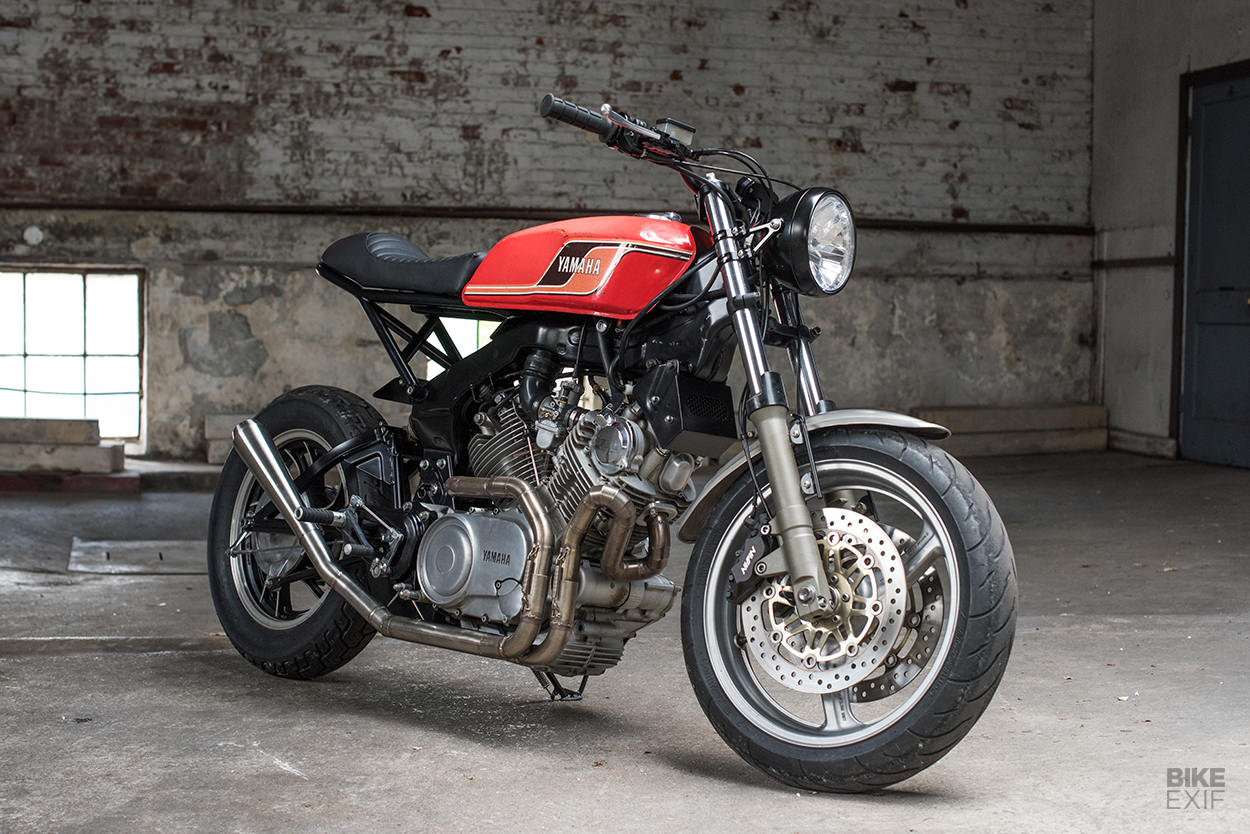 After cutting down the front fender, the XV750 was ready to hit the road. “The bike is an absolute blast in the hills and curves. The low-rise Renthal bars and new rearsets ease the riding position, and make for a comfortable ride. After a 100-mile ride through the Ozarks, I’m pleased with how everything came together,” says Kevin.

In two weeks, the XV750 will be sent back to Austin for Kevin’s friend Jerry to enjoy. He’s been waiting a while—but like they say, good things take time. 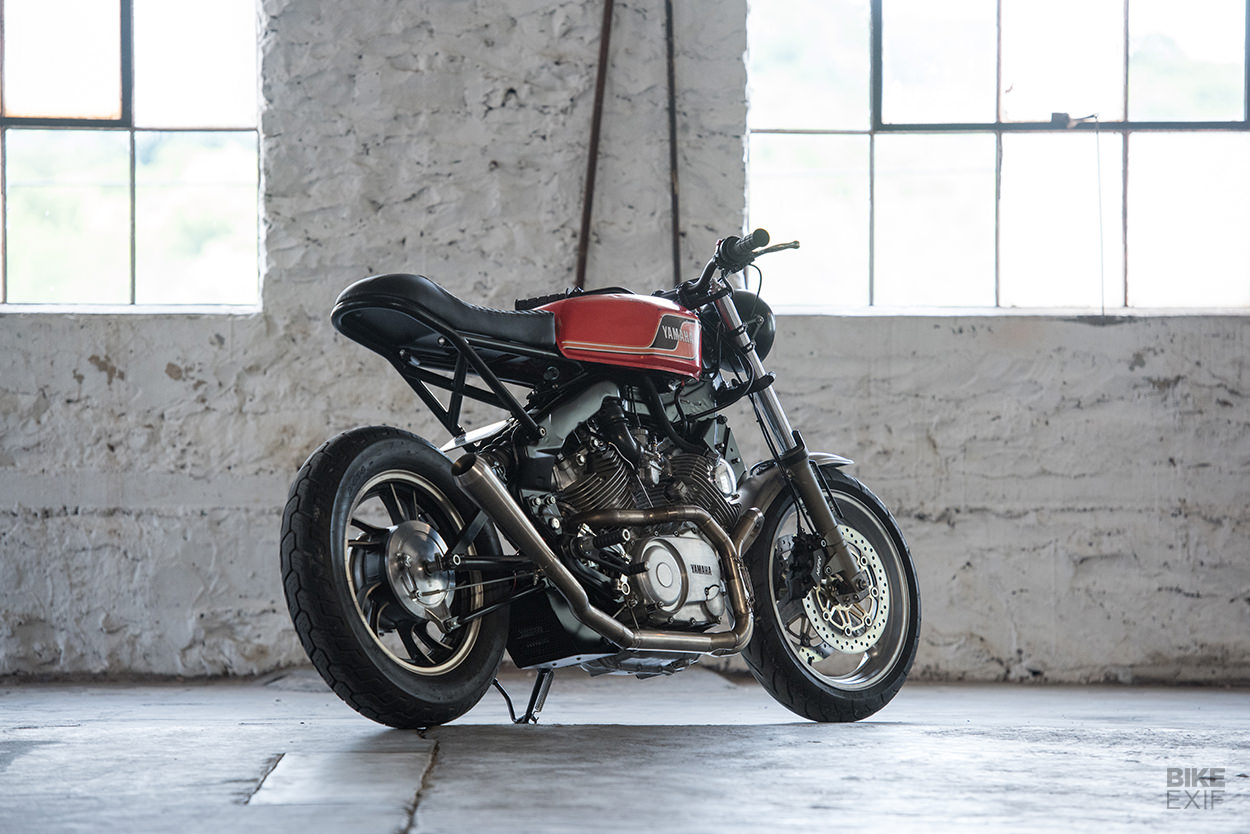