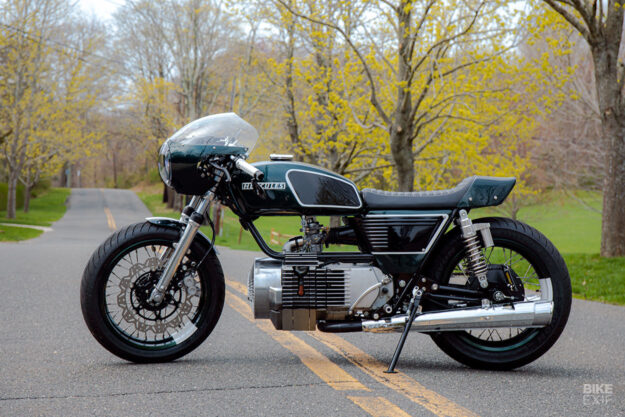 The motorcycling world is replete with mechanical oddities that never really caught on. Think hub center steering, two-wheel drive, and even automatic transmissions. But top of the list has got to be the rotary engine. Despite its limited success in the mainstream car world, there are plenty of folks who have tried to make a Wankel-powered motorcycle.

Suzuki is probably the best known, with the RE5. But around the same time, the Dutch company Van Veen was also experimenting, and so was the German outfit Hercules—with its imposing W-2000.

This is the first time we’ve seen a custom Hercules, but it was built by a man who will be familiar to regular visitors of this site: Greg Hageman. Greg made his name with Virago customs, but these days, he can turn his hand to just about anything with two wheels.

That made him the perfect choice for client Alessandro Bonomi, who was intrigued by the idea of a first-of-its-kind rotary restomod. 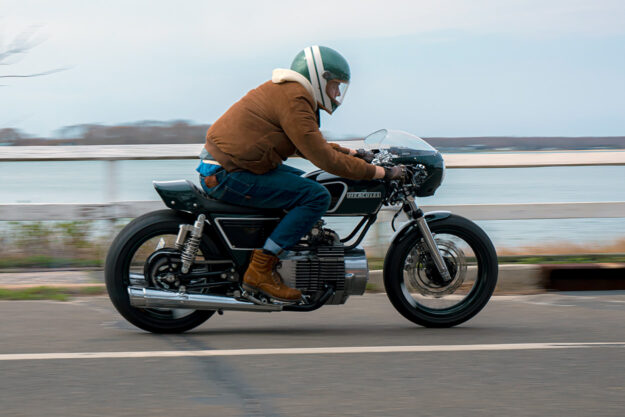 Alessandro is particularly fascinated by the story of Hercules: “There’s something magical about forgotten automotive dreams and relics,” he ruminates. “One notion was the idea that rotary engines could have been the future of motorcycles.”

“On paper, the thought appeared to be genius. A system that would reduce vibration and provide uniform torque, while providing considerable weight savings. Unfortunately, it was the right idea but not the right time.” 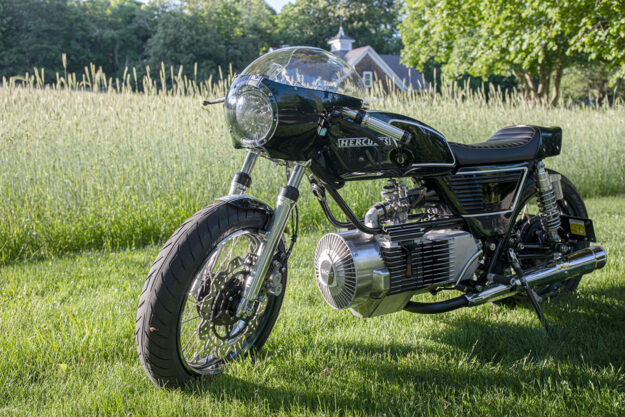 Finding the right donor bike was paramount, because resuscitating or repairing a poor condition rotary engine from the 70s would be tricky. As luck would have it, Greg’s father-in-law happened to have an ultra-rare Hercules W-2000 in his collection. And believing in what Greg and Alessandro were setting out to do, he was willing to part with it.

“This human and emotional connection made the build that much more special,” says Alessandro. So I dedicated the bike and build to my own father, titling the adventure ‘Project Andy’.” 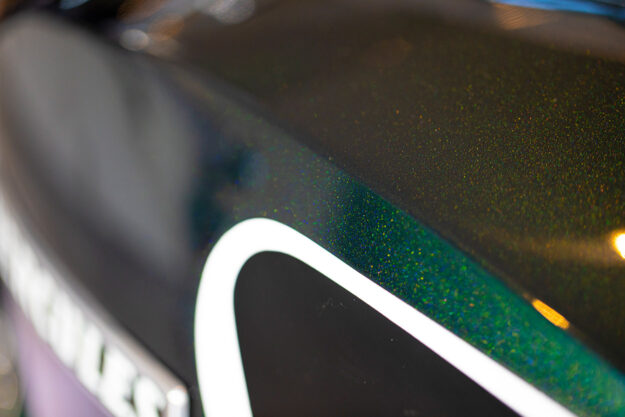 Alessandro pitched his vision to Greg, with ideas around design and performance upgrades. Because even by 1970s standards, a Hercules W-2000 is quite rustic—and the 294cc Sachs air-cooled single rotor engine is a pretty basic mill, despite the unusual technology.

“I saw this as a positive, because we had a ‘pure,’ early industrial rotary engine, undisturbed by unnecessary complexity. It was the parts surrounding the engine that needed the most attention.”

The Hercules had predictable if somewhat slow handling, so Greg has upgraded the suspension with Yamaha XS650 forks. These have been overhauled with new tubes and seals, plus innards from Race Tech—including Gold Valve cartridge emulators.

The hubs are XS650 too, both front and rear, and laced up to new 17-inch rims from Buchanan’s. They’re 3.5 inches wide at the front and 4.25 at the back, and laced up with heavy duty stainless spokes. The tires are Avon MKII, with a period-correct tread pattern matched to modern construction. 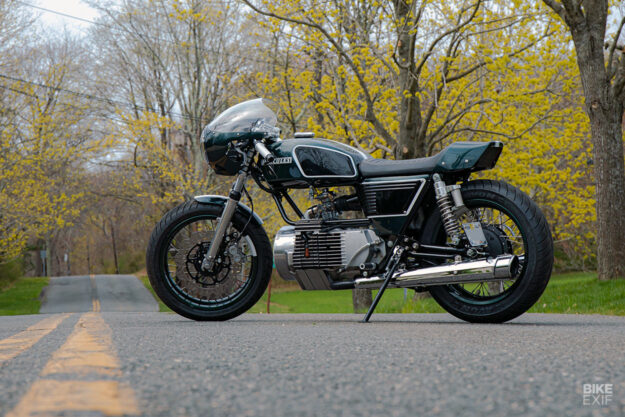 There’s no shortage of braking power though, because Greg has installed the front calipers from a 2003 Yamaha YZF-R1 using billet adaptors, along with 320 mm Brembo rotors. They’re fed by a Magura HC1 radial master cylinder.

At the rear, there’s an XS650 drum—upgraded with new shoes from EBC—flanked by a pair of custom-spec Hagon Nitro shocks.

The finishes are top-notch, from the steely glint of the CNC-machined Motogadget grips to the newly-plated hardware and the stunning metalflake paint, which was shot by Tampa-based Moe Colors.

The graphics on the stock tank are inspired, mirroring the shape of the side covers, and everything else has been neatly refinished in powder or Cerakote by Schwarz Powder Coating in Illinois. 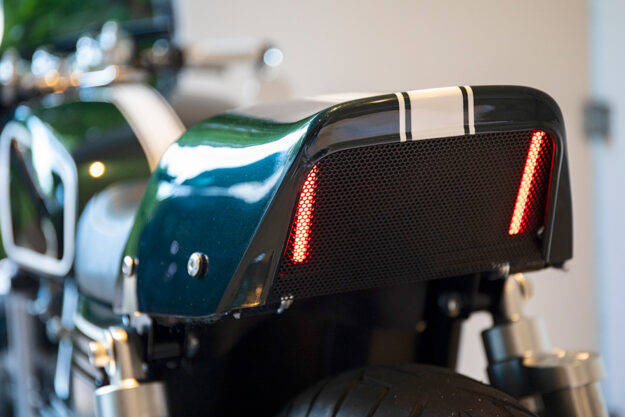 In factory form the Hercules looks a little stodgy, but Greg has smartly lightened the aesthetics with a new seat upholstered by Tuffside, and a waspish little tail unit. He’s also added a classic quarter-fairing at the front, which houses a Custom Dynamics ProBEAM LED headlight behind a clear dome.

As always with builds like this, a lot of the work is hidden. That includes the new electrical system, which should banish any vestiges of vintage unreliability. The hidden goodies are mostly Motogadget componentry, with an mo.unit Bluetooth control box feeding out to a speedo, switchgear and turn signals from the same manufacturer. 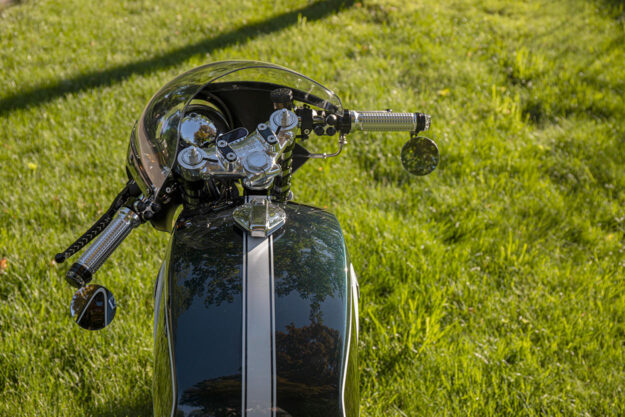 This W-2000 is one of those builds that could have gone horribly wrong, but Alessandro is very pleased with the result.

“It’s like no bike I’ve ever ridden,” he enthuses. “She’s light, nippy, and unexpectedly fast. But more than anything, there is a different energy when you hit the throttle … the bike almost disappears from beneath, there are no real vibrations, and you simply find yourself gliding effortlessly.”

We’d give anything to swing a leg over this one and see what smooth rotary power feels like in a lightweight, updated chassis. Alessandro is the first to admit that the Hercules project is ‘idealistic,’ but his dollars and imagination have also turned the spotlight back onto a lost moment in motorcycle history. 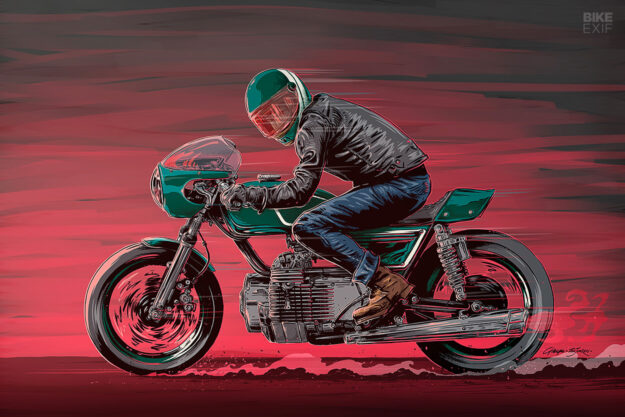