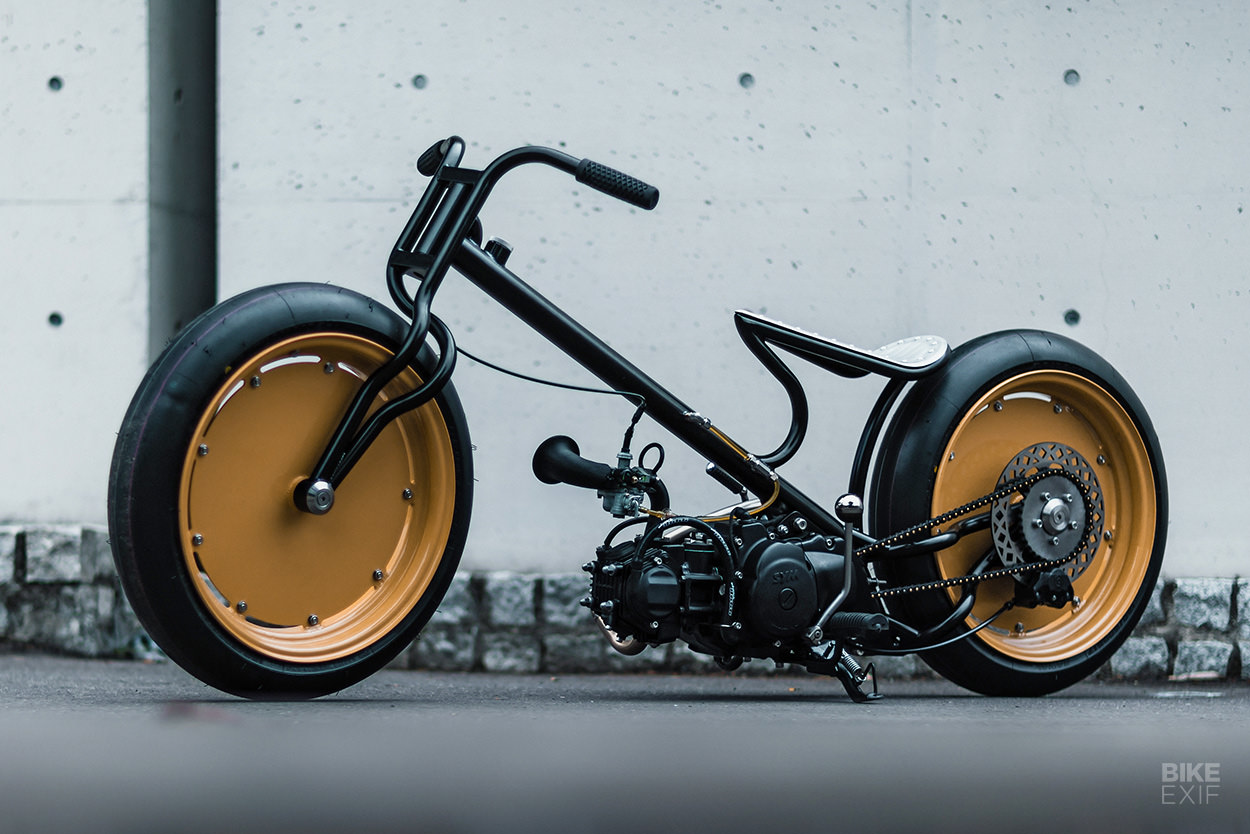 Few bikes can claim the cult status of the iconic Honda Cub. The adorable underbone scooter has been in constant production since 1958, with over 100 million units made. And the design has been cloned countless times.

This custom scooter from Taiwan contains Cub DNA, but you’d never guess—because it’s stretched to breaking point. It’s the latest build from AFS Custom Bikes of Tainan City, and uses the engine from a Cub clone made by SYM. 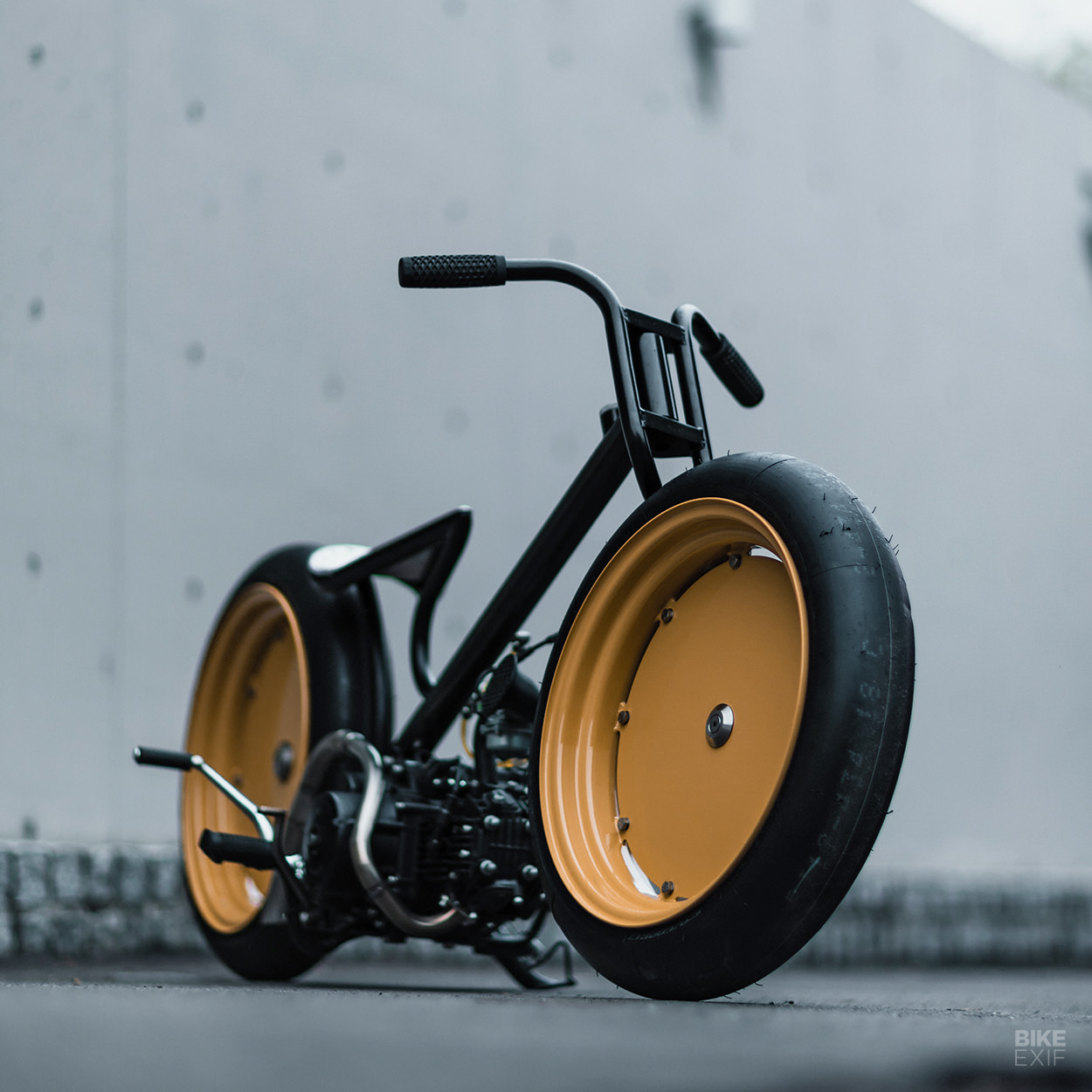 It’s a reincarnation of the classic Cub vibe, six decades later and from an alternate universe.

“The Honda Cub was released over half a century ago and has never gone out of style,” says the shop’s founder, who also goes by AFS. “I think that’s really cool. I wanted to keep those basic lines, but maybe add a little bit more modern style to it.” 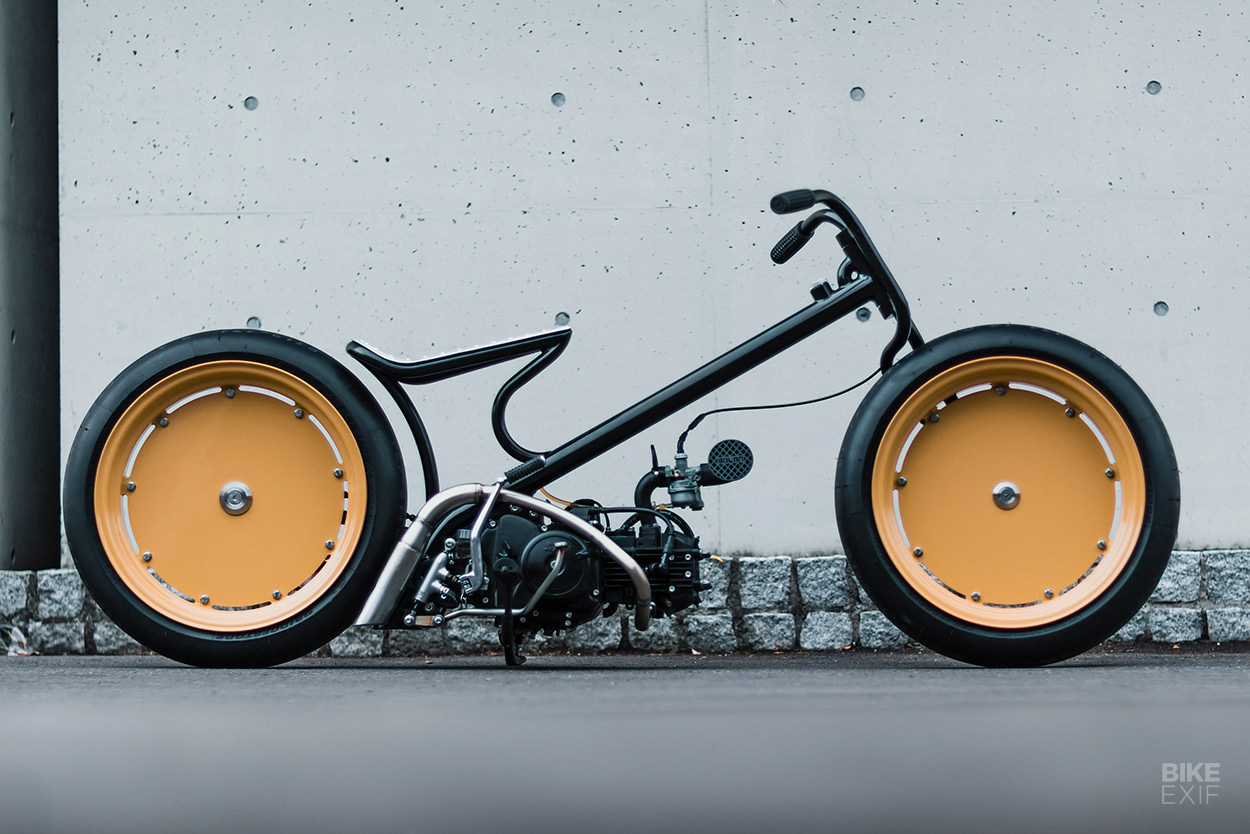 From there, the concept evolved into something a little more slammed and stretched, because the shop’s customer is a hot rod fanatic. There’s no suspension, just one brake and nothing to make it street legal—but that’s not a problem. Style was always going to trump practicality on this project.

The headline feature here is the scooter’s handmade chassis. It’s been built from steel tubing, with the main backbone doubling up as a fuel tank. AFS built a makeshift fuel gauge on the left side, and a tidy knurled aluminum gas cap up top. 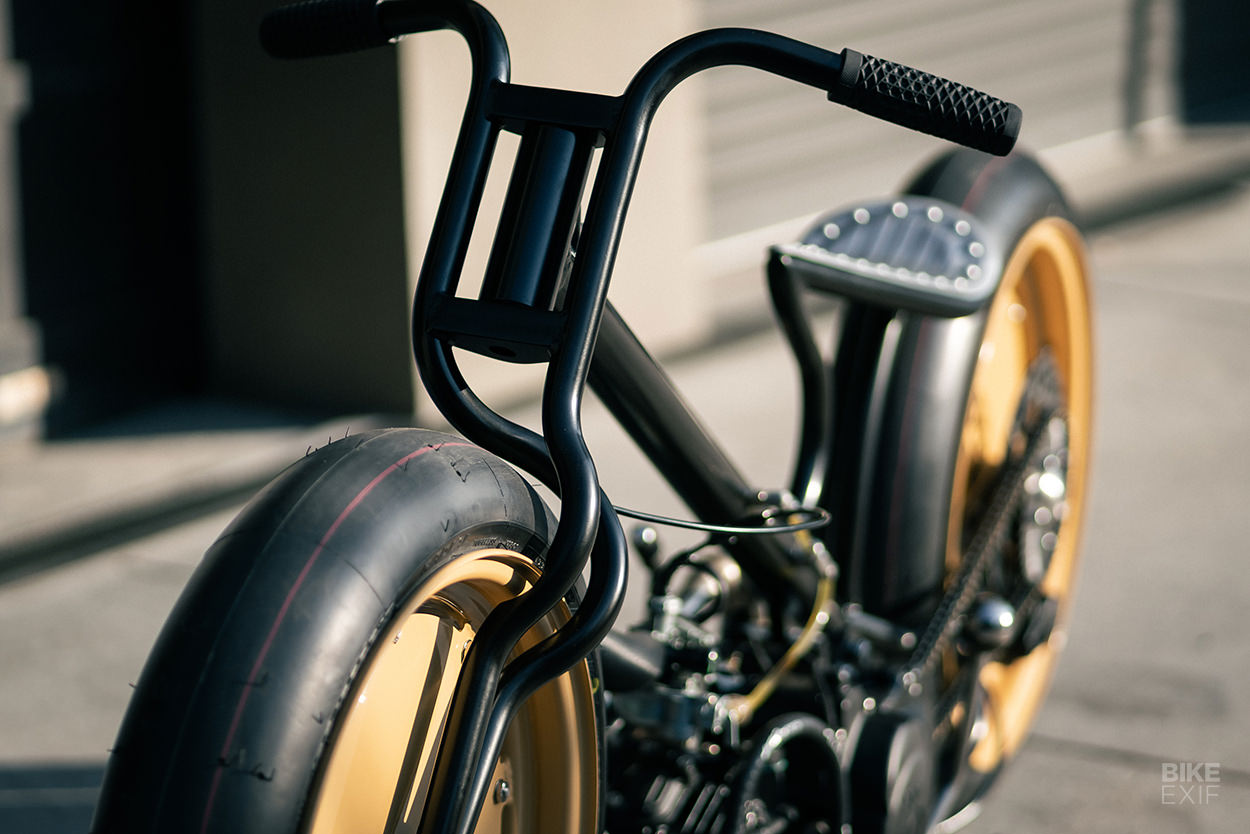 It’s a remarkably cohesive and fluid design—particularly the single-sided fork and rigid rear end. Both ends curve tightly around the tires and converge at the axles. The front end is neat too, running seamlessly into a narrow set of bars.

There’s nothing in the cockpit beyond a pair of grips and an internal throttle. 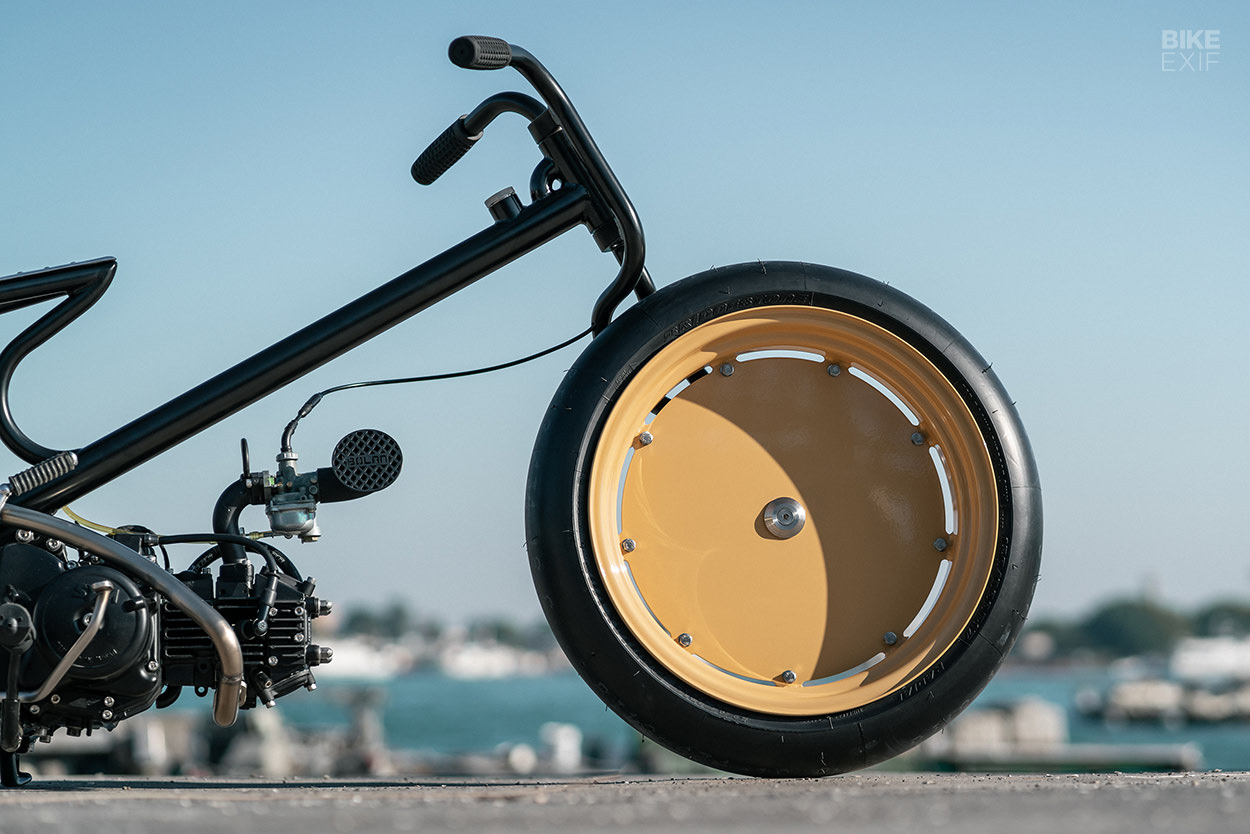 The 17” disc wheels are custom too, but they weren’t totally built from scratch. AFS started with a pair of car spare wheels, then cut out and redesigned the center sections. They’re wrapped in Bridgestone slicks.

There’s a single disc brake at the back—a Brembo caliper operated by a Frando master cylinder. AFS built it in behind the rear sprocket, leaving the right side of the wheel completely clear. 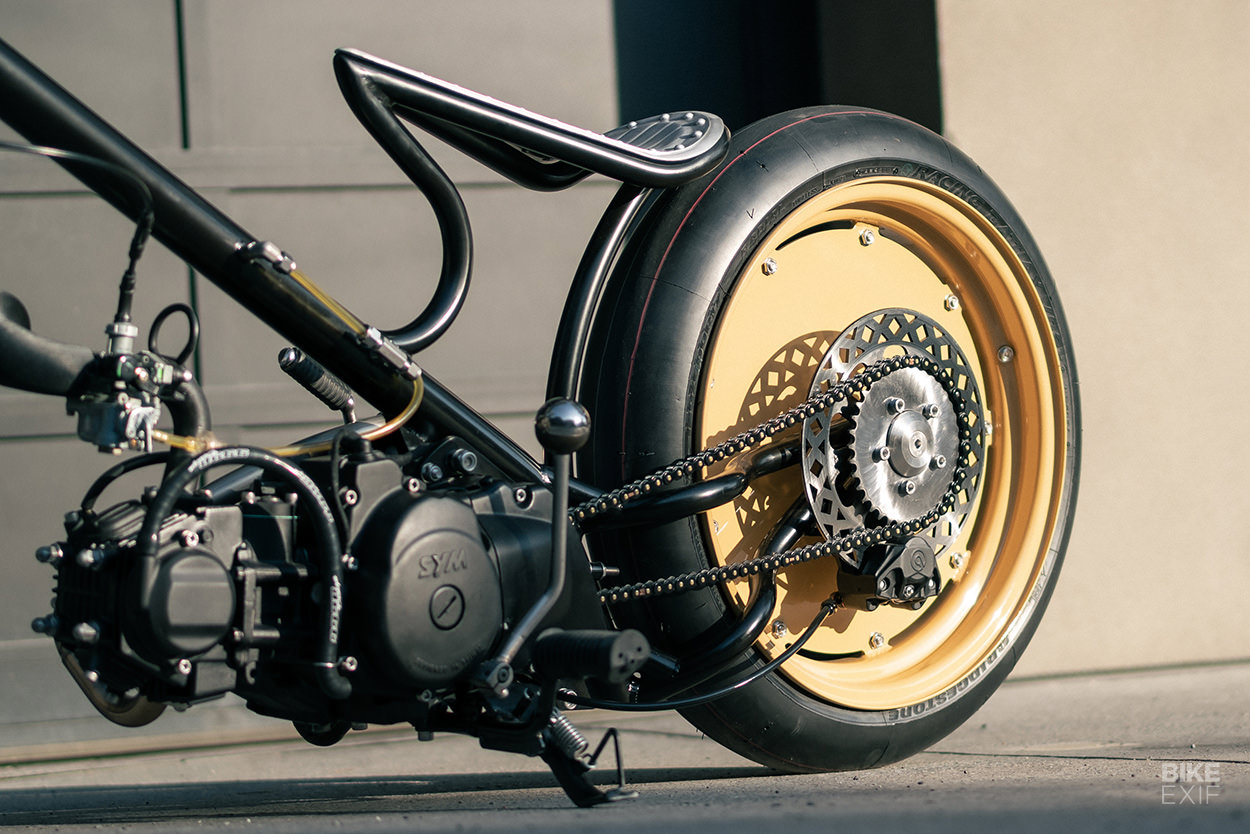 The scooter’s 90 cc SYM motor has three gears and no clutch, which meant AFS could simplify the design even more. There’s just a rear brake lever on the right, and a hand shifter low down on the left.

AFS built the custom air intake too, and the stainless steel exhaust. It’s an interesting design that loops down to the rear wheel, and exhales via a pair of holes in the side of its muffler. 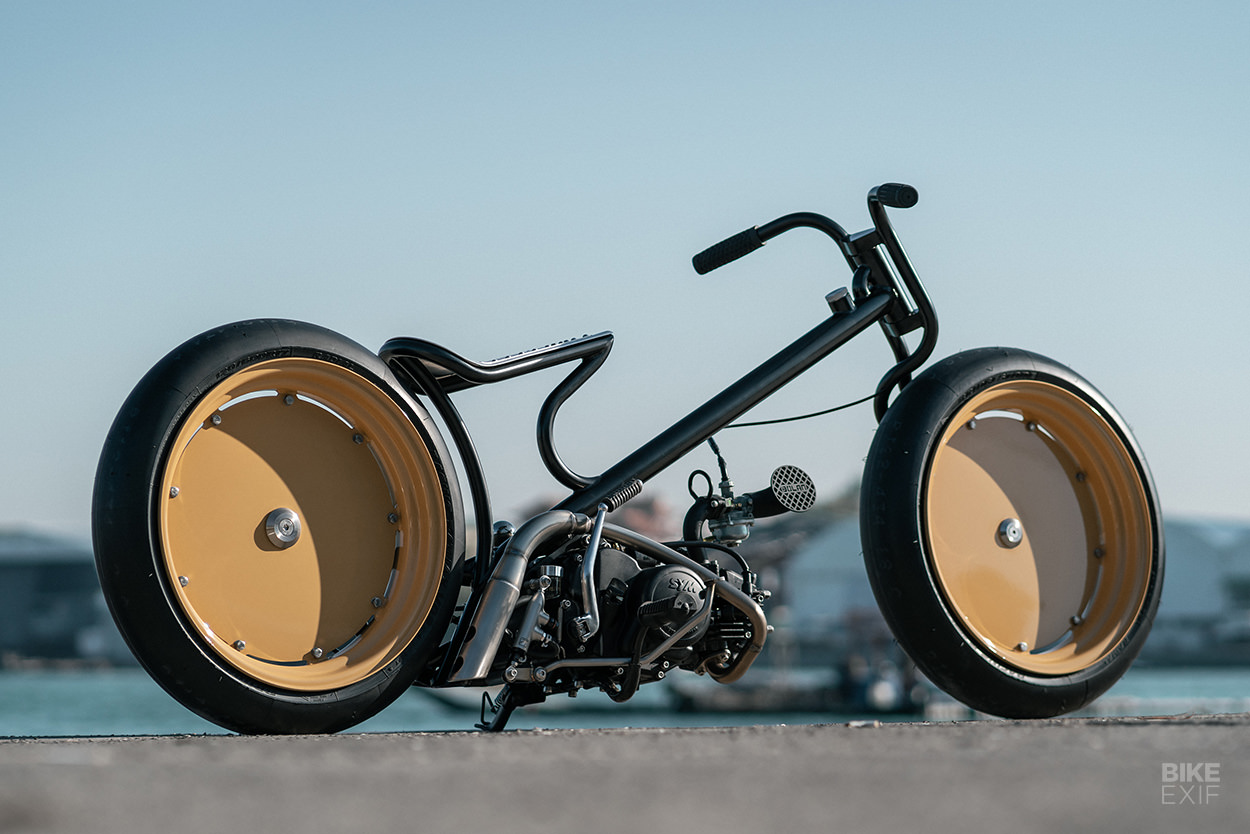 With blacked-out finishes and gold wheels, AFS have nailed the hot rod vibe here. The final piece of the puzzle is the bobber-inspired seat, which was hand-shaped from aluminum. Combined with the lack of suspension it’s sure to be a harsh ride.

But given that the fuel tank holds less than half a gallon of fuel, and the scooter isn’t even remotely street legal, you won’t be going very far anyway. 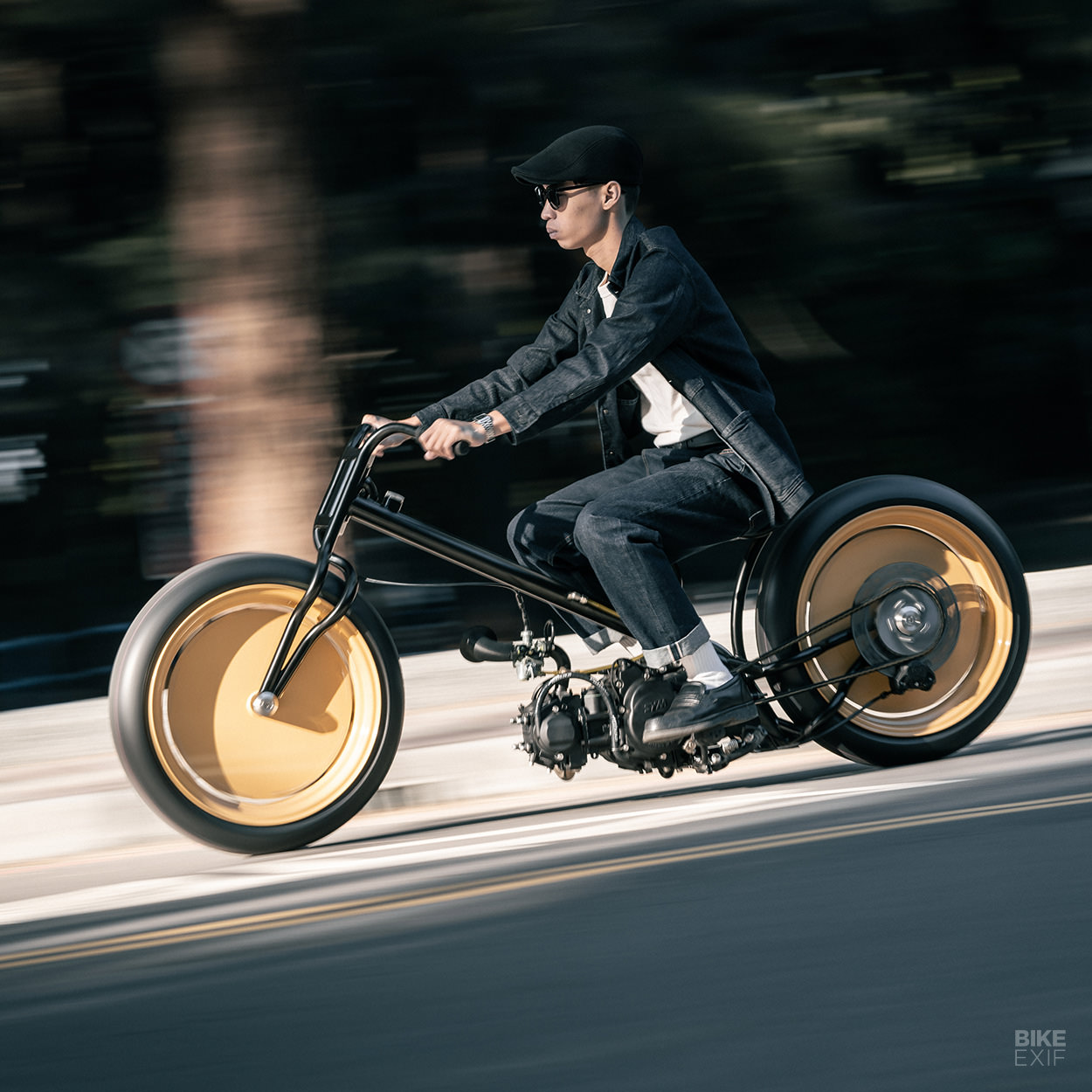