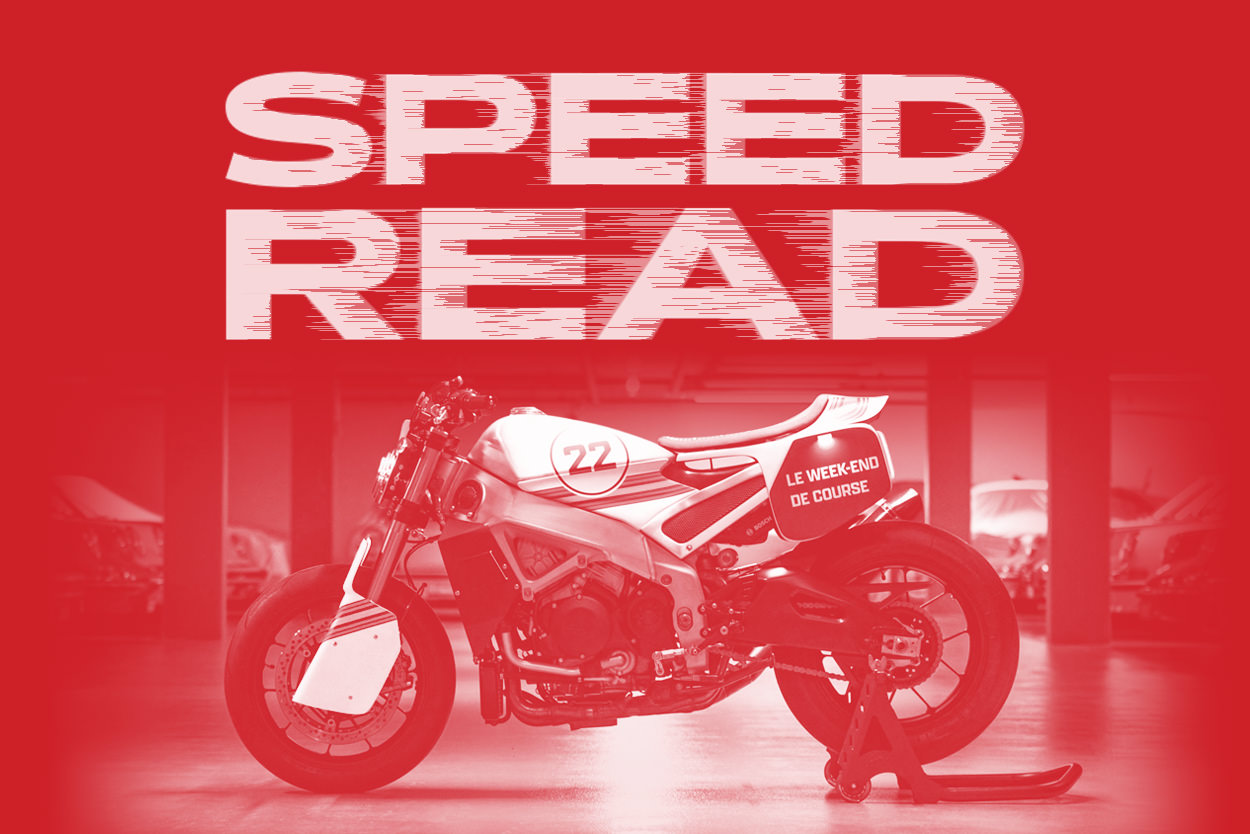 We’re casting the net far and wide this week. There’s a brutal Aprilia Tuono V4 from Switzerland, a Harley cafe racer from Japan, and a new bike from the American small-batch manufacturer Janus. Plus Union Motorcycle Classics are raffling off a jaw-dropping Gary Nixon tribute Triumph.

Aprilia Tuono V4 by Le Weekend De Course The 175 hp Aprilia Tuono V4 isn’t the most obvious choice for customization, but that hasn’t put Gwenael Barthélémy off. He’s owned and raced them for years—and this is the third one he’s customized.

Operating as Le Week-End De Course, Gwenael’s been building bikes in Switzerland for five years now, always working with a hand-picked network of craftsmen. This project was easier than the last, because not only did Gwenael know what to expect, but he had a stack of leftover parts too. 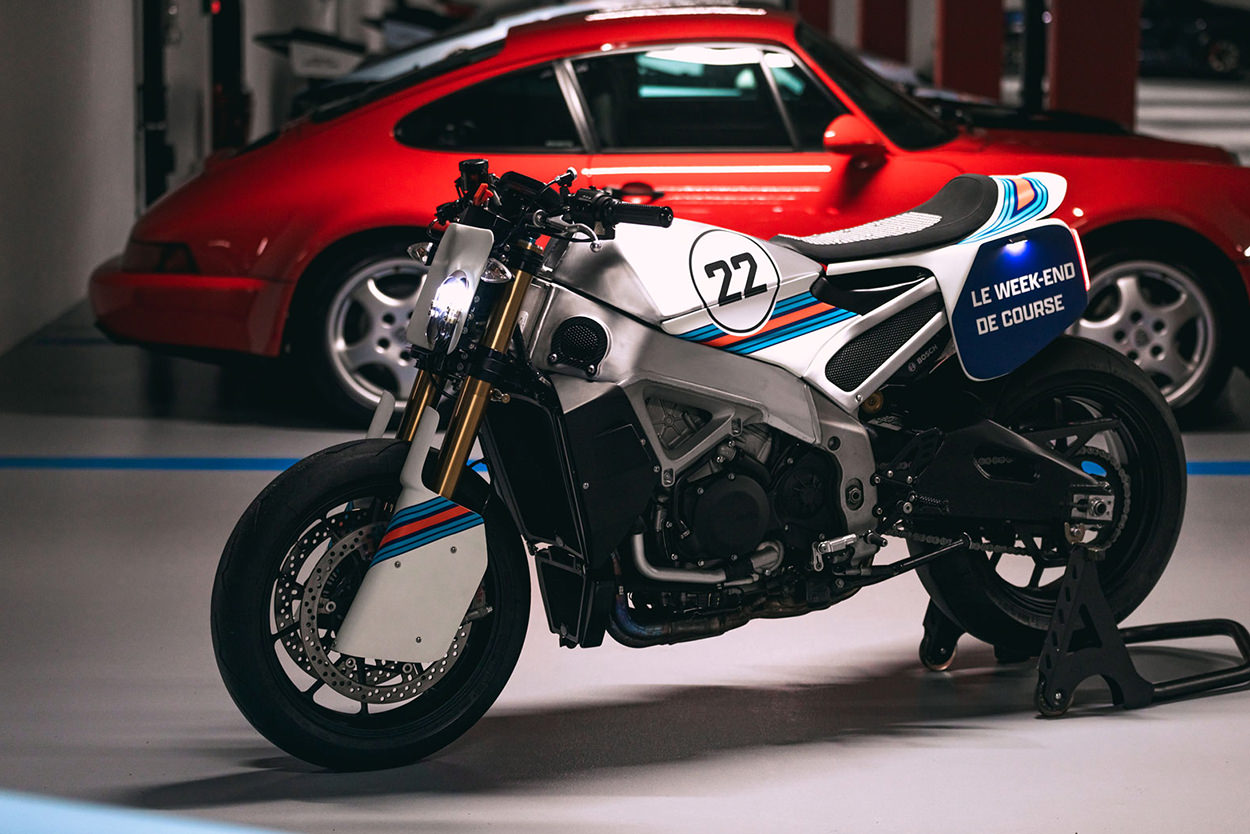 The spec-sheet on this Pikes Peak-style racer is pretty juicy. It’s running a pair of lightweight forged Aprilia wheels, an Akrapovič exhaust and a stunning alloy race tank from Burgol Racing Technologie. The rear cowl is an Airtech Streamlining part, but it’s been heavily modified to fit the bike.

The Tuono also wears a set of tank side panels, and a chunky pair of fork guards. Up front are a set of Highsider LEDs sunk into a race plate from SwissMotorcycle. 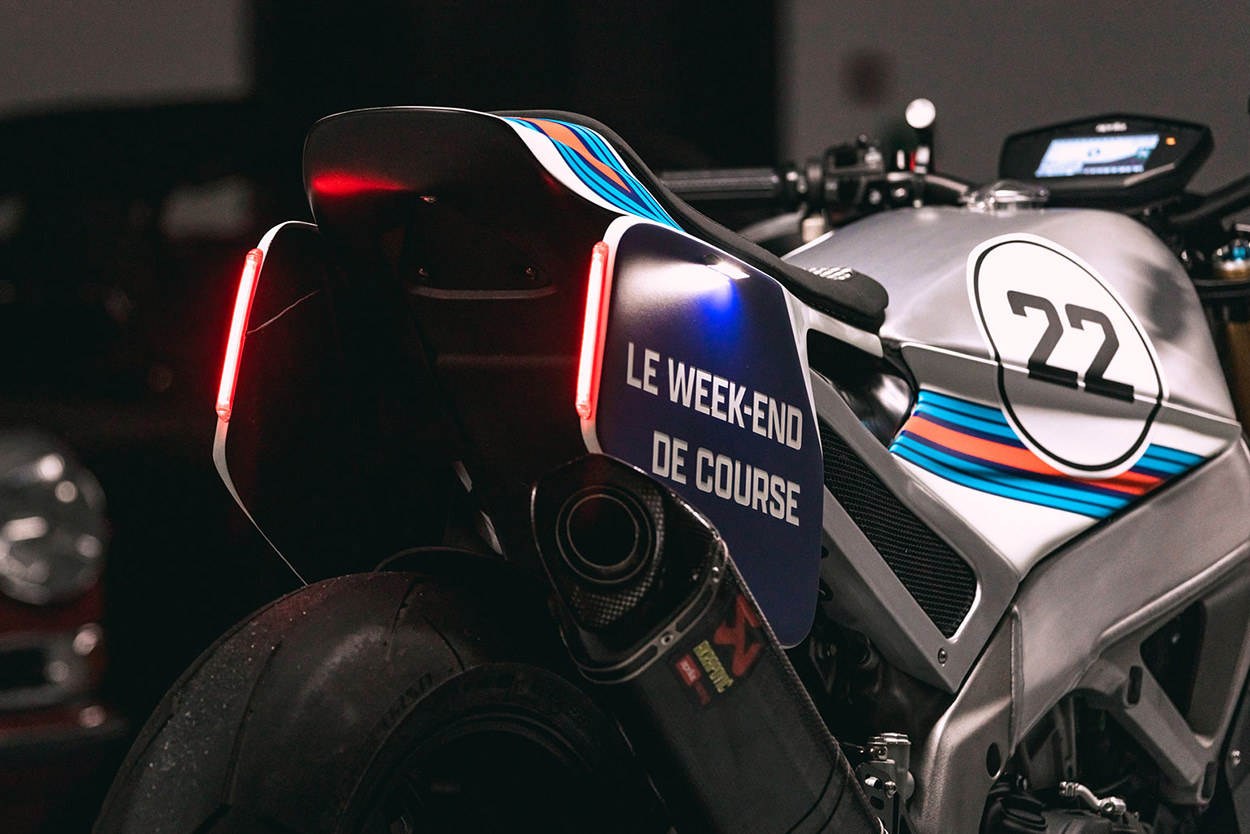 Two Highsider LED strips are mounted vertically to the back of the rear number boards as taillights; a feature taken from Le Mans race cars.

The Martini livery is another Le Mans touch, inspired by the #22 Porsche 917K that won the 1971 race. Martini colors are usually a cheap trick, but here, the effect works surprisingly well. Gwenael committed fully to the style, too, with a dash of Porsche’s pepita houndstooth fabric on the seat to drive the point home. [More | Images by pepito.jpg] 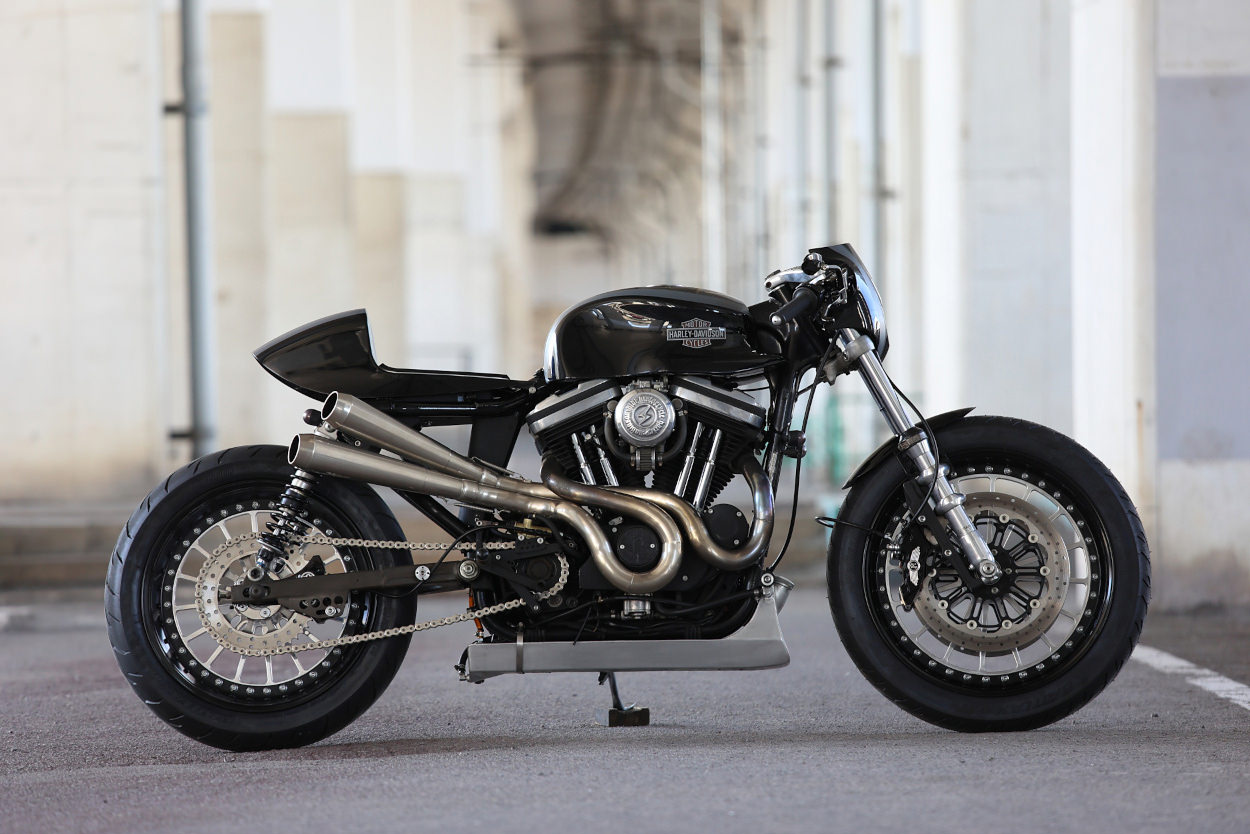 Harley-Davidson Sportster by Hide Motorcycle Neat H-D Sportster cafe racers are a rare treat. The Sporty’s chassis doesn’t lend itself to classic cafe racer lines, so it takes a little imagination to whip it into shape. But if there’s one shop we’d trust to get it right, it’s Japan’s Hide Motorcycle.

Founded by Hideya Togashi, ‘Hidemo’ are no strangers to Harley customs, and have bagged a number of Mooneyes show awards too. The other member of the Hidemo team, Naoya Watari, took the lead on this project, taking loose inspiration from Harley’s 1963 KRTT road racing bike. 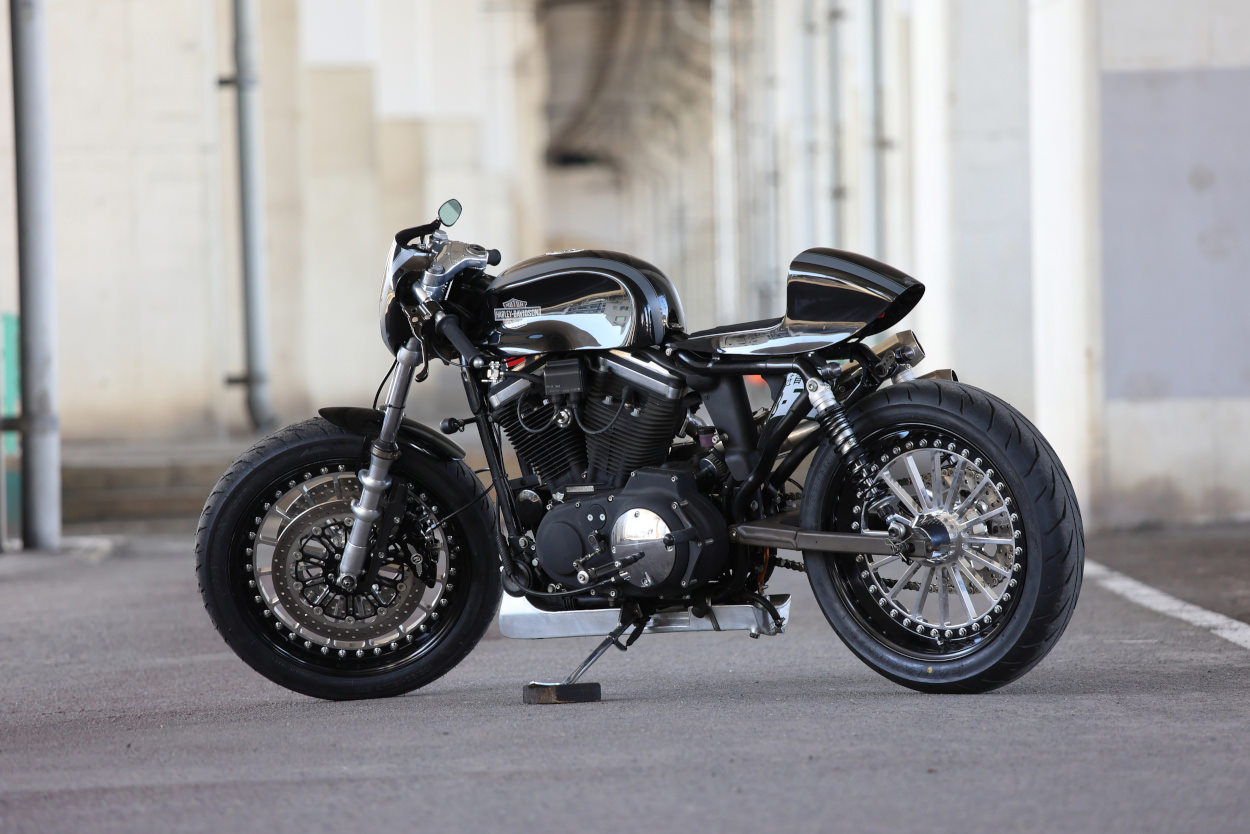 Watari-san started with a 2003-model Sportster XLH883R, bored out to 1200 cc. It’s now fed by a Mikuni HSR carb with a Hidemo air cleaner, and breathes out through a pair of snaking stainless steel exhausts.

The chassis has been upgraded with a set of stunning Ceriani GP forks, with new shocks attached to the modified Harley swingarm. Hidemo also added 19F/18R aluminum wheels, and a new set of brakes from Performance Machine. 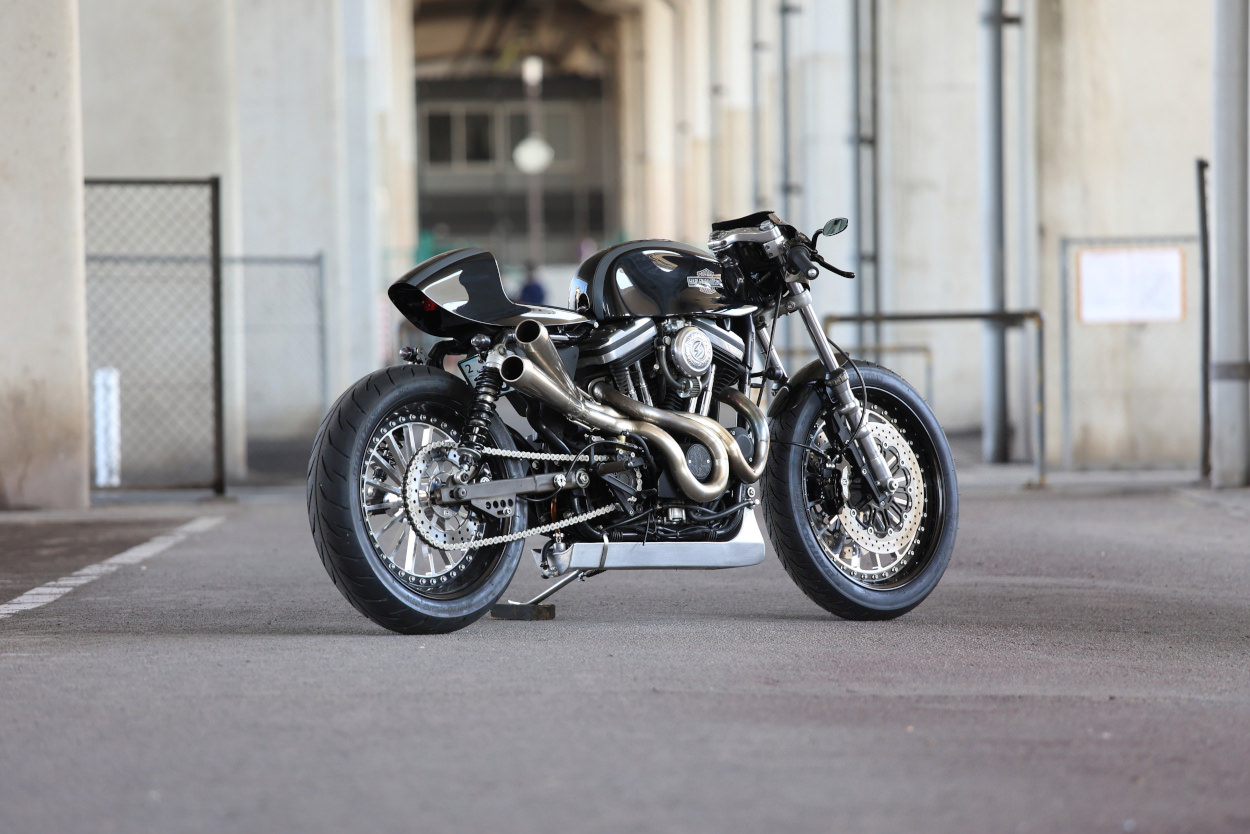 But it’s the bodywork that really stands out here. From the gorgeously sculpted tank, to the slightly bulbous (but not overdone) tail section, everything fits like it belongs there. A hand-made oil tank, masquerading as a belly pan, adds a neat finishing touch, along with a subtle black and grey paint job. [More] 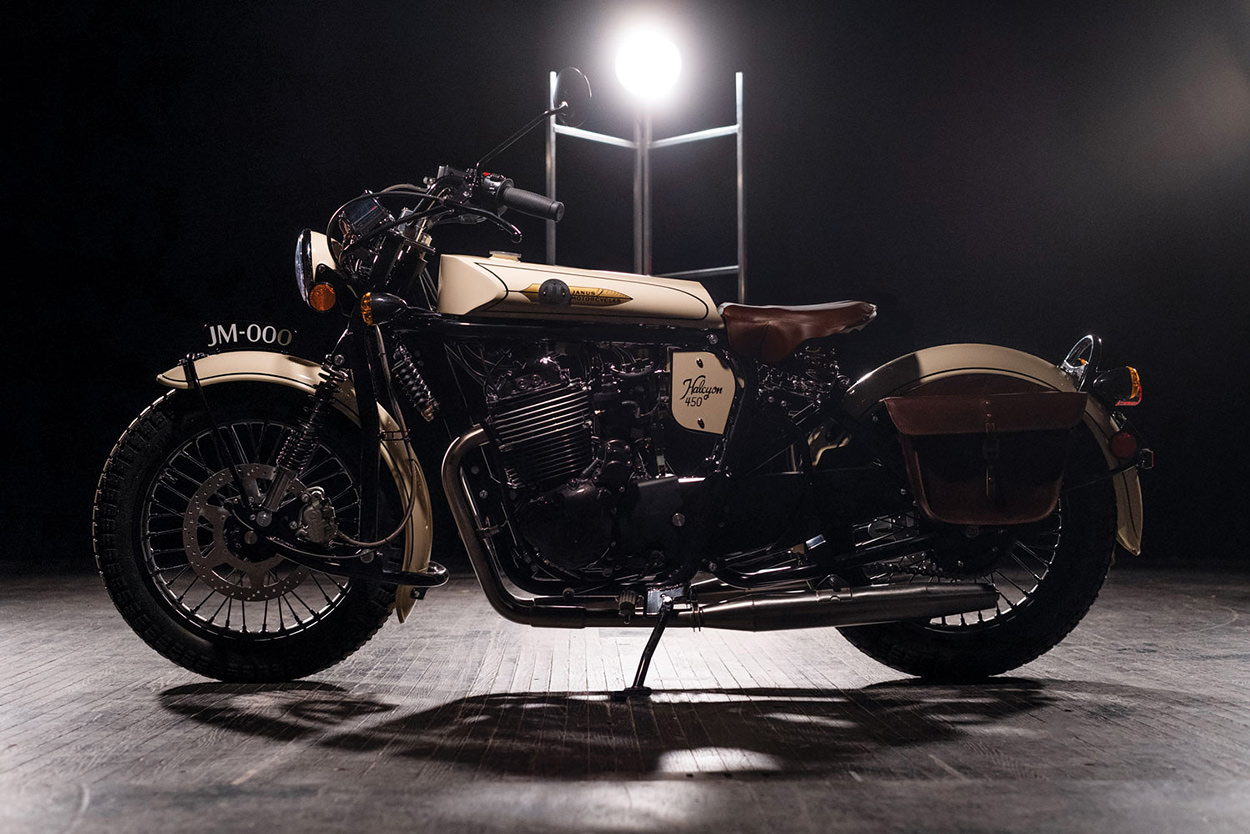 Janus Halcyon 450 Ever heard of Janus Motorcycles? It’s a small built-to-order company based in Goshen, Indiana, that specializes in vintage-looking small capacity bikes. And they’ve just released a 450 cc version of their existing 250 cc Halcyon model.

The 1920s-styled Halcyon 450 uses a Chinese-made SWM 445 cc single-cylinder motor, wedged into a proprietary frame with Janus’ own leading-link forks. The engine only makes 30 hp, for a maximum speed of 90 mph, but the Halcyon’s more about looking good than being fast. 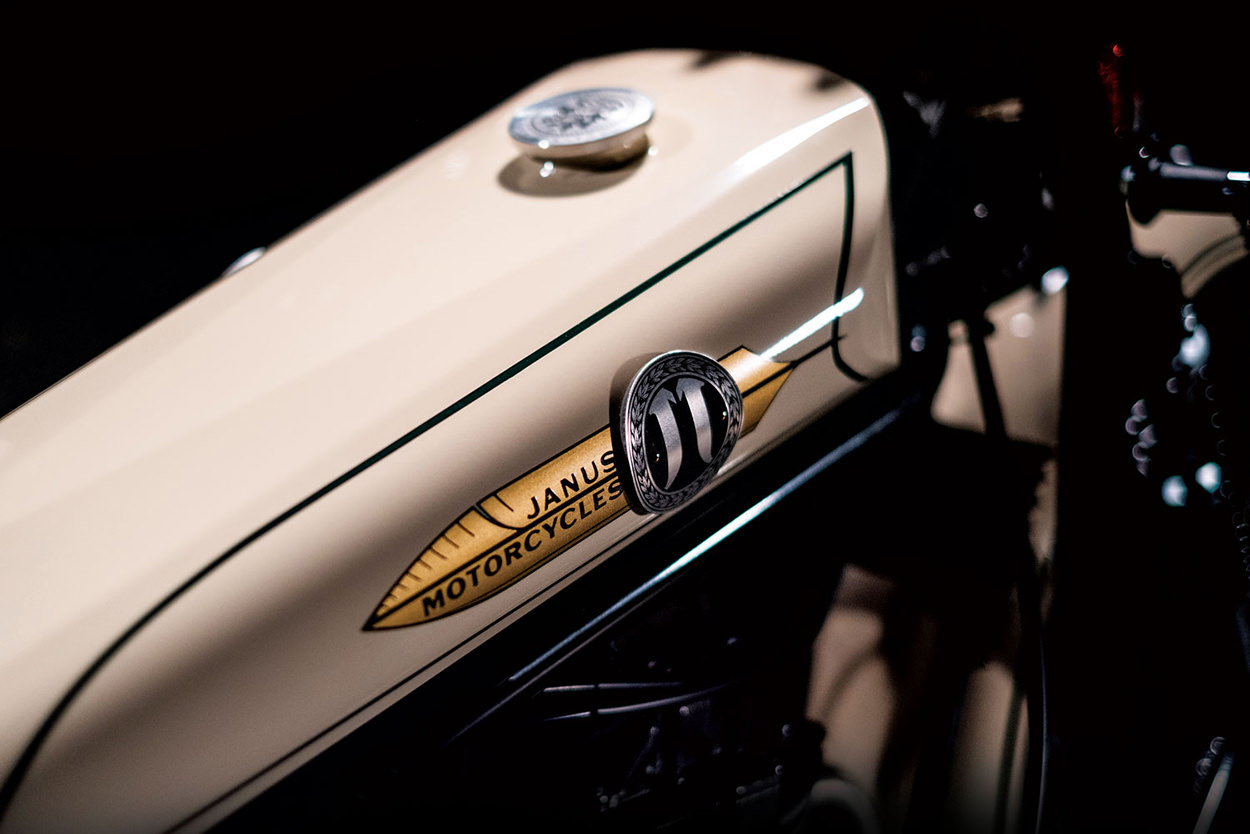 Off-the-shelf parts include Brembo brakes, Ikon rear shocks and a neatly-finished Sargent seat. But most of the Halcyon’s remaining parts, including the fuel tank and leather bits, are hand-made. Janus uses a network of craftsmen in their greater area to build their parts, many of whom are Amish.

The Halcyon starts at $13,500, depending on how you configure it—which puts it in the same bracket as the Triumph Bonneville T120. But each Janus is made to order, and there are multiple personalization options, including paint, trim, and even exhaust and luggage choices.

It means your money can buy you a totally unique ride. [Janus Halcyon 450] 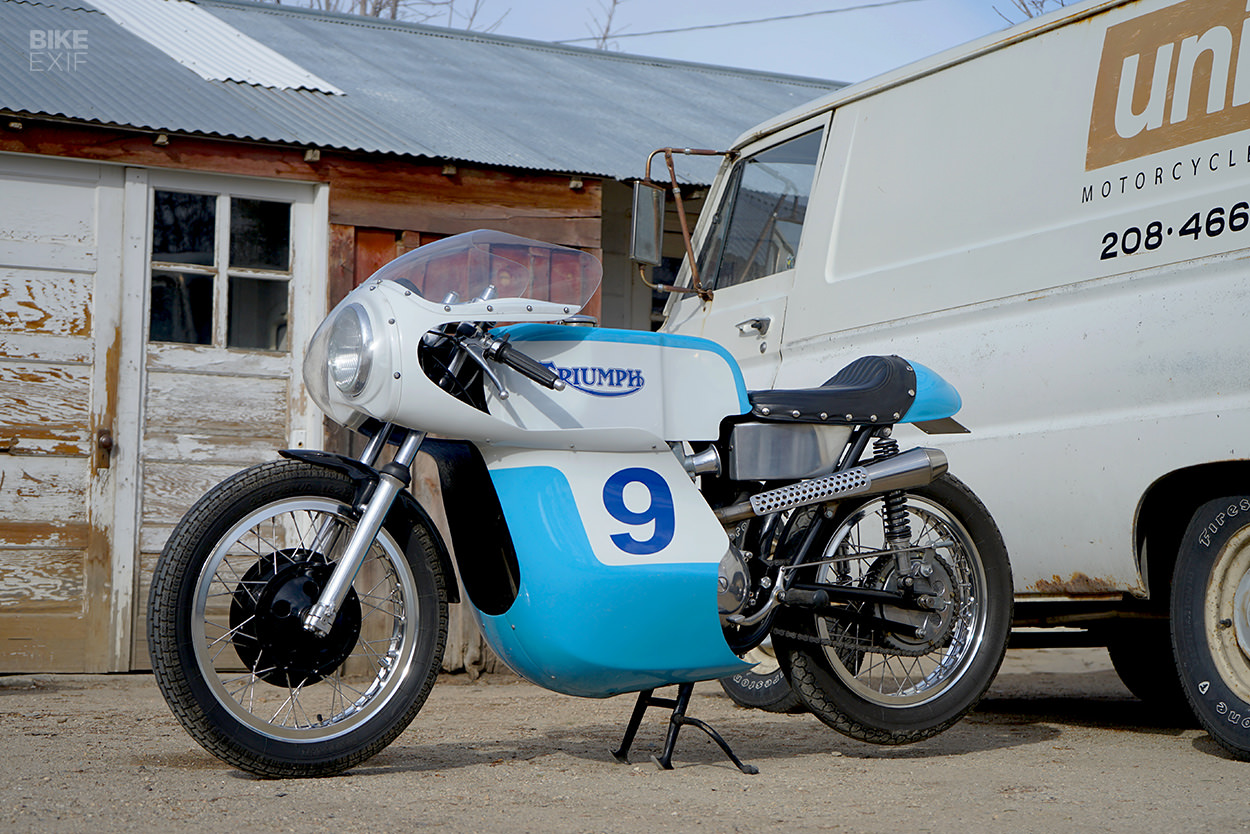 Win a Triumph T120 Gary Nixon tribute The last time we featured Union Motorcycle Classics, they built a Triumph to raffle off for charity. And now they’re at it again. This time, they’re raffling off a bike they’ve just bought back from a client, after originally building it five years ago.

It’s quite a story: this Triumph originally started out as a 1972 T120 RV and a bunch of parts in boxes. Its owner asked for a red chopper, but instead, Union partners Mike Watanabe and Luke Ransom delivered a cracking tribute to Gary Nixon’s Daytona-winning Triumph race bike. (“He was a little surprised when he picked it up,” Mike admits.) 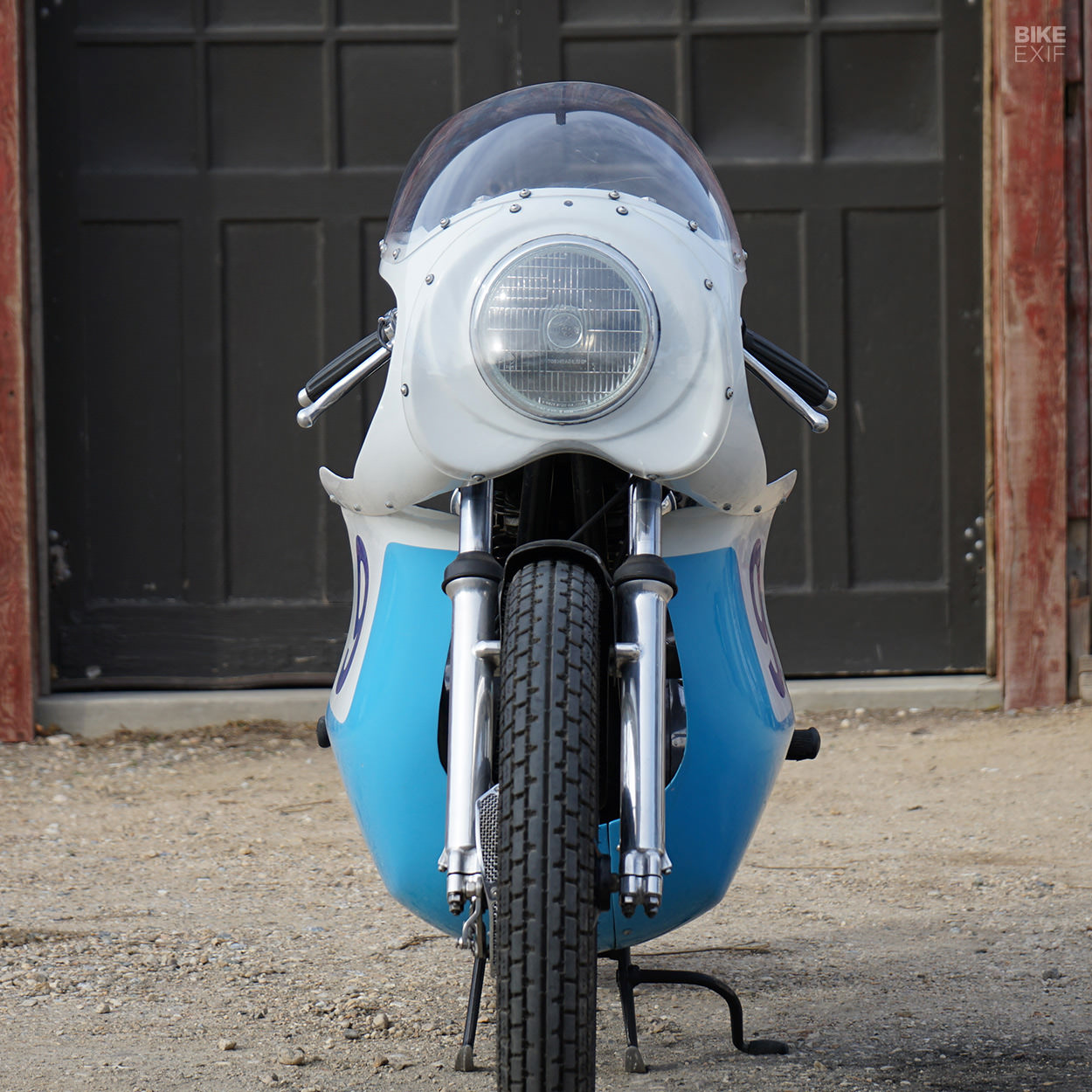 Union recently purchased the bike back at a reasonable price, because the owner loved the idea that it would be used to raise funds for a charitable cause. And because he wanted to start an organic mushroom farm, and needed capital.

The build itself is pretty spectacular. It features an oil-in-frame chassis with a host of custom parts, and a clever mix of period-correct bodywork. The tank was molded straight from an original Triumph Daytona tank, with a custom tunnel to fit the frame. The fairing and tail are Glass From The Past units that were massaged into place. 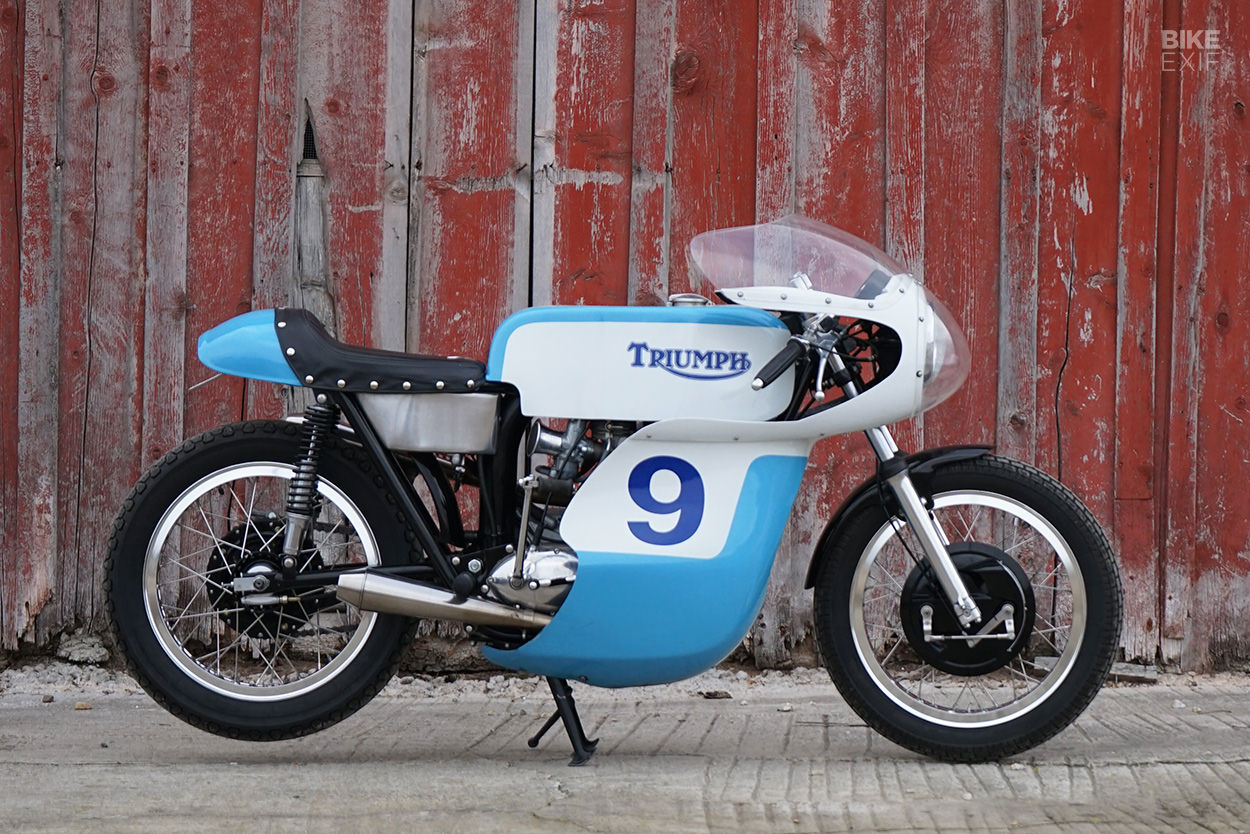 Other bits include custom yokes, Excel rims, a 1969 Triumph twin leading front brake, and custom exhausts built from Cone Engineering parts. Remarkably, the bike’s only done 3,500 miles since the engine was rebuilt—but it’ll get an extensive service before it goes off to its new owner.

Think that could be you? You can enter here, with all proceeds going to re:Act—an organization that helps at-risk youth in Southeast Asia. 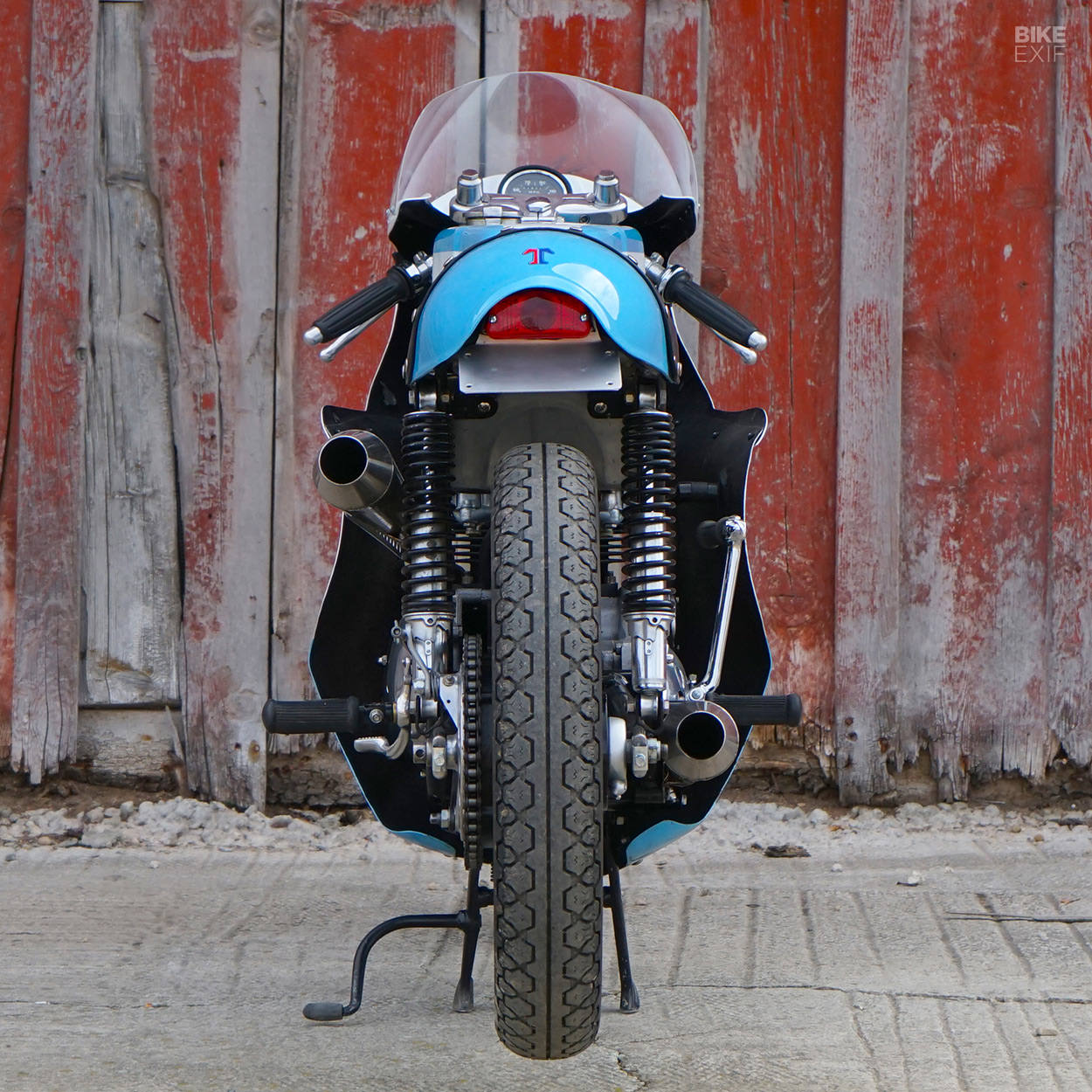