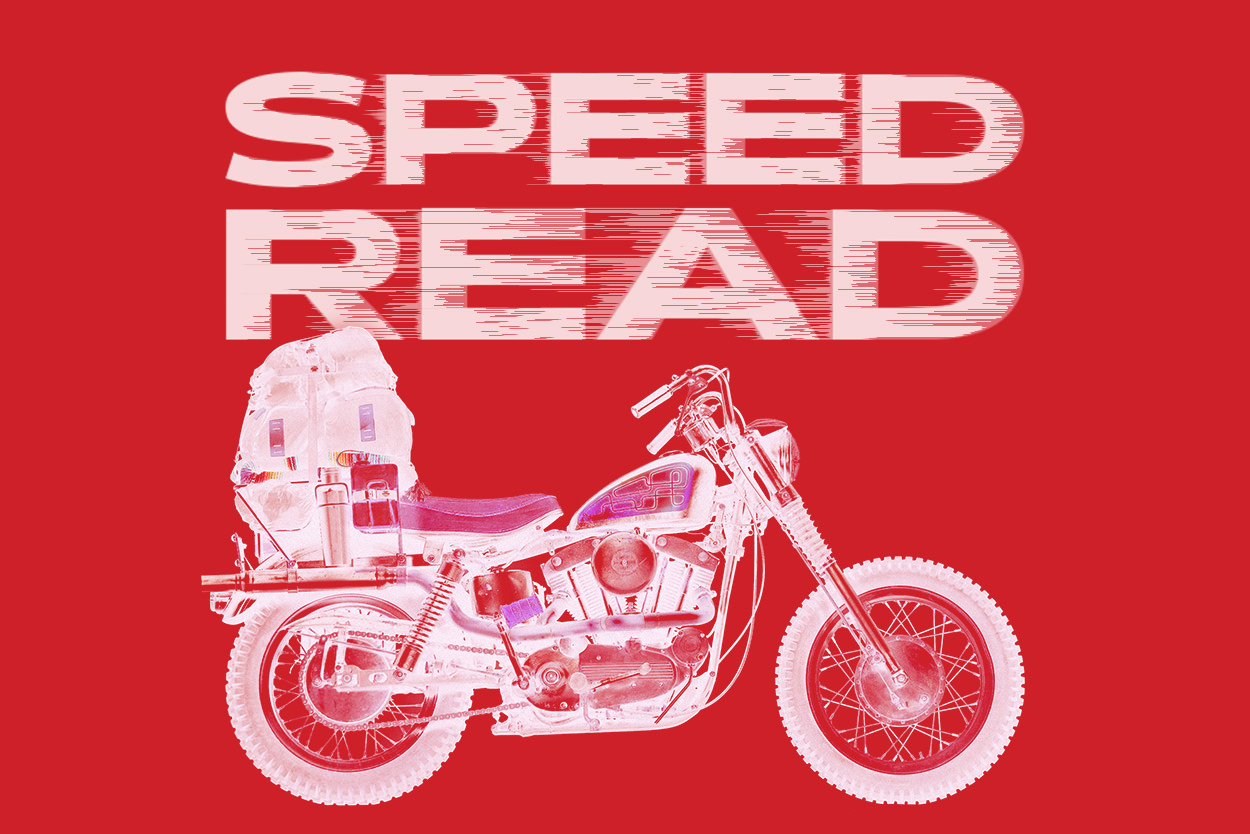 It’s an outdoorsy week, with a 1970s Harley Sportster equipped for the Vintage 1000 rally, another Husqvarna Norden 901 teaser, and an electric snow bike. But first we look at a tastefully modded Aprilia RSV Mille, and a Yamaha SR500 street scrambler. 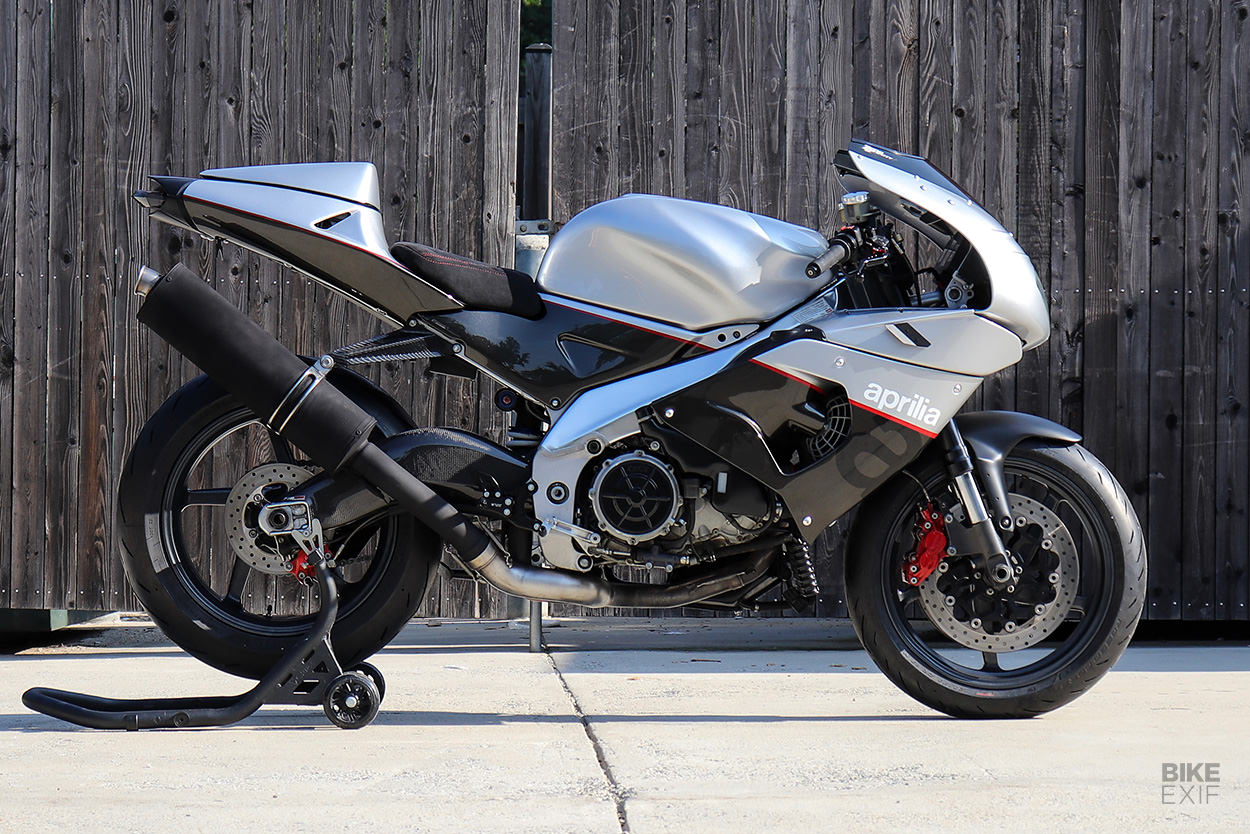 Aprilia RSV Mille by Jett Design Based in Virginia, USA, Andrew Jett has a thing for ‘future classic’ sport bikes. His latest work is this 2000-model Aprilia RSV Mille, lightly resto-modded for a client. And while the man on the street wouldn’t know the difference between this and the stock version, aficionados will spot a plethora of clever mods.

Most of the nipping and tucking centers around the Aprilia’s bodywork. Andrew ditched the lower fairings for a half-fairing design, that sharpens the look but also exposes more of the bike’s motor. 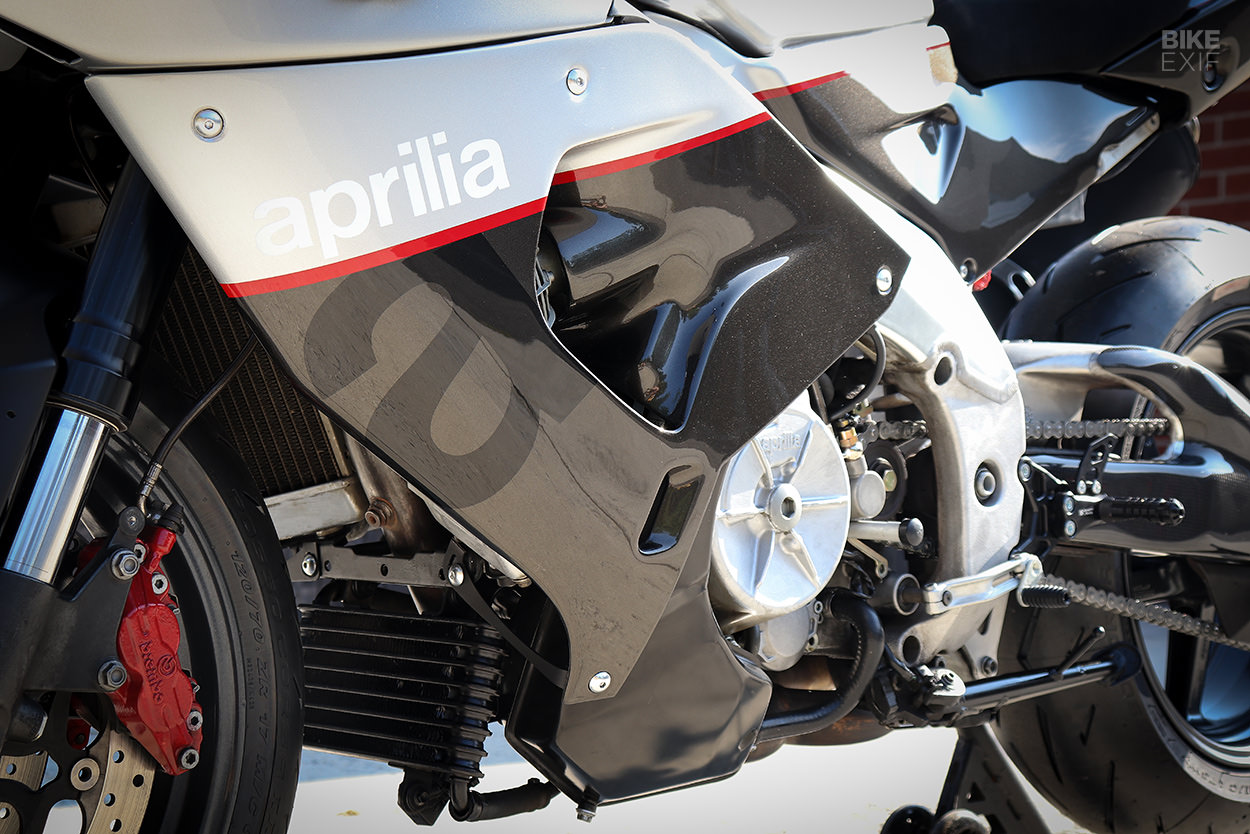 Areas like the mirror and accessory mounts on the upper parts of the fairing have been smoothed off, and it now sports a trimmed Zero Gravity windscreen.

Andrew fabricated new fairing brackets too, and installed integrated LED turn signals up front. The rear’s been tweaked with an LED taillight and turn signal combo unit, along with a custom-made license plate bracket. The seat’s sporting a neat hand-stitched Alcantara cover. 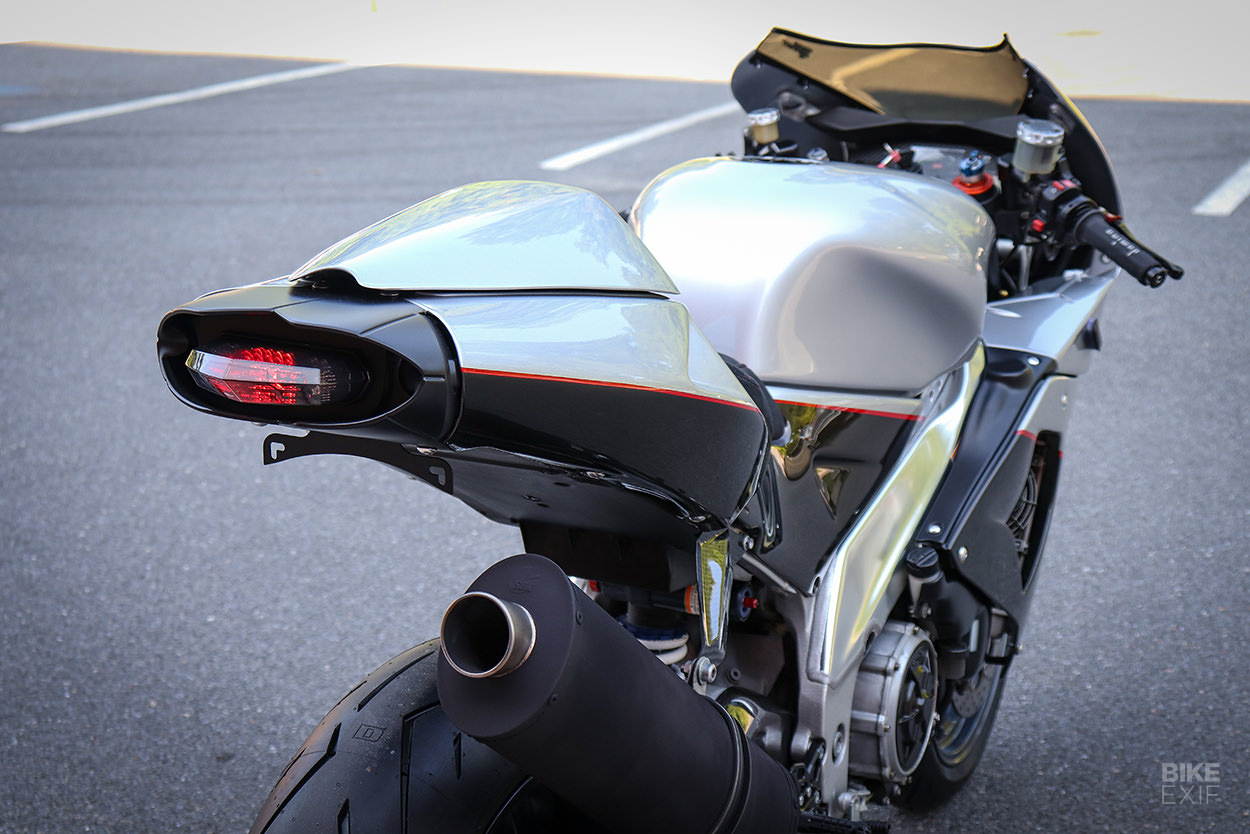 On the performance side, Andrew modified the OEM air box and added a K&N filter, plus a titanium Leo Vince SBK muffler. The controls have been upgraded with adjustable Apex clip-ons, Domino grips, CRG mirrors and levers, and a new set of factory Aprilia switches. There are also new billet aluminum rear-sets from Bonamici Racing lower down. 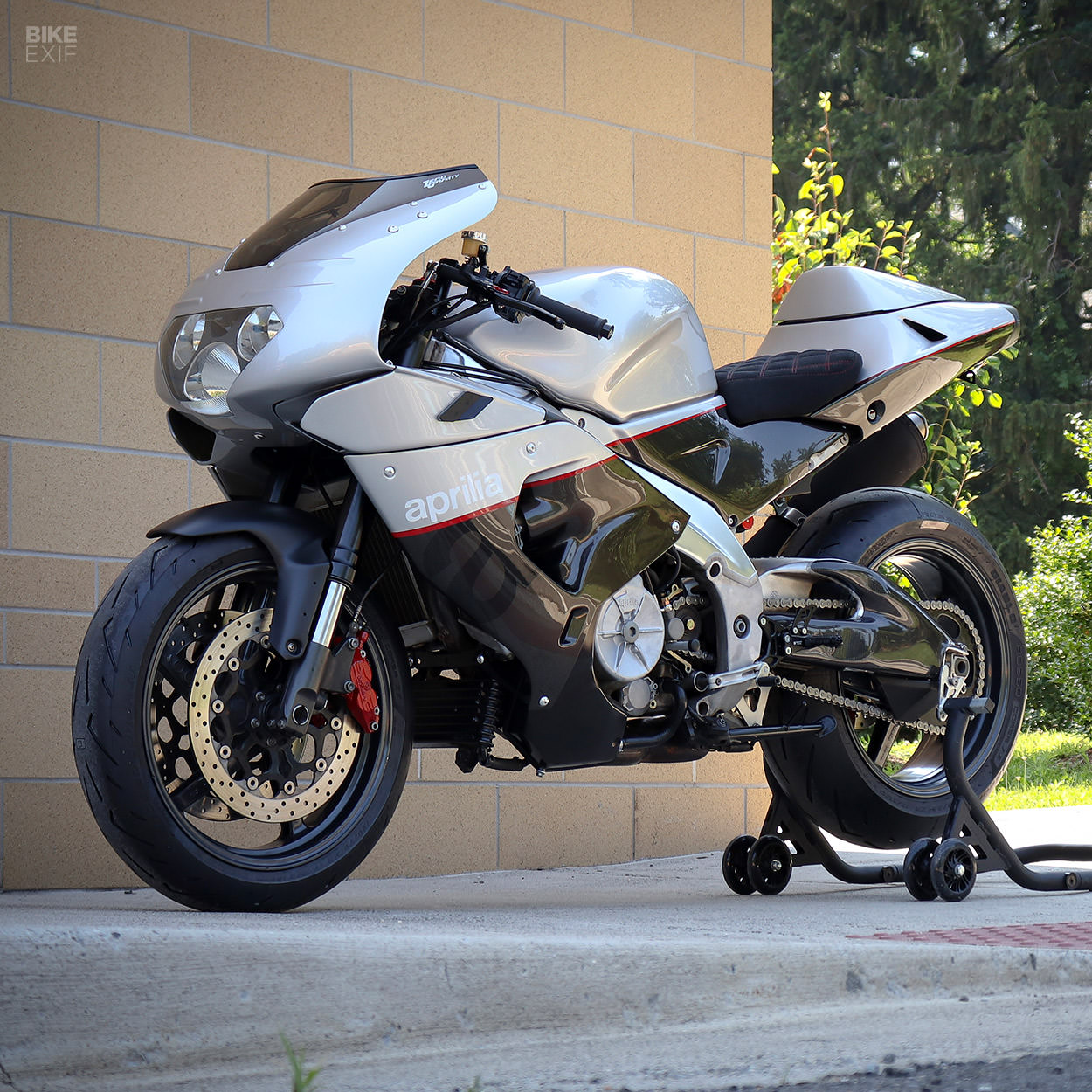 Andrew installed a Lithium-ion battery too, and a full complement of titanium fasteners from Pro-Bolt. Other finishing touches include an SSR fuel cap, a HyperPro steering damper and some carbon fiber trim from Pro-Fiber.

Kevin Petitt at Petittbilt laid down the simple, yet classy, black and silver livery. This RSV Mille now weights around 45 lbs less than before, looks sharper and has just a little more poke. [Jett Design] 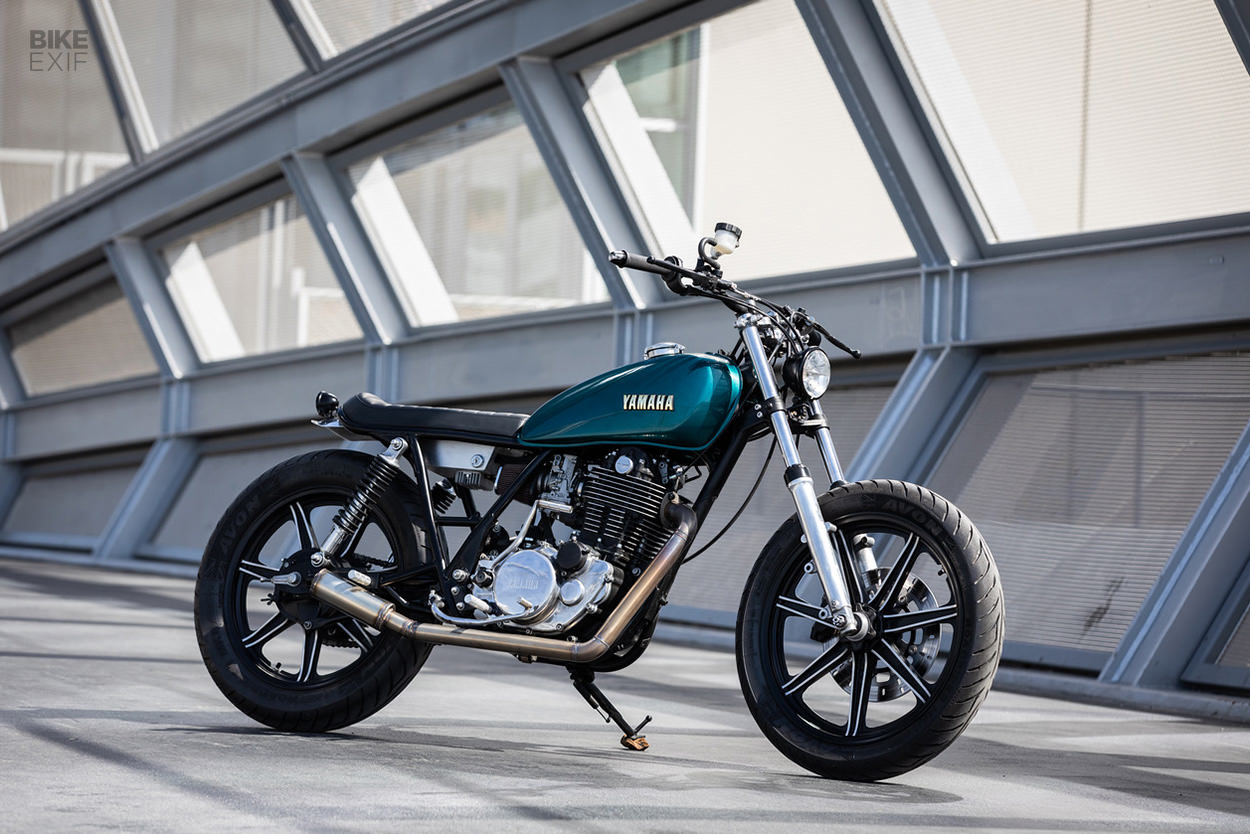 Yamaha SR500 by Nomad Motorcycles The guy behind Nomad Motorcycles in Paris, Bryan, has motorcycling in his genes. His grandfather raced the Paris Dakar rally on a Yamaha XT500 in the 80s, and his father raced motocross. After working three years as a mechanic, Bryan finally opened Nomad Cycles last year.

This Yamaha SR500 is his fourth build, and although it treads familiar ground, it’s hella neat. Bryan built it for a customer on a tight budget, aiming for a minimalistic custom with performance in mind. 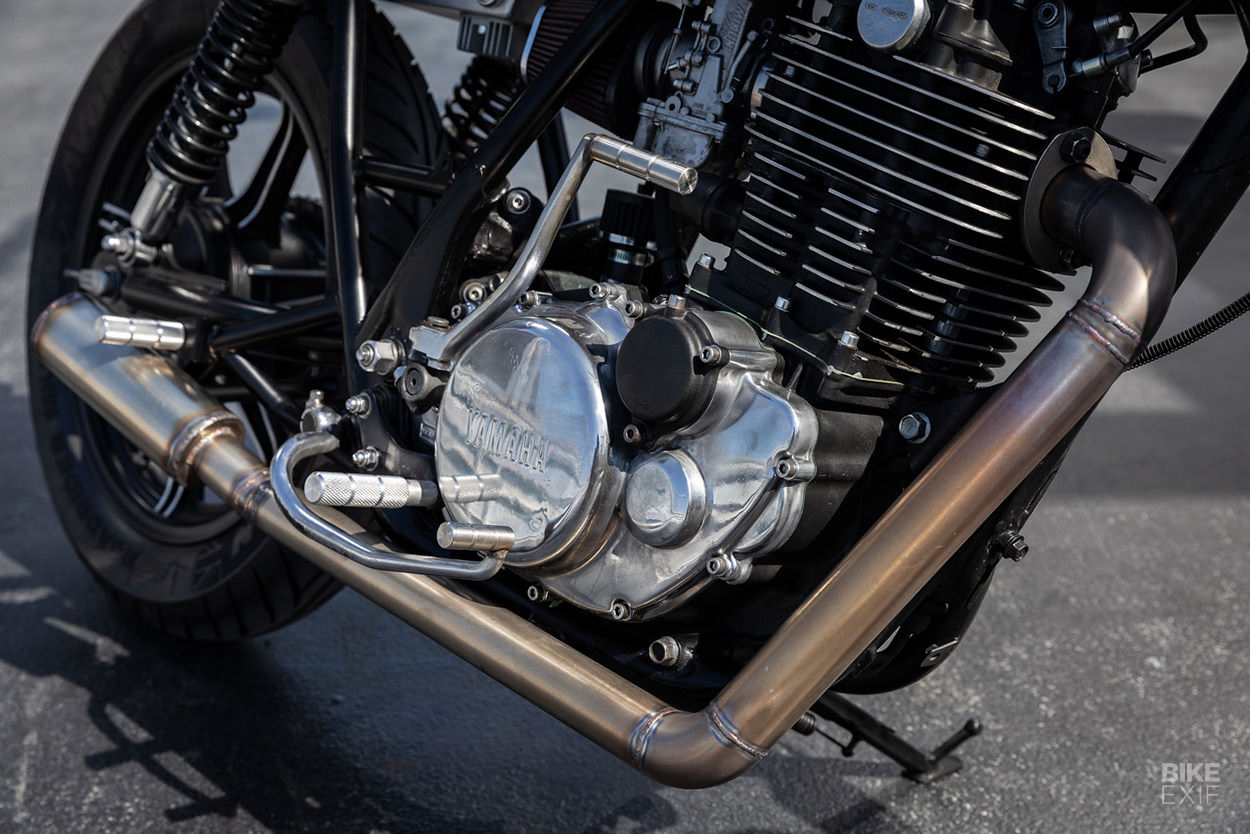 Bryan tore into the SR’s motor first, rebuilding it with a balanced crankshaft, a stage one Yoshimura camshaft and a high compression piston. Other upgrades include a high flow oil pump, a Mikuni TMR36 carb and a stainless steel exhaust system.

To beef up the bike’s braking ability, Bryan installed a floating front disc, a Yamaha XJR caliper and a Nissin master cylinder. Maxime at Hurco machined a special bracket to make it all fit. 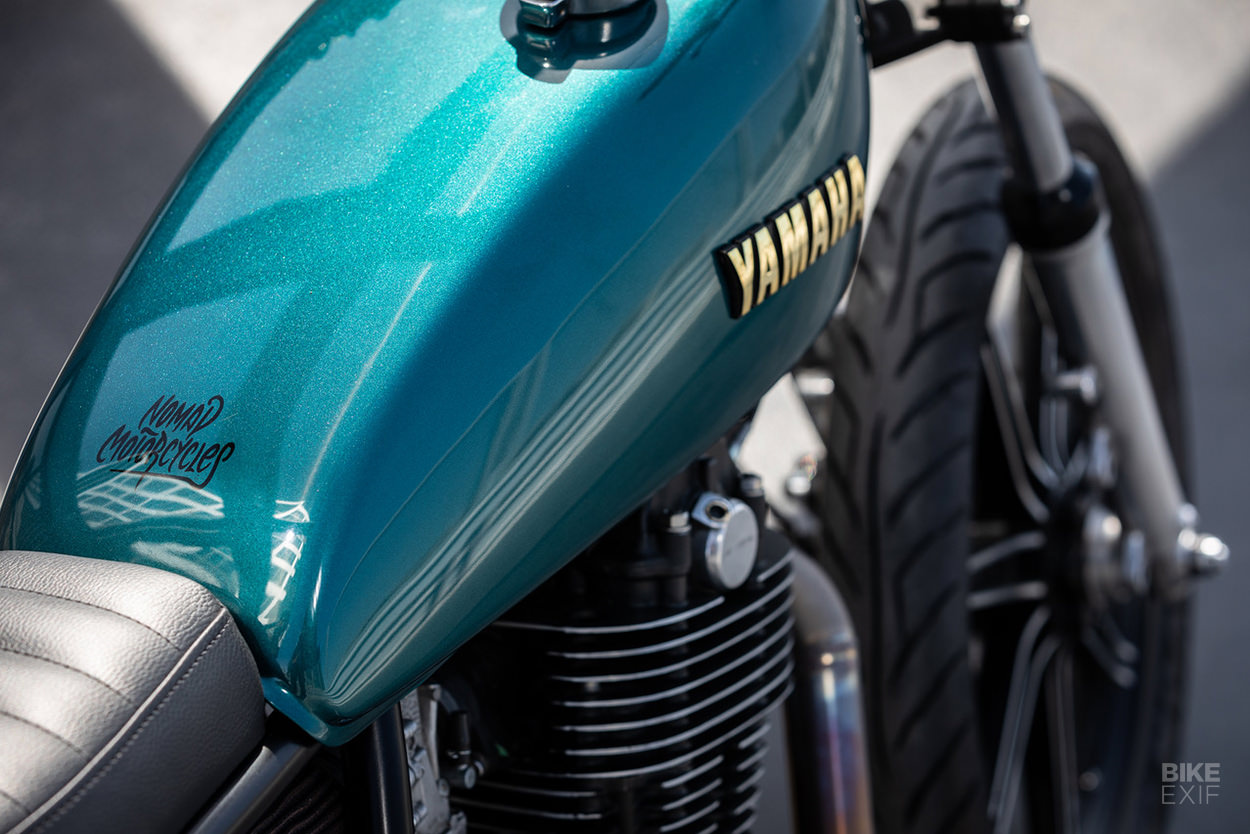 Up top, Bryan added a Monza gas cap to the tank, then cut-and-looped the subframe. It’s topped off with a slim seat with upholstery from SFM Sellerie, and a hand-shaped rear fender. Clément Baupin at CBPMC Peinture laid down the stellar Peugeot Reflex Blue paint, complete with a deep glitter effect.

New bars, grips and bar-end turn signals, and a tidy under-seat electronics tray, round out the build. It’s an unassuming custom that packs a surprise punch, and a good reason to keep an eye on Nomad Motorcycles. [Nomad Motorcycles | Images by Yann Deret] 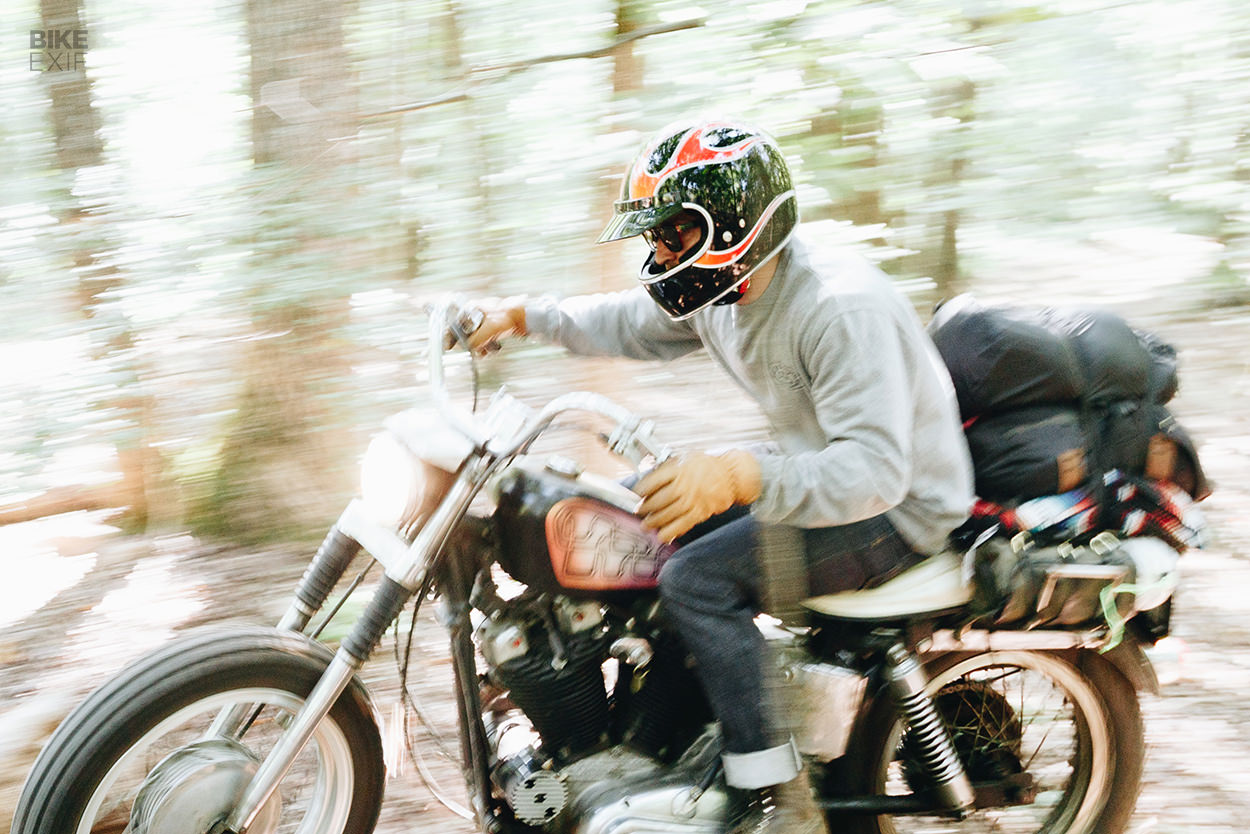 Appalachian Dirt Hog, from Iron & Air issue 44 Now in its seventh year, the Vintage 1000 is mostly off-road race that covers 1,000 miles in five days. But there’s a catch: it’s for pre-1981 bikes, and GPS units are not allowed.

Jake Hindes over at Prism Supply Co. was up to the challenge, so he sourced a beat-up, but functional, 1970 H-D Sportster from a friend. His reasoning; “It fits the criteria, a Harley has never finished the Vintage ride before, and it’s incredibly cool!” 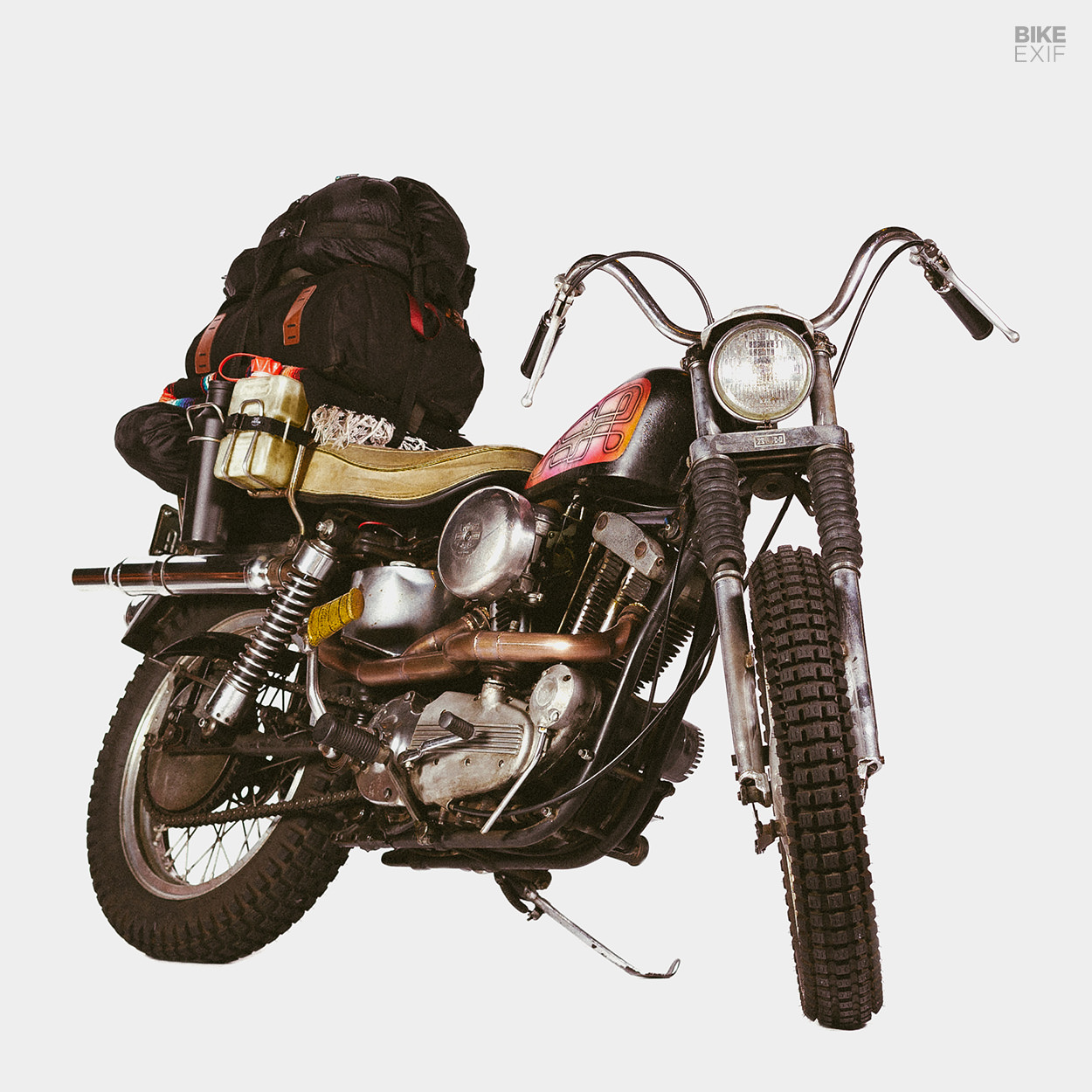 Most modern adventure bikes would be kitted to the nines for this sort of trip, but Jake’s Sporty is refreshingly basic, in keeping with the spirit of the ride.

The only real fabrication is the custom stainless steel luggage rack, packed to the brim with everything needed for the trip. With the addition of knobby tires and a quick fluid change, Jake was ready to hit the road. 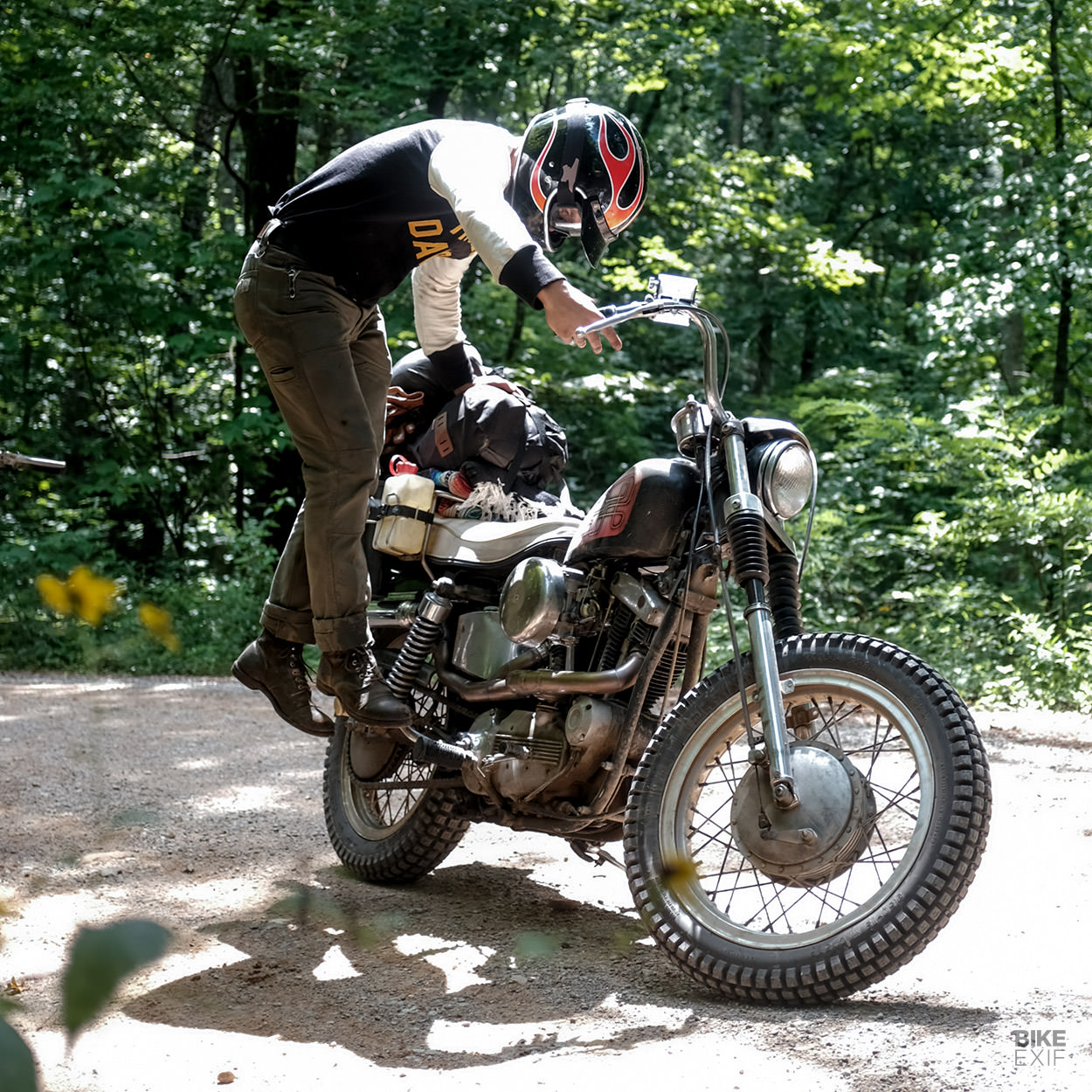 This year’s route started in Chattanooga, and followed a loop through Georgia and North Carolina, and back to Chattanooga again. 20 riders covered 200 miles a day from sunrise to sunset, working in groups of five and relying on camaraderie and grit to complete each day’s riding. The terrain included dirt roads, logging trails, steep climbs and deep water crossings. 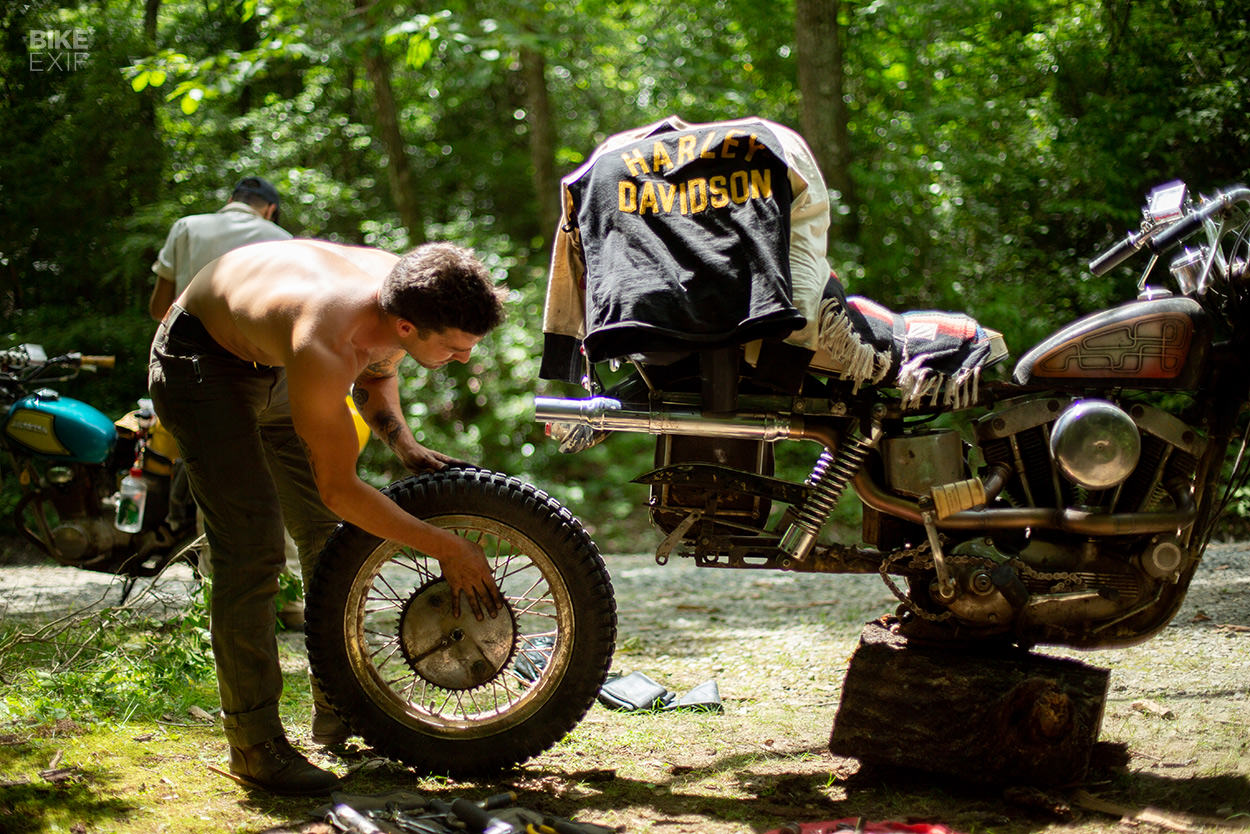 Jake’s Sportster did OK for a few days, but then it started showing its age, sheering its rear sprocket bolts on the third day. After numerous trailside fixes, it eventually finished the race—a testament to how tough old Sportsters can be.

You can read and see more from the adventure on the Iron & Air Journal, and in Issue 044 of Iron & Air Magazine, which is on sale here for US and Canadian readers. [Prism Supply Co. | Images by Matt Best]

Husqvarna Norden 901 versus Iceland Husqvarna have just released another video teasing their Norden 901, and it’s given us the clearest look yet at the Austrian/Swedish brand’s new adventure bike. The video shows Dakar rally legend Cyril Despres, and South African-Swiss adventurer Mike Horn, riding prototypes of the Norden against the breathtaking backdrop of Iceland.

The big takeaway is that the bikes shown in the video look extremely close to the jaw-dropping concept that Husqvarna originally unveiled. Sadly, the graphics aren’t quite as striking—but the overall look and feel hasn’t changed much. Husqvarna say these are ‘prototypes,’ but we’re willing to bet that this is close to the finished product. 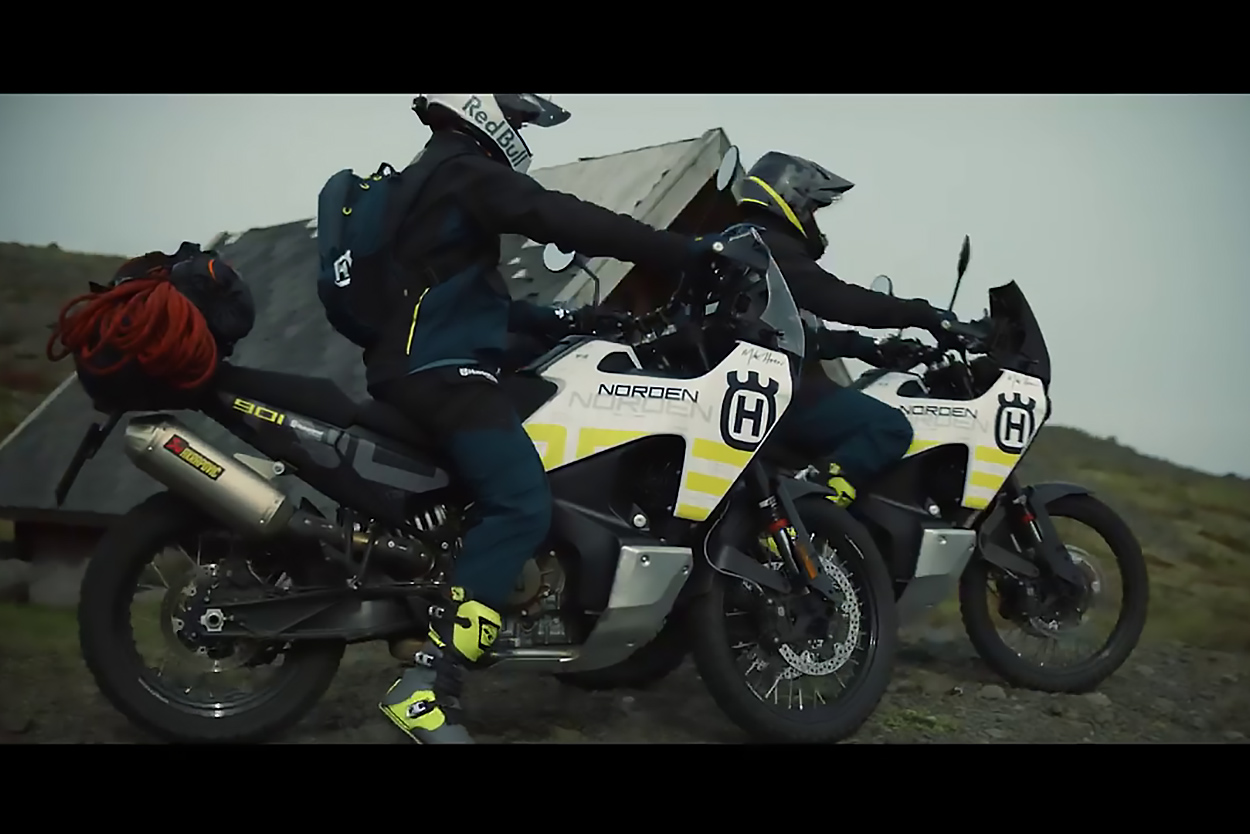 Revzilla have also spotted different trim on the two bikes shown—including different wheel sizes and exhaust. This could be Husqvarna playing with different setups, or it could point to the Norden 901 being available in two different versions.

Either way, color us excited. It’s no secret that the Norden 901 will use the KTM 890 Adventure as its starting point—so we’re expecting an adventure bike that’ll combine high levels of performance with a unique retro-futuristic look. What’s not to love? 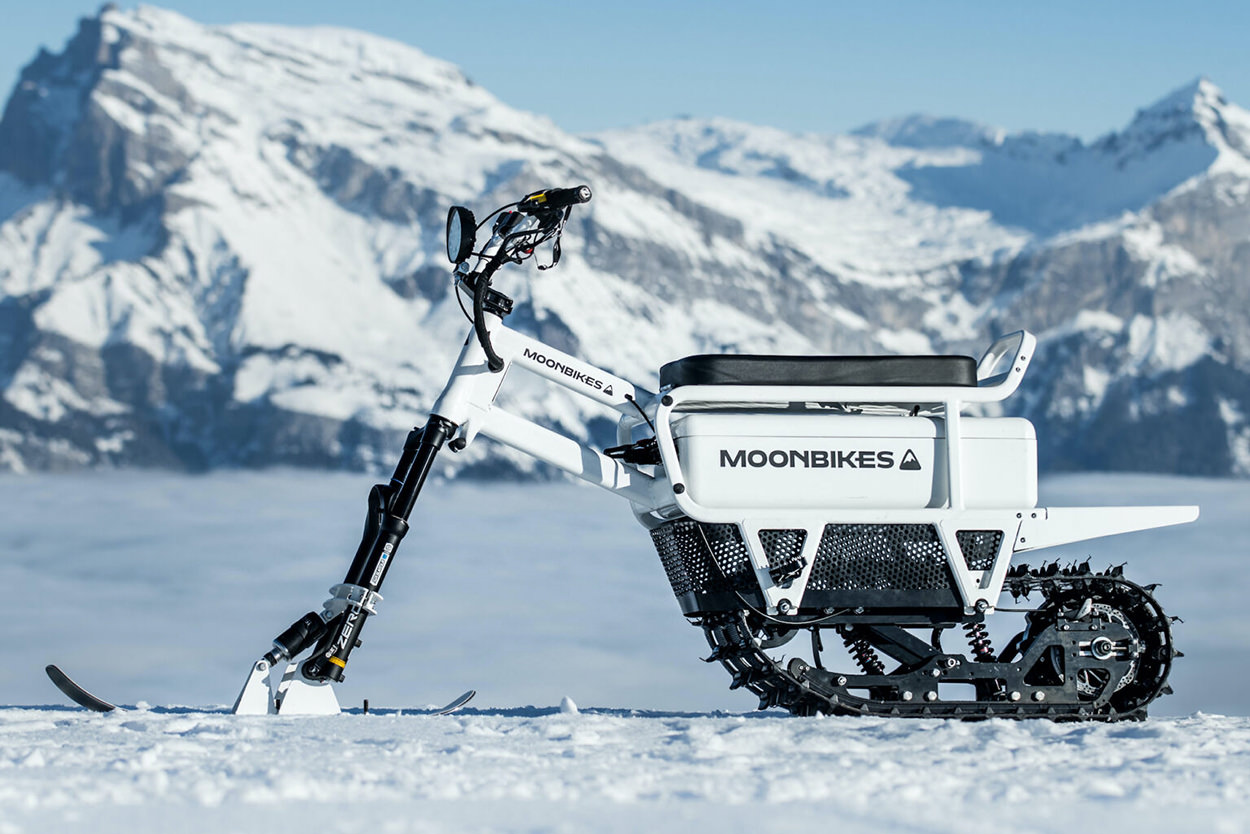 The MoonBikes electric snow bike Snow bikes aren’t a new concept, but we’ve never seen an electric one before. MoonBikes is a new brand launched by Nicolas Muron—a former aeronautical engineer that obviously has a wild imagination and a penchant for fun.

The MoonBike is built around a welded steel frame, with a track at the back and a ski up front. The ski’s attached to what looks like a set of mountain bike telescopic forks, and we’re spotting an additional damper, presumably to allow the ski some rotational play. There’s a pair of coil-over shocks out back. 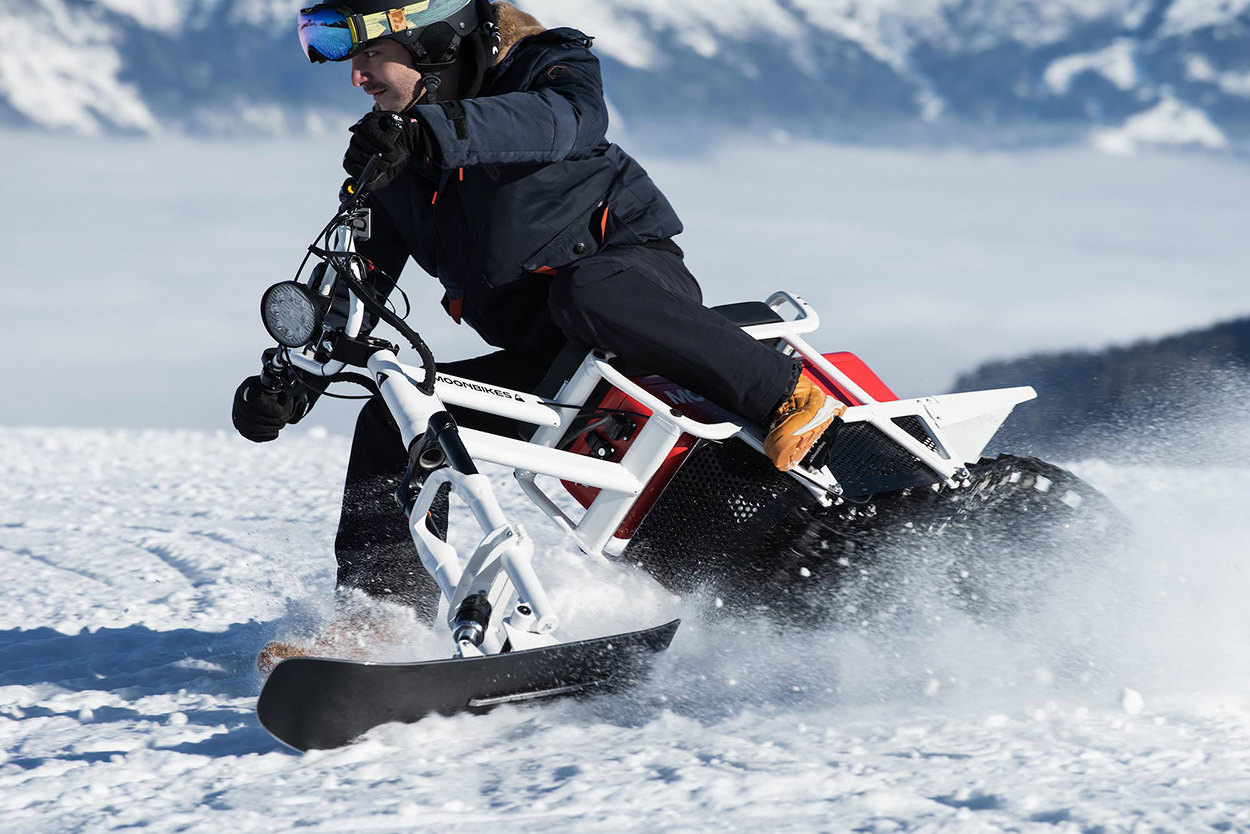 The 3kW electric motor sits in the rear-most hub, and makes 170 Nm of torque on paper. We’re not sure how that translates in the real world, but MoonBikes are listing a top speed of 26 mph. It can traverse snow up to 12” deep, tackle 30-degree gradients and operate in temperatures as low as -13 fahrenheit.

Each MoonBike can be specc’d with either a 2.5 kWh or 3.2 kWh lithium-ion battery. The battery’s removable, and there’s an optional power pack upgrade that adds a second 1.2 kWh battery. Range can be anything from 1.5 to 3 hours of operation, depending on the setup. 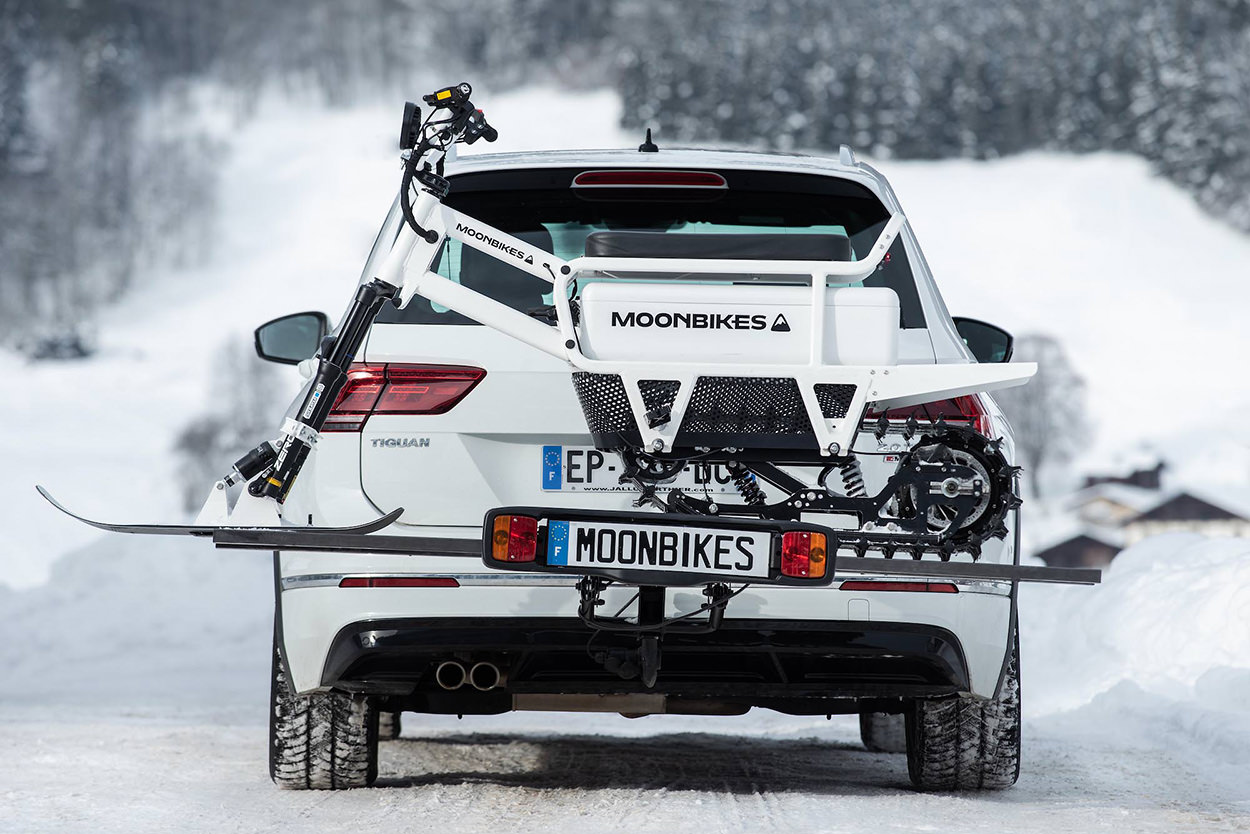 Pricing currently starts at $7,980, with an additional $1,800 for the second battery, and $360 for a fast charger. MoonBikes are currently taking orders for the first 250 bikes with a refundable deposit of $250, and they’re expected to land around winter 2021/2022 (northern hemisphere).

The first batch will be called the ‘Pioneer Edition,’ with design elements that won’t be available on later models. If it actually snowed where I live I’d be super curious—this snow whip looks fun, quiet, and compact enough to cart around easily. [MoonBikes | Via]