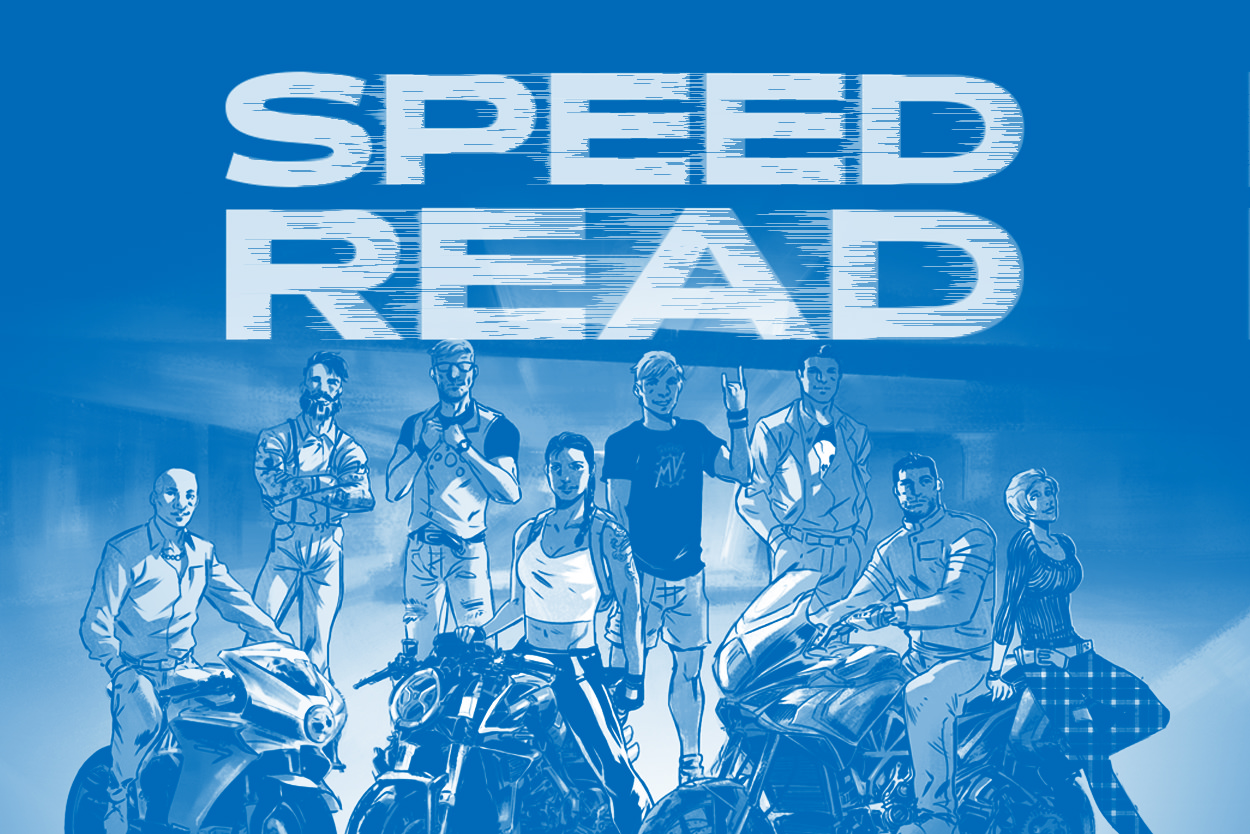 A classy Triumph Thruxton from Poland, a beautifully restored Husqvarna desert racer from California, and a very rapid Triumph Sprint 900 cafe racer from Norway. Plus, of all things, a comic from MV Agusta… 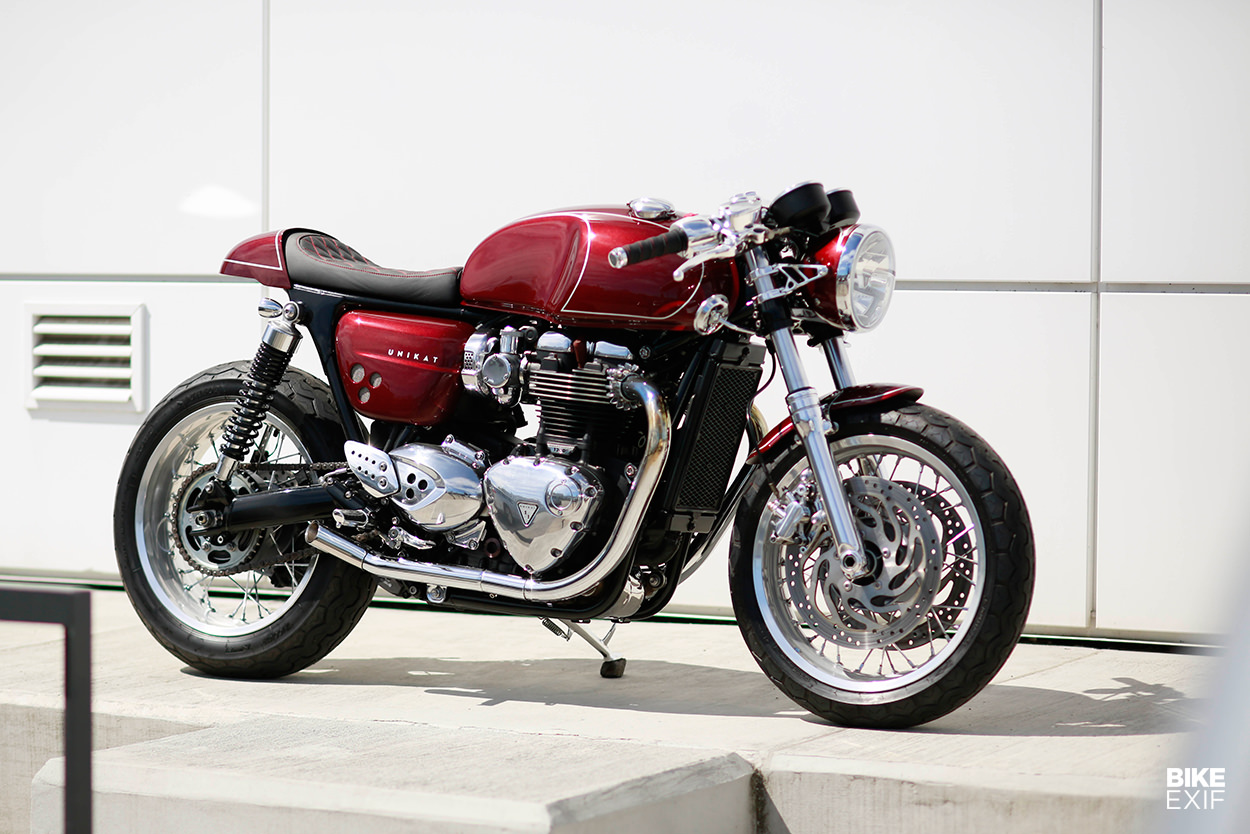 Triumph Thruxton by Unikat Triumph has a knack of building bikes that look good right out of the box: despite the healthy sales figures, we don’t see many customized ‘modern classics.’ And the Thruxton seems to be the model that owners are happiest with.

This modest but thoughtful custom from Unikat retains the Thruxton’s visual appeal but takes everything up a notch. Shop boss Grzegorz Korczak tells us that the client brief was simple: “Make this modern bike look as vintage as possible.” 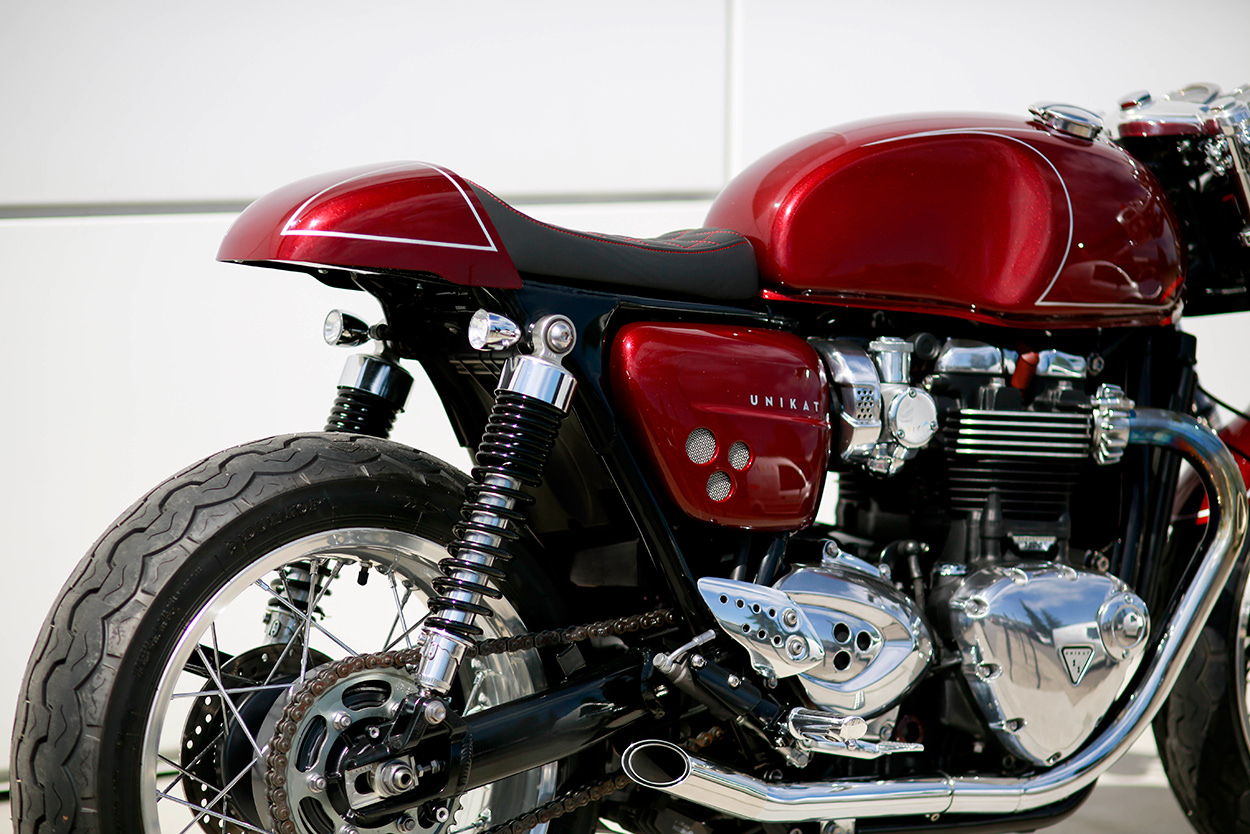 The Wrocław, Poland workshop have built a new seat and tail cover for the 2016-spec Triumph, and remodeled the back of the frame to get everything to flush-fit. 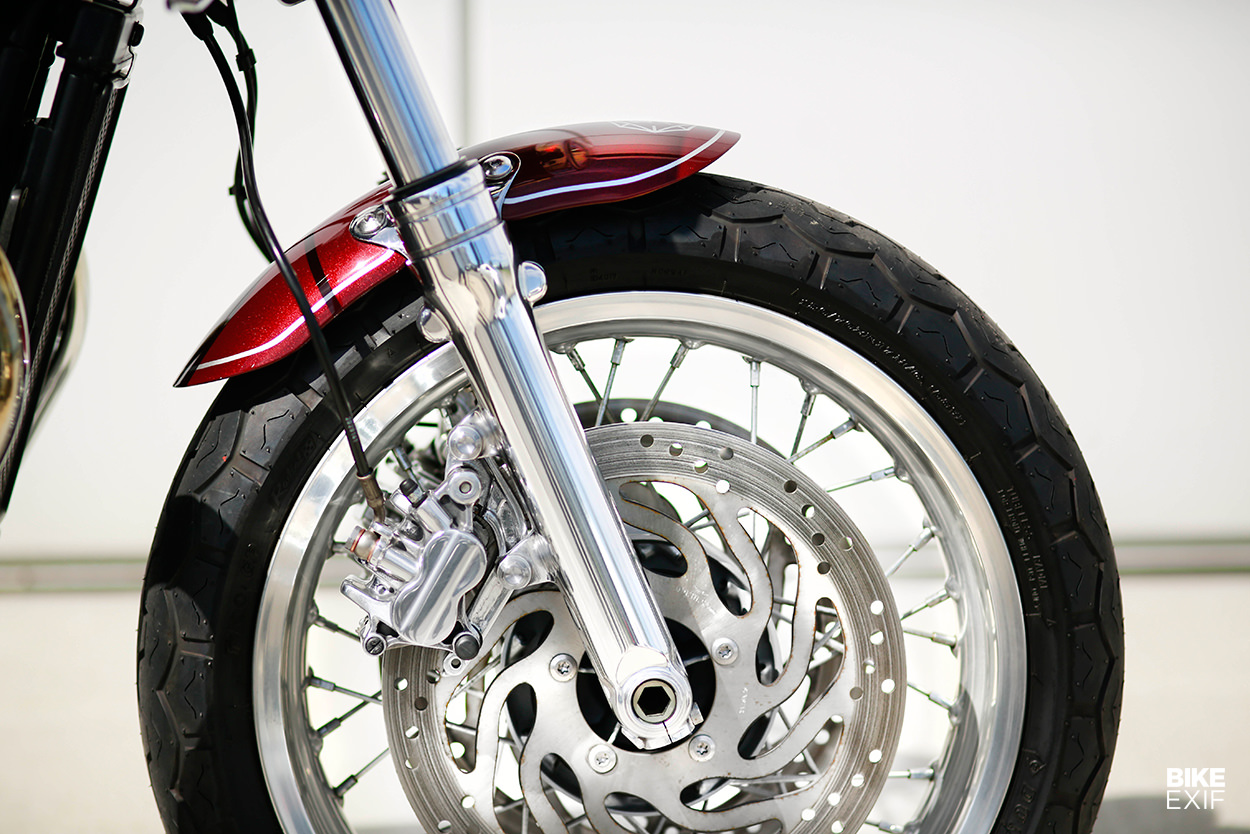 All visible aluminum parts have been hand-polished to a sheen, from the triple clamps to the fork stanchions, brake calipers and engine covers. Compact and shiny new mini-mufflers match the gleaming exhaust pipework.

After replacing the bulky stock ignition system with a keyless setup, Unikat spooned on a fresh set of Heidenau rubber and sent the bike off for a respray in a delicious Bordeaux red. 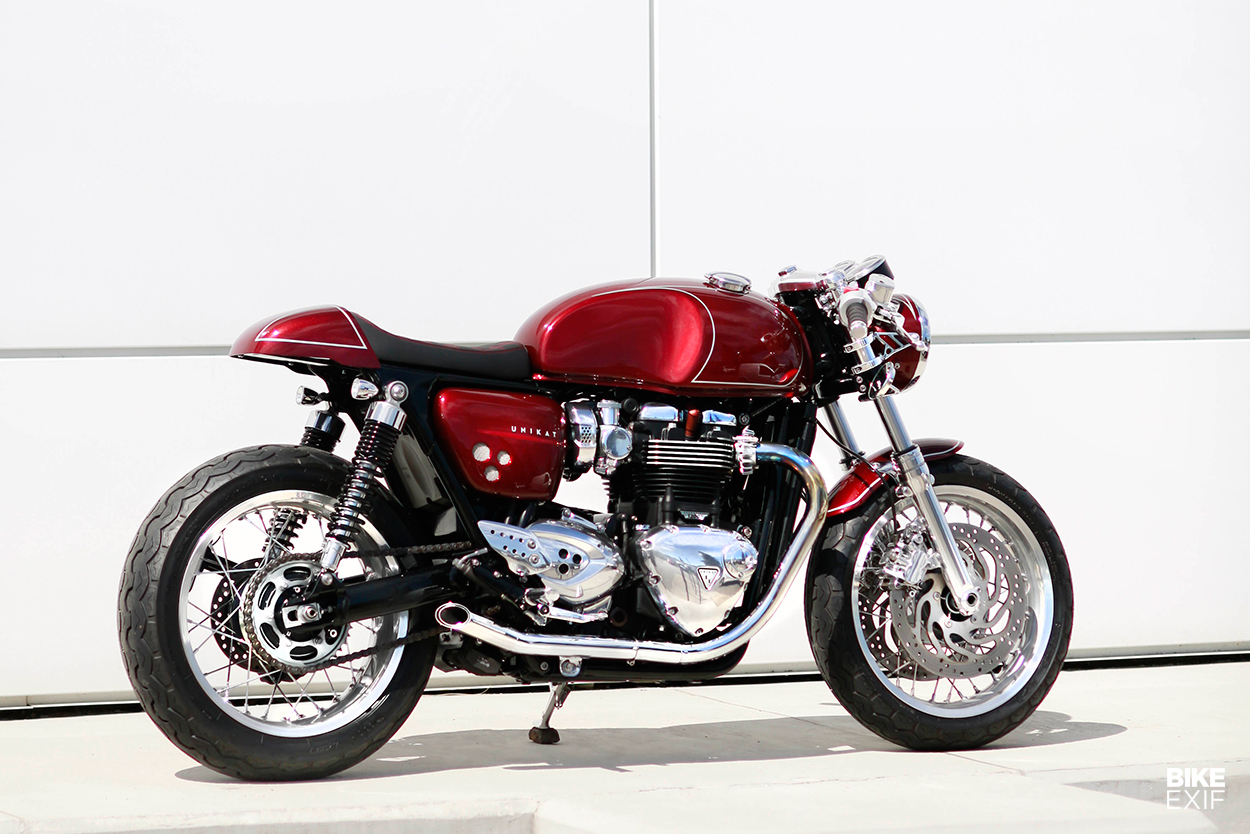 “In the shade it’s really dark, but in the sun it shimmers with bright sparks,” says Grzegorz. “I said to the client, if he ever sells this bike I want be the first one called. It rides (and sounds) like a sporty modern race bike.”

We reckon the owner would be foolish to sell this one any time soon—and when that time does come, there will be no shortage of takers. [Unikat Motorworks] 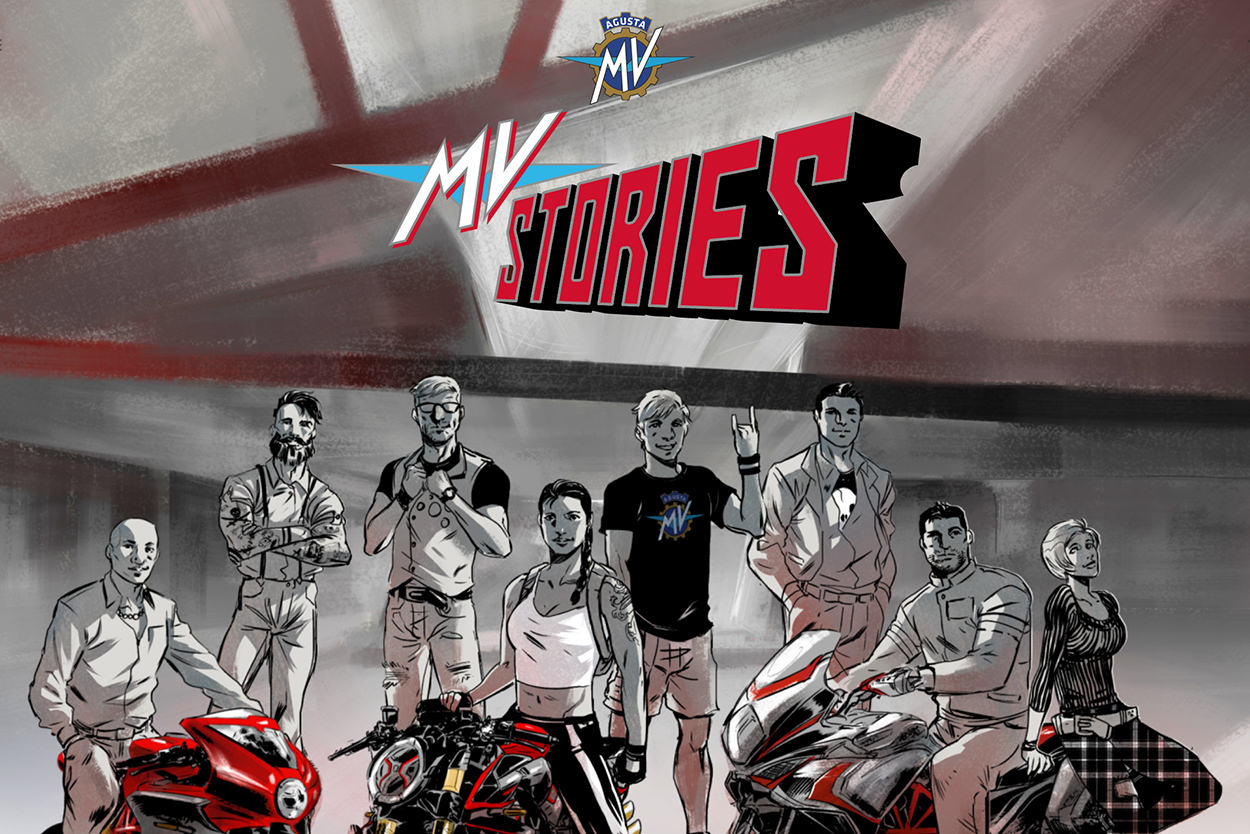 MV Agusta moves into comics In one of the most unusual marketing moves we’ve seen lately, MV Agusta has commissioned comic strips featuring its motorcycles—with each bike matched to “a character personifying its archetypal owner.”

Cesare, the star of the first episode, “is a rescue helicopter pilot who, in his free time, loves to roam the scenic mountain roads around the air base on his Turismo Veloce.” 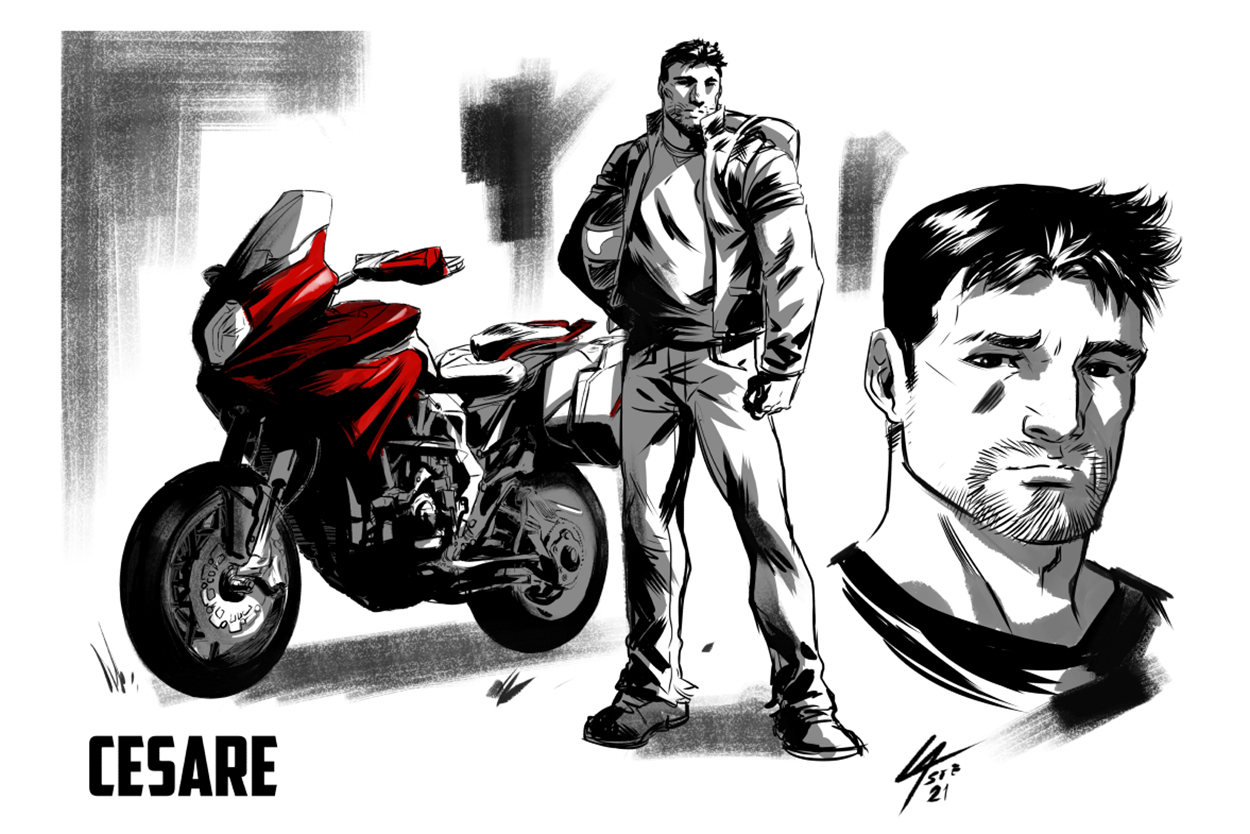 The project was developed with the help of one of Italy’s most prominent comic schools, with a style inspired partly by the noir tradition and partly by motorsports comic heroes from the 1970s.

We sense the hand of MV’s marketing director Filippo Bassoli, who is also the president of the Italian arm of the global custom powerhouse Deus—a company that is extraordinarily adept in marketing to motorcyclists. 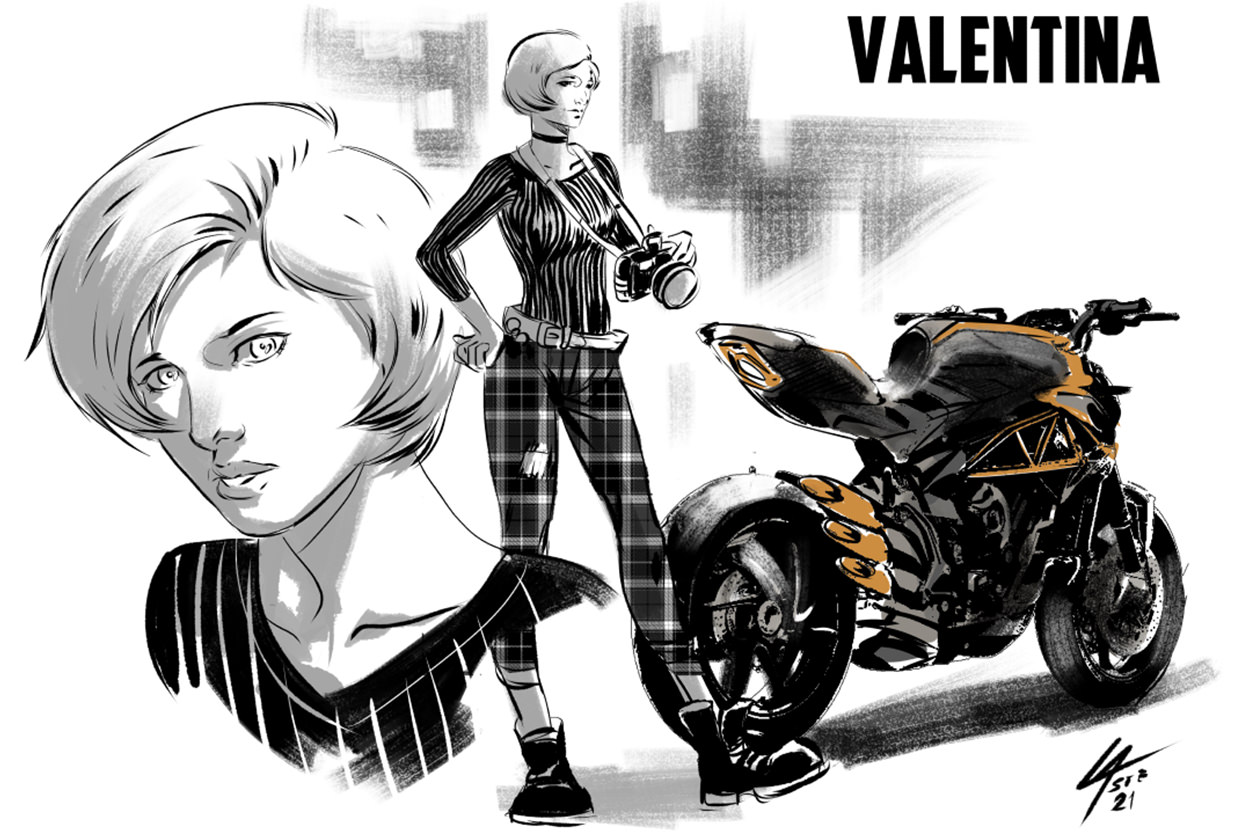 Bassoli is quoted as saying, “To capture new audiences and venture into new markets, you have to keep an open mind, and must not be afraid of doing things differently…This comic series is a small revolution in the way we have traditionally communicated our brand.”

As someone whose sole experience of the comic world was buying Viz magazine in England in the late 80s, I’m not well placed to comment on whether or not this will be a success for MV Agusta. But it’s certainly more interesting than most of the motorcycle adverts that I see. [MV Stories] 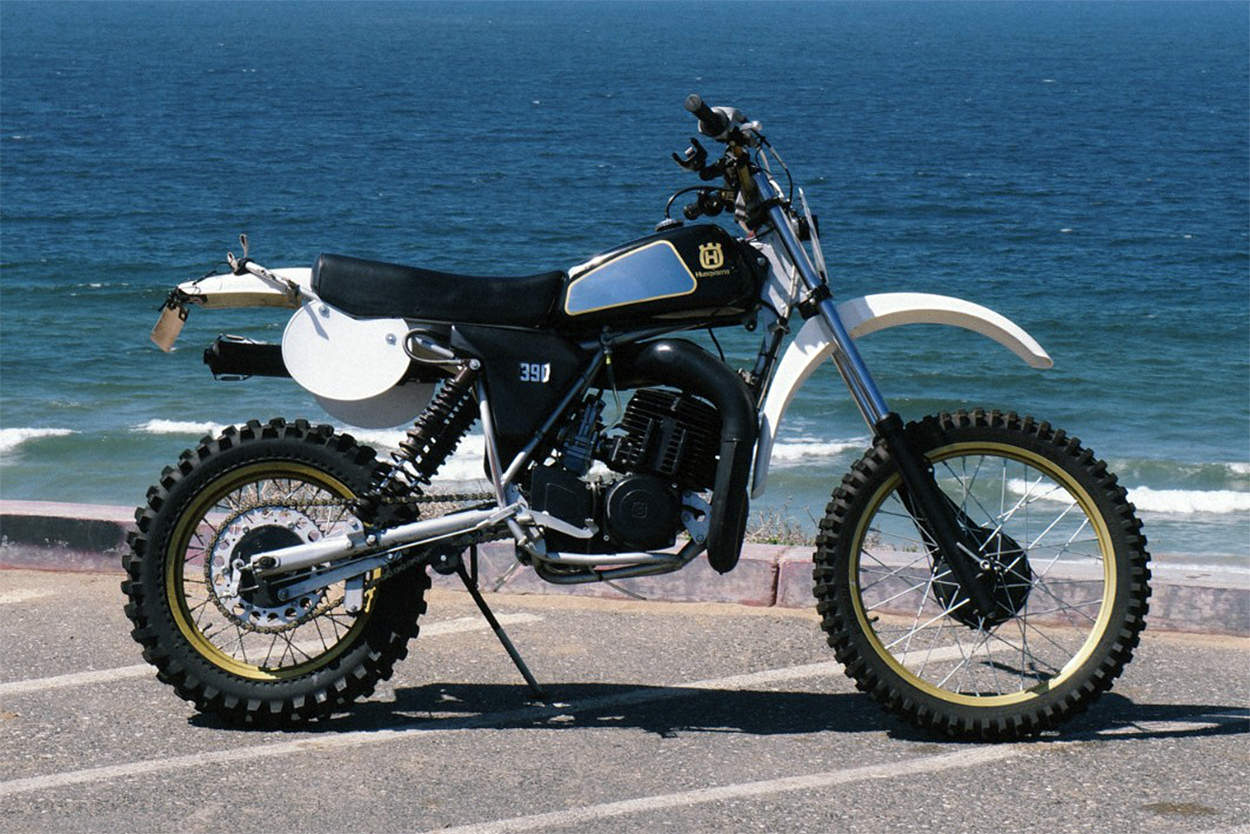 Husqvarna 390 OR by Emrah Gonulkirmaz In the late 70s, the Swedish brand Husqvarna sent a frisson of excitement through the off road world with its desert-oriented 384cc two-stroke. A six-month wait list quickly developed in the US, and for good reason—it was a brilliantly accomplished enduro with terrific suspension and an engine with a ‘lifetime guarantee.’ 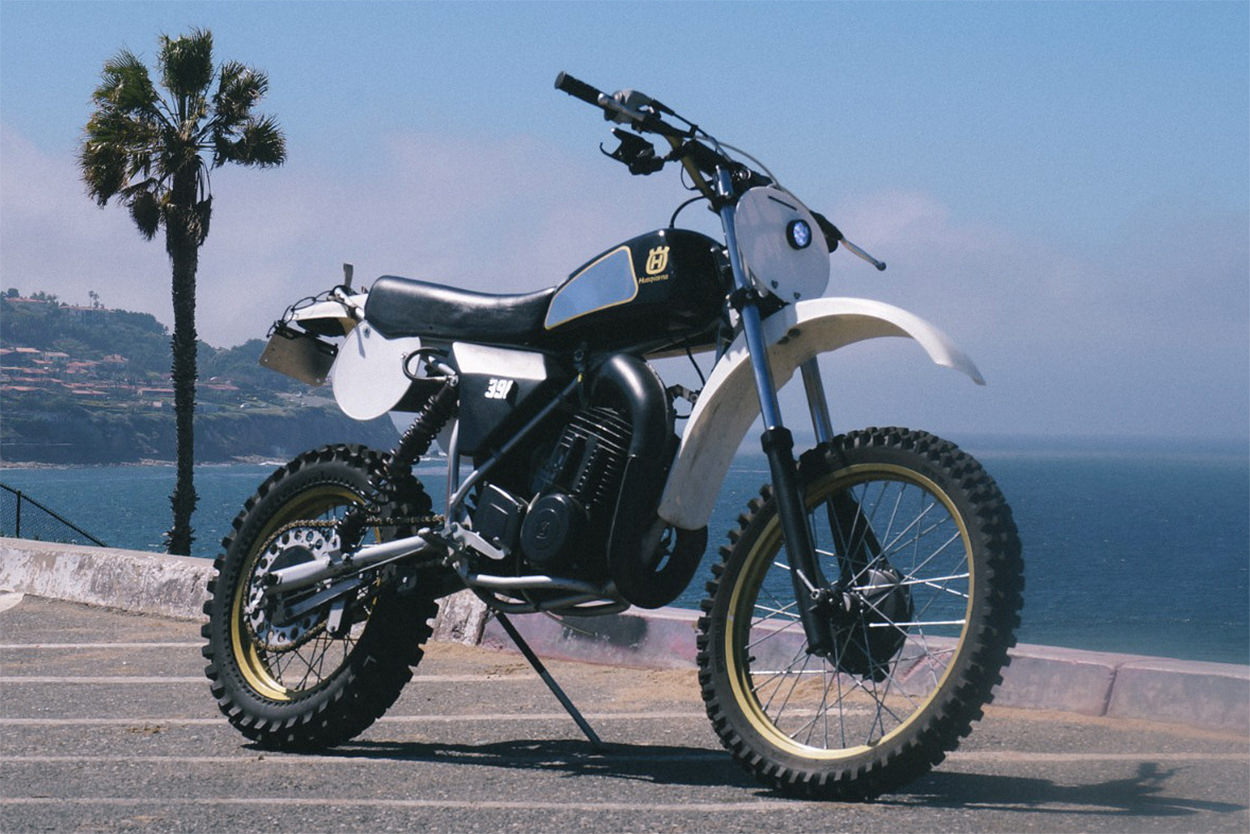 You don’t often see the 390 OR pop up on the secondhand market, let alone the custom scene, so this superb 1980-spec restomod left us drooling. Builder Emrah Gonulkirmaz is a creative director based in L.A., and his fine judgment and eye for detail is infused throughout the bike.

When he’s not working, he loves adventuring off road, and performance and reliability were the guiding points for this restoration. A good example is replacing the Mikuni with a Lectron carb, which does not need rejetting for altitude or temperature. 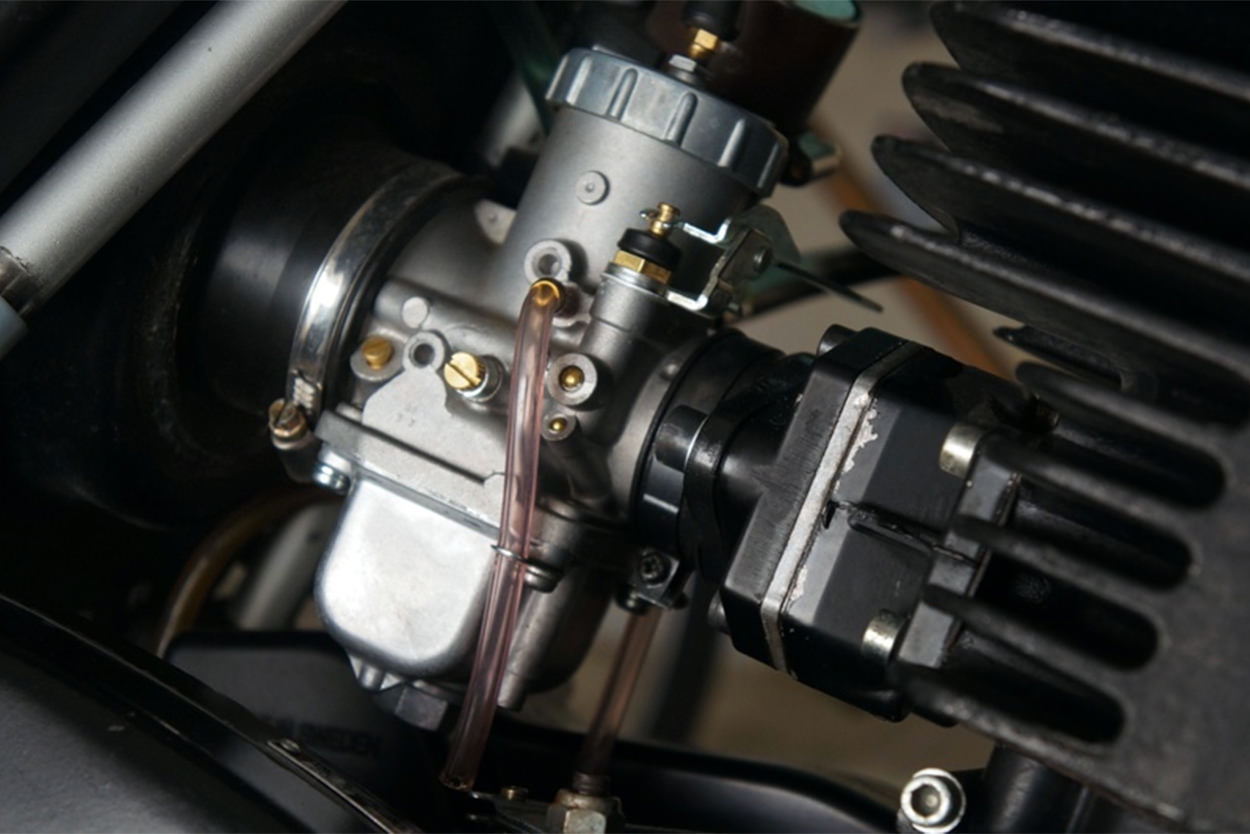 The Lectron is cabled up to a smooth Motion Pro Throttle, and there’s a a spark arrestor in the exhaust system to reduce noise levels (and keep the bike legal in California).

Emrah has also wired up front and rear lighting, signals, and a horn to a small rechargeable battery. In daily use it lasts him around a week, and can be removed for off-road use. 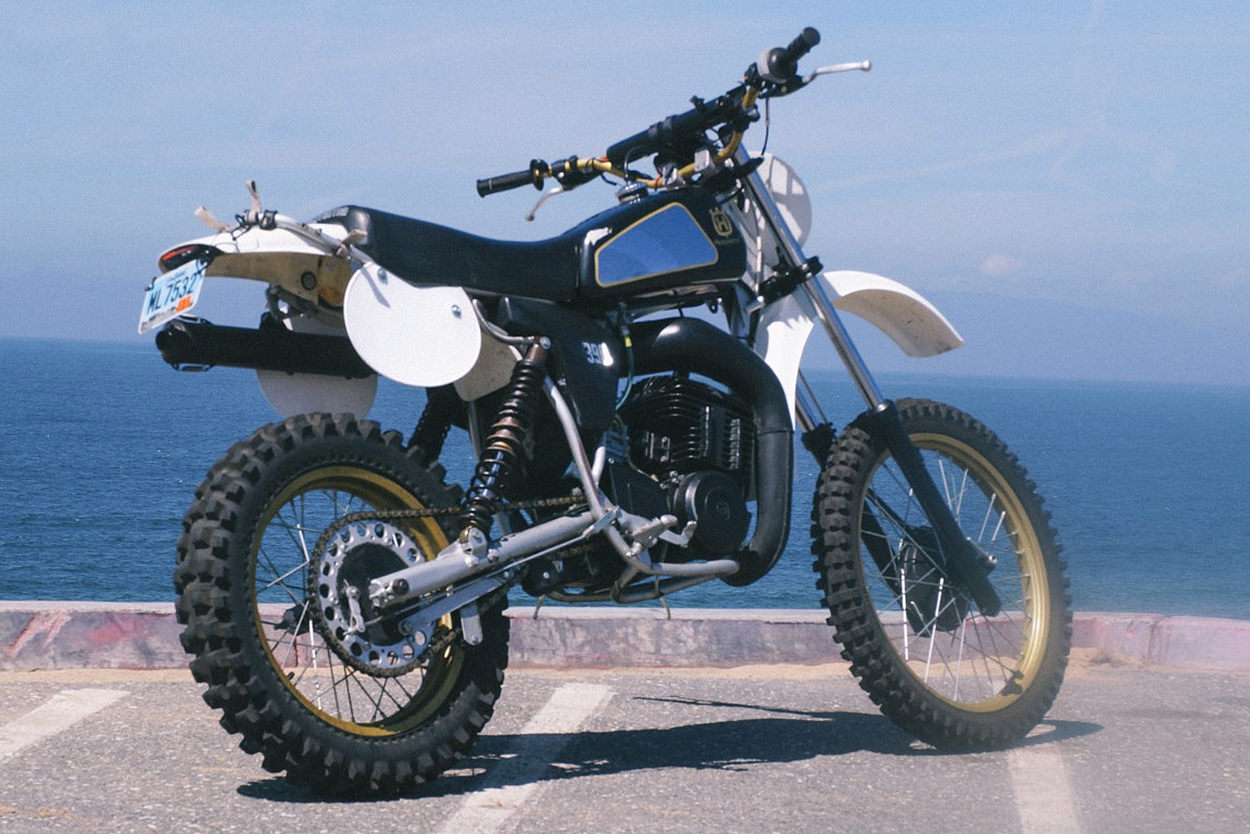 Emrah has also taken care of small details like installing fresh anti-vibration rubbers in the cylinder heads—which make a big difference to the smoothness of the ride—and changing the front sprocket to gear the bike a little higher for backroads. And, of course, those high-speed blasts through the Baja desert. [Via] 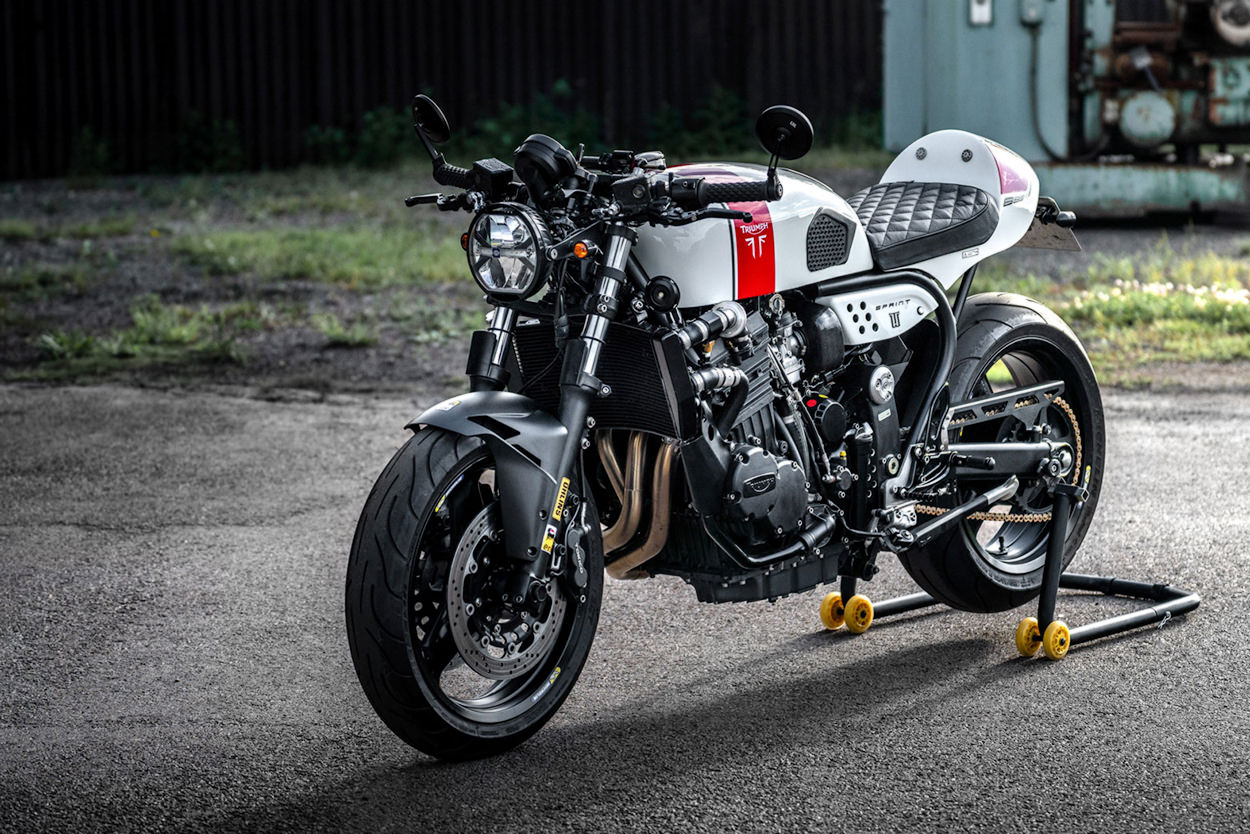 Triumph Sprint 900 by Tomas Wrede Tomas Wrede has an enviable list of bike builds under his belt. The Swedish-born Norwegian likes “taking care of bikes that others have given up on,” and usually focuses on boosting performance.

This 1997 Triumph Sprint 900 is now a cafe racer rather than a sport tourer, thanks to clever suspension tweaks and component swaps. Sprint ST fork stanchions and new Öhlins springs lower the front end and reduce the raked-out fork look; at the back are the swingarm and linkages from a Thunderbird 900, plus a new YSS shock to level out the stance. 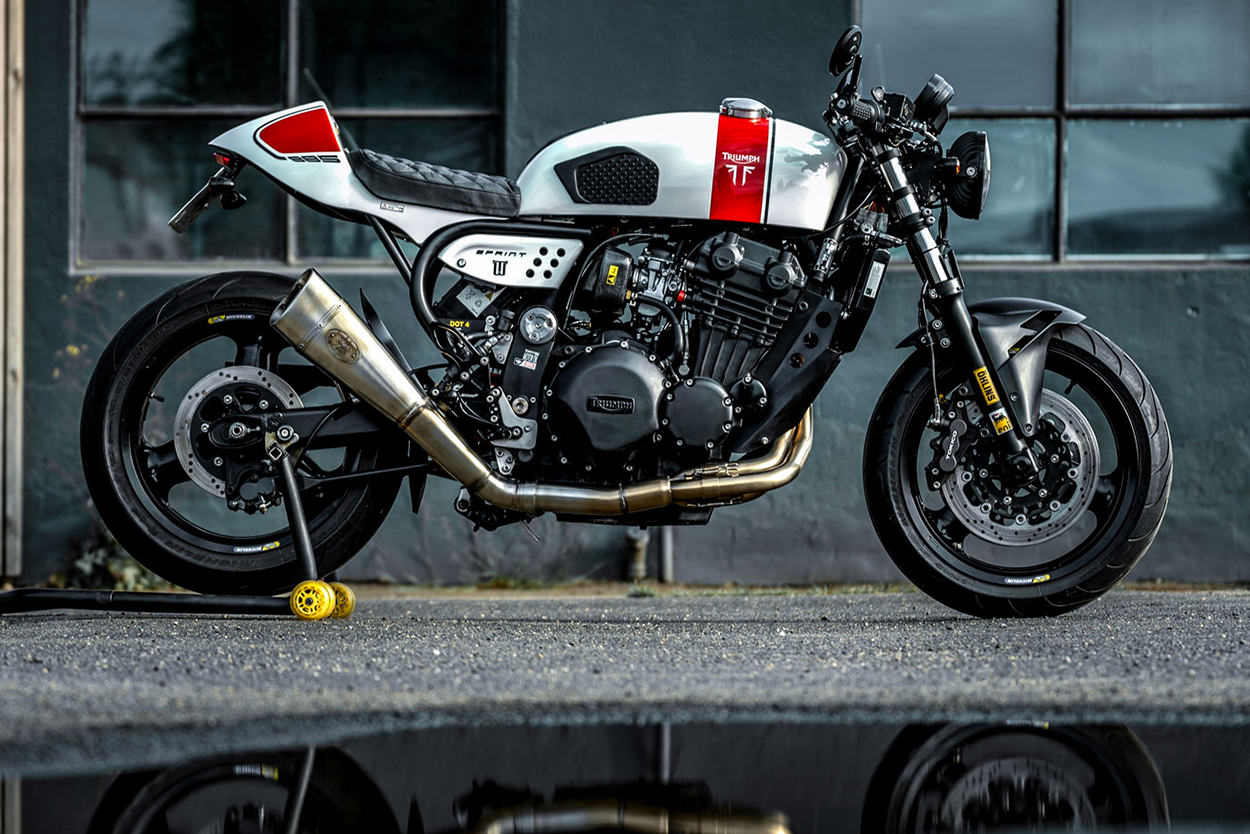 The 885cc triple has been ported, and treated to a customized Zard exhaust system with larger downpipes (made by Mr Martini) and a custom-made carbon fiber airbox. A curved Ducati 848 radiator helps the cooling and Kawasaki ZX9R front brakes increase the stopping power.

The classic styling is down to parts from the British company Cafe Racer Kits: a modified subframe kit, fuel tank, side panels and rear fender. After fitting, Tomas rerouted the electrics to house everything except the battery under the seat, and covered the subframe with a modified Norton Dominator tail unit. The front fender is an MV Agusta F3 unit. 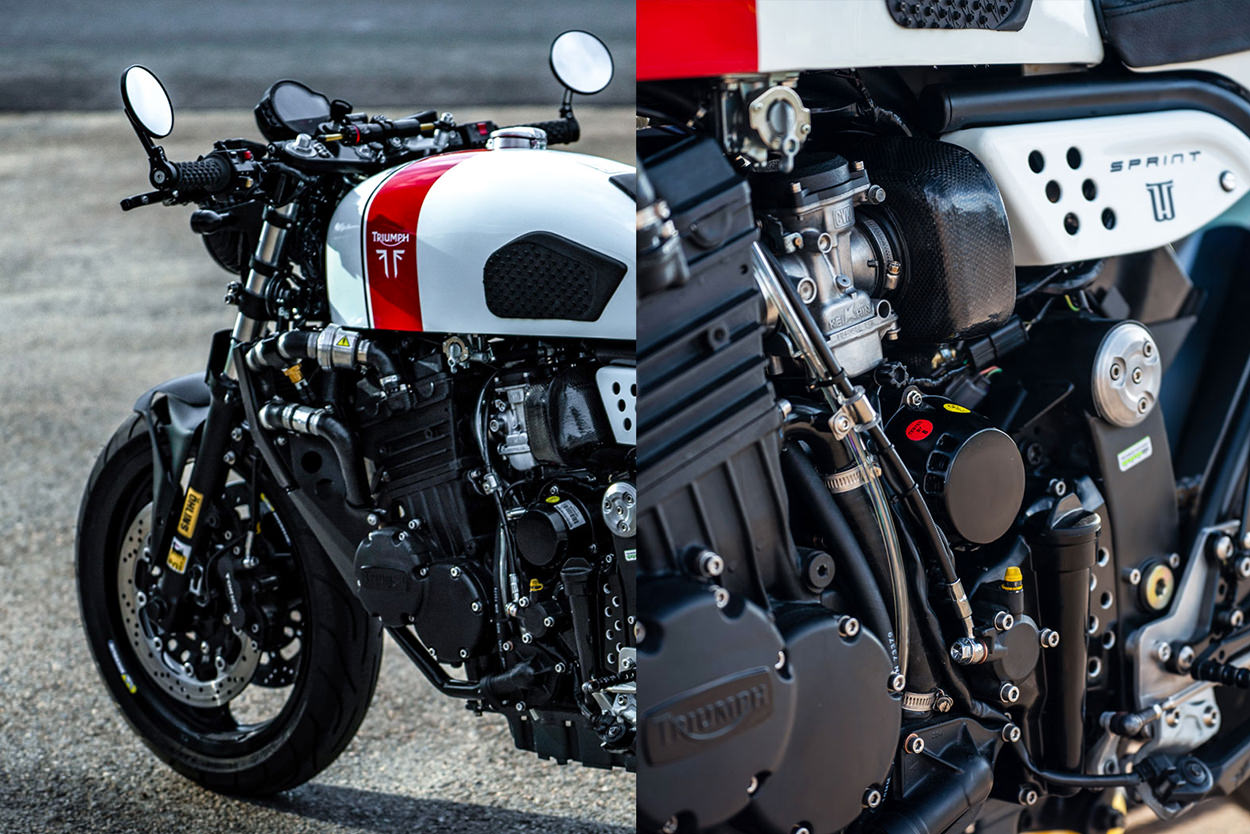 Being a meticulous chap, Tomas went through 20 different paint designs before choosing a white-and-Ducati-red livery. It took some time, but the looks are now worthy of the new-found performance. This is a Sprint that lives up to its name. [Via] 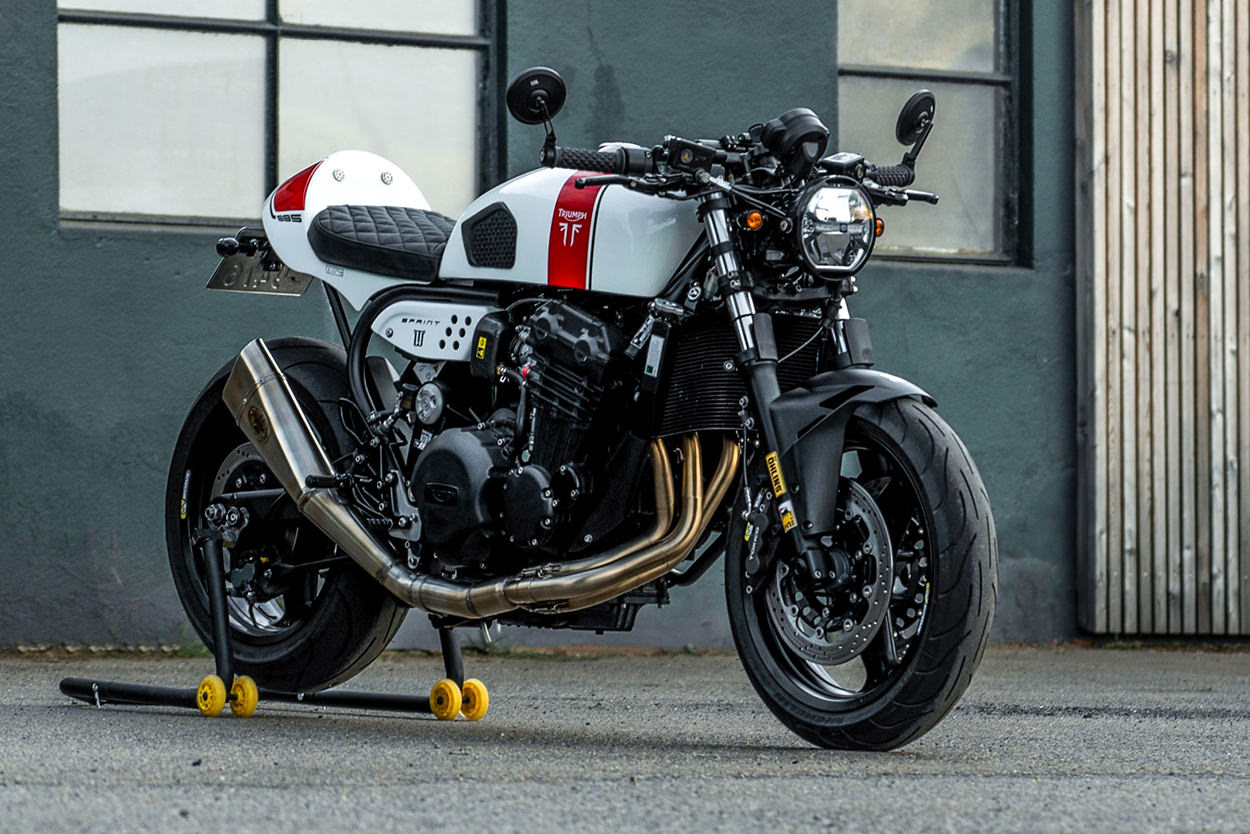