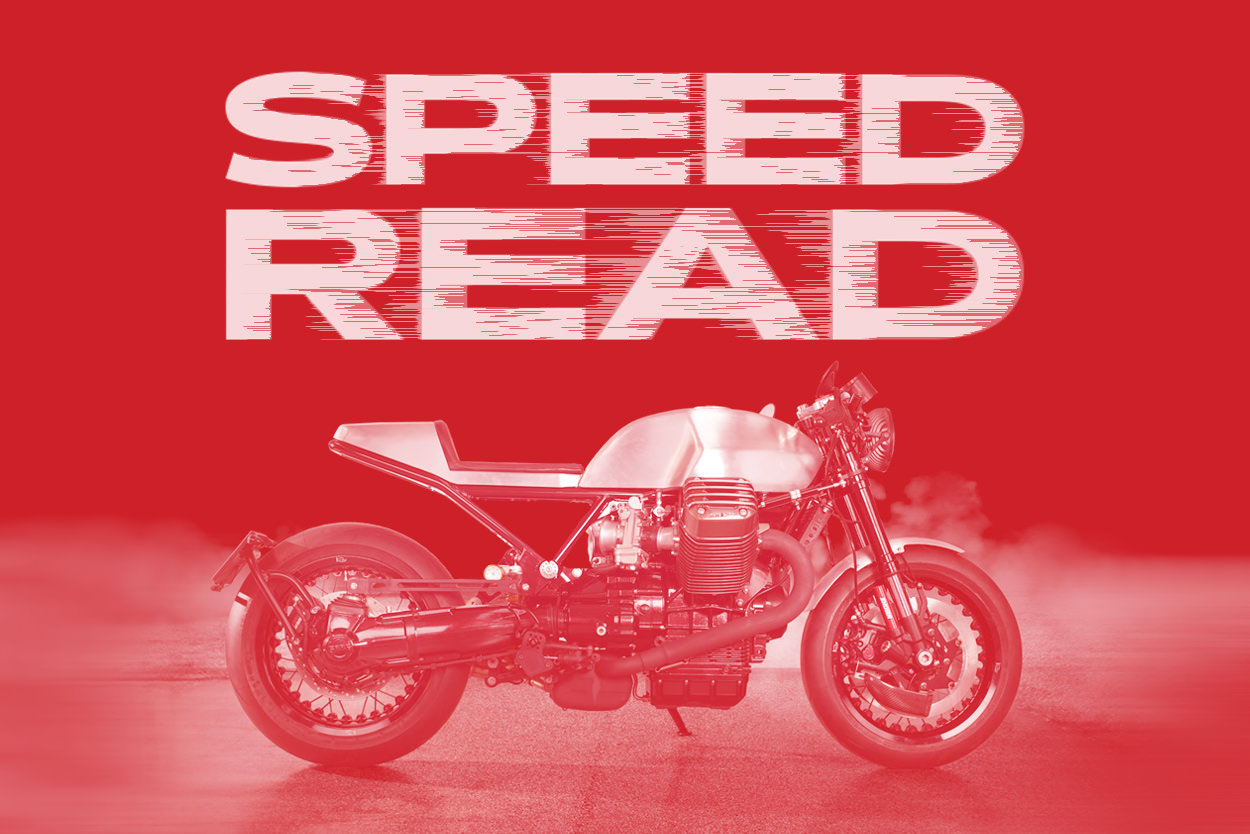 We’re launching into this week’s round-up with a radically reworked Moto Guzzi Bellagio, and finishing off with a look at the upcoming Moto Guzzi V100 Mandello. Wedged in between are a garage-built Honda CB450, a rescued Harley-Davidson Sportster 883, and a Royal Enfield 650 from XTR Pepo. 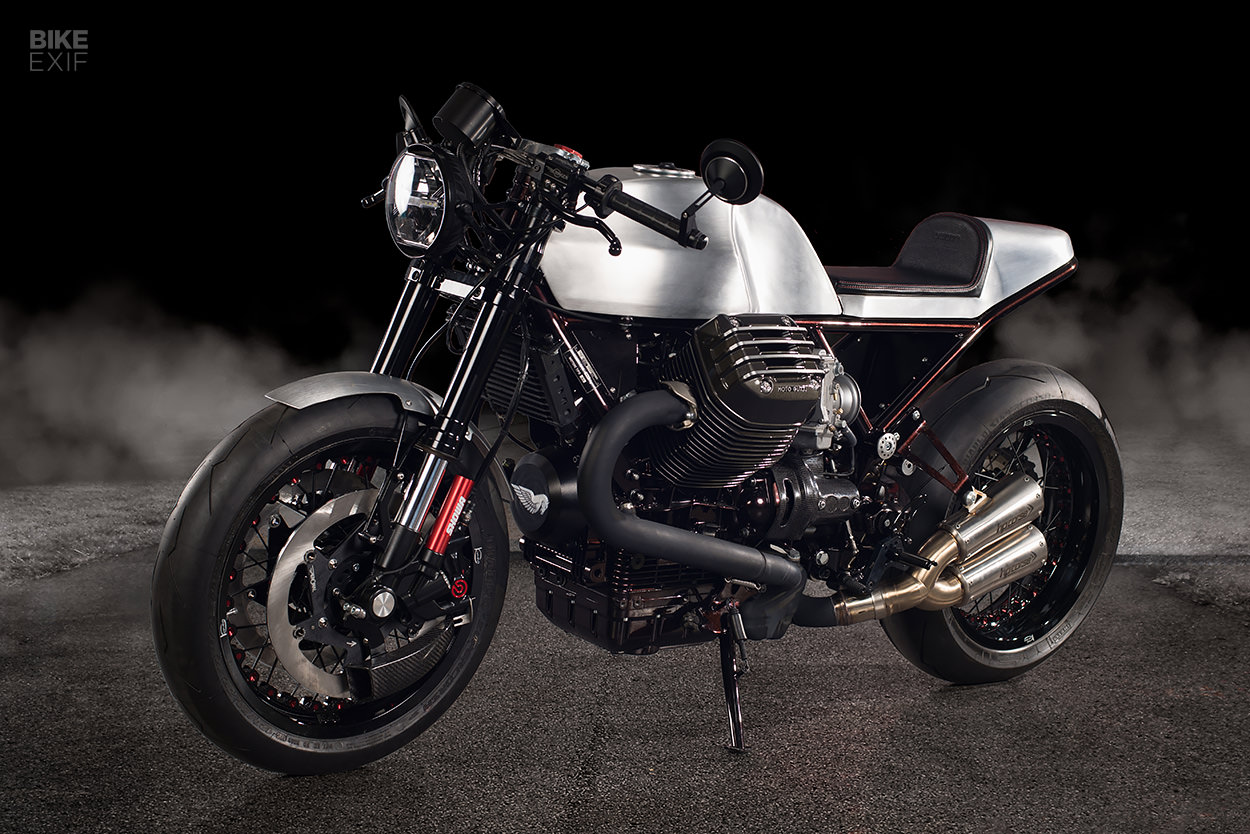 GMB’s work on this Bellagio is a double whammy; they’ve not only dramatically changed its silhouette, but also given it a boost under the hood. 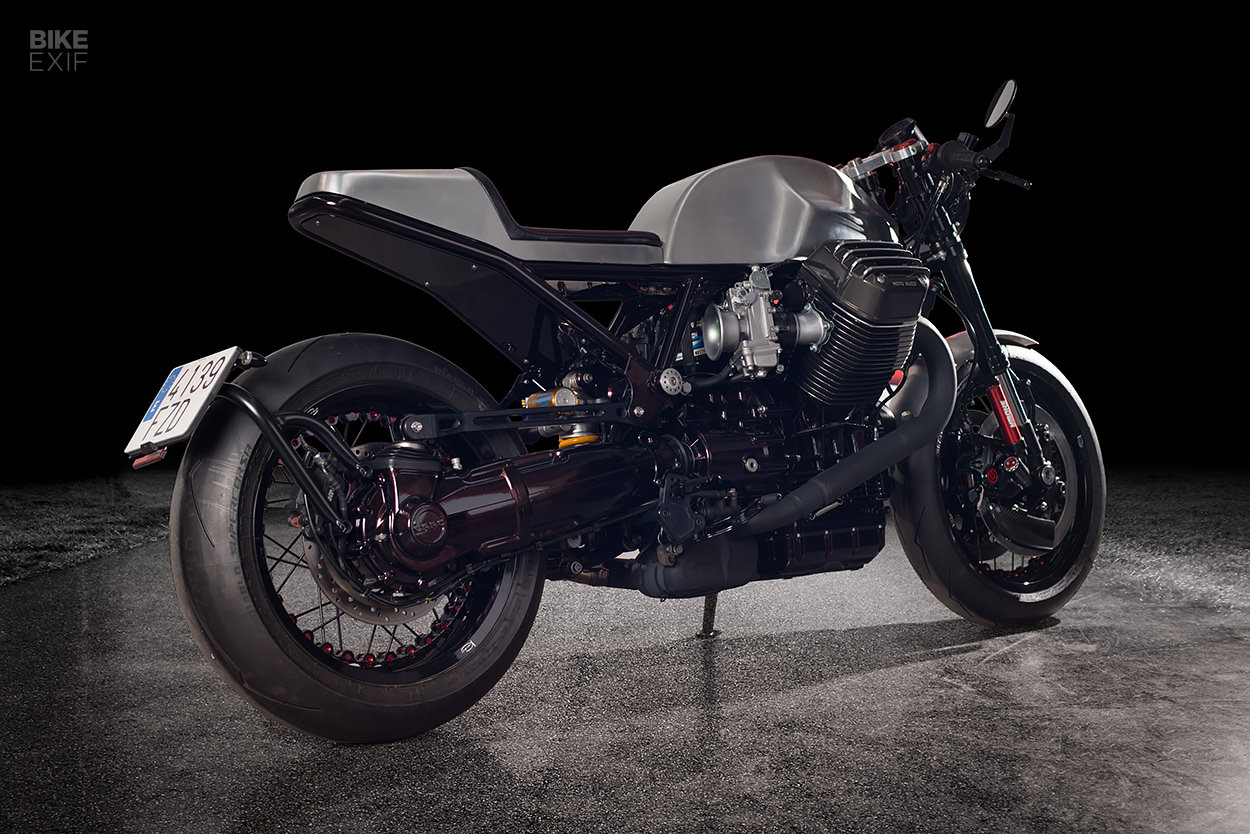 Using cylinders and pistons from specialist outfit Radical Guzzi, GMB took the motor from 935 cc to 1,500 cc, with four valves per cylinder instead of two. The team also converted the bike from fuel injection to a carbureted setup, and ditched the air box for a pair of velocity stacks. The stock exhaust headers were tweaked to run a pair of HP Corse mufflers.

The running gear’s been upgraded too, with the Showa forks from a Kawasaki ZX10R up front, and a custom built Öhlins shock out back. 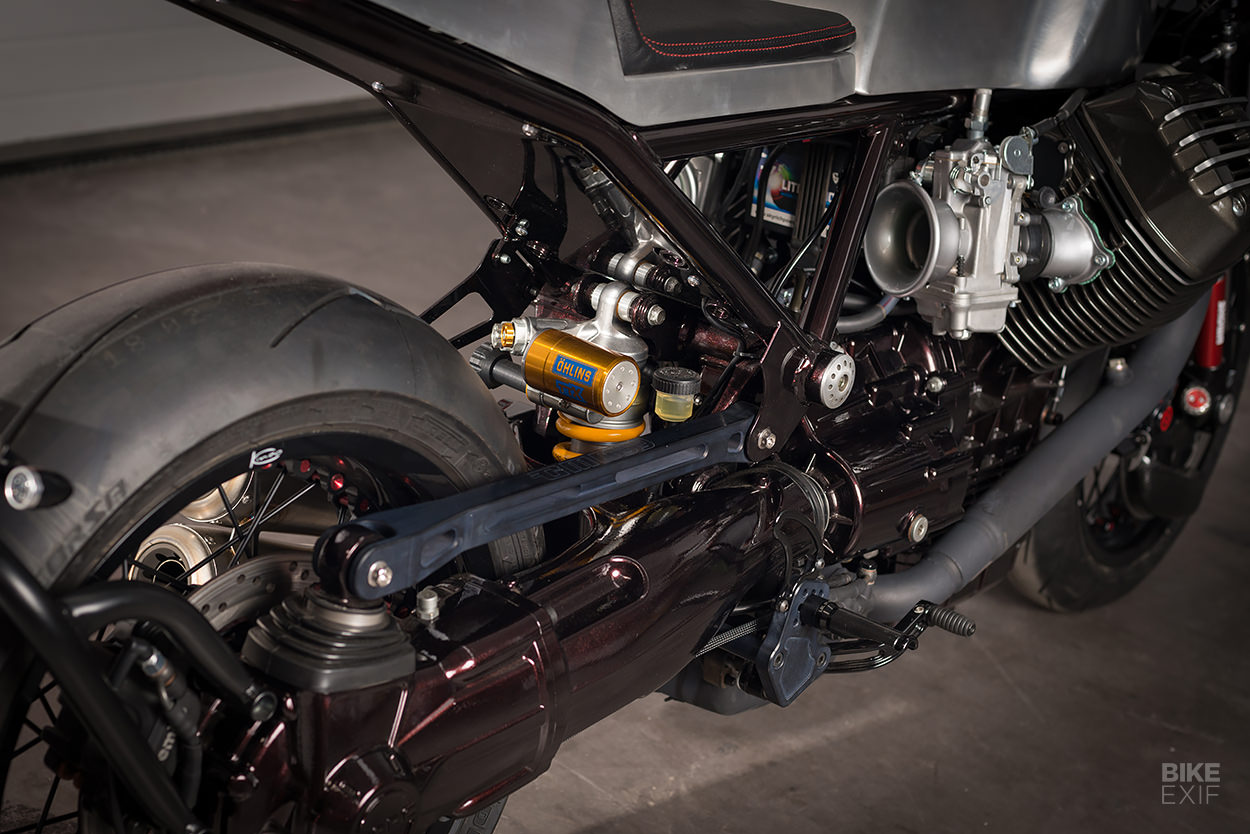 The wheels are stunning 17” spoked units from Kineo, and the brakes are Brembos, complete with carbon fiber cooling ducts on the front discs. It wasn’t all plug-and-play though: GMB boss Manel Segarra reports that matching up the front forks, wheel and brakes took a lot of fiddling.

Higher up, GMB built a whole new subframe to sharpen up the Bellagio’s lines. The fuel tank and tail section, plus the front fender, are all custom pieces. “A close friend, German Dervidson, made them for us,” explains Manel. “We made the pieces in a special foam, and German replicated them with aluminum.” 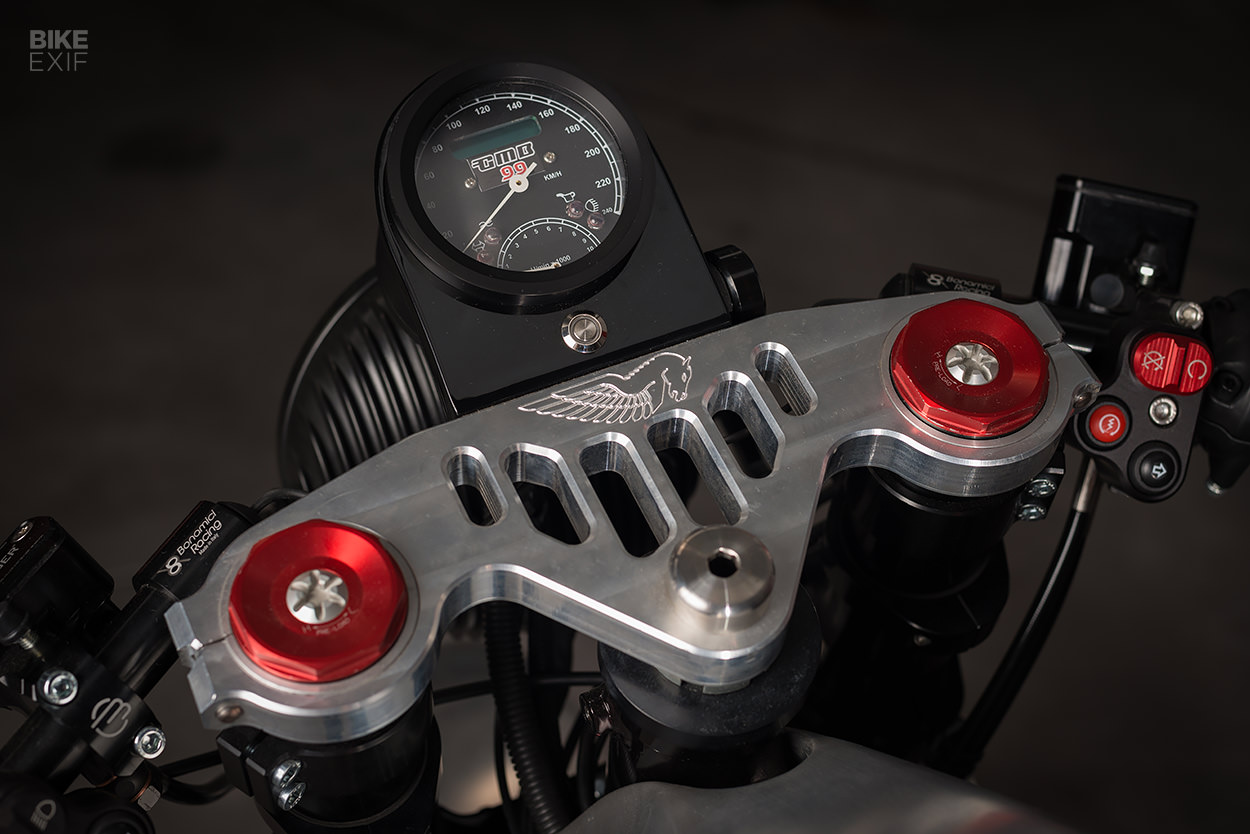 The Guzzi also wears new rear sets and foot controls, with clip-ons, Beringer levers and switchgear from Renard Speed Shop up top. Other add-ons include new yokes, a small GMB speedo and an LED headlight. A custom carrier at the back holds the license plate, along with a pair of combo taillight and blinker LEDs. [Guzzi Motobox] 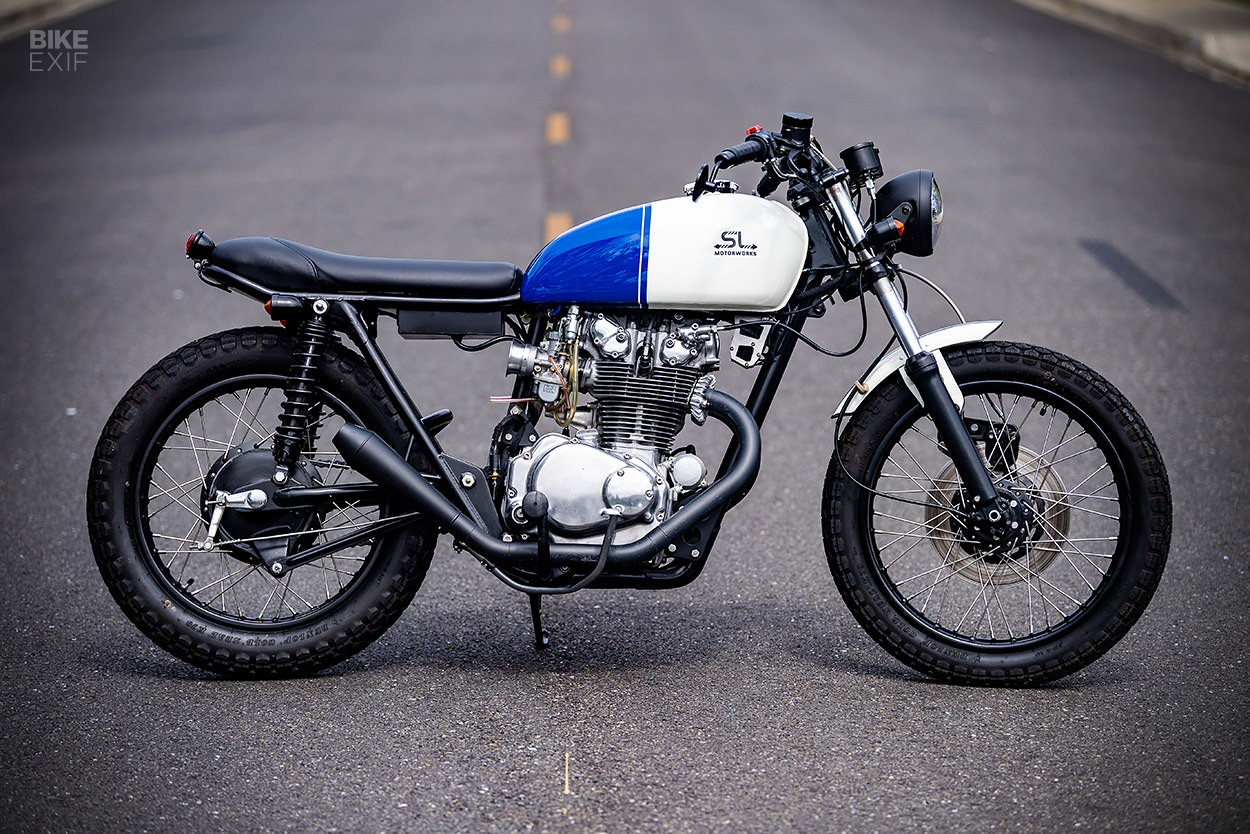 Honda CB450 by Scott Loyet There’s something special about hobby builds, and the blood, sweat and tears that are poured into them. This tastefully stylish Honda CB450 cafe racer is Scott Loyet’s first build—a project that took him four years to complete, because he resolved to only work on it when he “felt like it.” And it’s a pretty remarkable first effort.

Scott picked up the 1973 CB450 around the same time that his friend, Cory, also started working on a 70s-model CB. 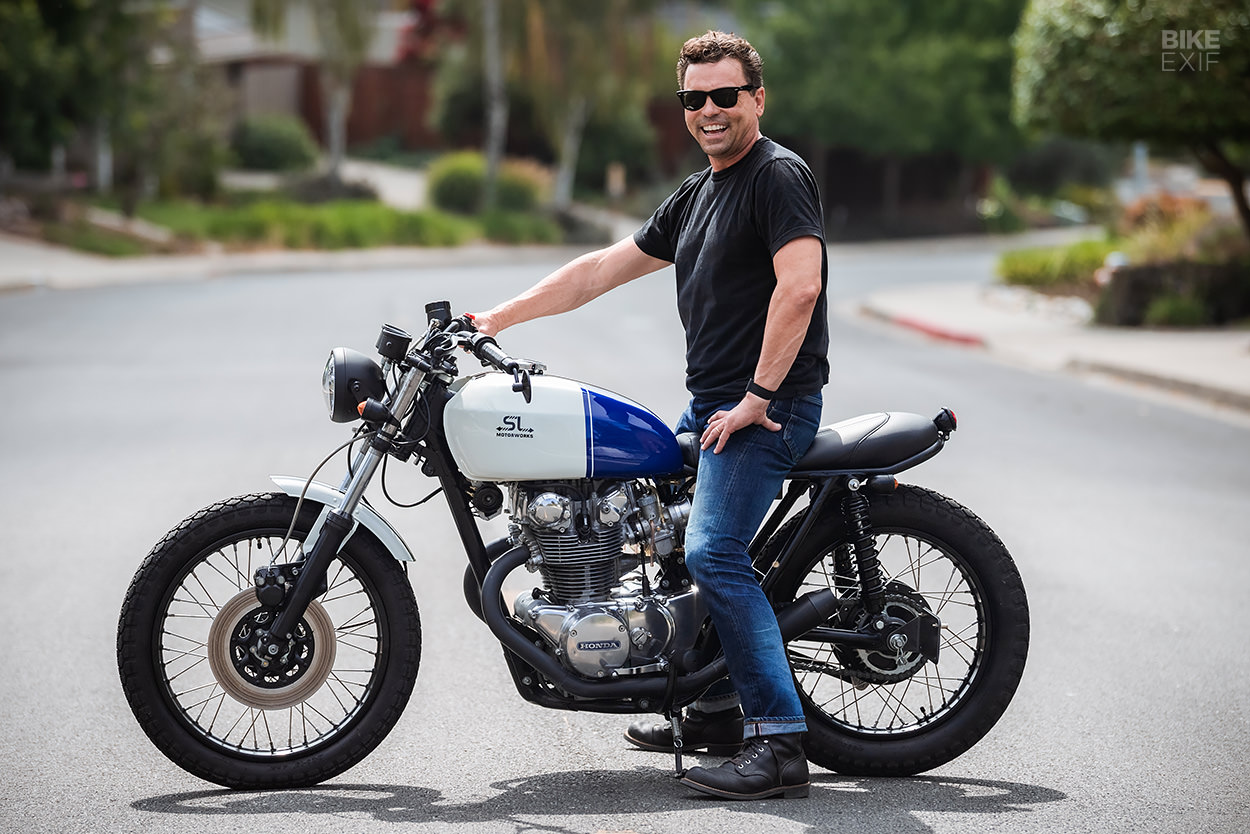 “Cory has been my ‘Yoda’ throughout this project,”says Scott, “a man who has been around engines and motors all his life. My dad was a grease monkey, and I always admired the way he could fix anything on our family cars—and frankly, anything around the house, including hair dryers!”

“With no mechanical experience and new time on my hands since my kids had gotten older, I embarked on ripping apart my first bike. As my dad said to me, ‘you learn more from your mistakes’ and I learned A LOT. With parts and assistance from not only Cory, but also Dime City Cycles, Common Motor Collective and lots of YouTube videos, I was able to get over the finish line.” 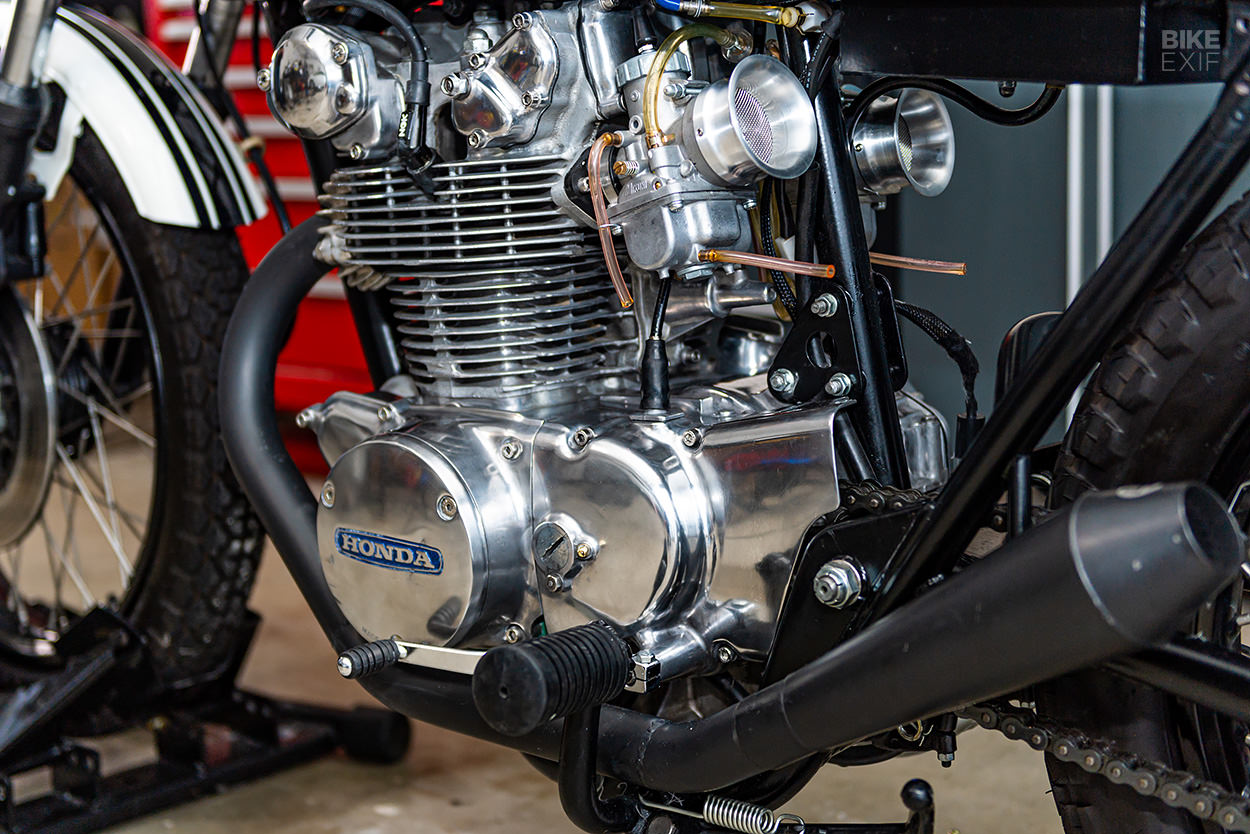 Scott first stripped the bike down, then sent a bunch of parts off for fresh powder coating. The engine was refreshed with new valves and top end gaskets, and is now hooked up to Mikuni V32 carbs with velocity stacks from Speed Moto. Sparck Moto supplied a new wiring harness, and Scott installed an electronic ignition, new coils and plugs, a rebuilt starter, a Lithium-ion battery and a new regulator and rectifier.

Scott refreshed the front forks, but replaced the rear shocks with a new pair of Progressive units. The brakes were rebuilt, and the wheels re-laced with stainless spokes from Buchanan’s. Up top are new bars with wrapped Trip Machine Co. grips, and new dials. And all the lighting’s been replaced with LED units. 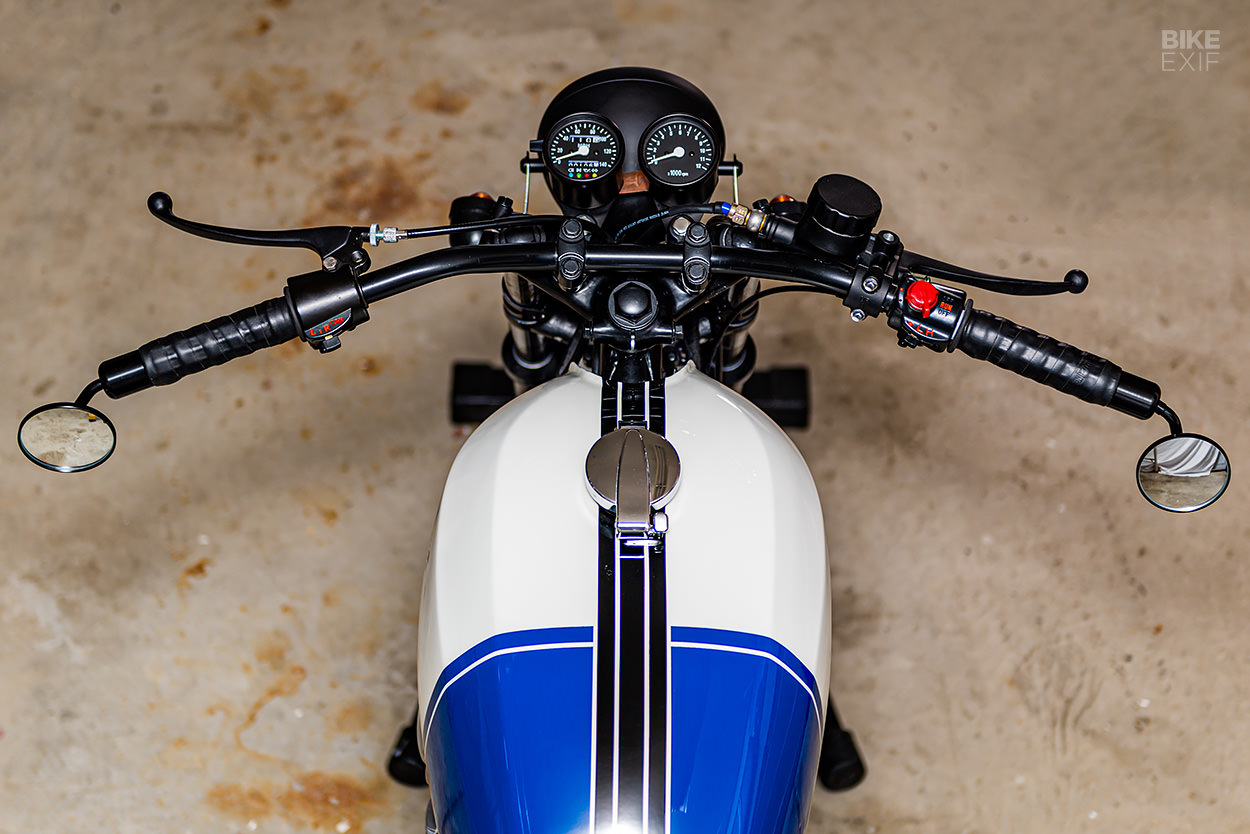 Scott had help along the way. CJ at Pullman Fabrications handled the custom battery box, rear loop and frame reinforcements, and built the new exhaust headers, which are connected to Lossa Engineering mufflers. Aaron at Pleasant Hill Auto Body massaged the fuel tank so that it’d transition with the seat better, Brian Jennings handled paint and Armand’s Auto Upholstery covered the seat.

“This bike was therapy for me,” says Scott, “with endless hours cleaning, shining and building. In the end, it is a tribute to my dad and an heirloom for my son or daughter.” [Images by Shirley DeFrancisci] 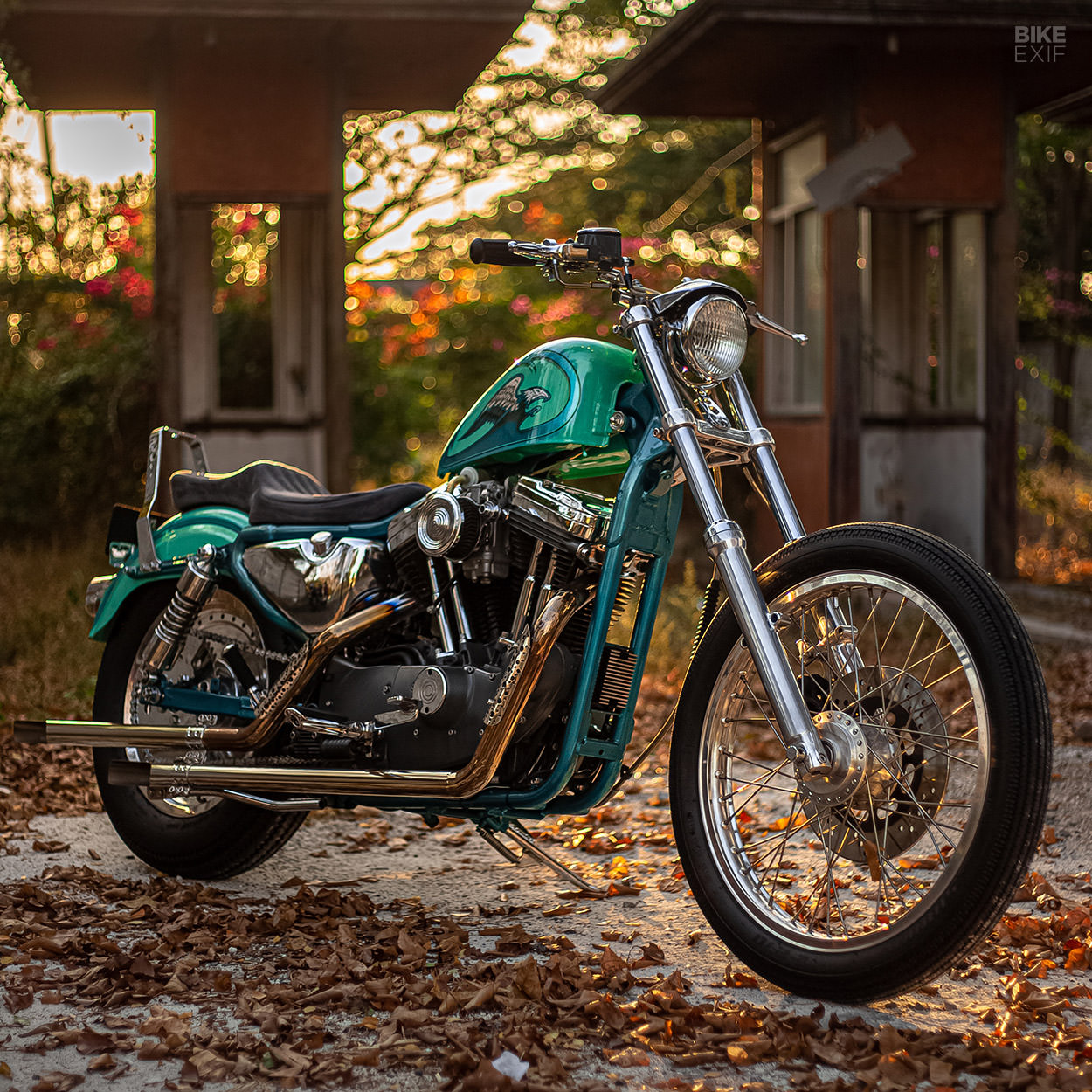 Harley-Davidson Sporster 883 by Minority Custom At a glance, this 2000-model Sportster 883 from Indonesia’s Minority Custom doesn’t break any major new ground. But it is very pretty and extremely tidy—impressive, when you consider that it started out as a wreck.

“’Simplicity is beauty’ is what our garage strives to show in our designs,” explains shop boss, Jonathan Evan. “We found this motorbike in a dull and damaged condition. Some parts of the engine were leaking and broken, oil was everywhere, and it had malfunctioning rear brakes and broken pistons.” 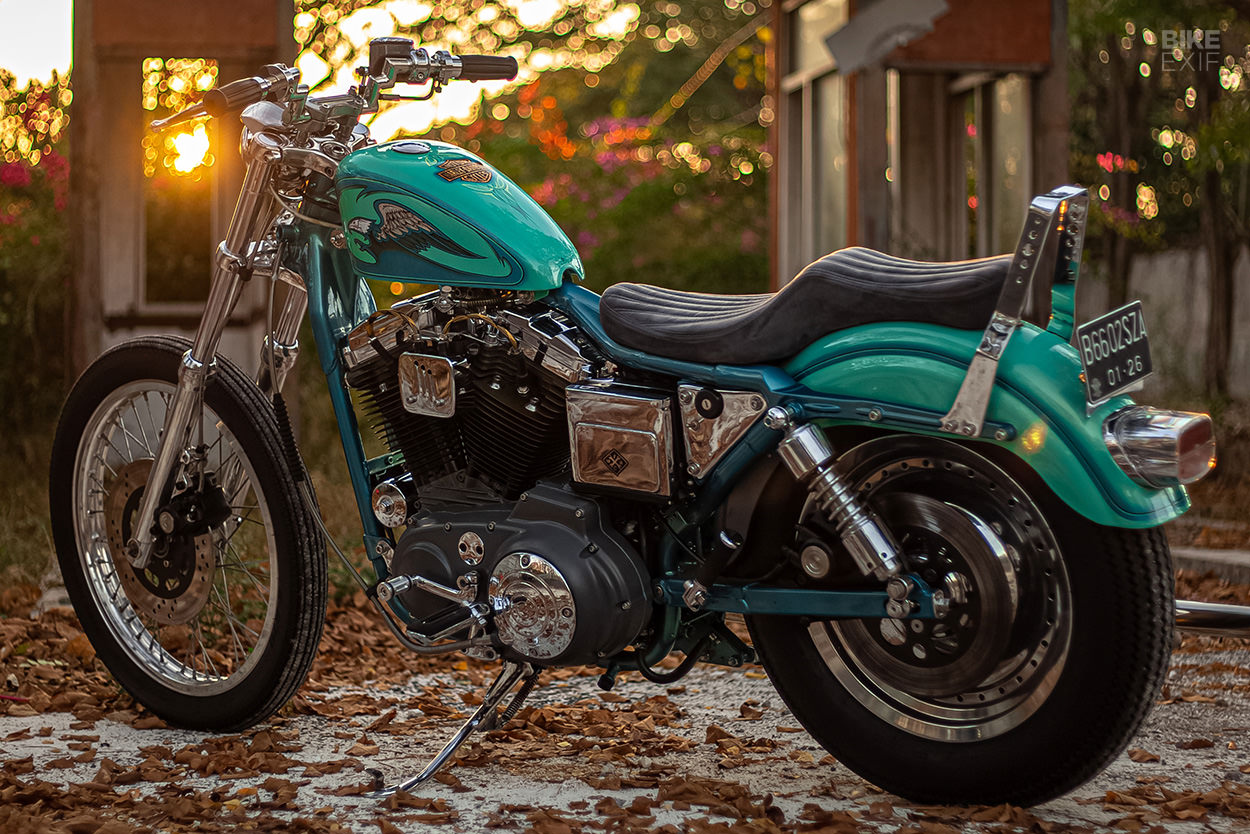 Minority rebuilt the Sporty inside and out, making a number of changes along the way. The crew wanted to give it a slight chopper stance—so they stretched the front forks and swapped the front wheel for a 21” hoop. There’s a solid 16” rear wheel at the back, hooked up to a custom-made sprocket.

Next, the OEM fuel tank was cut-and-shut to shrink it, and to make it sit tighter on the Harley’s backbone. Behind it is a custom leather seat, and behind that, a hand-made mini sissy bar that adds a touch of chopper sass, without going overboard. 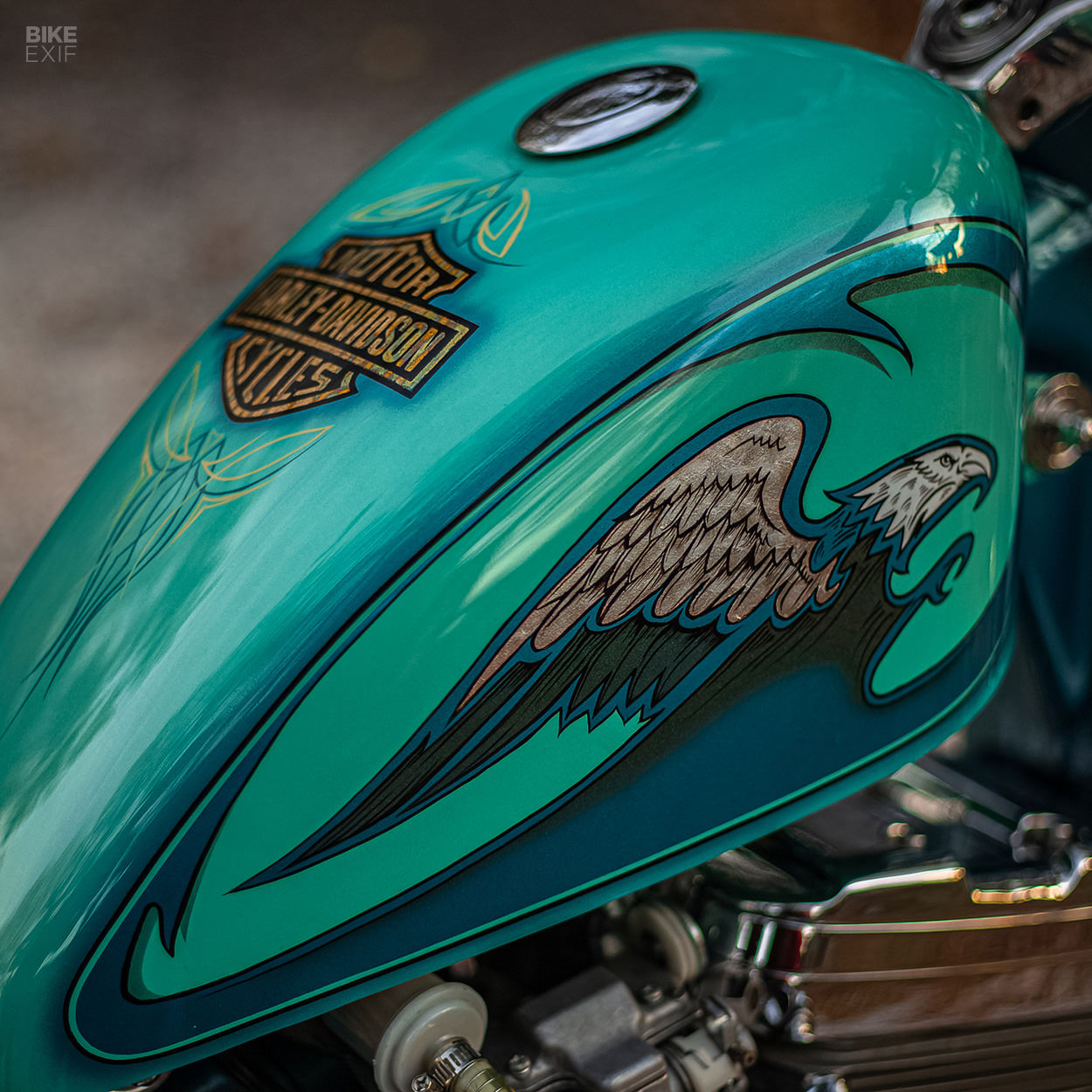 Up front, tucked under the standard-issue Sportster headlight nacelle, is a smaller-than-stock light mounted on a custom-made bracket; a neat touch that most eyes won’t notice. The handlebars are one-offs too, as are the stainless steel slash-cut exhausts.

Top marks to Minority for the lush color scheme too—the frame’s been done in turquoise, with some green hues mixed in on the bodywork, and a smattering of chrome. The tank bears the shop’s own unique take on the typical Harley eagle motif, and was completely executed by hand. [Minority Custom | Images by Val Willson] 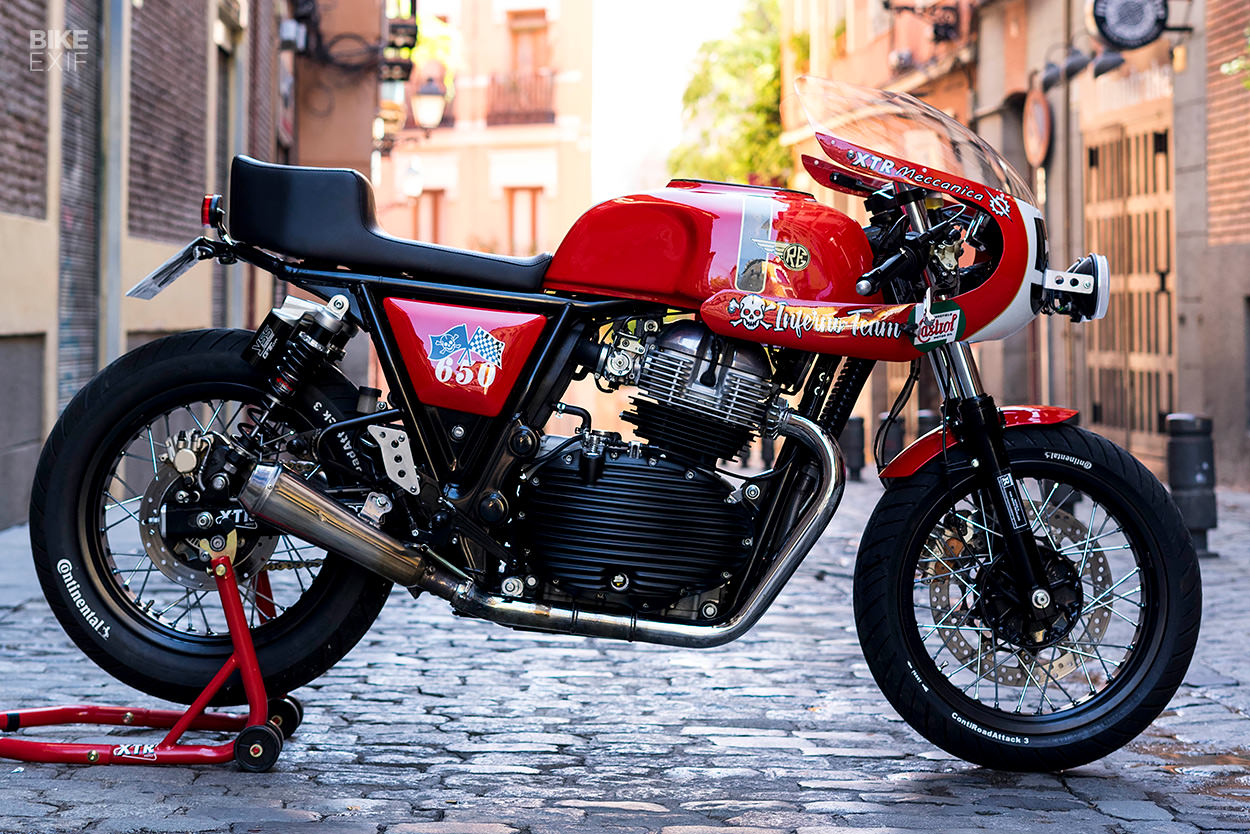 This 2019-model Continental GT 650 is sporting a number of signature XTR Pepo touches—not least of all its heavy endurance racing vibe and protruding headlights. They’re mounted just forward of a custom fairing, which in turn sits on custom brackets. 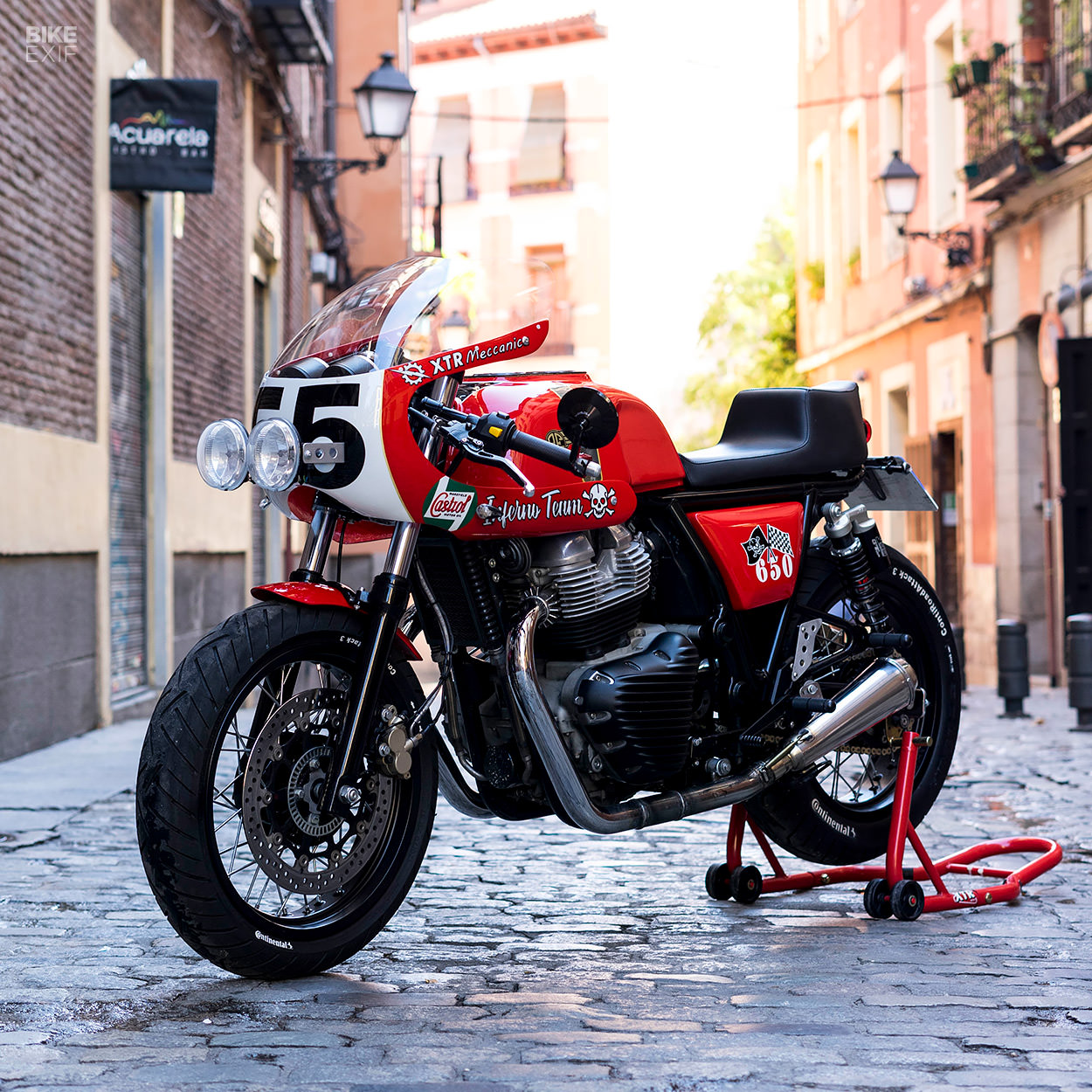 Tucked behind are a CNC-machined top yoke from Riga Billet Parts and XTR Pepo clip-ons. The quick-throttle and right switches are from Domino, the brake master cylinder is a Brembo item, the clutch assembly is from a Suzuki GSX-R, and the levers are CNC-machined XTR Pepo parts. There’s also a new oil temperature gauge, and foot pegs and controls from K-Speed in Taiwan. 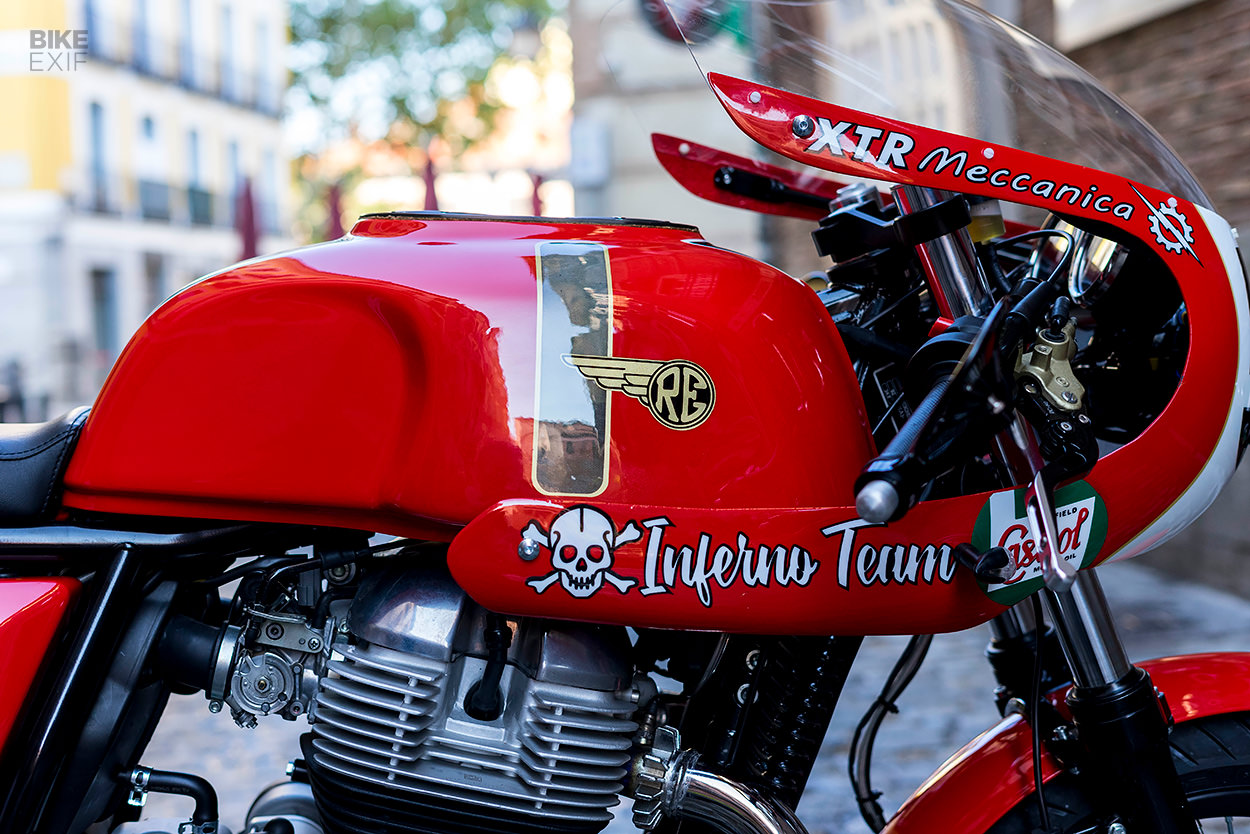 The custom fiberglass fuel tank lightly mimics the original design, but has a transparent strip on the side for checking levels, and an aluminum filler cap from ACC Endurance. The solo seat is Pepo’s design too, and the subframe’s been modified to match it.

Pepo replaced the rear shocks with new ones from YSS, swapped the 18” wheels for 17s, and shod them with Continental Road Attack tires. The exhaust headers have been shortened and now exhale through a pair of Turbokit megaphones. 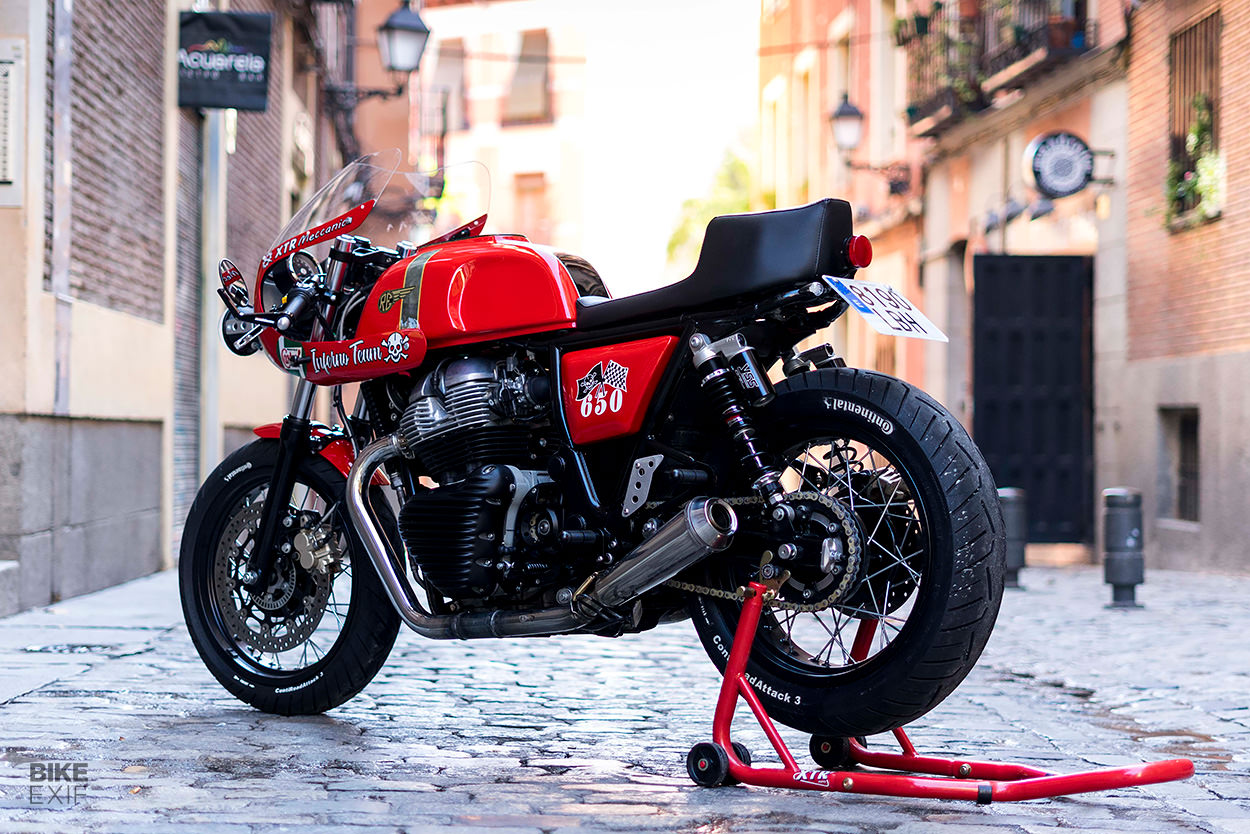 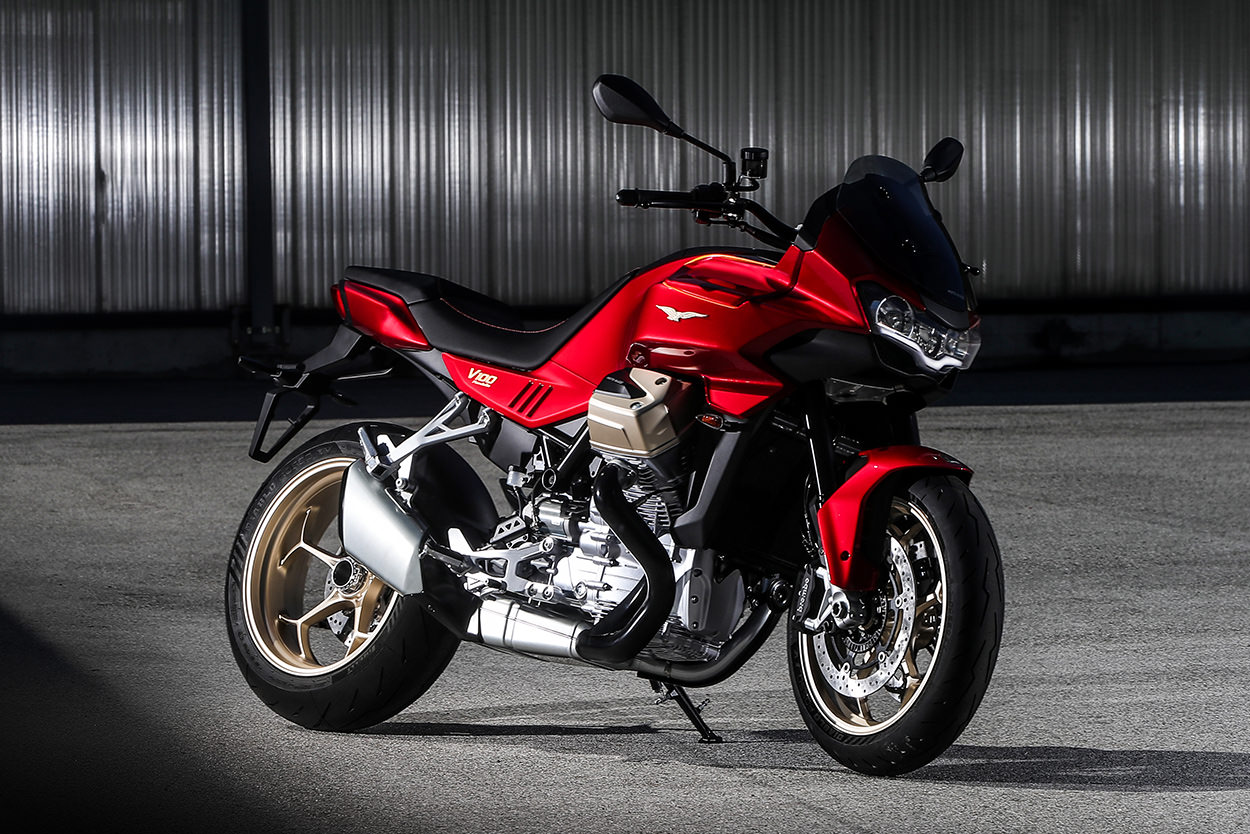 Moto Guzzi have revealed nothing more than images and a teaser video [below] that desperately wants to remind you that the marque’s logo has an eagle in it. But there are a few dead giveaways and easy speculations. The engine looks to be all-new, with liquid cooling and an assumed capacity of 1,000 cc, and power is still directed via a shaft drive. 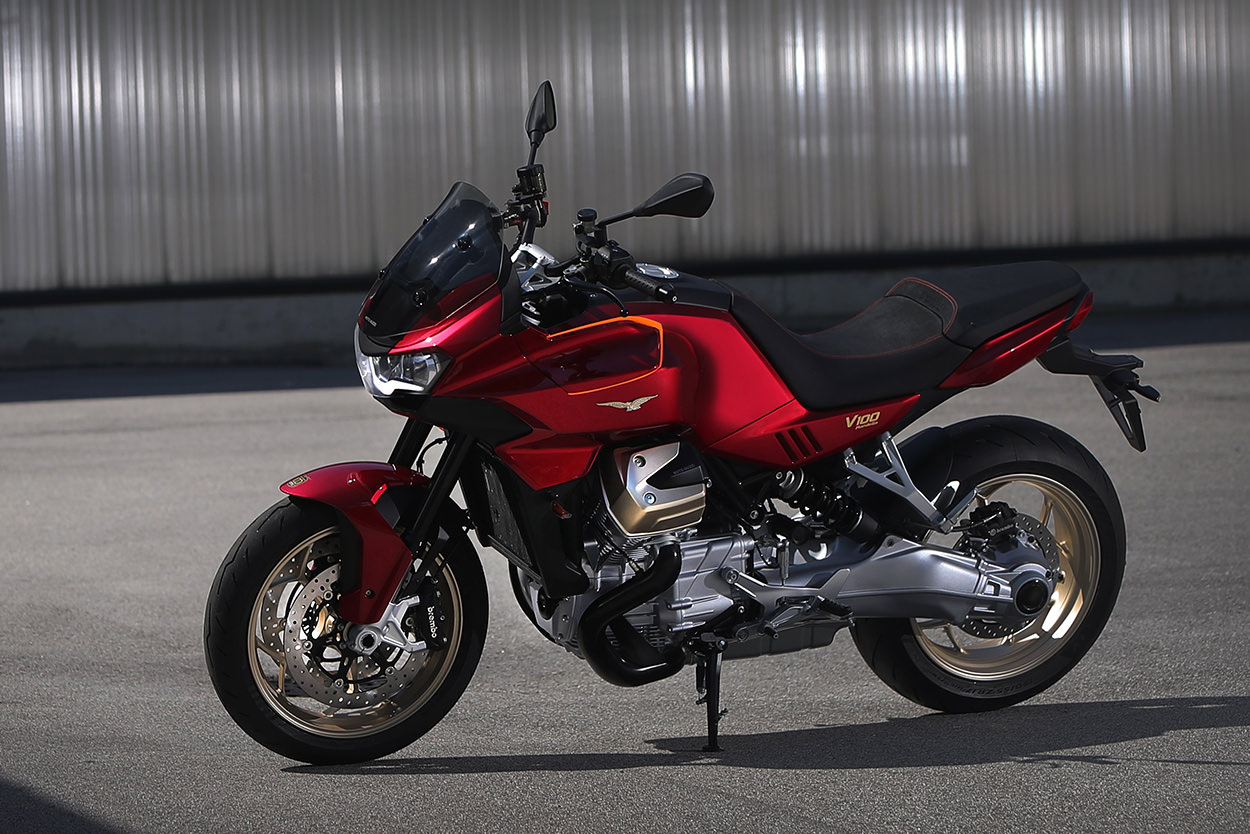 The video also reveals air channels on the fairing that open and close, and a windshield that moves up and down. It’s not clear whether these will operate automatically or not, but we’ve seen the term “active aerodynamics” bandied about, so make of it what you will.

Guzzi specialists Classic Co. either have inside info or are master speculators. They’ve pointed out a large airbox where the tank would go, an under seat fuel tank, and a four-valve-per-cylinder engine layout that can be bumped to 1,300 cc and used in a wide variety of applications. They’ve also cleverly noticed that the air intakes sit above the cylinder heads, and the exhaust ports below, unlike Guzzi’s current V-twins. 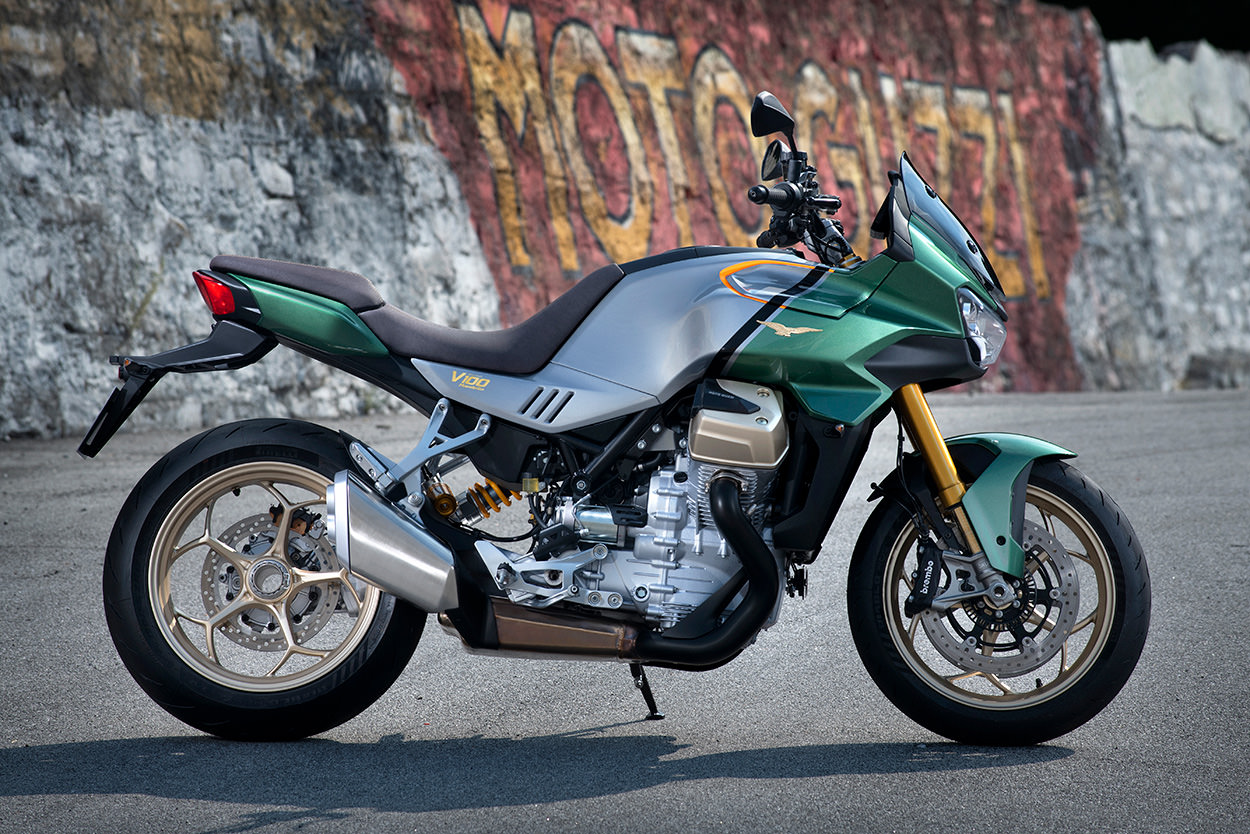 Looking at the red and green bikes that Guzzi have shown, it’s also clear that the V100 Mandello will most likely come in two models. Both are sporting Brembo brakes, but the green version [above] also has Öhlins suspension at both ends.

Overall, we’re digging the slightly 80s aesthetic, and it looks like it’d be a fun ride—as long as it delivers enough power in a decent weight class. Color us curious. [Moto Guzzi]