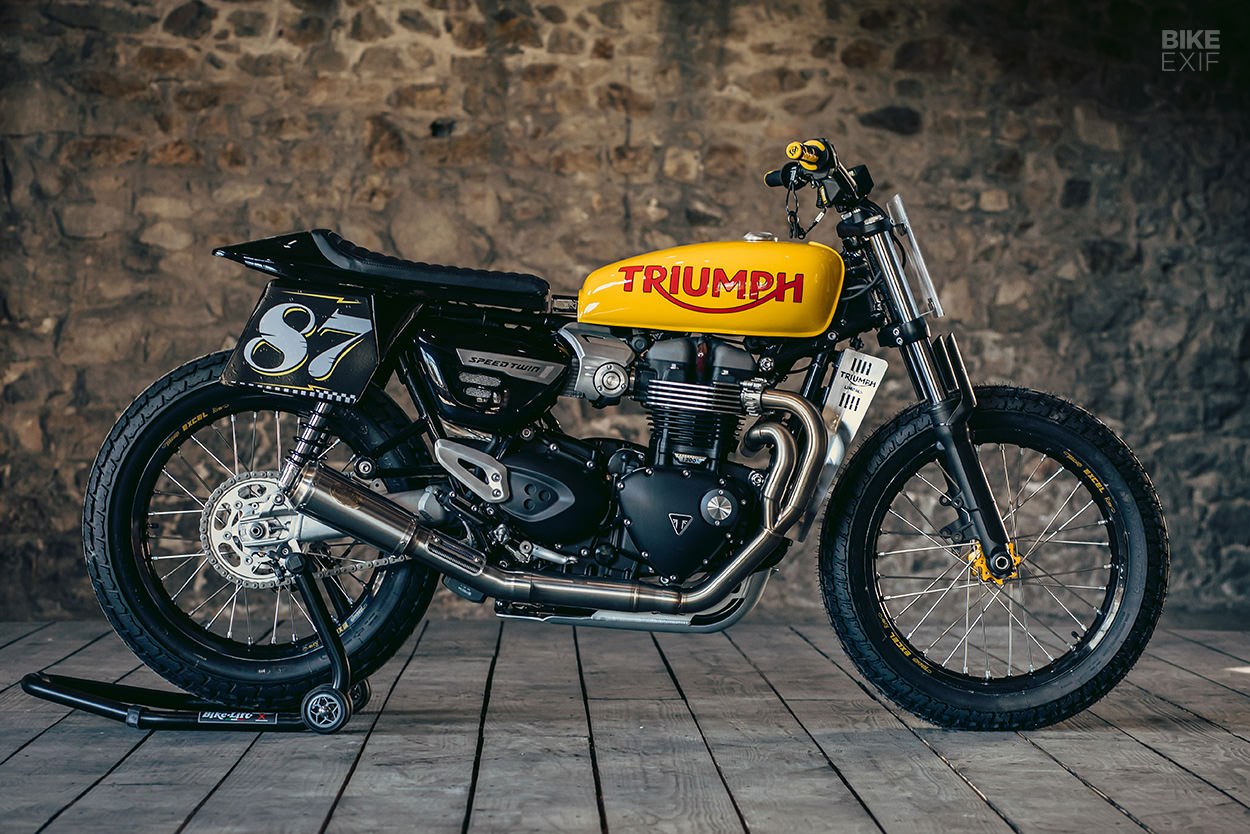 Triumph France is about to throw the wraps off a new custom build-off contest for dealers, and we’ve got a sneak peek at one of the entries. Built by Triumph Limoges, it’s a flat tracker based on the 1,200 cc Speed Twin. And it’s set the bar extremely high.

Remarkably, shop boss Nicolas Ginouves is new to the brand; Triumph Limoges has only been operating for four months. But he’s got almost two decades of bike dealership experience, and has tasted build-off victory before. And his workshop manager Denis used to be the technician on a championship-winning endurance racing team. 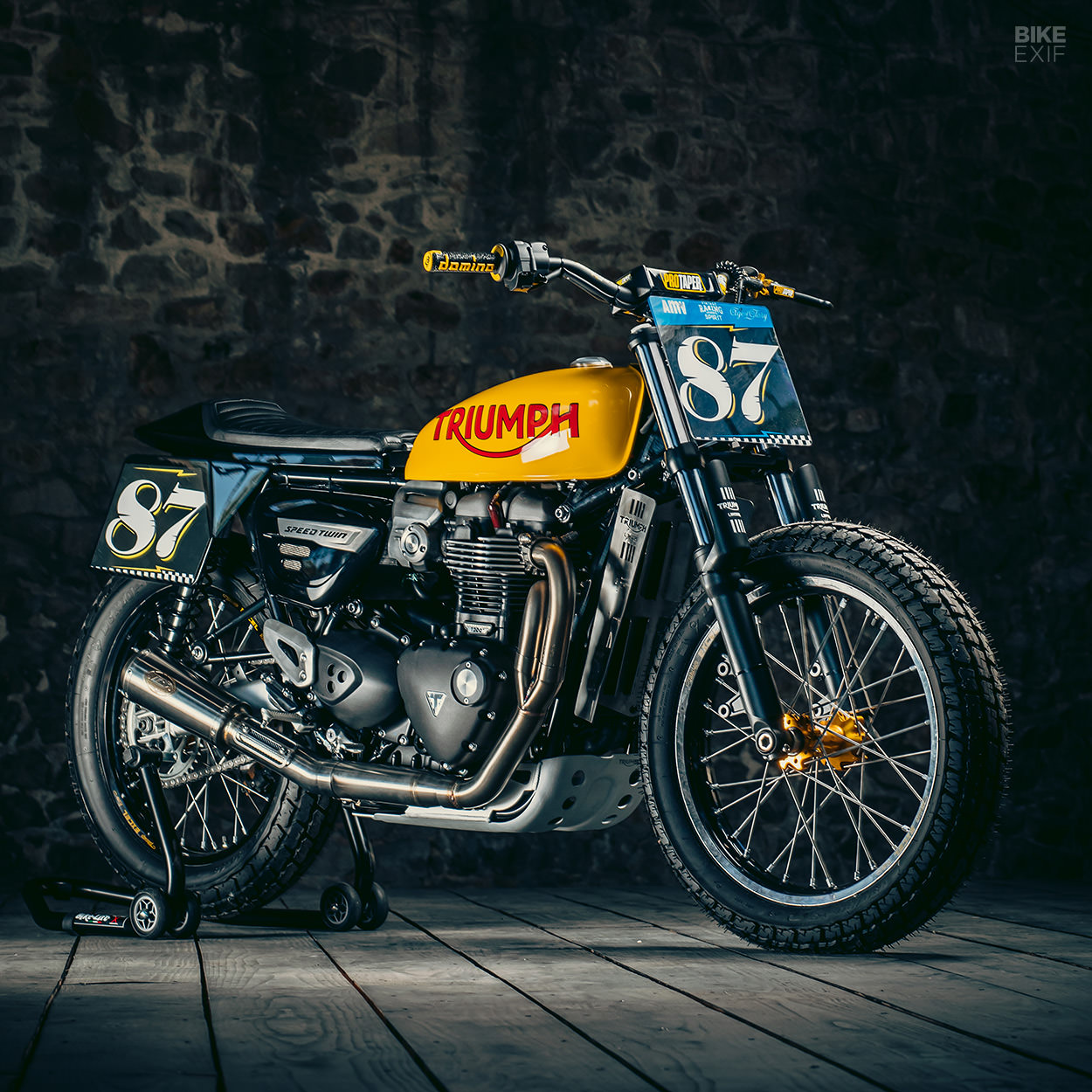 The shop picked the Triumph Speed Twin because they had to (it’s in the rules), but decided to turn it into a flat tracker because they wanted to. Flat track racing is enjoying exponential growth in Europe right now, and the Triumph Limoges crew are fans.

“For decades we have been admiring the pictures and videos coming from the other side of the Atlantic,” says Nicolas. “Of riders, wheel to wheel, chasing each other on dirt ovals, and without a front brake. The motorcycle race par excellence, the absolute holy grail of riding, the show in its purest state… the flat track!” 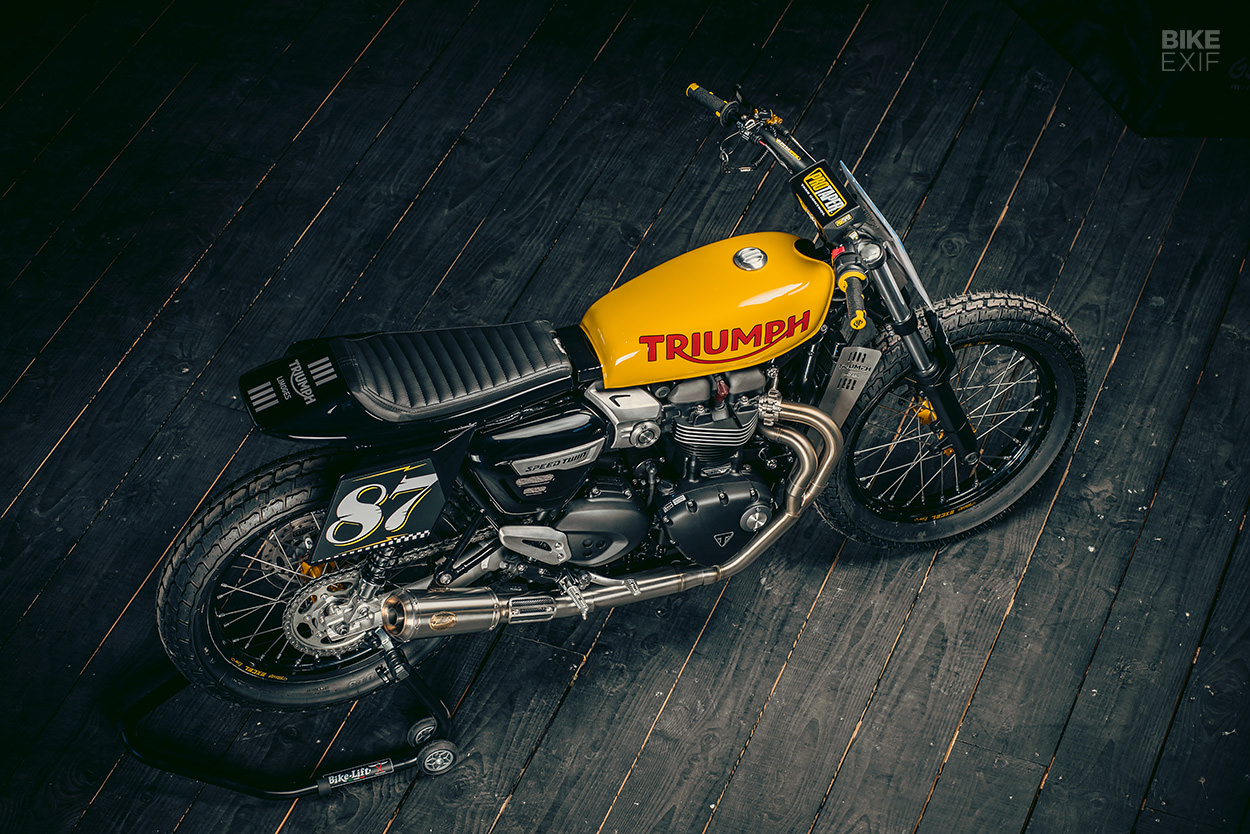 Inspiration hit hard at the end of last year, when the team attended a race day at the Marmande grass track near Bordeaux. Their eyes were drawn to a yellow 1967-model Triumph TR6 flat tracker, belonging to racer and enthusiast Cristophe Canitrot. When Triumph France asked them shortly after to take part in the build-off, they immediately knew they wanted to build a modern homage to Cristophe’s bike.

Nicolas and co. wanted a bike pretty enough to win the competition, but rowdy enough for hooligan racing. With 96 hp and 112 Nm on tap, and a desire for maximum reliability, they decided to leave the motor alone. But there was a lot of other work to be done. 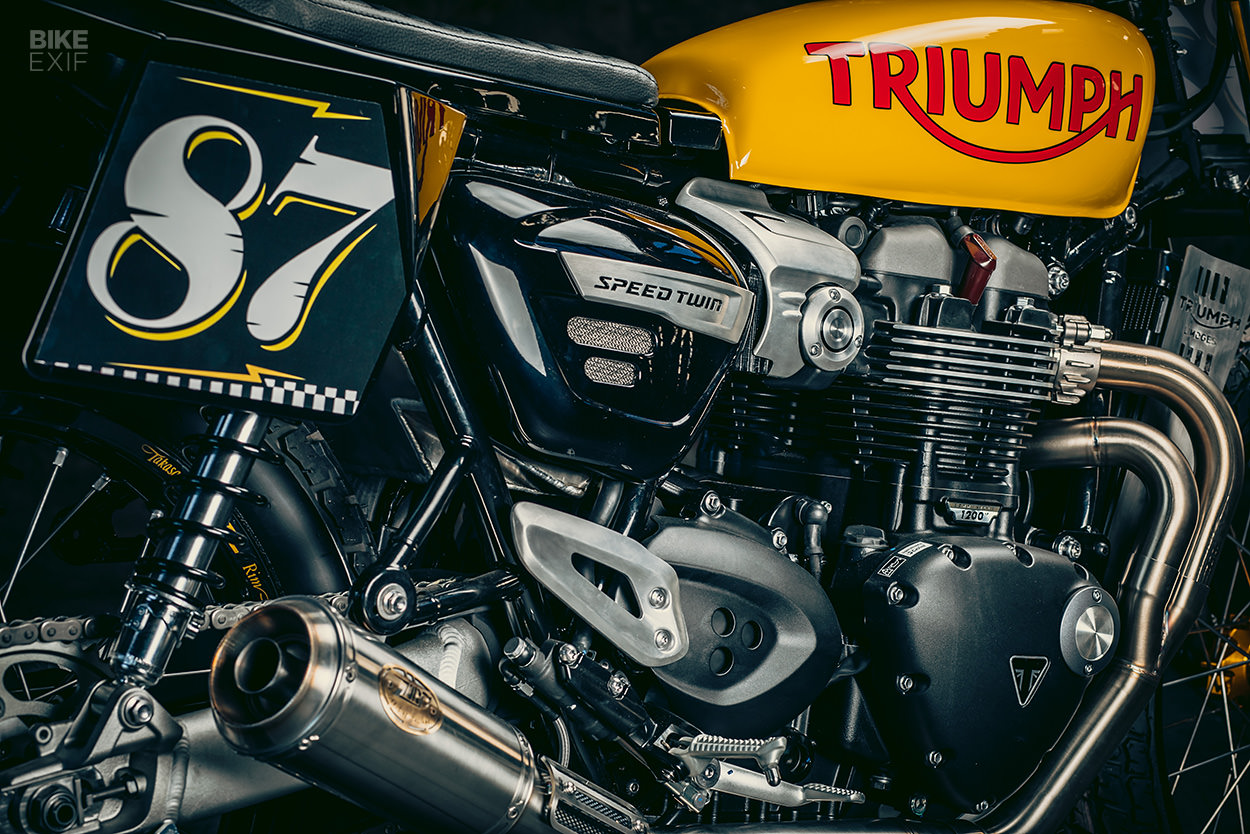 The shop started by ditching all of the Speed Twin’s street legal bits and its front brake. Then they hit a roadblock: the bike can’t run without its speedo plugged in. They also wanted to swap out the fuel tank, which meant faffing with the OEM fuel pump—so Denis figured out a ingenious Tetris move to kill two birds with one stone.

Fuel now sits in an aluminum reservoir under the seat, with the pump attached to a specially designed mounting plate. It took 48 hours to design the fuel cell alone, with Denis building cardboard mockups before working on the final part. The air box had to go, so there’s now a 3D-printed support that holds the air filter. 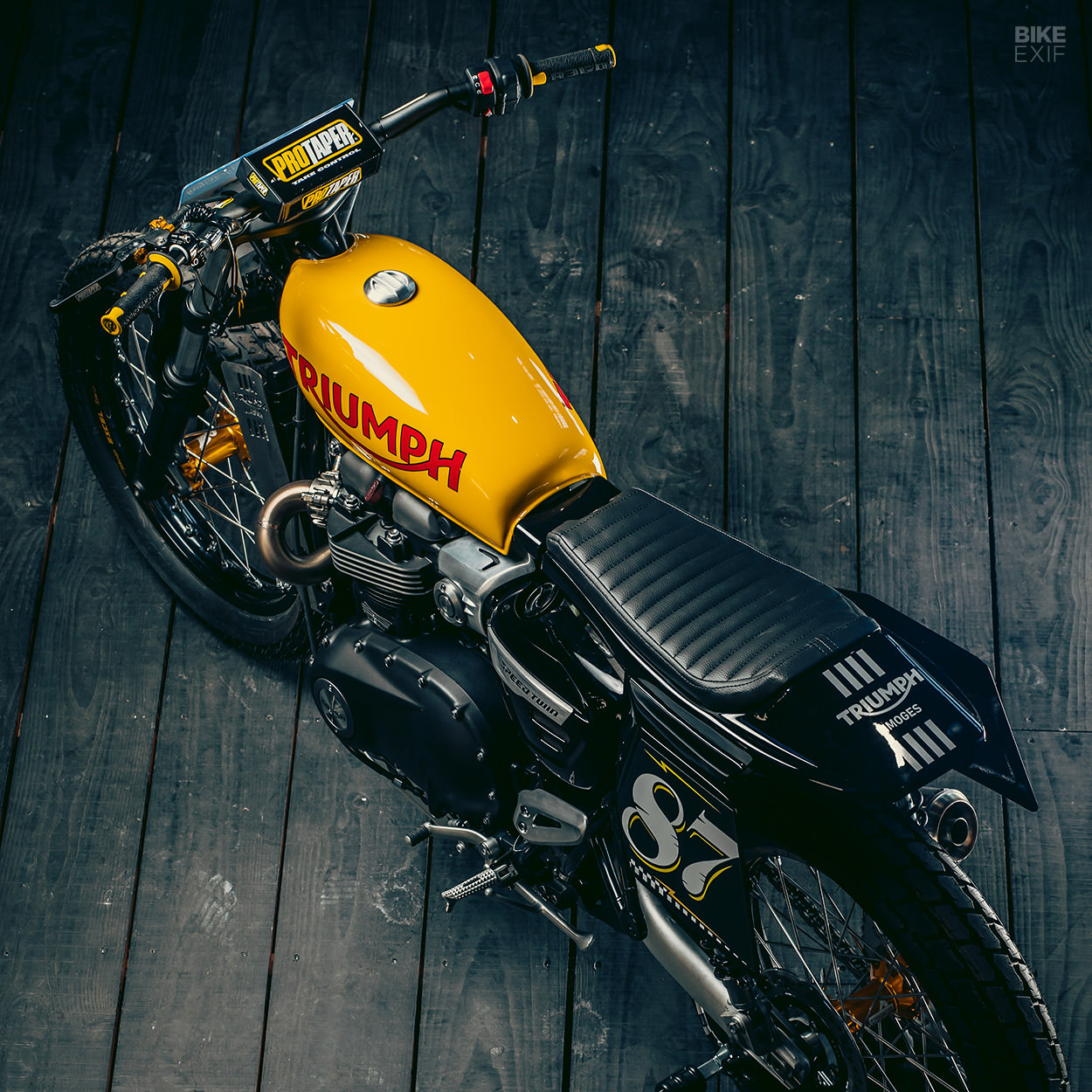 Up top is a vintage repro flat track tank that was ordered online, before having its belly lopped off to turn it into a glorified cover. It hides—you guessed it—the original speedo, remounted on custom brackets. The OEM key ignition is in there too, accessible via the ‘gas cap.’

Just behind the faux tank is an off-the-shelf flat track tailpiece, with a set of handmade aluminum number boards riveted to it. Other bodywork includes a set of hand-made radiator guards, and a bash plate straight out of the Triumph aftermarket catalog.

The wheels are flat track-specific 19” numbers, with Excel rims and Dunlop DT3 tires. (Squeezing a 19” wheel into the swingarm reportedly took some wizardry, but it’s worked.) Triumph Limoges left the suspension alone for now, because they want to race the bike first before figuring out what they want to fettle.

As with most flat track builds, the control area is all business. The crew installed a set of burly 28 mm race bars and risers from ProTaper, along with an adjustable clutch lever and Domino grips. The only switches are the kill switch and starter cluster, and a tethered cutout to comply with race regulations. 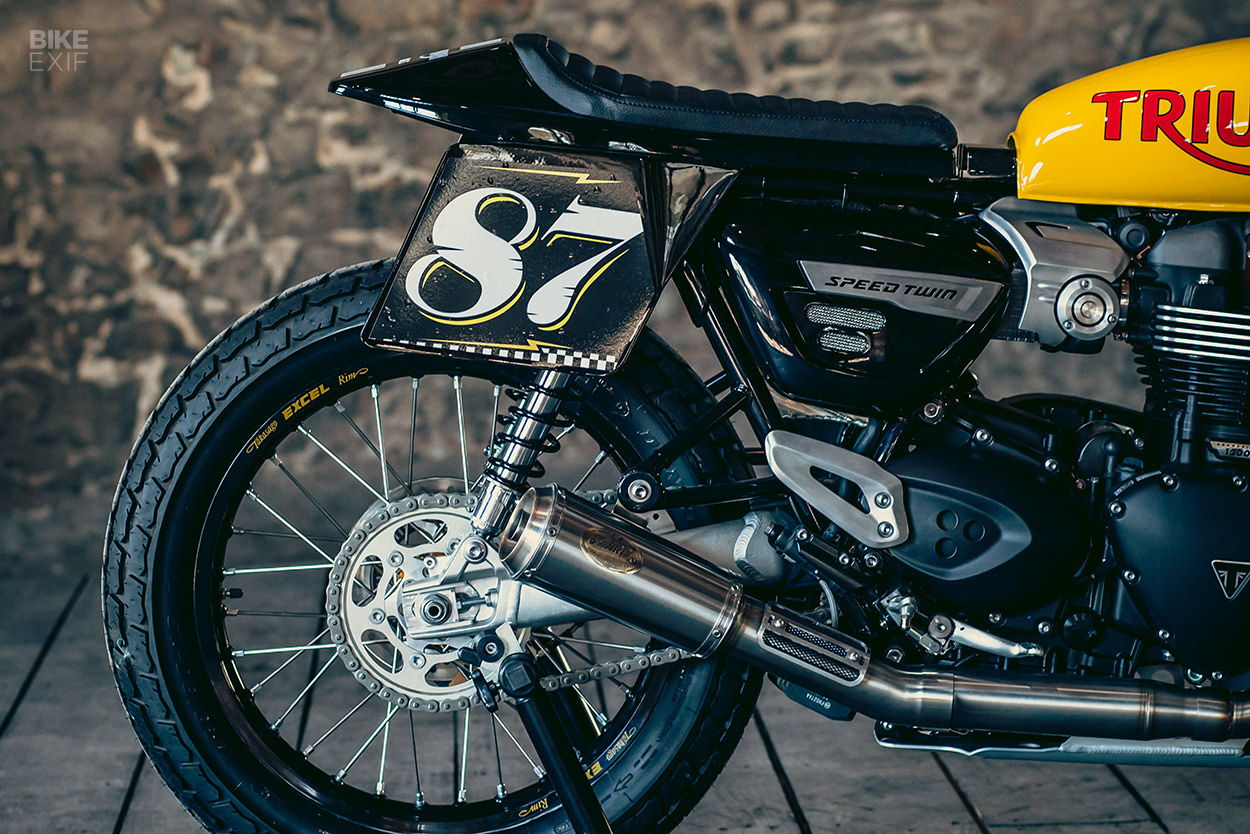 Settling on a livery was easy: the tank wears a simple coat of yellow, with a red Triumph logo, just like Cristoph’s TR6. Carrosserie du Lac and L’atelier de la Pub both worked on the tank, and Vintage Racing Spirit supplied the vinyls for the number boards. 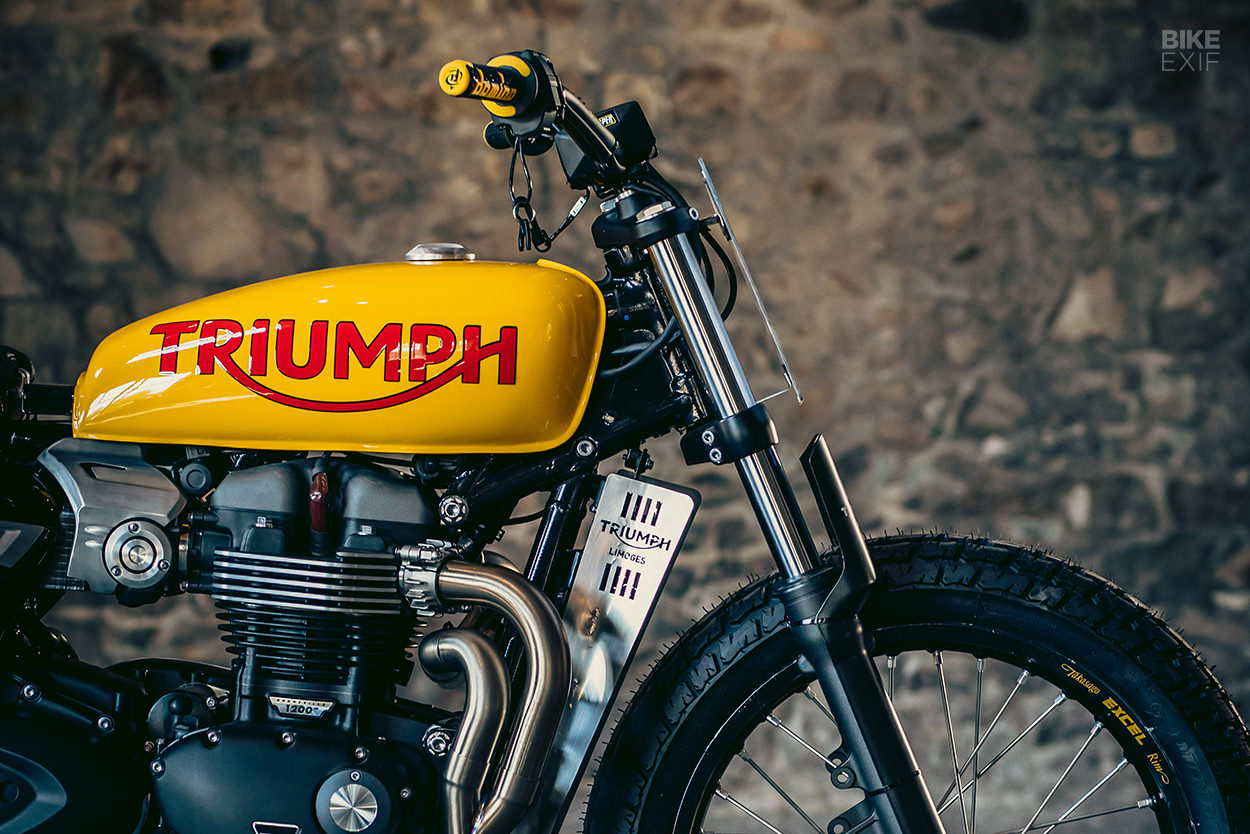 Stoked on their creation, Triumph Limoges sent photos of the bike over to Cristophe, who gave his stamp of approval. “Now we just have to wait for the verdict of the Speed Twin Project contest,” says Nicolas, “but we’re waiting even more for the opening of the French Flat Track championship to go and titillate the other competitors.” 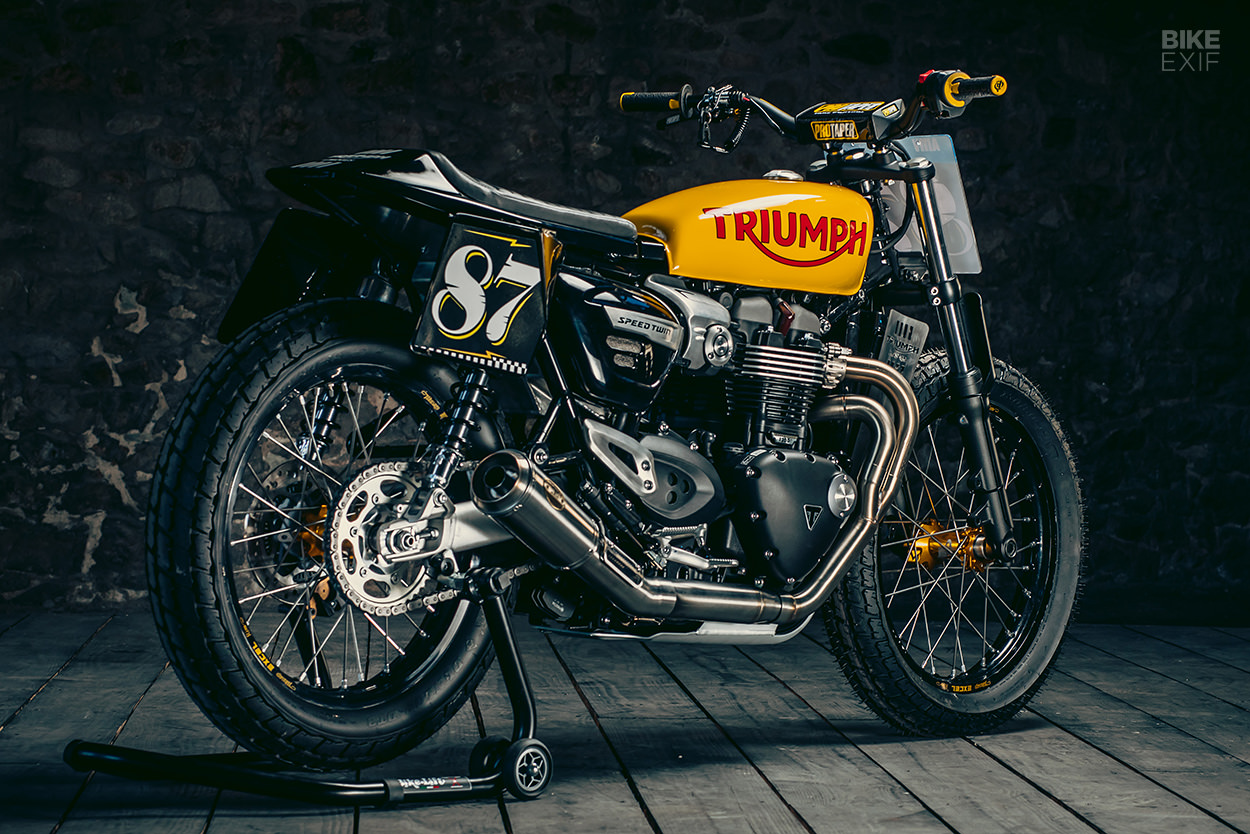