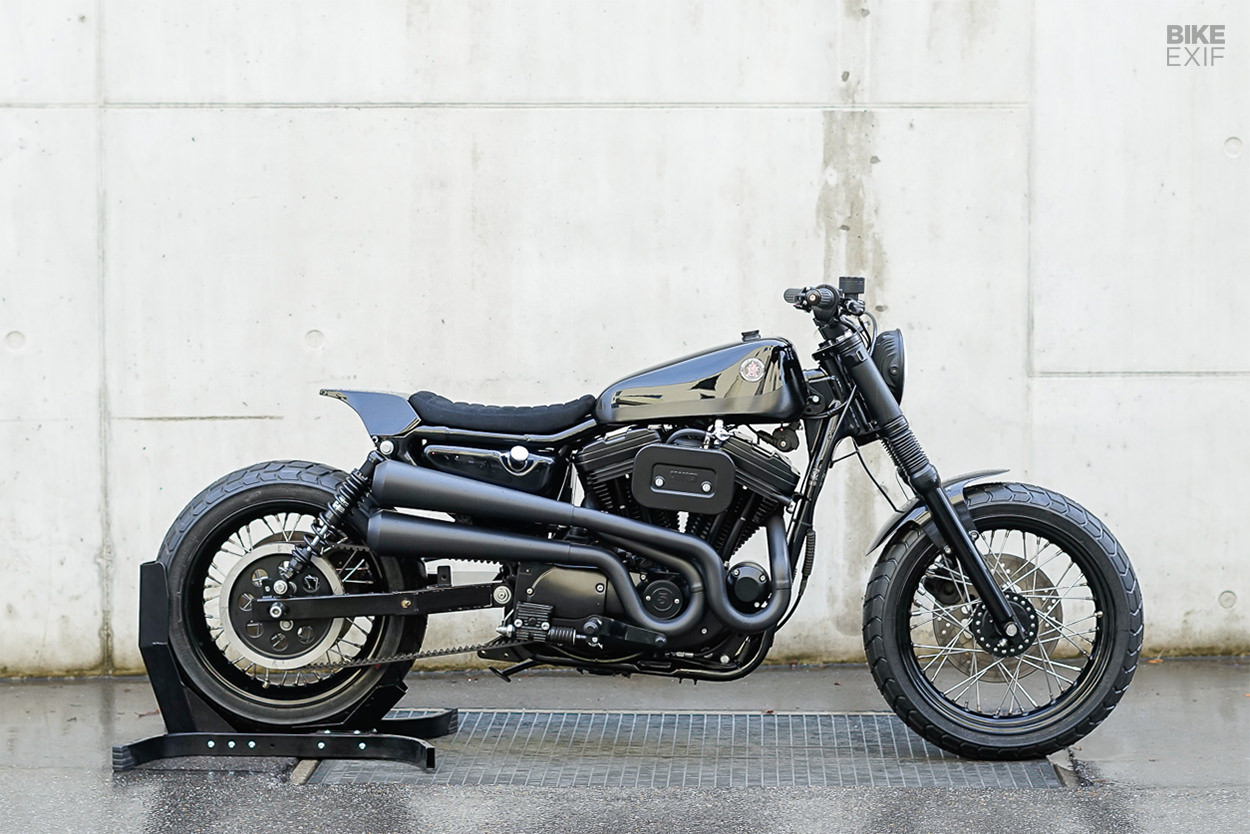 Crooked Motorcycles is a name worth watching on the custom scene in Europe. Just a couple of months ago, they impressed us with a crisp BMW K100 build that avoided the cookie-cutter ‘flying brick’ vibe. And they’ve now just released details of this intriguing Sportster street tracker.

You don’t often hear adjectives like ‘sleek’ or ‘sharp edged’ associated with the lovably chubby Sportster, but Crooked have absolutely transformed the V-twin icon. 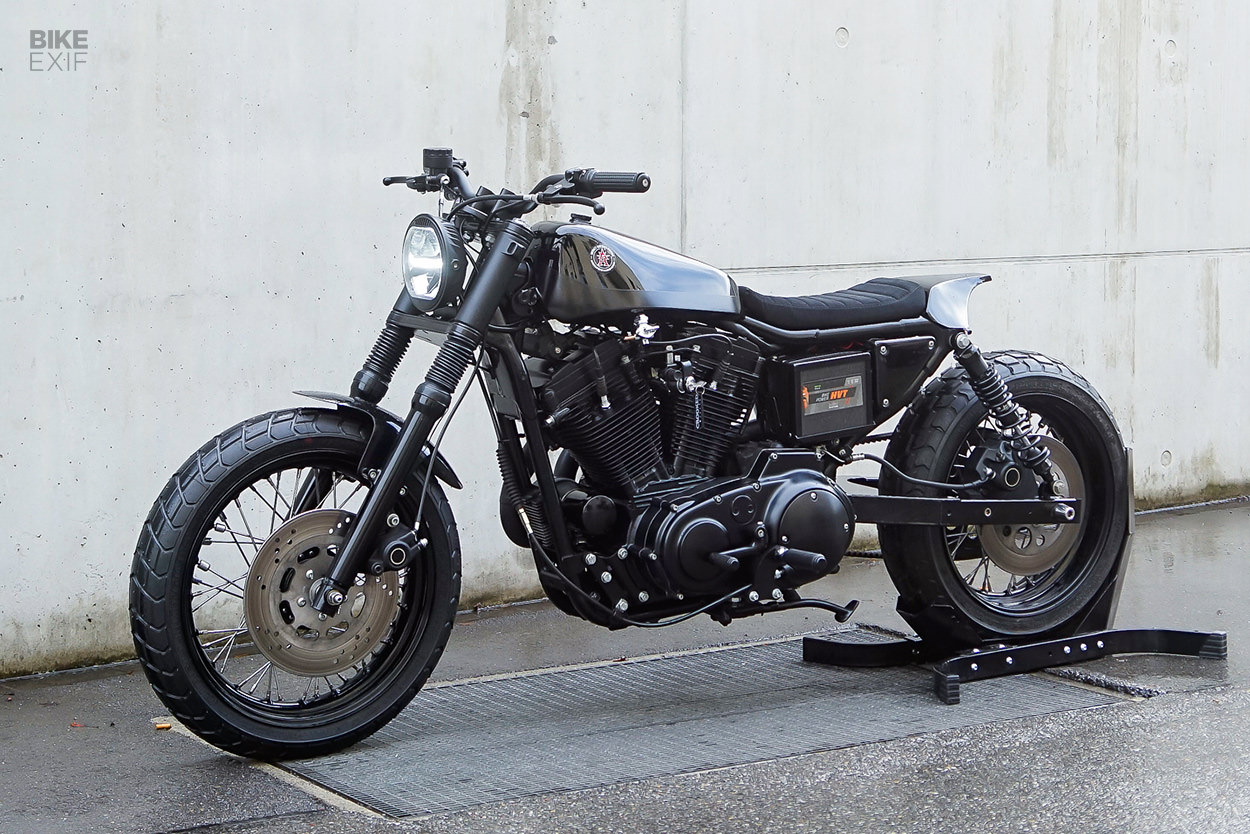 Workshop founders Dominikus Braun and Jakob Müller have known each other since childhood times, when they zoomed around local fields on XT250s.

They started building customs together in 2015, and after a three-month odyssey around north Africa, formally set up the company in 2018. A third member of the crew, Anh, works part-time on the graphic design front. 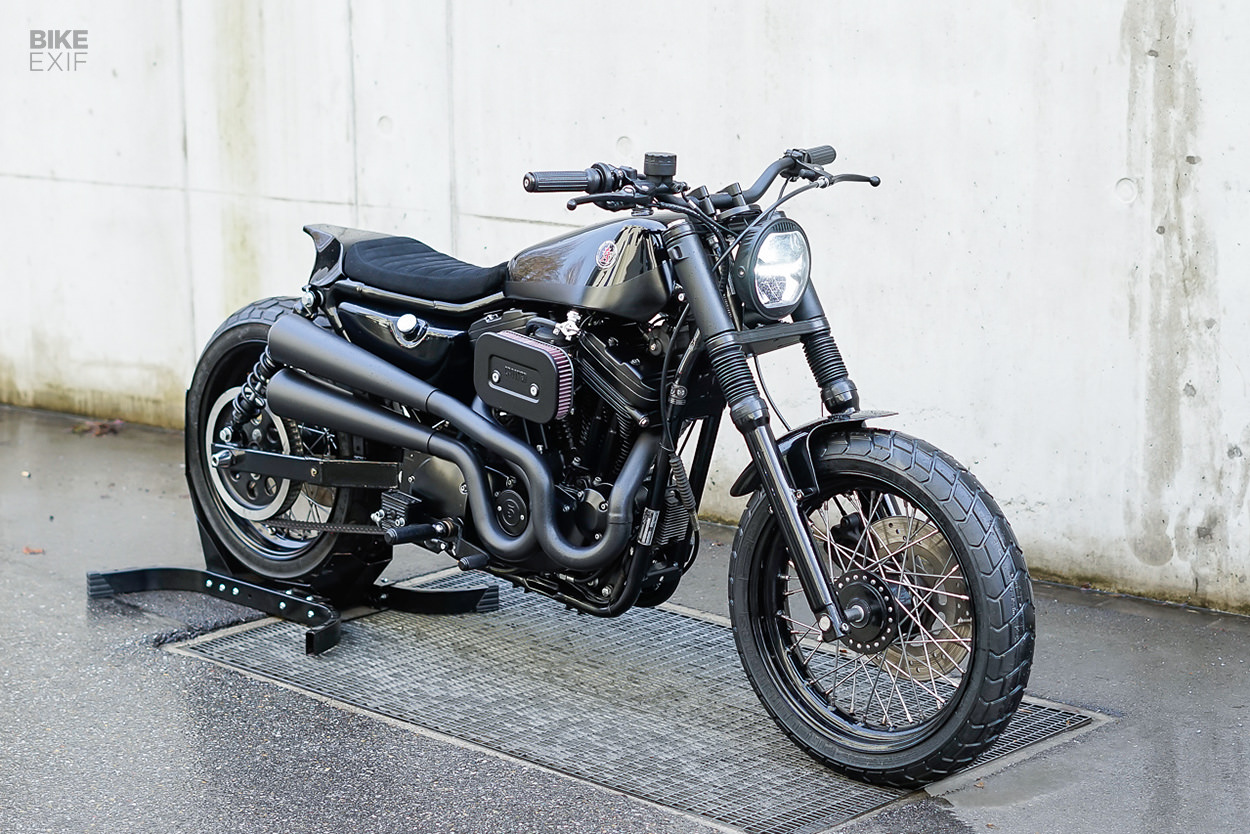 ‘Umbra’—meaning shadow—is based on an XL883 Hugger from 1995, a lesser-known Sportster variant that later became the ‘Low’ model. The compact ergonomics came from a different seat shape, shocks and bar setup.

The commission arrived from the founder of the battery company Intact, which has a high profile in Germany. He already owned the Sportster, and like Crooked, is based in Memmingen—a city about a hundred kilometers west of Munich. 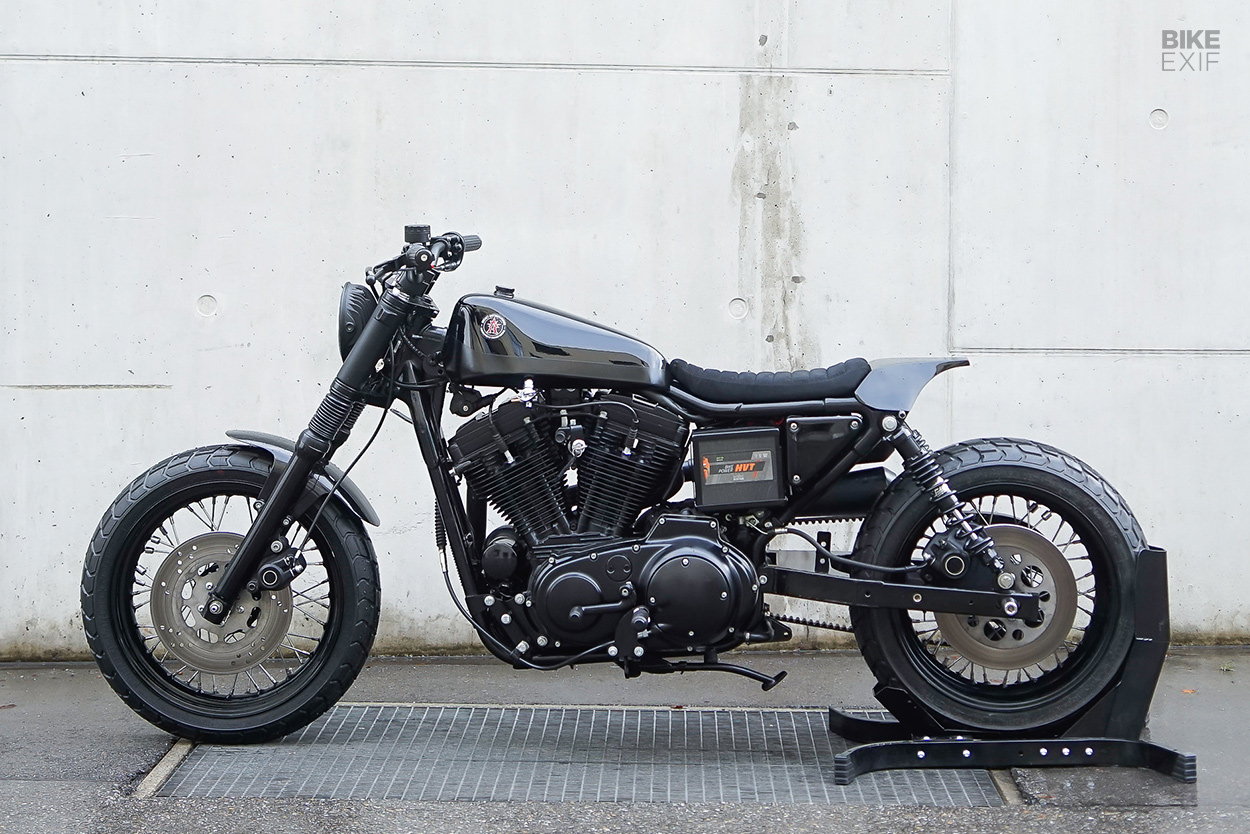 “The client brief was to use different layers of black, and present the battery in style,” says Dominikus.

Visually, a stock Sportster obviously has little in common with the typical street tracker silhouette, so the Crooked team knew that they’d need to change the stance. And they weren’t put off by the fact it was the first time they’d worked on a Harley. 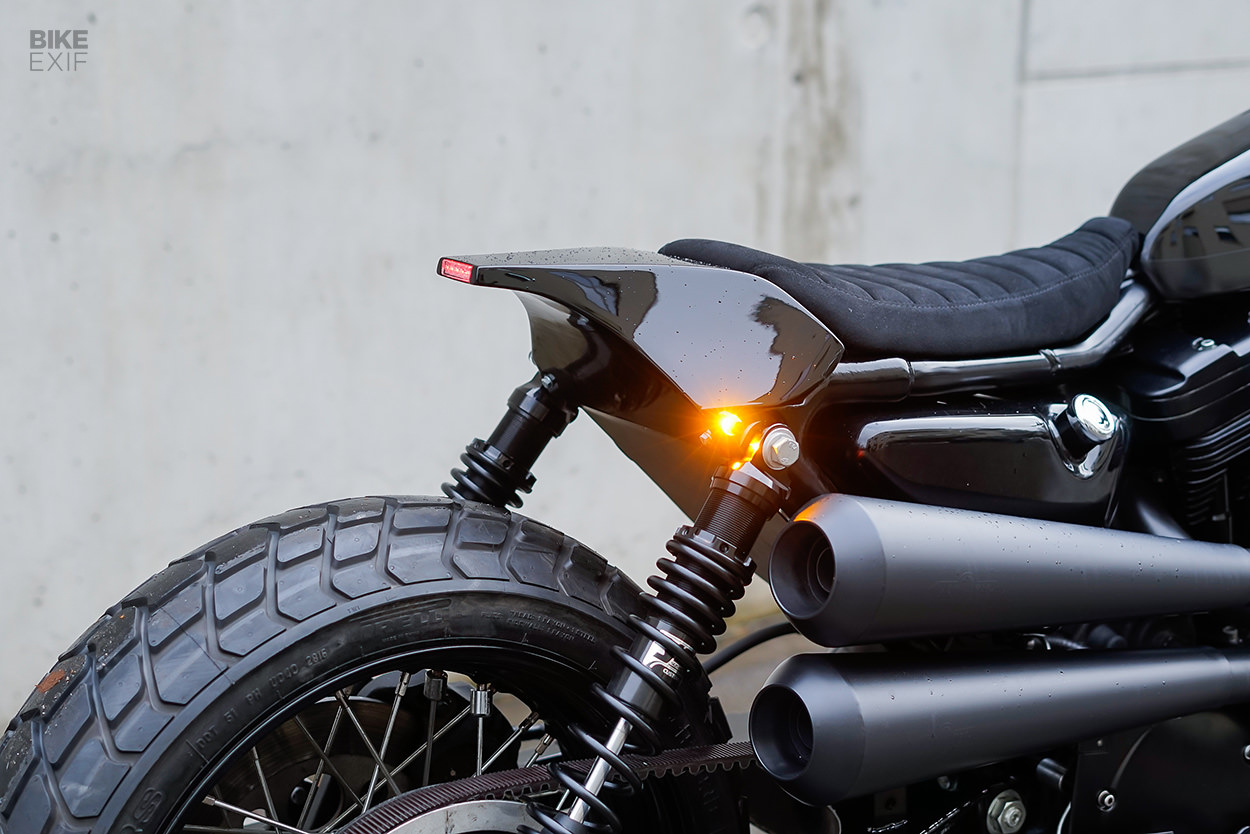 “At the rear, we love the shape of bikes that end up ‘super thin’,” says Dominikus. “So we used a built-in LED taillight as the size guide, and built the tail unit around that.” The very neat seat pad is upholstered in Alcantara. 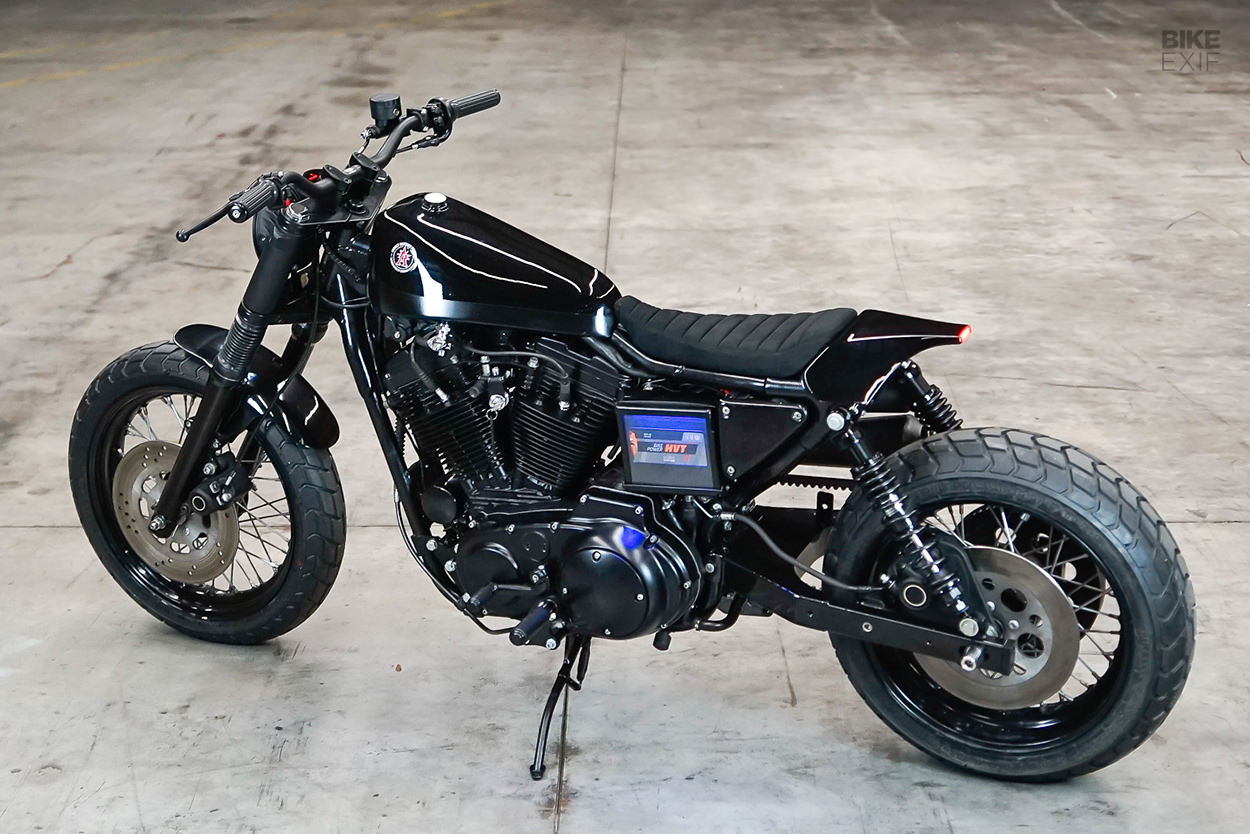 Right below is the custom-made battery box, which makes no attempt to hide its contents: the outer cover is made from Plexiglas. It’s the opposite approach to most customs—which attempt to hide the battery—but it doesn’t jar with the overall style. There’s even subtle LED lighting to highlight the battery, which is Intact’s super-robust HVT model.

The juice feeds into a Motogadget motoscope pro instrument and mo.blaze indicators—with the ubiquitous German tech company also supplying the grips, fitted to LSL handlebars. The headlight is a Gazzini LED unit, since the client wanted to keep a round light at the front rather than follow the typical number-board-with-inset-LEDs trend. 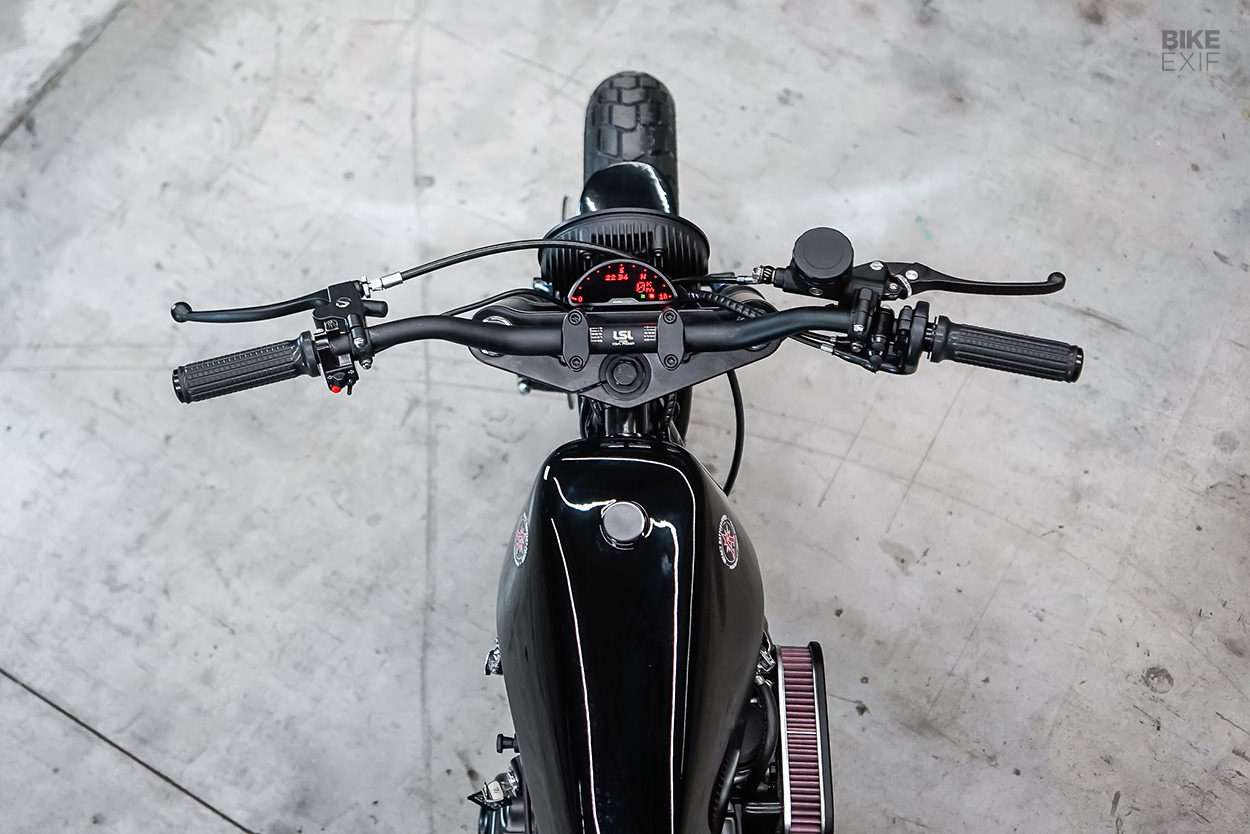 The tank is hand-made, and sits nice and low. “The stock tank was way too ugly, so we searched for an aftermarket tank. But after a long search, we didn’t find anything. This is our first complete, handcrafted custom tank, and we are more than stoked about the result.”

The engine breathing gets an upgrade with a new 3D printed carbon fiber reinforced intake holder, and a custom, ceramic-coated exhaust system topped off with mufflers made by Hattech. 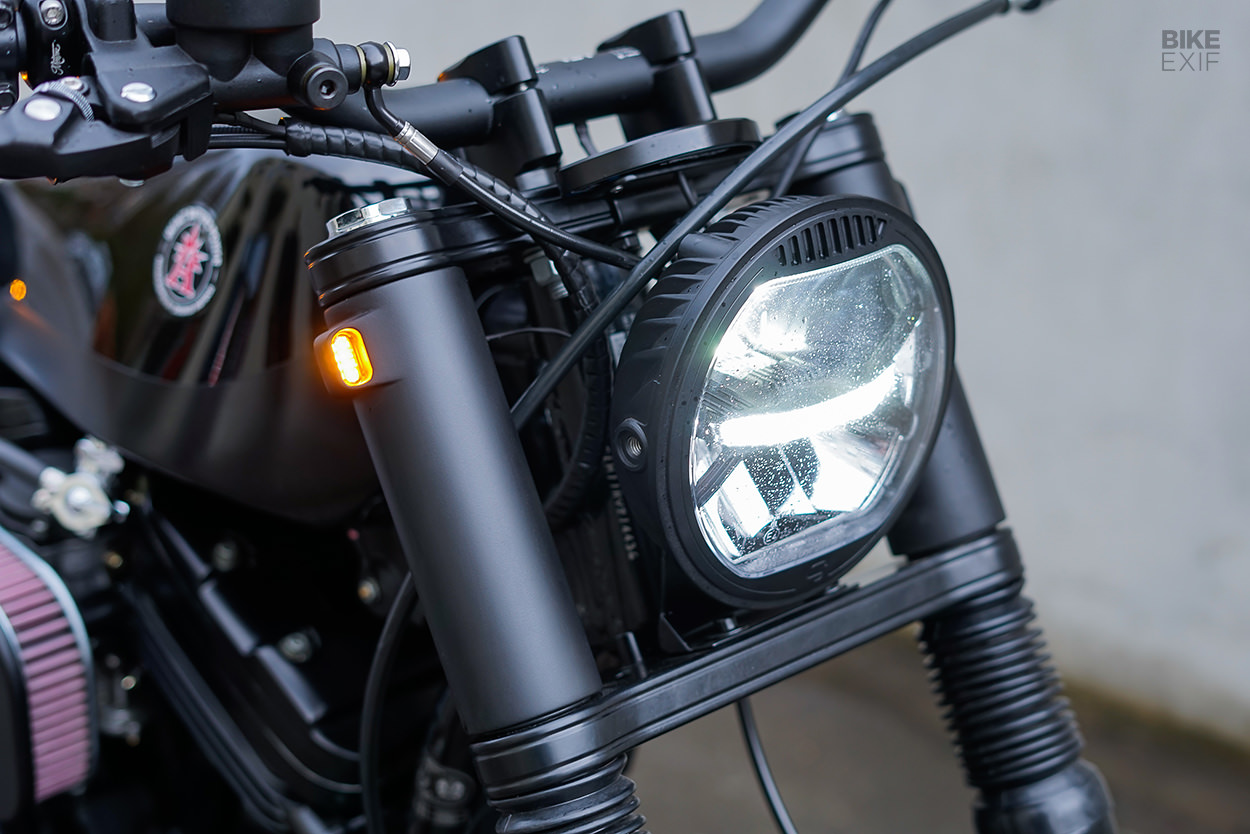 It matches the extensive powder coating almost everywhere else, from the engine covers to the frame and even the forks. Crooked have turned to 3D printing for the blacked-out fork covers too, which incorporate discreet turn signals. All the 3D printed parts were made for Crooked by another German outfit, Motoism.

Shod with a fresh set of Pirelli MT60 RS tires, this Sportster tracker is a million kilometers away from the donor bike—and all the better for it. Straight up excellent work. 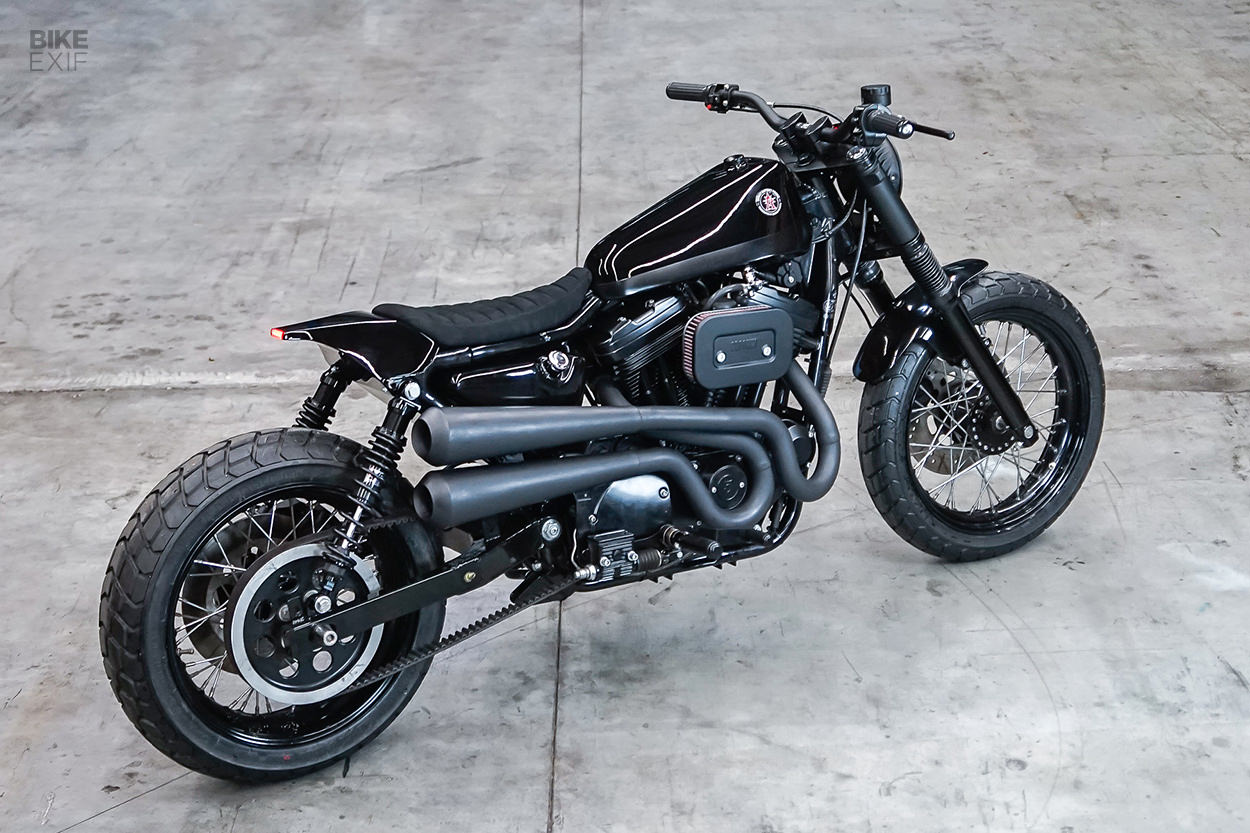